William Seward Martha Vandewall and the bust of Alexander Pope

The following notes were compiled to place the Vandewall family in 18th Century society and to show that they were a very rich and cultured but also perhaps self effacing Quakers. Martha Vandewall was the owner of the bust of Pope before William Seward.
Brief biographical details of the Vandewall Family in the Eighteenth Century, with particular reference to Samuel Vandewall (1719 -1761), and his wife Martha Vandewall (1711 - 1794), ne Barrow, formerly Mrs Harris Neate (1714 - 1742) and her son Thomas Neate. These people were all Quakers.


Eighteenth century Vandewall family information from a typescript manuscript by JJ Green at the Quaker Records at Euston Road, London.

The Vandewalls arrived in England from Holland some time in the late Sixteenth Century.

1679. John Vandewall I of Harwich marries Susannah Cottisford. c.1684, perhaps related "The Frankford Company" had become the purchasers of a large tract of about 25,000 acres of land in Pennsylvania, part of which was already located by Jacob Vandewall, and most likely had their agents scattered through Germany to induce young and active men to emigrate thither with their families. On Holmes' Map may be seen the following inscription: "Germantown - Jacob Vandewall and Company." It does not appear who this Jacob Vandewall was, but as the mother of Wigard Levering another Dutch Quaker settler in Pennsylvania, was called Elizabeth Vandewall, he was perhaps a relative who had become interested in this great land speculation.


1705. Marriage of Thomas Neate of the City of Bristol, merchant to Love Harris, daughter of Nathaniel Harris at Chippenham.

1730. Death of John Vandewall II. His executors are Sylvanus Bevan, FRS, Apothecary of 2 Plough Court, Lombard Street, London. Thomas Goldeny of Clifton, Bristol (of Goldney Grotto fame) and Joseph Moore of London ( the father of his wife). His estate is left in trust for his children. Joseph Moore (d. 1740) was the owner of the Copperas Works at Greenwich, which later belonged to Sam.Vandewall and then his stepson Thomas Neate. When Moore died he was worth over £30,000.

The Copperas industry consisted of turning nodules of copperas ( bisulphide of iron) into green copperas or green vitriol ( ferrous sulphate of iron). Green copperas was used for amongst other things, the dyeing of cloth and leather black, and the manufacture of black ink. This industry seems to have been a virtual Quaker monopoly at this time.


Perhaps not a coincidence, Sylvanus Bevan, was an apothecary of No 2, Plough Court, Lombard Street in 1715. The home of the Pope family until 1715. Alexander Pope was born at 2 Plough Court in 1685.

1733/4. Marriage of Harris Neate of the island of Jamaica, merchant, to Martha Barrow (later Vandewall) daughter of Jonathan Barrow of the County of Monmouth.

At about this time both Harris Neate and Samuel Vandewall had their portraits painted by George Knapton. These two portraits are still with the family. 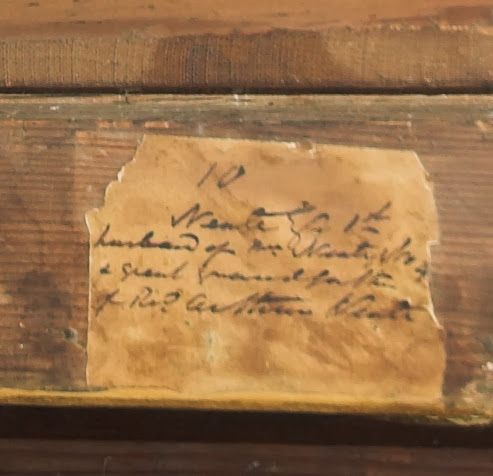 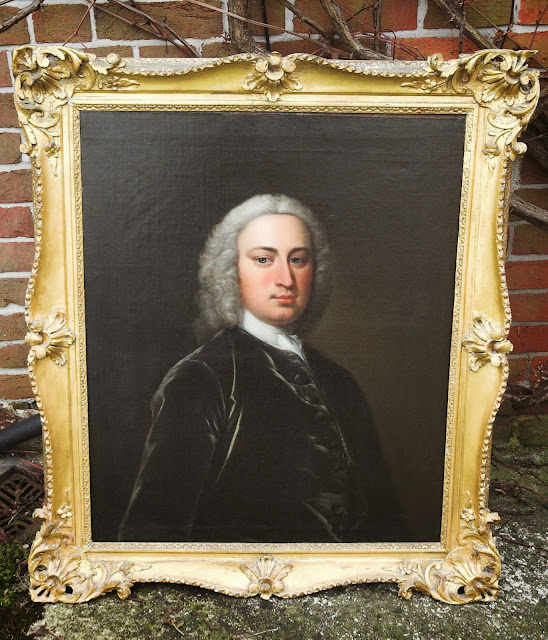 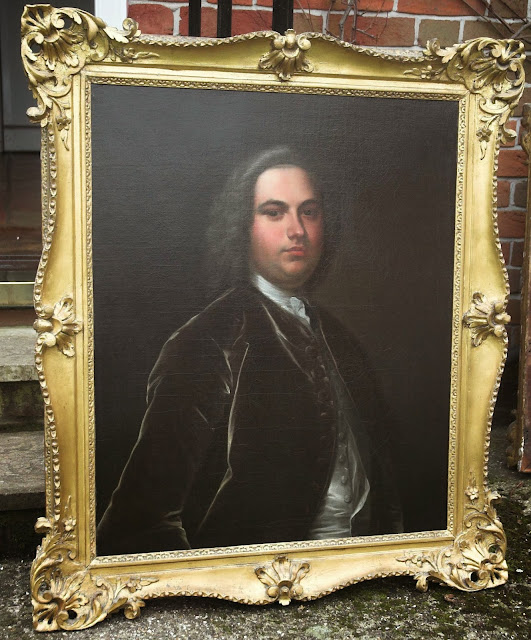 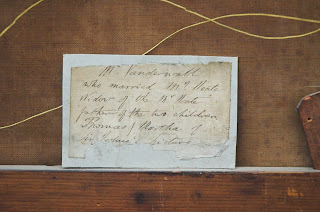 Portrait of Mrs Neate, of Donnington, Hampshire, half-length, in an embroidered silver shawl trimmed with fur, seated by a table with a spaniel her lap, in an interior, beside a polescreen,

By descent in the family of the sitter.

1742. Death of Harris Neate. Died of fever. Described as of Lawrence Pountney Hill. City of London. 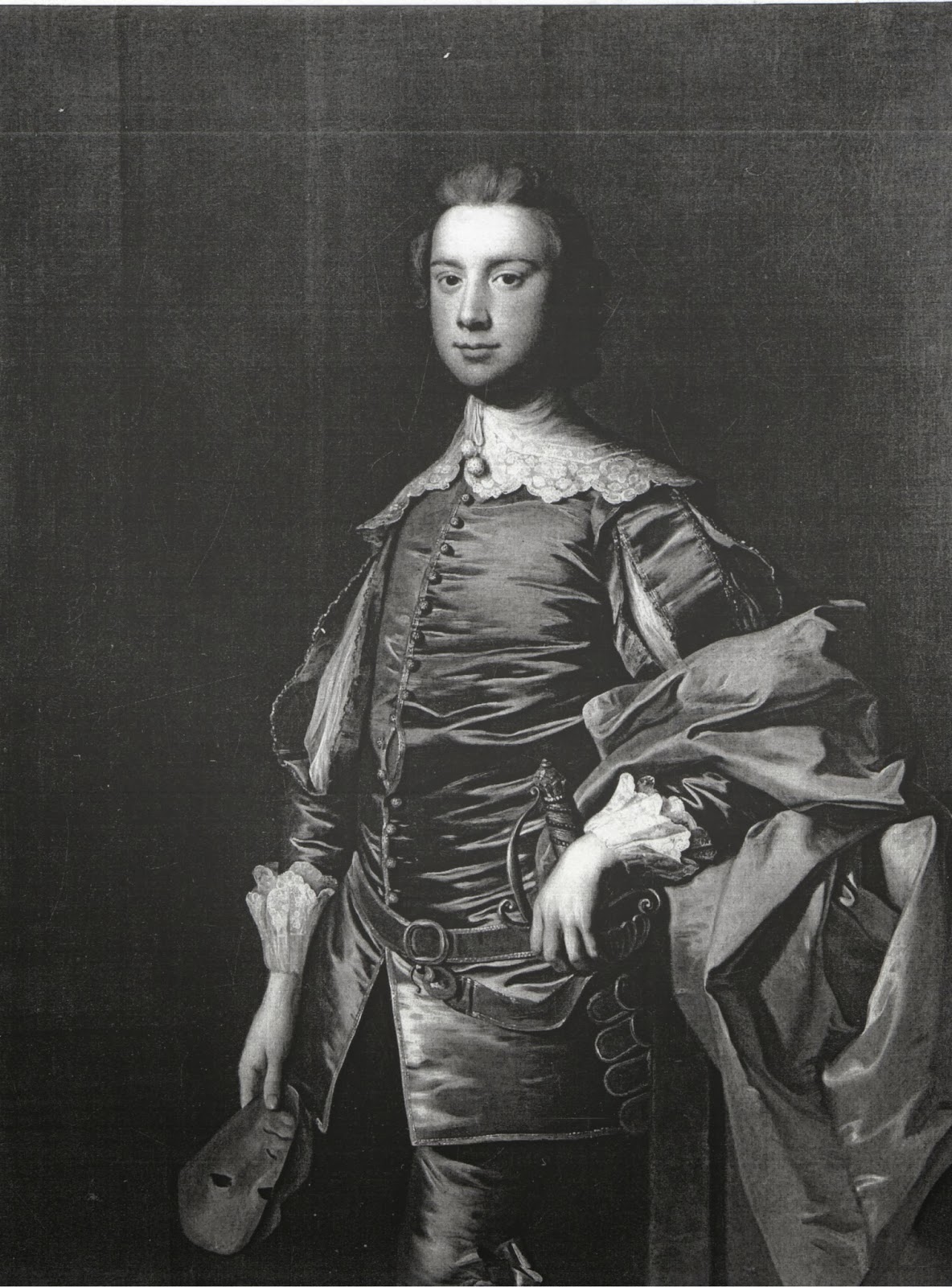 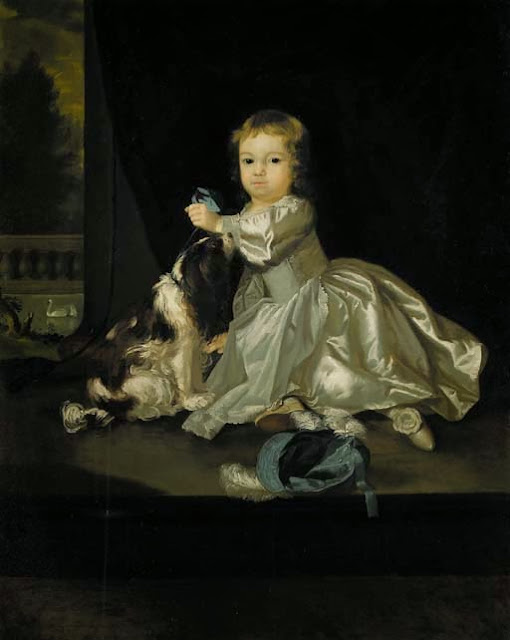 
1747. Death of Joseph Vandewall aged 2 ½. There is a portrait of him painted by Sir Joshua Reynolds (see British Pictures, Christies 15, April 1994).

1748. The portrait of Thomas Neate, his sister Martha and their Tutor Mr Needham is painted by Joshua Reynolds. 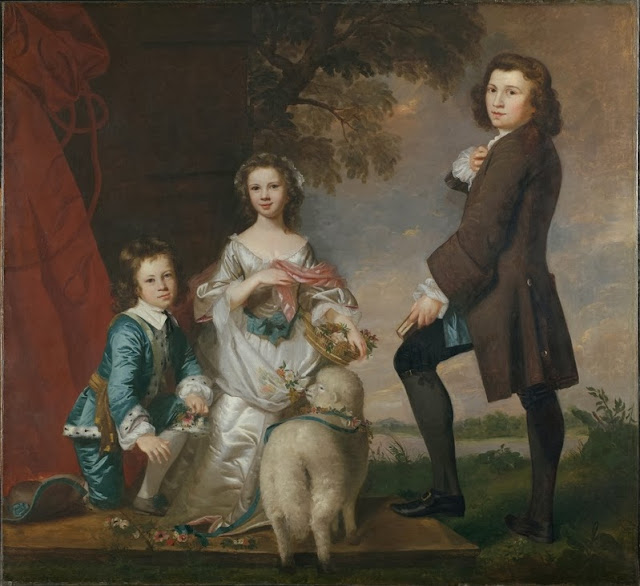 Her brother, Thomas, married Charlotte Seward in 1771 and they settled at Binfield, Their first child and heir was the Reverend Thomas Neate, born in 1775.

The tutor, Thomas Needham was a witness to the will of Martha's husband, John Williams, and was a beneficiary in Samuel Vandewall's will (National Archives, Public Record Office, Kew, Surrey, PROB 11/864 and 11/988;


Note. Originally one great house, the centrepiece of Arch Row, probably designed by Inigo Jones and put up for the gentleman speculator William Newton in 1638 - 41 (see Vitrouvios Britanicus for elevation and plans it was divided into two in 1751 and altered by Isaac Ware (who sat to Roubiliac in 1741.) These become 59 and 60 Lincolns Inn Fields. Other residents include the future Prime Minister Spencer Percival (1762 - 1812). The house still stands although much altered. Henry Shiffner M.P. an executor of Sam Vandewall’s will lived at 59 from 1752.

1753. Sam. Vandewall subscribes £5 to a fund for the suppression of Lawlessness at Blackheath. 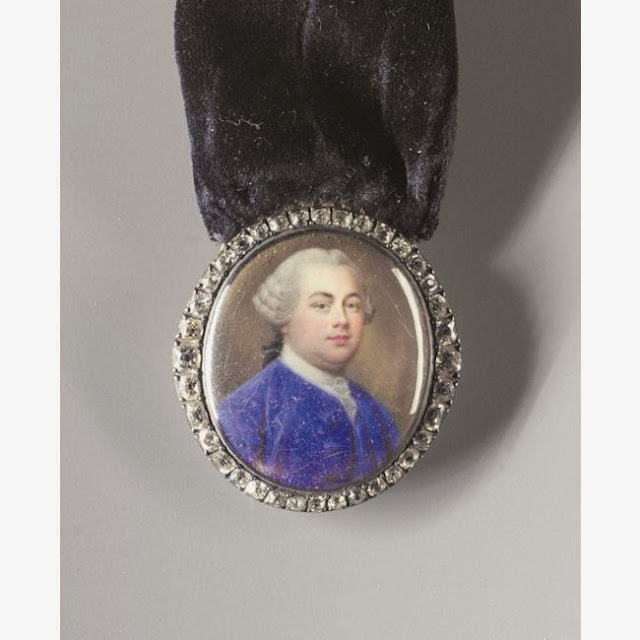 
The rest of his property he leaves in trust for Thomas and Martha Neate and four other relatives. 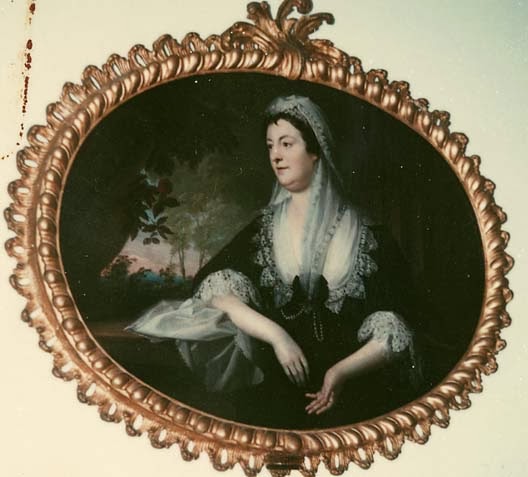 
C.1770. Both Thomas Neate and Mrs Vandewall portraits were painted by Benjamin West. R.A. There is an old hand written label on the back of the portrait of Thomas Neate stating “Thomas Neate with boar spear the boy of Sir Joshuas picture..... He lived for many years at Binfield Lodge, Berks .... Neate”


The family appear to have rented the house that was rebuilt on the site of Alexander Pope's former home at Binfield, some time after the death of Samuel Vandewall. 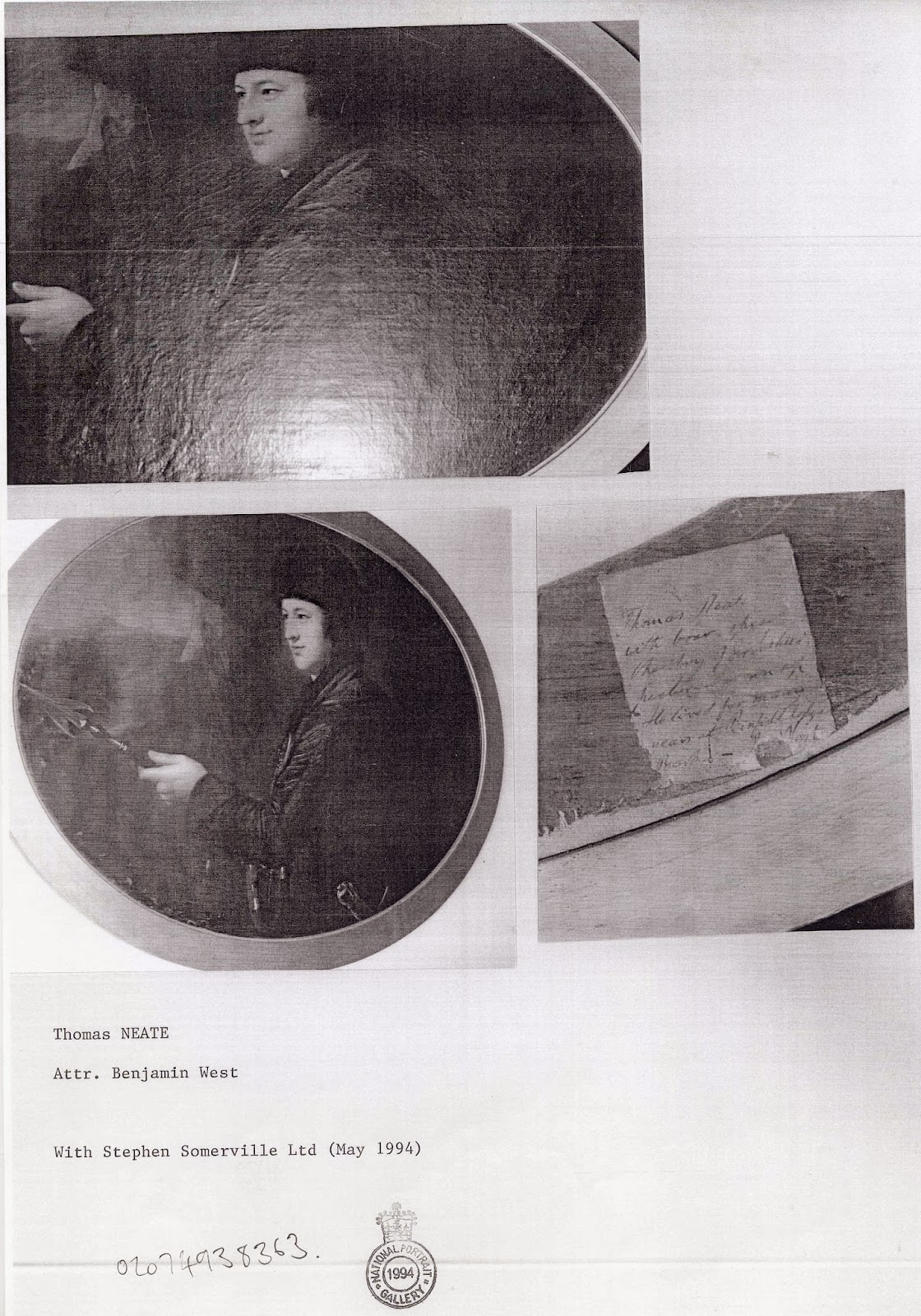 Notes. Binfield Lodge was the family home of Alexander Pope from 1705 -1716, when Catholics had to reside at least 10 miles from the City of London. 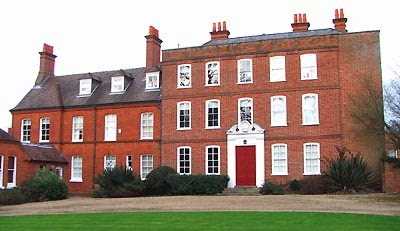 Binfield Lodge - rebuilt circa 1720 The building on the left a later extension.


In an article in the Home Counties Magazine (2) 1902, entitled Pope at Binfield it states that the history of the house begins in 1695, when ‘Gabriel Young of Warfield’ (a village just two miles up the road from Binfield) ‘sold to Charles Rackett, of Hammersmith…for the sum of £445, all the measure of tenement called Whitehill House, with five closes of arable or pasture land….


The article describes how Charles Racket was ‘no doubt the husband of Magdalen Pope, the poets elder half sister. The deed of conveyance was witnessed by Alexander Pope, who 3 years later purchased it for the same price. Pope mentions the Racketts in his correspondence, in the year 1711, as living at Hall Grove, a house near Bagshot (again reasonably close to Binfield). The article suggests that Pope may have gone to reside there at once in the summer of 1698 – when his son was 10. He left the property in trust to his son Alexander Pope, the younger in April 1700. At the request of Pope the younger, the house was sold in 1715 to James Tanner for the sum of £500 – Fitzgerald says that with this sale the connection of the poet and his family with Binfield ends, and all trace of them has vanished. His father dyeing two years later, and Pope himself dying in 1743.


From Tanner, the house passed to William Reynolds Esq who died in March 1775 leaving the house to his wife. After her death in the following year, it passed to Elisha Biscoe, who died in 1776, and whose son sold it to James Batson.

After the Batsons, the house was sold to Rev Edward Fane, who sold it to Gerald Fitzgerald Esq in 1841 – passing, upon his death in 1873, to his son Lucius – the author of the article. I’m not sure where Fitzgerald obtained his information – but it is backed up by the notes of Frank Donaldson, who makes reference to the catalogue of sale at Reading Reference library – which detail the contents of the sale in 1887, when Fitzgerald sold the house – shortly after which, the article was published in the Parish Magazine.

In 1754 William Pitt the Elder bought and rebuilt the Manor Binfield from the Catholic John Dancastle a close friend of Pope.

In 1757 William Pitt bought Barkham Manor nearby, which on his death in 1783 his brother John Pitt sold to Thomas Fonnereau M.P. son of Thomas Fonnereau, an executor of the will of Samuel Vandewall. 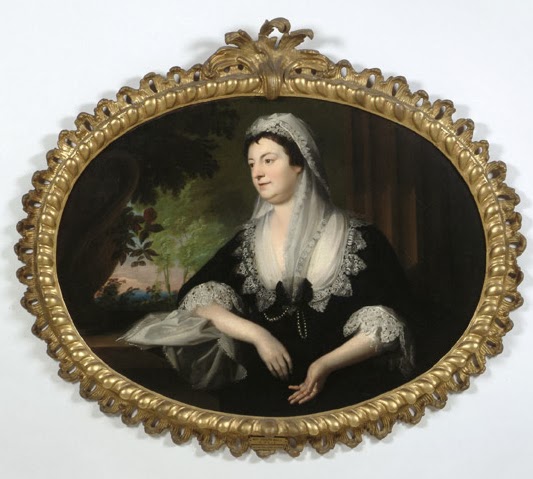 Another view of the Benjamin West Portrait of Mrs Vandewall. 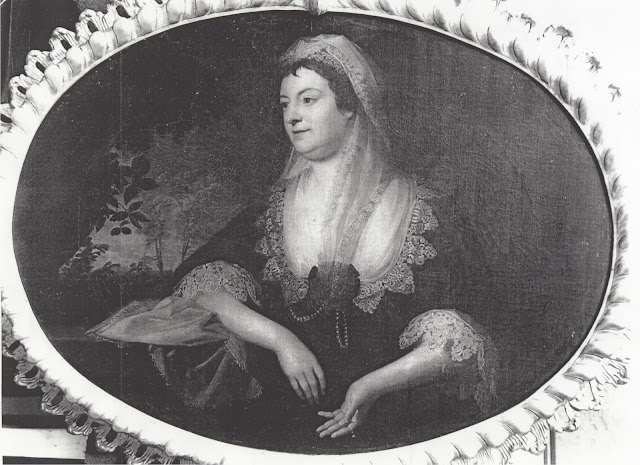 A much higher resolution photograph of Mrs Vandewall in B&W. 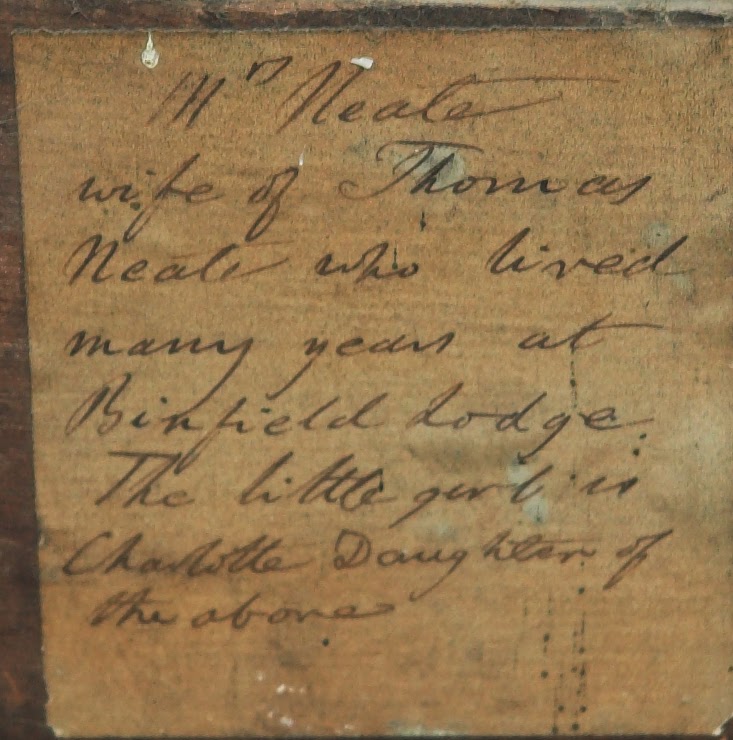 Label on the back of the portrait of Charlotte Neate.

1794. Death of Martha Vandewall at Bath. Buried at Jordans Meeting House Burial Ground, Buckinghamshire in the vault of Sam.Vandewall.

1796. Amelia daughter of Thomas Neate described in The monthly Magazine as of Binfield, marries AE Young at Orlingbury, Northants


The bust of Pope once belonging to Mrs Vandewall is inherited from William Seward by the banker William Moreland (1738 -1815).

The Andrades were contacted but were unable to remember their source.

1967. Sold to dealer Robin Eden of Pickwick Manor, Pickwick, Corsham, Wilts. who then sold it to

Posted by David Bridgwater at 08:35