Bust of Pope in the Will of William Seward

The Will of William Seward.

The will of William Seward shows clearly that the bust of Pope was given to him by Mrs Martha Vandewall, mother of Thomas Neate, who was married to Seward's sister Charlotte.

Sometime after 1762 the Vandewall family lived at what was once the Pope family home at Binfield Lodge, Binfield, Berkshire.

I leave to Mary Crossing Twenty pounds a


Year to be paid to her quarterly with the Thirty pounds


a year left to her by my Father. I leave to Richard


Strantham Twenty pounds a year to be paid half


yearly I give to Elizabeth Kenrick as much money


as will purchase at my deceace Four thousand


pounds Stock in the three per Cents to be paid her


upon the day of Marriage or when she comes of age


Kenrick to be her Trustees. The remainder of what


I leave the Rev. Jarvis Kenrick and Thomas Neate Esqr.


and William Morland, Esqr. Fifty Guineas each and


appoint them Executors to my will I leave Mr.


Morland my Bust of pope given to me by Mrs.


Vandewall I leave & bequeath my Library to my


Neate and Le Fever Neate to be equally divided

I Desire that my Executors will present Dr. Carmichael Smith with One hundred pounds at my decease & that my old & true Friend Sir George Baker will accept of my Fourth Translation of Pliny in twelve Volumes Quarto & my Edition of Swift Octavo

Note 1, Sir George Baker M.D. F.R.C.P.(1722 -1809) of St Pauls Churchyard was Physician to George III and the Queen, he owned the terra cotta bust of Hogarth by Roubiliac now in the national Portrait Gallery, London, (engraved by Cooke in 1810 as frontispiece to Vol II 0f Nichols and Stevens Hogarth ) now at N.P.G. see Esdaile p. 50.

A Few Notes about William Seward. 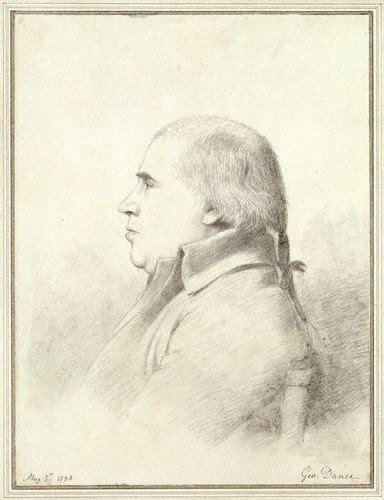 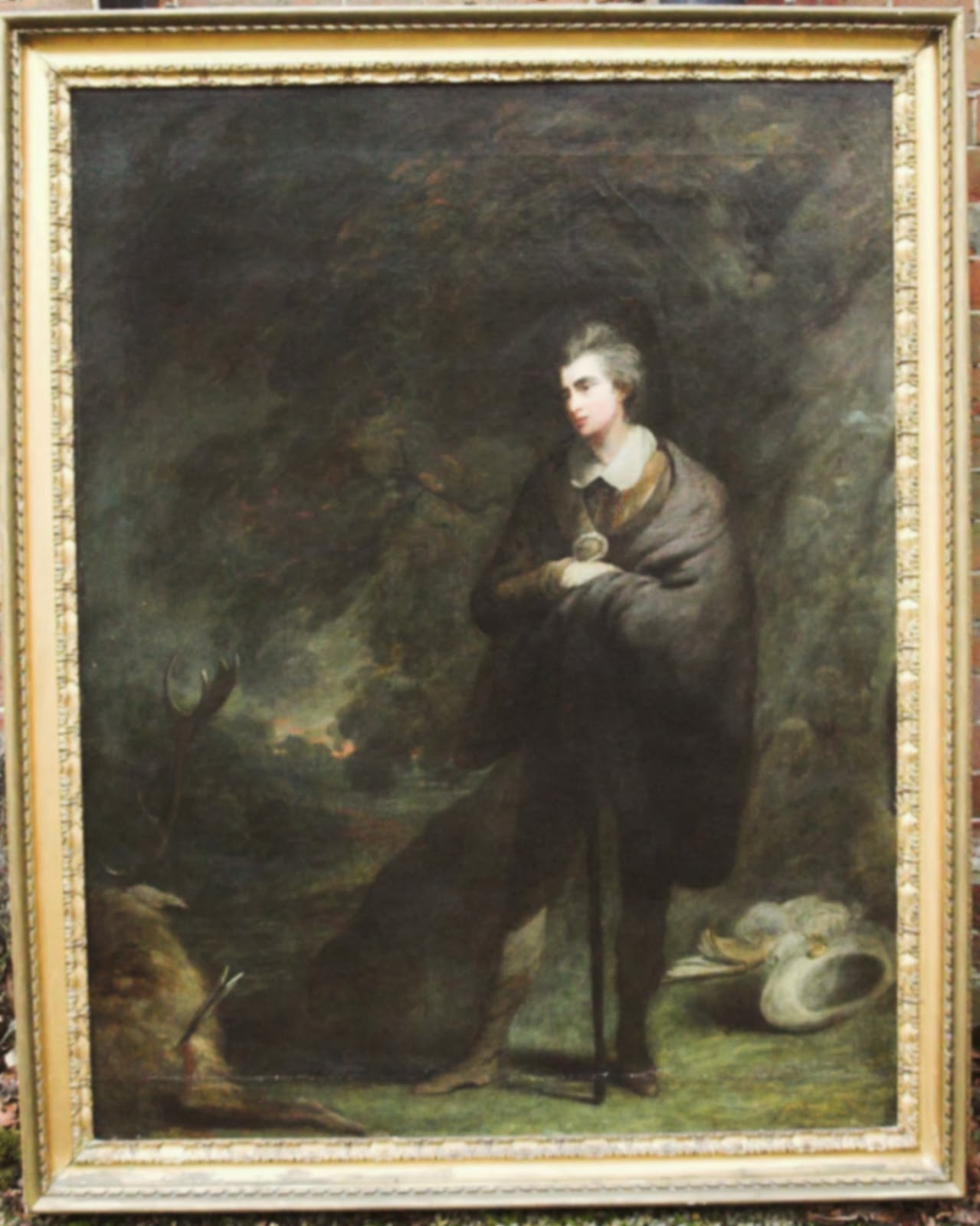 Seward was the only son of William Seward, a partner in the major London brewery Calvert & Seward. He was born in London in January 1747. Having started school near Cripplegate, he moved in 1757 to Harrow School, but also attended Charterhouse School for a while before matriculating at Oriel College, Oxford in 1764.


After university, Seward travelled widely in Italy and elsewhere in Europe. He had considerable wealth, but no taste for business, and sold his interest in the brewery when his father died. However, his cultivation and conversational talents soon gained him a place in London literary circles, notably that of the Thrales in Streatham, also a brewing family. There he met Samuel Johnson. The two became intimate and Seward became a member of the Essex Head Club that Johnson had founded. Johnson also provided him with a recommendation to James Boswell when he visited Edinburgh and the Highlands in 1777. He made a western tour of England in August 1781, indulging his hypochondria liberally by consulting "a doctor, apothecary or chemist" in every town where he stopped, according to Fanny Burney.[1] Two years later he was in Paris, and then in Flanders studying the pictures of Claude Lorrain. Meanwhile he had been elected a Fellow of the Royal Society and a Fellow of the Society of Antiquaries in 1779.


When Johnson died in 1784, Seward helped the classical scholar Samuel Parr to compose his epitaph.In 1788, Seward was thought to be suffering from mental illness and was confined to a straitjacket for a time. Four years earlier, Mrs Thrale had recorded being "plagued… with a Visit from Seward, who I think is going out of his Senses by the oddity of his Behaviour. She also recorded a proposal of marriage from him after she was widowed in 1781.

Seward had been responsible in 1776 for introducing the music scholar Charles Burney and his family to the Thrales, which led to an intimacy between Hester Thrale and Fanny Burney that lasted until the former's remarriage in 1784. Fanny Burney's copious letters and diaries contain many affectionate references to Seward. In March 1777, for instance, she describes him in a letter to another Burney family friend, Samuel Crisp, as "a very polite, agreeable young man. On 15 January 1782, her 17-year-old sister Charlotte Ann Burney noted that on her arrival at Mrs Thrale's, "Mr Seward came up to me immediately as he commonly does when I meet him to do the honours to me in his odd way;- lugging a chair into the middle of the room for me, and upon my saying I could not sit there by myself, "oh," he cried, "I'll stand by you, and amuse you. In May 1792 he was amusing Fanny: "When I came in... I was accosted by Mr. Seward, & he entered into a gay conversation, upon all sorts of subjects, which detained me, agreeably enough, in a pleasant station by one of the windows."


Other well-known people whom he knew and helped included the classical scholar Richard Porson, the radical Thomas Paine and the poet Anna Seward (no relation).

Fanny Burney also provided in a letter of 2 May 1799 a vivid account of Seward just before he died: "Poor Mr Seward!- I am indeed exceedingly concerned - nay, grieved for his loss to us - to us I trust I may say, for I believe he was so substantially good a Creature, that he has left no fear or regret merely for himself. He fully expected his end was quickly approaching... he spent almost a whole morning with me in chatting of other times, as he called it - for we travelled back to Streatham, Dr Johnson and the Thrales."

Seward had become very fat, and died of dropsy at his lodgings in Dean Street, Soho on 24 April 1799. He was buried in the family vault at Finchley on 1 May.


Many articles, including a series of ‘Reminiscentia,’ were supplied by Seward to the Whitehall Evening Post, and he contributed anecdotes and literary discoveries to Thomas Cadell's Repository and the European Magazine. His papers of ‘Drossiana’ in the European Magazine from October 1789 formed the basis of his anonymous Anecdotes of some Distinguished Persons (1795–7), 5 vols (a fifth edition in four volumes in 1804). This was followed in 1799 by two volumes of Biographiana, for which the Gentleman's Magazine praised him for "felicity... in hitting off the leading features of his subject."[10] Thomas James Mathias in his long poem The Pursuits of Literature [11] speaks of Seward as a "publick bagman for scraps", but describes the volumes as entertaining and their author as the best compiler of anecdotes after Horace Walpole


Information above from Wikipedia. 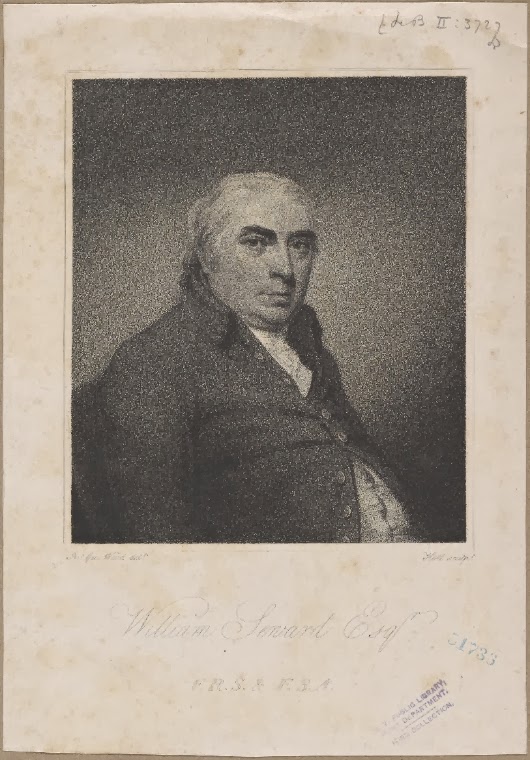 Much more on Seward and the Vandewall / Neate Families to follow in  future postings to this blog.