The quotations in italics are mine.

An Italian sculptor, he spent a long period in England where he enjoyed the protection of Lord Burlington, the ‘architect earl’ for about 14 years. Vertue’s short account of the sculptor, which suggests an irritation with the Italian’s imperious manners, provides the best insights into the English phase of his career.

John Bridges, the Northamptonshire antiquary, recorded that Guelfi’s family came from Bergamo in Lombardy and that he was trained in Rome under Camillo Rusconi (1658-1728). Rusconi was a leading practitioner of the late baroque style and under him Guelfi must have developed his skills as a modeller, and was perhaps employed on the lucrative business of restoring antique sculpture. His name is recorded during the years 1714-1720 in the Stato delle Anime, S Andrea delle Fratte, Rome, the area around the Spanish Steps favoured by artists and English collectors. Vertue suggests that he was ‘encouragd. or brought to England’ by Burlington (Vertue III, 50-51), but it is possible that Lord Leominster, later 1st Earl Pomfret, who was in Rome in 1718 and became his first certain patron in England, was responsible for Guelfi’s journey north. William Kent, the painter and architect most closely associated with Burlington, was also in Rome in 1718 and that year painted a canvas for Leominster. Kent may have acted as an intermediary between Burlington and Guelfi. The patron was back in England by July 1720 and Guelfi followed a few months later.

Leominster had inherited a number of the ancient Arundel Marbles, which he displayed in the gardens of his Northamptonshire seat, Easton Neston, and Guelfi was given the task of restoring them (8). Bridges visited Easton Neston in July 1721 and noted ‘In a corridor or room adjoining to ye South end of ye H[ouse] I saw 15 statues ... I found an Italian employ[e]d by this pre[sent] Lord L[eominster] in making perfect those statues maimed. Si chiama Gio. Battista Guelfi ...’ (Bodleian, Bridges, Top. Northants f.1.60a). Horace Walpole condemned the results: ‘the best of the collection are those which he restored the least. He misconceived the original character of almost every statue which he attempted to make perfect, and ruined the greater number of those he was permitted to touch’ (Anecdotes,1876, III, 40).


It is not clear what other sculpture Guelfi provided for Burlington. Vertue wrote that he was ‘continually almost employed for him several years’ (Vertue III, 73-4) working both at Burlington’s London house and at Chiswick Villa where he carved many statues (10). Faulkner’s guide, published in 1845, mentions that Guelfi’s statues of Venus and Mercury were then in the Gallery (11), together with two little heads (15).

Guelfi’s most influential work, the monument to Secretary of State, James Craggs, in Westminster Abbey (1) was overseen by Alexander Pope, a member of Burlington’s inner circle. It was designed by the architect, James Gibbs, and broke new ground with its standing, cross-legged effigy, leaning against an urn. The pose, which has antique precedents, was later taken up by a number of other sculptors, notably William Woodman II, Michael Rysbrack, Peter Scheemakers, Henry Cheere and John Bacon RA. Pope superintended the design and its execution as well as providing the epitaph.

In a letter to the patron, Craggs’s sister, he pointed out that Guelfi was at a great disadvantage in not being able to work from the life since her brother had died before the commission came about. The critic, James Ralph, was uncharacteristically charitable about the result, admiring the ‘simple and elegant taste’ of the composition, but he felt that ‘if the face and head had been more finish’d, the whole [would have] been without blemish’ (Ralph 1734, 73). A curious terracotta statuette of Craggs with a detachable wax face has survived and appears to be the model for the effigy (Soane Museum - below). 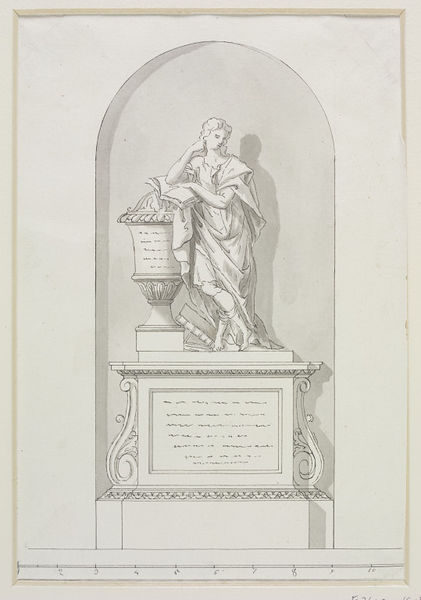 Drawing atrrib to James Gibbs possibly a preparatory sketch for the Craggs Monument carved by Guelfi in Westminster Abbey. 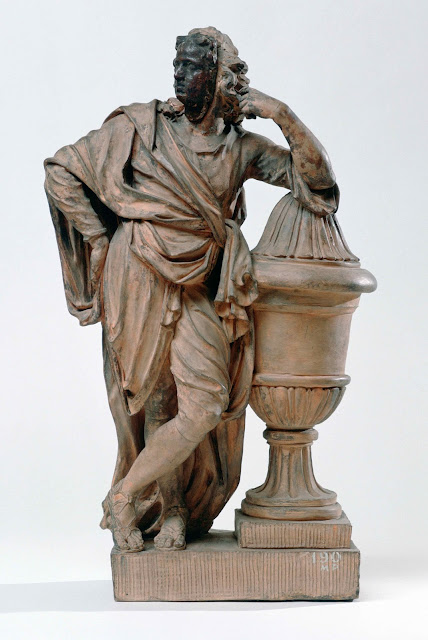 I am very grateful to Stephen Astley of the Soane Museum, Lincolns Inn Fields, London for providing me with  the above photograph of the terracotta model with wax face of the figure of James Craggs Jnr for the monument in Westminster Abbey made by Guelfi. 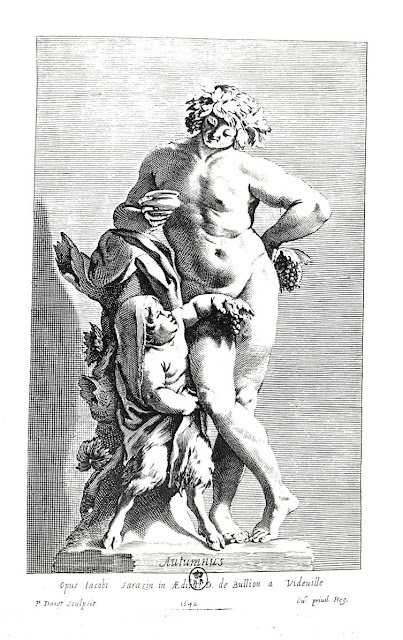 Autumn by Jacobus Sarazin an Engraving by P Davet of 1642. 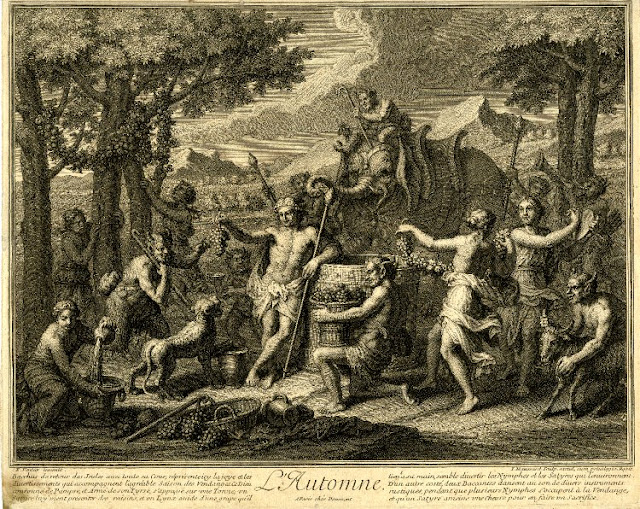 The pose is perhaps, based on a version of the ancient statue of the Leaning Satyr in the Musei Capitolini in Rome thought to be a Roman copy of a bronze original by Praxiteles. There are many versions of this statue. 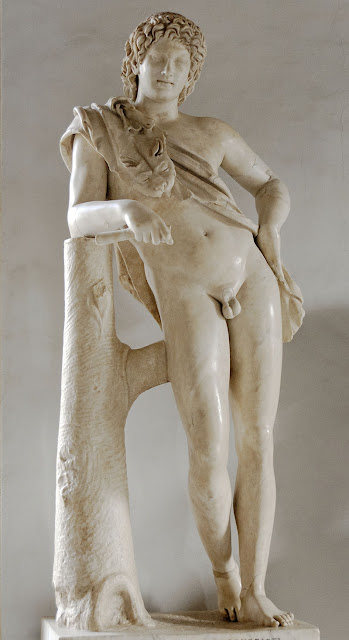 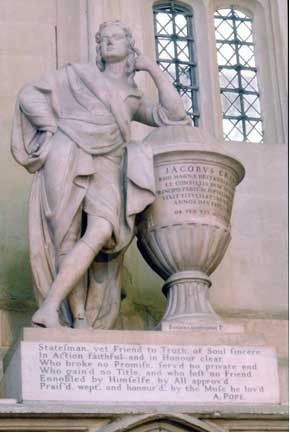 Permission is not currently granted for photography in Westminster Abbey. 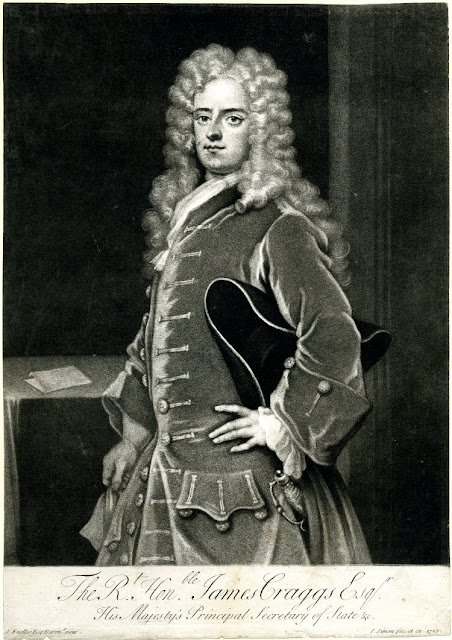 Mezzotint by Simon after Kneller of James Craggs Jnr. - 1720. 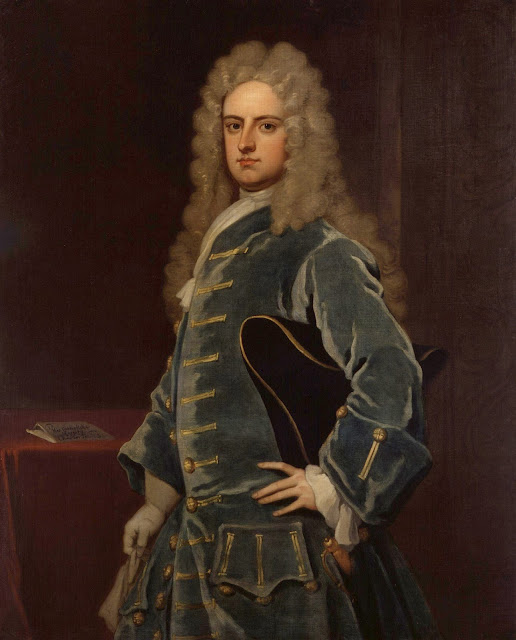 For an excellent in depth biog. of Craggs see -

Guelfi worked on a number of monuments for patrons linked to Burlington by family ties or a shared interest in Palladian architecture. Several of these memorials were designed by Kent (3, 5, 7), and most of Guelfi's monuments had busts set off by a variety of architectural grounds (4-7).

In at least one case Guelfi was responsible only for the bust (7), of characteristically elongated form, with the ‘vacuous expression common to all Guelfi’s portraits’ (Grove 13, 782). The sculptor’s most ambitious and successful monument outside London, to Thomas Watson Wentworth (3), is undocumented, but signed Guelfi Romanus fecit. Kent’s elegant design made use of a pyramidal ground (now missing) above a double plinth: a satisfying inner triangle is formed by his effigy, which stands to the left of a central urn and his wife’s seated image at the right. 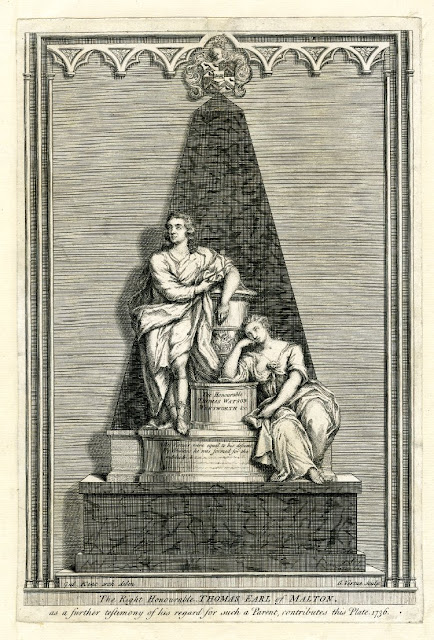 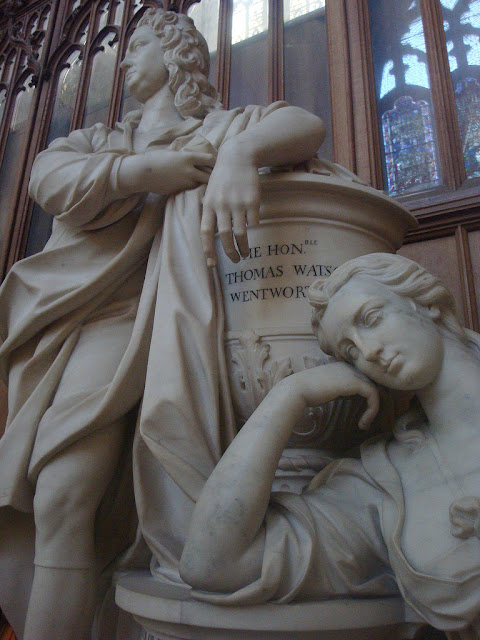 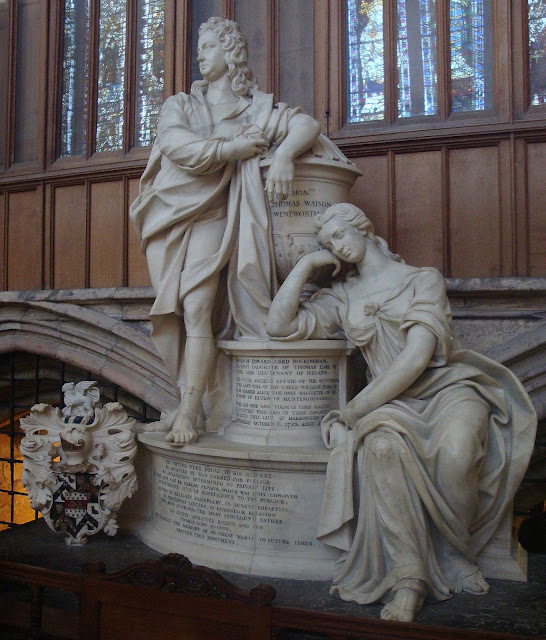 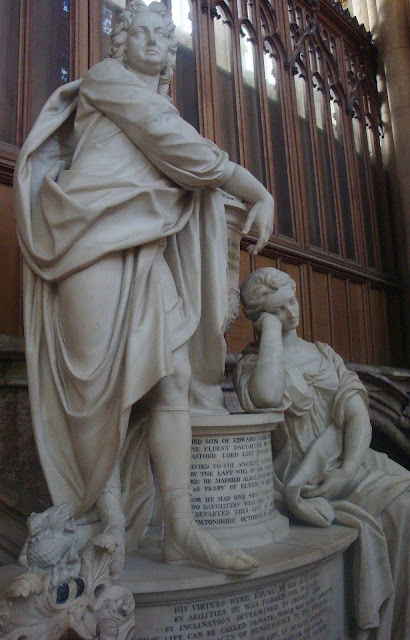 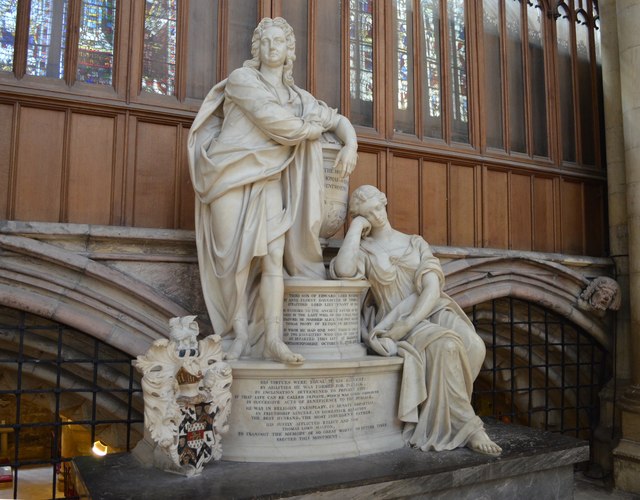 A number of other monuments have been attributed to Guelfi by Margaret Webb, notably three to members of the Halsey family at Great Gaddesden, Herts, Thomas (†1715), Anne (†1714) and Jane (†1725). She also credits him with the memorial to Brigadier Michael Richards (†1721) at St Luke, Charlton, London. 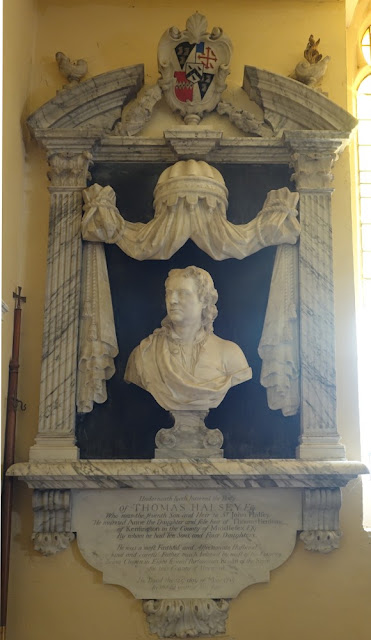 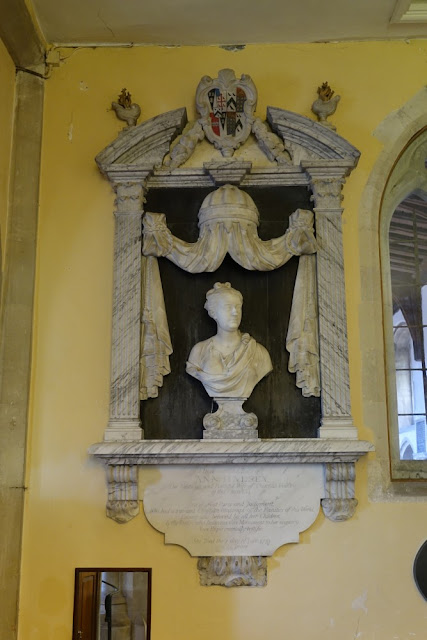 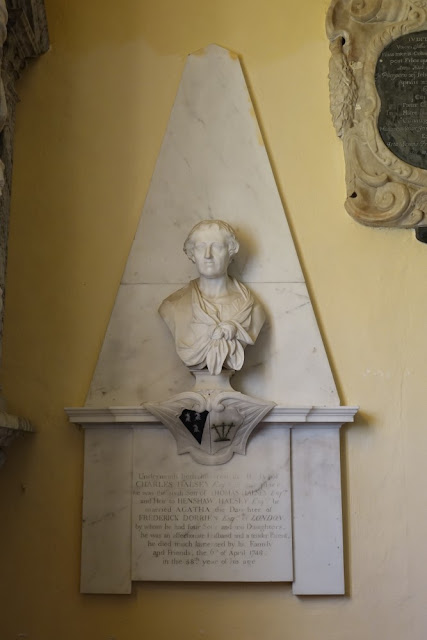 The Halsey Monuments attributed to Guelphi by Mrs Webb
(probably not by Guelfi - far too good and their necks are in proportion!)


Among Guelfi’s documented memorials is the trio raised under the terms of the will of Katherine, 6th Countess of Westmorland (†Feb 1730) to members of her family (4-6). These were probably made in 1731 and they all have portrait busts, set either in an architectural frame (5) or more elaborately treated with a tent-like canopy (4, 6). The first of the series was probably that commemorating Lady Westmorland’s parents, Thomas and Katherine Stringer (5) and was the subject of correspondence from John Fane of Mereworth, who negotiated prices on Westmorland’s behalf. Fane approached Guelfi and also Rysbrack, the Italian’s chief rival in London, for estimates calculated on a design by Kent. Guelfi indicated that the two proposed busts would cost about £30 each; Rysbrack apparently rejected Kent’s drawing, substituting ‘a very bad one’ of his own with an estimate of £155. Guelfi won the contract despite raising his price in a detailed estimate communicated by Fane on 5 September 1730, which set a fee of £70 for the busts and £100 for ‘the back part’ (Westmorland Papers fol 99). Westmorland’s accounts itemise a first payment of £150 to Guelfi on 26 March 1731 and three weeks later, on 16 April 1731, another first payment of £100, for the monument to Lady Westmorland’s first husband, Richard Beaumont (4) (ibid, fol. 95).


The success of these monuments probably led the Duke of Richmond, whose Northamptonshire estates adjoined Westmorland’s, to commission a monument for his mother (7), again designed by Kent, with a bust by Guelfi, conspicuously signed Joannes Baptista Guelfi, Romanus fecit. The delicate terracotta model survives as evidence of Guelfi’s skill with the medium. The less familiar London sculptor John Boson (or Bossom), was called in to carve the surround, presumably because Guelfi had returned to Rome.


Guelfi was probably introduced to the court by Kent, who was master carpenter in the office of works from 1726. In 1727 the sculptor received an unusual commission, to carve chandeliers for the sumptuous festivities which were held in Westminster Hall at the coronation of George II (17). A number of other payments are recorded to him in the royal accounts between 1730 and 1733, all associated with Richmond Lodge, a favourite summer residence of the King and particularly of Queen Caroline. In 1730 a library was added to the Lodge with a chimneypiece decorated on the cross-member with three masks by Guelfi. New work was under way late in 1730 on a rustic grotto in the gardens containing 3 graceful rooms, one of them a library dedicated to quiet meditation. Here Queen Caroline planned to install a series of busts of her particular pantheon of scientists and philosophers, Newton, Locke, Clarke, Woolaston and Boyle (14). Four were destined for niches and the fifth, Boyle, was to be on a pedestal in the farthest recess. In 1731 Vertue noted that 4 (he did not list the Boyle) were to be carved in stone by Guelfi and a payment of £160 4s, made in December 1731, probably relates to the 4 terracotta models, which later came into Kent’s possession and were bequeathed to Lady Isabella Finch. A stone bust of Newton which belonged to Pope (13) was probably part of this commission but was rejected when the Queen changed her mind and decided to have the busts carved in marble. The bust of Sir Francis Bacon, whose authorship is undertain, was the last addition, provided in 1733. An assertion by Sir Francis Walsingham in the Free Briton that Rysbrack was the sculptor of the busts was vigorously refuted in the Grub-Street Journal: ‘For in order to do honour to Mr Rysbrack, he [Walsingham] has attributed to him the bustoes in her Majesty’s Grotto; which unfortunately happen to be the Work of another, and as Some think, a much inferior Hand’ (G-St J 193, 6 Sept 1733). 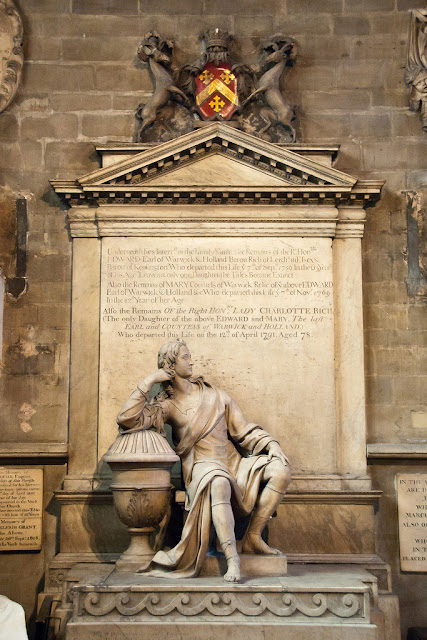 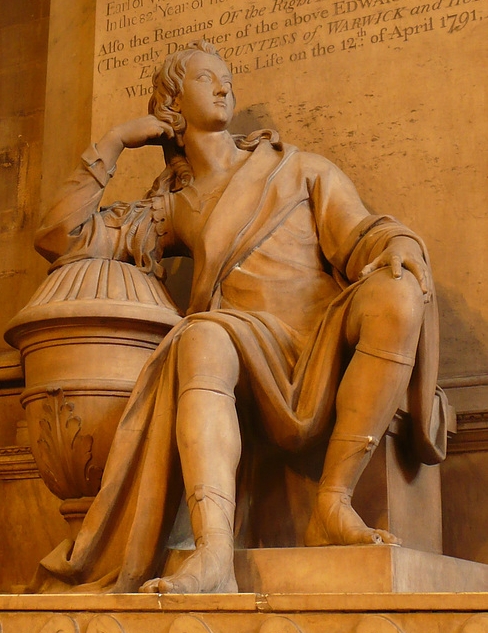 1725 -30. -Thomas Watson Wentworth, Lord Malton and his wife, York Minster. (images above)
1731. - Richard Beaumont, Kirkeaton, Yorks (see next entry).
1731 - Thomas and Katherine Stringer, Kirkthorpe. Commissioned by Thomas Fane, 6th Earl of Westmorland,under the will of his wife Katherine Stringer. In 1708 Fane married Katherine only daughter of Thomas Stringer who inherited her fathers estate at Sharlston Yorkshire, she died with no heirs 14 February 1730 the last of the Stringers to perpetuate the memory of her family she stipulated the erection of monuments to her paremnts at Kirkthorpe her first husband  Richard Beaumont at Kirkheaton and her distant cousin Colonel Thomas Stringer at Enfield. (Cristiano Giometti in The Lustrous Trade). 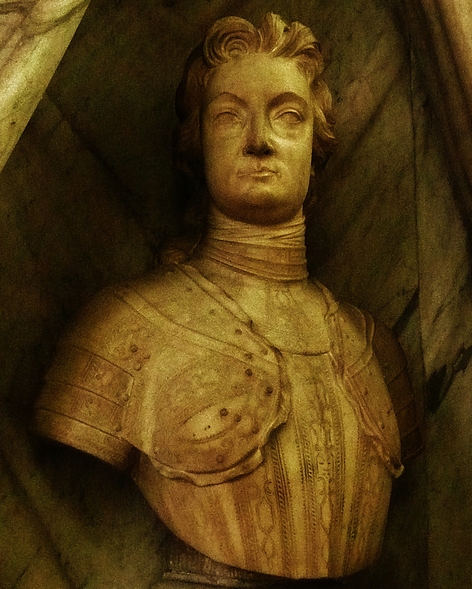 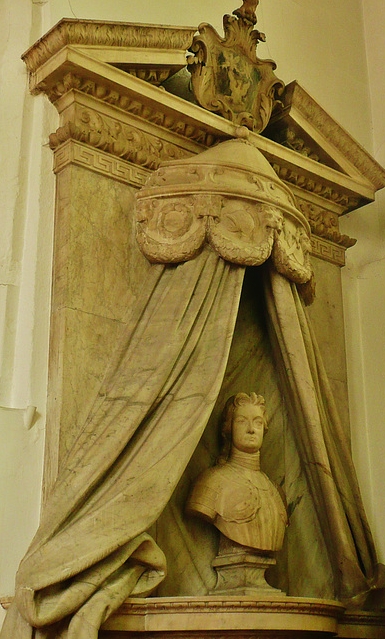 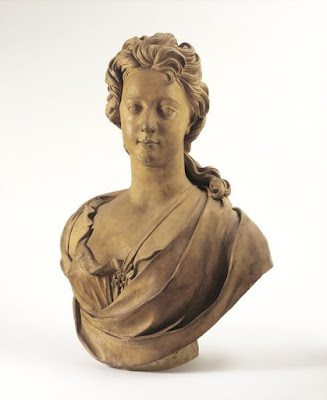 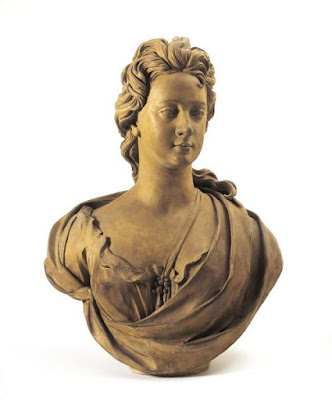 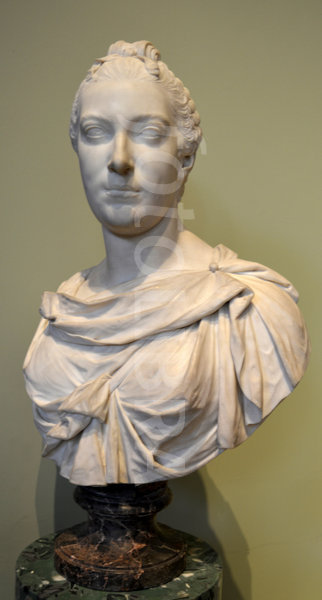 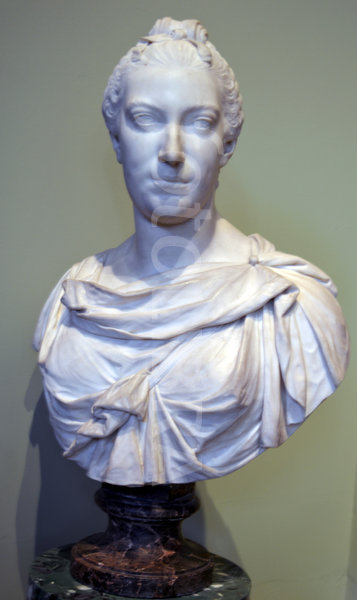 Henrietta  Louisa  Fermor,
Dowager  Countess  of  Pomfret.
My humble opinion is that they are far too good to be by Guelfi.

It is my guess that they were done in France or Italy - the coloured marble socles are distinctly non English although of course they could be replacements.

I will publish much better photographs in a future post.

This bust and the bust of her husband have until now been tentatively ascribed to Guelfi - probably because of his work for the family, butchering their antiquities at Easton Neston in the early 1720's.

The monument the Countess of Pomfret is at St Mary, Oxford and is by John Townsend IV ( Biog. Dictionary of Sculptors Roscoe et al).
Current thinking (until now) is Guelfi may have been responsible for the busts of the Earl and Countess of Pomfret (marble; Oxford, Ashmolean); if so, they are his finest works!

Guelfi's known work is distinguished by its design, perhaps owing to his association with such architects as James Gibbs and William Kent, but dull in execution.
He carved a number of funerary monuments, among which that to James Craggs (terracotta model, 1724, London, Soane Mus.; marble, erected 1727, London, Westminster Abbey), designed by Gibbs, was very influential; the cross-legged stance of the standing effigy of the deceased, which leans on an urn, was adapted by other sculptors in 18th-century England, most notably by Michael Rysbrack. Guelfi himself used the composition again for his monument to Thomas Watson Wentworth (Gestorben: 1723) (marble, c. 1731; York Minster), having already employed a variant of it in 1730 for that to Edward Greville, 7th Earl of Warwick (Gestorben: 1727) (marble; London, St Mary Abbots, Kensington). He also produced portrait busts for smaller monuments, including that to Anne, Duchess of Richmond (marble, 1734; Deene Park, Northants), also designed by Kent. The terracotta model (London, V&A) for this bust has the elongated form, blandly modelled features and vacuous expression common to all Guelfis portraits.

Posted by David Bridgwater at 02:41 No comments: