Continuing the Theatrical and Shakespeare Theme: 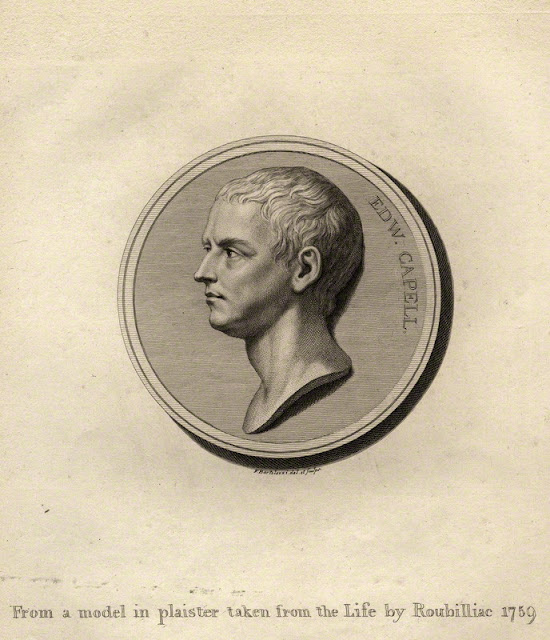 Engraving  of the Missing Plaster Rondel by Roubiliac
by Bartalozzi
He was born at Troston Hall in Suffolk.
Through the influence of the Duke of Grafton he was appointed to the office of Deputy Inspector of Playsin 1737, with a salary of £200 per annum, and in 1745 he was made a Groom of the Privey Chamber through the same influence.
In 1760 appeared his Prolusions, or, Select Pieces of Ancient Poetry, a collection which included Edward III placed by Capell among the doubtful plays of Shakespeare.
Shocked at the inaccuracies which had crept into Sir Thomas Hanmer's edition of Shakespeare, he projected an entirely new edition, to be carefully collated with the original copies. After spending three years in collecting, and comparing scarce folio and quarto editions, he published his own edition in 10 vols (1768), with an introduction written in a style of extraordinary quaintness, which was afterwards appended to Johnson's and Steevens editions.

Dr. Johnson observed that his abilities 'were just sufficient to select the black hairs from the white for the use of the periwig makers'.
Capell published the first part of his commentary, which included notes on nine plays with a glossary, in 1774. This he afterwards recalled, and the publication of the complete work, Notes and Various Readings of Shakespeare (1779–1783), the third volume of which bears the title of The School of Shakespeare, was completed, under the superintendence of John Collins, in 1783, two years after the author's death. It contains the results of his unremitting labour for thirty years, and throws considerable light on the history of the times of Shakespeare, as well as on the sources from which he derived his plots. 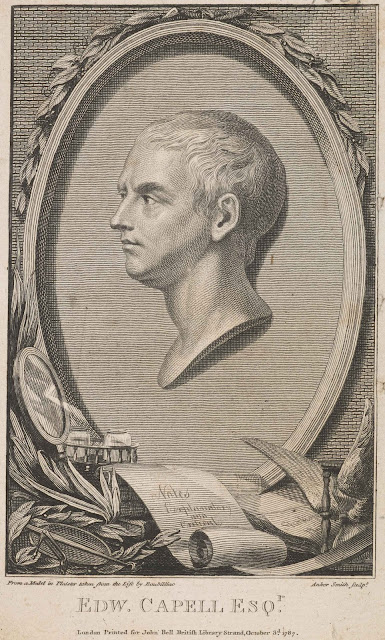 Posted by David Bridgwater at 11:47 No comments: