William Tyler was a pupil of Louis Francois Roubiliac.
The Royal Academy have a copy of a brief autobiography.

Joseph Smith was Provost of the Queen's College Oxford from 1730 until his death in 1756.
In 1731 he was instrumental in procuring through the offices of Arthur Onslow and John Selwyn  the sum of £1000 from Queen Caroline for the finishing of the College buildings.
He was responsible for placing the statue of Queen Caroline by Henry Cheere in the rotunda on the High Street front of Queen's College.

For a brief look at the project for the statue of Queen Caroline on the front at Queen's see my previous post.

For a very useful contemporary biography of Joseph Smith see

Available on line through Google Books. 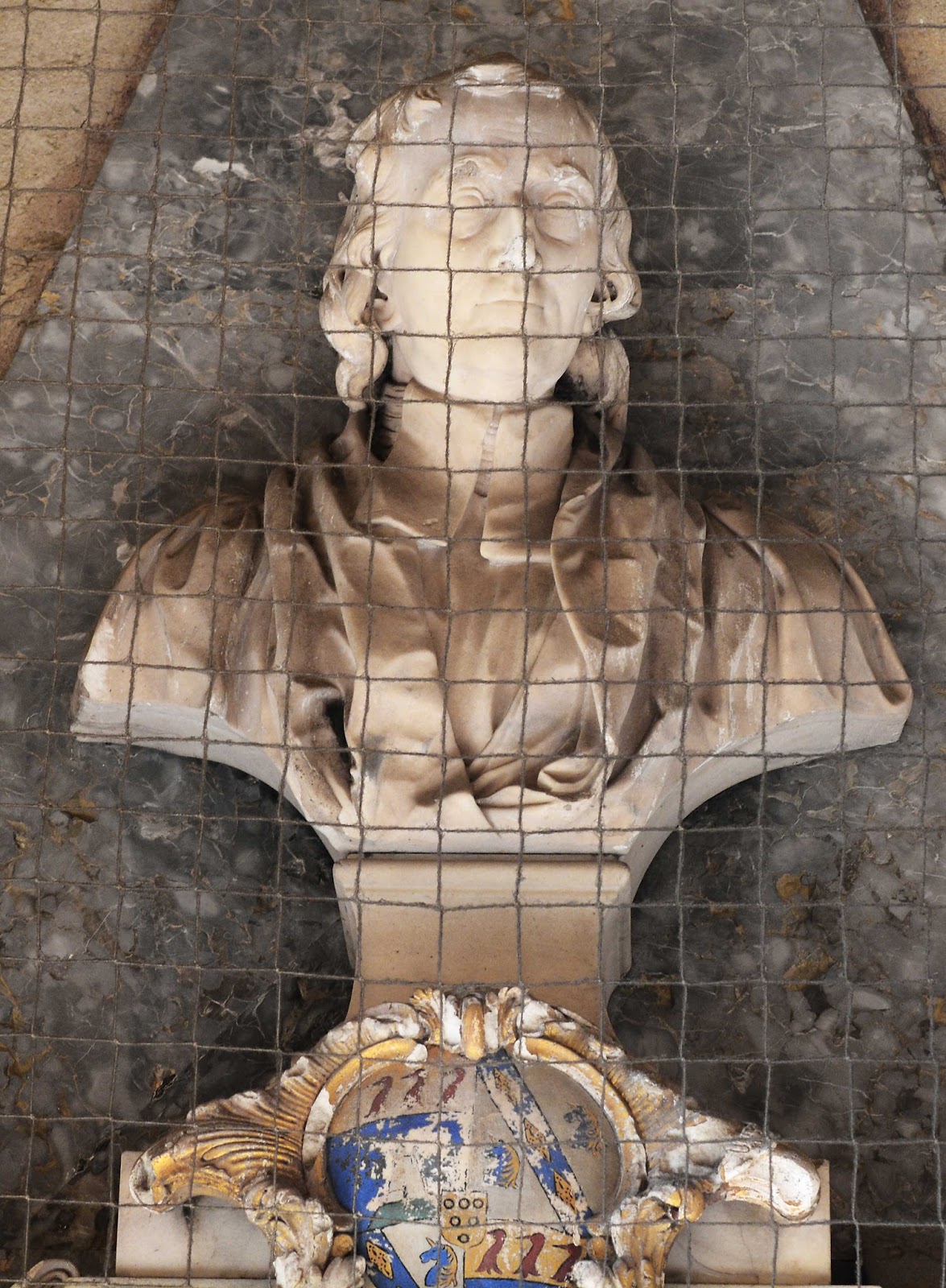 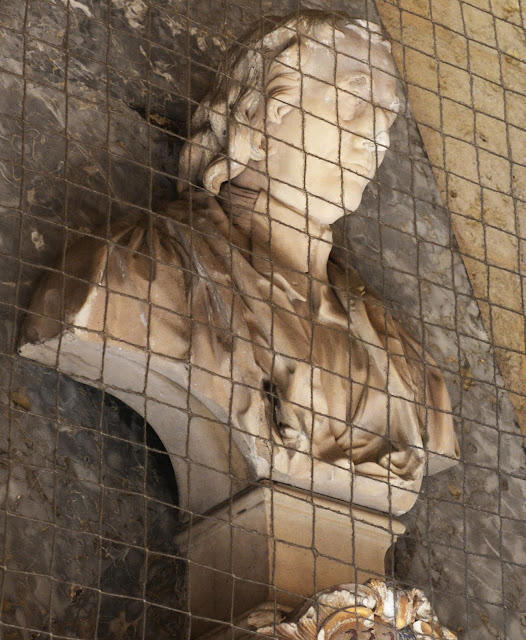 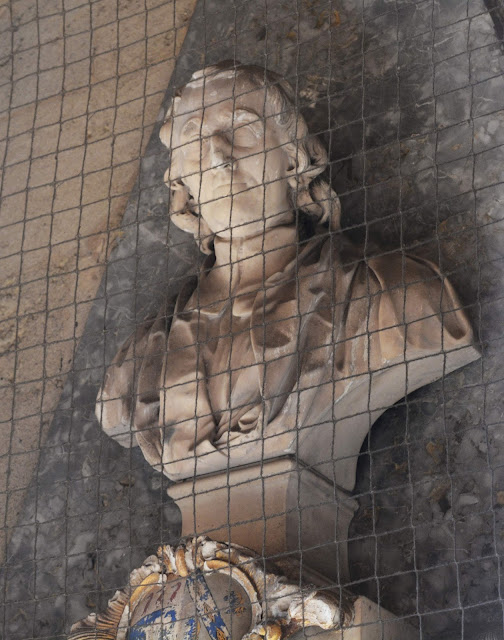 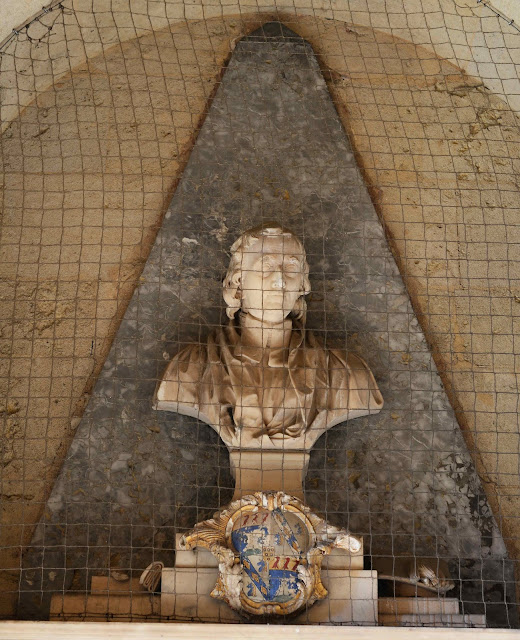 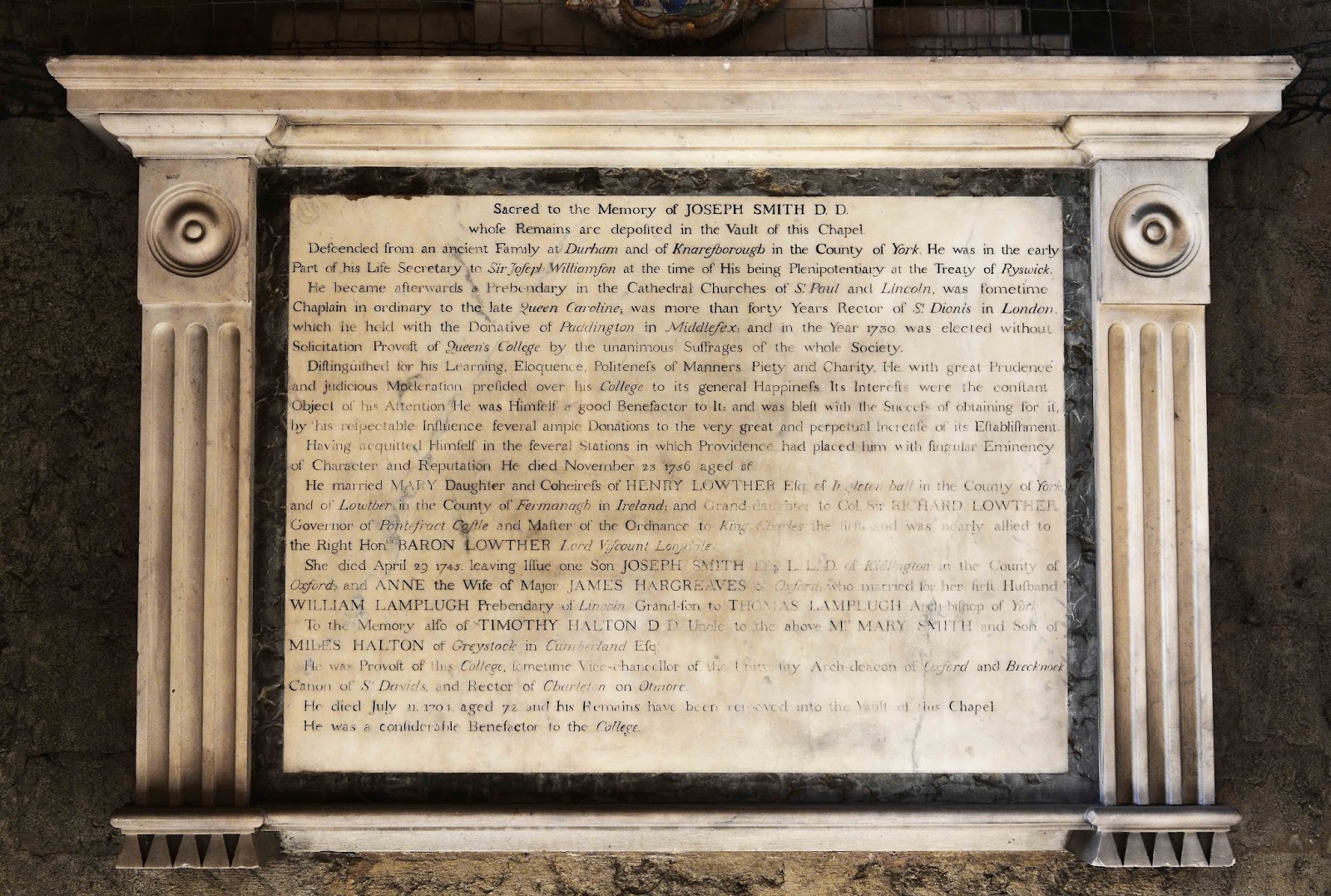 The papers on the table on the left are inscribed ‘The Treaty of Ryswick, 1697', and lie on a book ‘Smith, Devine Being'. His left hand holds the book ‘Beveridge's Thoughts' which was published more than 40 times between 1709–1755. The South front of Queen's College is depicted behind the sitter. Showing the Cupola with the statue of Queen Caroline by Henry Cheere. 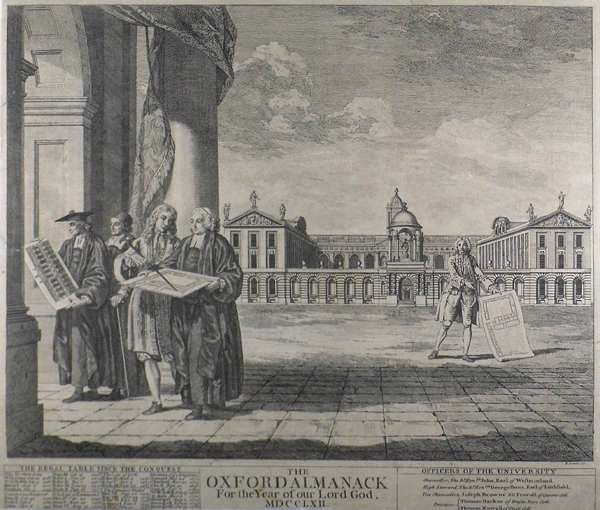 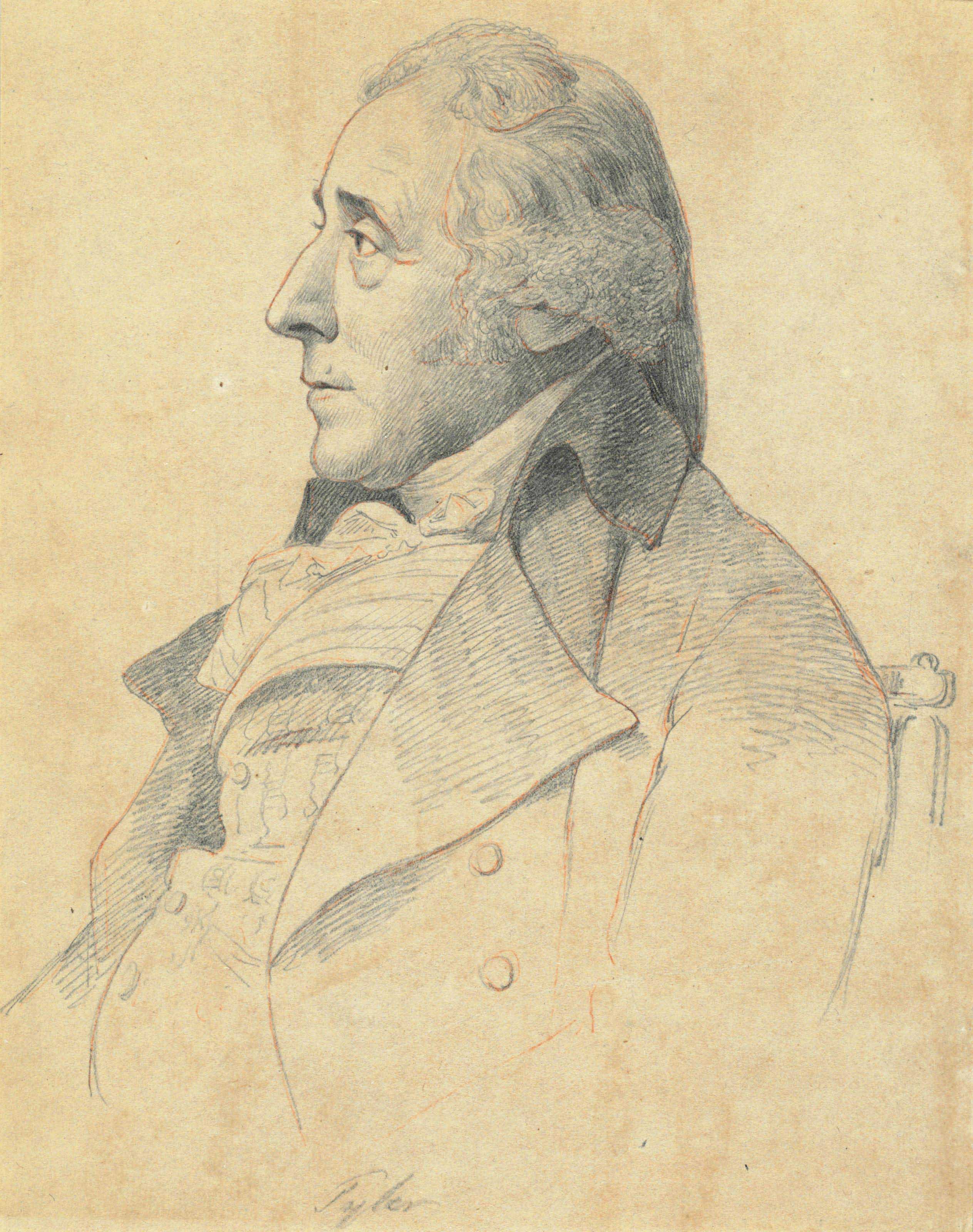 
For a good potted biography of William Tyler see -


A Biographical Dictionary of Sculptors in Britain, 1660-1851


I have lifted the following from the above website

Tyler was an accomplished monumental sculptor and architect and a founder member of the Royal Academy. From references in Joseph Farington’s Diary his date of birth can be fixed as being between 1727 and 1729. Tyler’s family background is obscure although he described himself as the ‘son and grandson of a citizen [of London]’ (CLRO MSS 5.18 quoted in Roscoe 1997 (2), 181), and it is known that his mother died, aged 88, in January 1795. His family must have been well-to-do, as Tyler was sent to Westminster School, and was subsequently placed with the leading sculptor of the day, Louis François Roubiliac, with whom he studied for ‘many years’ (ibid).

Tyler married when he was 22 and Joseph Nollekens RA later recalled that in about 1760 he ‘lived in Dean Street nearly opposite Anne’s Church, where his wife kept a shop and sold watch springs or something of the kind’ (Farington, vol 4, 1316). Tyler must already have had an established business as a sculptor by this time for in the early 1760s he applied for two of the most lucrative commissions of the day. In 1760, in competition with his former master, he submitted a design for the monument in Westminster Abbey to General Wolfe (5) and in January 1762 he offered himself as a candidate for the statue of George III in the Royal Exchange. In both cases the commission went to Joseph Wilton RA.

Tyler played a role in all the fledgling art institutions of the capital. In 1760 he was one of the sculptors involved in the programme of arts connected with the Foundling Hospital, and he exhibited at the Society of Artists exhibitions from their inception in 1760. In 1765 he became one of the Society’s directors, and in December 1768 he was one of the 40 artists whose names appear on the ‘Instrument of Foundation’ of the Royal Academy. The only other sculptors to achieve the latter distinction were Wilton and Agostino Carlini.

From 1763 to 1784 Tyler had premises in Vine Street, Piccadilly. His earliest known work is a very competent multi-figured relief of Diogenes, carved in several gradations (72). He appears to have specialised in monuments of a modest size, sometimes working in collaboration with the architects Robert Adam (10) and Henry Keene (27, 41). Working to Keene’s design he carved the remarkable rococo monument to the 3rd Earl of Lichfield which has two urns in a recessed oval niche, set in a convex frame of yellow marble and surmounted by a white marble oak tree (27).

Several of his earliest known monuments have expressive portrait busts in the manner of Roubiliac, for instance the memorials to Joseph Smith, Samuel Vassall and Thomas Jones (2, 12, 18). His use of multi-coloured marbles and lively putti suggests he was also influenced by Sir Henry Cheere and Sir Robert Taylor. Elements in Tyler’s compositions were sometimes repeated: cherubs decorating an urn with garlands appear on the monuments to the 4th Earl of Lichfield and the 2nd Viscount Ashbrook (41, 50) and were later used by Nollekens. The detailing and finish of Tyler’s monuments is always of a very high standard.

He also sent out chimneypieces, including one to a design by Sir William Chambers for Milton Hall, 1772 (67). At this time Tyler’s business must have been in difficulties, for Chambers wrote to Lord Fitzwilliam enclosing Tyler’s bill and adding ‘If it is convenient to your Lordship, Mr. Tyler will, I believe, be very thankful for the money as he told me in confidence he was as poor as could be’ (Chambers’s Letter-Books, BL Add MS 41133).

In another letter Chambers passed on Tyler’s thanks to Lord Fitzwilliam for looking after Tyler’s man, who had fallen sick when working at Milton (ibid). In about 1773 Tyler embarked on a tour of Derbyshire and Yorkshire with the painter Francis Cotes and the author Theodosius Forrest. An anonymous account of the tour records that Tyler used the trip to find business, securing a commission for a chimneypiece from Lady Rockingham at Wentworth Woodhouse (68).

Some time after 1779 he appears to have gone into partnership with his former pupil, Robert Ashton I, with whom he signed several monuments (47, 48, 56, 57). Their greatest achievement together is the monument to Dr Martin Folkes (56), which has a full-size seated statue of the dignified scholar leaning on his publications.

In the 1780s Tyler practised increasingly as an architect, designing the Villa Maria at Kensington for the Duchess of Gloucester (now demolished), and making alterations to a house in Hampton Court for the Duke, for whom he also acted as an ‘agent’ (Farington, vol 3, 796, 14 March 1797). He worked on two gaols, Maidstone and Dorchester, and designed the town hall in Bridport. Colvin believed his finest work as an architect was the Ordnance Office in Westminster, 1779-80, which was demolished in 1805. Tyler may also have worked on a project in Derby, where he travelled with Sir John Soane in 1796. Nollekens told Joseph Farington that Tyler was appointed mason or bricklayer to the Board of Ordnance by Lord Amherst (Farington vol 4, 1316), for whose family Tyler also produced two church monuments (51, 58).

Tyler was a prominent member of the Royal Academy in the 1790s, despite suffering from fevers, rheumatism and diabetes. He played a role in the attempted removal of Sir Joshua Reynolds as president in 1790 and contributed many reminiscences to Farington’s projected history of the progress of the arts in England. In 1796 he and his friend George Dance (whose portrait of Tyler hangs in Burlington House) became the Academy’s first auditors. They put the financial affairs of the Academy onto a more professional footing and several of their reforms are still in force. In 1799 Tyler was presented with a silver cup for his efforts. He wrote a short account of his own life for the first volume of Dance’s Portraits of Academicians in 1798.

Tyler died in his house in Caroline Street, Bedford Square, on 6 September, 1801. In his will he requested to be buried in the family vault in the churchyard of Tottenham High Cross. He left £1,000 in shares to pay for the apprenticeship of his son William Jackson, who was then ten years old and lived with his mother Mary Jackson at Overton, near Ellesmere, Salop.

Despite early financial difficulties, Tyler’s practice in sculpture and architecture had ultimately been profitable: he left property in Upper Seymour Street, Portman Square, Gower Street and Bedford Square, and a sum of £2,450 in named and numbered gifts, including £100 to Robert Ashton II. He also left provision for his sister, Mary.

On seeing the press report of the death of his ‘worthy friend,’ Farington, wrote a brief tribute in his diary to a ‘cheerful’ and ‘good-humoured’ man whose ‘convivial and social turn of mind’ had done much to bring harmony to an often factious Royal Academy (Farington, vol 5, 1618).

The reactions of other contemporaries were less generous, for Tyler’s artistic abilities were not felt to be equal to his status as an Academician. Nathaniel Marchant said he ‘was no artist,’ whilst King George III, in conversation with Benjamin West after Tyler’s death, was baffled as to how such ‘an odd man’ came to be an Academician at all (Farington, vol 3, 827; vol 6, 2214).

The short notice of Tyler in the DNB (1885-1900) dismissed him as a sculptor of little ability, and Whinney has subsequently called him ‘relatively unimportant’ (Whinney 1988, 269).

Gunnis however felt that Tyler’s busts were ‘extremely well modelled’ and that his monuments had ‘great charm’ (Gunnis 1968, 404).

More recently Baker has provided a new biography for the ODNB and he concludes that Tyler’s monuments are stylistically progressive and show a high quality of execution, whilst Tyler himself deserves recognition for his role in the institutions which shaped sculptural practice in the late-18th century. (Inf. Roger Smith)
MGS 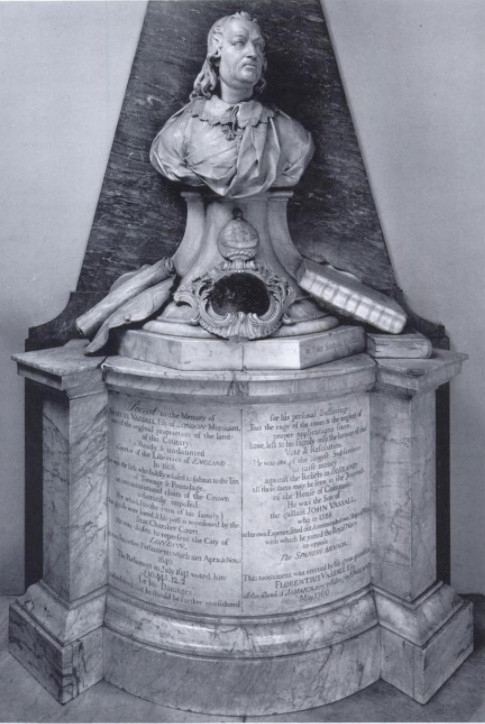 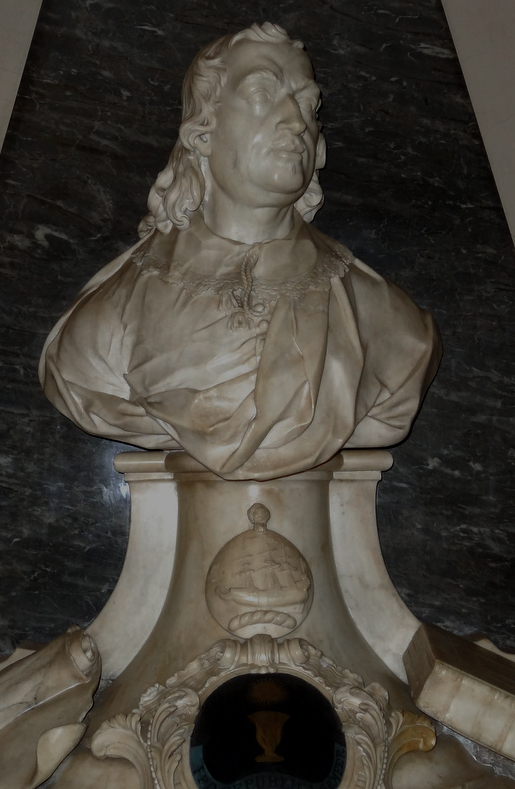 Posted by David Bridgwater at 07:42 No comments: