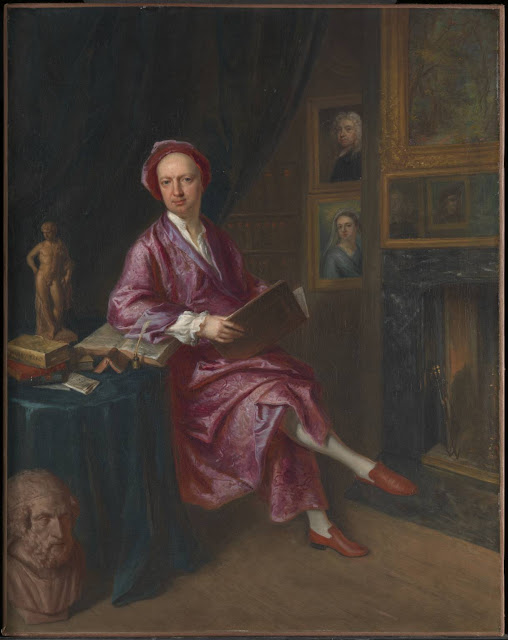 Portrait of the Artist's Son, Jonathan Richardson the Younger, in his Study c. 1734. 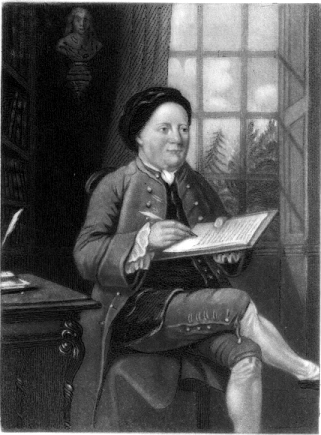 Posted by David Bridgwater at 16:32 No comments:

Hogarth - Sculpture in the Paintings

Busts in the paintings of Hogarth 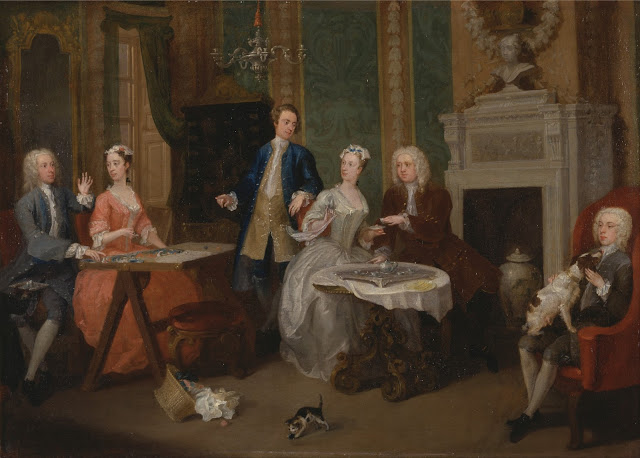 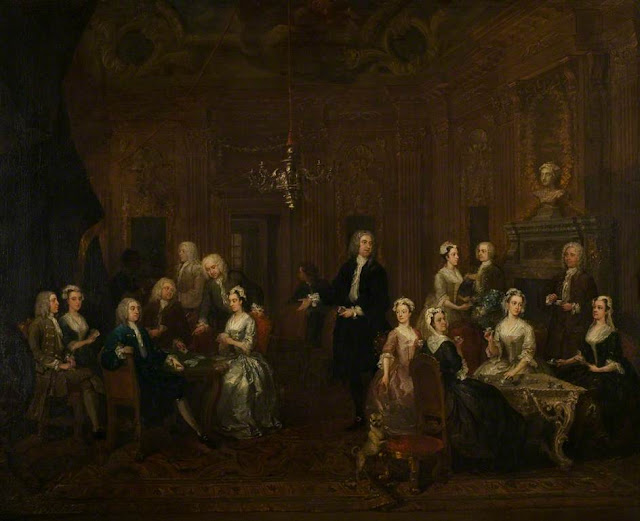 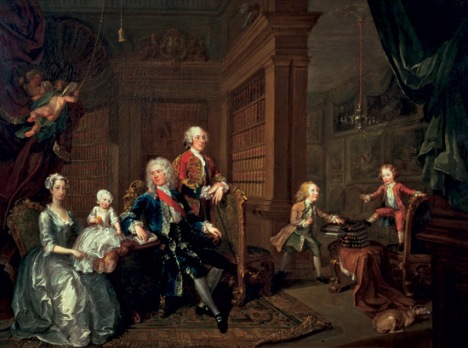 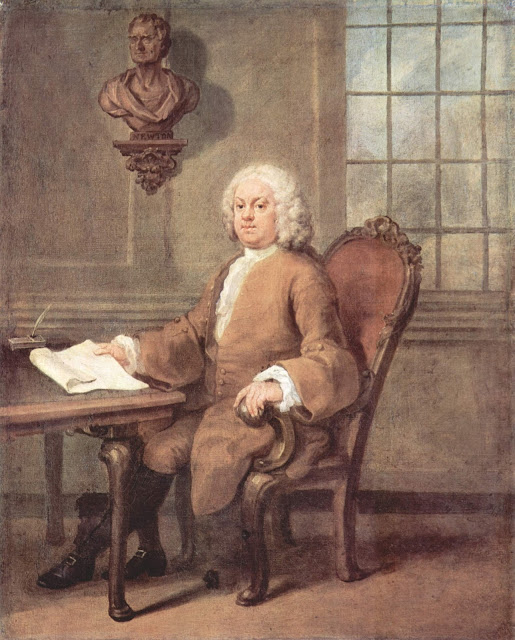 Notes -
educated at St Catharine's College, Cambridge and ordained a priest in 1700. He was rector of St Peter-le-Poor, London, from 1704 to 1724, and of St Leonard's, Streatham, from 1710 to 1723. His participation in controversy began at the beginning of his career, when he advocated conformity of the religious rites from the Scottish and English churches for the sake of union. He became a leader of the low church and found favour with the Whig party.
He battled with Francis Atterbury, who was the spokesman for the high church group and Tory leader on the subject of passive obedience and non-resistance (i.e. obedience of divines that would not involve swearing allegiance or changing their eucharistic rites but would also not involve denunciation of the Established Church practices). The House of Commons, dominated by Whigs, recommended him to Queen Anne, and he became rector of Streatham in 1710. When George I succeeded to the throne, he became chaplain to the King and made bishop of Bangor in 1716.
In 1717, his sermon on "The Nature of the Kingdom of Christ" provoked the Bangorian controversy. He was then translated three more times, taking up different bishoprics. He maintained that the eucharist was purely a commemorative act without any divine intervention. During his time as bishop, he rarely visited his dioceses and lived, instead, in London, where he was very active in politics.

From later summer 1722 to January 1725 Hoadly published letters on contemporary topics, articulating his Whig principles and defending the Glorious Revolution of 1688. The Revolution had created "that Limited Form of Government which is our only Security" and such a government secured freedom of expression, without which Britons would suffer "all the Mischiefs, of Darkness in the Intellectual World, of Baseness in the Moral World, and of Slavery in the Political World". Hoadly also criticised the Pretender, who issued a declaration that he would extinguish opposition. Hoadly wrote that he would impose uniformity on all if he ruled: "Not only that he must destroy your Civil and Religious Rights, but that he plainly before-hand has here told You, to your Face, He will do so".

Hogarth (1697–1764) painted his portrait several times including as Bishop of Winchester and "Prelate of the Most Noble Order of the Garter" about 1743, etched by Bernard Baron (1696–1762). Hoadly's son Benjamin aided Hogarth with his The Analysis of Beauty 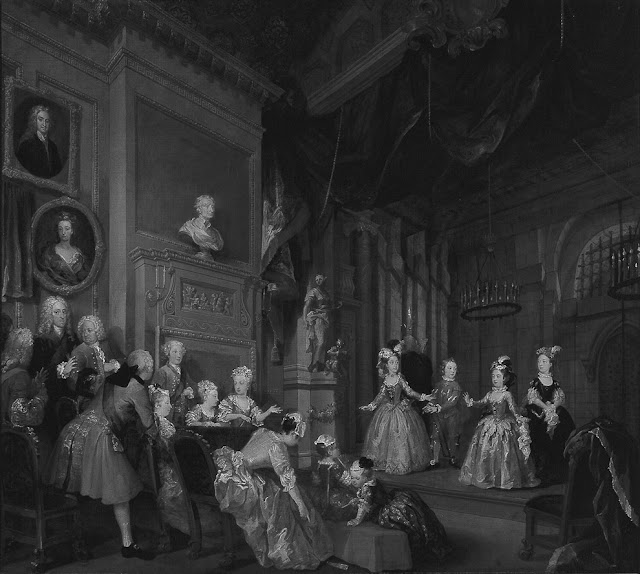 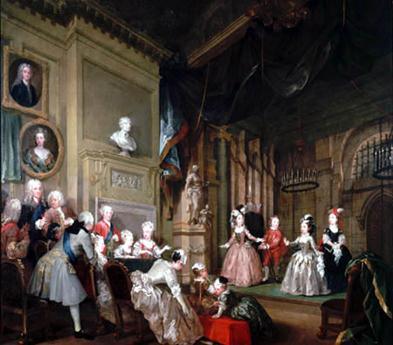 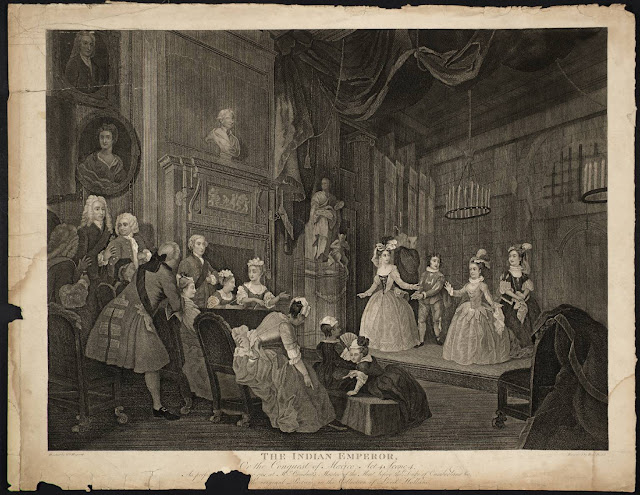 Writing-engraving (with some losses through damage to the paper) ‘Painted by Wm Hogarth|Engrav'd by Rob! Dodd|THE INDIAN EMPEROR,|Or the Conquest of Mexico; Act 4. Scene 4.|As perfor [...]r 1731, at Mr. Conduit's, Master of the Mint, before the Duke of Cumberland & c|[...] the original Picture in the Collection of Lord Holland.|Publish'd Jan.y 1 1792, by J. & J. Boydell, Cheapside, & at the Shakespeare Gallery Pall Mall.’
Transferred from the reference collection 1973.

The scene, the original painting for which is still in the collection of Lord Holland's descendants, shows a private children's performance of Dryden's The Indian Emperor or The Conquest of Mexico, produced by John Conduitt, Master of the Mint, at his town house in Hanover Square, and repeated at the Duke of Cumberland's request at St James's Palace before the Royal Family on 27 April 1732. Conduitt commissioned Hogarth to commemorate the occasion with a conversation piece ‘of the young People of Quality that acted at his house’. Hence Boydell's much later key to the sitters, which identifies some of the grown-ups whose heads are averted, is unlikely to be accurate (see below). In Boydell's Catalogue of Plates, 1803, Dodd's print is described as a companion to Blake's engraving of ‘The Beggar's Opera’ 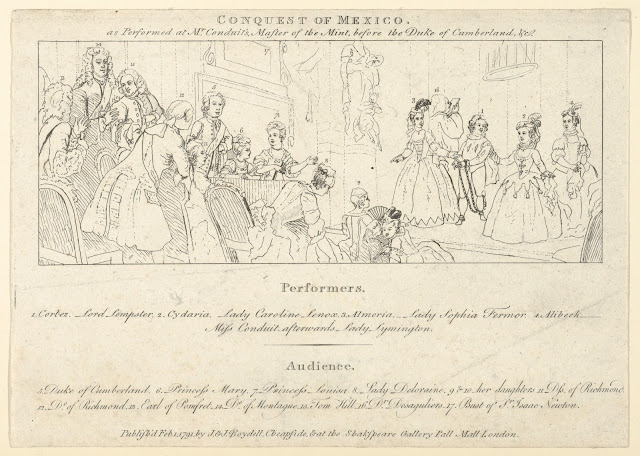 This key to the print above is not to be trusted! 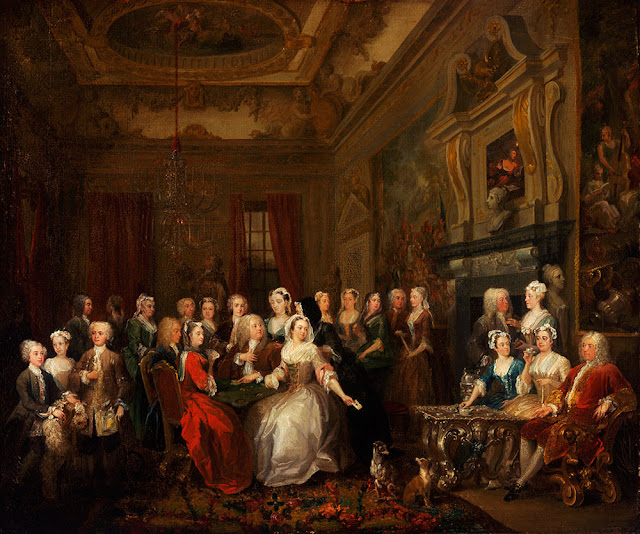 The Assembly at Wanstead House by William Hogarth painted between 1728 & 1731. The Child family has gathered for tea drinking and card playing in the ballroom of Wanstead House. The painting probably records the celebration of the 1728 25th wedding anniversary of Richard Child and Dorothy Glynne Child, Lord and Lady Castlemaine. Dressed in rich red velvet, Lord Castlemaine is seated on the far right at an ornate silver tea-table with his twin daughters whilst his wife, playing cards in the centre, turns towards her husband and shows him her winning card, the ace of spades, alluding to their winning partnership. The couple's other children stand at the far left.

For a very full and thorough explanation of this painting see - 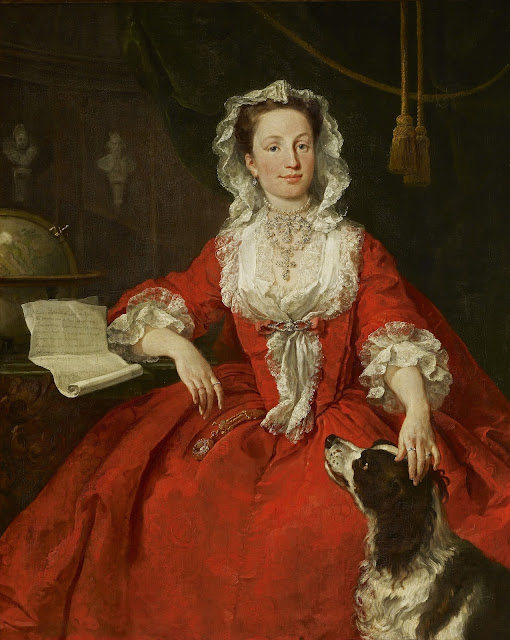 Mary Edwards (1705 – 43), one of the richest women of her time, inheriting at more than £50,000 a year and extensive properties from her father Francis Edwards of Welham, Rutland. She repudiated her hasty Fleet wedding in 1731 to an extravagant, spendthrift husband Lord Anne Hamilton a son of the 4th Duke of Hamilton, although this was tantamount to declaring her son, Gerard Anne born 4 March 1733 illegitimate. She was Hogarth’s friend and arguably his most significant patron during the decade 1733–43. 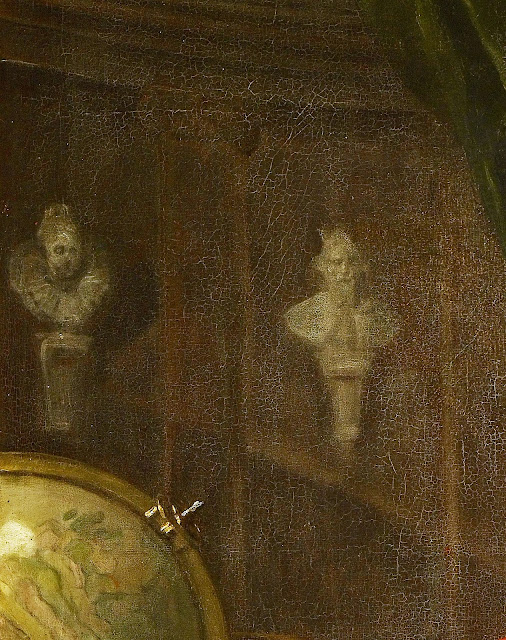 Detail with the busts of Elizabeth I and King Alfred after Rysbrack, in the Hogarth portrait of  Miss Mary Edwards. 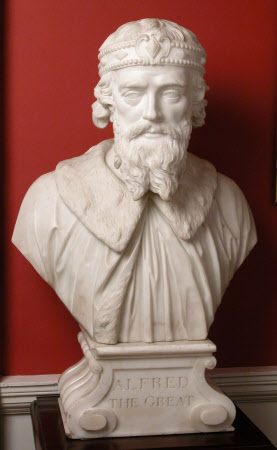 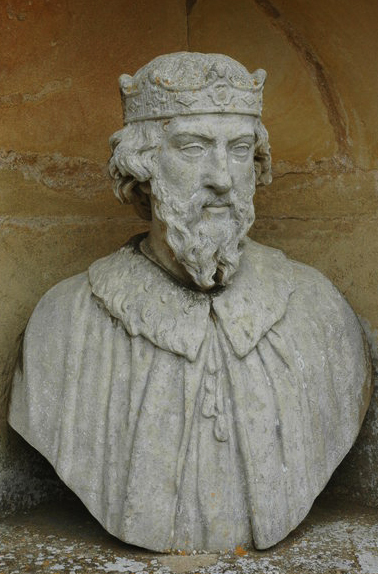 Another version in Portland stone in the Temple of British worthies at Stowe House. Buckinghamshire. 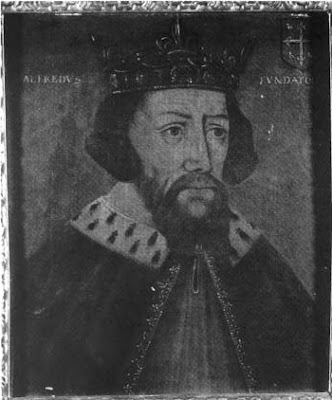 The following engravings are based on a portrait of Alfred the Great (above) commissioned by Thomas Walker Master of University College Oxford in 1661 - 2.
Now in the Masters Lodge. 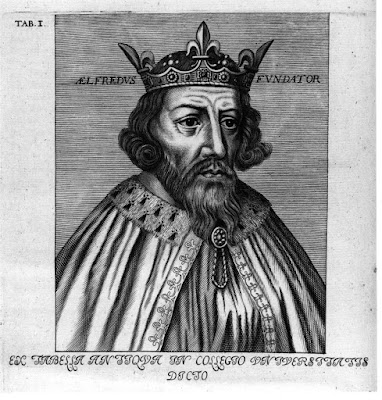 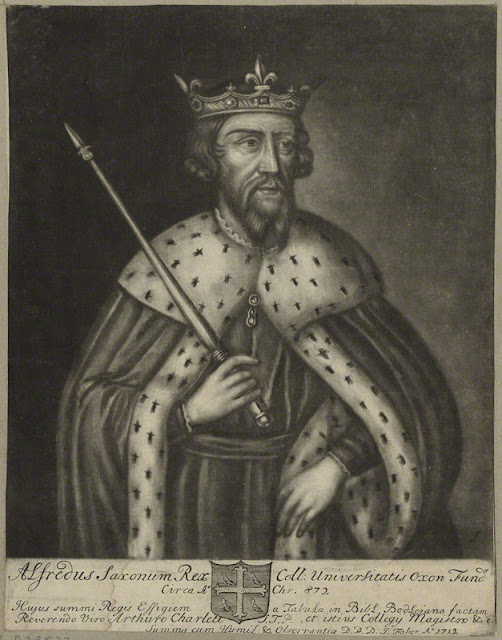 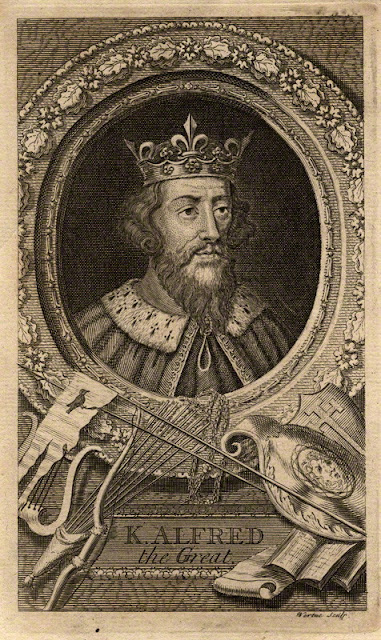 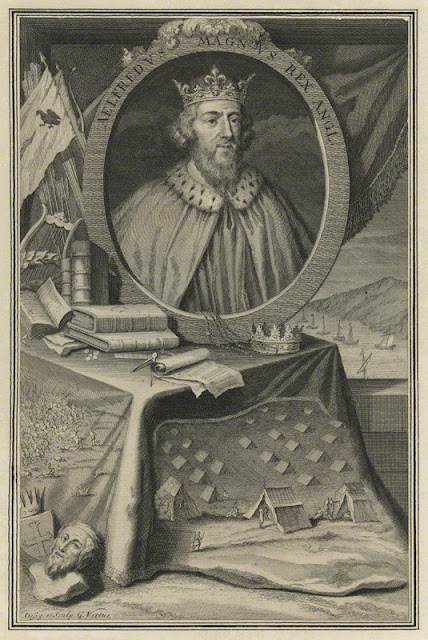 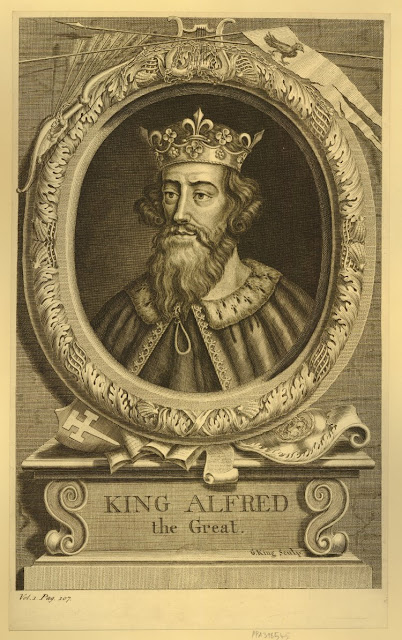 illustration to Rapin's "History of England" (1733 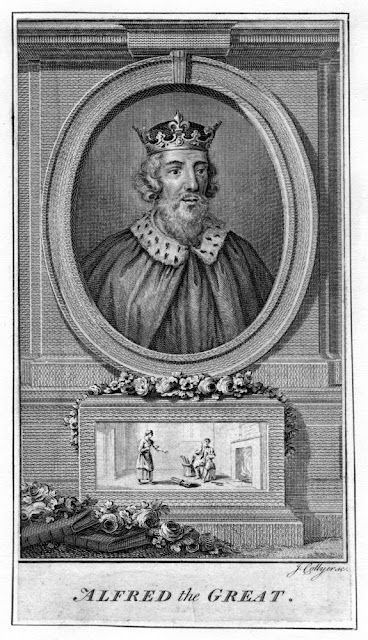 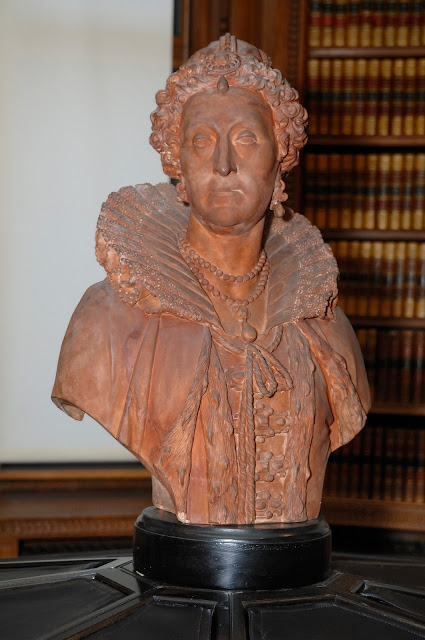 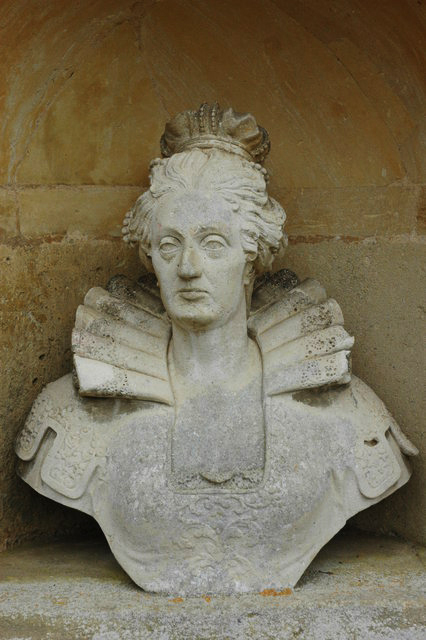 Elizabeth I by Rysbrack Portland stone by 1732.

Temple of worthies with 16 busts by Rysbrack and Scheemakers, designed by William Kent and built 1735. 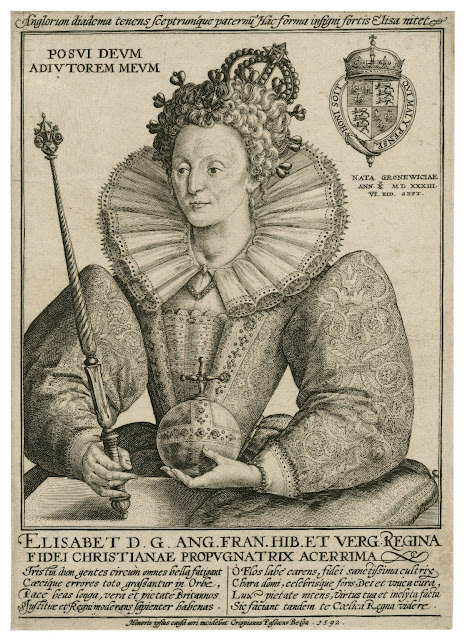 Posted by David Bridgwater at 04:10 No comments: