The Plaster Busts of Alexander Pope by Roubiliac.

There are also 4 Plaster busts of Pope which also might have come from the Roubiliac studio.

The British Museum version which is a softened plaster version of the Barber Terra cotta, which was purchased by Dr Matey at the Roubiliac Sale in 1762, the Felbrigg and Duval versions which are both Shipley types and the Milton/Fitzwilliam Type at Hughendon Manor which appears to be a direct cast from the Milton Marble of this bust although it is very thickly over painted. The inscription Uni Aequus Virtuti Atque ejus Amicus.
can just be made out. See the Roubiliac sale catalogue (B.M.). 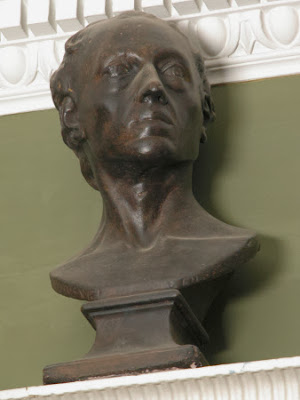 The Hughenden Bust of Pope.
Any others busts in Marble or plaster would appear to be copies by Nollekens, Cheere, Flaxman the elder etc.
Posted by David Bridgwater at 04:42 No comments:

The Marble busts of Alexander Pope by Louis Francois Roubiliac

The research herein builds on the groundwork laid down by William Kurtz Wimsatt in his excellent work The Portraits of Alexander Pope. Published by Yale in 1965, and should perhaps be read in conjunction with that work. Mrs Esdailes work - Louis Francois Roubiliac of 1928 should be treated with extreme caution.

As far as can be ascertained there are ten marble busts extant which appear to be directly from the workshop of Roubiliac.

There are three distinct basic types of these Roubiliac Pope busts, which show him ageing quite rapidly over the period of five years from 1737 to 1741.
Pope was a sufferer of Potts disease, a progressive tuberculosis of the bones causing curvature of the spine and slowly crushing the internal organs. In July of 1740 he wrote to Ralph Allan about visiting Bath but pleads ill health “I am in no pain but my case is not curable and must in course of time, as it does not diminish, become painful first then fatal” He suffered a serious infection in his kidneys and urinary tract which was operated upon by the surgeon Cheselden (who also sat to Roubiliac) in August of 1740, which goes a some way to explain the obvious deterioration in the appearance of his physiognomy between 1737 and 1741.


There are the four signed and dated, ad vivum marble busts of Pope considered to be by Roubiliac These are -


The Roseberry bust now at Yale. (The terra cotta at the Barber Institute, Birmingham would appear to be the prototype of the later two).


The Seward Bust in a private collection and the Roger Warner bust currently with Philip Mould, which were the two sold at the posthumous Roubiliac sale, lots 75 the head and 76 the bust of Pope 4th day, 15 May 1762

There are then a further four unsigned marble busts -The V&A Bust, The Saltwood Bust, the Windsor Castle Bust and the Poulet Bust (originally paired with a bust of Newton and now at Waddesden Manor). All four are based on the Barber Terra cotta type. 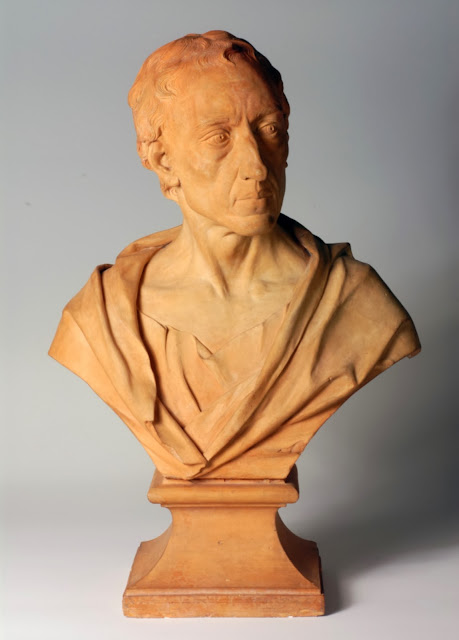 The Terra Cotta bust of Alexander Pope in the Barber Institute, Birmingham.
Posted by David Bridgwater at 04:15 No comments: