1 . The Bust of Alexander Pope owned by William Seward


A Marble Bust of Pope; almost certainly the unfinished Bust left in the Roubiliac Studio in St Martin's Lane and sold on the fourth day of the sale of the contents, Sat. 15 May 1762, lot 75. 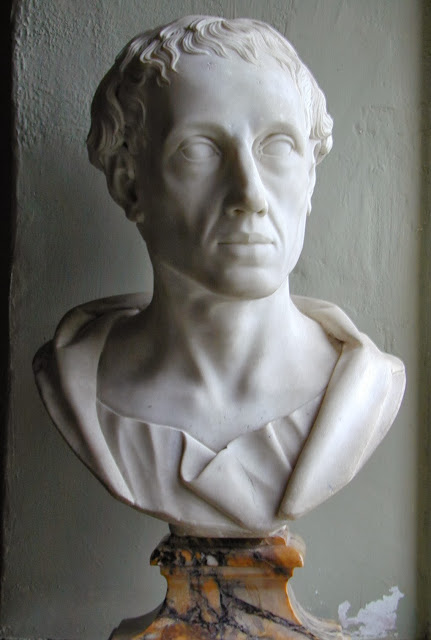 The William Seward bust of Alexander Pope by Louis Francois Roubiliac, circa 1737/38.


See Wimsatt. The Portraits of Alexander Pope page 265 for an illustration of the 1788 print of this bust, and page 266 for the text and also Wimsatt supplement p.147, and plate 13. 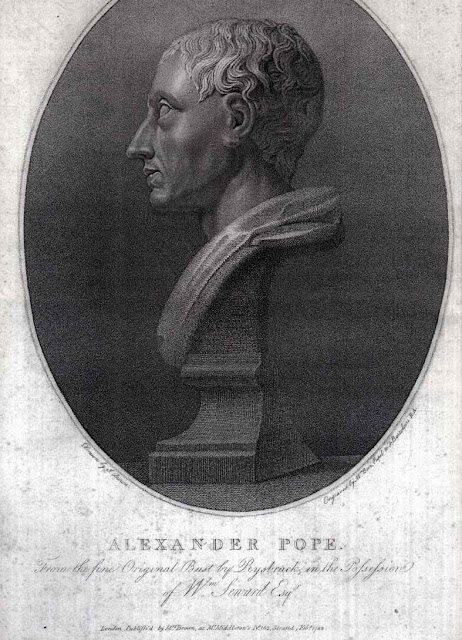 Stipple Engraving of the bust in the possession of William Seward of Alexander Pope by Roubiliac dated 1788, drawn by John Brown and engraved by Marino Bovi. Misattributed to Rysbrack. (He got the R and ac nearly right).


Carved from white statuary marble with associated original Square Tapered Convent Sienna marble Socle. It retains its original unpolished surface. The individual locks of hair have been sculpted but the finer details of the curls and eyebrows remain unfinished. 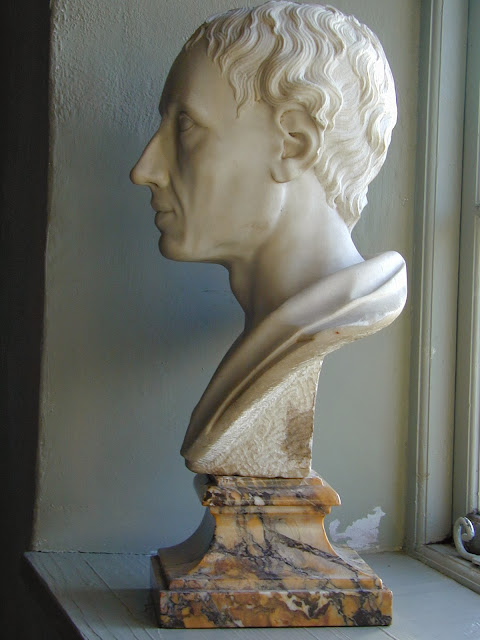 The William Seward Bust of Pope - The Socle has been turned around - it is flat on the back as in the engraving.


The conformation of the curls is exactly the same as in the first signed and dated version of 1738, now at Temple Newsam, but not as in the later Milton / Fitzwilliam or Barber Institute Type busts.

The Seward bust appears to be an earlier slightly more upright and younger looking version of the signed and dated version at Temple Newsam of 1738. (These busts have been photographed together for comparison.)


The Seward bust is unfinished. The locks of hair have been cut but the hairs have not received the final chiselling. The cutting of the back of the bust and the socle would suggest that it was created for a specific site but never finished and installed.


It would seem that workshop practice at the time was to finish the surface of the marble with a fine abrasive probably pumice, before the final cutting of the hair, eyebrows and then the beeswax polish was applied. This process was never completed with the Seward bust.


The back of the bust is roughly finished with a claw chisel and is very similar to the unsigned bust of Isaac Ware now in the National Portrait Gallery, London. Whilst the later busts of Roubiliac all have finished backs the backs of the early busts by Roubiliac seem to follow no set pattern particularly the various versions of the Pope bust and the early bust of Isaac Ware.


Although left unfinished this bust would appear to be the earliest version of Roubiliac's busts of Alexander Pope. He appears idealised - younger, healthier and perhaps more classically handsome than in any of the other later busts by Roubiliac.


This bust, I believe to be lot 75, described as a bust of Pope, in the only remaining Roubiliac sale catalogue now in the Finberg Collection at the British Museum, is one of the two marble busts left in the Roubiliac studio at the time of his death and subsequently sold by Langfords of Covent Garden on the fourth day of the sale of the contents of the studio on 15 May 1762.

The following bust no. 2 in this list, The Roger Warner / Philip Mould bust, I believe to be Lot 76 in the sale and described as a head of Pope in the catalogue of the sale. 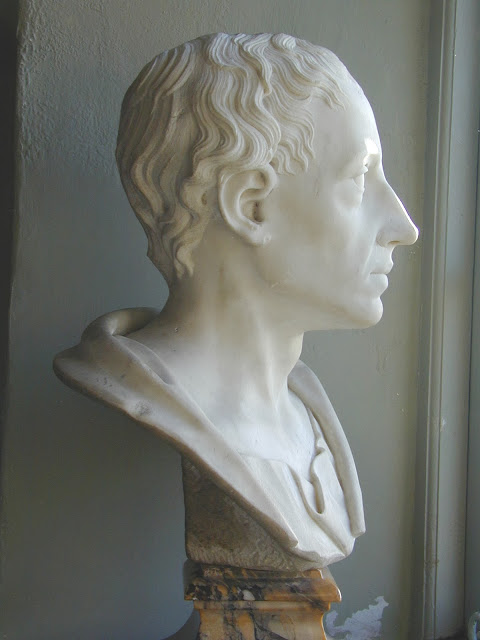 A profile view of the Seward bust by Roubiliac.

The Seward Bust has the same detailing, particularly in the locks of hair, as the first signed and dated bust of 1738 now at Temple Newsam, the detail of the locks of hair on the later 1740 Milton and the 1741 later Barber type busts is quite different. This would suggest that the Temple Newsam and Seward busts are near contemporary with each other. 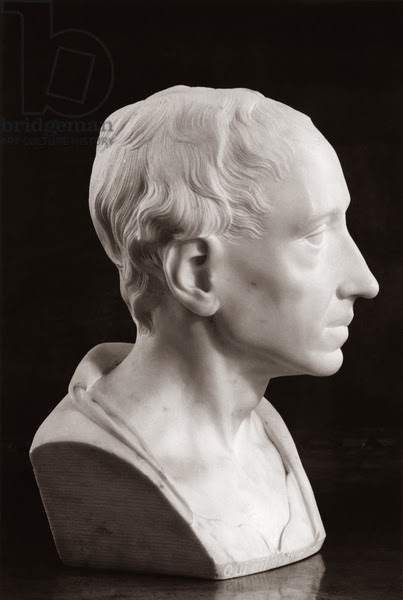 The Temple Newsam bust of Alexander Pope by Roubiliac, 1738.

Compare the cutting of the hair with the Seward bust.

The Temple Newsam version is truncated. The detail of the lower folds of the chemise visible on the Seward bust and the later Barber type busts is not visible on the Temple Newsam version. It therefore follows that the Seward bust could not be a copy by another sculptor because of the relationship of the detailing on the early and the later busts.


These details would point to the fact that the Seward bust is the earliest version of the Roubiliac Pope busts, probably based on a missing clay or terracotta.


The Stipple Engraving of the Seward Bust of Pope of 1788.


The Seward bust of Pope is illustrated, but wrongly attributed to Micheal Rysbrack in a 1788 stipple engraving, which is inscribed -

Drawn by J. Brown and engraved by Marino Bovi, a pupil of F. Bartolozzi R.A.

Entitled - Alexander Pope from the fine Original Bust by Rysbrack, in the Possession of Wm. Seward Esqr. London, Published by Mrs. Brown, at Mr. Middltons, No. 162 Strand, Feby. 1788.


The print was published posthumously by Mrs Brown. John Brown 1749 - 87 was a Scottish artist, pupil of Alexander Runciman and was a close acquaintance of Henry Fuseli whom he met in Rome, whilst he was employed by William Townley and Sir William Young from 1769 - 1780.William Seward was in Rome at this time.


This is the first positively identifiable bust of Pope by Roubiliac illustrated in the Eighteenth Century. 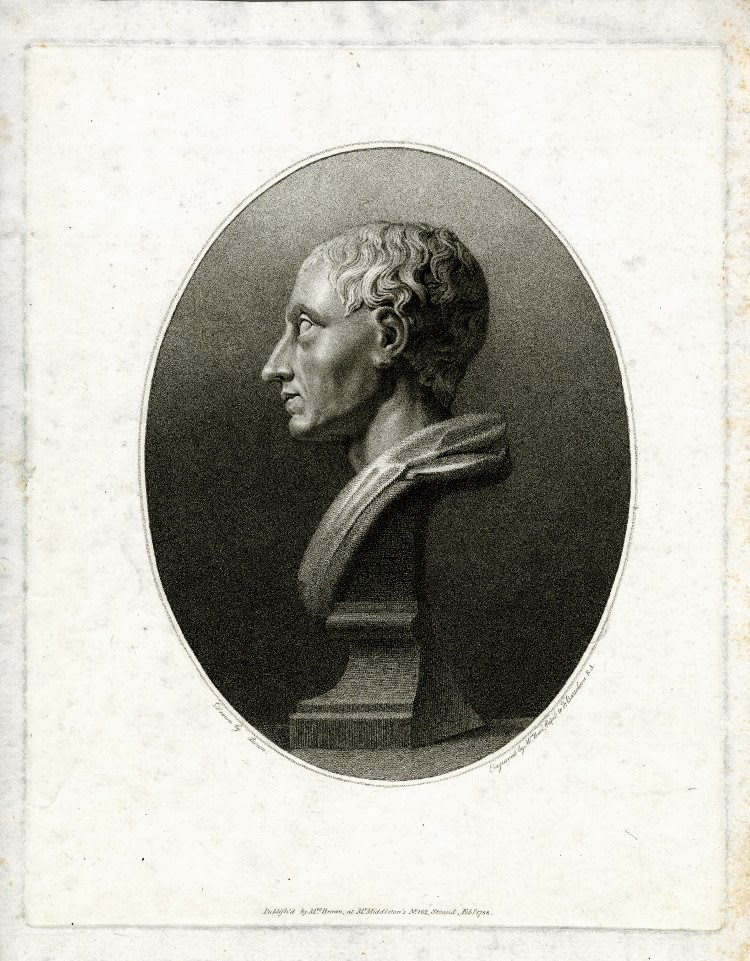 Here is another version of this print in the British Museum -  it is missing the title - probably a proof copy before publishing.

Note. The Eumelian club. A Club in London, founded by the learned and ingenious physician, Dr. Ash, in honour of whose name it was called Eumelian, from the Greek [Greek: Eumelias]; though it was warmly contended, and even put to a vote, that it should have the more obvious appellation of Fraxinean, from the Latin. BOSWELL. This club, founded in 1788, met at the Blenheim Tavern, Bond-street. Reynolds, Boswell, Dr Burney, Sir George Baker F.R.S. John Heaviside and Windham were members. Rose's Biog. Dict. ii. 240.


The father of William Seward was a partner in Calvert and Seward of Red Cross Street the largest brewers in London in the Mid Eighteenth Century.

Note: The Thrales of Streatham owned the second largest brewery in London, known as the Anchor Brewery in Southwark which was sold in 1781 to the Quaker bankers David Barclay of Barclay, Bevan (Sylvanus Bevan III) and Bening,

See further references to Quaker Sylvanus Bevan I, apothecary and sculptor in the Vandewall family history to follow.


Seward asked Nollekins unsuccessfully to give him his ‘Michel Angelos model of Venus.’
Seward lodged at the Golden Ball, 5 Little Maddox Street. See Smith, J.T: Nollekens and his Times for these refs.


Boswell writes to Dr Johnson 15 July 1777 ” I received Mr. Seward as the friend of Mr and Mrs Thrale and as a gentleman recommended by Dr Johnson to my attention. I have introduced him to Lord Kames, Lord Monboddo and Mr. Nairne. He is gone to the highlands with Dr Gregory. When he returns I shall do more for him”.


15 Jan 1790 Seward writes to Samuel Parr from Maddox St and again on 25 May on behalf of himself, Boswell and Sir Joshua Reynolds with ref. to the epitaph for Samuel Johnsons monument in St Pauls Cathedral

Seward was a close friend of Dr Johnson is mentioned on numerous occasions in Boswell's - Life of Johnson, and frequently in The Journals and Letters of Fanny Burney and the Diaries of Hester Lynch Thrale.