The Milton Fitzwilliam bust of Alexander Pope signed by Roubiliac


4, The Milton / Fitzwilliam Bust of Alexander Pope by Roubiliac
and a Bronze bust of Pope of the same Pattern sold at Sotheby's London in 2007.

Now confirmed as the bust of Pope originally at Kenwood, belonging to Lord Mansfield. 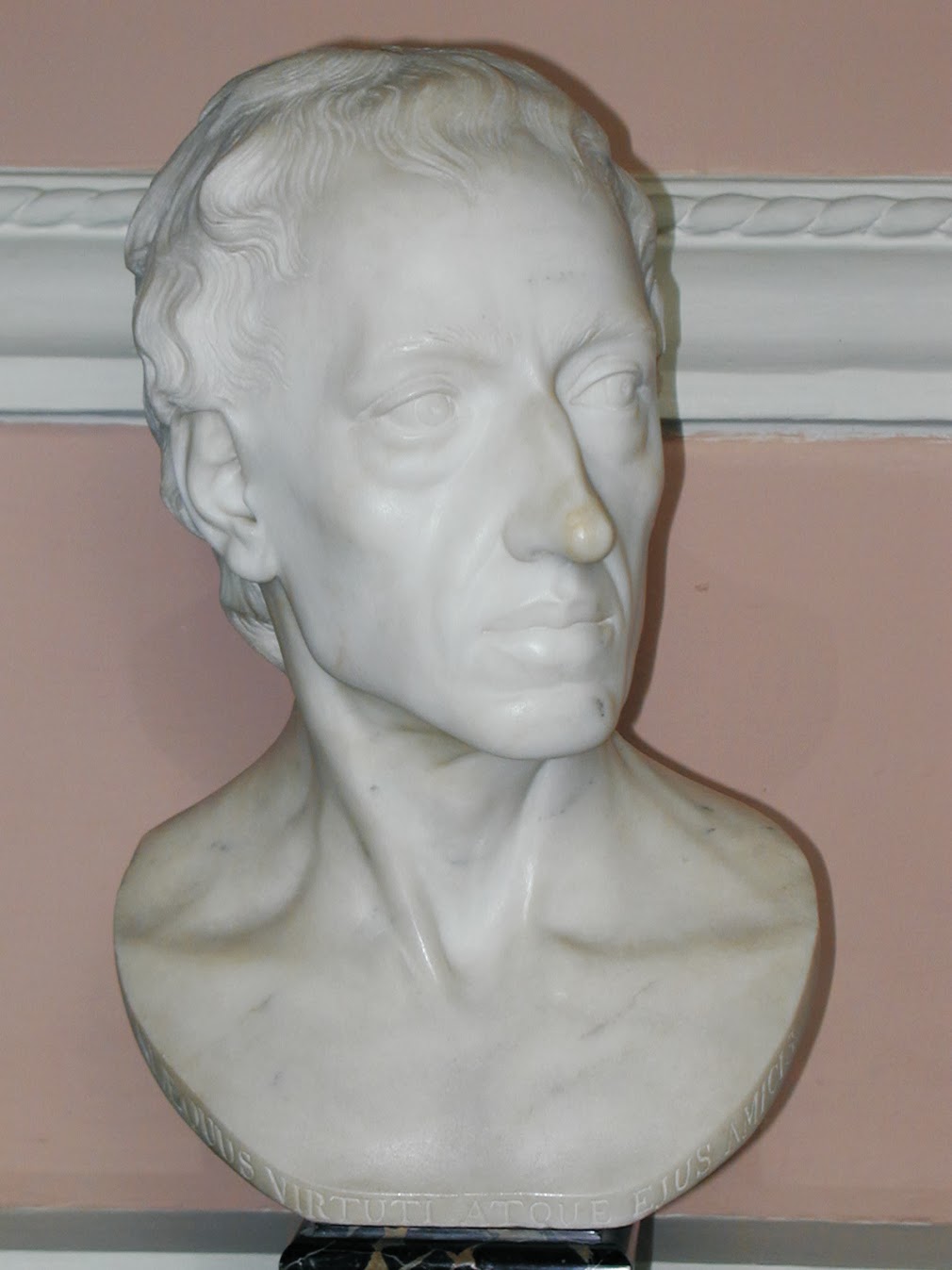 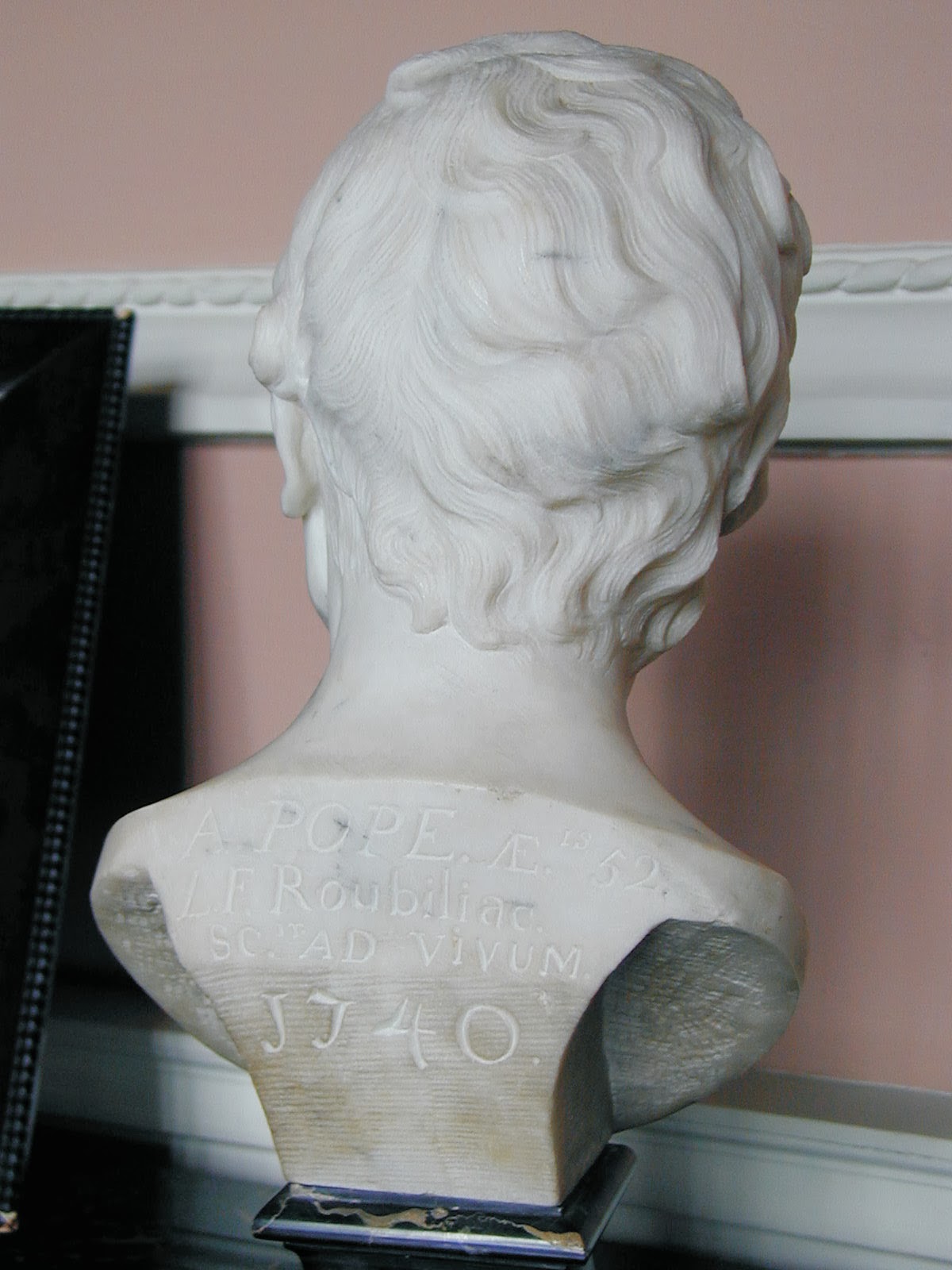 These notes are the results of information supplied to me by the Archives at the Estate Office, Scone Palace, family seat of the Earl of Mansfield in 2002.


A bust of Pope at Kenwood is mentioned in Lysons “ Environs of London” 1795, as being ‘in the Breakfast Palour’.


This bust was not sold in 1922 sale. The contents of Kenwood were sold in 1922, by C.B. King & Co. Sale catalogue at English Heritage, Saville House, Saville Row. London W1.


Lyson, (Environs of London, 1795) mentions the bust of Lord Mansfield by Nollekins in the Library, he mentions another bust of Mansfield when young by Rysbrack in the hall, (now at Scone Palace but without socle) and also one of Sir Isaac Newton and the Homer.


Roubiliac also carved a Marble portrait bust of Lady Elizabeth Finch, Lady Mansfield, (daughter of 2nd Earl of Nottingham and 7th Earl of Winchilsea) delivered in 1748, which is at Kenwood today. The socle of this bust (black with gold veining) matches the Milton / Fitzwilliam bust of Pope

There is a bust of  Lord Mansfield, by Joseph Nollekins R.A. (1737 - 1823), ( sold in the 1922 sale and now returned,) at Kenwood with the family motto ‘Uni Aequus Virtuti’ (faithful to virtue alone), carved beneath the drapery. (Noted as being at Kenwood in the Morning Herald in 1781).

It is perhaps not a co-incidence that the Milton / Fitzwilliam Bust of Pope has carved beneath it ‘Uni Aequus Virtuti Atque ejus Amicus’. A quotation from Horace.

There is also a full length portrait of Mansfield at the National Portrait Gallery. By John Singleton Copley exhibited at the R.A.in 1783, in which, pictured on the door case behind him is a bust of Pope, undraped and with the back cut away as the bust at Milton. It would seem most likely that this is the bust from Kenwood rather than the Temple Newsam version which has a solid back? 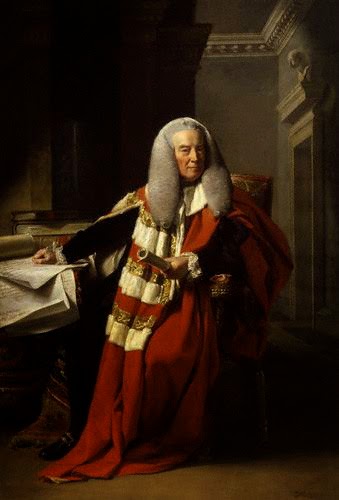 The copies by Nollekins of the Roubiliac bust of Pope are all of the type at Milton with undraped shoulders. The cutting of the individual locks of hair also closely conform. See later entries detailing Nollekins busts of Pope at the Metropolitan Museum, New York, The Bedford Museum version and the version found in Ireland recently (May 2000) with its companion bust of Sterne.

It would seem most likely that for his busts of Pope, Nollekins would have had access to the Milton Bust through Lord Mansfield, and made copies of it, although the Nollekins version are also very close to the Barber type.

Mansfield acquired Kenwood in 1754 from John Stuart, 3rd Earl of Bute, his Political Master. Mansfields town house at Bloomsbury Square along with his library and most of his personal papers was burnt down in the ‘No - Popery’ Gordon Riots of 6 June 1780. The bust of Pope was therefor probably at Kenwood before 1780.

There are inventories for Kenwood available at Scone Palace and whilst the information is not very detailed, it gives a some idea of the portrait sculpture in the house from the end of the eighteenth century until the sale of the contents of the house in 1922.


Mansfield appears not to have been a collector of antiquities like so many of his contemporaries.

Alexander Pope bequeathed to him a marble bust of Homer with square socle in dark marble, which Pope believed to be by Bernini, ( now at Scone Palace, the replacement now at Kenwood is by Joseph Wilton), he also left him a stone bust of Isaac Newton by Guelfi (also now at Scone).

Pope also left his busts of Milton, Spenser, Shakespeare and Dryden all by Scheemakers and given to him by Frederick, Prince of Wales, to the 1st Lord Lyttleton of Hagley Hall.

Information supplied by the Archives at the Estate Office, Scone Palace, family seat of the Earl of Mansfield in 2002.


The lumber room over the Portico. 2 Cases containing Popes belongings.

Conclusion: Not a great deal of care seems to have been taken with these inventories, but the four busts with black pedestals (socles) mentioned in 1795 are almost certainly - 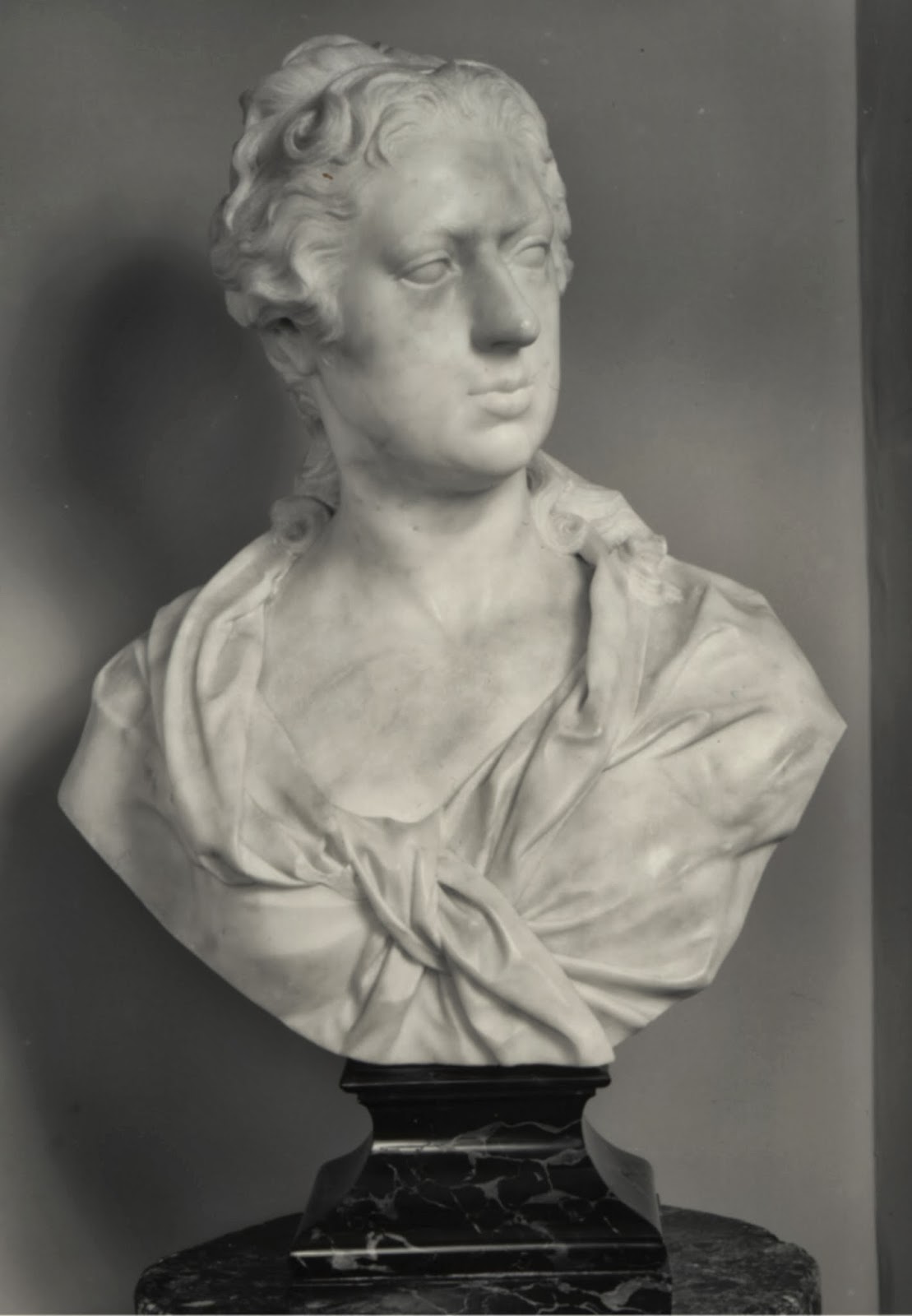 3. Bust of Lady Mansfield by Roubiliac, (now back at Kenwood). 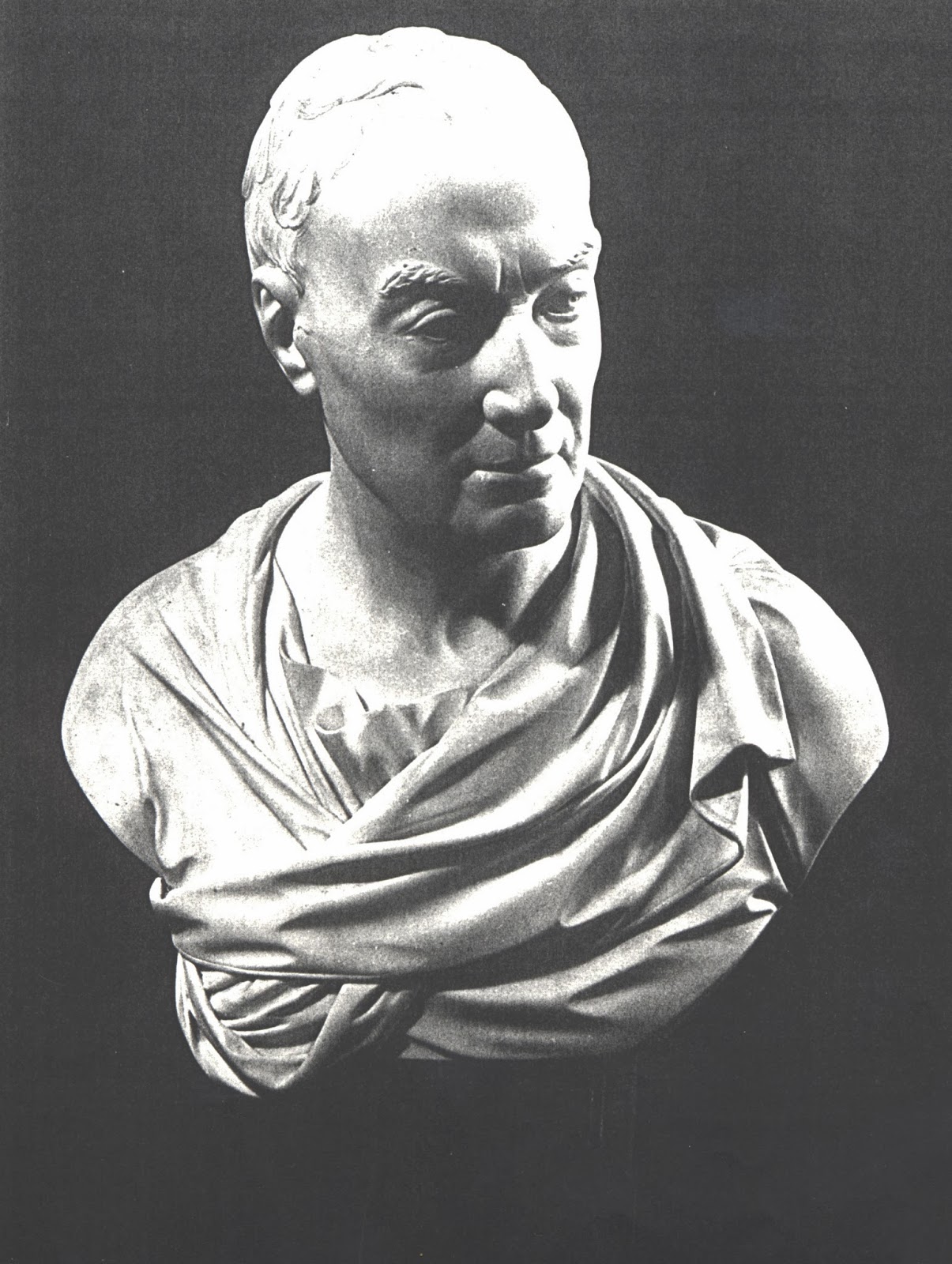 Lord Mansfield by Nollekins 1779 inscribed Uni Aequus Virtuti.
that translates as 'Faithful Unto Virtue Alone'. The motto is taken from Horace's Satires.

Noted at Kenwood in the Morning Herald. 1781.


4. Bust of Lord Mansfield by Nollekins ( now back at Kenwood)

1,3,4, still retain their veined black marble socles. Socle of No. 2 has disappeared.


Reputedly the Plowden-Wardlaw family at Castle Craigie, Ayrshire; by descent to Margaret Spurway, née Plowden - Wardlaw; by descent to the present owner. 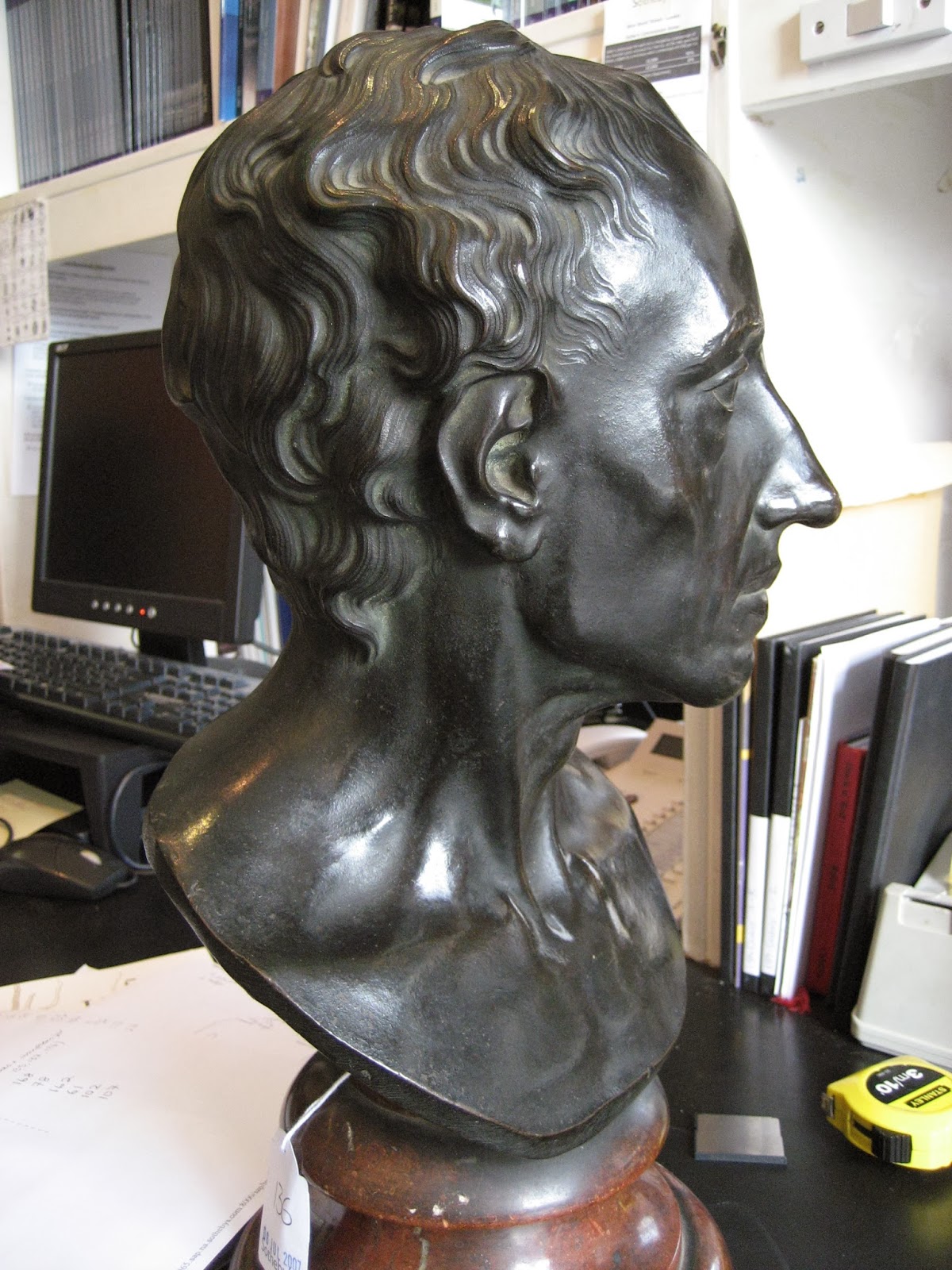 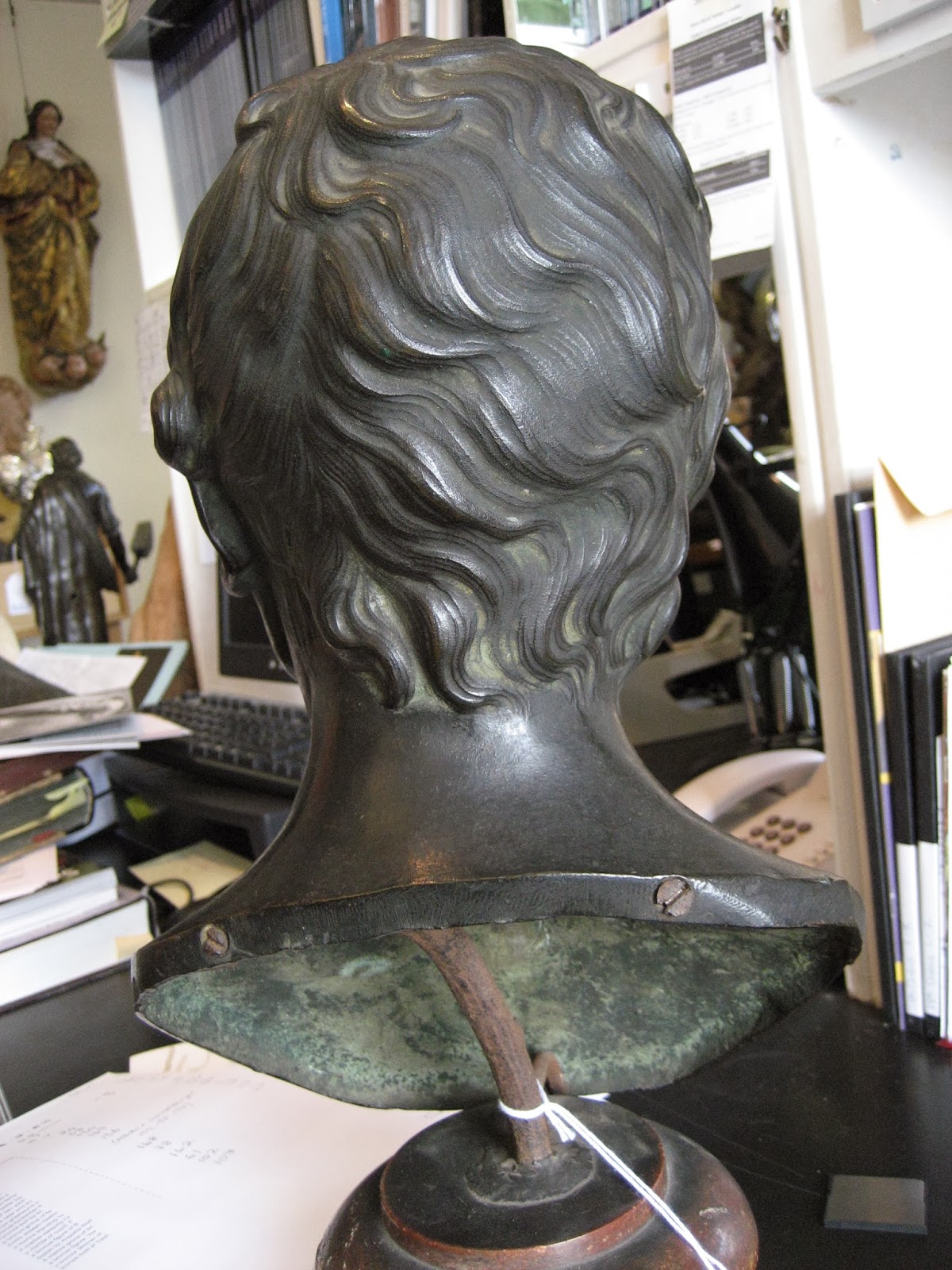 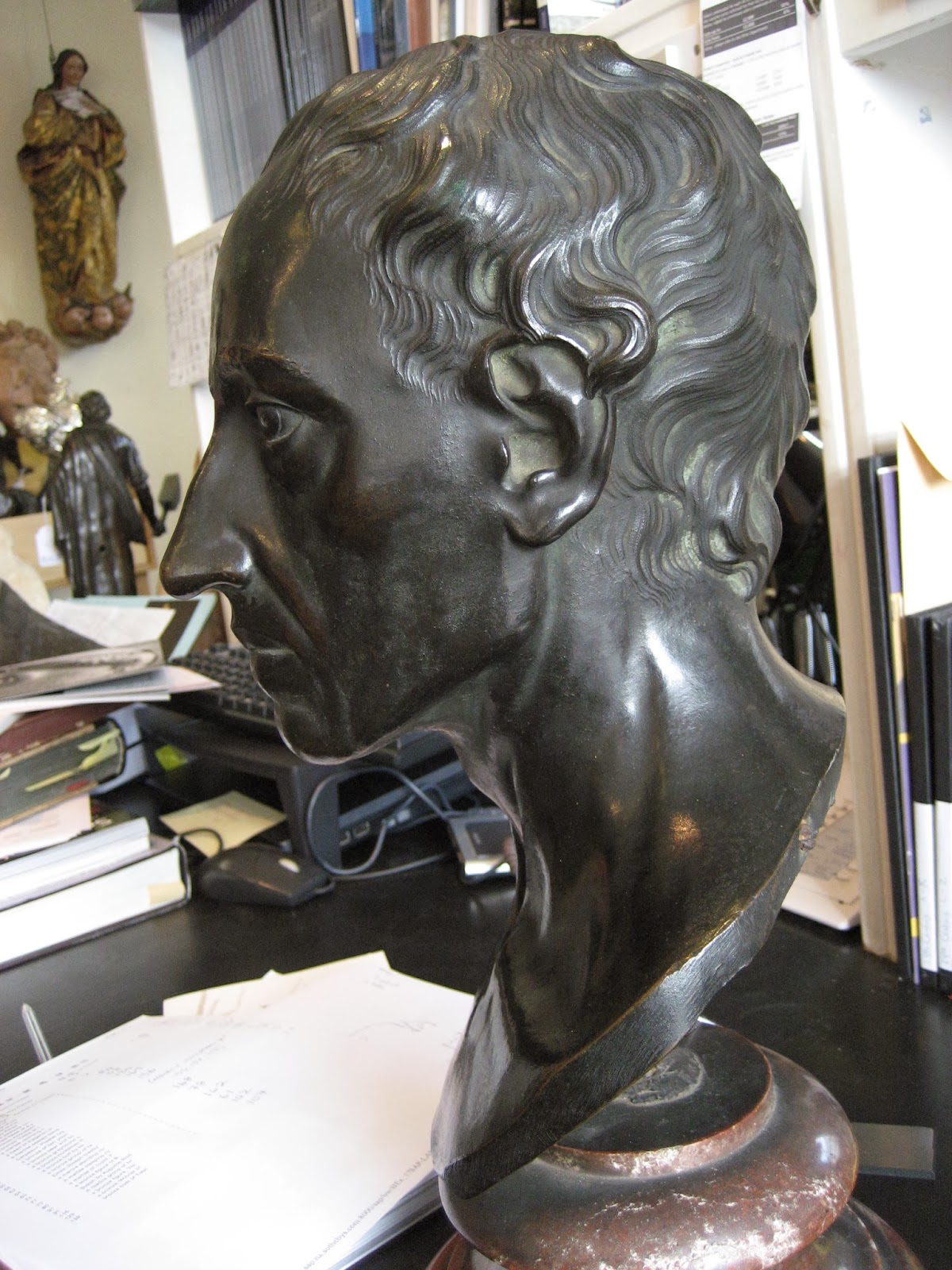 This could be a bust by Roubiliac but it could also be by Nollekins who made at least two marble versions paired with Lawrence Sterne. One pair in the Metropolitan Museum, New York. 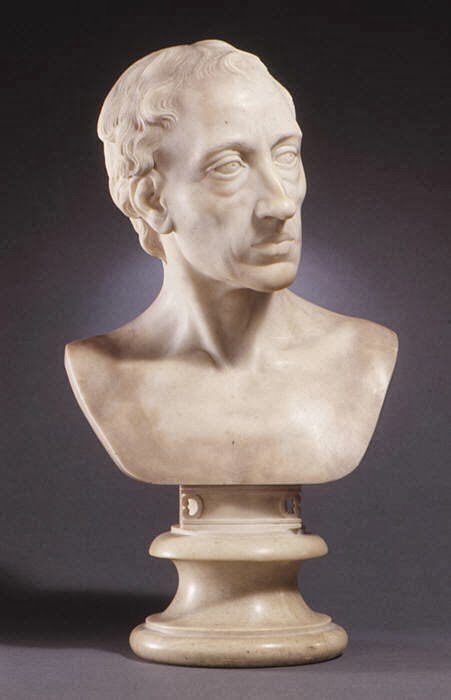 The Metropolitan Museum bust of Pope by Joseph Nollekins

after the Milton/Mansfield Roubiliac bust. 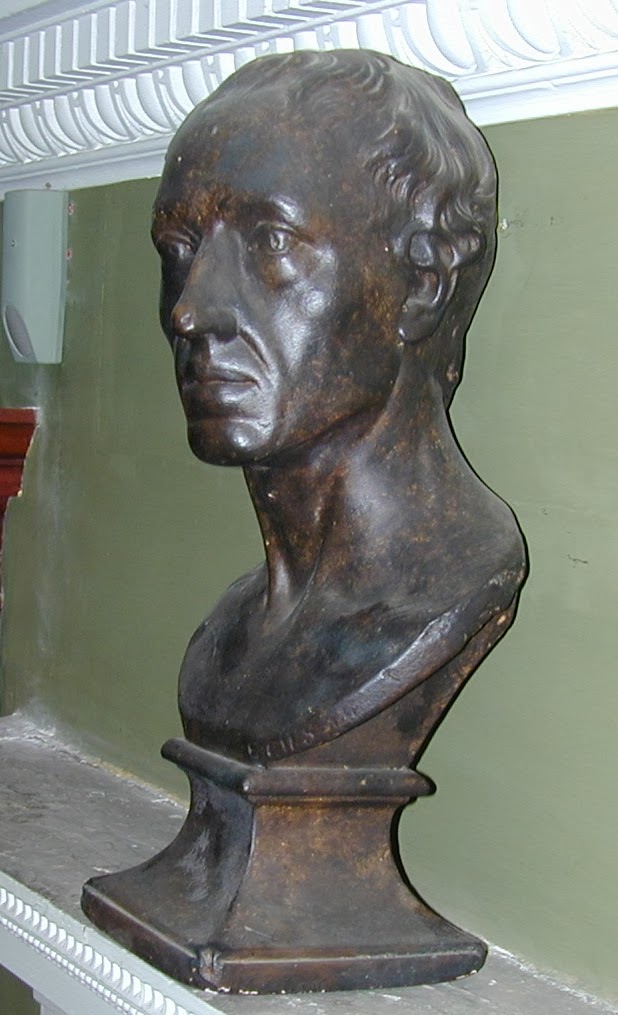 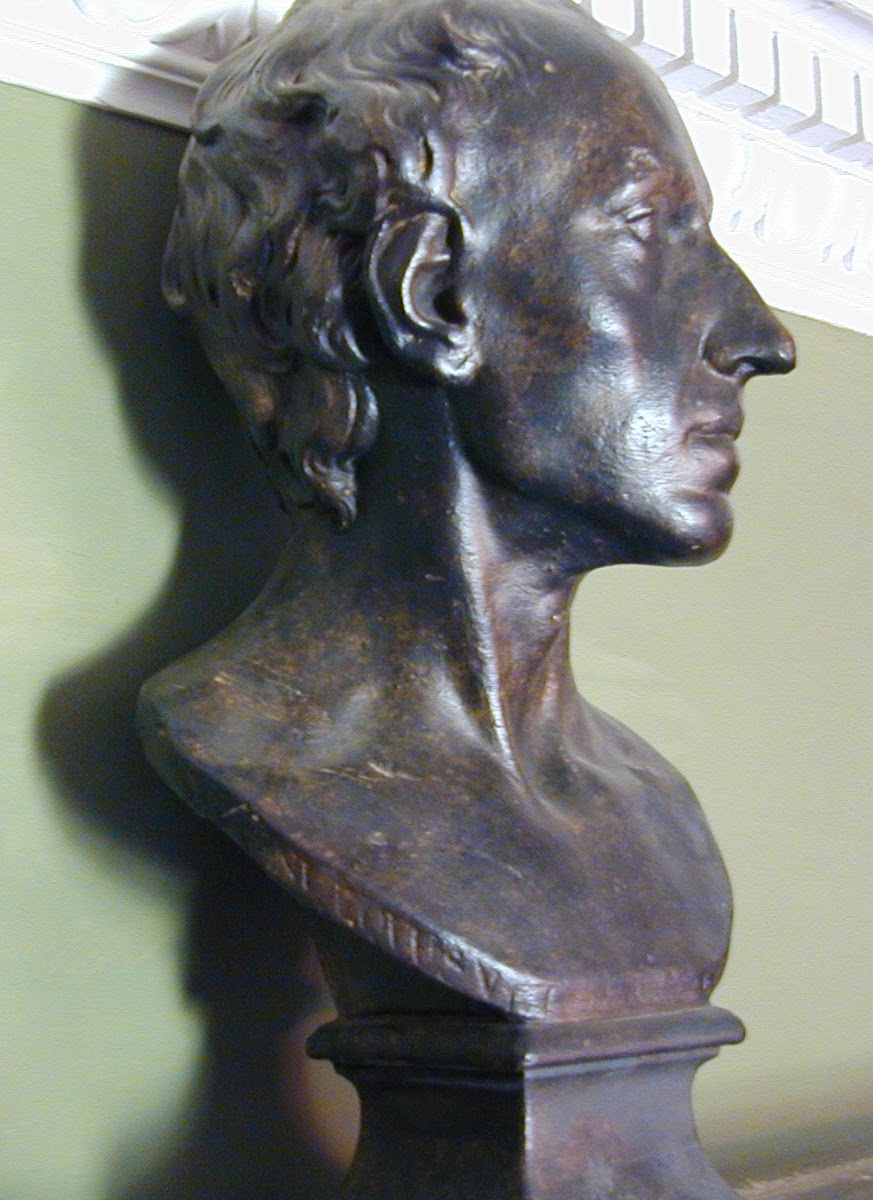 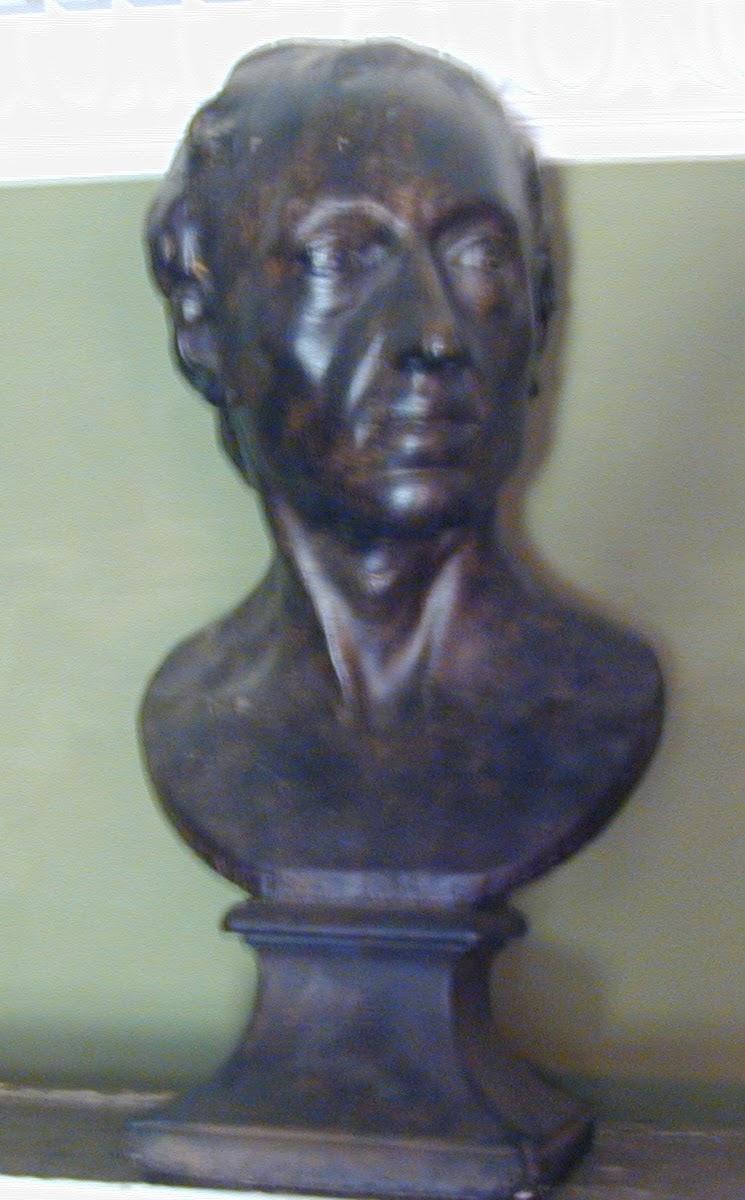 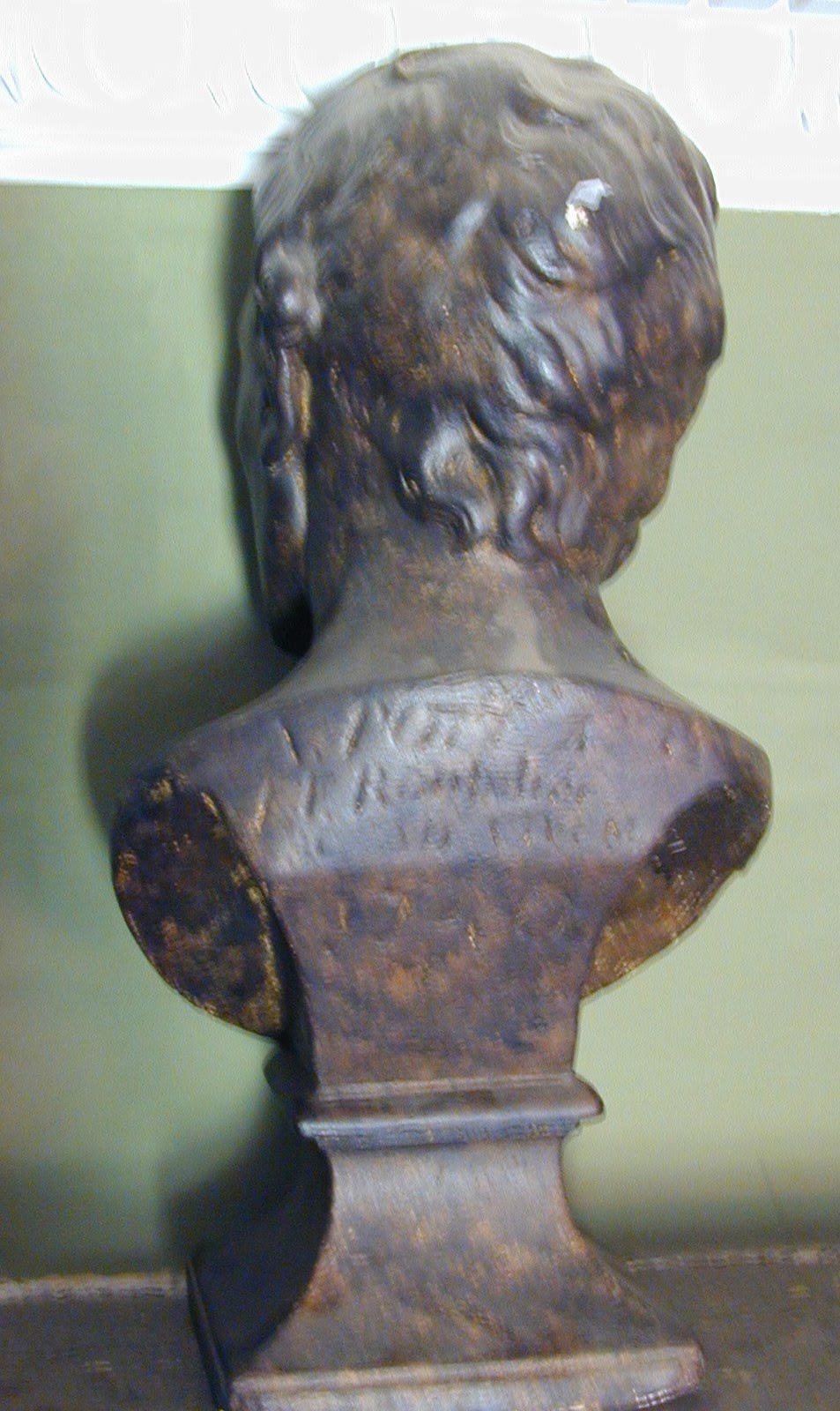 Either taken from the Milton Mansfield Marble (which seems most likely) or from an original terracotta now disappeared.

Posted by David Bridgwater at 13:11