A Few Notes on the Early Career of Roubiliac

It has so far seemed impossible to chart his early life. Some authors have suggested that he worked under the sculptor Balthazar Permoser in Dresden but there is no paper trail.


The first actual mention of him is when he won second prize for Daniel rescuing Susanna at the Academie Royale in Paris.


In 1730 the Acadamie directeur was Louis de Boulogne, the chanceleur was van Cleve, and the recteur was Guillaume Coustou, there were twelve professeurs at the Academie, with life classes for two hours a day and occasional lectures. The process to obtain the prizes went through four stages, a short list was prepared from the students drawings, students were then asked to provide a sketch on a given theme, if then chosen the student was locked into a room at the Academie and asked to provide a sketch or relief of the proposed work, and finally the works were put on public exhibition. Criticisms were invited and then the Academie met in full session in order to grant the prizes.

It has been suggested in the past that Roubilliac was attached to one of the Coustou brothers but I believe a much more likely candidate for his master is Jaques Bousseau (1681 -1761).


notes on Bousseau – worked in the studio of Nicholas Coustou, won the prix de Rome in 1705, worked in Rome 1709 – 12, 1713 at the Academie Royale. 1715 – 20 worked in the studio of Coyzevox, 1726 completed a statue started by Fremin and Bertrand, 1729, worked for Cardinall de Noailles on his family chapel in Notre Dame de Paris. 1736 at the suggestion of Fremin he was invited to complete the project to complete the scultural decoration at the garden of La Granja de San Ildefonsore for Philip V of Spain, 1738 he was appointed Premier Sculpteur du Roi. 1761 died at Valsain, Spain.

Roubiliac provided a letter of introduction to Jaques Bousseau for the English painter Highmore (1692 - 1780) who was visiting Paris in 1734.


Bousseau took Highmore to the Luxembourg on Saturday 8th June and to the Tuilleries on Sunday 9th of June, on Monday 9th he took him to his own studio and then to the Louvre Whilst circumstantial it suggests a certain intimacy between Roubiliac and Bousseau. It also suggests that Roubiliac was moving in the centre of Londons artistic circle by this time.

Note. Gravelot (1699 – 1773) born Hubert Francois Bourguignon, after a perpetetic early life arrived in London 1732 or early 1733. (see Hammelmann) to aid Claude du Bosc in engraving of an English version of Bernard Picart's “Ceremonie et Coutume” He lodged at Golden Cup in King St. Covent Garden and taught drawing at the sign of the Golden Pestle and Mortar Covent Garden. He was an important member of The old Slaughters Coffee House set and the St Martins Lane Academy.

We next hear of Roubiliac in London in 1730, when he appears on a list of members of the Masonic Lodge of the White Bear, in King St. Golden Square. The Swiss engineer Charles Labelye (1705 - 81) famous for the building of Westminster Bridge (started 1736 finished 1750) also appears on the list.

One should be slightly suspicious of this list which is almost certainly a later copy.

A bust of Senesino (now missing - see below) was completed by Roubiliac by 1736. I understand that there is a pocketbook belonging to Elizabetta Avanzatti (an Italian historian and distant relative of Senesino and who resides in the Palazzo Bernard Avanzatti in Sienna) which was kept by Senesino and which mentions his sitting for Roubiliac in 1735.


For Senesino see The Unpublished Senesino by Elisabetta Avanzatti in Catalogue Handel and the Castrati -2006. Handel House, London

It seems that Senesino owned a marble bust of himself and requested in his will that it be used as his funeral monument at Sienna.  It has since disappeared, presumed destroyed in the Napoleonic Wars.

There is a short poem by Lockman on Roubiliac and his bust of Senesino in the London Daily Post and General Advertiser of 4 June 1736. I believe this is probably the first mention of Roubiliac in the English press.

Mentioned in a poem 'A Miscellany of Poems' 1740 by Lockman, 4 poems to Roubiliac including To my Friend Mr Roubiliac the sculptor after viewing his Rape of Lucretia and other Models and another upon a bust carv'd by him of Senesino Bienecke Library, Yale University, Osbourne L268.4 16 – 18 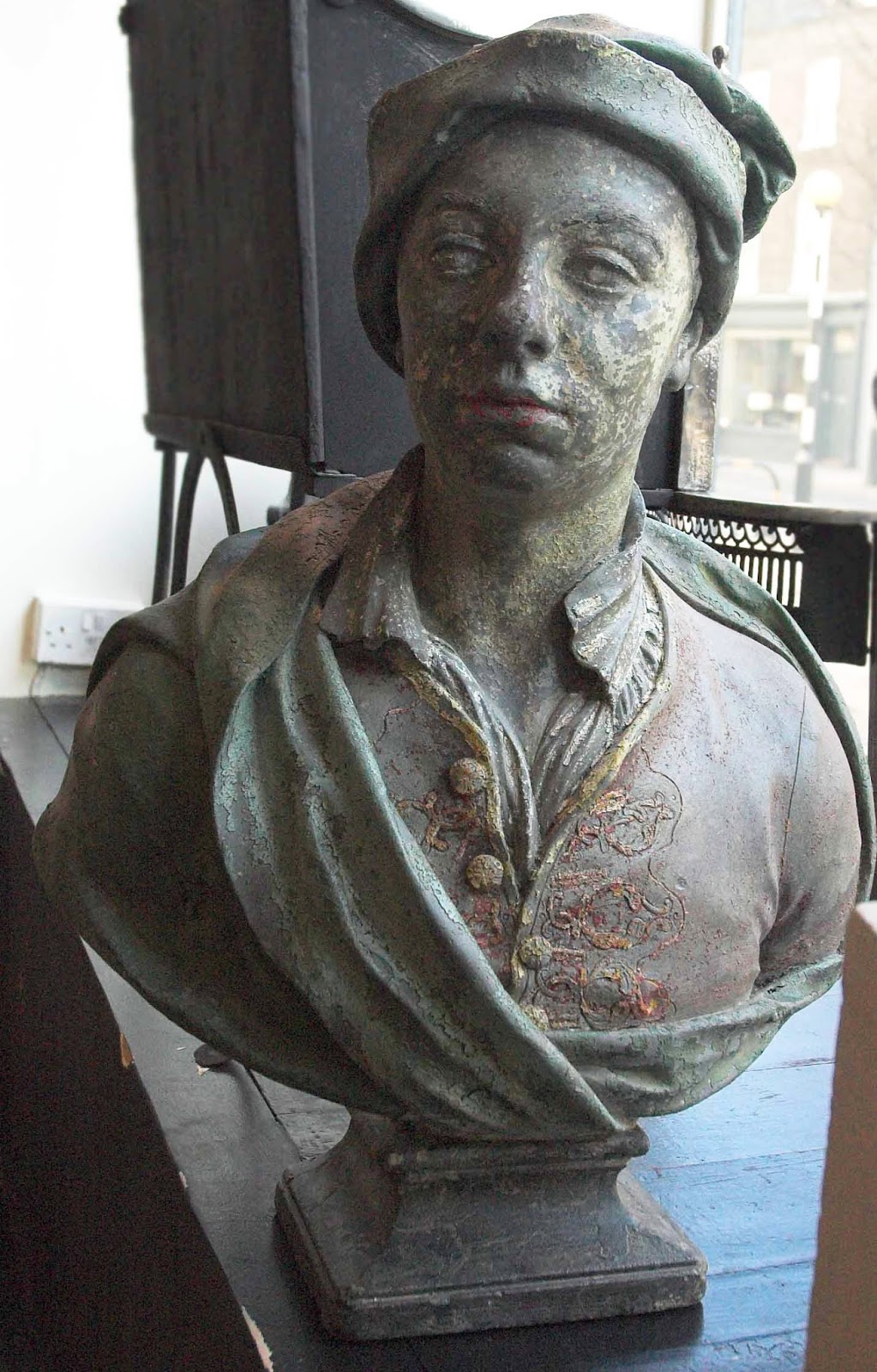 A very rare Life Size Lead Bust on the London Art Market in 2010.
The very unusual physiognomy of this bust had bothered me for some time; there is an almost girlishness, fresh facedness about him.

It is my belief that this is perhaps a version of the bust of the castrato opera singer Francesco Bernardi (Senesino) (1686 -1758) remembered today for his long association with Handel and was created by Louis Francois Roubiliac.

The eyebrows, the tilt of the nose, the voluptuous lips, and the form of the chin all correspond to the known portraits.

Certainly the lack of testosterone which led to a female type distribution of fat on the body and lack of beard, aided the youthful castrati in taking on female rolls.

This bust also shows a distinct lack of Adams apple, the growth of which is also inhibited by the lack of testosterone in the castrato.

Posted by David Bridgwater at 11:50