A lead Bust attributed to Roubiliac. 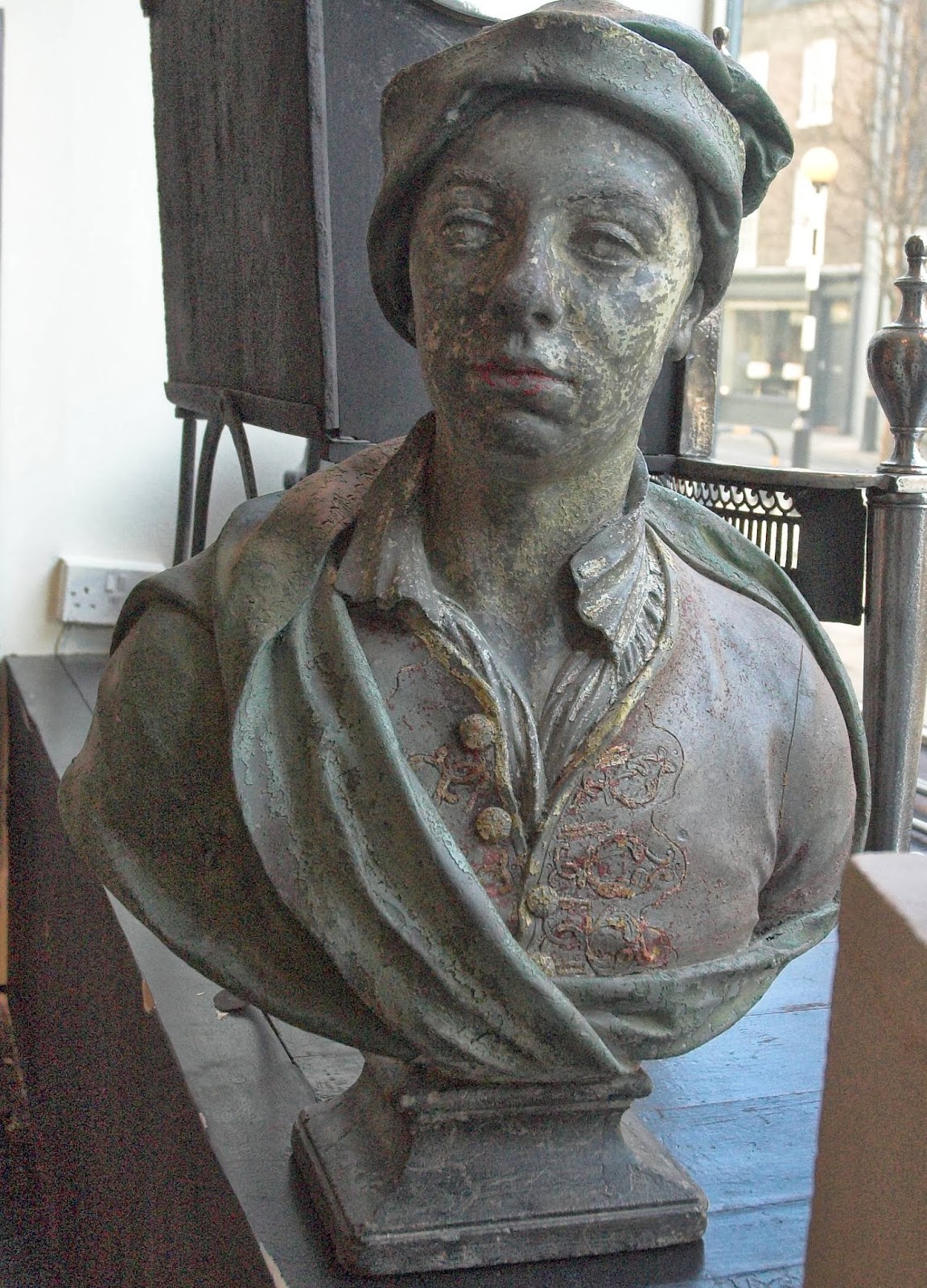 This bust was on the London Art Market in 2010. 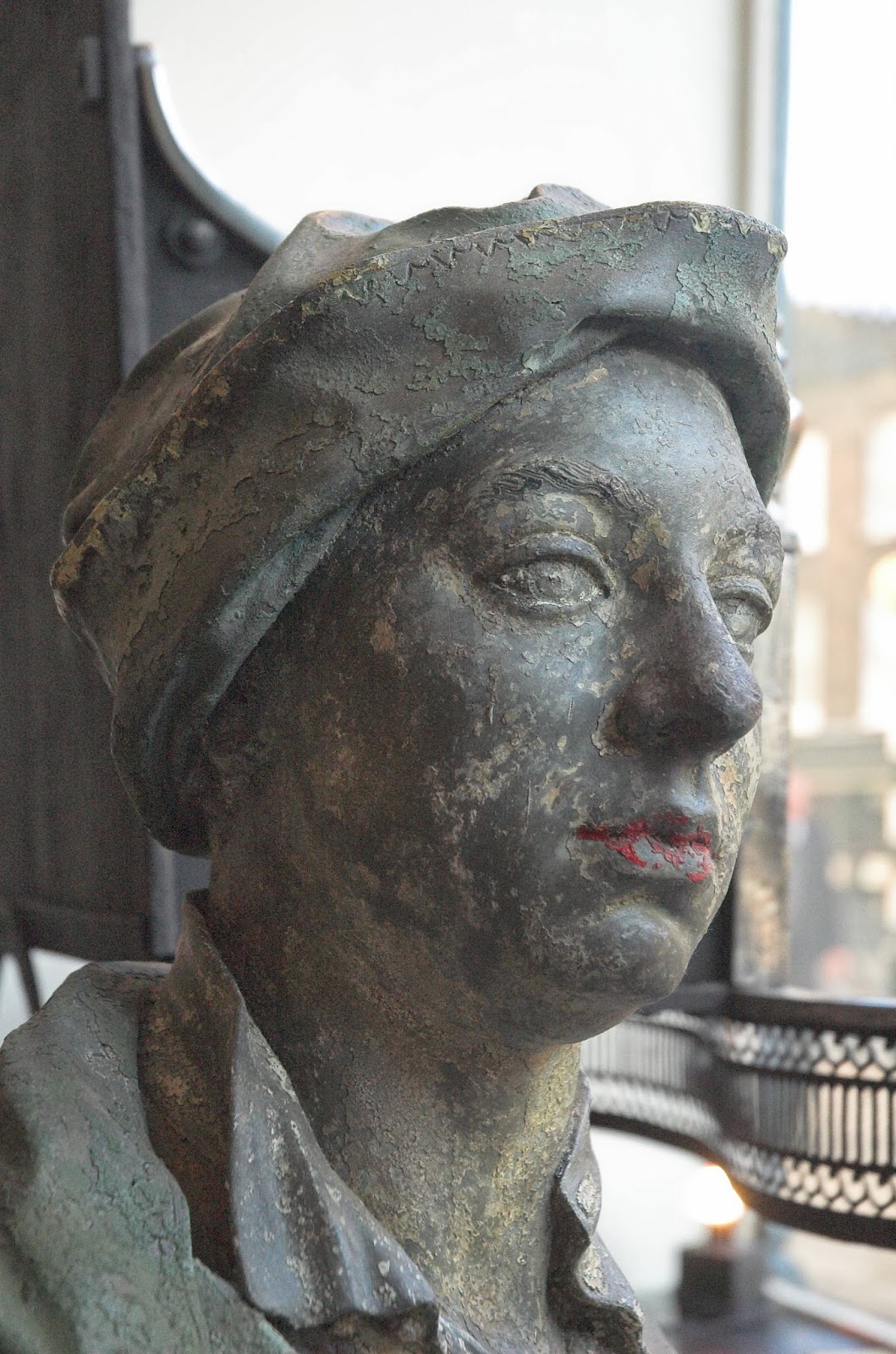 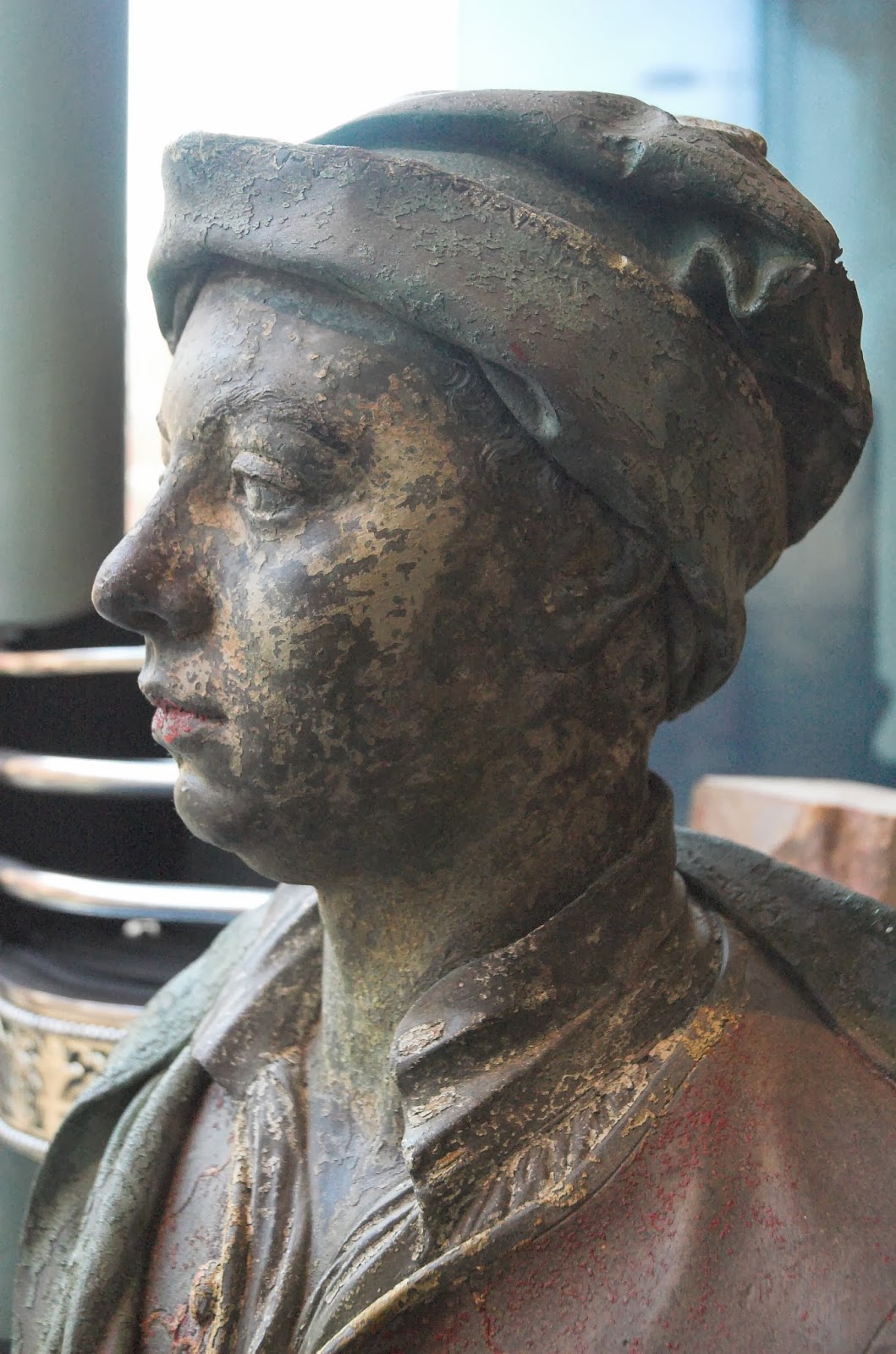 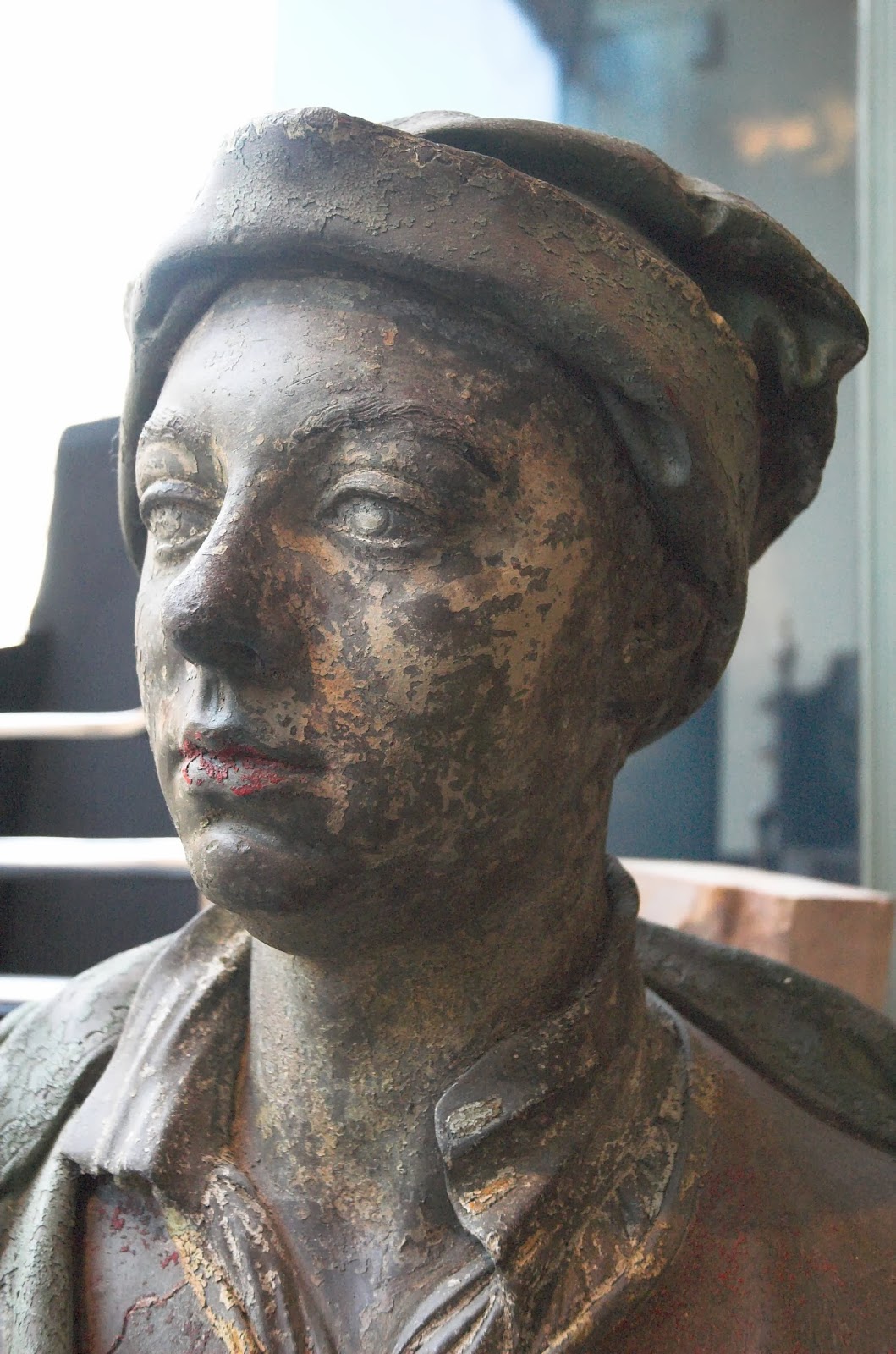 There are comparable lead busts supposedly of Dr Salmon and his wife and another anonymous bust at the Victoria and Albert Museum. 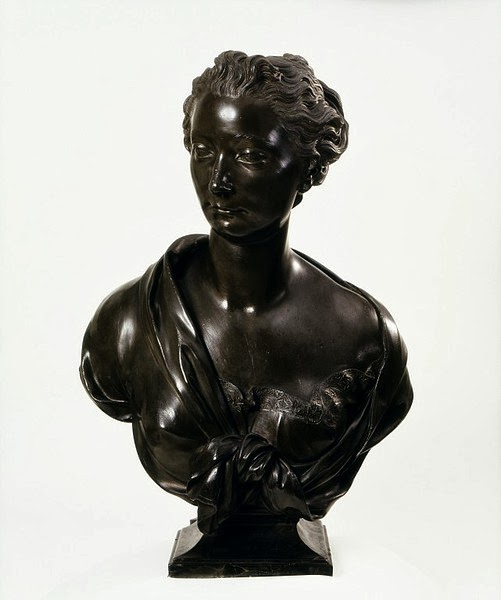 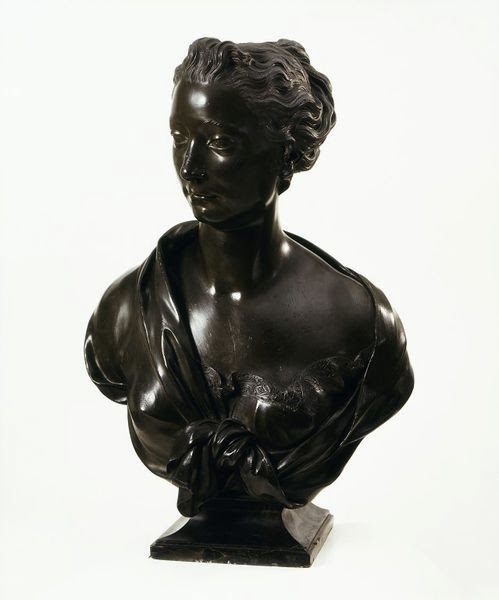 Generally this type of bust is attributed to John Cheere (1709 -1787) who had the very successful yard at Hyde Park Corner from about 1738 and is now known for his works chiefly in lead and plaster. 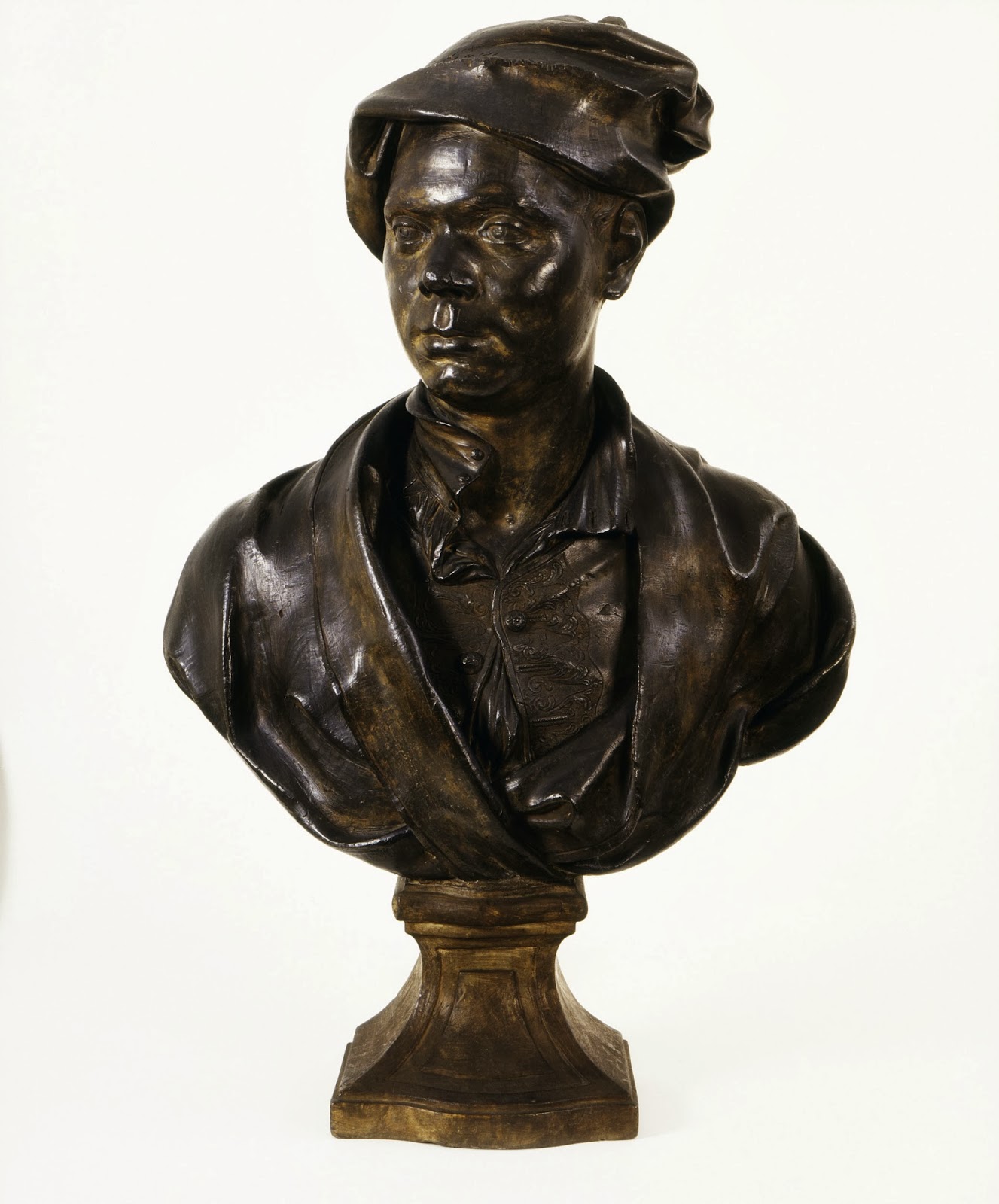 The Anonymous Lead Bust in the V&A.

His brother Henry was believed to be the more talented sculptor of the two. 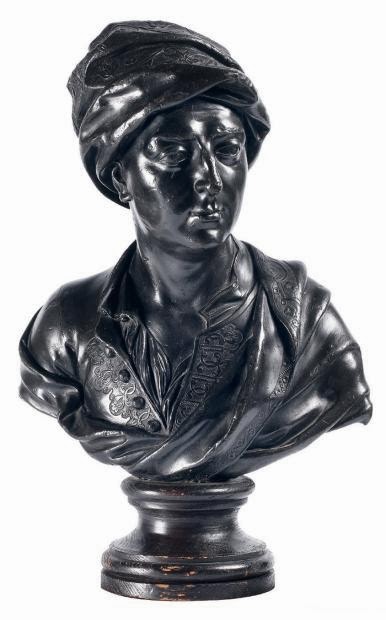 An anonymous lead bust sold by Fraysse Paris Lot 193, Summer 2012, perhaps by the same author of the V&A busts.

It is my strong conviction that the bust illustrated above is a version of the bust of the castrato opera singer Francesco Bernardi (Senesino) (1686 -1758) remembered today for his long association with Handel and was created by Louis Francois Roubiliac.
The very unusual physiognomy of this bust has bothered me for some time; there is an almost girlishness, fresh facedness about him.The eyebrows, the tilt of the nose, the voluptuous lips, and the form of the chin all correspond to the known portraits.

Certainly the lack of testosterone which led to a female type distribution of fat on the body and lack of beard, aided the youthful castrati in taking on female rolls.

This bust also shows a distinct lack of Adams apple, the growth of which is also inhibited by the lack of testosterone in the castrato.

See. The Eroticism of Emasculation: Confronting the Baroque Body of the Castrato Roger Freitas ‌ Journal of Musicology, Spring 2003, Vol. 20, No. 2, Pages 196–249.
http://www.sjsu.edu/upload/course/course_4495/04.2_freitas.pdf
“The Castrato as Boy
My central argument in this study is that, on the Italian baroque
stage, the castrato represented a theatrical imitation of this erotically
charged boy. Just as stage sets might exaggerate an architectural vista or
costumes aggrandize Roman armour, so too did the castrato magnify the
familiar youth. He inhabited the same intermediate sexual zone as the
boy, sharing the erotic mixture of masculine and feminine qualities.
Support for this assertion comes from many quarters. Physically, of
course, a castrato simply retained many of his boyish features well into
214 the years of adulthood: Although he might grow in height (sometimes
to unusual proportions), he retained his high voice, lack of beard, and
soft body. The few known portraits of castrati also suggest that they retained
their boyishly round faces and full cheeks, probably a consequence
of the eunuchoid fat patterning discussed below .That this boyish appearance tended to affect the contemporary conception of these individuals is suggested by the frequent use,
well into adulthood, of diminutive nicknames for them, such as Nicolino,
Senesino, Giuseppino, Marianino, and Pauluccio”
See also -
Laura E.DeMarco, "The Fact of the Castrato and the Myth of the Countertenor," Muszcal Quarter4 86 (2002): 1 74-85.
John Rosselli, "Castrato," in Grove Dictionary of Music and Musicians, 2nd ed.
(New York: Grove's Dictionaries, 2001) (Emphasis mine).
See also John Rosselli's central article, "The Castrati as a Professional Group and a Social Phenomenon, i 55-1850,''
Acta Musicologica 60 (1988): 143-79,
Beth Kowaleski-Wallace, "Shunning the Bearded Kiss: Castrati and the Definition of Female Sexuality," Prose Studies 15( 1992): 154.
Angus Heriot’s The Castrati in Opera (1975);
Patrick Barbier The World of the Castrati: The History of an Extraordinary Operatic Phenomenon (Sep 1 1998)
Richard Somerset-Ward. Angels and Monsters: Male and Female Sopranos in the Story of Opera, 2004.
It is my belief that the sculptor has tilted the head forward in order to minimise the effect of his upturned pug like nose obvious in his portraits, Roubiliac was not known for flattering his sitters by romanticising their appearance.
A bust of Senesino was completed by Roubiliac by 1736. I understand that there is a pocketbook belonging to Elizabetta Avanzatti (an Italian historian and distant relative of Senesino and who resides in the Palazzo Bernard Avanzatti in Sienna) which was kept by Senesino and which mentions his sitting for Roubiliac in 1735.
For Senesino see The Unpublished Senesino by Elisabetta Avanzatti in Catalogue Handel and the Castrati -2006. Handel House, LondonIt seems that Senesino owned a marble bust of himself and requested in his will that it be used as his funeral monument at Sienna.  It has since disappeared, presumed destroyed in the Napoleonic Wars.
There is a short poem by Lockman on Roubiliac and his bust of Senesino in the London Daily Post and General Advertiser of 4 June 1736. I believe this is probably the first mention of Roubiliac in the English press.

To Mr ROUBILIAC on seeing a bust made by him of SENESINO by Mr LOCKMAN
When Senesino breathes in Vocal strains
We think Apollo’s left the aetherial plains
When we the Warbler view, by thee exprest
He seems as by the hand of nature drest
Thy art so happily eludes the eye
His voice such sweetness boasts, and swells so high,
That which best imitates, twill doubtful be
Thou Senesino or Apollo be
Senesino left England in 1736 never to return.
Farinelli (Carlo Broschi born Jan. 24, 1705, Naples, died July 15, 1782, Bologna ), the castrato opera singer left England 11 June 1737.
There is a plaster bust of Farinelli at Real Academia de Bellas Artes de San Fernando, Madrid, Spain. This is undated but must have been made after his departure from England because it shows him wearing the Cross of the Order of Calatrava awarded to him in 1750. 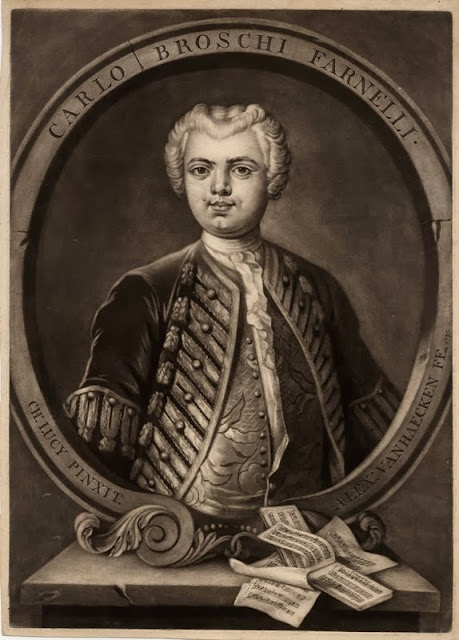 Farinelli.
Vertue mentions seeing a bust of him in Roubiliacs studio “a model in clay the portrait of Faranelli the famous singer”. 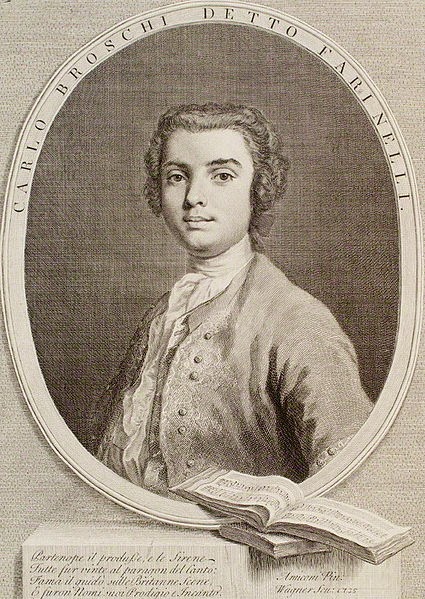 John Lockman mentions in one of four poems of 1740 addressed to Roubiliac in 1740 in A Miscellany of Poems (unpublished manuscript Bienecke Library, Yale University. To my friend Mr Roubiliac, the sculptor, after viewing his Rape of Lucretia & other models and another upon a bust carved by him of Senesino. 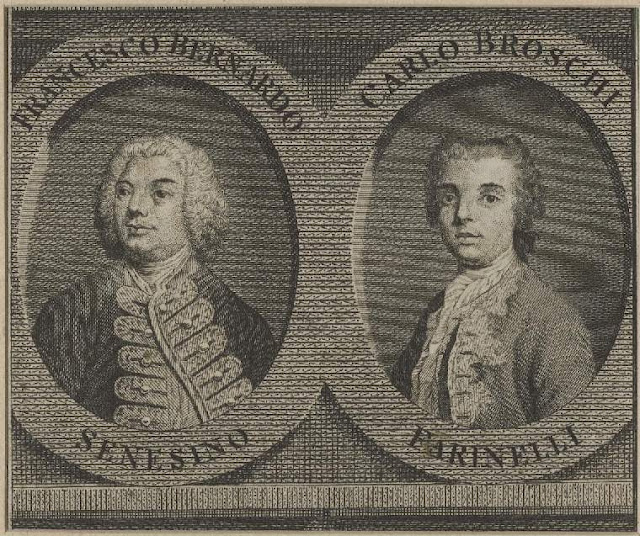 The two portraits of Senesino most relevant to our bust are - 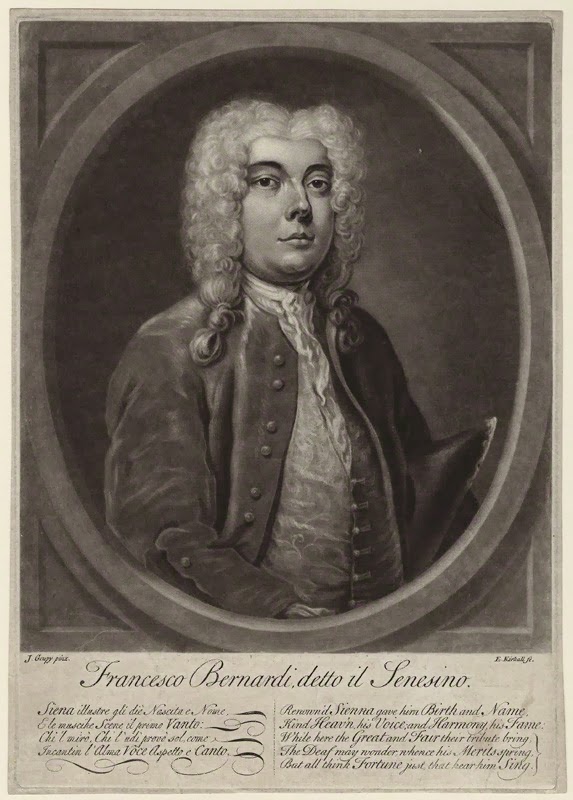 An engraved portrait of Senesino by Kirkall after Joseph Goupy of 1728. 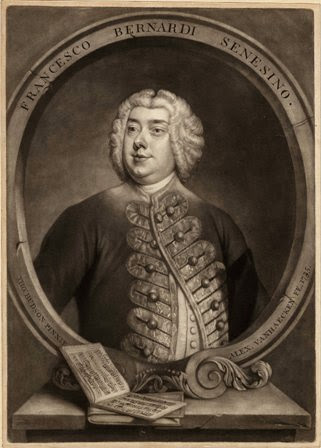 A mezzotint by Joseph van Aken after Thomas Hudson of 1735.
The painting has disappeared last mentioned in Hudson’s sale at Christies of 26 Feb 1785, the pair to it of Farinelli, was engraved at the same time.

It is interesting to note that whilst Van Aken engraved both Senesino and Farinelli – Roubiliac had sculpted their portraits at the same time. Van Aken became known as a drapery painter for Hudson, Ramsay etc. 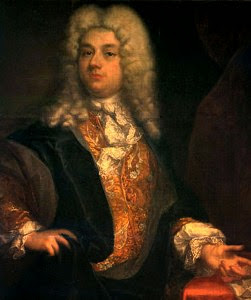 There is a depiction in Hogarth’s painting and print Marriage a la Mode of an Opera singer which probably represents Senesino or an archetypal Italian Castrato Opera singer.
Brief Biography of Senesino before coming to England
Senesino (Francesco Bernardi) (b. 31 October 1686, Siena; fl. 1707-40; d. Siena, 27 November
1758). Castrato (range g–g΄΄). Bernardi, nicknamed ‘Senesino’ was the son of a barber who destined both him and his elder brother Giovan Carlo to the career of castrato singers. After an early musical training as boy choristers at Siena Cathedral, Giovan Carlo was castrated in 1696 and Francesco in 1699. However, only Francesco achieved considerable acclaim and wealth. His first documented operatic appearances were at Venice’s Teatro Sant’ Angelo and in nearby Vicenza during the 1707-9 seasons (in operas by Ruggieri, Albinoni and others). Over the next few years he performed at Bologna, Genoa and Rome. From October 1715 until January 1717, Senesino featured in six operas at Naples, including several by Alessandro Scarlatti. At this point in time, the Bolognese impresario Francesco Zambeccari affected to find him incompetent in the recitatives and a poor actor. In September 1717, Senesino was engaged for the court opera at Dresden on a lucrative salary and performed in three operas by Antonio Lotti, with whom he had worked previously in Venice. In May 1719 Handel received specific instructions from the directors of the Royal Academy of Music to ‘engage Senezino as soon as possible’ (Deutsch, 90), and visited Dresden that summer, where he probably heard the singer perform in Lotti’s Teofane. 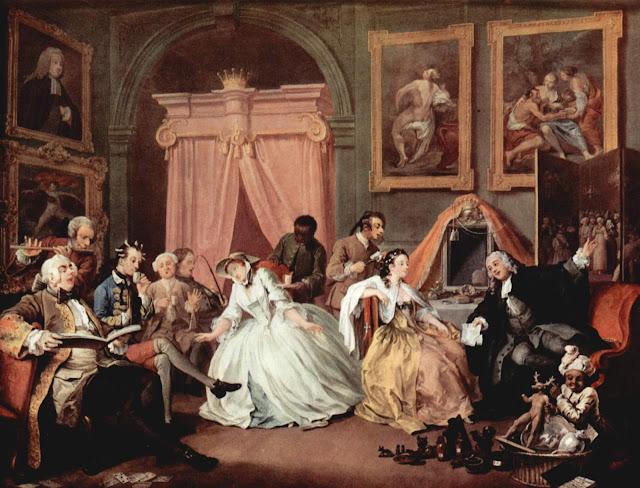 The Figure seated on the left is believed to represent Senesino- note the turned up nose - The Toilette from Marriage a la Mode by William Hogarth.

Posted by David Bridgwater at 12:33