A Lead Bust of John Locke in the Bodleian Library

A Lead Bust of John Locke
probably by John Cheere
Mid 18th Century.
in the Bodleian Library.
On a painted turned wooden socle.

This post is part of a much wider study into the portrait sculpture at Oxford University, with particular reference here to the lead Cheere type bust of John Locke at The Bodleian Library and the marble bust after Roubiliac by Edward Hodges Baily at Magdalen College, Oxford.


I would also like to thank Dr Nicolas Bell of the Wren Library, Sir David Clary, Lady Heather Clary and Rachel Mehtar at Magdalen College Oxford. and Stephen Hebron of the Weston Library, Oxford for allowing me to visit and to photograph the busts under their care.

Height of the bust without socle approx. 23.5"

There are remains of white paint on the underside of the front of the costume which suggests that it has been stripped and was originally painted white to represent marble.

Bequeathed by Ethel Locke King to the Bodleian Library in 1956.

At first glance this is a very impressive and imposing bust but after close inspection it becomes slightly less so.

The workmanship lacks the subtleties found in other finer lead busts of the period - particularly the three lead busts in the Victoria and Albert Museum. On the bust of the unknown man (see below) the detailing of the buttons and buttonholes and the punch work and chiselling on the embroidery of the waistcoat are much superior.

"Though they may not express the finer lines of an human body yet they seem perfectly well calculated on account of their duration to embellish landskips, were they some degrees inferior to what we generally behold. A statue in a room challenges examination, and is to be examined critically as a statue. A statue in a garden is to be considered as one part of a scene or landskip: the minuter touches are no more essential to it than a good landskip painter would esteem them were he to represent a statue in his picture"

This aptly describes the lead bust of Locke which was probably made for a niche on the exterior of a building.


The original, from which this bust derives is probably now lost, but it must have been a very fine object. This lead bust is very close to the marble busts perhaps by or after Roubiliac mentioned in my previous post. What differentiates it from the marble versions is the work on the embroidery of the waist coat and edge of the mantle.

The original of these busts was perhaps by Louis Francois Roubiliac.

See my recent post on the Magdalen College Marble of Locke after Roubiliac by Edward Hodges Baily - https://bathartandarchitecture.blogspot.co.uk/2018/01/busts-of-john-locke-and-francis-bacon.html

It should be stated that this sort of bust in lead is very rare survival.
I have also posted previously on 18th century lead bust see for instance -

There is a bronze version of this bust currently on the London Art Market - this is of a markedly lesser quality than the mid 18th Century bronze busts that we know of - such as the bronze busts of Lord Chesterfield (see my next post). 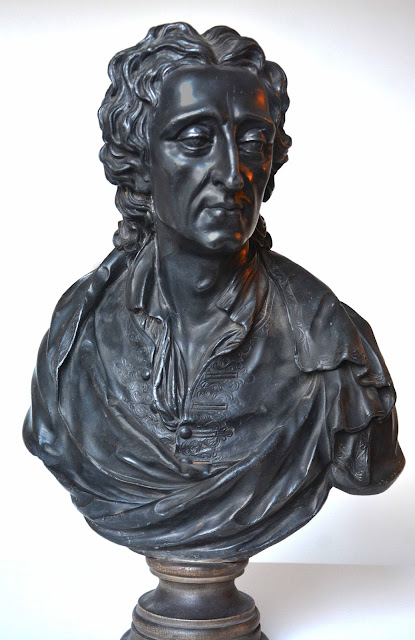 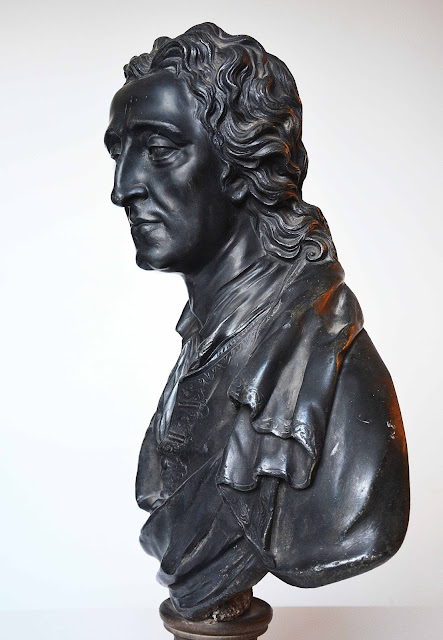 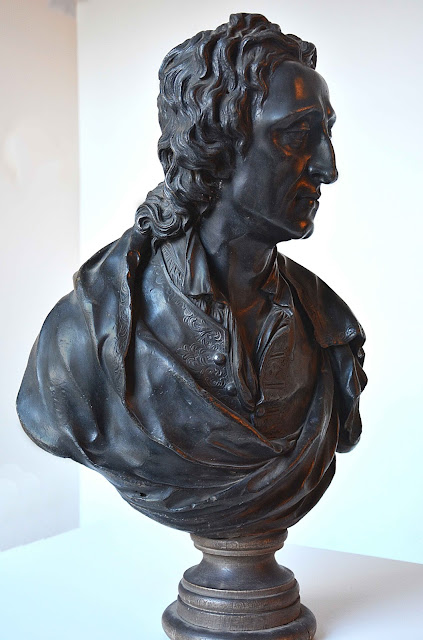 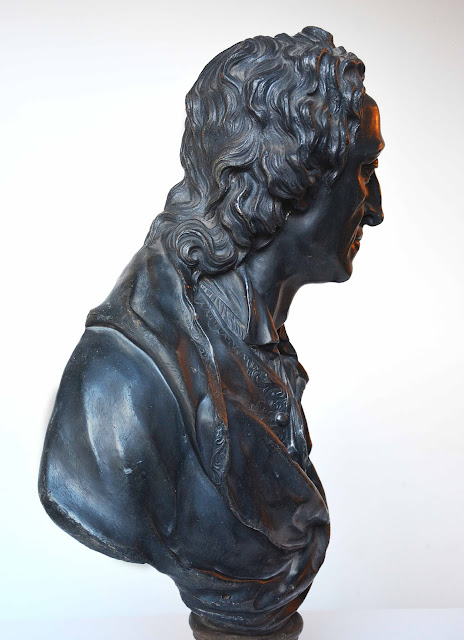 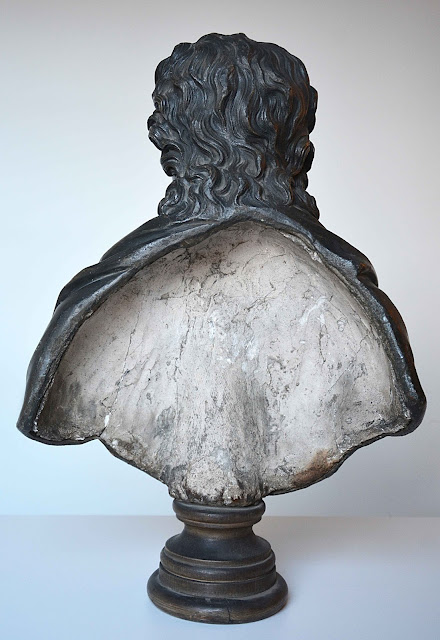 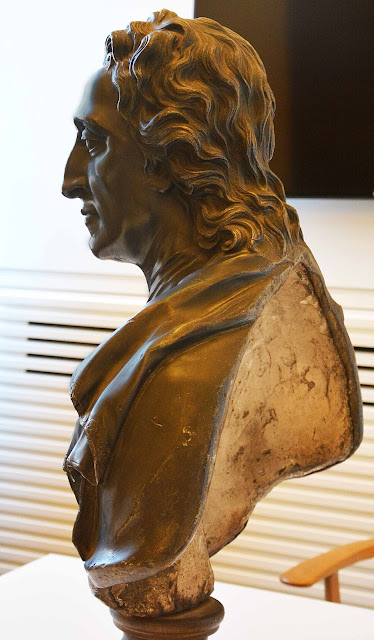 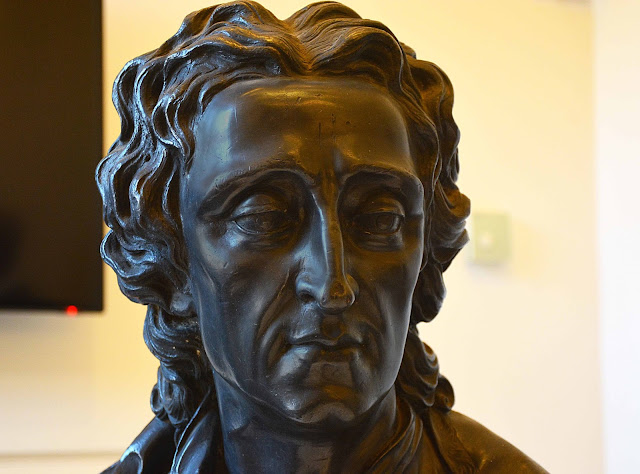 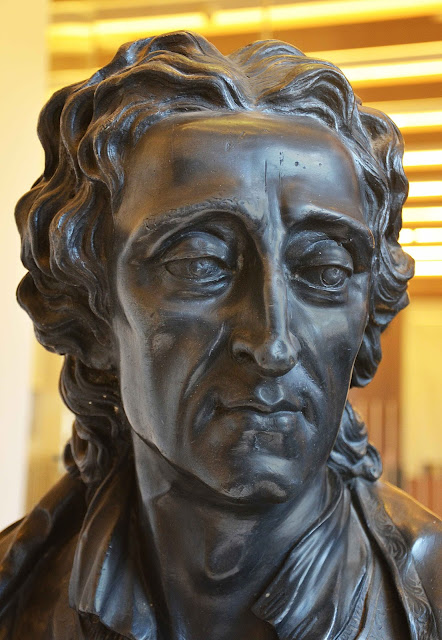 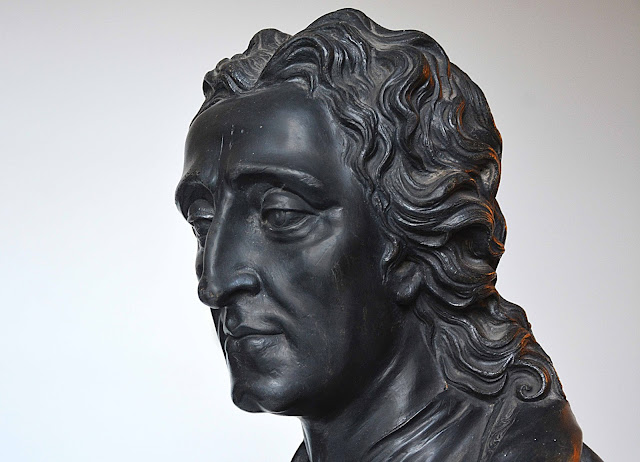 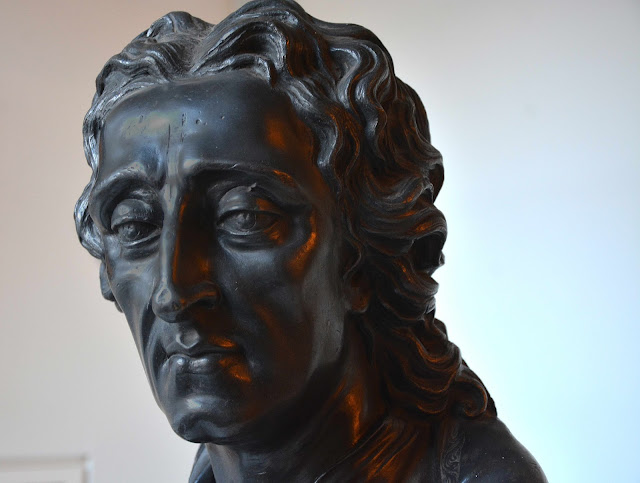 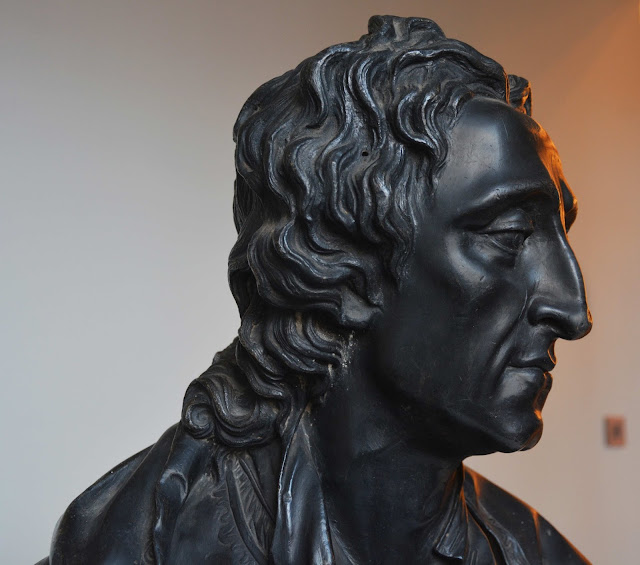 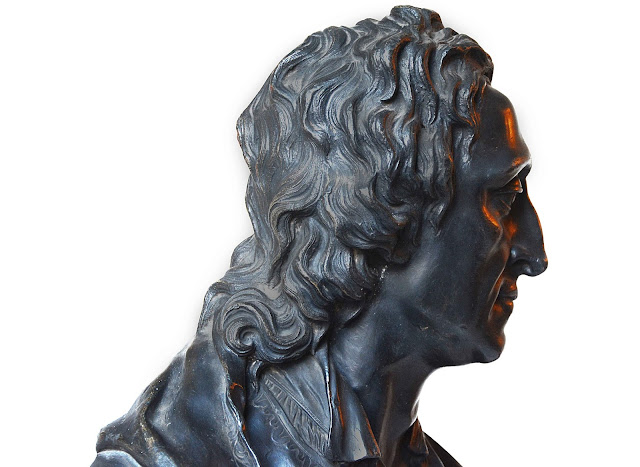 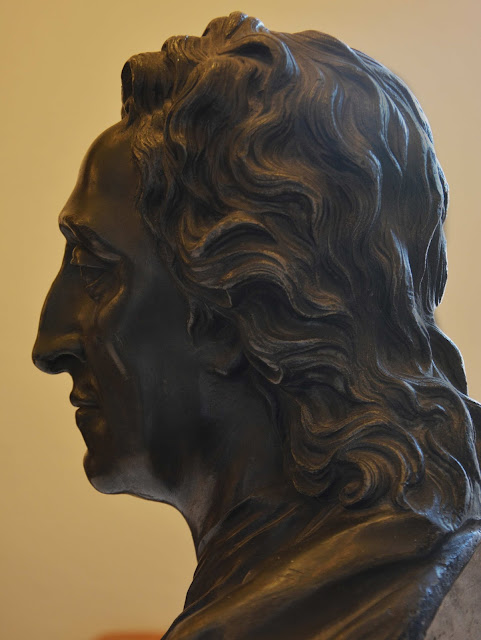 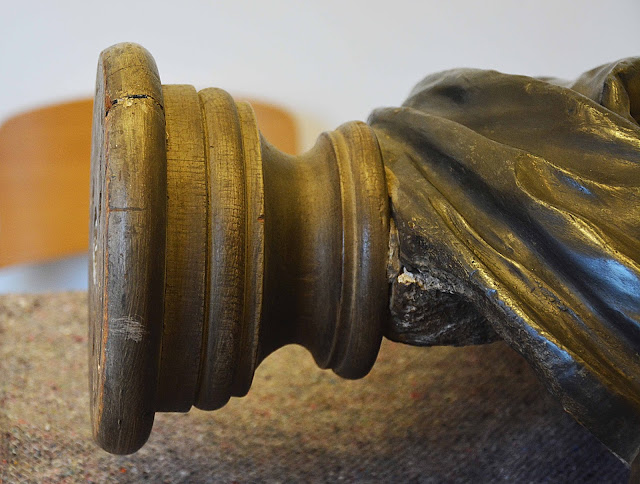 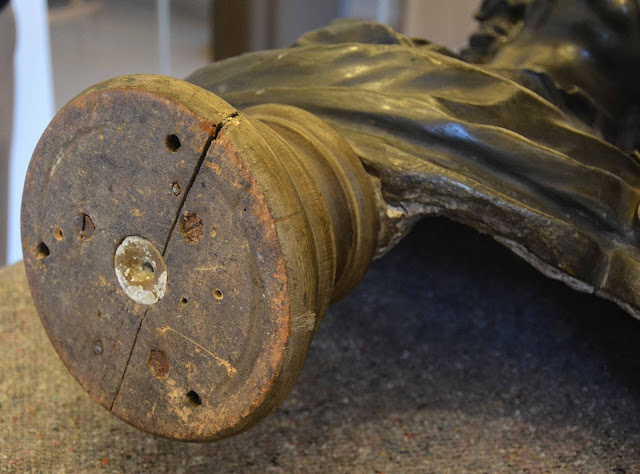 Details of the turned wooden socle.
This appears to be original  the grain would suggest that it is oak with a very old painted finish.

The bottom section of the socle appears to be a perhaps, slightly later softwood addition, screwed to the original with three screws to make the bust more stable. 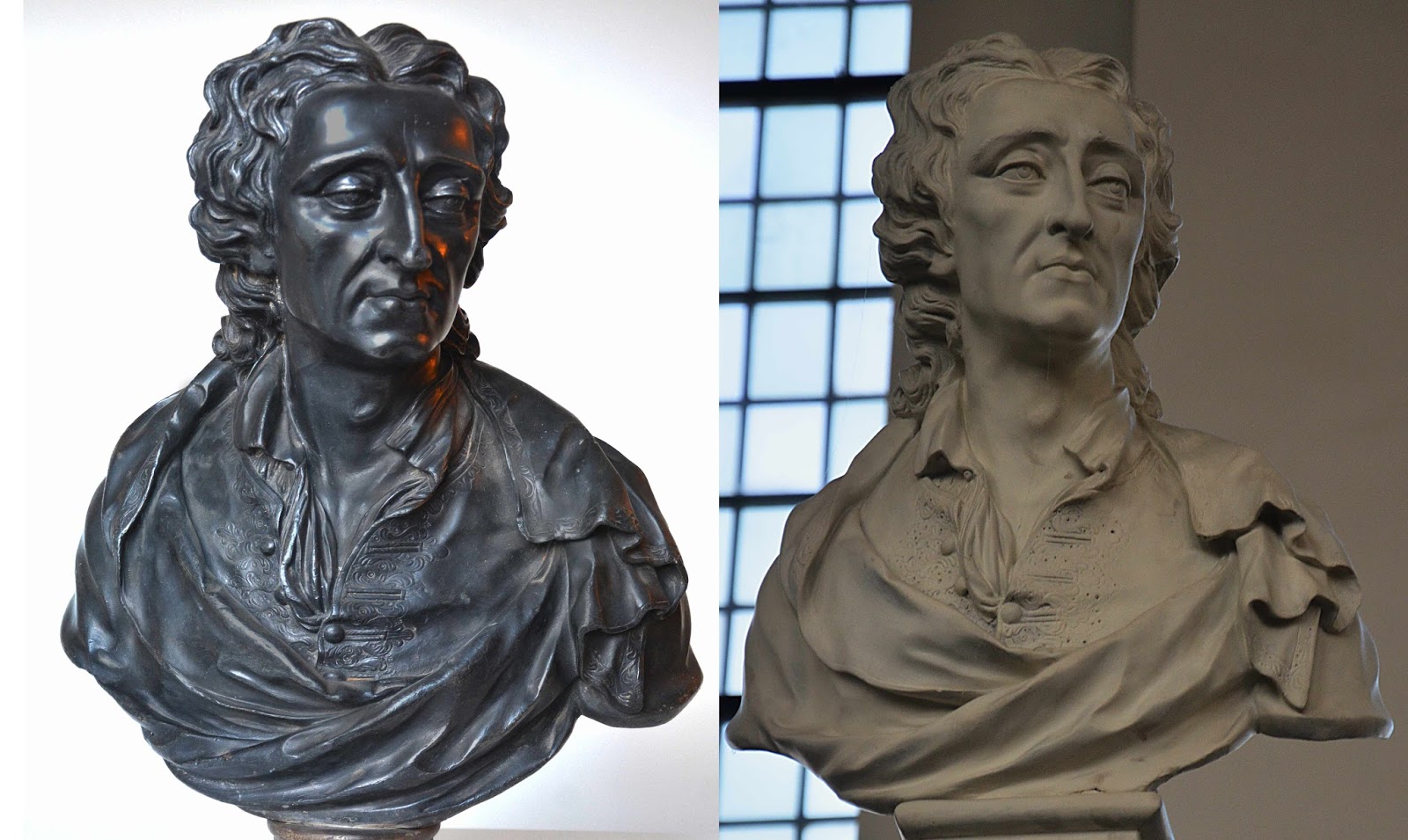 The Bodleian Lead and the Wren Library Plaster - Side by Side for Comparison.

There are minor variations in these busts  - there is extra embroidery on the waistcoat of the plaster bust.

This begs the question of which came first, the lead was not cast from this version of the plaster but is so close that they must be related.

In the plaster, even though it has been over painted several times, the quality of the finish of the detail is obviously much superior to that of the lead.

Again comparison of the embroidery of the waistcoat is very instructive.

Both photographs here taken by the author.

With grateful thanks to Stephan Hebron,  the Bodleian Library Curator of Special Projects and Dr Nicolas Bell College Librarian of the Wren Library, Trinity College Cambridge and to Dana Josephson for all their kindness assistance with this project. 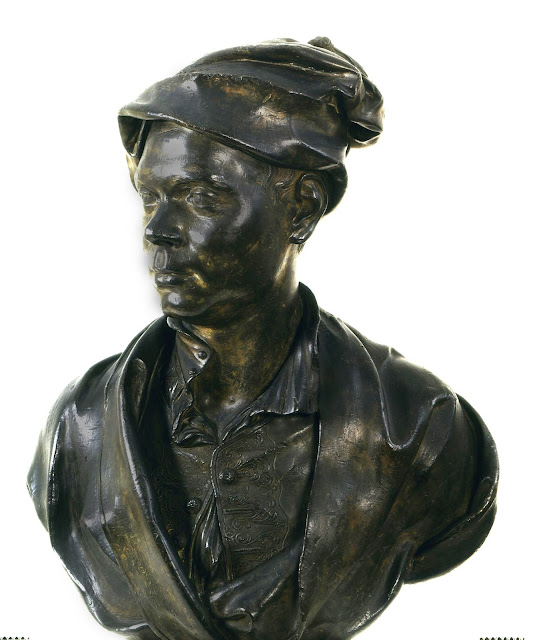 A Lead bust of an anonymous young man.
75.5cms including the socle.
Lent to the museum by Lt Col. GB Croft Lyons in 1913 and bequeathed to the museum in 1926.
Victoria and Albert Museum.

This bust is of a superior quality to the Bodleian bust of Locke. 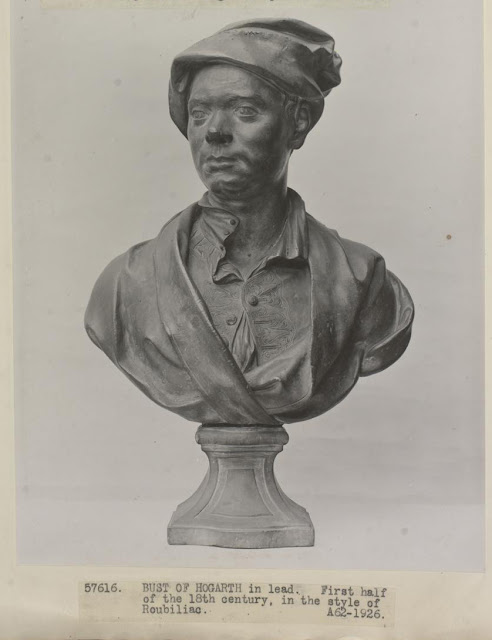 The same bust photographed in the mid 20th century and described as Hogarth. 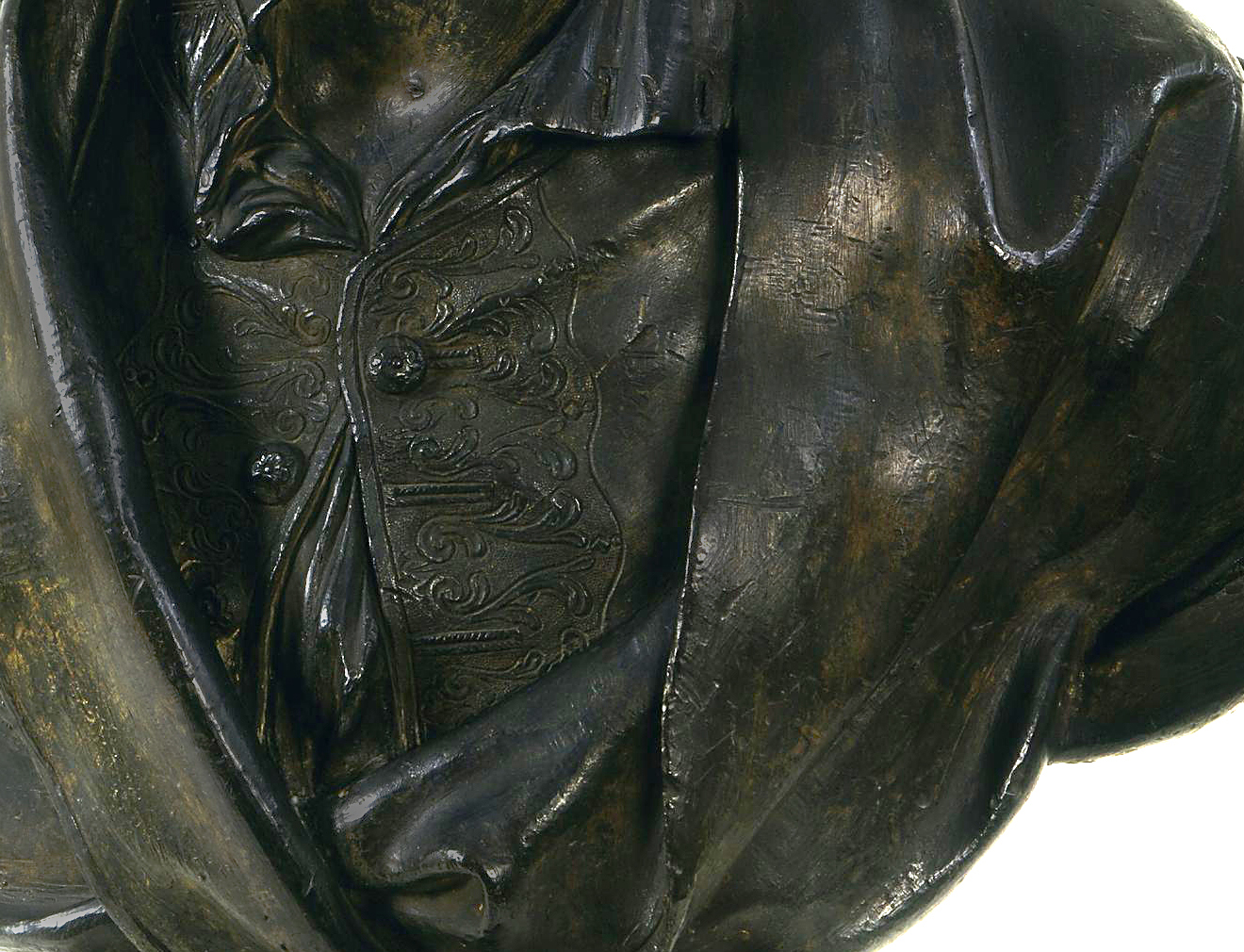 It is important point to note the quality of the finish of this bust - particularly the buttons and button holes, the shirt at the collar and the embroidery on the waistcoat.

I would suggest that the detail of the V and A bust has been punched and chiselled by hand, whereas the Locke has come directly from the mould and has only perhaps been hand finished in the detailing of the hair.

Both images from the Victoria and Albert Museum website see -

The Lead bust of Mrs Salmon.
Victoria and Albert Museum. 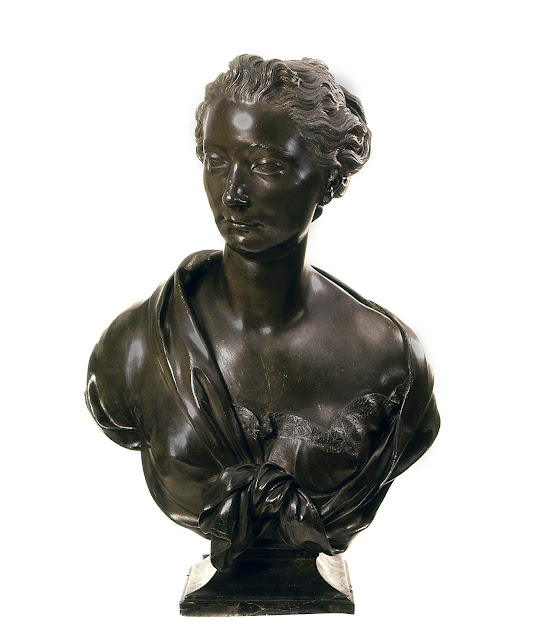 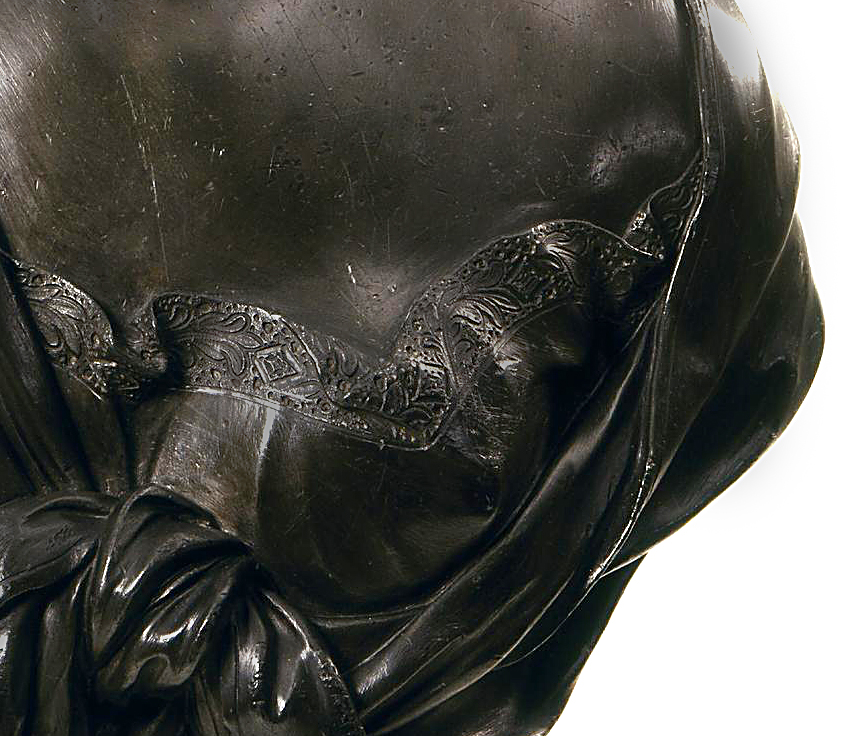 Detail of the Chemise of the lead bust of Mrs Mary Salmon
Showing the hand finishing to the chemise.

This bust is one of a pair - the pendant lead bust of Dr William Henry Salmon of Holcombe, Somerset is also at the V. and A.
The pair purchased in 1921 from a descendant of Dr Salmon - the Rev. JDC Wickham of 8 Lansdown Place East, Bath A visit to a Statuaries Yard.
Thomas Rowlandson (1756 - 1827).
Note the busts ranged on top of the Loggia
Ashmolean Museum, Oxford.
Posted by David Bridgwater at 10:23