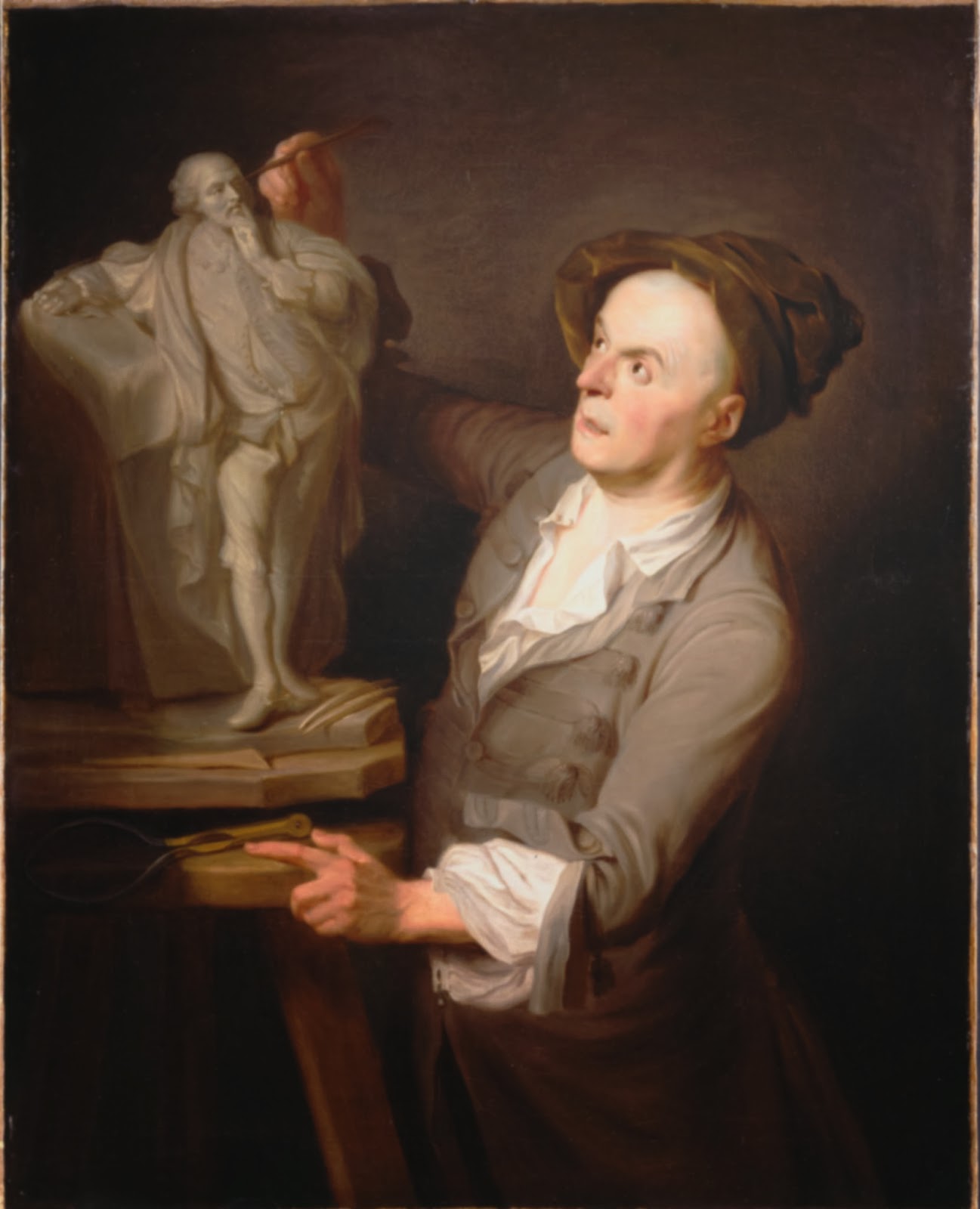 Portrait of Roubiliac by Adrien Carpentiers. circa 1761.
NPG. 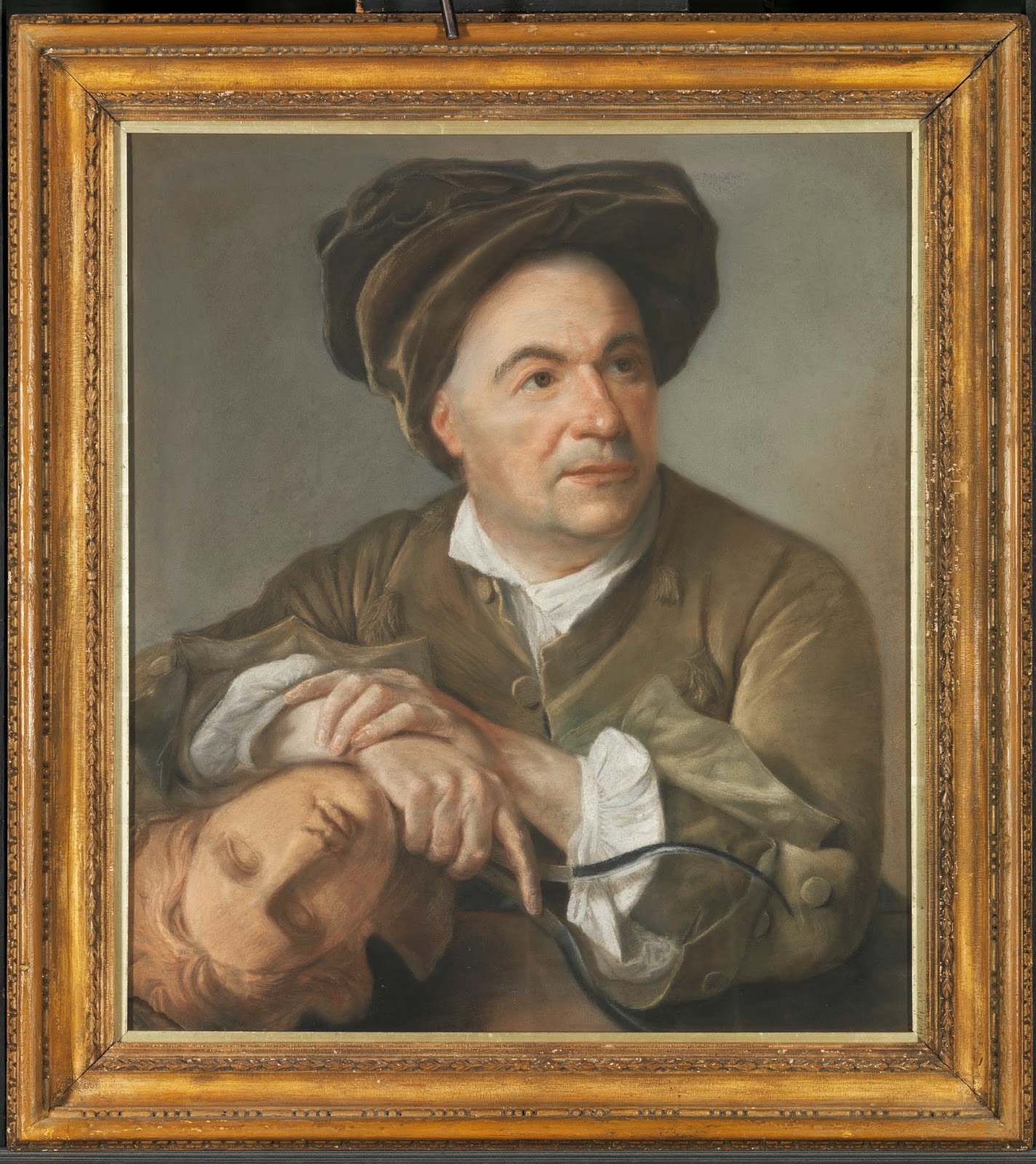 Portrait of Roubiliac
by Andreas Soldi. 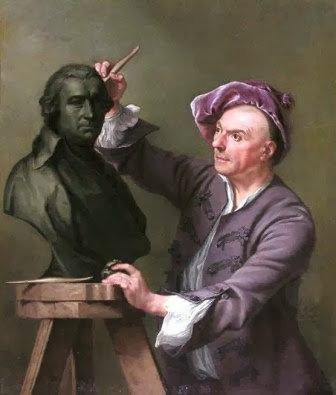 Portrait of Roubiliac by Adrien Carpentiers with the bust of David Garrick. circa 1761. 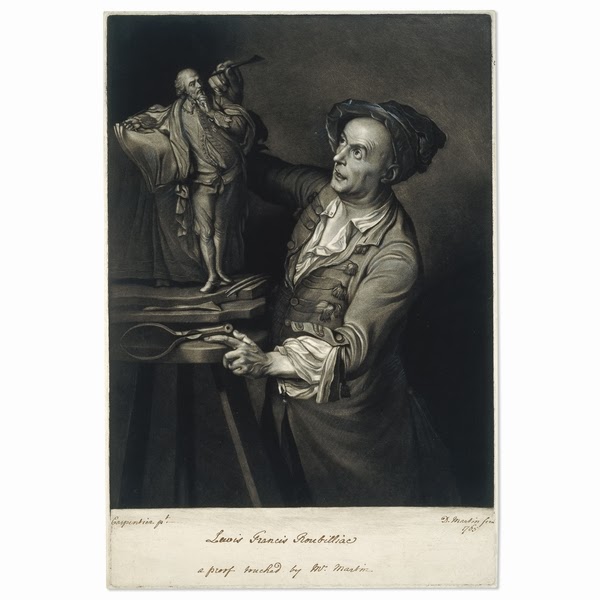 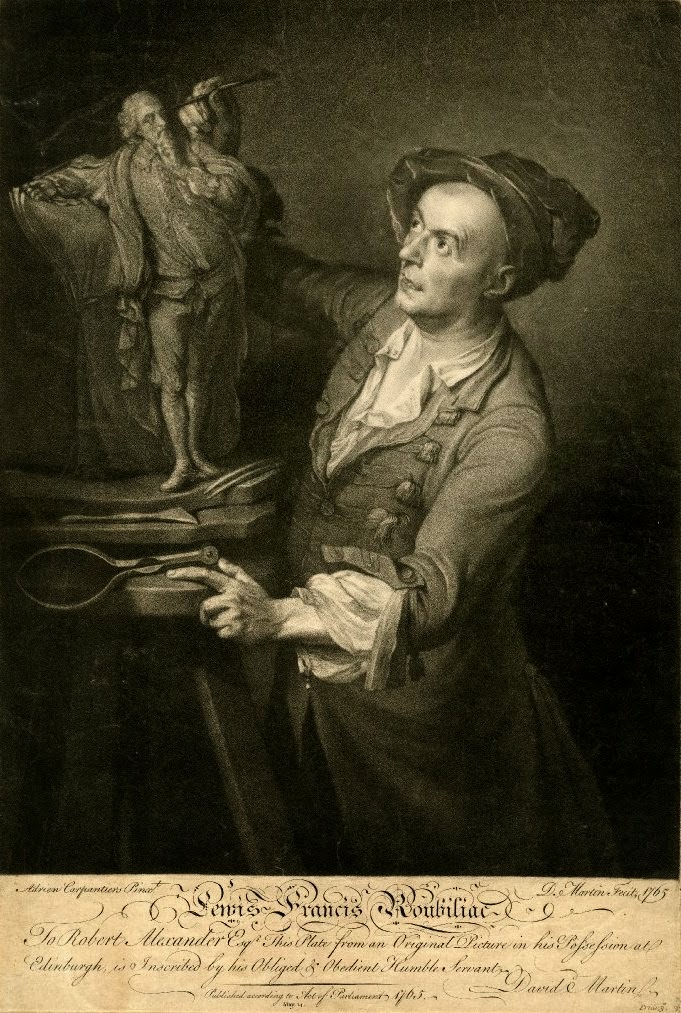 Engraving of the Adrien Carpentier portrait of Roubiliac
by David Martin, 1765.

Showing the terracotta model of the full length figure of Shakespeare made for the pavillion in the garden of the villa of David Garrick - the marble is now in the British Museum. 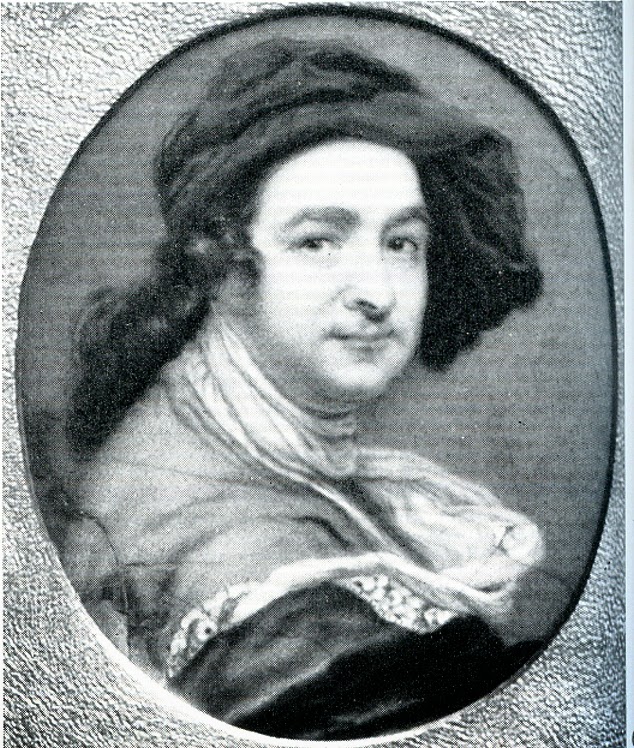 Miniature of Roubiliac by Bernard Lens. 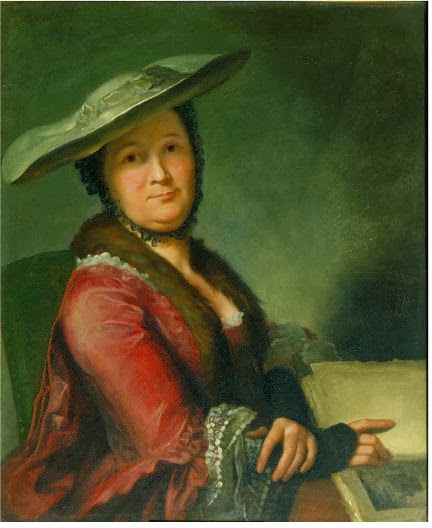 Described as Roubiliac by Wilton.

I find it almost impossible to believe that this is a bust of Roubiliac.

Compare with the above portraits! 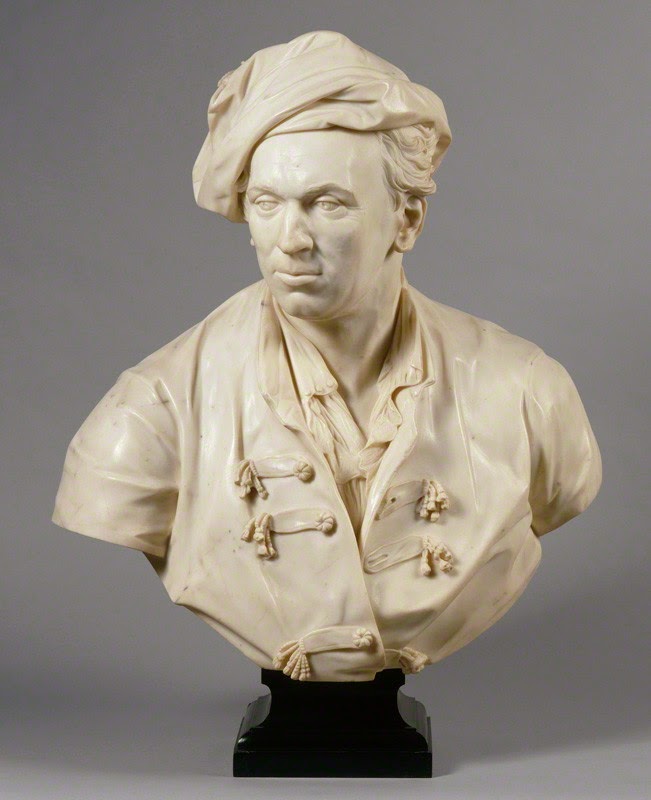 Purchased by the National Portrait Gallery from a Roubiliac family member in 1927.

If it is Roubiliac then it is an idealised portrait.
The nose appears quite different but the ears are very similar. 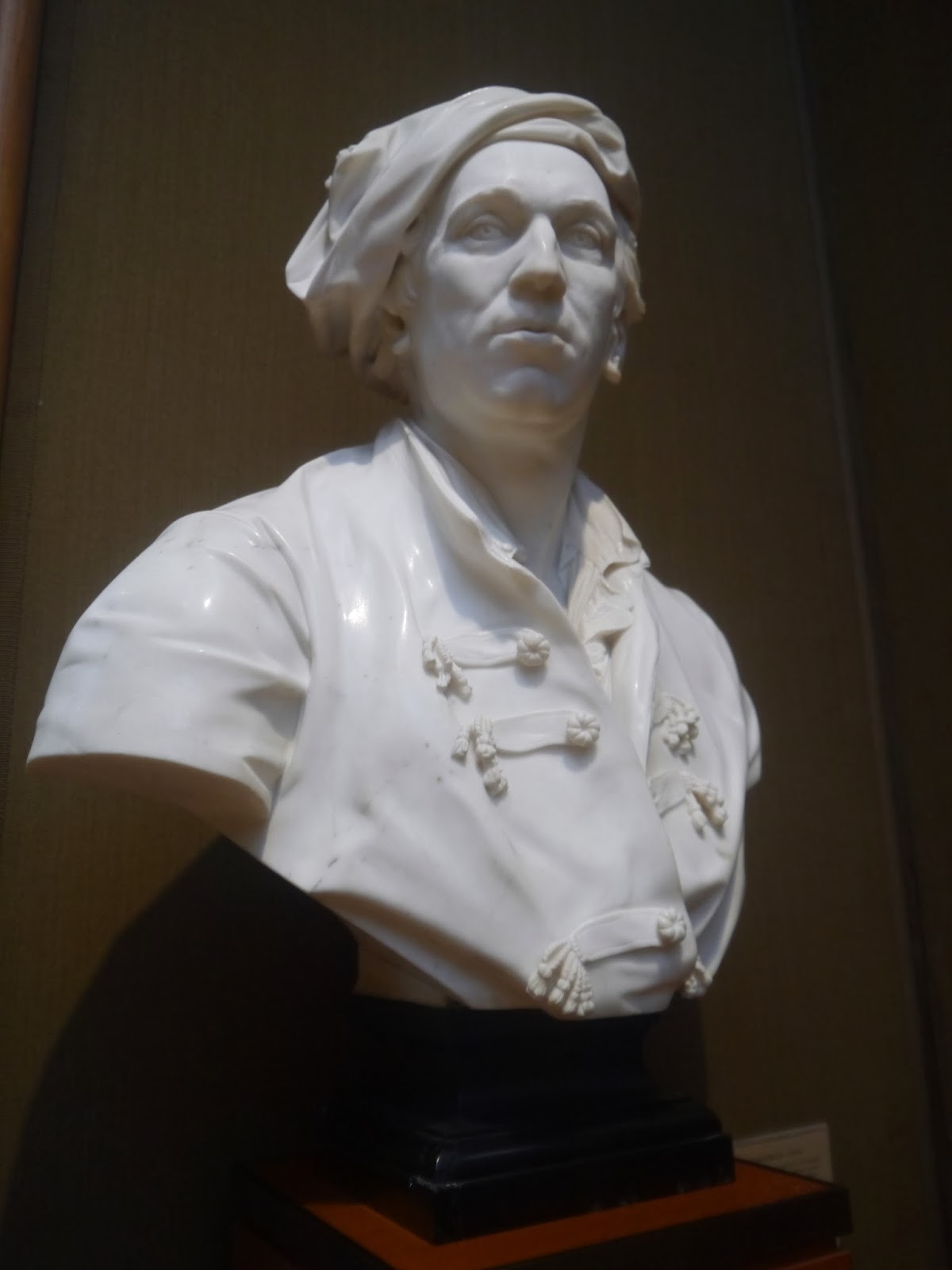 Presented, 1927, by the National Art-Collection Fund;

Once called Voltaire and then Folkes,  identification of NPG 2145, though not entirely conclusive, rests on comparison with portraits of known authenticity and the supposed family likeness noted by Dominic Colnaghi after he had acquired the bust. When the sculptor's granddaughter visited his premises soon after, she was apparently received with the words: 'There is no need to ask what you have come about, Madam; the likeness is so unmistakable.'  The bust was then sold, as announced in The Athenaeum of 3 January 1852, to Francis Roubiliac Conder, great-grandson of the sitter. When last at Sotheby's in 1926, it was still described as a self-portrait and remained, after acquisition by the NPG, so attributed until now.

Although it is rare for a sculptor to take a bust of himself, Mrs Esdaile accepts the family tradition that Roubiliac executed a self-portrait which was exhibited anonymously and also sold anonymously.

While there were several items in the sculptor's posthumous sale called, 'mask of Mr. Roubiliac's', none is specifically described as a self-portrait.

On the other hand, a self-portrait in oils is mentioned by Nollekens as being in the second Roubiliac sale, 11 June 1762.  The care-worn features shown in NPG 2145, reminiscent of the oil by Soldi of 1751, accord well with the concept of a late date, and the dress, natural hair and unbuttoned shirt, with the portrayal of an artist.


A 'Marble Busto' by Roubiliac, exhibited at the Society of Artists in 1760 (86) and 'A Bust' exhibited in 1761 (153) previously associated by Mrs Esdaile with the self-portrait, have now been identified from contemporary sources as Dr Frewin and Lord Ligonier.

In 1761 Roubiliac also exhibited a bust of Wilton (154) and Wilton exhibited 'A Bust of Mr. Roubiliac' (167) and 'Ditto in marble of Oliver Cromwell' (168). Now that Joseph Wilton is better known, it could well be that NPG 2145 is a particularly good example of his work, perhaps the bust exhibited in 1761 or, since 'marble' is specified only for Cromwell, more probably a version of it. ‘Mr. Roubilliac by Mr. Wilton', lot 8 under 'BUSTS in Plaister', 2nd day of the Roubiliac sale, 13 May 1762, may well be the plaster exhibited the previous year. As the Wilton bust was owned by Roubiliac, it may have been mistaken for a self-portrait. 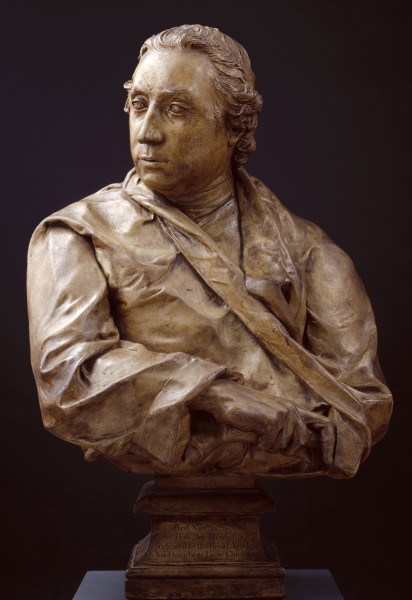 Plaster bust of Wilton with mallet by Roubiliac given to the Royal Academy in 1824 by Lady Frances Chambers, daughter of Joseph Wilton.