and the Thomas Missing Monument

It has been suggested that the monument was made ? by Henry Cheere with the bust subcontracted to Louis Francois Roubiliac

Matthew Craske in The Silent Rhetoric .... his excellent work on 18th Century Church monuments suggested the work of Roubiliac on the Thomas Missing bust and I concur - particularly as we now have some reasonable photographs to compare the two busts

For the thorny question of its removal for safekeeping? to the home of Sir Michael Hamilton,Lord Dartmouth and substitution with a resin replica see -

The report and conclusions of the Chichester Consistory Court

The bust was removed and conserved and a cast taken of it by Messrs Plowden and Smith in the late 1990's.

It was intended to replace the original with a resin cast payed for by Sir Michael Hamilton, a distant relative

It has since been replaced in its original position, with I believe a stainless steel dowel fixing it firmly to the sarcophagus.

Charles Gounter Nicoll, was baptised on 7 October 1704, the eldest son of George Gounter, MP of Racton, and his wife Judith Nicoll, daughter of Richard Nicoll of Norbiton Place, Surrey. His grandfather, Colonel George Gounter, helped Charles II to escape from England after the battle of Worcester. Gounter succeeded his father to Racton in 1718. He matriculated at New College, Oxford on 4 April 1722, aged 17.

In 1726, he changed his name by an Act of Parliament, adopting the surname of Nicoll, according to the deed of settlement of William Nicoll. He married Elizabeth Blundell, daughter of William Blundell of Basingstoke, Hampshire, whose mother Alice Blunden was the alleged victim of a notorious premature burial.

Gounter Nicoll was returned as Member of Parliament for Peterborough at a by-election on 29 January 1729. He voted with the government and was knighted as Knight of the Order of the Bath on 30 June 1732.

Gounter Nicoll died on 24 November 1733, having had two daughters Elizabeth, and Frances Catherine and was buried in St Peter's Church in Racton. His widow prosecuted a journalist, soon after her husband's death, for defaming him for accepting KB.

The cost of the prosecution was met from secret service funds. In 1735 she married Lord Lindsey, 3rd Duke of Ancaster with £70,000. Gounter Nicoll's daughter Frances Catherine married William Legge, 2nd Earl of Dartmouth with £100,000 in 1755.

This info needs checking - from Wikipedia 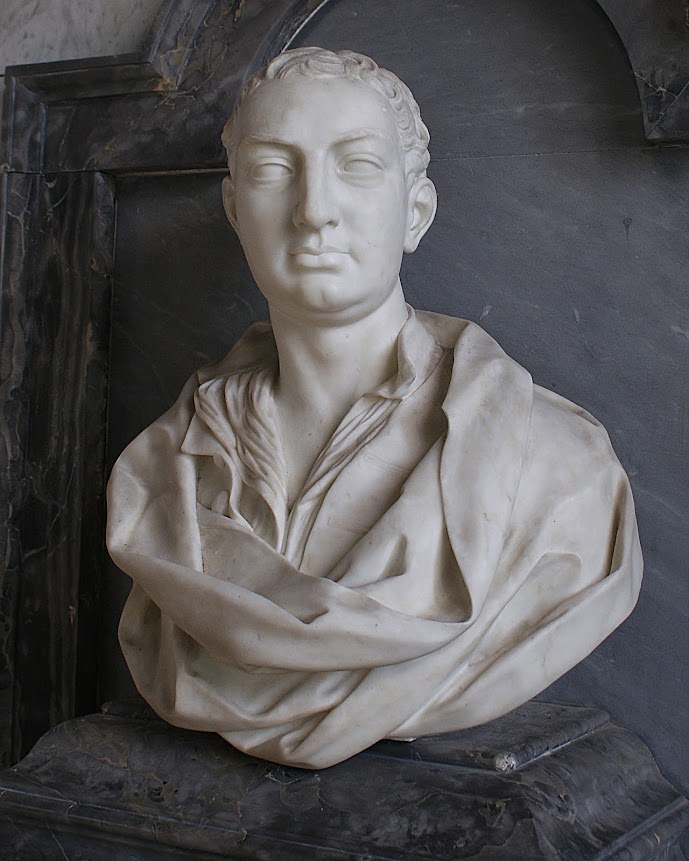 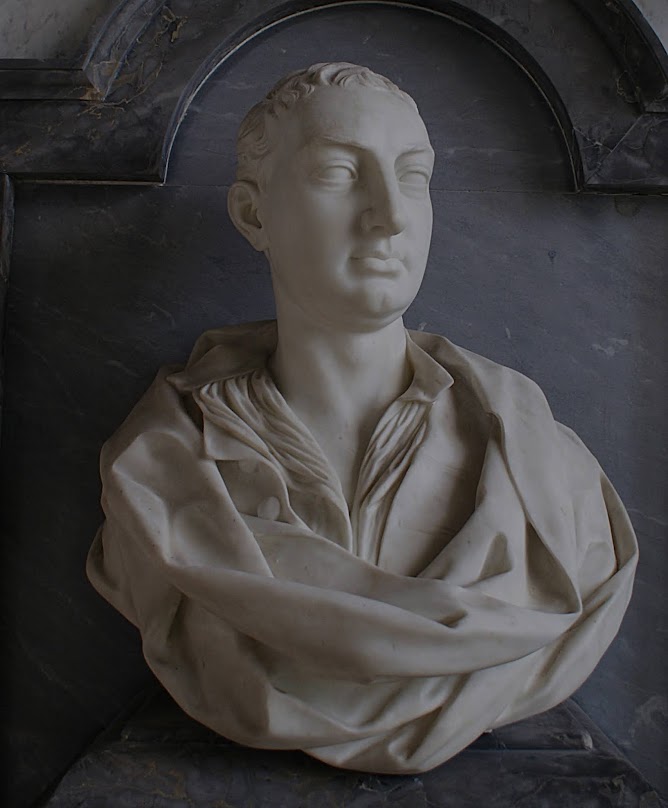 I am very grateful to him for kindly responding to my recent request for photographs. 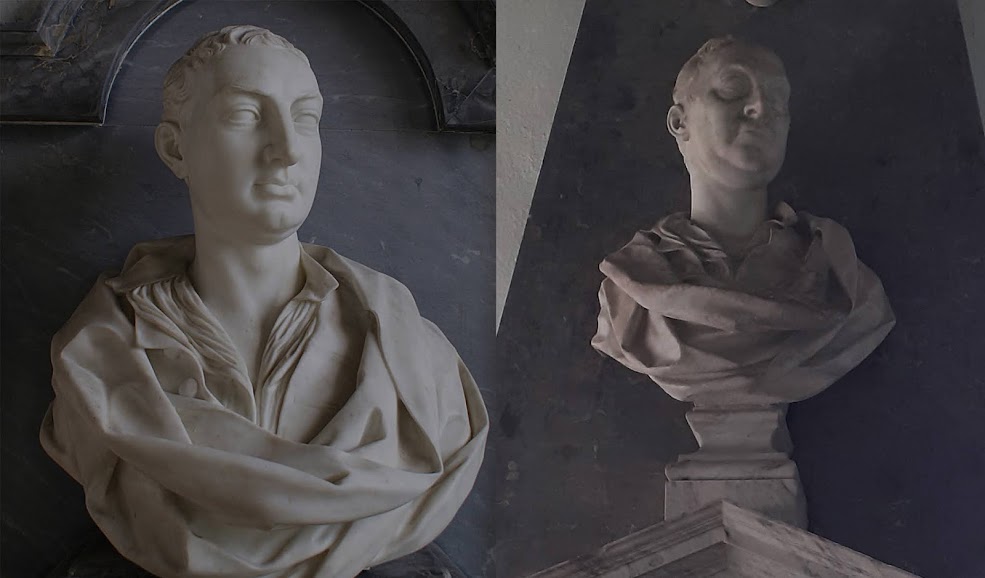 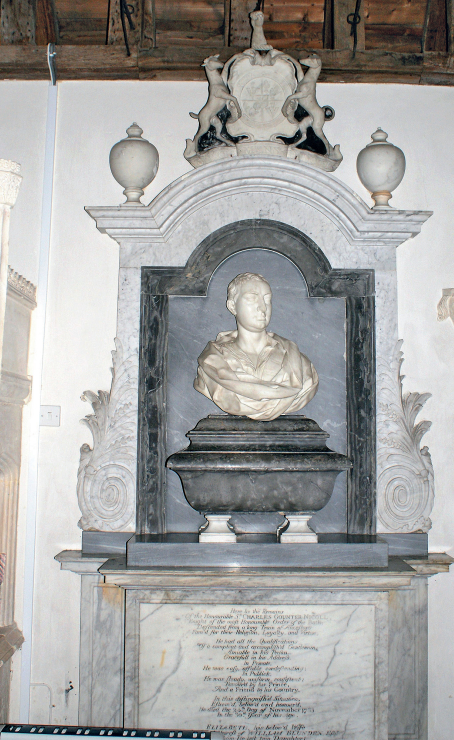 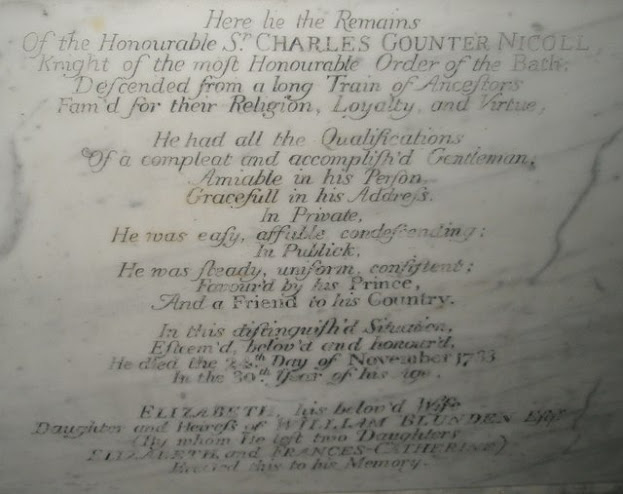 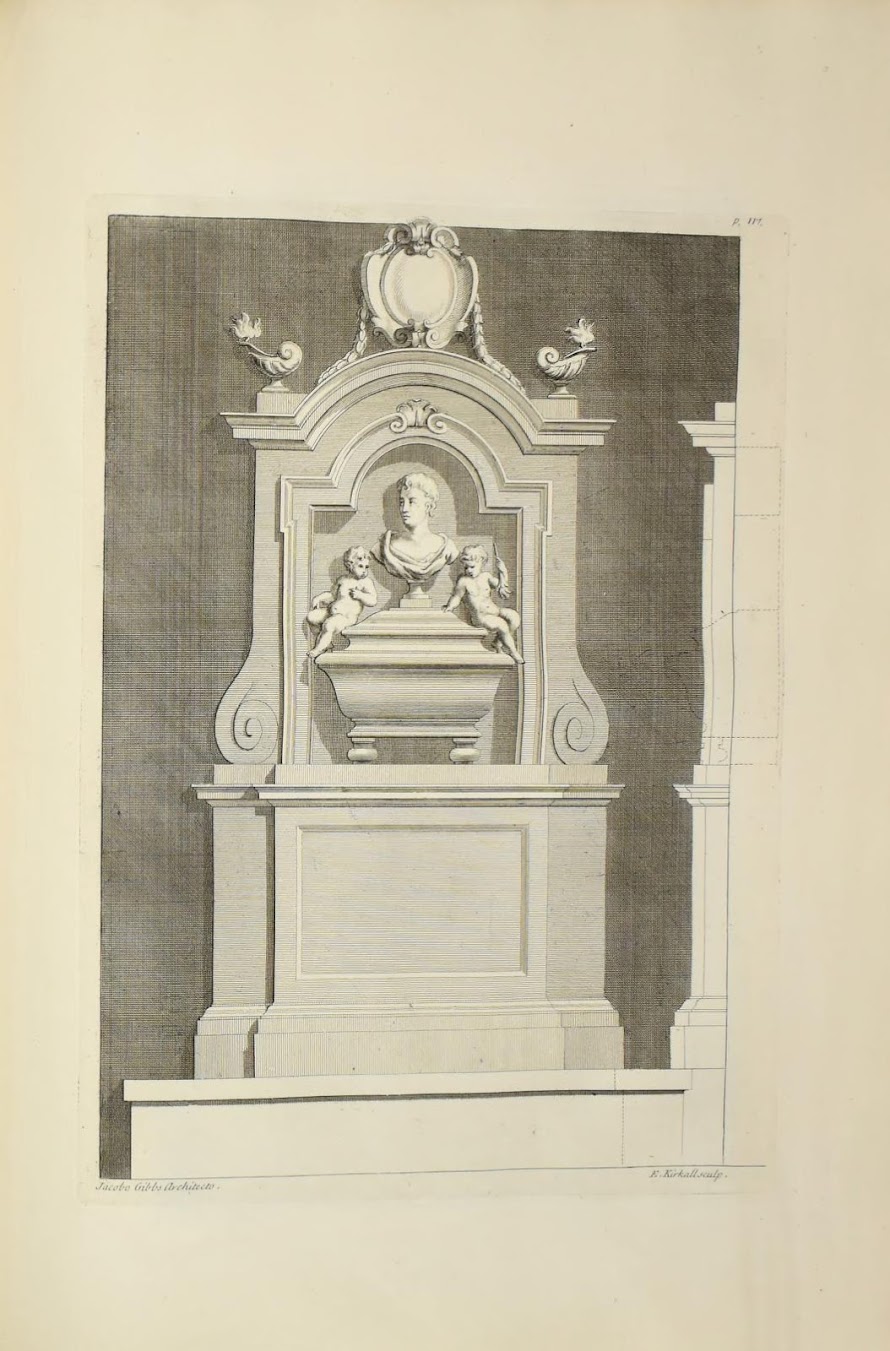 The design of this monument is based on plate CXVII from A Book of Architecture by James Gibbs pub 1728. 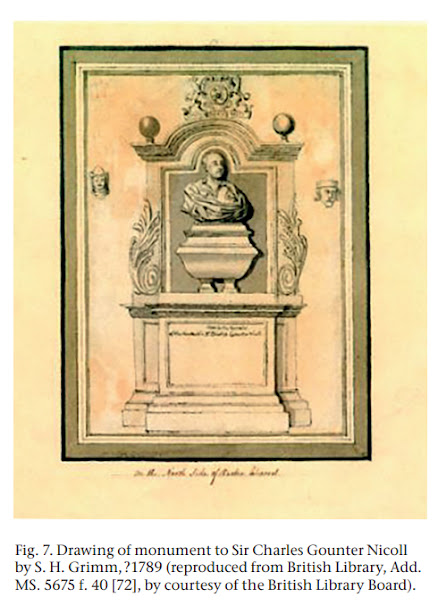 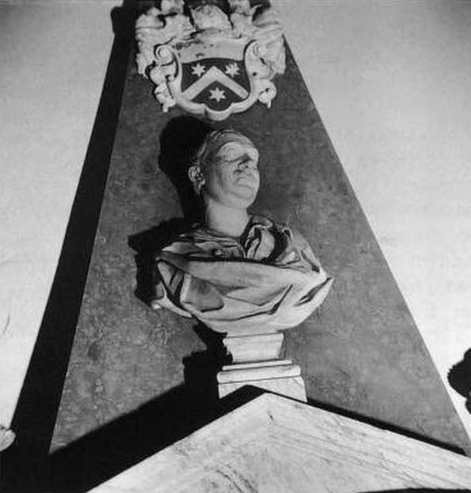 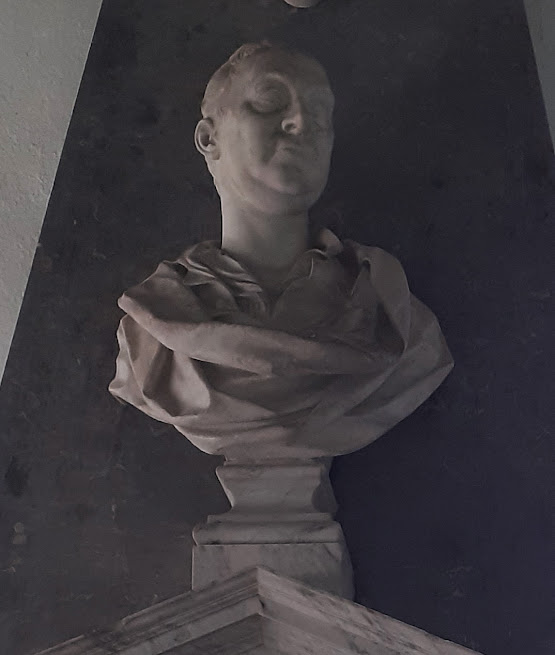 The Marble Bust on the Monument.

Thomas Missing built the south transept of the church in 1725 to accommodate his family pews and mausoleum. He was MP for Southampton and the merchant responsible for victualling Gibraltar. He was presumably responsible for the shaped gable and segmental windows to the south transept shown in a mid C19 illustration in the National Monuments Record.

A cursory inspection (given the poor quality of this photograph) suggests to me that the clothing on these two busts are the same.

In my experience Louis Francois Roubiliac was the only sculptor who reused the clothing from his prototypes on other busts - good examples of this are the bust of  George Streatfield, Jonathan Tyers and John Ray and the busts of Hawksmoor at All Souls Oxford and that on the Monument to William Wither. d.1732 in Wootton St Lawrence Church, Hampshire which also both use the same almost baroque drapery.

Thomas Missing was made freeman and alderman of Southampton in January 1711.

In March 1715 he obtained a lucrative contract for victualling the garrison at Gibraltar, which he held till his death.1 Five years later he was given similar contracts for troops in Nova Scotia and Newfoundland.2 Returned, presumably as a Whig, for Southampton in 1722, he was defeated in 1727. In September 1728 he proposed to the board of Trade that ‘as he hath a correspondence that way and hath with reputation carried over a great many to America’, he should be engaged to transport yearly a number of Protestant Palatines to Carolina ‘and victual them till they can support themselves’  He died 6 July 1733. 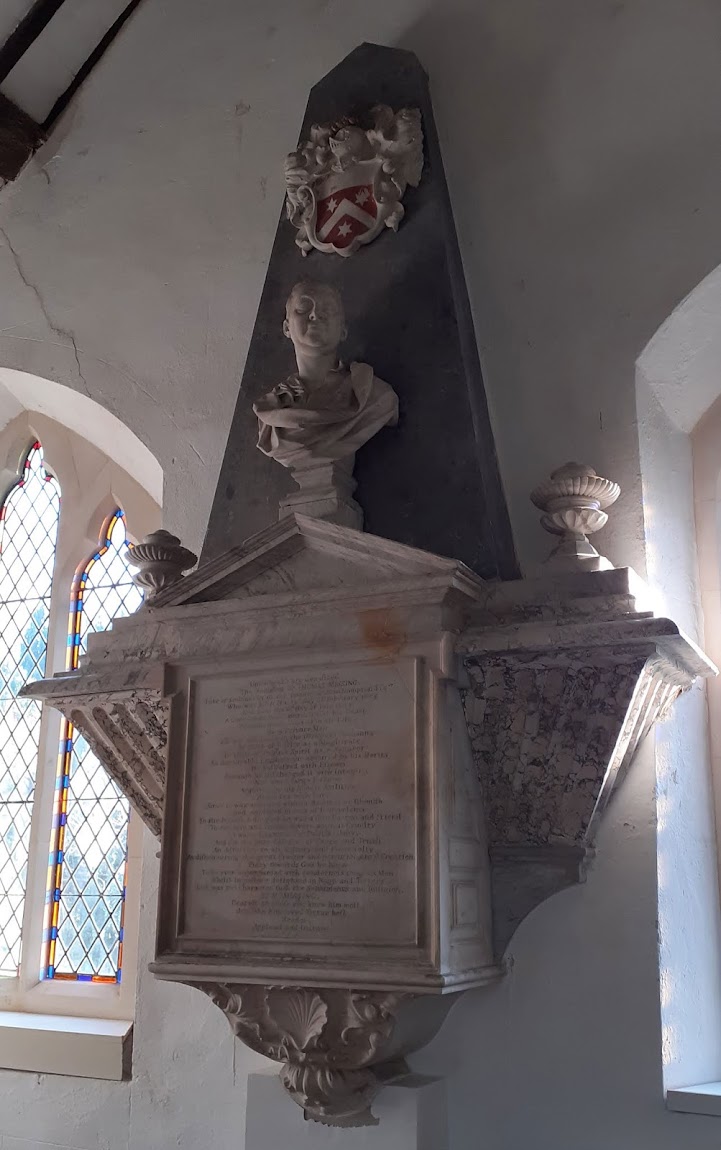 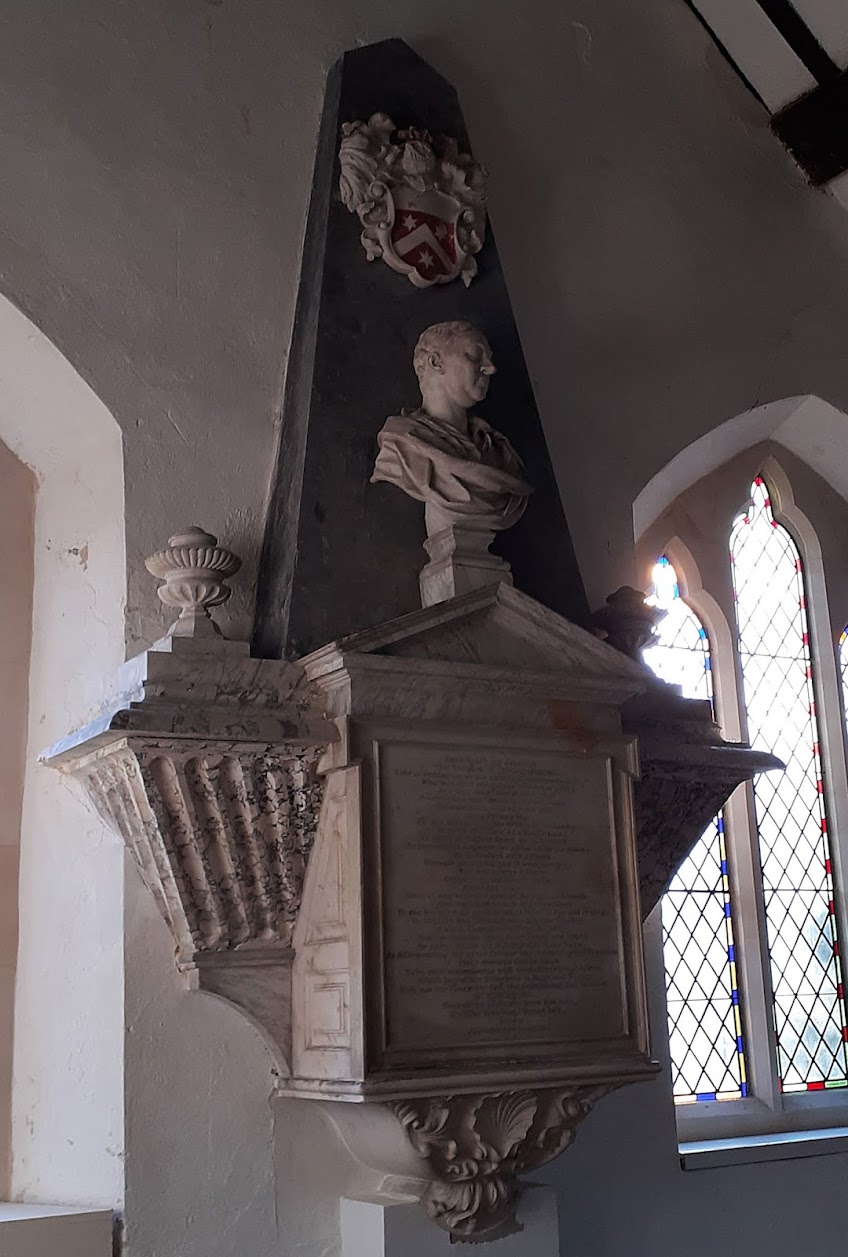 For Roubiliacs repeated use of  similar drapery on busts see -
See - http://bathartandarchitecture.blogspot.com/2018/05/the-portrait-sculpture-in-codrington_14.html
Posted by David Bridgwater at 01:31