Bust of a Moor by Francis Harwood

Bust of a Moor 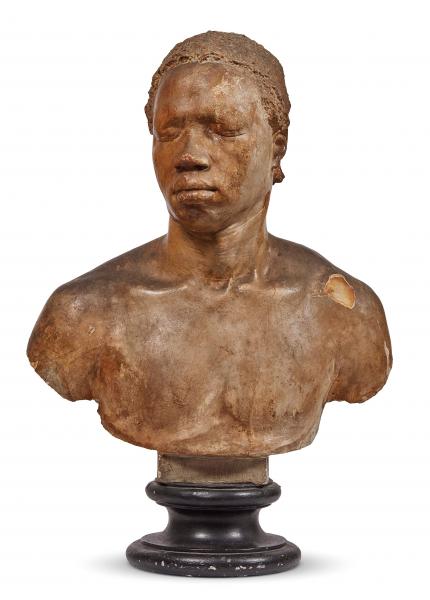 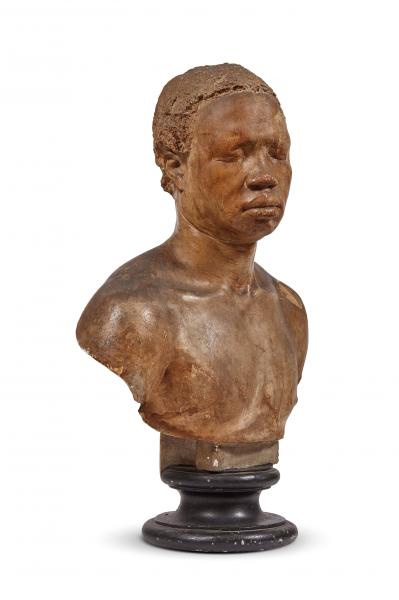 In the absence of high resolution photographs - it would appear that this bust is the prototype for the two busts below but at this point I cannot be 100% sure - the scar on the forehead is not visible and there are real differences in the hair.

What to me is plainly obvious to me is that this bust has been taken from life - the closed eyes suggest that a mould was created around the head and shoulders of the model and a cast then taken.

In order to make the marble busts the eyes would have had to be remodelled and carved but the bust and the rest of the head could be relatively easily transferred to the marble with the aid of a pointing machine.

It is my belief that Roubiliac would have used this method on more than one occasion. 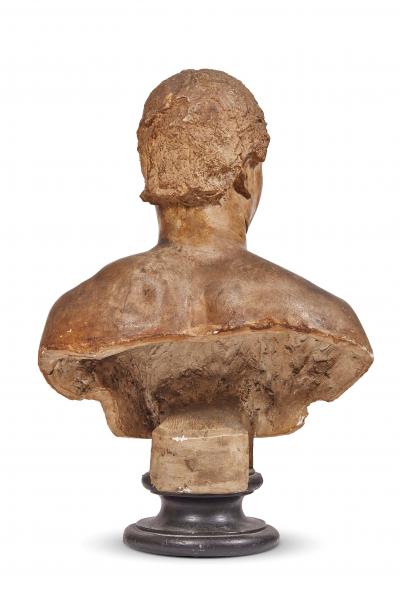 Bust of a Black Man

The centre website is rather vague on the provenance of this remarkable bust.

Before Paul Mellon bought it in 1967, the Yale bust had been part of the Esterhazy Collection in Vienna, where it was misattributed to the Renaissance artist Alessandro Vittoria (1525–1608) and called “The Blackamoor”, and in 2006 it became part of the Yale Center for British Art collection. 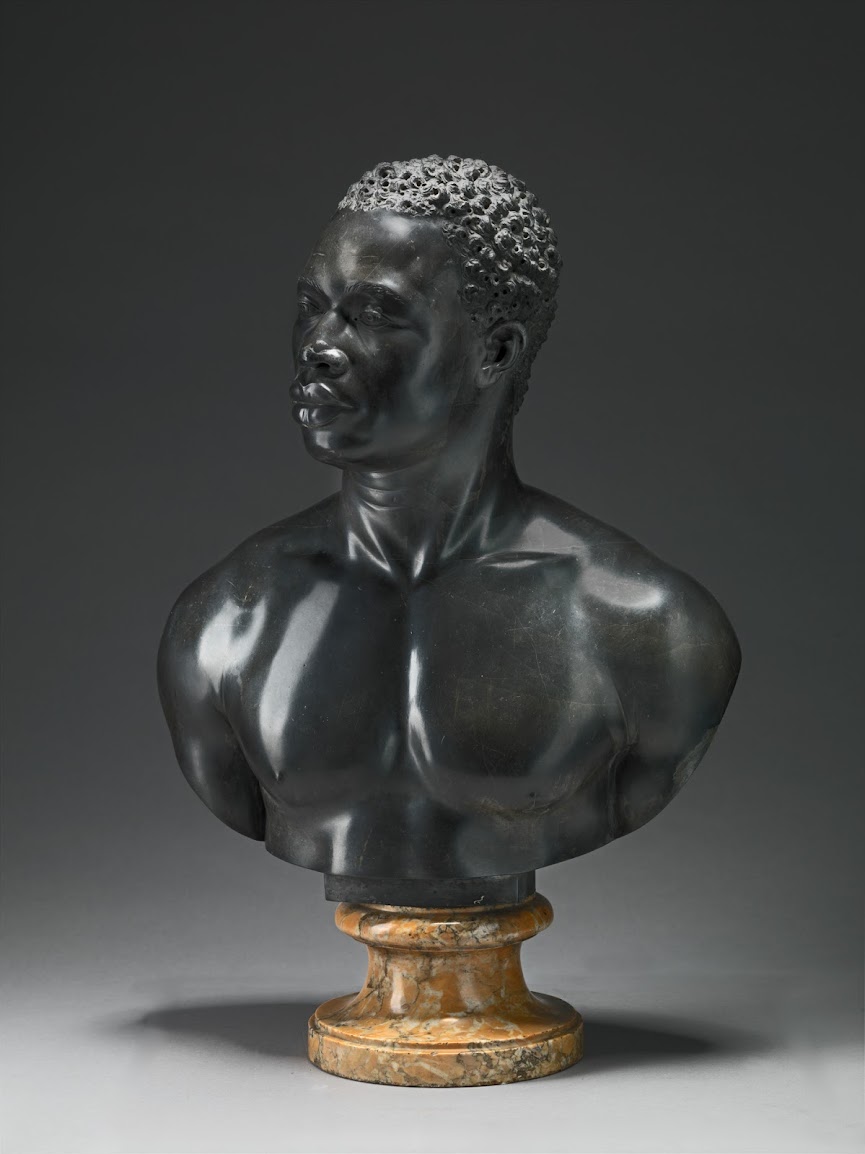 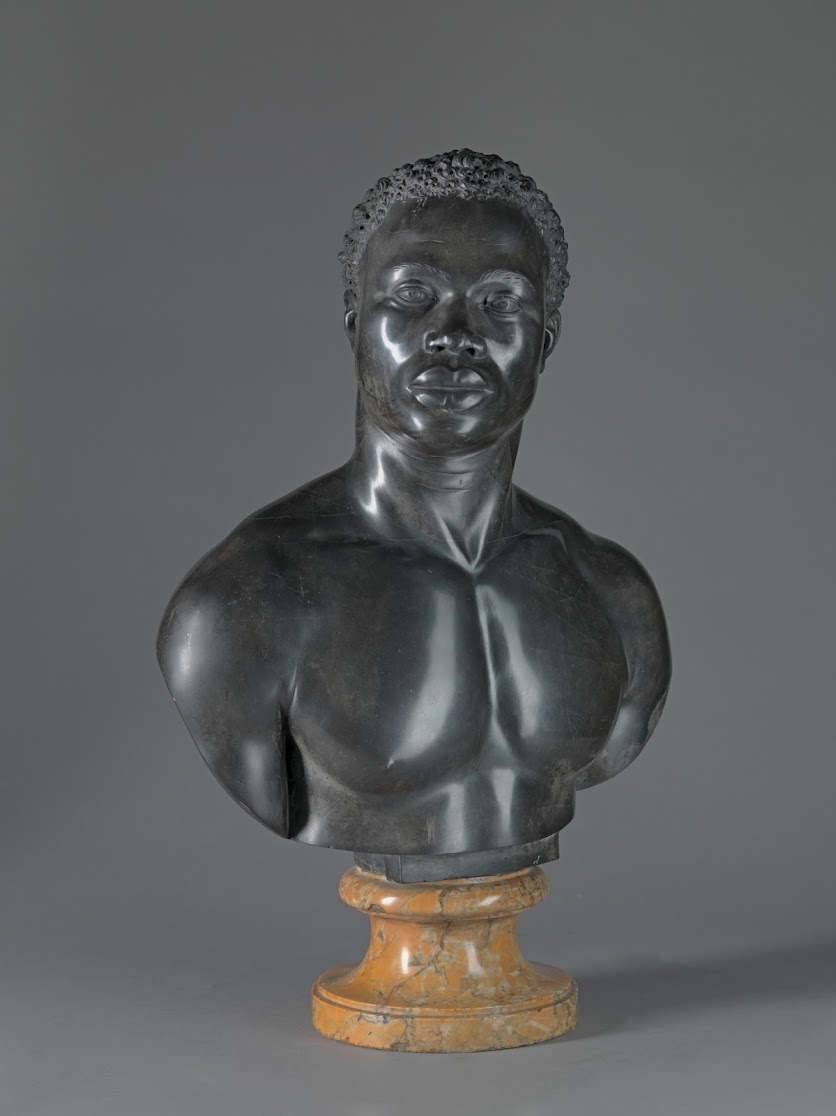 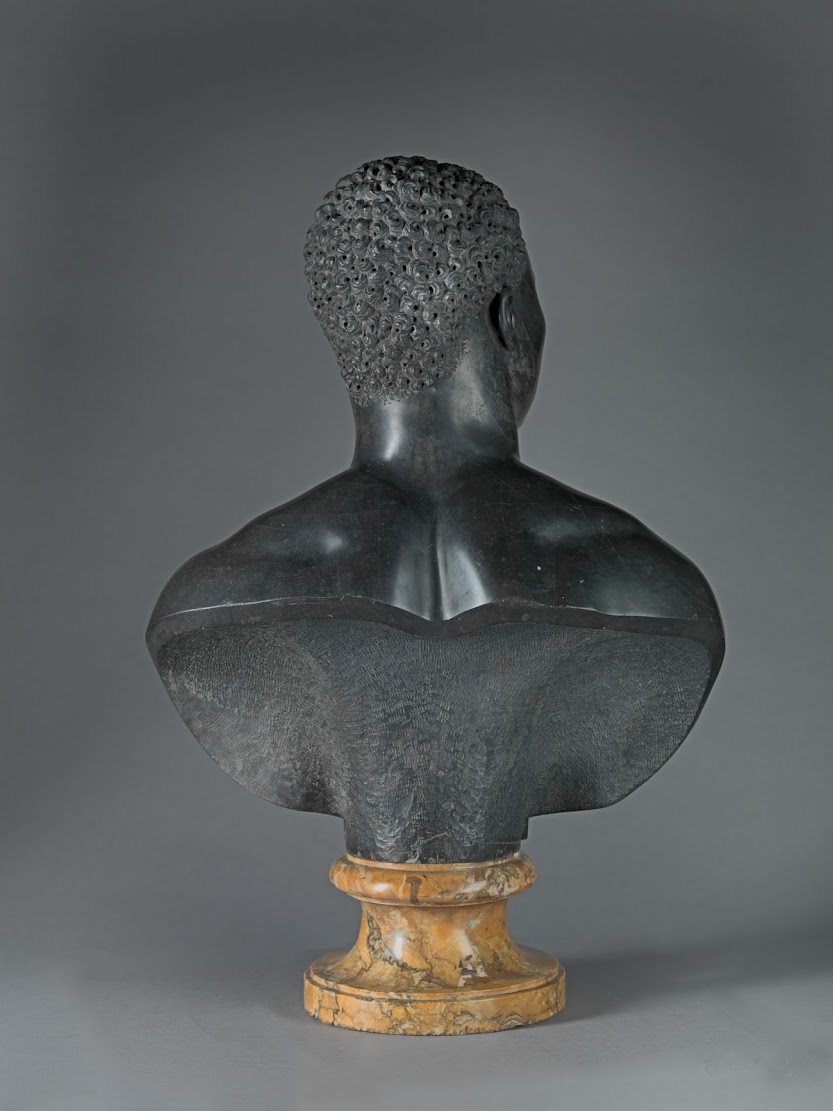 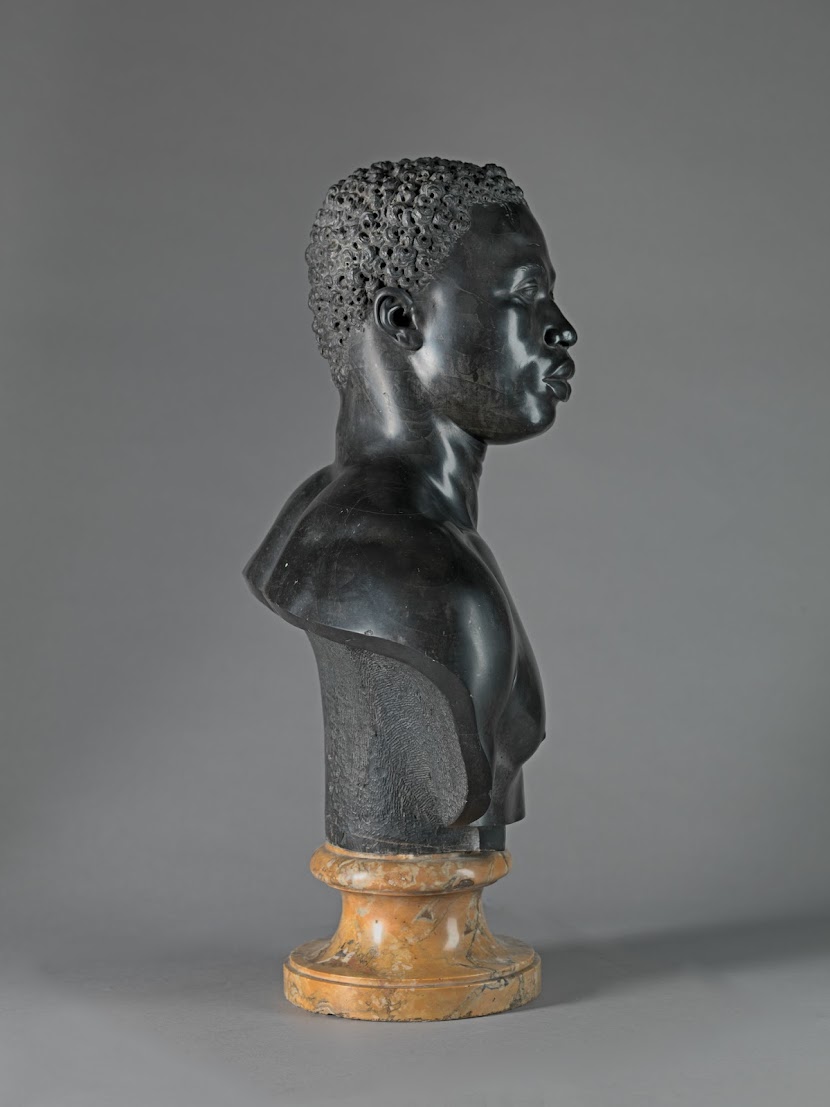 Excellent images Courtesey
https://collections.britishart.yale.edu/vufind/Record/1669707
In my previous post I wrote

"This remarkable bust may be a portrait: details such as the small scar on the man’s forehead and the subtle depressions in the skin around his temples, nose, and eyes suggest close study of an individual sitter. However, the sculptor Francis Harwood, who was based in Italy, specialized in making copies of classical statues for sale to English Grand Tourists, and so it is also possible that this is a copy or adaptation of an Antique model."

"A third possibility is that the bust was made as an allegorical image of “Africa.” A passage from Joseph Baretti’s "Guide through the Royal Academy" (London, 1781) suggests that, by 1781, Harwood’s "Bust of a Man"—or something very similar—had entered the cast and sculpture collection of the Royal Academy. Though we cannot be sure that Baretti is referring to the sculpture on display here, his description suggests that works like it may have been difficult to categorize even in the eighteenth century: AFRICUS.

"For want of a better, I give this name to a Head of a Blackamoor, which is in the Niche of this Room.

A Friend of mine would have it called Boccar, or Boccor, an African King named in one of Juvenal’s Satires. But, as it has no ensigns of Royalty about it, I imagine it to be a Portrait of some Slave, if not a fanciful performance intended to characterise the general Look of the African faces.

Whatever it be, I think it a fine thing of the kind".

In the nineteenth century, Harwood’s bust was mistakenly believed to be a portrait of an athlete named Psyche in the service of the first Duke of Northumberland".

Another version of this sculpture, which bears Harwood’s signature and the date 1758, is now at the J. Paul Getty Museum.

Text above lifted from the Yale Centre for British Art  website 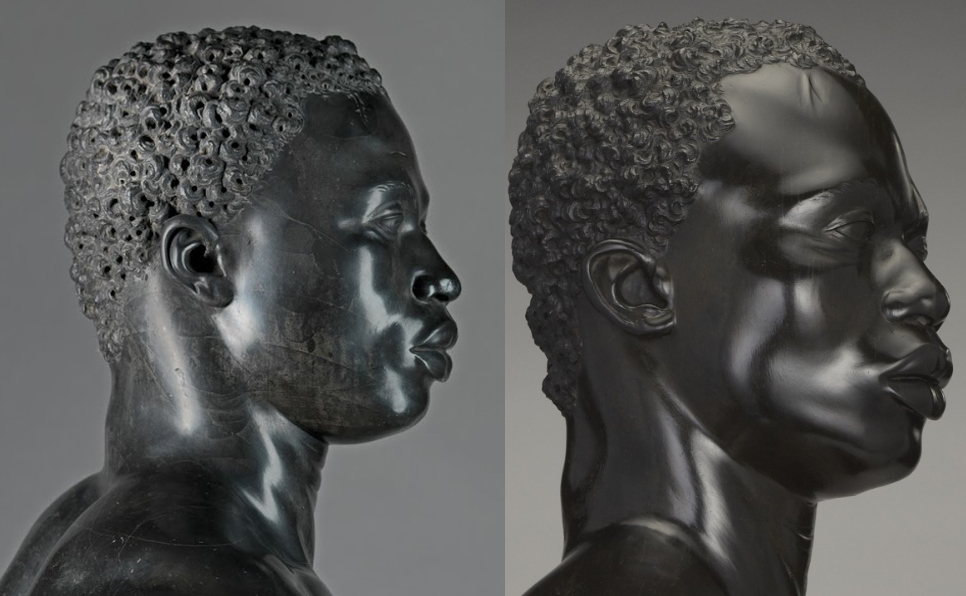 Photographs of the two busts shown here side by side for comparison.

The details of the ear make it clear that these busts are of the same man.

It would seem fairly obvious to me that the detail of the new scar on the forehead would suggest that the Yale bust is the original and that the Getty bust is a later version.

The scar on the Yale bust clearly shows the stitch marks which have healed over in the Getty bust.

the hair on the Yale bust has much deeper drilling and the curls are much more defined.

The early history and provenance of both of these busts is unclear.

It has been suggested that the date on the Getty bust has been recut, but the inscribed signature is close to that on other busts such as the Sotheby's Caracalla.

The date of 1758 on the Getty busts implies that it was sculpted in Italy.

Bust of A Man

at the J Paul Getty Museum

see also, for a rather verbose article on the two busts: 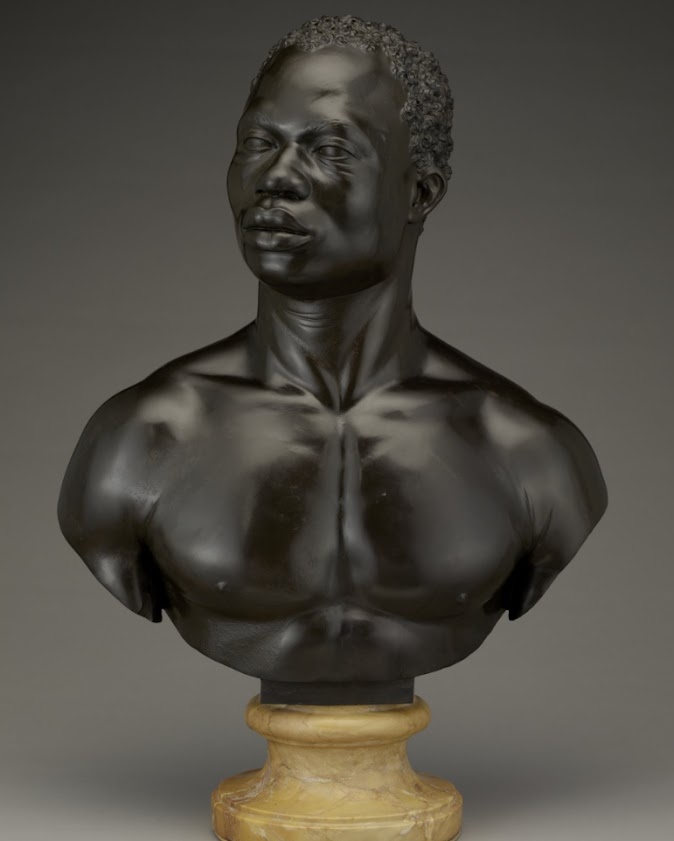 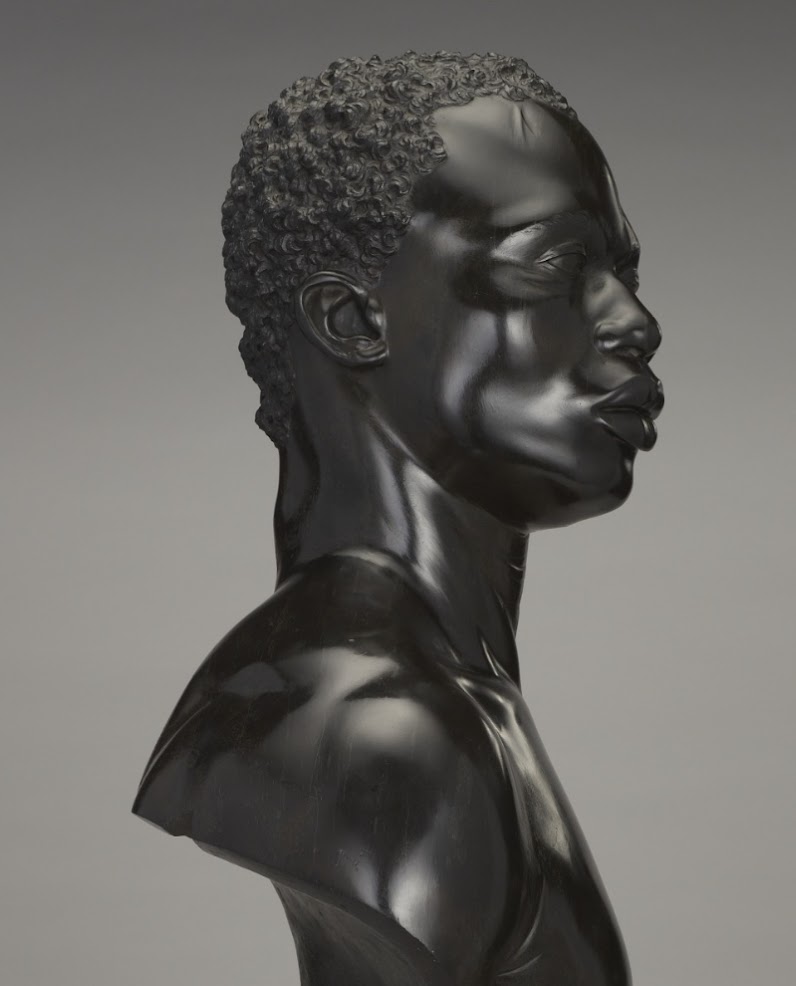 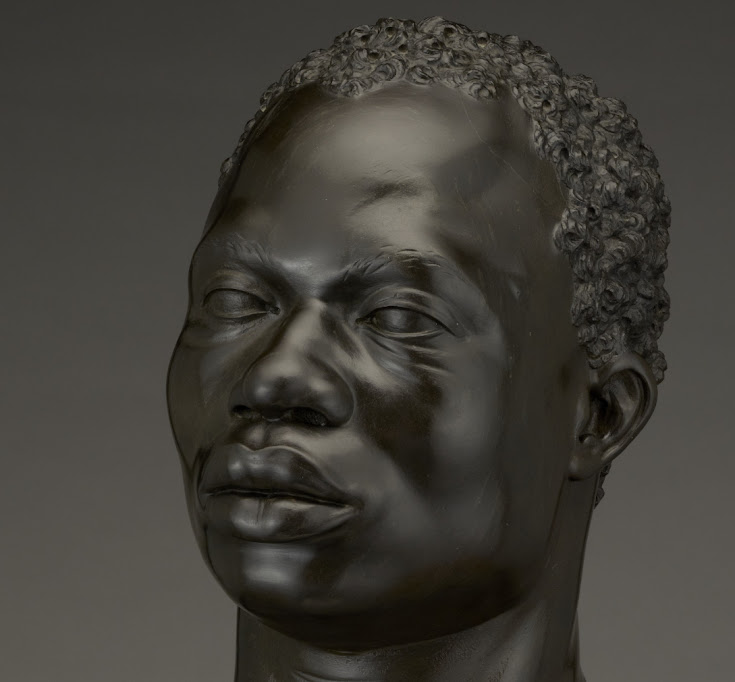 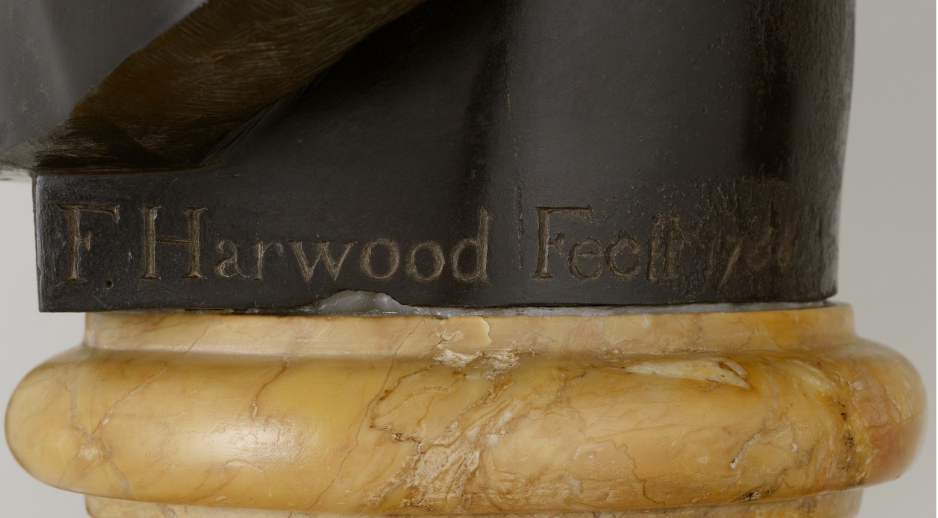 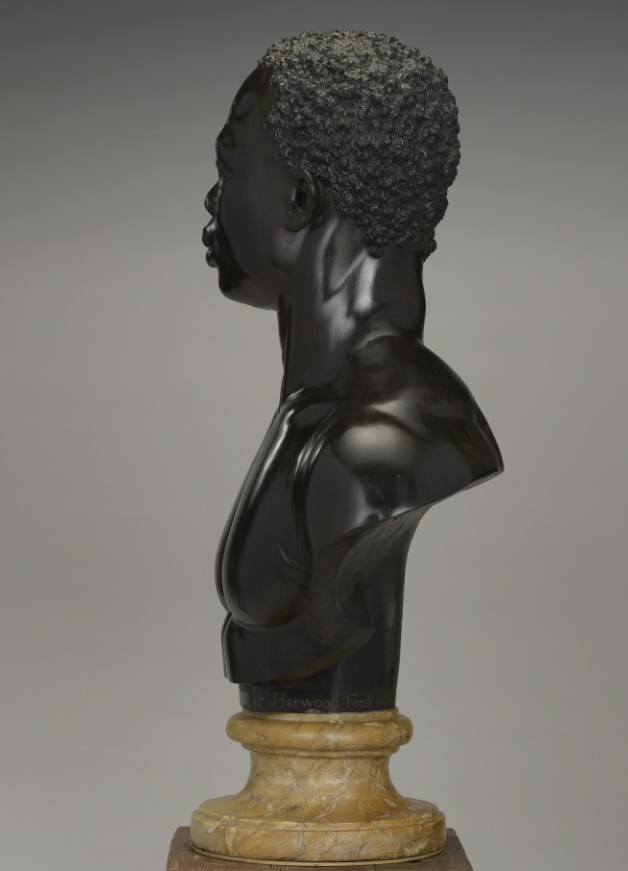 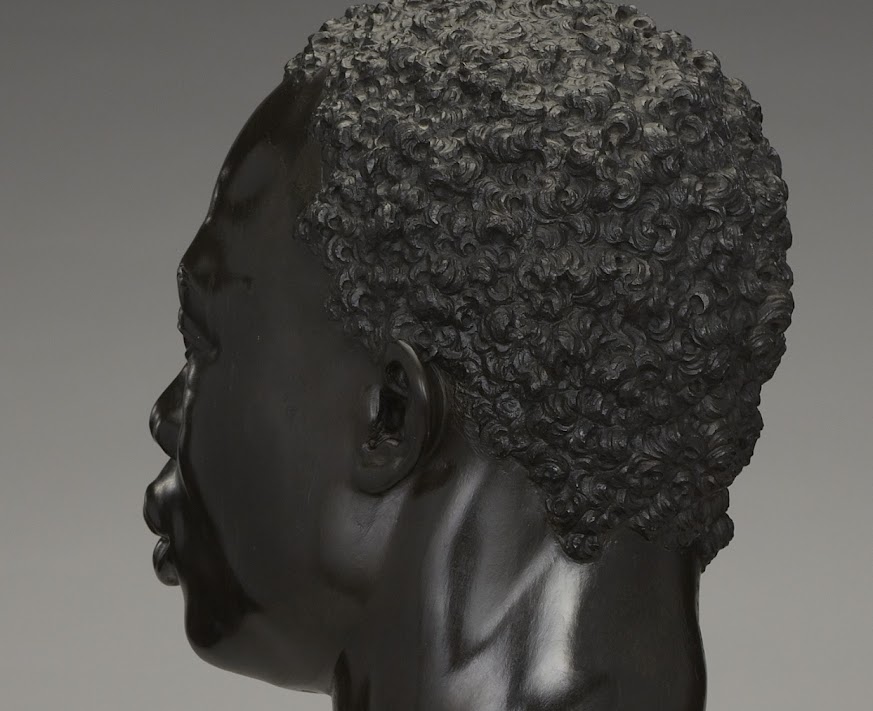 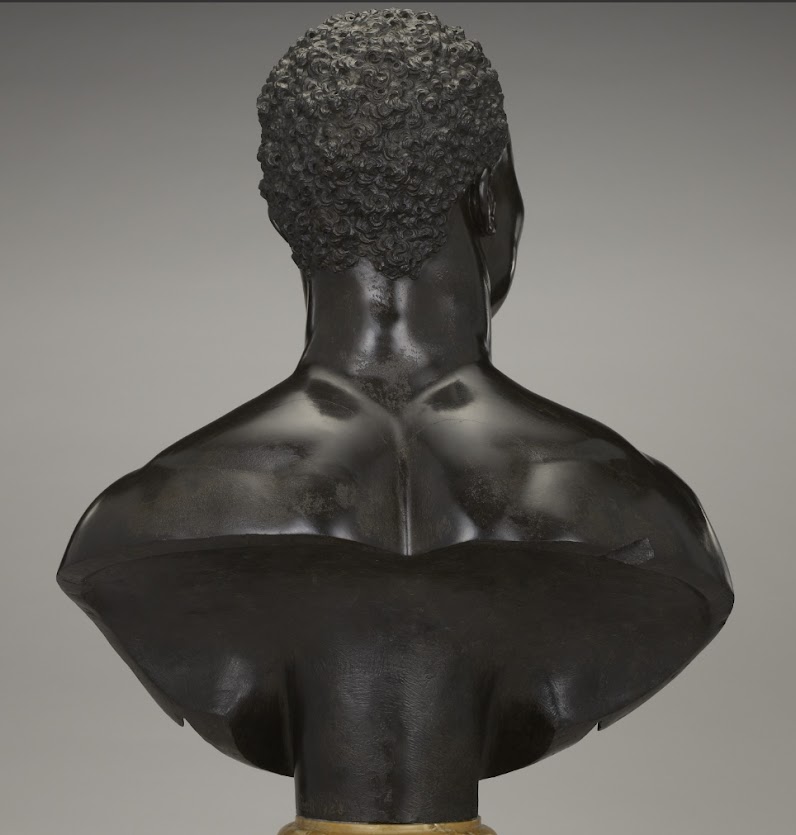 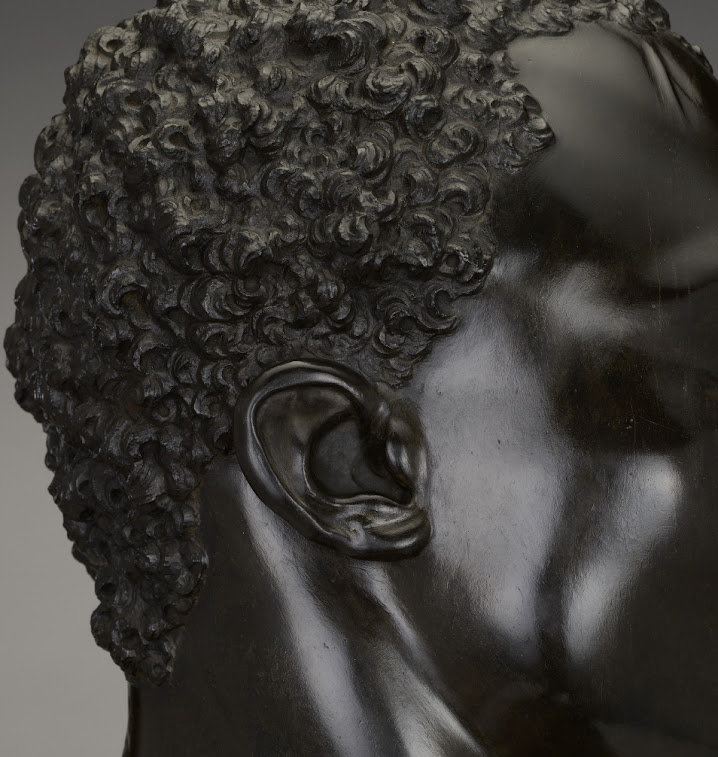 The surface of this bust has undergone at least one program of restoration - the Getty "conservation work and analysis shows that the bust’s original, eighteenth-century coating was a medium, translucent brown.

In fact, conservators have in recent years removed much of the thickly applied black paint, wax, and shellac that had been applied to the bust in the 1980s, in an attempt to bring the surface colour closer to the varied texture and tone of the underlying marble".

"With noble bearing, this man proudly holds his chin high above his powerful chest. Sculptor Francis Harwood chose a black stone to reproduce the sitter's skin tone. Harwood also chose an unusual antique format for the bust, terminating it in a wide arc below the man's pectoral muscles. Harwood was familiar with antique sculptures from time spent in Florence reproducing and copying them. He may have deliberately used this elegant, rounded termination, which includes the entire, unclothed chest and shoulders, to evoke associations with ancient busts of notable men. Although the identity of the sitter is unknown, the scar on his face suggests that this is a portrait of a specific individual. This work may be one of the earliest sculpted portraits of a Black individual by a European".

Described in the 1865 after-death inventory of Stanwick Hall as "a fine bust in black marble - W. Richmond the pugilist - on Italian Marble Plinth."

Percy Family, English (Stanwick Hall, Yorkshire, England) [sold, Anderson and Garland, Stanwick Hall, Yorkshire, May (no day), 1922, lot 189]    -  description of lot 189 as "A Carved Black Marble Bust of a Negro, 27 in. high, by F. Harwood, on circular Sienna marble plinth and wood pedestal, 4ft, high (in the margin in black inck is indicated the amount of 2.10 pounds)

Posted by David Bridgwater at 07:53