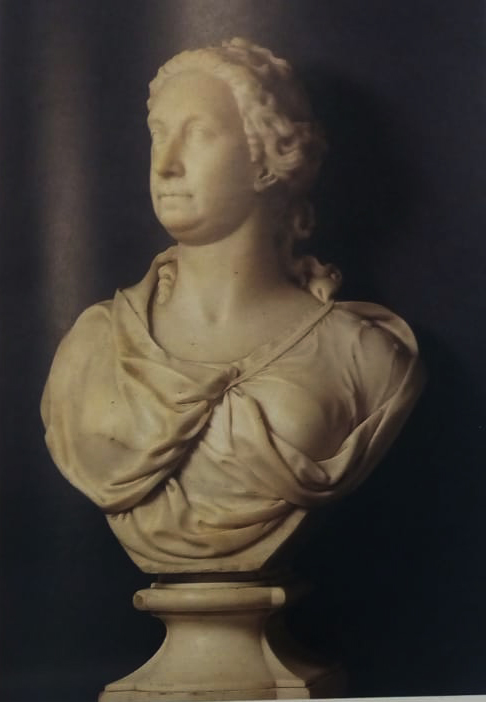 Illustrated in the Exhibition Catalogue: The Treasure Houses of Great Britain, 500 Years of Private Patronage and Art Collecting, 1985.
The entry written by Malcolm Baker makes the assertion that this bust was carved by Anglo/Danish Sculptor Charles Stanley with the socle carved by Joseph Wilton to make it match the bust of Leake Okeover by Wilton (below) signed by Wilton and dated 1762.
I have not examined either but the different treatment of the backs of these busts would support the theory.
The theory is probably clinched by details of the drapery on the bust of Lady Elizabeth Maynard on the Charles Maynard Monument of 1746 by Stanley at St Mary's Little Easton, Essex., which are the same as the drapery on the Mary Okeover bust as pointed out by Malcolm Baker in the exhibition catalogue.
I think a visit to Little Easton is in order to obtain better photographs of the individual elements.
I might be in error but this is the only the second case I know of of a sculptor using the same drapery on busts of different sitters the first being several examples by Roubiliac. Suggesting that they used similar methods of reproducing their busts with some sort of pointing machine.
This begs the question - was there a connection between Stanley and Roubiliac or is it just coincidence that they used similar methods to reproduce their busts. 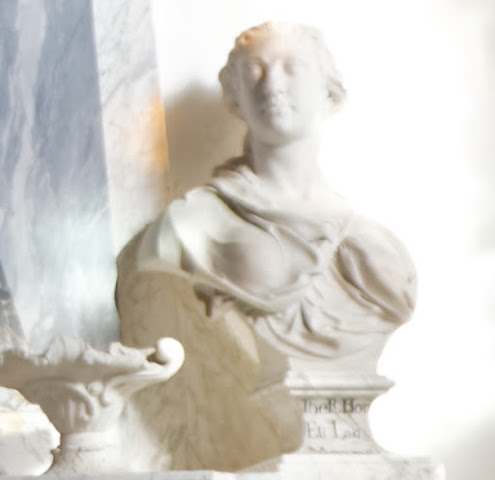 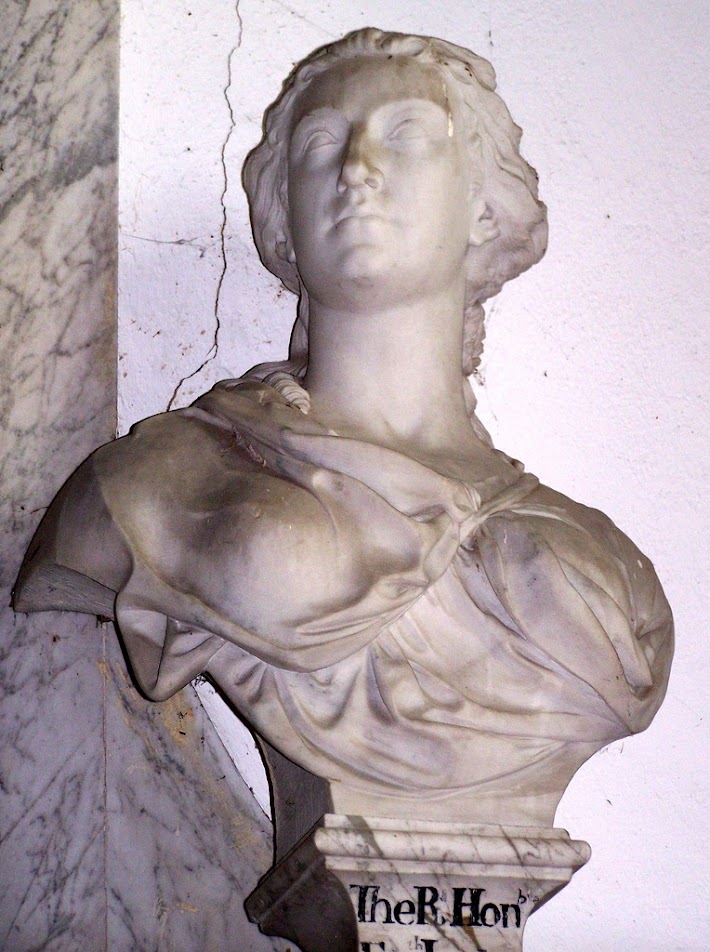 The Maynard Monument
Erected by Charles Lord Maynard
1746.
http://bathartandarchitecture.blogspot.com/2019/03/maynard-monument-by-charles-stanley.html
Correspondence between Leake Okeover and his architect John Sanderson for works at Okeover Hall,  between 1745 and 1746 states that Charles Stanley had been engaged by Sanderson for works on the interior.
Stanley appears to have provided a ceiling with stucco work of Bachus and Ariadne in the drawing room to superintend gilding of picture frames and to provide chimneypieces and also a busto.
By October 1746, as correspondence between Okeover and Sanderson make clear, Stanley had left England to return to Denmark - "he was gone off -.my whole account not so much entered upon
Information here from Decorative Plasterwork in Great Britain by Geoffrey Beard pub Phaidon, 1975.
I have touched on Stanley his sculpture and plasterwork at Langley Park Norfolk in my blog post -
http://english18thcenturyportraitsculpture.blogspot.com/2019/02/the-huntington-marble-bust-of-oliver.html
and
http://bathartandarchitecture.blogspot.com/2019/03/maynard-monument-by-charles-stanley.html
Stanley was also responsible for the monument to Humphrey Smith d.1743, in Ely Cathedral - the monument was designed and erected by John Sanderson
see my next post.
I intend to return to him in due course. 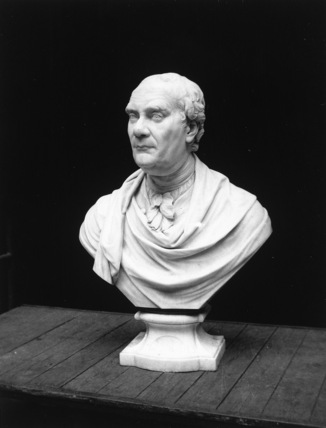 Leake Okeover
by Joseph Wilton
image from
Okeover Hall built 1745 - 46 - only the East Wing Survives
Posted by David Bridgwater at 08:37