The Marble Bust of Handel by Roubiliac at the Foundling Hospital Museum - and terracotta busts of Handel, Shakespeare and Milton by Roubiliac - update.

The Original Terracotta Bust of Handel
by Roubiliac
at the Foundling Hospital Museum. 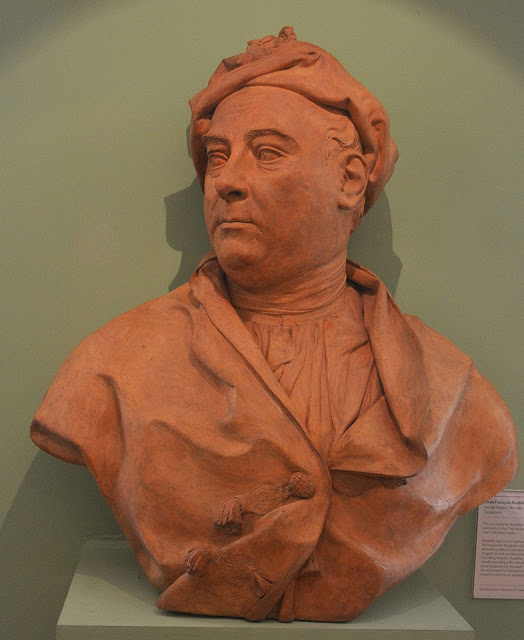 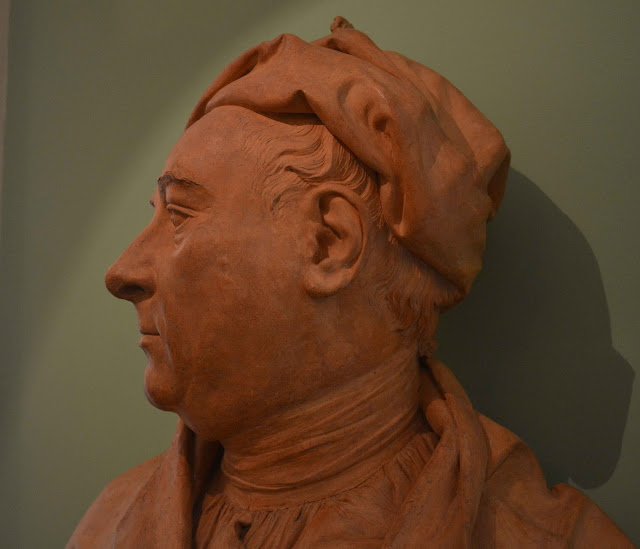 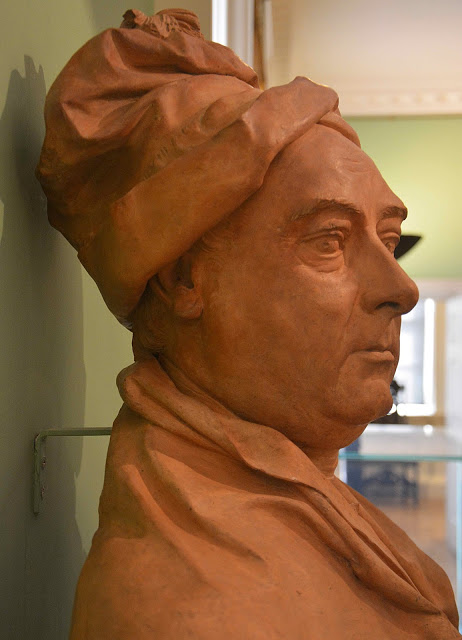 Photographs above taken by the author 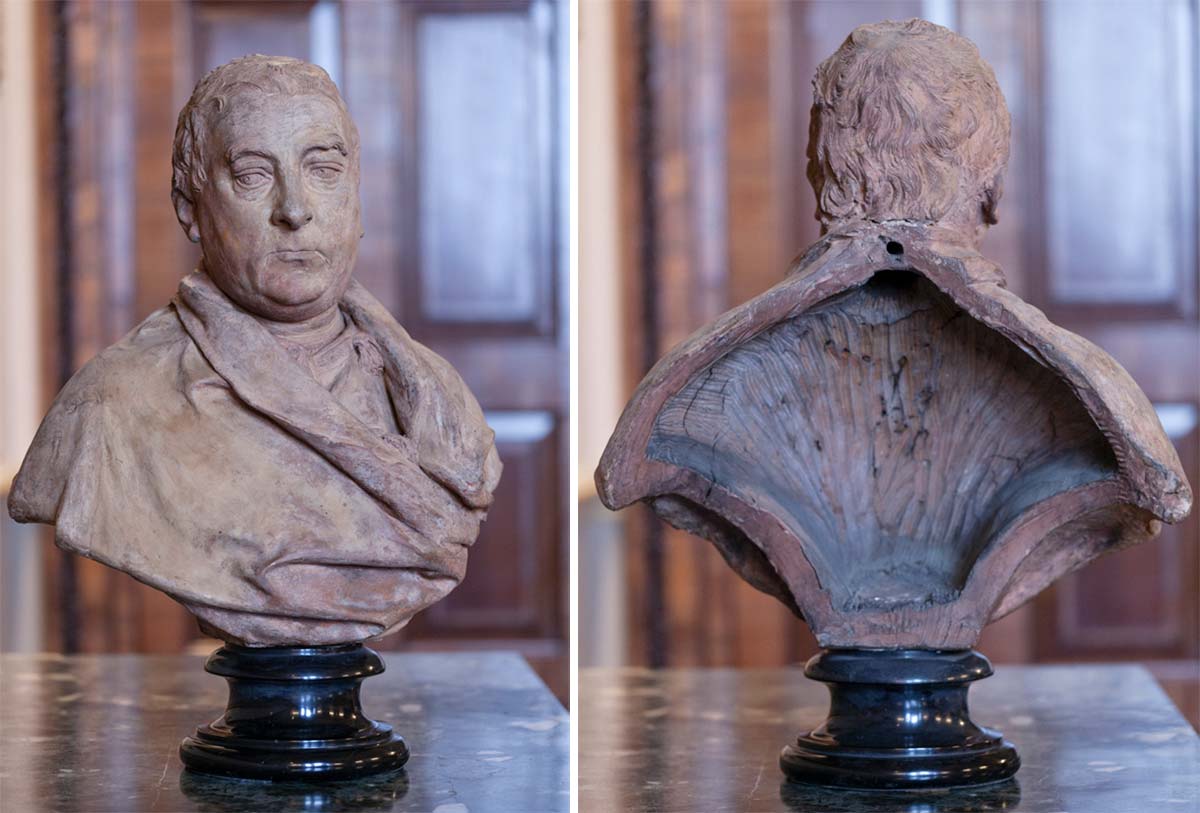 The Grimsthorpe terracotta (above).

I have written at great length on the busts of Handel

There were 5 Plaster busts, one terracotta and two moulds included in the sale .

Further references to the busts of Handel in the 18th and 19th centuries. 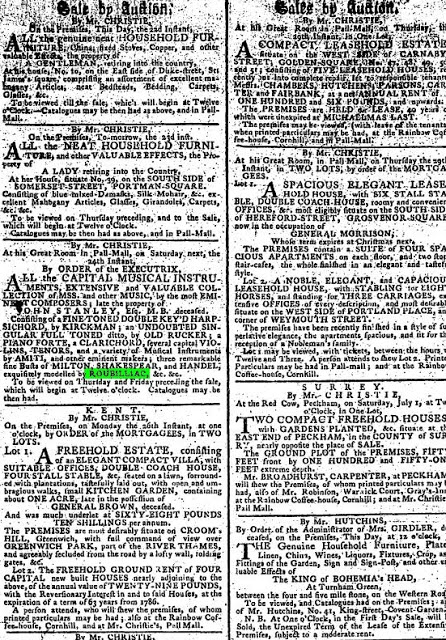 This is all the more remarkable given that John Stanley (1712 -1786) master of the Kings music was blinded in accident at the age of two. Stanley began a partnership with John Christopher Smith Jnr the former amanuensis of Handel after the death of Handel in 1760. 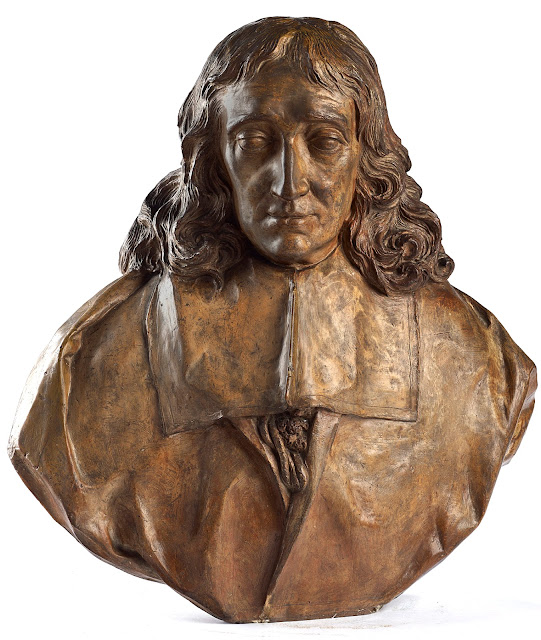 I have previously written in this blog on the Garrick Club terracotta of Shakespeare and the apocryphal story of its discovery walled up in the Dukes Theatre in Portugal Street, Lincolns Inn Fields.

This  Communication in 2015 from Marcus Risdell former curator of the Garrick Club Collection.

'Roubiliac original terracotta bust 1) Garrick Club bust, (rediscovered by William Clift, first curator of the Hunterian Museum) in 1834 (source is Clift's papers held at Royal College of Surgeons) it was found in the garden of No 39 Lincoln's Inn Fields by a water pump in a position I have identified in surveys made by the Royal College of Surgeons to have been right by the main entrance.

It became known through association of the theatre as the Davenant Bust, but as we now suspect was sited at the theatre by Henry Giffard who attempted the last theatrical season there in 1742-43 (Incidentally Giffard also used a full size Scheemakers Shakespeare as a pantomime stage prop at his previous theatre Goodman's Fields where he first put on Garrick.

This I covered in the catalogue: The Face & Figure of Shakespeare at Orleans House Gallery. Anyway I digress: the bust passed to Professor Owen who showed it at the Crystal palace, where it came to the attention of the Duke of Devonshire who bought it and gave it to the Garrick Club, who incidentally used to use it as a door stop'.

I think not an unusual fate for portrait busts - the  16th century Lumley / Pomfret marble bust of Henry VIII suffered similar humiliation whilst it was in theAshmolean Museum offices, until rescued in the mid 20th century ( communication from Michael Vickers). 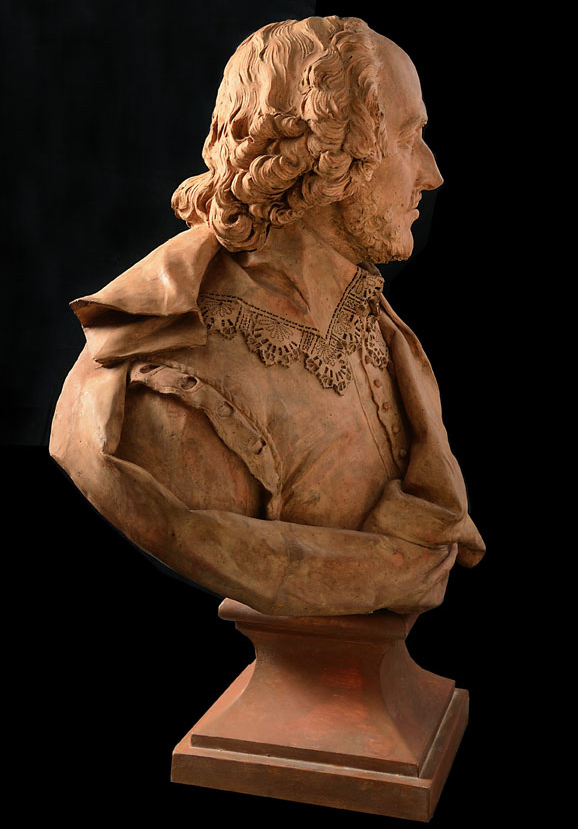 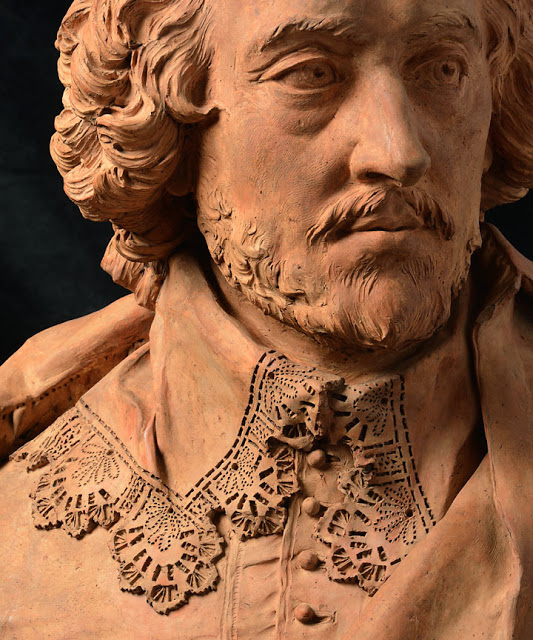 See my original post on the Garrick Club bust of Shakespeare

There is no marble version of the Garrick or British Museum bust, but to confuse issues there is a marble bust of Shakespeare which can very reasonably be attributed to Roubiliac (below).

Given the usual practise of making a terracotta prototype for a marble bust it is possible that the Morning Post news cutting refers to another missing terracotta, one of three mentioned in the Roubiliac sale catalogue.

Perhaps Shakespeare Lot 74 sold on the fourth day of the Roubiliac Sale on Saturday 15th May 1762.

Given that there are no marble versions of the terracotta Garrick / Davenant and British Museum Maty busts extant or mentioned elsewhere this is a very distinct possibility. 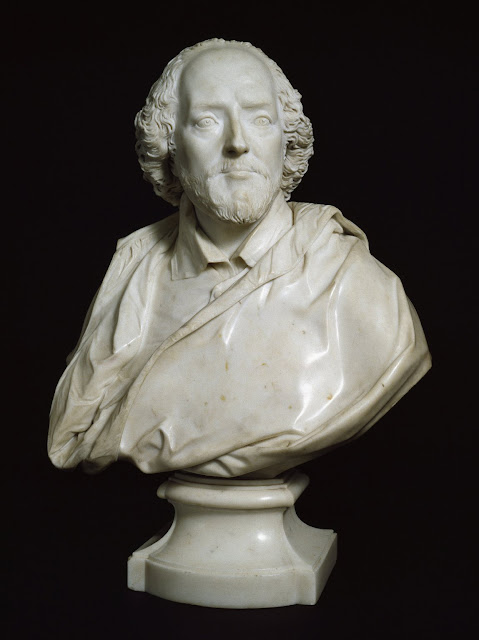 The British Museum terracotta bust of Shakespeare was bought by Dr Matthew Matey at the Posthumous Roubiliac Sale held at the Studio in St Martin's Lane by Langfords of the Piazza Covent Garden.

The only copy so far discovered of the sale catalogue is in the Finberg Collection at the British Museum. Unfortunately there is no annotation.


A serendipitous discovery whilst searching for something else:

The terracotta bust of Handel by Roubiliac with Mr Rodd formerly in the possession of James Bartleman (1769 - 1821), who had purchased it at the sale of Bryant Barret (1743 - 1809) proprietor of Vauxhall Gardens, who had taken over the management on the death of his father in law Jonathan Tyers the Younger in 1792

On the recommendation of the ill fated sculptor William Behnes (1795 - 1864) it was purchased by Sir Frederick Pollock, Lord Chief Baron of the Exchequer and a Vice President of the Hospital and presented to the Hospital. 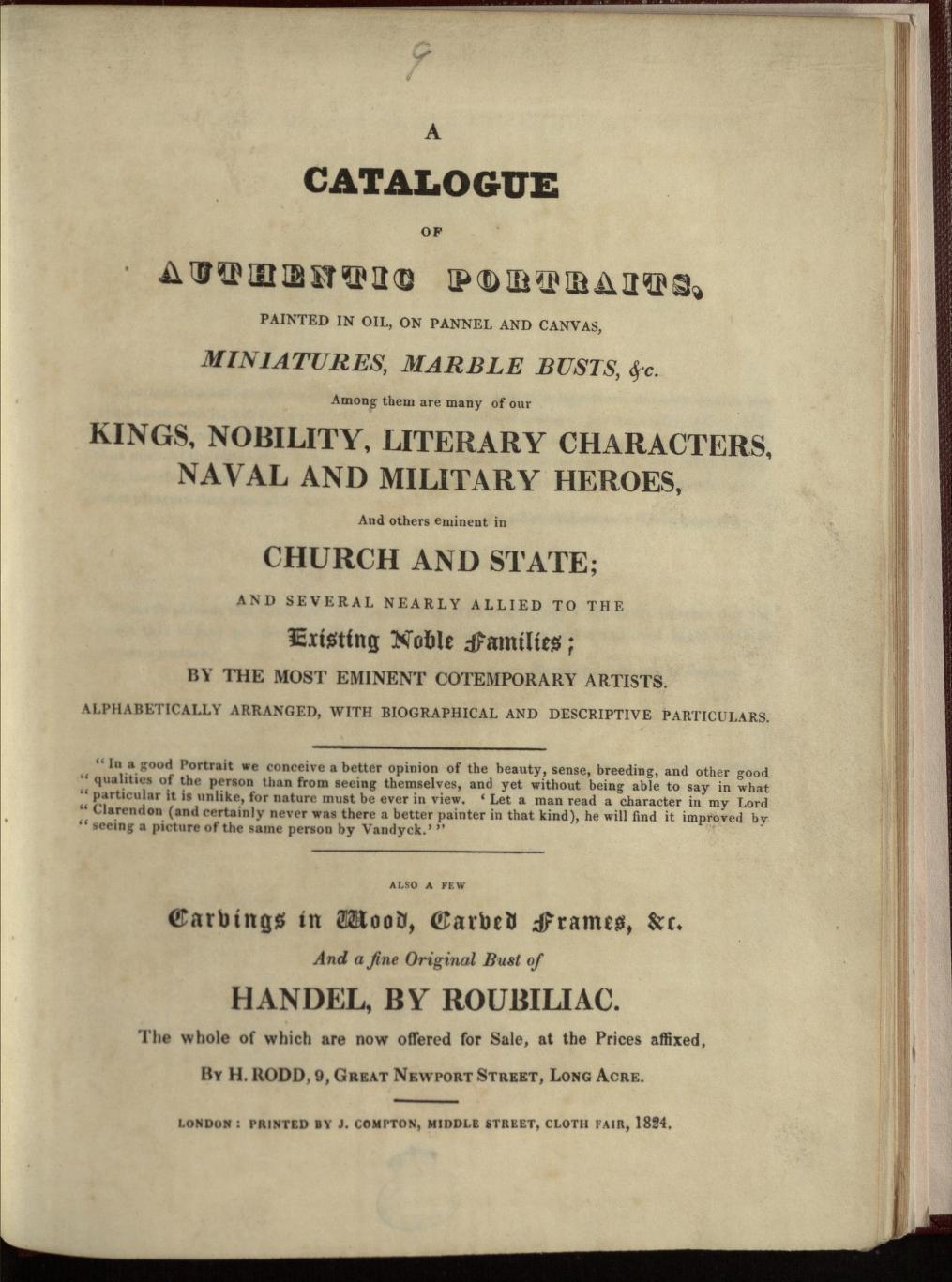 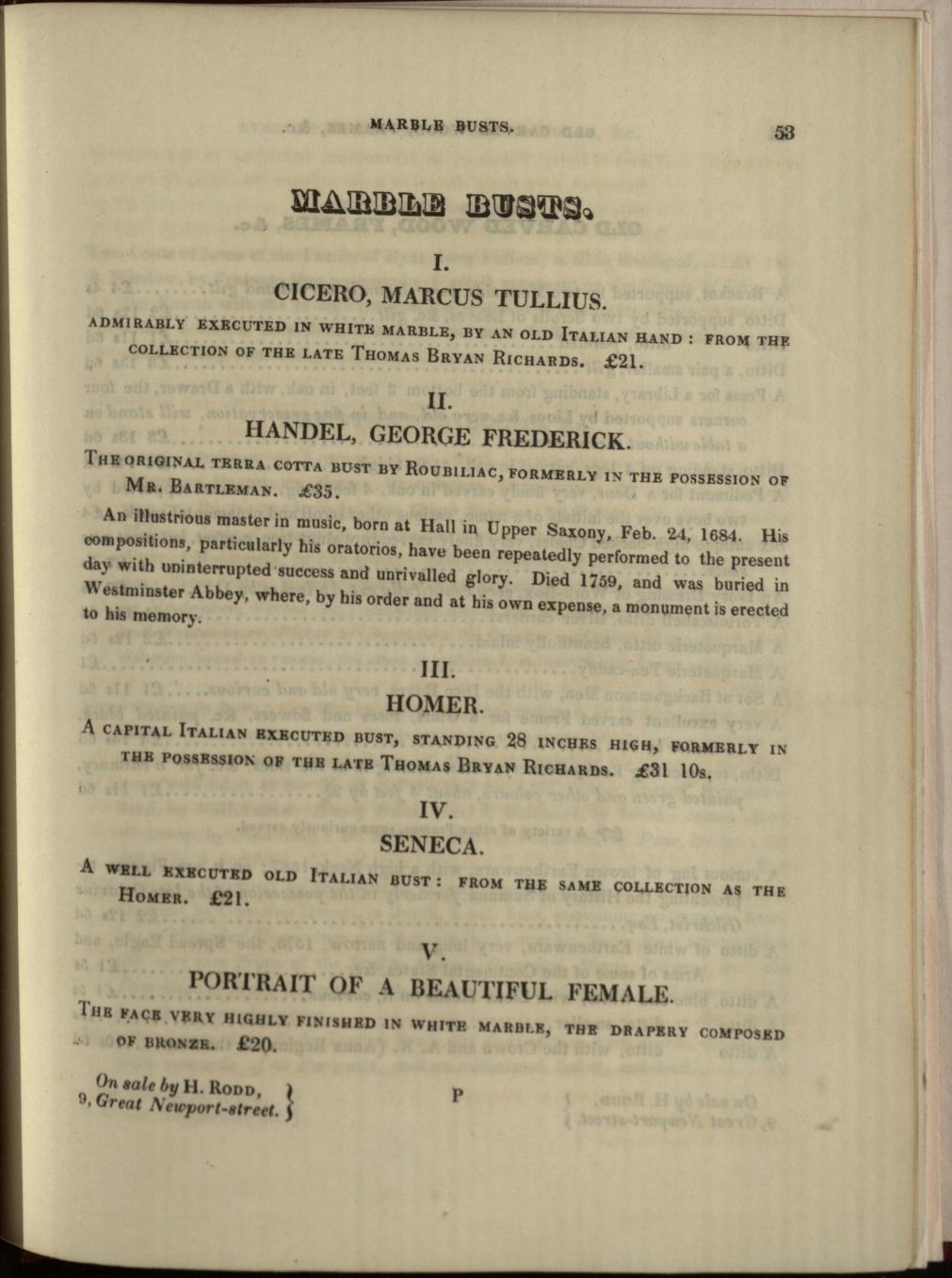 No illustration of the Handel bust but some amusing engravings of the portraits available from Mr Rodd (below). 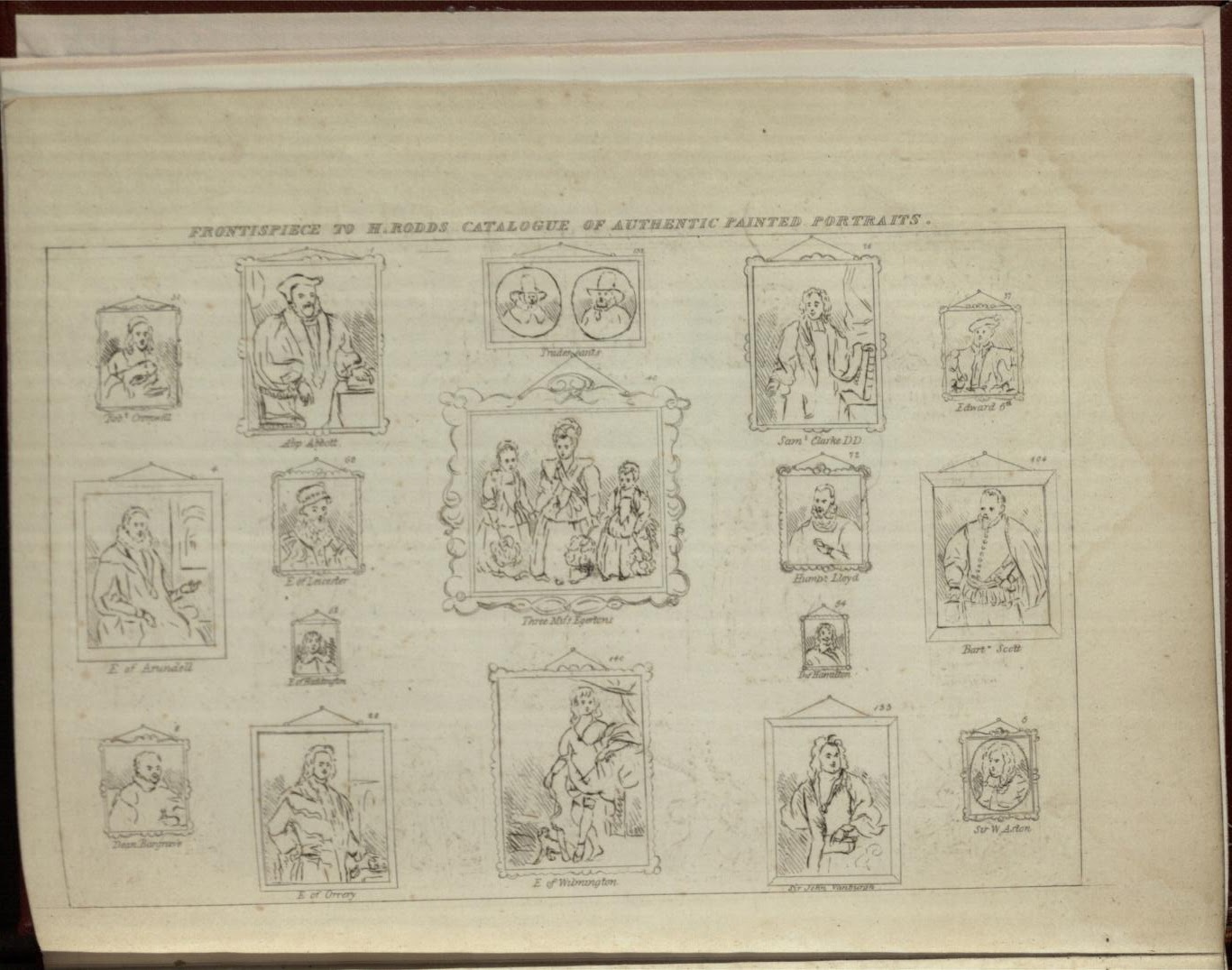 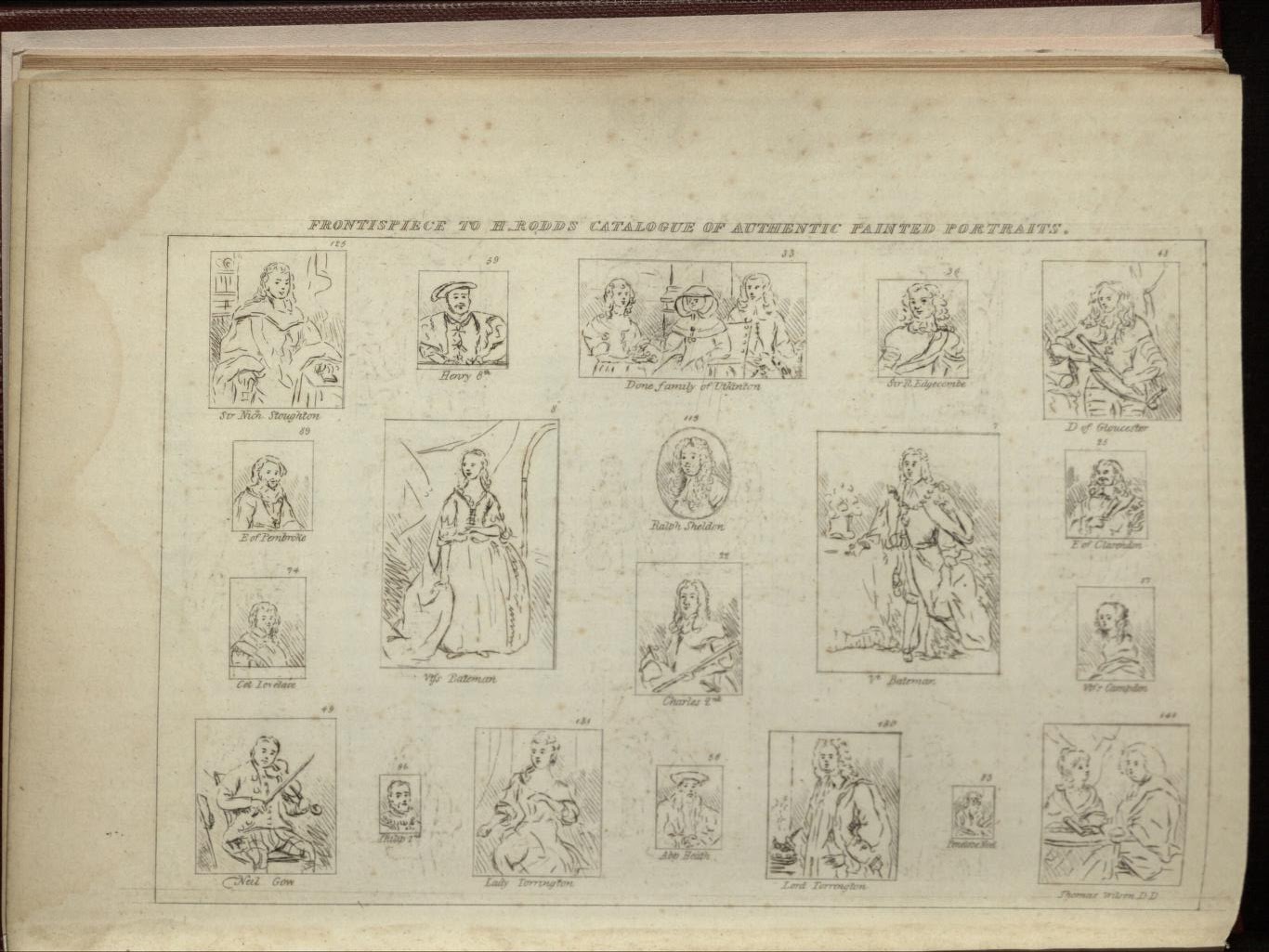 The Rudd Catalogue available online at:

I have taken the liberty and copied and pasted the biographical details of Rodd and the two illustrations below.


This is a fantastic truly excellent well researched resource for anyone interested in thew history of Antique dealers and Antique dealing in the 19th century. 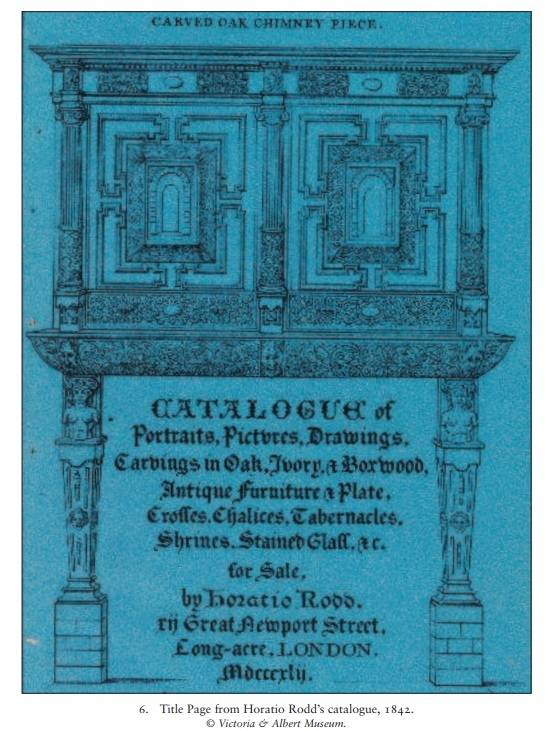 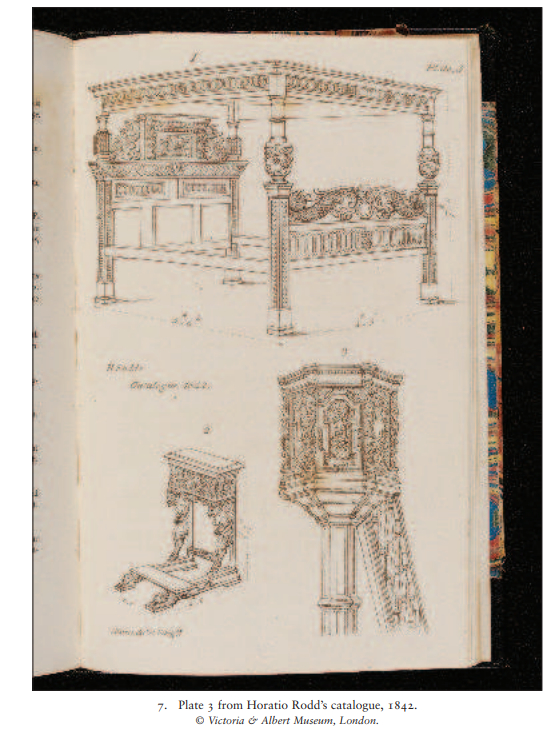 Horatio Rodd was the second son of the well known book seller, writer and poet, Thomas Rodd (1763–1822), who originally traded as ‘imitation gem merchant’ in Sheffield in 1804, later becoming a book seller in London, trading from 2 Great Newport Street from c1809 and in partnership with his son Thomas (1796–1849) as T & H Rodd, booksellers and publishers; listed at 17 Little Newport Street in 1820.

Thomas Rodd retired to the country in 1821 and Mr Sotheby sold the ‘Valuable stock of copper plates with Impressions...property of Mr Rodd’, in December 1822. Thomas Rodd died at Clothall End, near Baldock, Hertfordshire, on November 27th 1822, aged 59.

Following a bankruptcy, Horatio Rodd is also known to have traded as book seller, in partnership with his brother, Thomas Rodd Jnr. Horatio Rodd, of Jermyn Street, Piccadilly, ‘dealer in curiosities’ was declared bankrupt in February 1830 and again in August 1844.

Horatio Rodd was secretary of The Virtuosi Fund (also known as The Dealers in Fine Arts Provident Institution), which was established in 1842 for the assistance of members and their wives and children who ‘had kept shop, showroom, or gallery, principally for the sale of works of art’.

Horatio Rodd is regularly recorded as both buyer and seller of paintings at various London auction
rooms during the period 1824–1840. Rodd also regularly issued catalogues of his stock; in a catalogue dated 1824, issued from his Great Newport Street address, Rodd lists several pieces of ancient oak furniture and other curiosities as well as prints of British portraits and topographical prints of British counties and included ‘ancient stained glass’ and ‘six antique high-backed chairs, very finely carved in walnuttree…£7.7s’. Rodd also published a ‘Catalogue of Painted British Portraits’ in 1824, 1825 and one in 1827, (issued from his 17 Air Street, Piccadilly address), which included paintings priced between 2gns and 60gns, including ‘William Hogarth’s portrait of Lord Lovat’.

An 1842 catalogue included a ‘prie-dieu of the time of Francis Premier…£5.5s’ and an ‘Elizabethan chimneypiece from an old house at Bow, Middlesex… £15.15s’ (figures 6 & 7). The auctioneer George Robins (q.v.) sold the ‘Valuable and Highly interesting Stock of English Portraits...property of Mr H. Rodd’, on 19th July 1849.

Rodd sold ancient objects etc to the collector G. W. Braikenridge (1775–1856) of Broomwell House near Bristol in the 1820s and 1830s (figure 19). Rodd offered Braikenridge a pair of candlesticks in 1834, purchased in conjunction with the dealer John Swaby (q.v.) from the auction sale at Lee Priory, as well as selling Braikenridge the set of six walnut-tree chairs that Rodd included in his 1824 catalogue and a large amount of carved woodwork which Braikenridge installed at Broomwell House
The portrait painter Abraham Wivell in his ‘Supplement to an Inquiry into the history, authenticity & characteristics of the Shakespeare Portraits’ (1827) records that ‘Mr Rodd, a dealer in paintings, has a portrait of Shakespeare, which was done in the year 1700. It is rather small, but an interesting picture; it bears a resemblance to the Chandos portrait...’ ‘Rodd, the bookseller of Little Newport Street’ is recorded as the purchaser of the Chandos Portrait of Shakespeare at the Stowe auction sale in 1848, (355gns) acting as the agent for Lord Ellesmere.

The dealer John Coleman Isaac recorded that he sold Rodd a pair of enamel candlesticks
prior to 1841.

Abraham Wivell, A Supplement to an inquiry into the history, authenticity & characteristics of the Shakespeare Portraits (1827),p. 29;

Horatio Rodd, Remarks on the Chandos portrait of Shakespeare, (1849);


For a brief history of the Bryants and Vauxhall Gardens see -

Posted by David Bridgwater at 11:23