The so called Handel Life Mask

Photographic Comparisons of the so called Life Mask with other versions of the Plaster Busts of Handel and some notes pertaining.
This blog entry edited and updated 6 Oct 2020.
The earliest mention I can find of a life (or death mask) appeared in the weekly magazine The Mirror of 19 July 1834.

Much has been made of this reference and other versions of the "life masks", particularly by David Wilson in the British Arts Journal, Vol. X no. 1; David Coke in the Sculpture Journal, Vol.16.2; and at the Ruth Rendall unveiling at the Handel House at 25 Brook Street, Mayfair, London in 2009 and then in subsequent Handel House publications.

My own belief is that none of these authors have had the opportunity to inspect the other versions of the Roubiliac Handel busts (the Grimsthorpe terracotta or the Gloucester Cathedral plaster) at close quarters and to make comparisons and that the so called "Life mask" is a cast of a version of the bareheaded and late generation and much over painted Roubiliac plaster bust of Handel.
They also appear to have been unaware of the marble version of this bust (by Heaven Inspired) sold by Sotheby's Lot 179, 9 July 2015.
see - http://bathartandarchitecture.blogspot.com/2015/06/a-marble-bust-of-handel-by-heaven.html
http://www.sothebys.com/en/auctions/ecatalogue/2015/old-master-sculpture-works-art-l15231/lot.179.html
It is a shame that these authors have made assertions which havn't been verified and that the facts have become skewed and then repeated by a series of "Chinese whispers".
Given that Malcolm Baker must have been aware of the marble version of this bust in an article by David Wilson, ''By Heaven Inspired': A marble bust of Handel by Roubiliac rediscovered', The British Art Journal, vol. X, no. 1, 2009, pp. 14-29. it is a shame that no mention of it appeared in his work "The Marble Index" published in 2014. 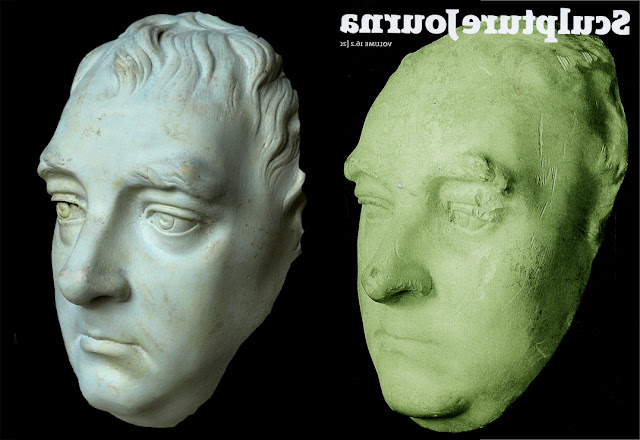 The three quarter life size plaster bust of Handel now with the Handel Haus Museum in Halle, Germany on the left compared with a plaster mask.
For much more on this recently discovered and unpublished plaster bust of Handel see -
http://bathartandarchitecture.blogspot.com/2014/01/asummary-of-researches-into-bust-of.html
For a slightly different version of this plaster bust of this bust but showing the waistcoat embroidered and a turned socle with eared support ( much used by Shout of Holorn see -
http://bathartandarchitecture.blogspot.com/2015/03/
The illustration of the mask on the cover of the Sculpture Journal above was reproduced the wrong way around. 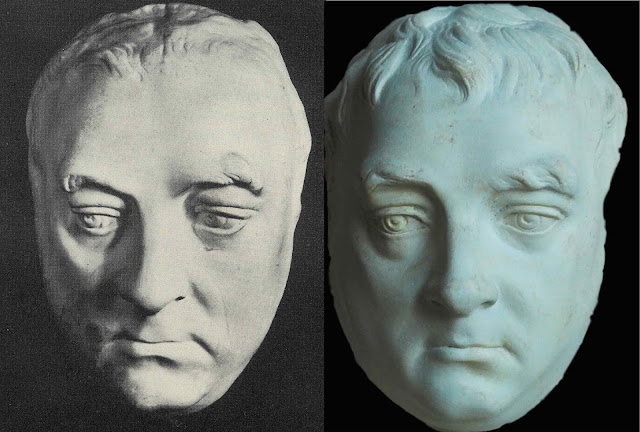 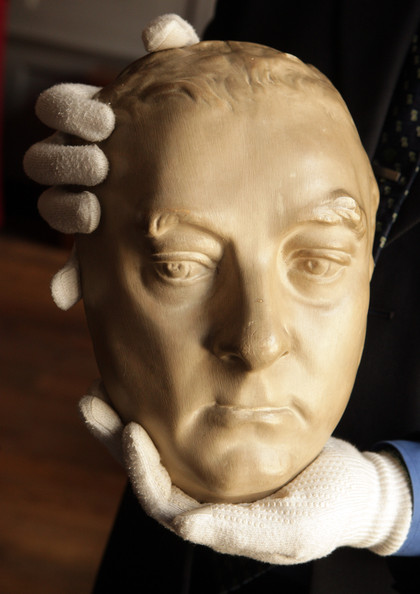 Photograph of the so called life mask of Handel taken at the Handel House Museum in London in 2009. 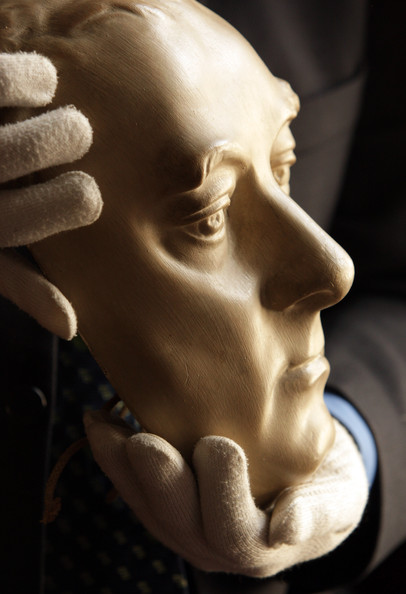 Above the Gloucester Cathedral Plaster bust of Handel, on the left compared with the so called life mask. This to me is obvious proof that the "life mask" has been taken from a much over painted plaster cast of the Roubiliac bust of Handel. It is plain to see that the "life mask" has lost the definition that is easily discernable on the Gloucester Cathedral Plaster.
Comparison of the eyes is instructive.
It should also be noted that the prominent mole on his right hand cheek (proper) clearly visible in the Foundling Museum terracotta and the 1738 engraving by Houbraken is missing!
If it were a life mask the eyes hair and eyebrows would have to have been reworked after a mould was taken of the sitters face
Were it really a life mask, even with the obvious over painting, which this mask has undergone, the detailing of the facial features would be much clearer. The detail of the hair on these two faces is obviously very close as are the eyes and eyebrows.
There would also be deterioration of the plaster piece mould after each pull. It is difficult to be sure how many times a piece mould could be used - probably less than twenty.
Since the first mention of any life or death mask was in the Mirror of 19 July 1834 it is my belief that this mask was produced deliberately to deceive the gullible with the intention of parting them with their money - this seems to have worked up until now, that is if anybody actually reads this.
I would welcome any comments. 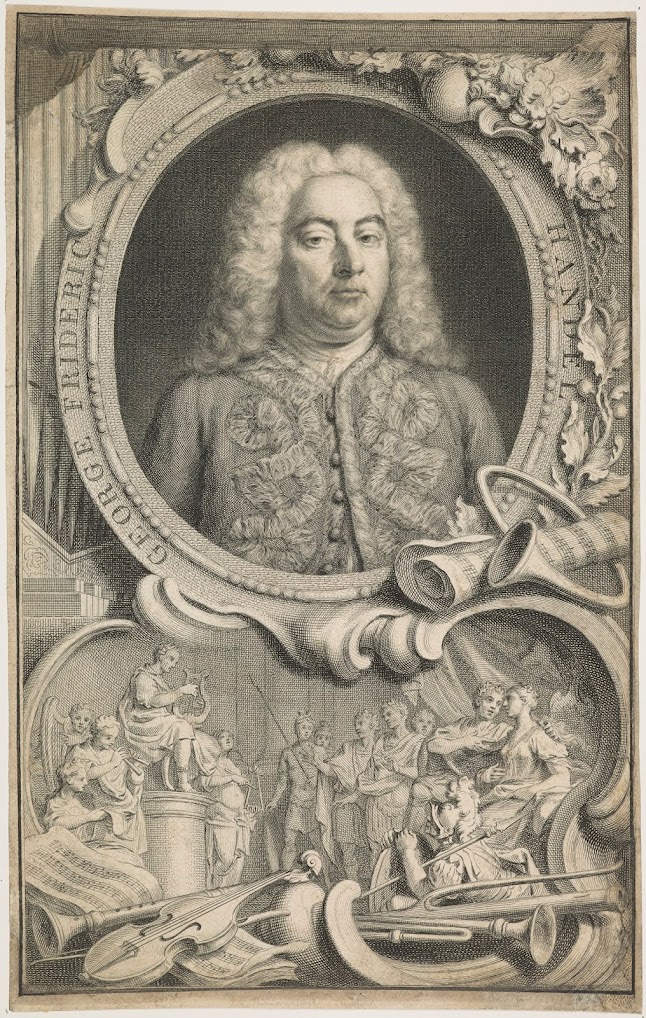 George Frederick Handel
Showing the mole on his right proper cheek - this is also visible on the Foundling Hospital terRoubiliac terracotta of Handel.
Line Engraving
by Jacobus Houbraken, 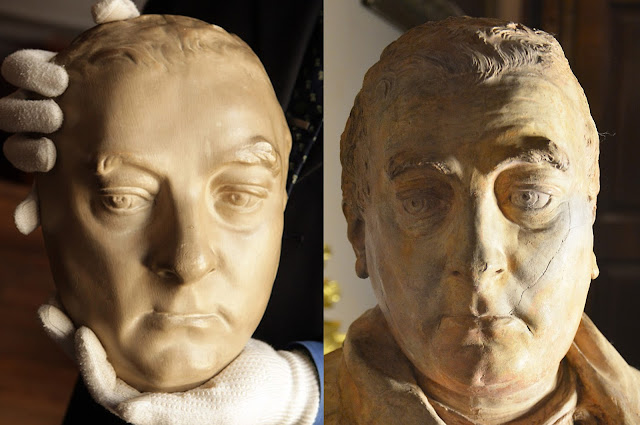 Above The Handel House Mask compared with the Grimsthorpe terracotta. 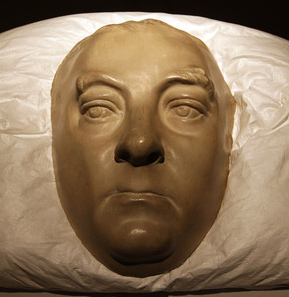 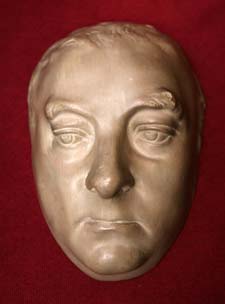 Another Photograph of the Handel House Mask. 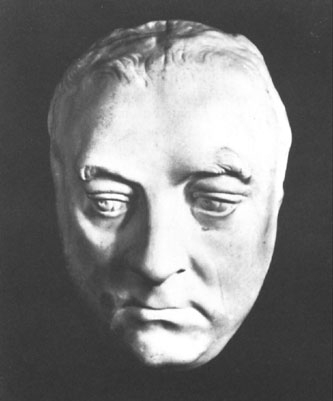 Photograph from the National Portrait Gallery of the so called life mask of Handel as used in the Exhibition catalogue Handel, A Celebration of his life and Times, 1685 -1759, ed. Jacob Simon. NPG, 1986. 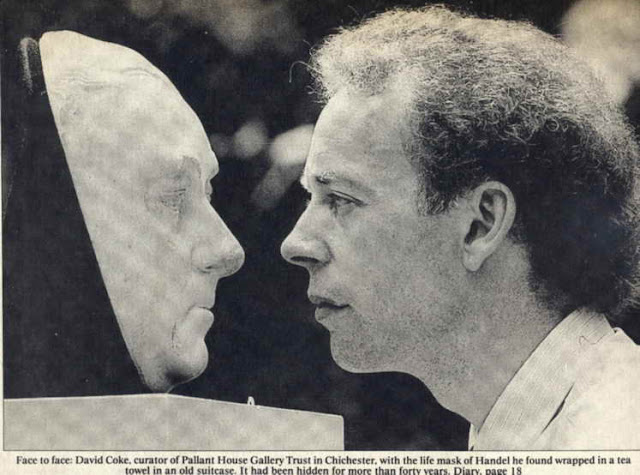 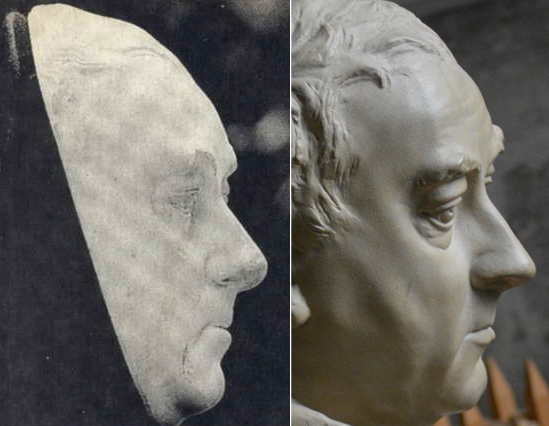 The David Coke life mask compared with the Gloucester Cathedral.
_________________
For a detailed look at the Gloucester Cathdral plaster bust of Handel see my blog post -
http://bathartandarchitecture.blogspot.com/2015/03/more-on-roubiliac-busts-of-handel.html
For an in depth look at the Roubiliac terracotta of Handel at Grimsthorpe see -
http://bathartandarchitecture.blogspot.com/2015/06/comparison-photographs-of-sothebys.html
For a set of photographs at Getty images of the so called life mask at the Handel House Museum, Brook Street, London with a laughable pitch to make one purchase these expensive photographs see -
https://www.gettyimages.co.uk/detail/news-photo/life-mask-of-george-frideric-handel-lies-on-display-in-the-news-photo/85833852
For the marble version of these busts see -
http://bathartandarchitecture.blogspot.com/2015/06/a-marble-bust-of-handel-by-heaven.html
Possibly this marble bust is the ‘remarkable fine bust of [Handel], exquisitely modell’d by Roubiliac’ in a sale of 1766.
Possibly lot 35 on the second day (21 February) of the John Blackwood sale at Christie’s in 1778, ‘Roubiliac, marble busto of Handel, on a pedestal’.
In the Collection of Alfred Morrison (1821-97), at Fonthill House, Wiltshire, and 16 Carlton House Terrace, London, from c. 1860- 1897;
By descent to his widow, 16 Carlton House Terrace, London;

Prior to its sale at Christie's in 1900, the present bust was recorded in Morrison's collection in the 1890 Handel entry in the Dictionary of National Biography, there described as being by Roubiliac; the attribution is likely to have been given by the then Director of the National Portrait Gallery, Sir George Scharf, who was very familiar with Roubiliac's work (info from Sotheby's catalogue.

Early 21st Century -rediscovered in Belgium by a London dealer. 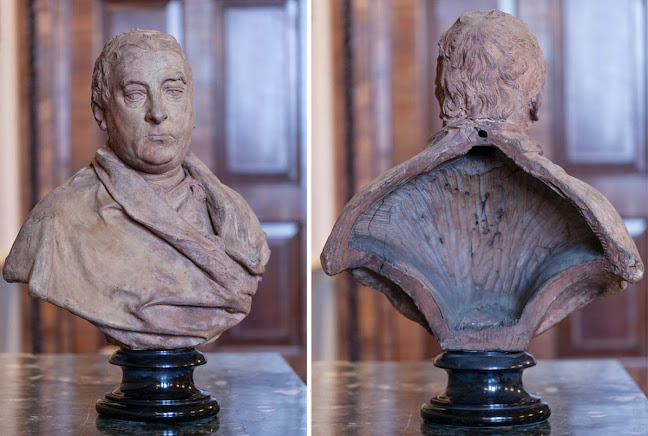 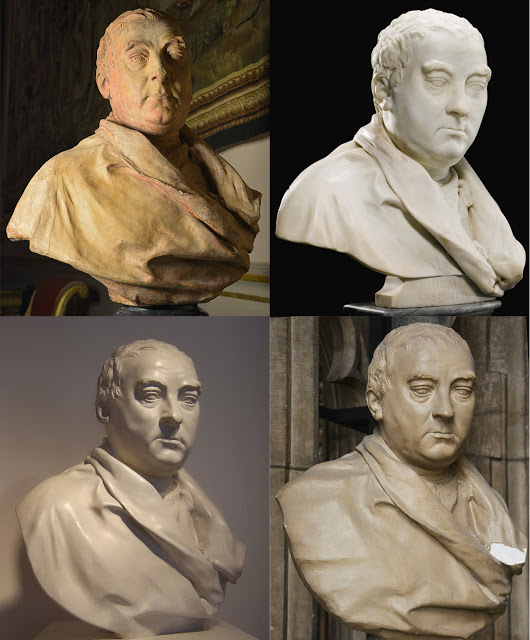