The Gloucester Cathedral Plaster bust of Handel by Roubiliac

The Plaster Bust of Handel at Gloucester Cathedral
More on the Roubiliac Busts of Handel.


It has been known since the 1980's that a life size plaster bust of Handel existed - stored away in Gloucester Cathedral. There is a file on it in the Heinz Archives of the National portrait gallery dated 1986. 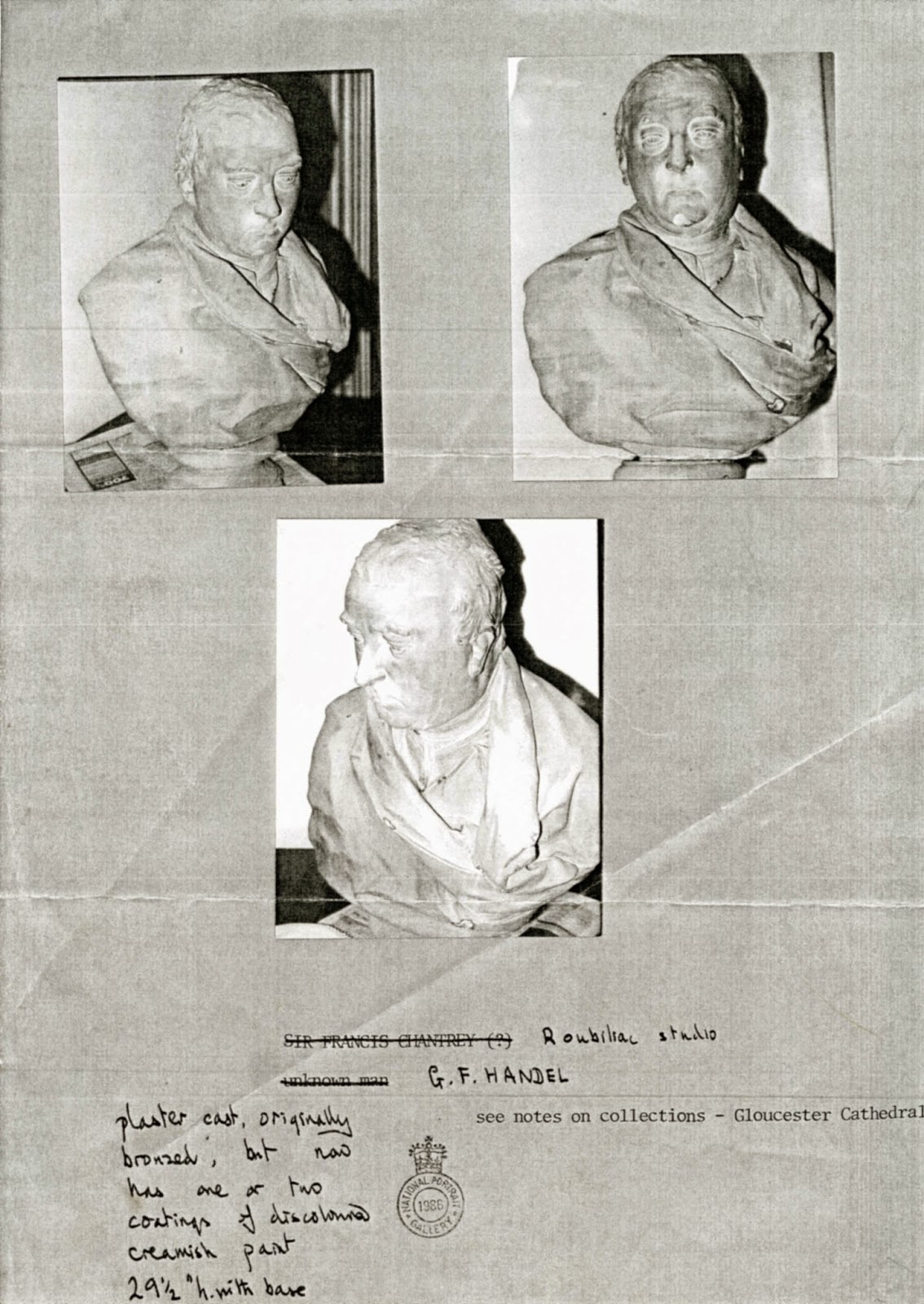 I had foolishly assumed with the publication of the Marble Index by Malcolm Baker in February of this year, that we would see the definitive researches into the subject of the Roubiliac busts of Handel - I was wrong.

When I contacted Christopher Jeens, the Archivist at the cathedral in December 2014, it appeared that nobody at the cathedral knew where the bust was located, or even that it existed. It seems to have been locked away since the 80's.

Shortly afterwards Chris Jeens was able to locate it in the Bridge Chapel by the Whispering Gallery, above the nave of the Cathedral and I was invited to visit on 5th of January and photograph it in the chapel.

This wonderful bust was slightly the worse for wear - it had suffered minor damage to the clothing (see following photographs) and several coats of paint but fortunately all the facial features remained intact. 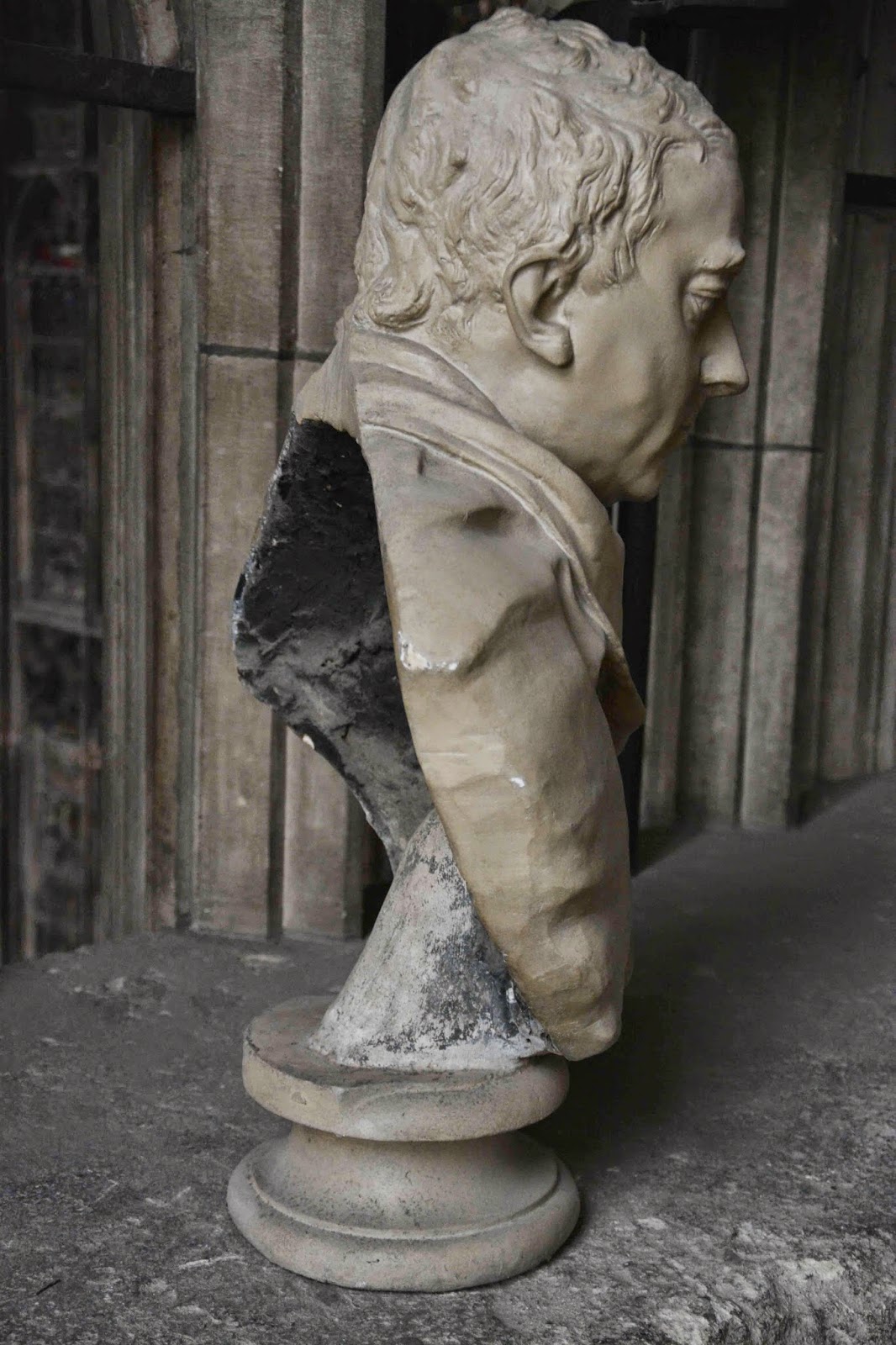 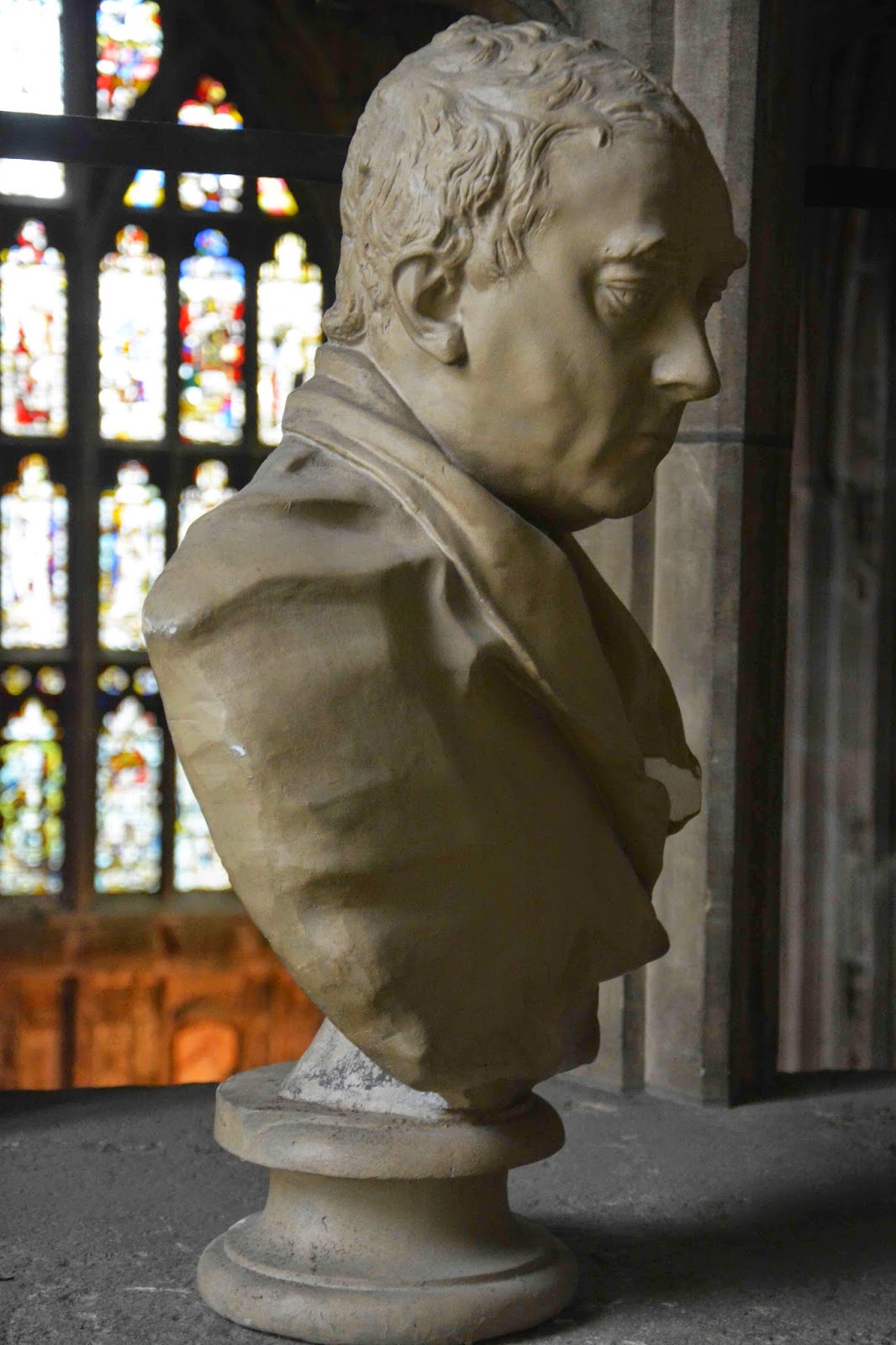 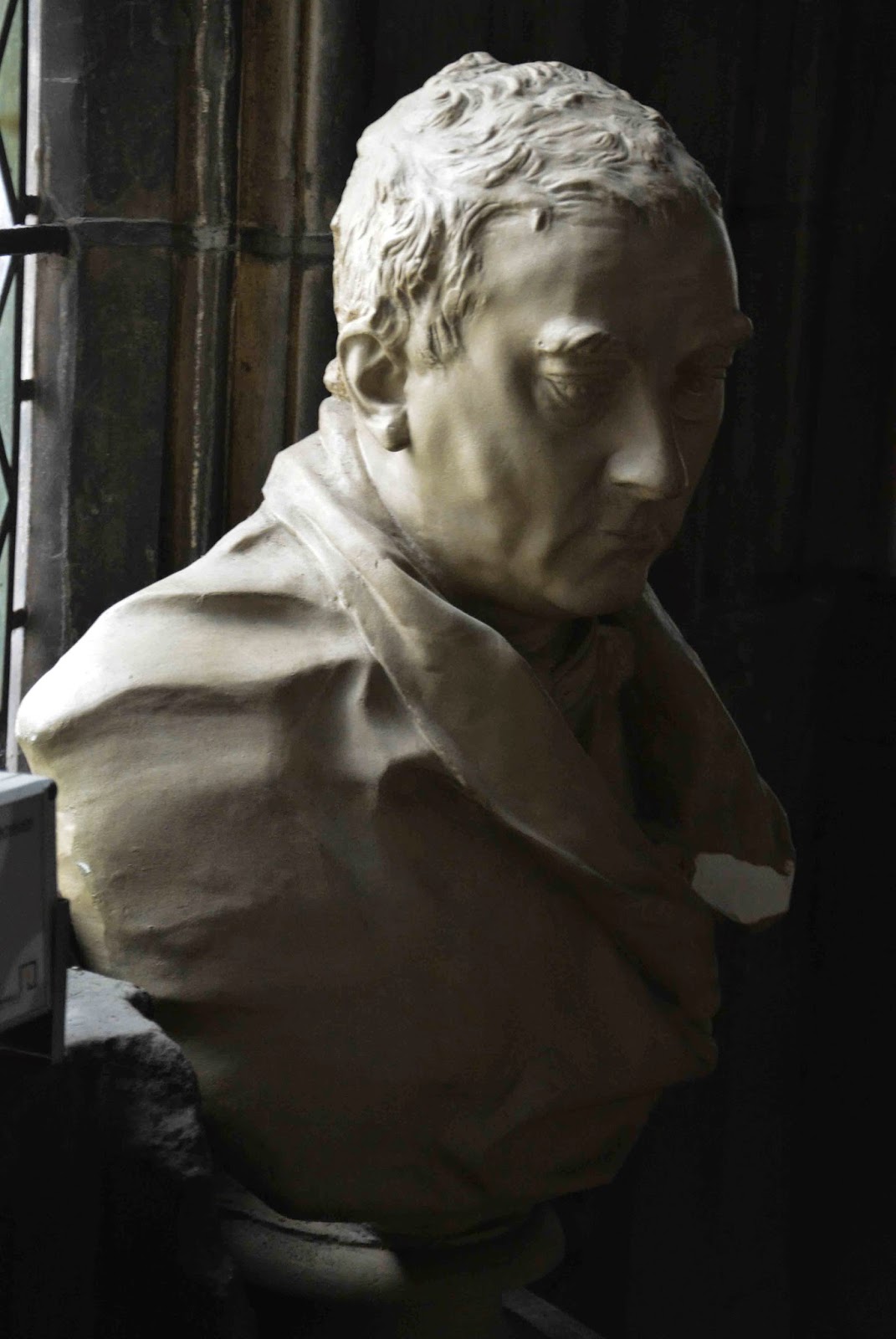 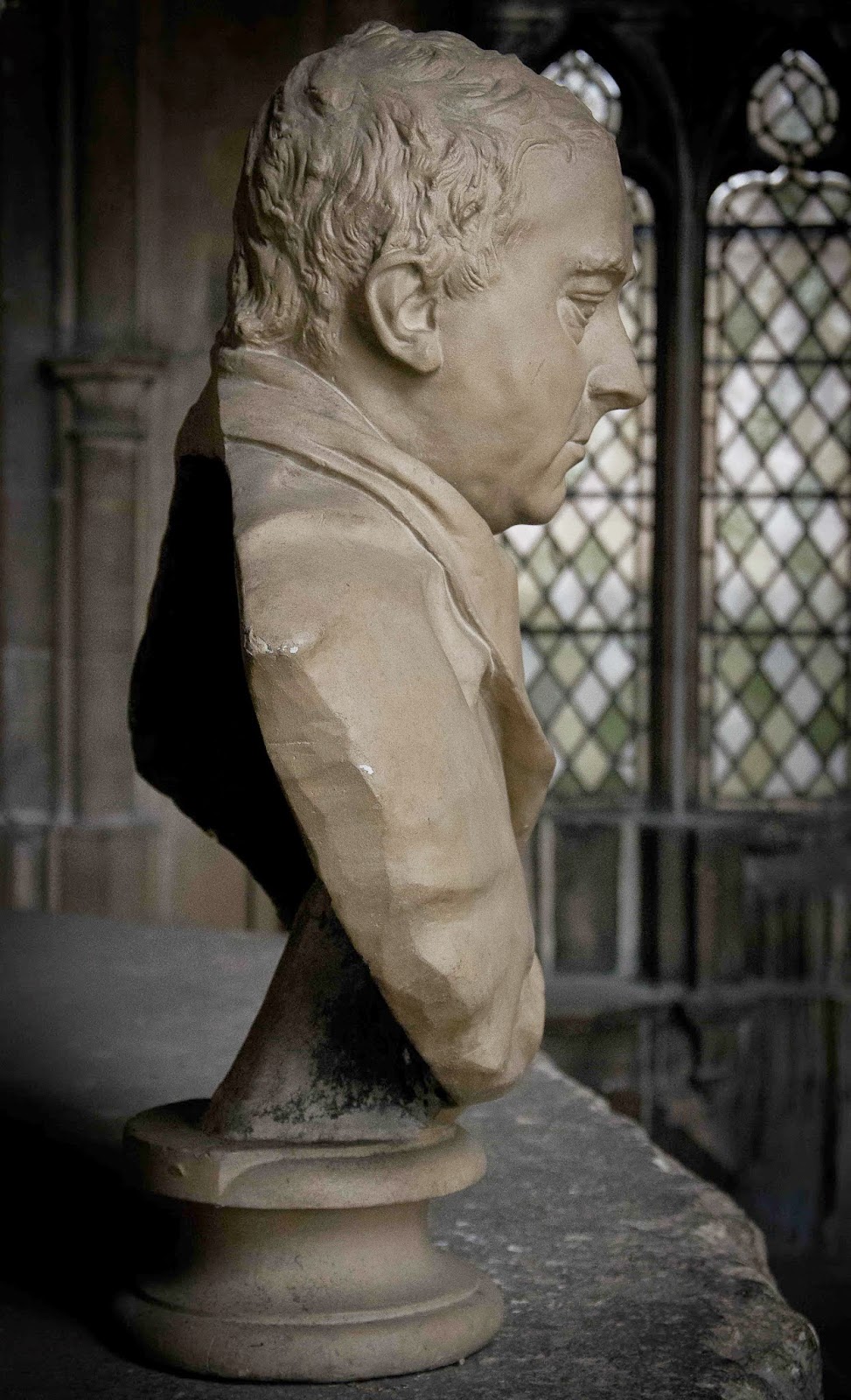 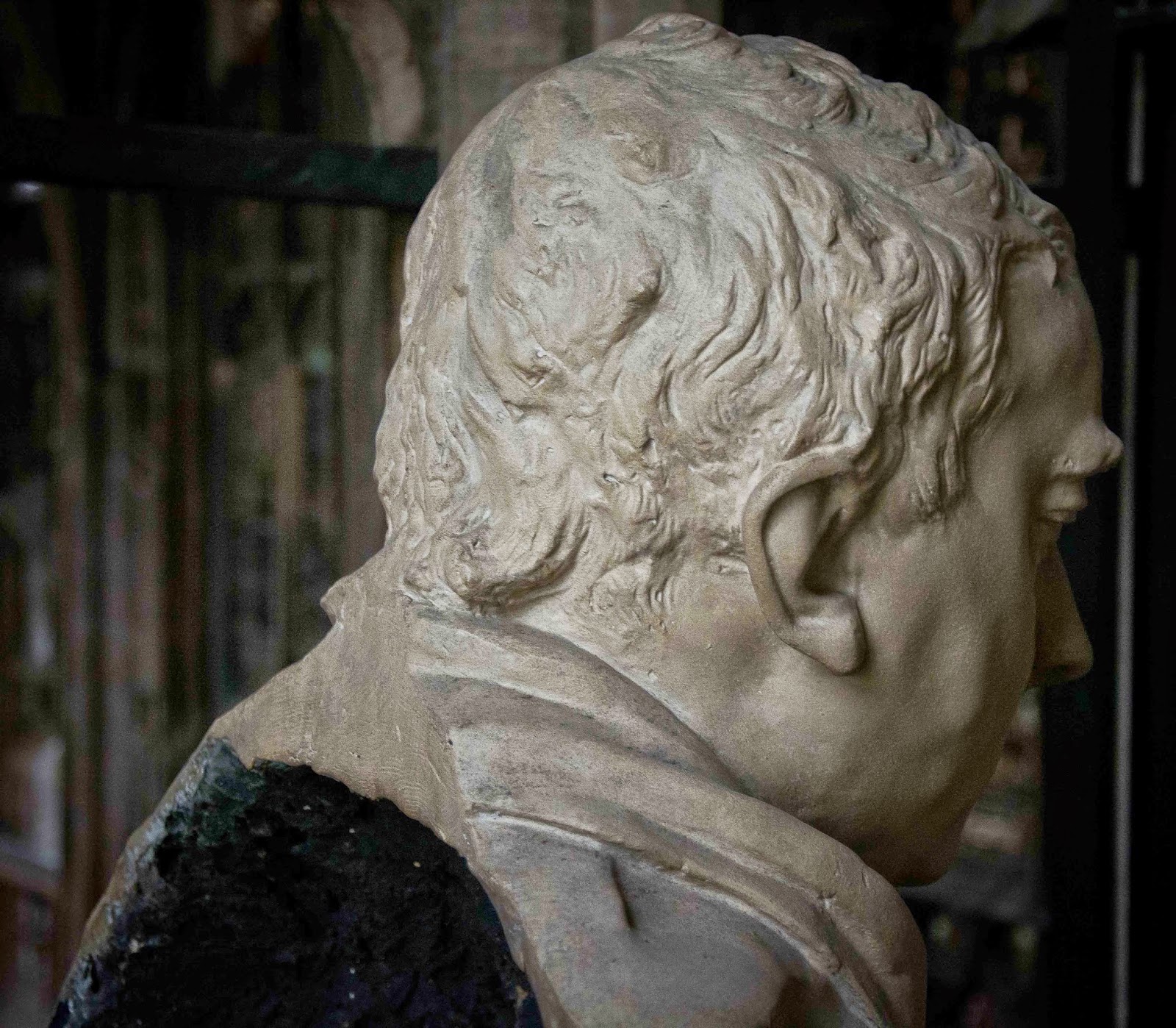 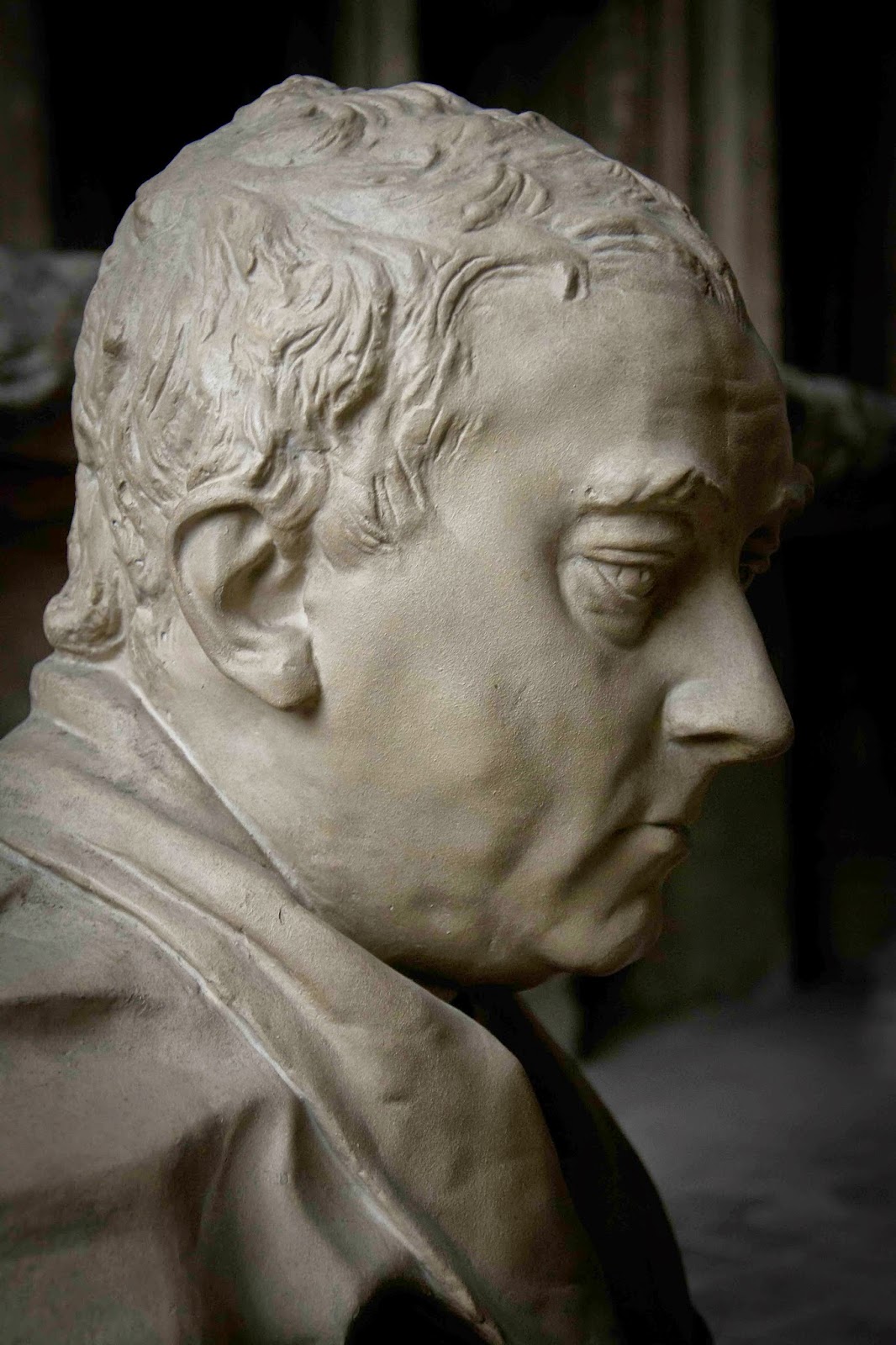 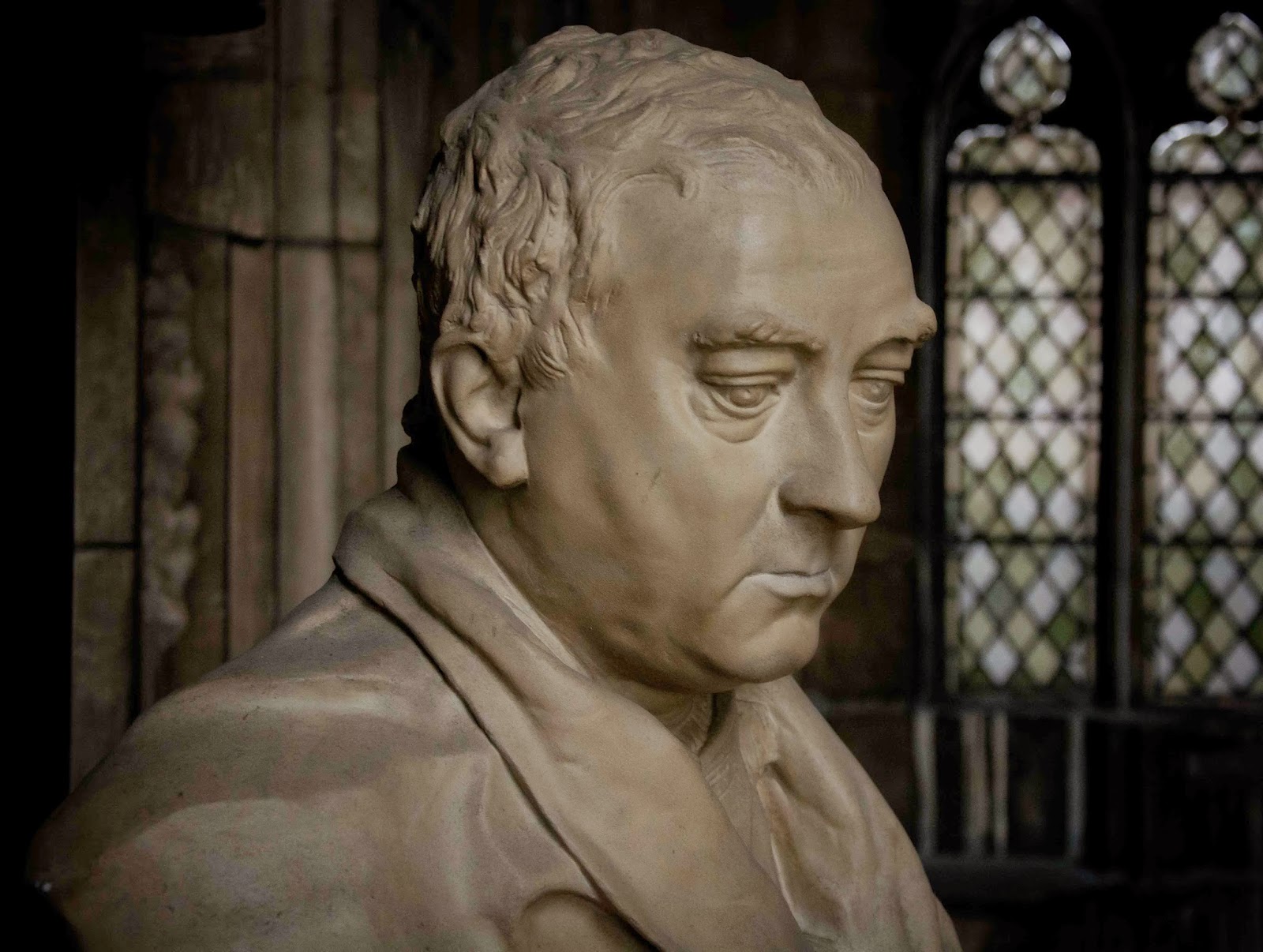 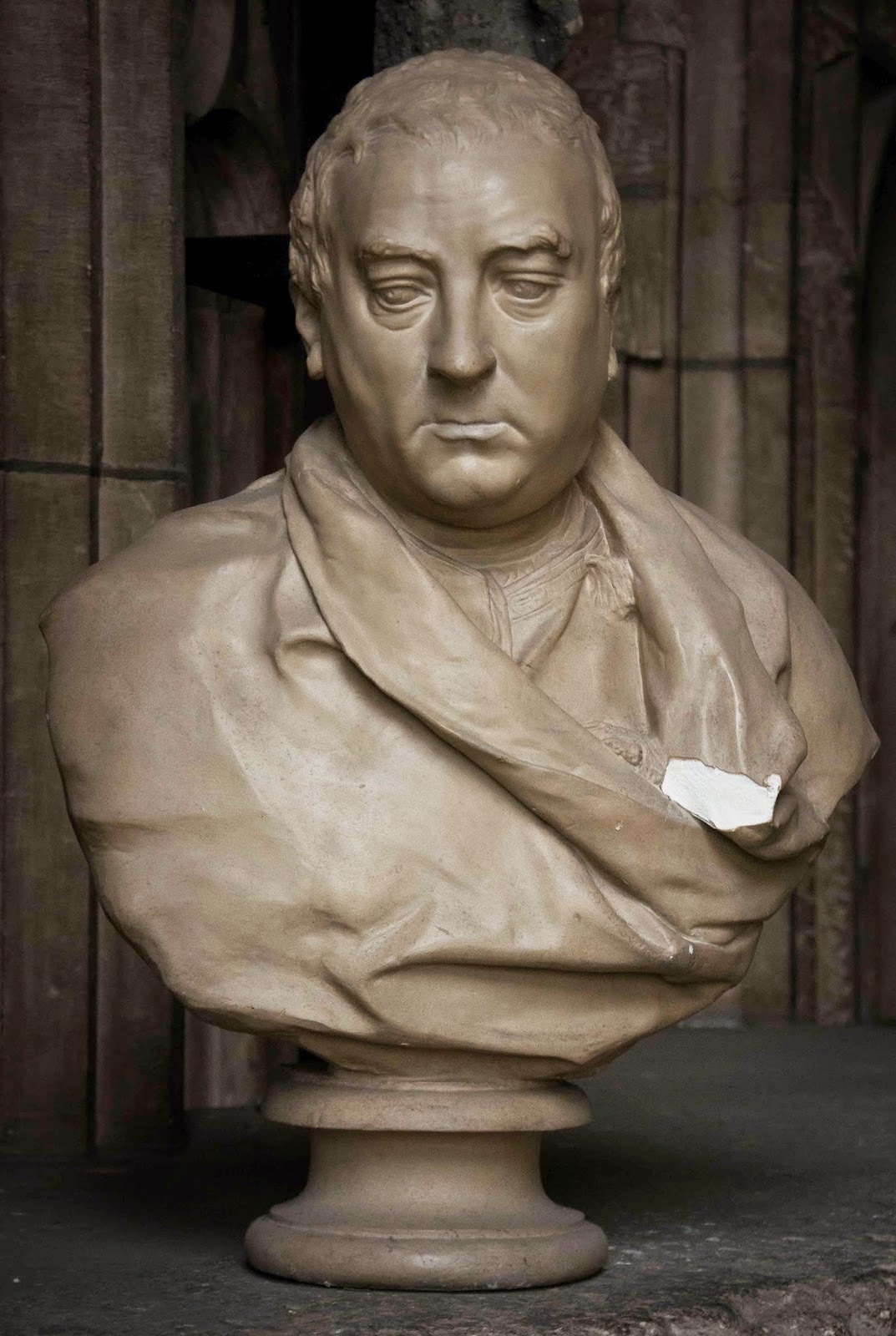 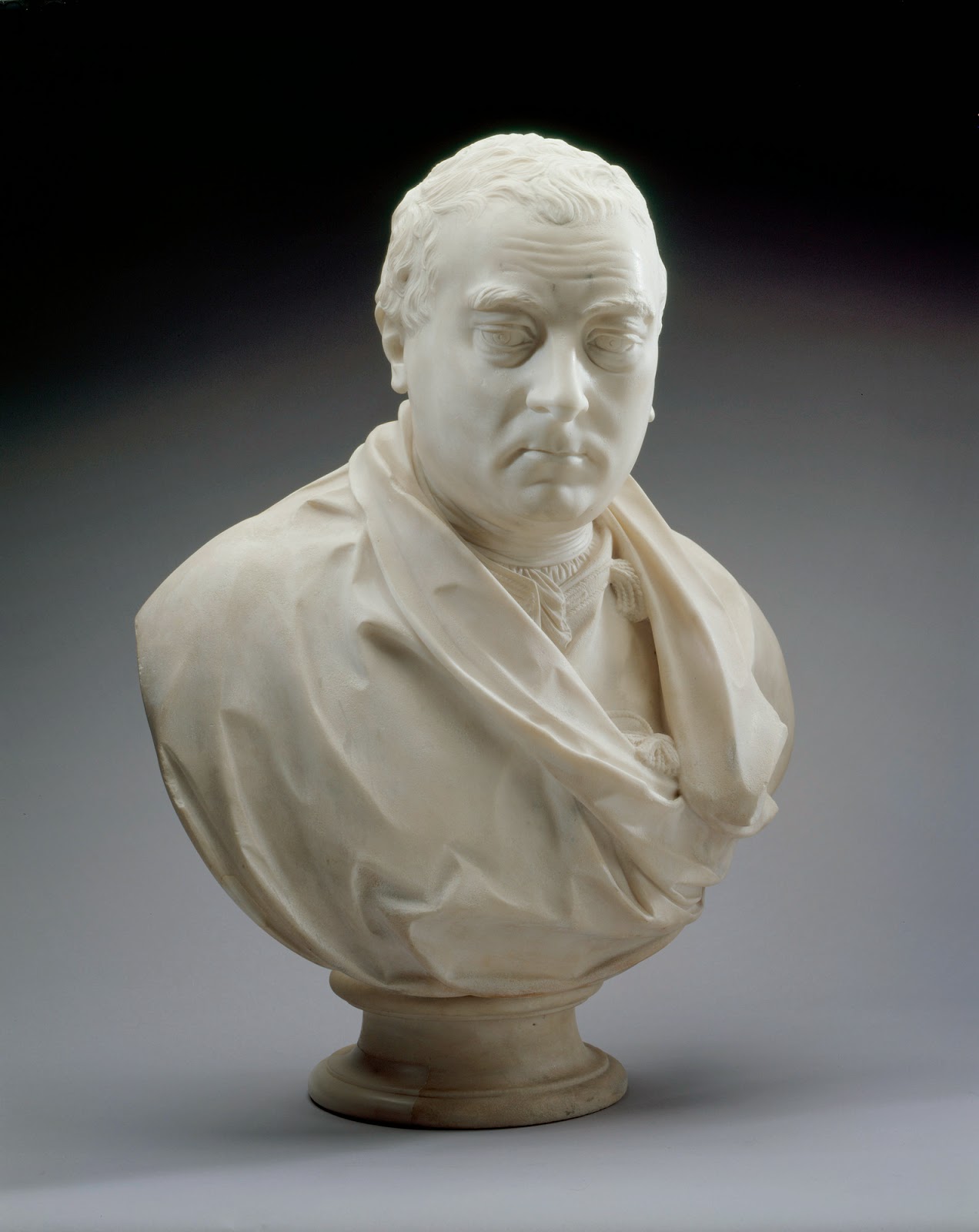 Marble bust of Handel in the Royal Collection. 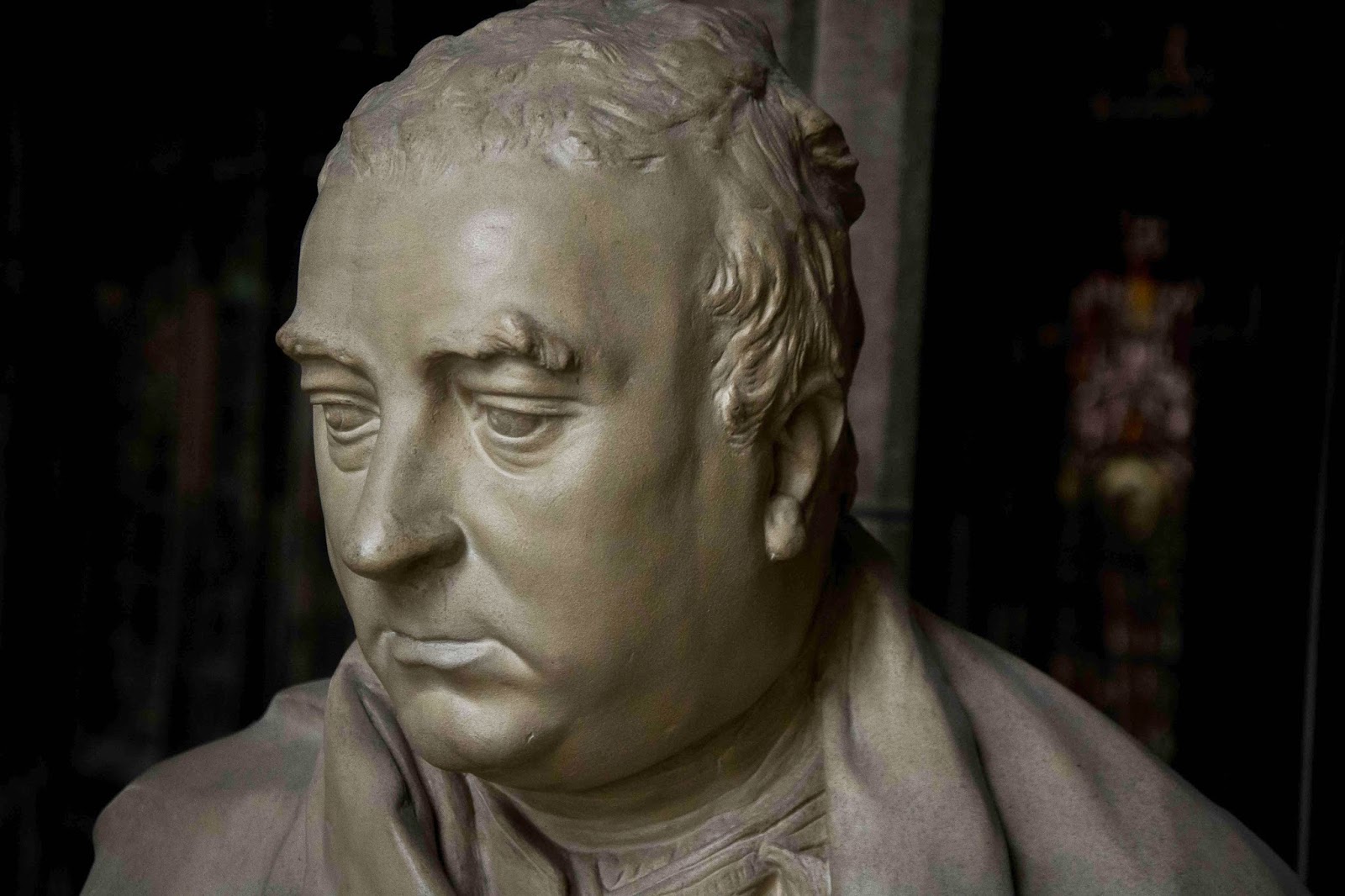 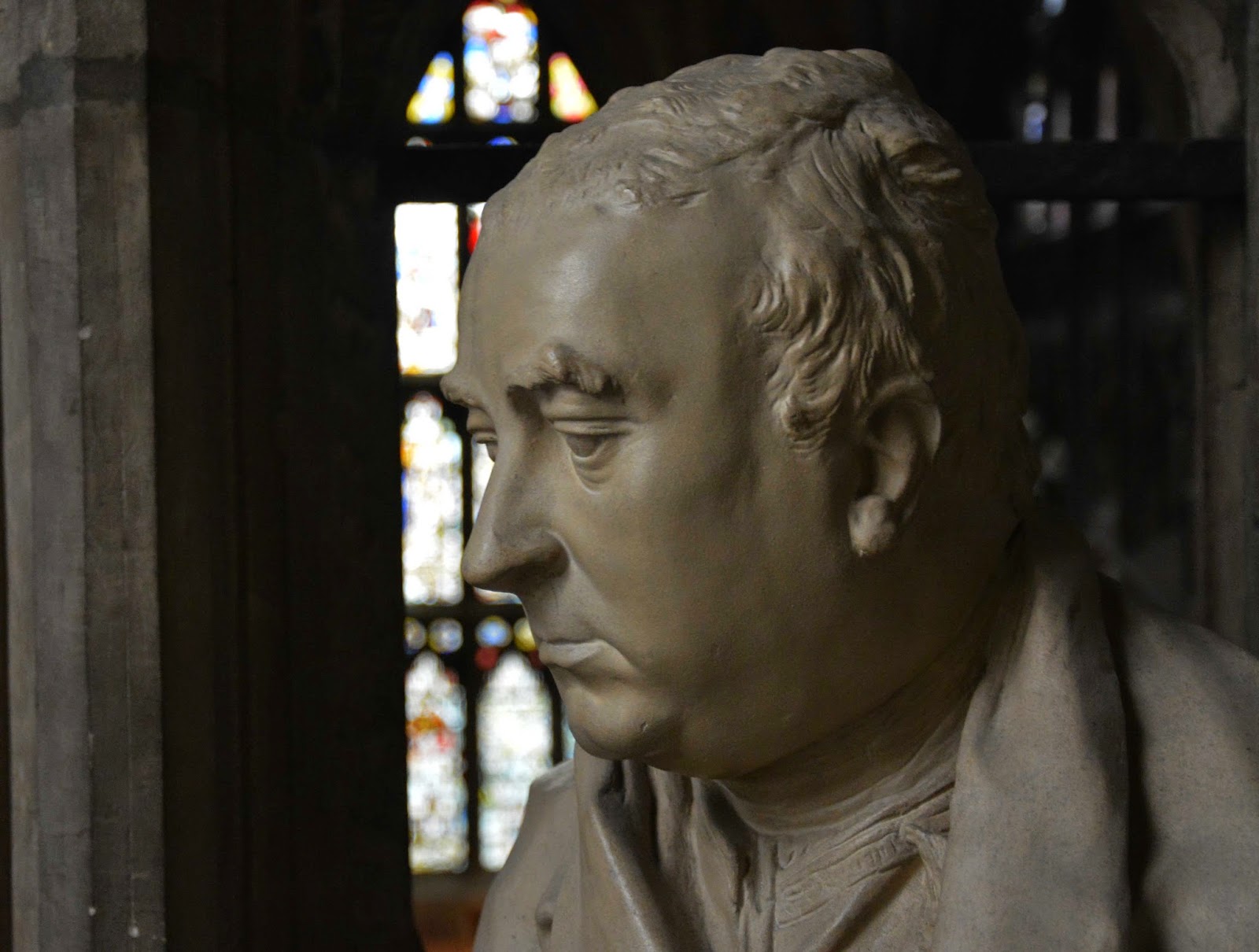 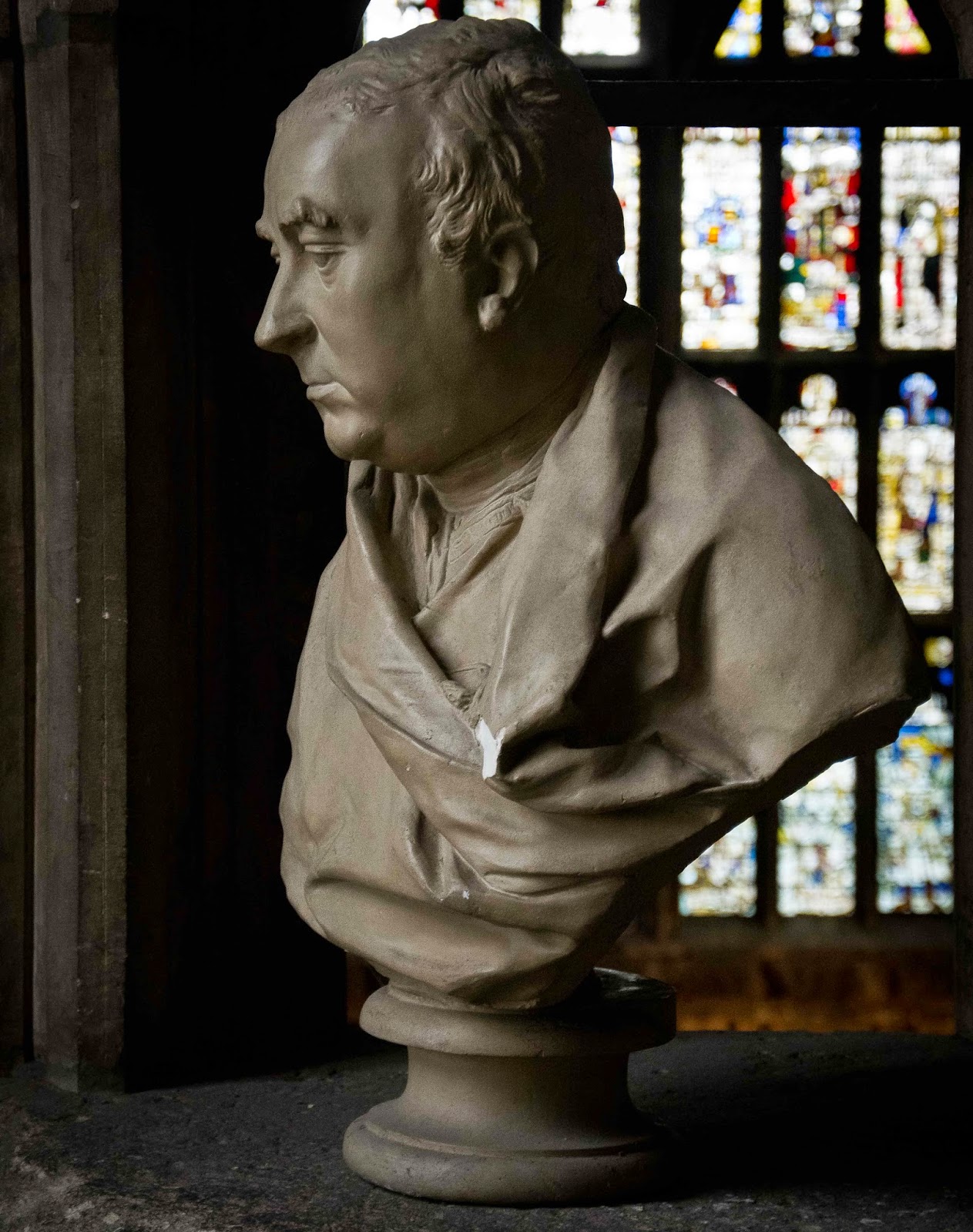 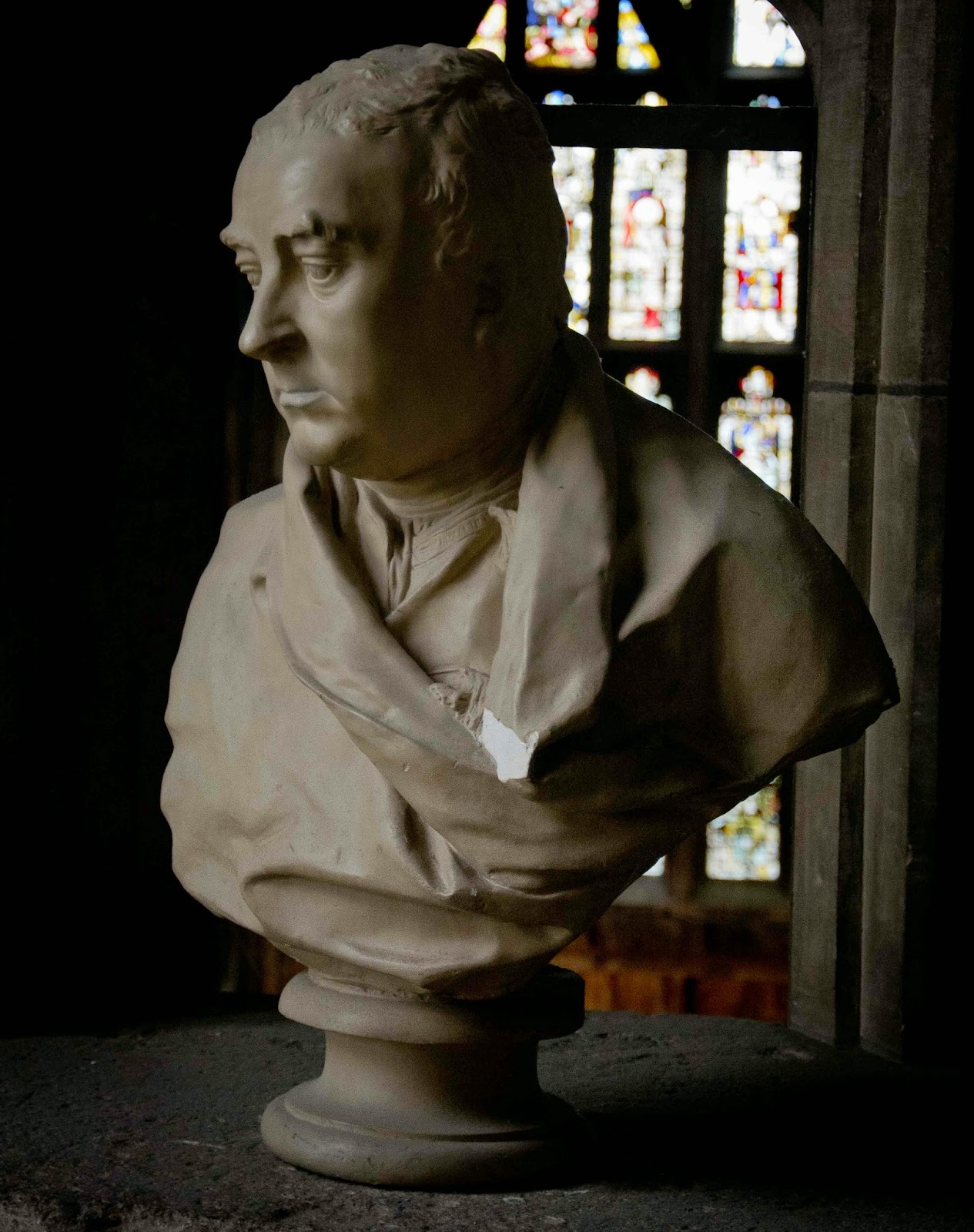 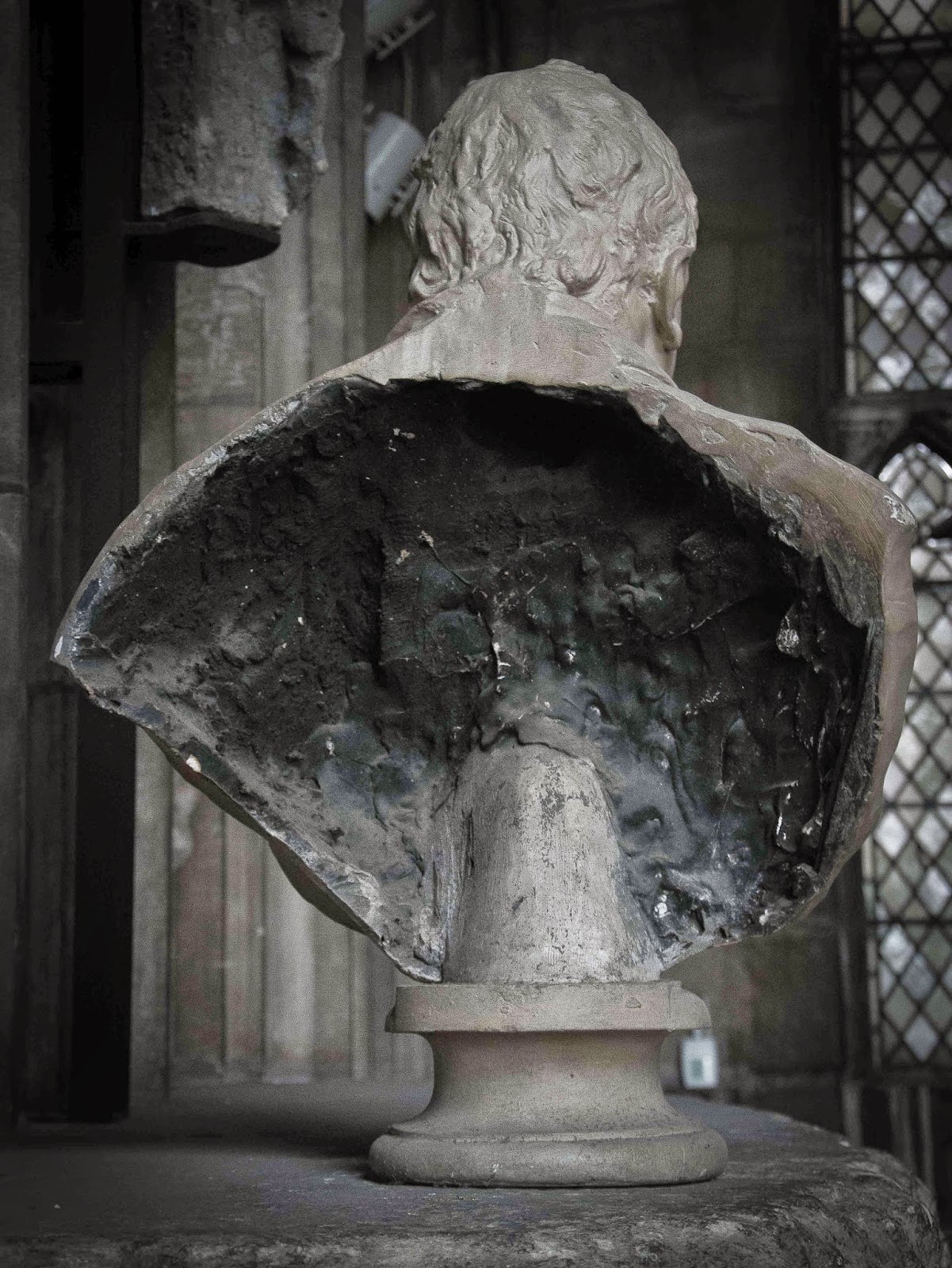 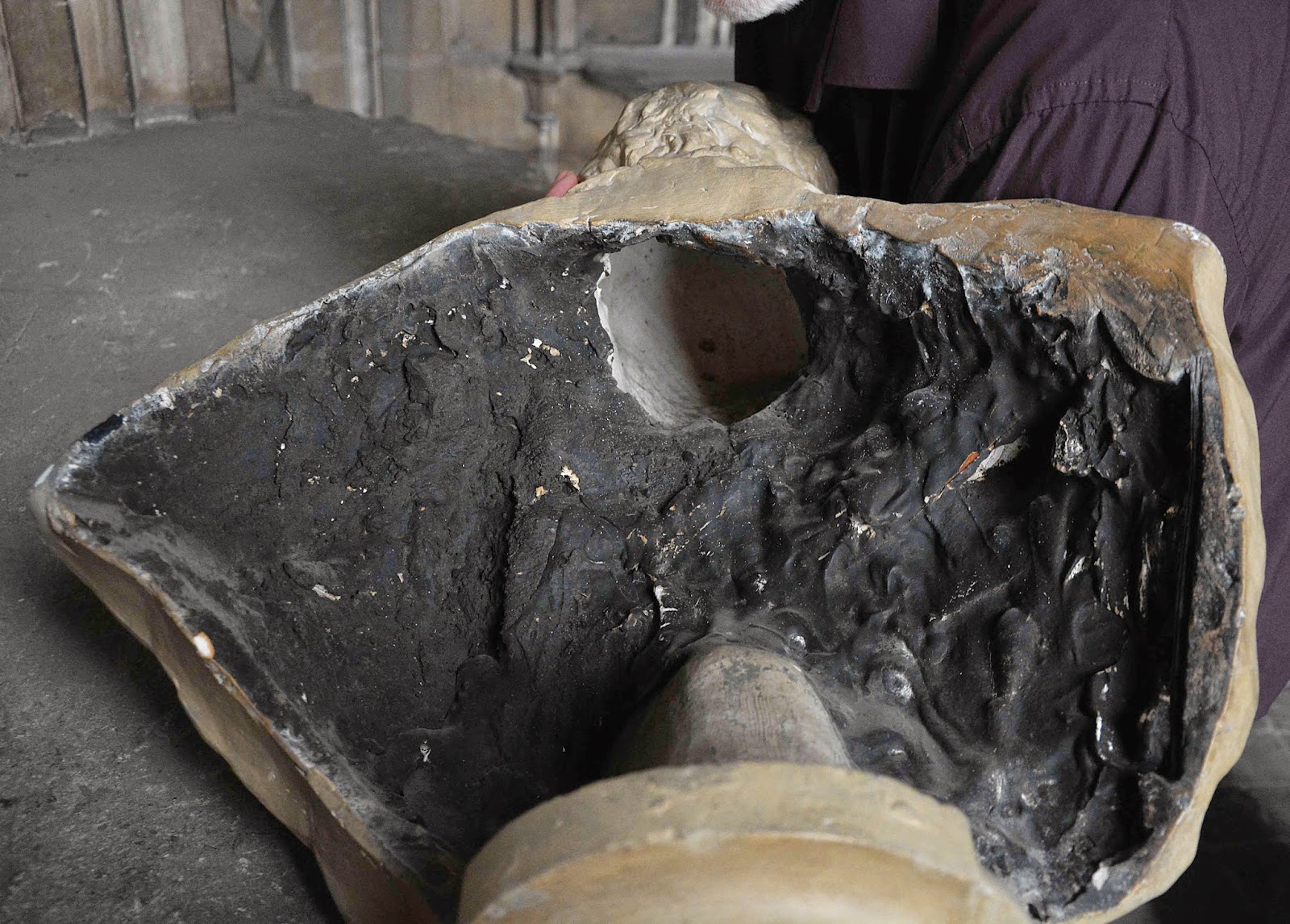 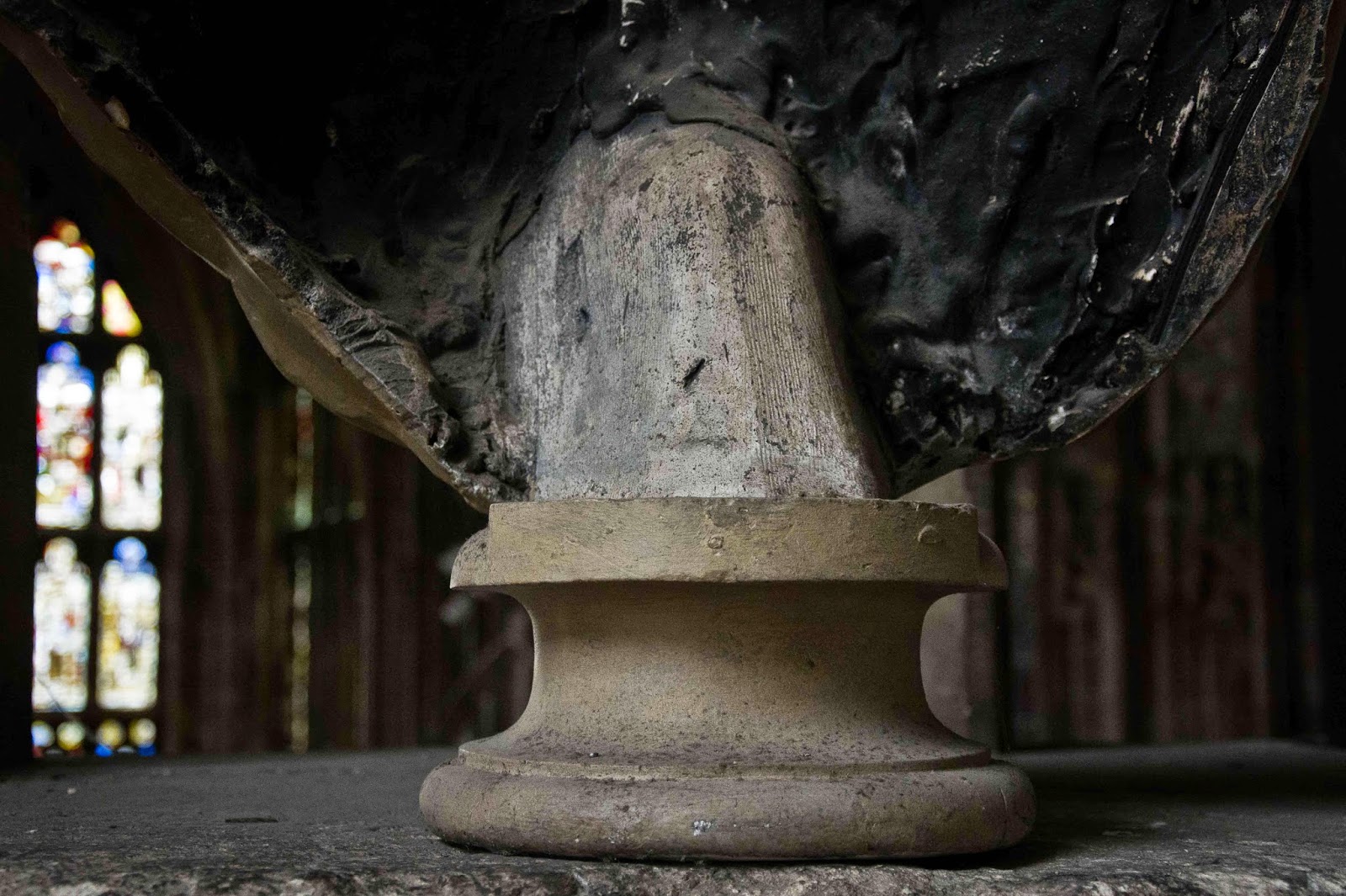 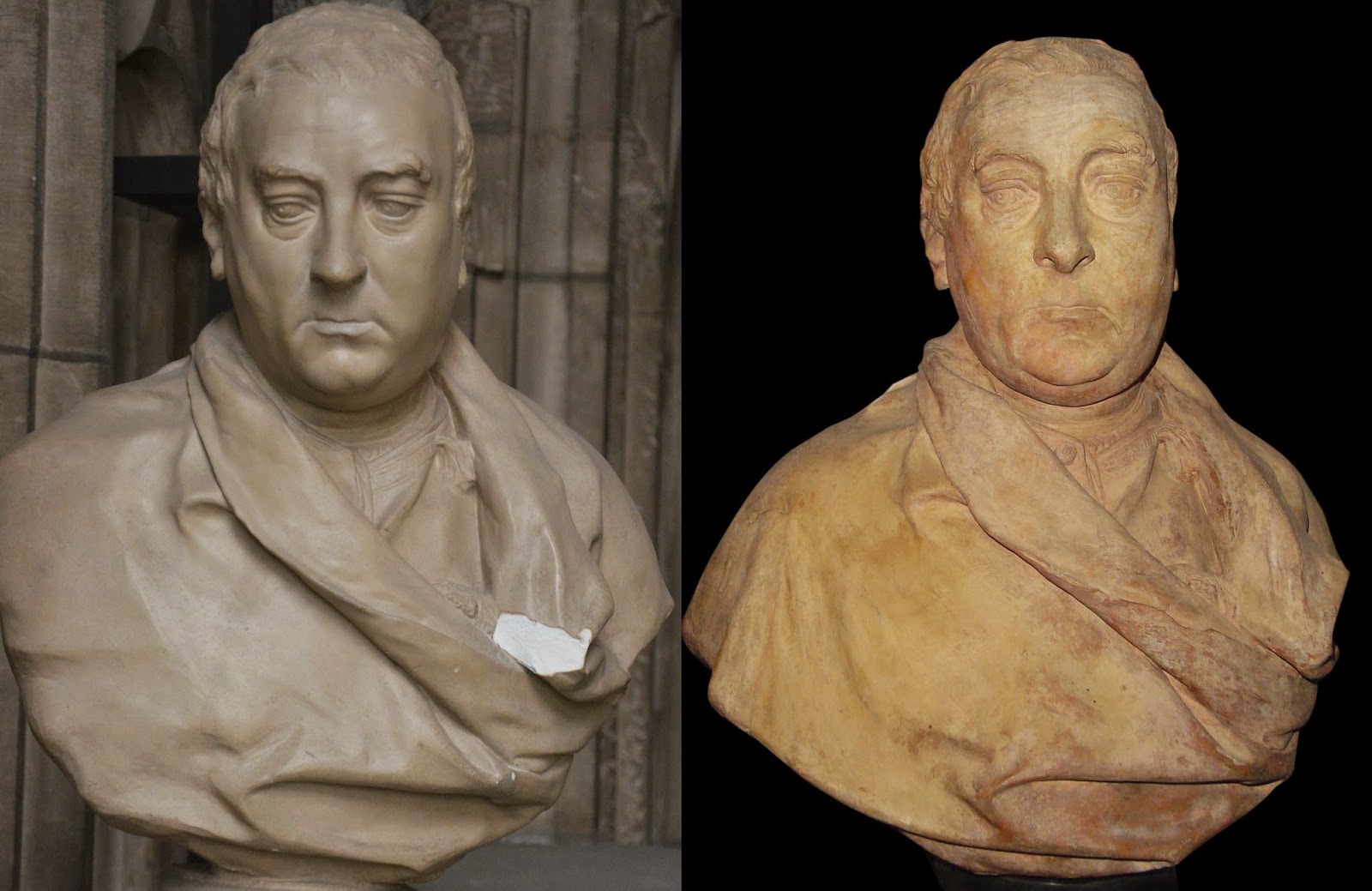 The Gloucester plaster bust of Handel with the Grimsthorpe terracotta for comparison. 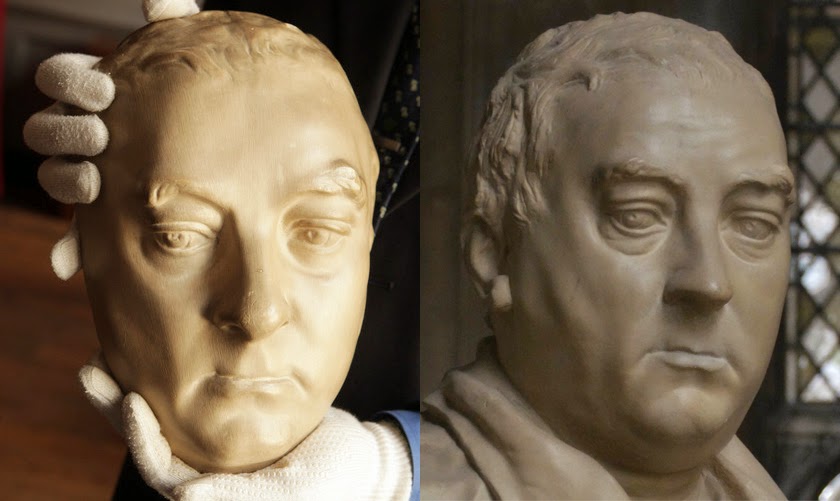 The so called life mask recently exhibited at the Handel House Museum in Brook Street, London  with the Gloucester plaster bust for comparison. 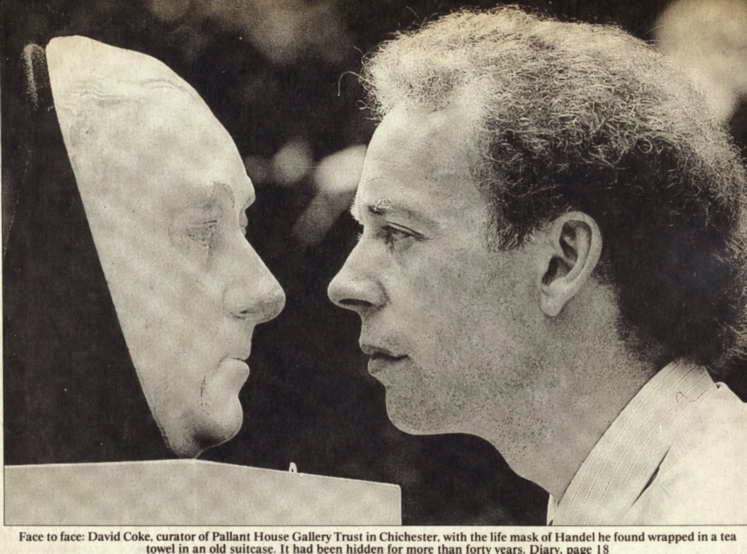 An amusing photograph of David Coke and almost certainly not the life mask, but a cast taken from a version of the Handel bust without a hat. 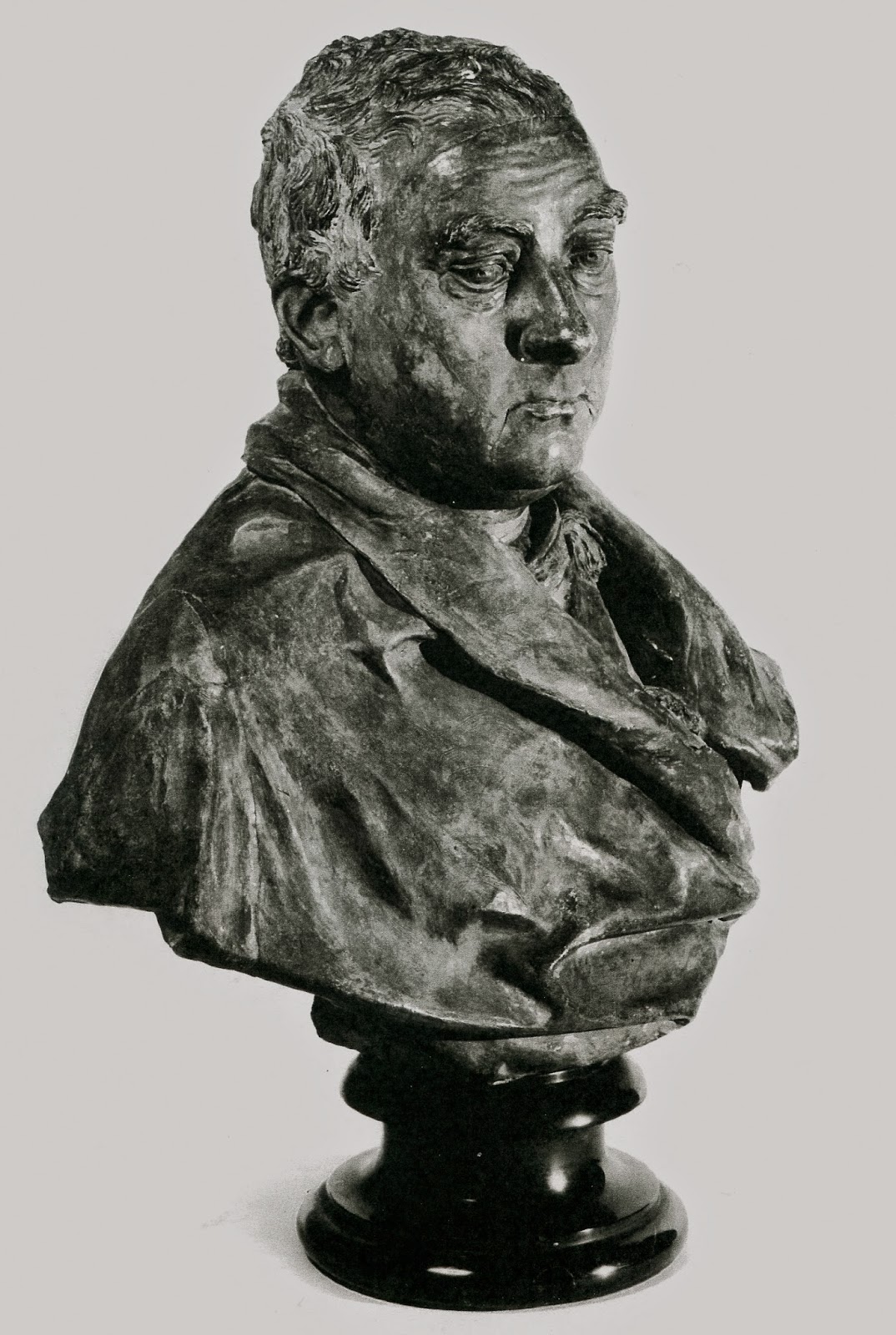 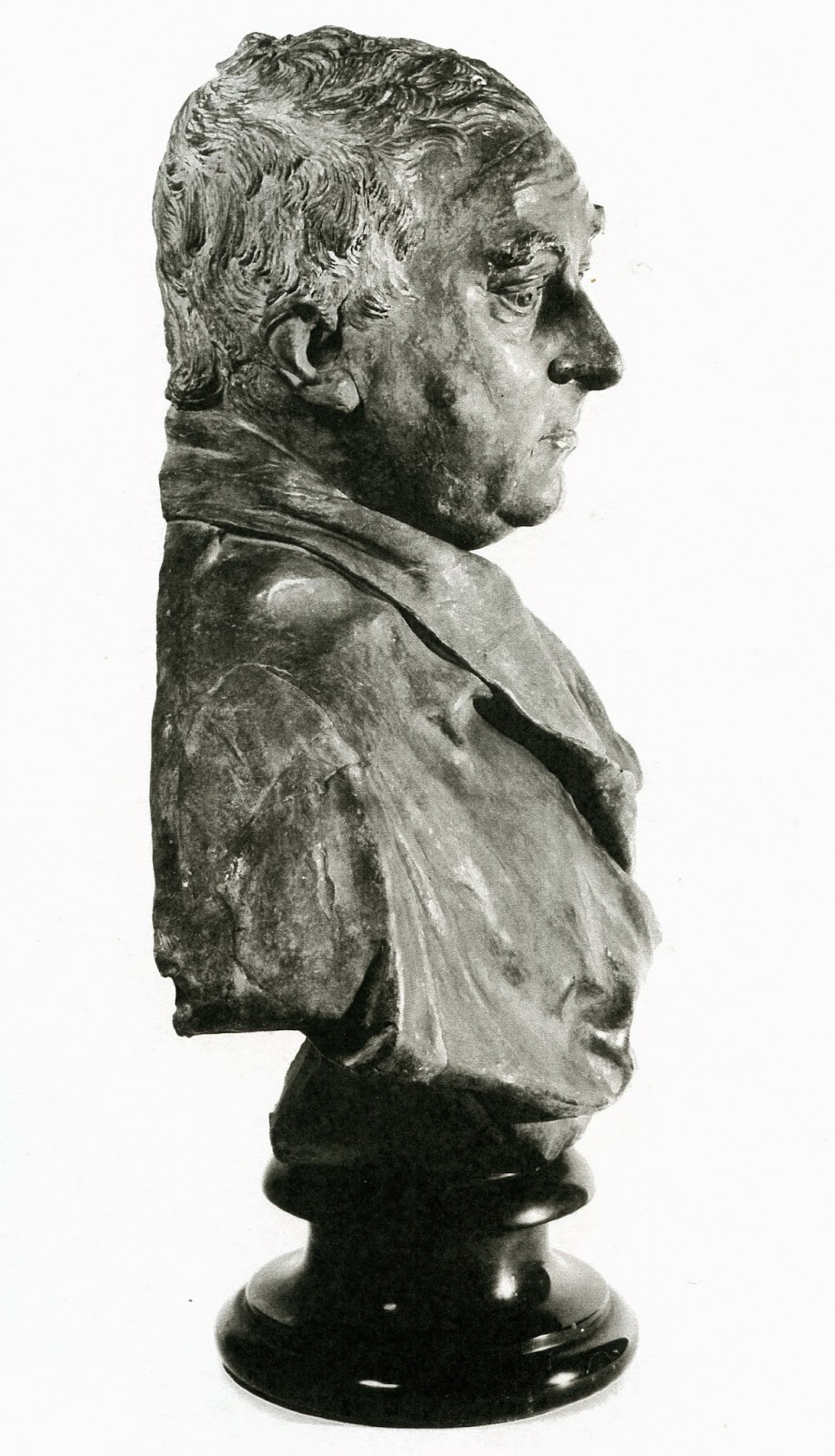 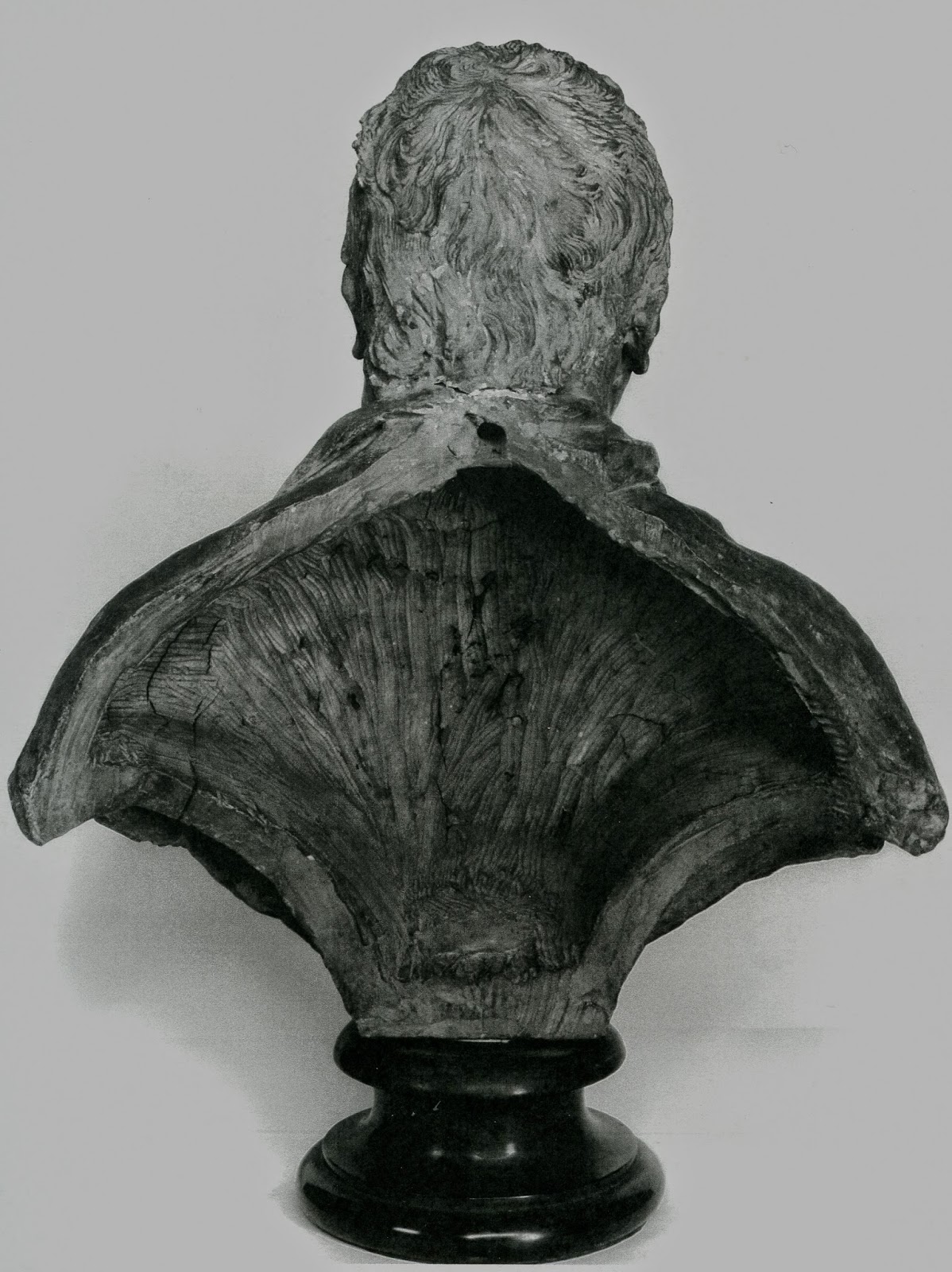 Three more not very good photographs above of the Grimsthorpe terracotta from the Heinz Archive at the National Portrait Gallery.

Plaster busts of Handel in The HarrisCorrespondence of the 1740's.

Handel's friend James Harris (1709-80), who seems to have been involved in procuring from Roubiliac plaster busts of Handel for the Countess of Shaftesbury (Lord Shaftesbury, another friend of Handel, was Harris's cousin); for Charles Jennens, the wealthy patron of the arts, librettist for four of Handel's oratorios (including Messiah), and the composer's friend; and possibly for Harris himself. It is not known whether these busts were plaster versions of the rediscovered Sotheby's bare headed bust (which would therefore date it to 1741 at the latest) or of another bust of Handel by Roubiliac, such as that now in the Royal Collection (the latter dated 1739) the one with the hat. The letters (from which extracts are quoted below, as they are written, but with the addition of punctuation) are included in the James Harris archive, which itself is part of the wider Malmesbury collection at the Hampshire Records Office. (96) Some of the letters are from Roubiliac to Harris, and some are between Harris relatives and refer to the plaster busts of Handel by Roubiliac.

In a letter written from London and dated 16 April 1741, Roubiliac informed James Harris in Salisbury that a plaster 'busto' of Handel was finished and ready to be sent wherever Harris should direct, enquiring further whether Harris would like him to leave the bust white or 'put a coluor upon it' (ie a patina). On 21 April, James's brother, Thomas (a friend also of Handel and the recipient from him of a legacy of 300 [pounds sterling]), wrote to James from Lincoln's Inn that he had visited Roubiliac that evening and seen the bust, 'and like it very well. What he [Roubiliac] mean't by colouring was only making the whole of a light dun colour, as the original you saw is: and that he says will keep clean better, and I think it looks handsomer. If therefore you approve of that, write him word that you would have it colour'd as the original is, and he says he'll do it immediately.' On 18 June, Thomas again wrote from London to James in Salisbury, 'I called at Roubilliac's to day about the bust for Lady Shaft[esbury] but found it was not coloured yet, so it cant be sent till the carrier that sets out next week.' On the 27 June 1741, Lady Shaftesbury wrote, probably from St. Giles's, to James Harris in Salisbury, 'Thursday I received the busto of Hendel and am very thankfull to my cousin Thomas Harris for negociating this affair for me[.] I have dispos'd of it in a place of highest eminence in my room and please my self with thinking you will approve of it[.] I hope soon to have an opportunity of reimbursing my cousin T. Harris for this and the expences attending its coming down.'

On 10 July 1741, Roubiliac wrote in reply to a letter he had received from James Harris: 'I have receiv'd your obliging letter, and in answer I shall acquaint you that Mr Hendel's busto shall be near ready to morrow, so I hope you will be pleas'd to send how to direct it. You know I have Mr Popes busto which I have likewise made after life. I have also Milton's and Newton's[,] so in case any of your friends should want you will be pleas'd to reccomend them[;] but bustos being works by which there is little to be got but reputation [,] I desire you will let your friends know that my chief talent is marble works, such as monuments, chimneys, tables, all which I hope to do, to the satisfaction of those that will do me the honour to employe me.'

With reference to another bust of Handel that was intended for Jennens, on 24 July 1741, Jennens's cousin, Lord Guernsey, at Powderham in Devon, wrote to James Harris in Salisbury, As soon as I can inform myself, who is Mr Jennens's carrier, I shall beg the favour of you to give Roubillac directions how to send the bust'.

from "By Heaven Inspired" by David Wilson British Art Journal

Posted by David Bridgwater at 13:51