The Oxford Physic Garden, formally established in 1621, was secured through a benefaction of £5000 to the university made by Henry Danvers (1573–1644) First Earl of Danbv, although the university had accepted the need for a ‘Garden for Physical Simples’ more than a year earlier.

Wiltshire-born, Oxford-educated Danvers, was a soldier, landowner and courtier to King Charles I.

A field outside the city walls, the land was formerly used as a Jewish cemetery. The Jews were expelled from Oxford in 1290. Four thousand loads of “mucke and dunge” were needed to raise the land above the Cherwell flood-plain.

The walls were to be as “well fair and sufficient as All Soules College walls, Magdalen Colledge Tower, or any of the fairest buildings in Oxford both for truth and beauty”,
The land was rented from Magdalen College, which was outside the city wall, close to the River Cherwell. The walls and gates, completed by 1633, cost Danvers more than £5,000. The multipurpose garden wall, made of local limestone, defined the garden’s limits and separated Danvers’s gift from the rest of Oxford. The wall’s great scale emphasized the university’s prestige, whilst at the same time protecting the enclosed area from unwelcome incursions.

Besides thephysical protection, the wall had horticultural value as a windbreak and heat trap, helping tender plants grow and choice fruits ripen. In 1670, a ‘Plantarum conditorium hyemale’, for evergreens such as myrtles and citruses, was built adjacent to the Physic Garden. Eventually, this substantial building was converted to a herbarium, library and accommodation for the professor.


The chief entrance was the northern gateway, embellished with statues of Charles I and Charles II, (fn. 6) and with a bust of Danby over the centre. It is one of the earliest structures in Oxford using the classical style of architecture.

Inigo Jones has been credited with the design for the gateway, but there is no documentary evidence to support this attribution and there is a statement to the contrary in Charles Stoakes's list of works by his uncle, or grand-uncle, Nicholas Stone: 'The Curious Phisicke Garden hee desined & made the Entrances of Stone att Oxford now to be seene.'

That Nicholas Stone was the builder of all three gateways is clear from an entry in his diary: 'In 1631 Agreed with the Right Hon. Lord Earell of Danby for to mak 3 ston gattes in to the phiseck garden Oxford and to desine a new Hows for him at Corenbury in Oxfordsheer.'

W. L. Spiers, The Note Book and Account Book of Nicholas Stone (Walpole Society), 137. The inclusion of the Banqueting Room at Whitehall and other works in the list possibly throws doubt upon its value; but Stoakes may have meant only that Stone was a contractor on such buildings, and he probably ought not to be understood as crediting his uncle with the design unless he expressly says so. 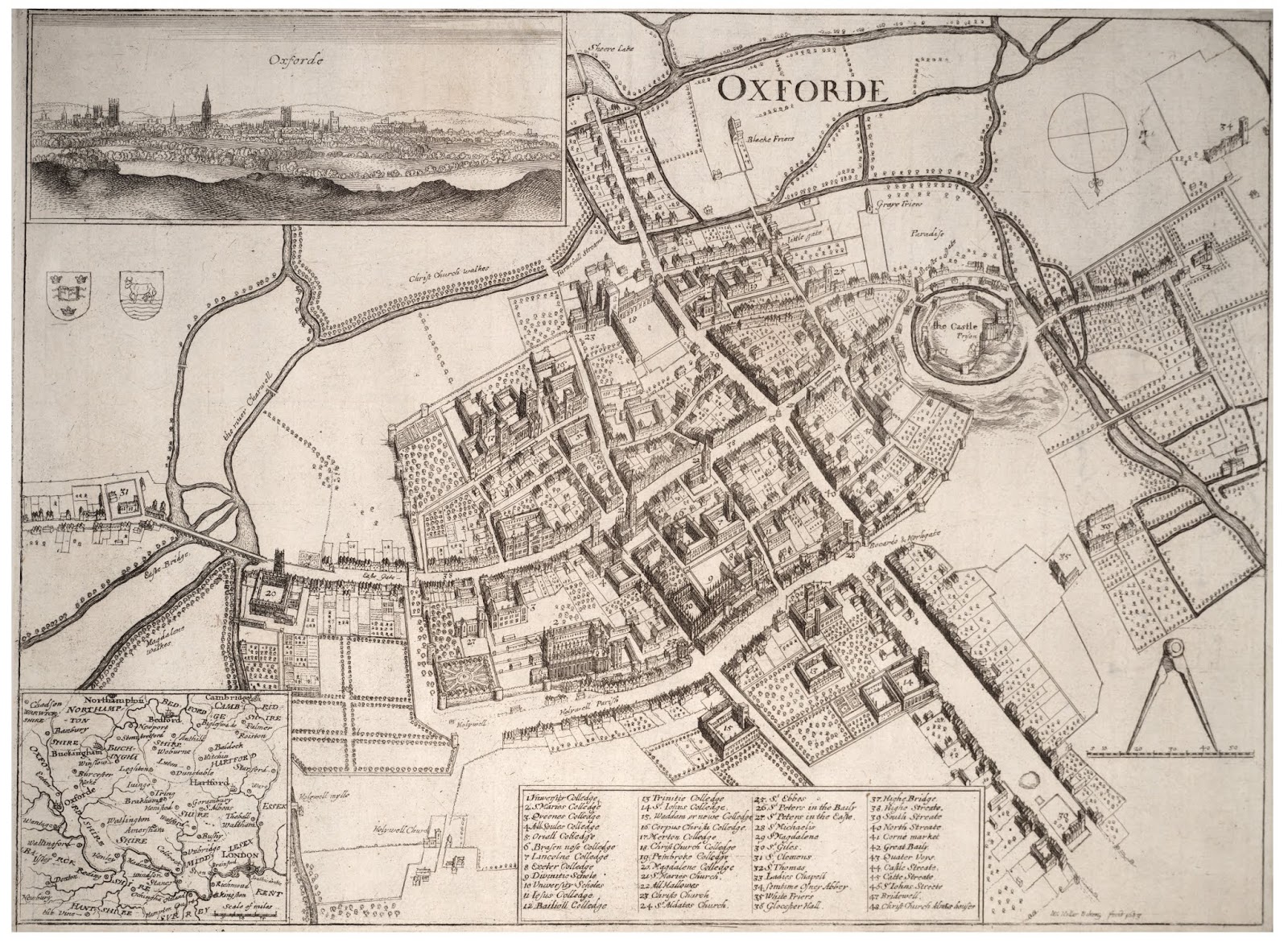 
from the Wenceslas Hollar Digital Collection 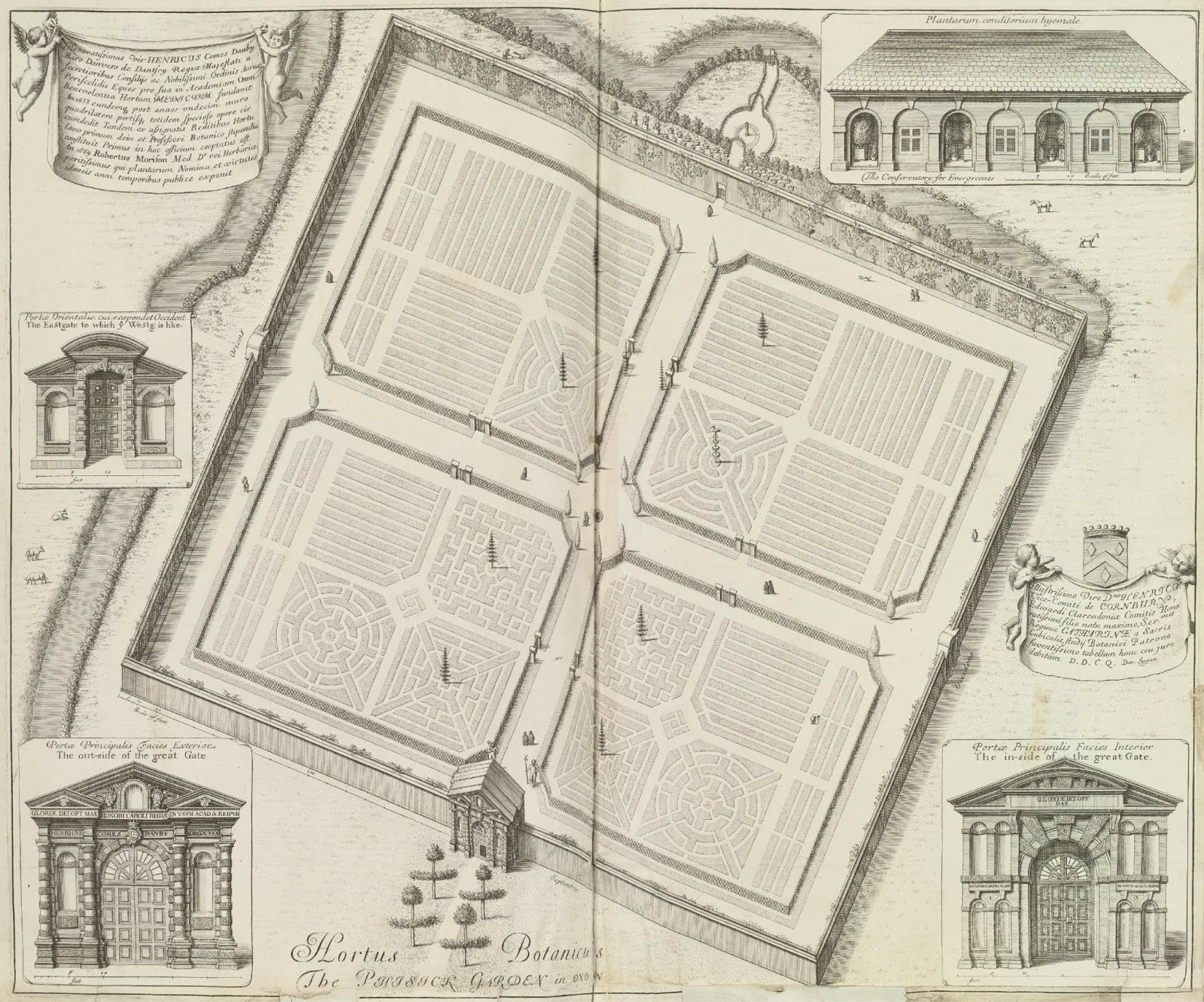 This engraving doesn't show the statues or bust in the niches of the main gate.

The bust of Danby and statues of Charles I and Charles II by Vanderstein have not yet been added.

Comparison with the Eight full length statues on the West front of Queens College Library is instructive.

Illustrations above  from - Five bookes of architecture: translated out of Italian into Dutch and out of Dutch into English
by Serlio, Sebastiano

The Danby Gate building has the inscription on the Northern front -

The Danby Gate building has distinct similarities with the Duke of Buckingham's York House Water Gate. York House was demolished in 1675. It is now marooned in the Embankment Gardens, a park between the Strand and the Embankment.

For the statues see 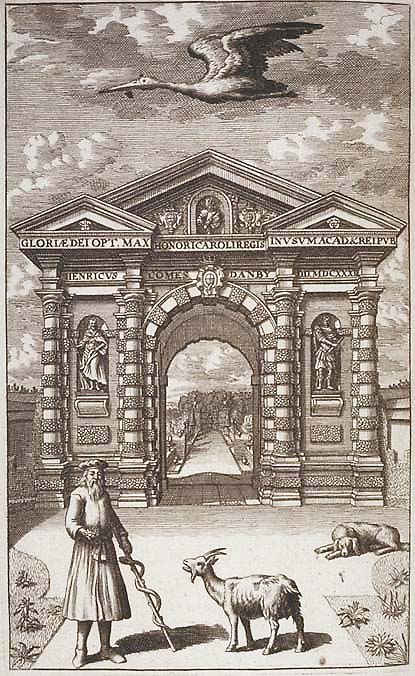 Frontispiece from Vertumnus. An Epistle to Mr. Jacob Bobart, Botany Professor to the University of Oxford, and Keeper of the Physick-Garden
Oxford, 1713. 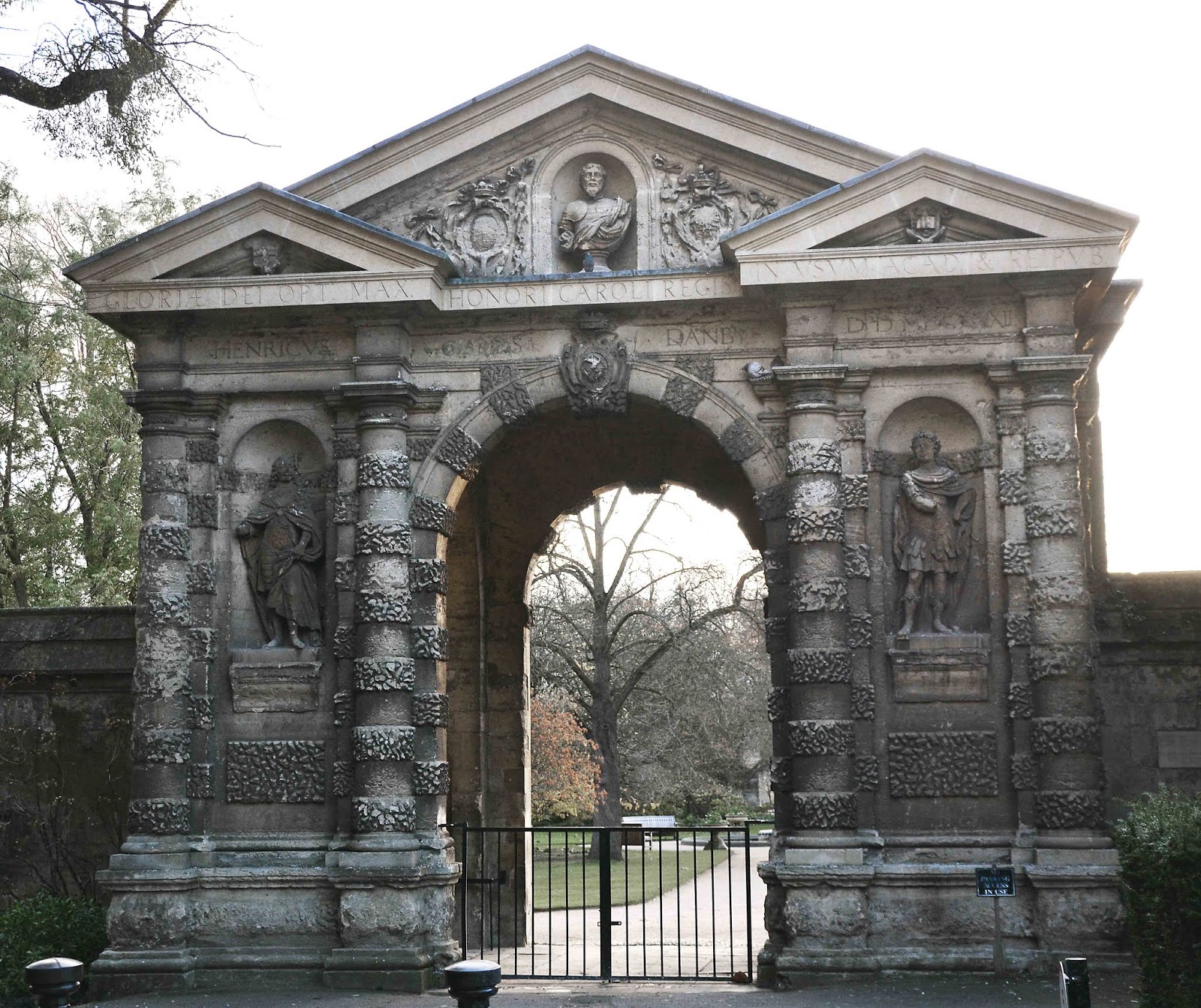 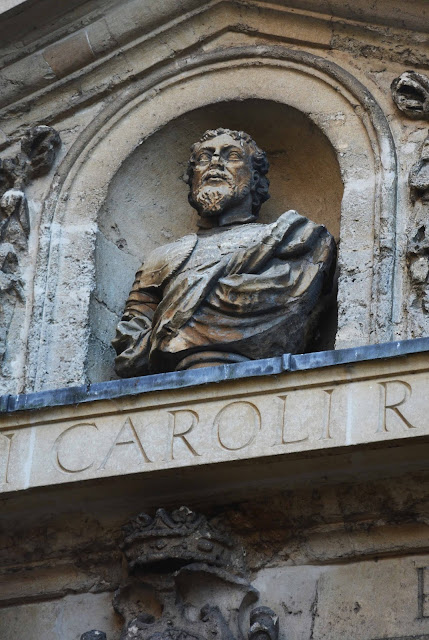 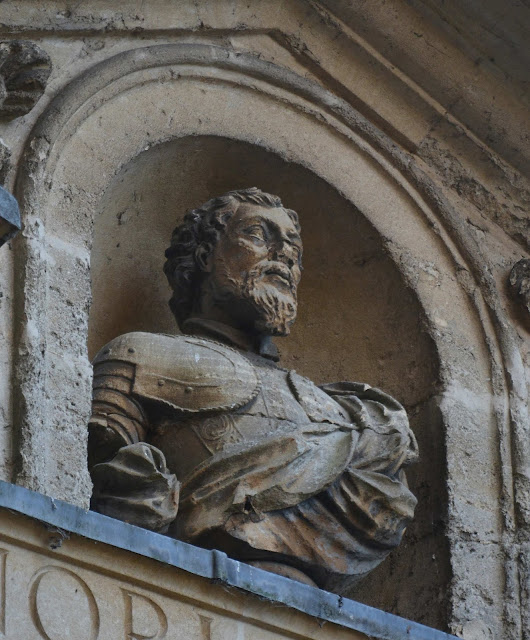 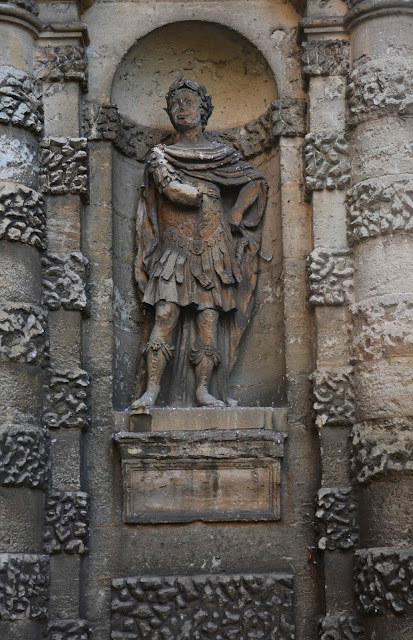 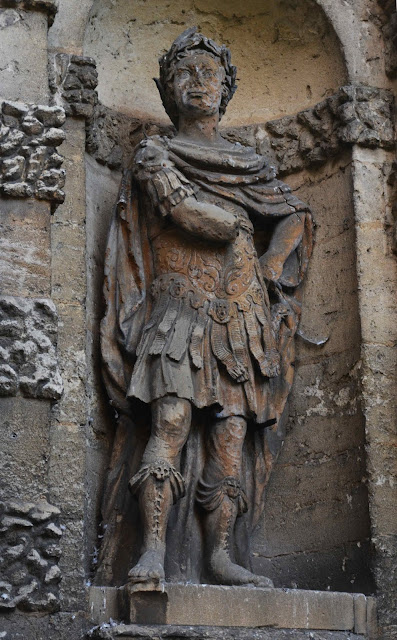 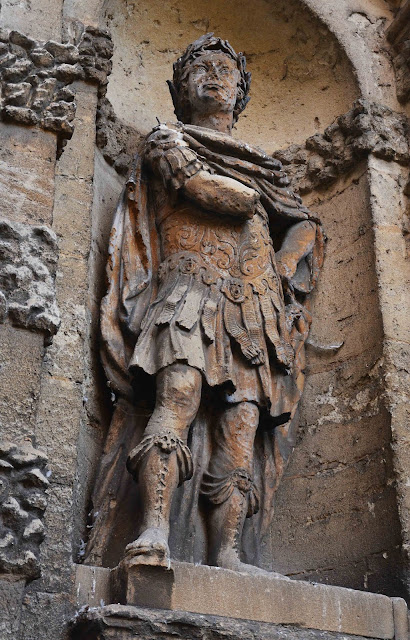 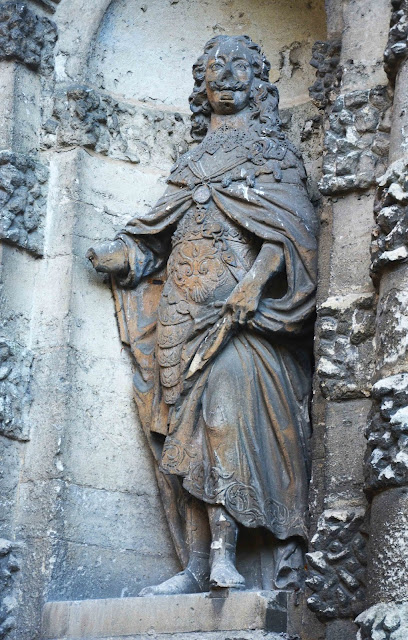 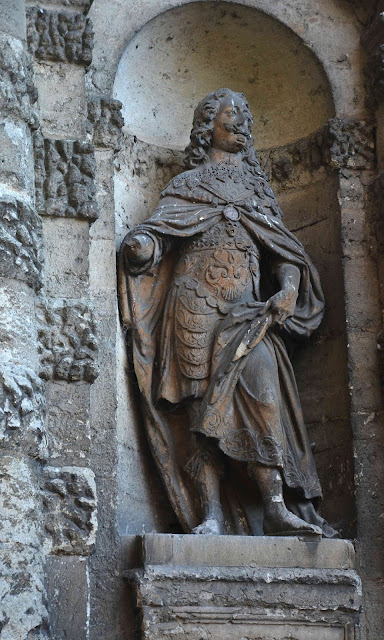 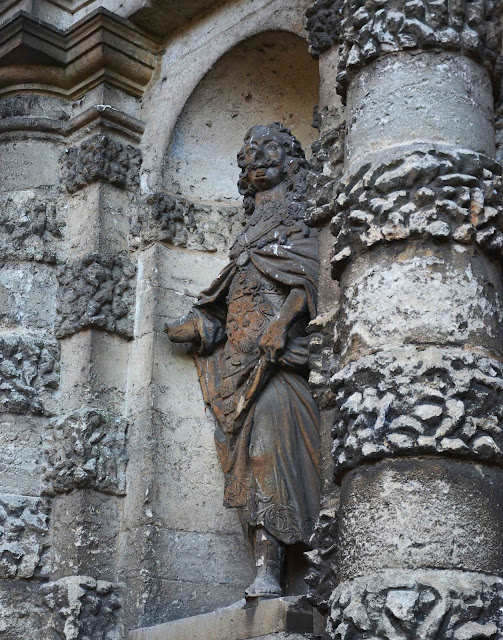 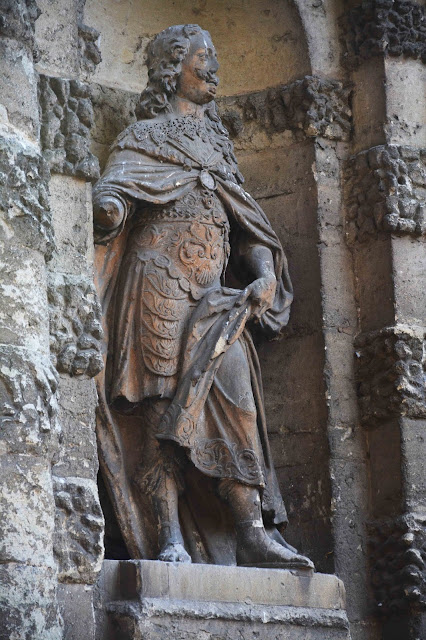 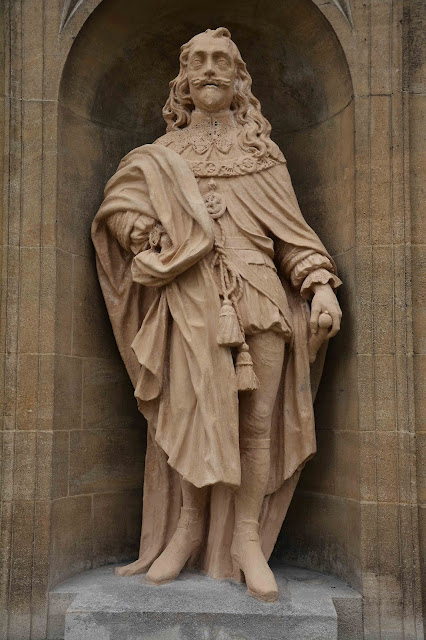 One of the eight stone statues on the west front of the Library at Queen's College, Oxford.

All photographs here by the author. 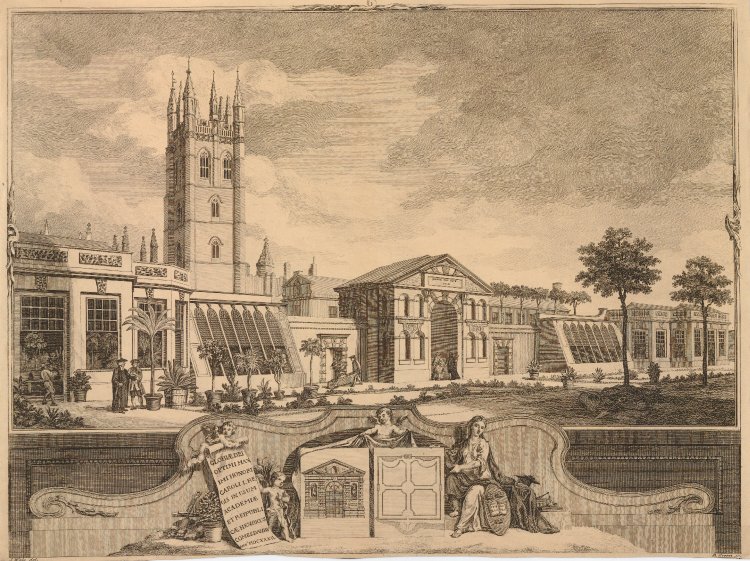 This engraving has been cut from the Oxford Almanac of 1766.


View of the Physic Gardens in Oxford, greenhouses on either side of a gateway in the centre, behind it the Professor's house, library and tower of Magdalen College; below, a plan of the garden and view of the north side of the gateway.


© The Trustees of the British Museum 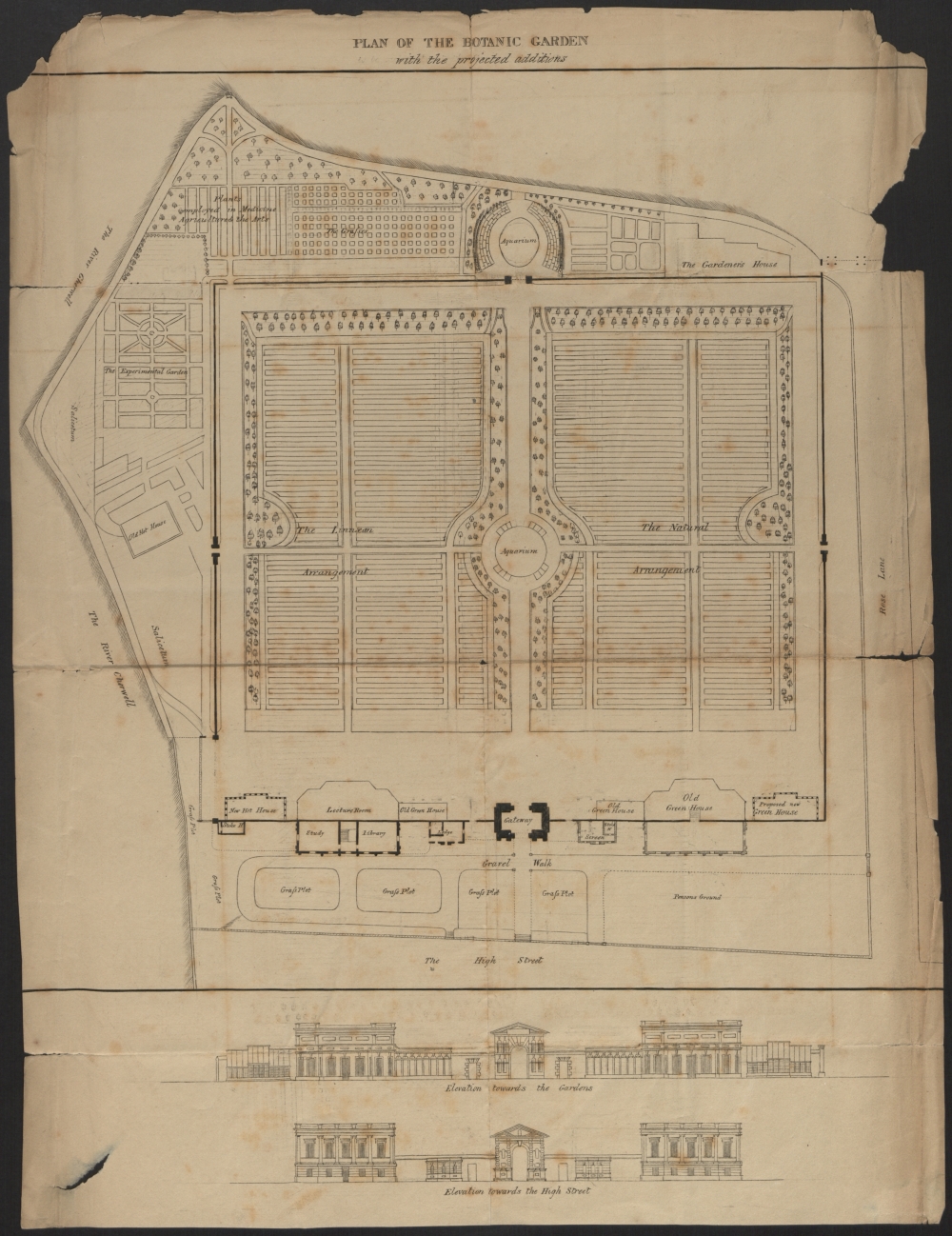 Image courtesy Oxford Museum of the History of Science.

Posted by David Bridgwater at 11:13