Some rough notes - the quoted sources here need to be checked :-

This blog entry is part of a much larger work investigating and recording the 17th and 18th Century portrait sculpture at Oxford. This project was suggested to me by Dana Josephson of the Bodleian Library, Oxford who is currently in the process of cataloguing the portraits at the Bodleian and to whom I extend my heart felt thanks.
____________

A brief biography of John Vanderstein.

In the Account Books at Queen’s College Oxford he signs his name as Joannes Vander Stein.

On 16 November 1678 a licence was granted for John Vanderstaine to be employed in the Kings service at Windsor Castle under the architect Hugh May.


1678 - ‘For drawing and making of several designs, models and figures in clay for ye pedestall under His Majesty’s statue and for carving ye stone eagles that the brasse dyall is set upon’ National Archives - A01/2478/271

On 21 May 1679 The Privy Council granted him a further permit allowing him to "remaine here wth out molestation together with John Oastes (John van Nost I) and Arnold Luellan (Arnold Quellin)" and"to go freely about the cities of London and Westminster, until further orders (The National Archives Domestic Entry Book, Car II, Vol LI, SP44/51 fol 77-79).

Three days later Hugh May (1621 - 1684) certified that Vanderstein was one of the men employed at Windsor Castle (National Archives, Privey Council Register, PC, 2/68), where he worked on the elaborate royal throne, cutting slaves, a figure of Justice and two of Fame, as well as ‘three pieces of Trophies’ (Windsor Castle an Architectural History, John Hope, Country Life  1913, 318) (3).

The permit of 24 May 1679 refers to the services of the mural painter Antonio  Verrio, as well as noting Vanderstaine, Laurens Vandermuelen, Anthony Verhuke and Arnold Quellin - the last three described as 'servants to Grinling Gibbons, the Carver'

He also provided a pedestal for the King’s statue and sundry other work at Windsor (4).

Does this refer to the base of the equestrian statue of Charles II?

In 1684 - 5 he was in Oxford. ‘Mr Vanderstene Carver’ was paid £26 10s for unidentified work at the Physick Garden, and in the following year he was paid a further £7 12s for ‘cutting the Earl of Danby’s Statue, and for other Worke at the Physick Garden’ (Oxford, V-C’s Accts, Archive WP /21/5 unfol) see Gibson.

In c. 1693 he received £8 for models of classical philosophers and in 1694 a payment for ‘fretwork in the New Library’at Queen's College, Oxford .Gunnis

In 1696 he was also paid for carving the eight statues on the west front of the building, and for ‘two eagles and eight key-stones’. Gunnis.

Notes above adapted from A Biographical Dictionary of Sculptors in Britain... Yale 2009. 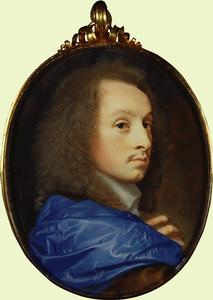 The most important person mentioned above is the architect Hugh May. It my suspicion that May was pivotal in the arrival of the various Dutch sculptors who worked with Grinling Gibbons (1648 - 1721) including Arnold Quellin (1653 - 86) and John van Nost I.

Hugh May was the seventh son of John May of Rawmere, in Mid Lavant, West Sussex, by his wife, Elizabeth Hill, and was baptised on 2 October 1621. He was a first cousin of Baptist May, Charles II's Keeper of the Privy Purse.

As a member of a Royalist family, Hugh May spent the years of Oliver Cromwell's Commonwealth in the service of the Duke of Buckingham. May arranged the transport of artworks from the Duke's York House to Holland, where the Duke was in exile. where he was exposed to the new classical style of architecture exemplified by the works of Jacob van Campen and Pieter Post.

May was a friend of the painter Peter Lely, and in 1656 the two of them travelled to Charles II's court in exile.  Besides Lely, May's circle included Samuel Pepys, who called May a "very ingenious man", Roger North and John Evelyn, whom May assisted in translating Roland Fréart's Parallel of Architecture.


At the Restoration of Charles II in 1660 (he was crowned on 23 April 1661), May was rewarded for his loyalty by being appointed Paymaster of the King's Works on 29 June 1660. His architectural commissions came from Court acquaintances, and his first completed work was Eltham Lodge, Kent (1663–1664), for Sir John Shaw, 1st Baronet. Built in brick, with a stone pediment and Ionic pilasters, the double-pile house reflected Dutch influence.

Cornbury House, Oxfordshire (1663–1668), was built in a similar style, but with a Corinthian pediment, for Edward Hyde, 1st Earl of Clarendon. May's most prominent house was Berkeley House, on Piccadilly, London (1664–1666, demolished 1733), for Lord Berkeley. It was again in the same style, but with the addition of quadrant colonnades, a feature derived from Palladio, and which was again much imitated.

At Cassiobury, Hertfordshire (1674, demolished 1922), May added wings to the home of the Earl of Essex, and redesigned some of the interiors, giving the woodcarver Grinling Gibbons his first major commission.

It is possible that May was the architect of the first Burlington House, for Sir John Denham, and he certainly advised the Earl of Burlington after he purchased the house in 1667. He was also involved in construction or alterations at Chilton Lodge, Berkshire (1666, rebuilt), Holme Lacy, Herefordshire (1673–1674), and Moor Park, Hertfordshire (1679–1684, rebuilt).


In June 1668, May was promoted to Comptroller of the King's Works, and was also appointed Clerk to the Recognizances, an office of the Court of Common Pleas.

In November 1673, he was further appointed Comptroller of the Works at Windsor Castle, where, from 1675, he remodelled the upper ward, adding to the apartments of Queen Catherine of Braganza, and built St George's Hall and the Royal Chapel.

Working with Grinling Gibbons, and the painter Antonio Verrio, May created a series of baroque interiors, the grandest of which, St George's Hall, served as a model for Wren's Great Hall at Greenwich Palace. The hall was demolished in 1826

For the first look at the works of Vanderstein and the interior plasterwork at Queen's College Library, Oxford see the excellent work by Veronika Vernier of Queens College Oxford the Article in :-


The Plaster Ceiling and its Masters at The Queen’s College Library (1692-1756), by Veronika Vernier available on line at -

The statues in the niches on the west front of the library of Queens College, Oxford:
From North to South.

The cartouche on the frieze on the East Front bears the arms of Thomas Smith, Bishop of Carlisle, 1684–1702, and the tympanum has a group representing Queen Philippa with attendant amorini. 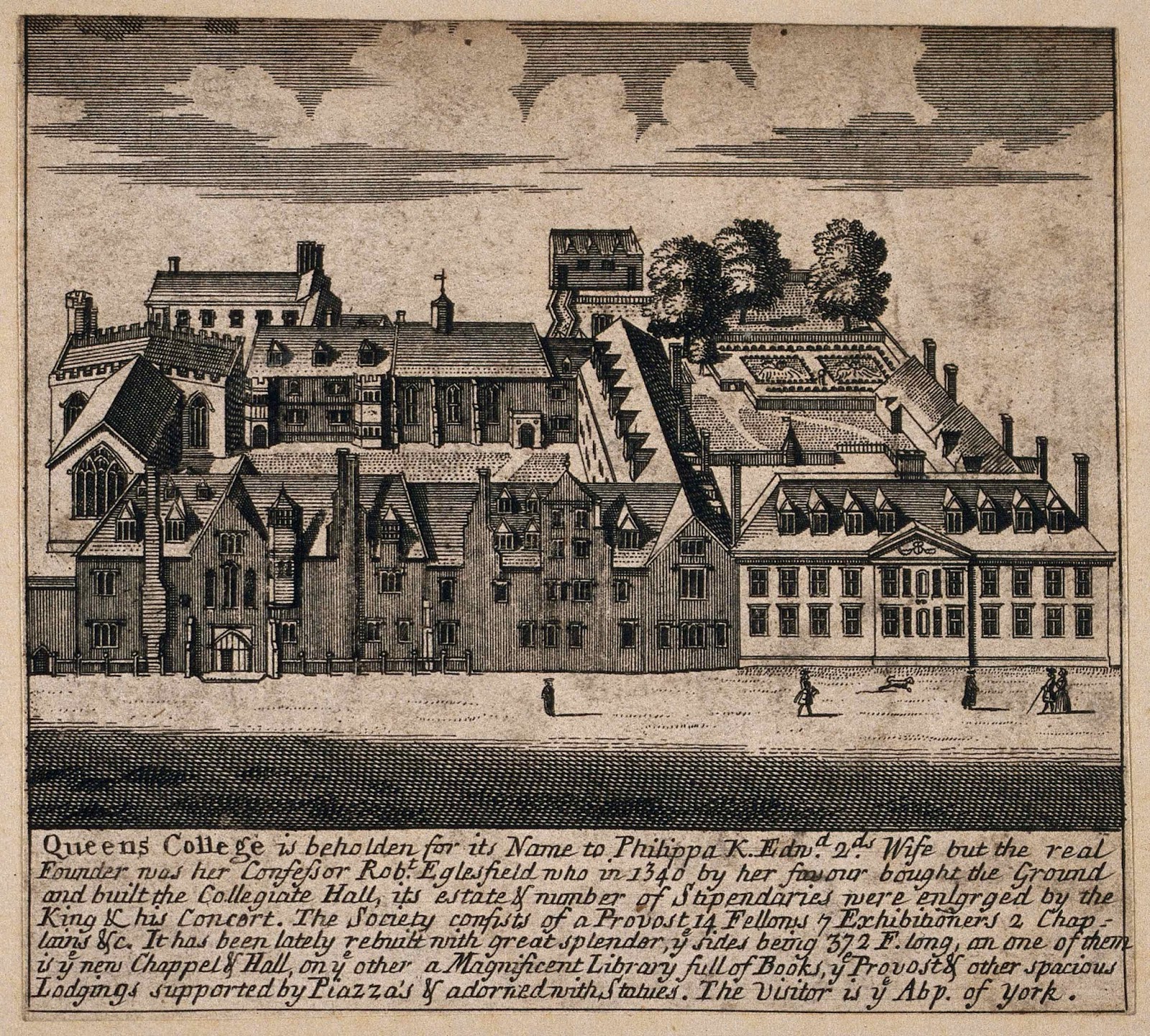 Mid 17th Century.
Prior to the rebuilding. 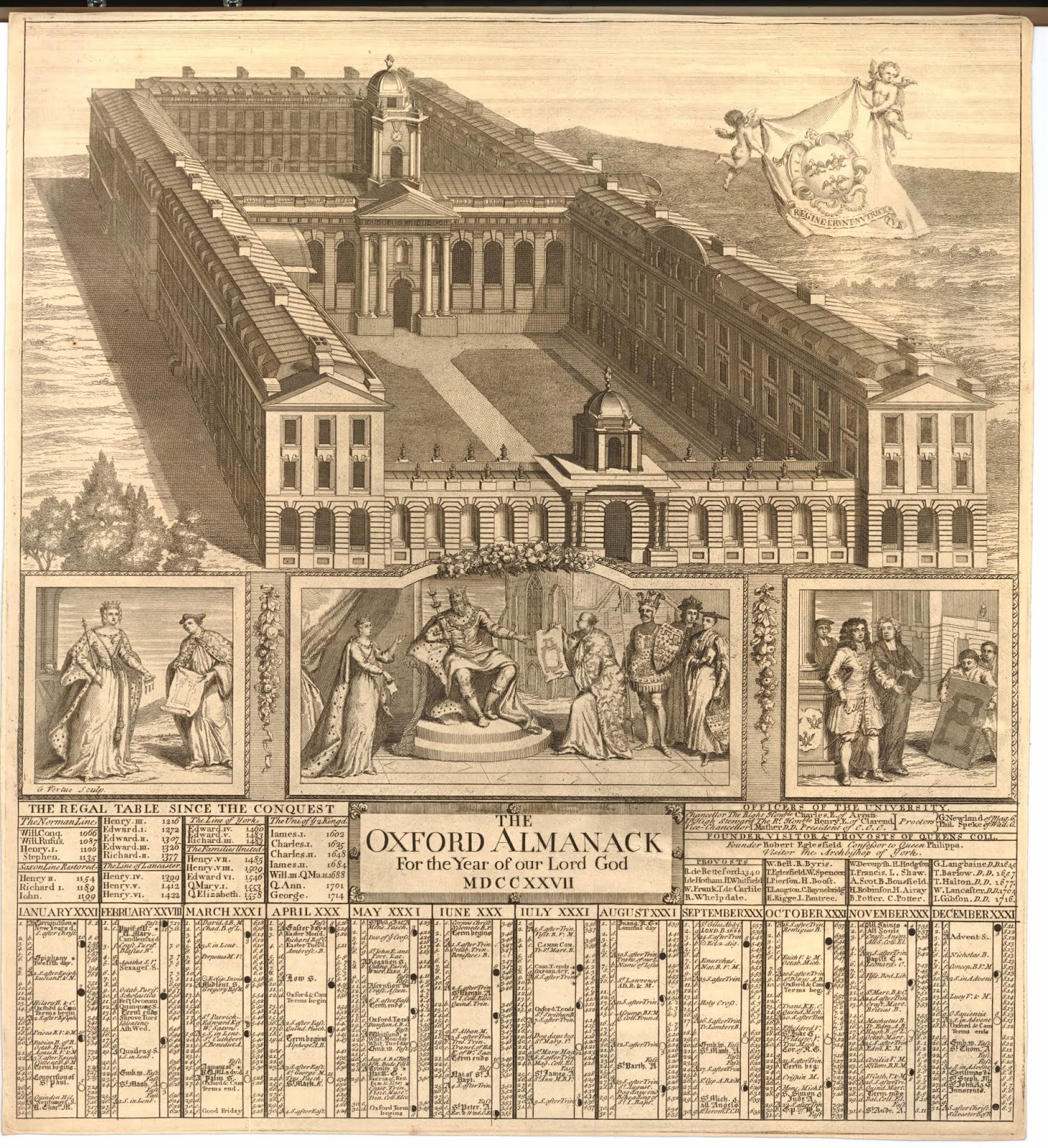 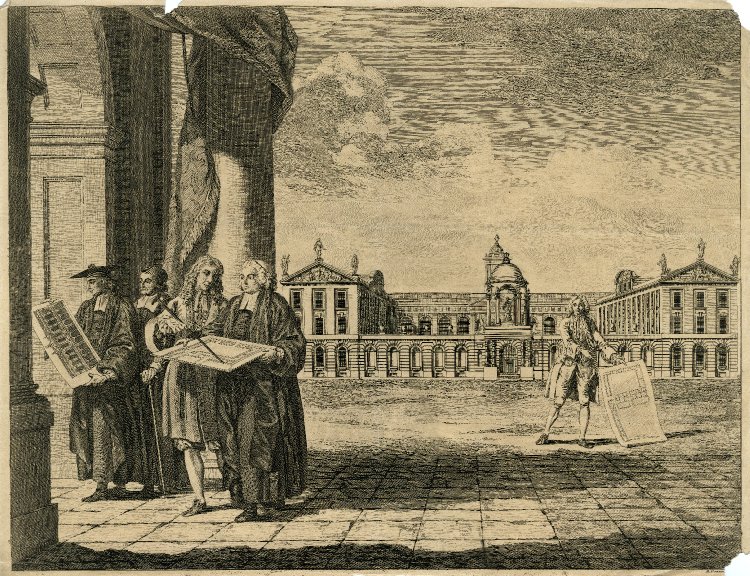 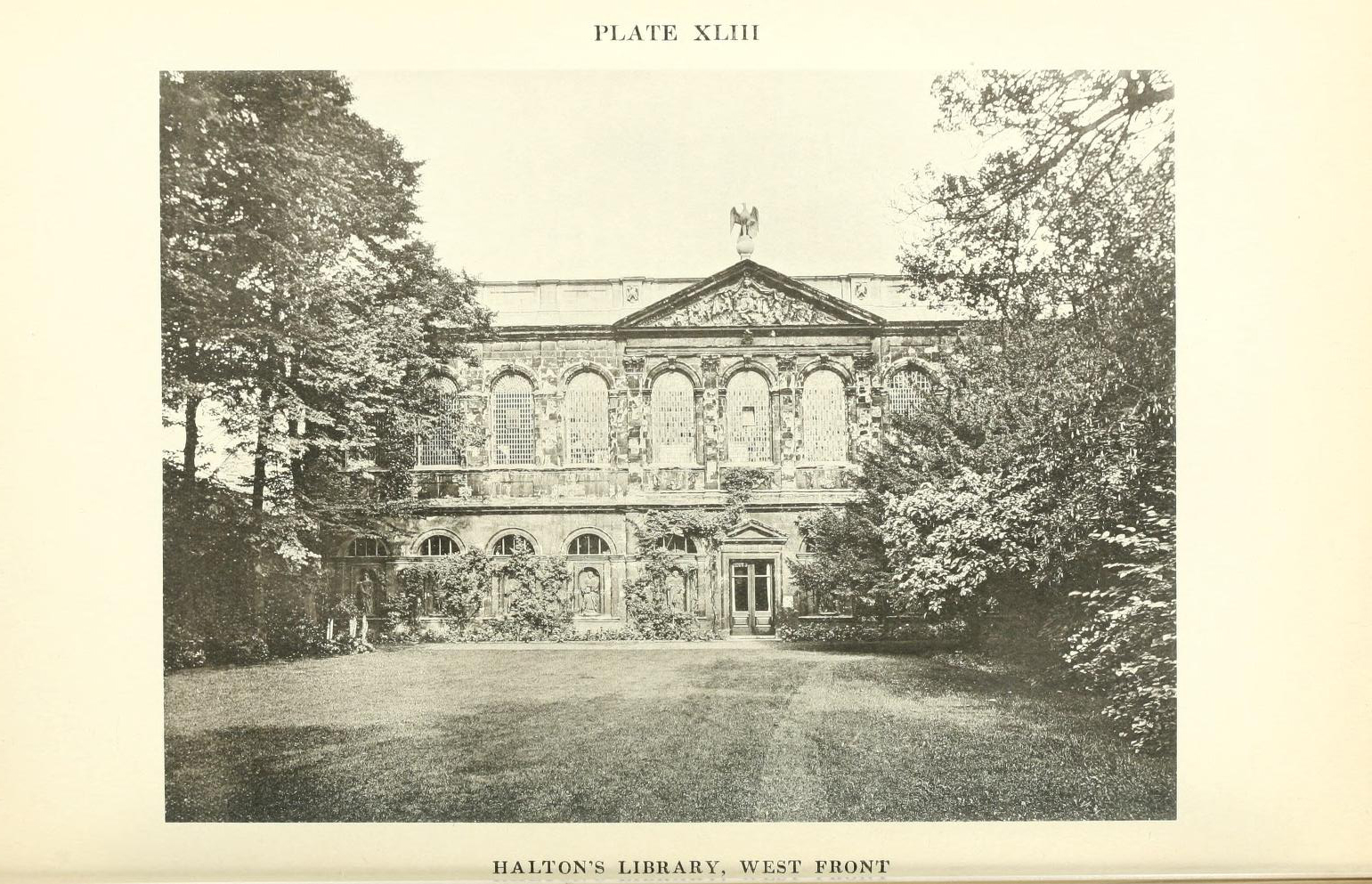 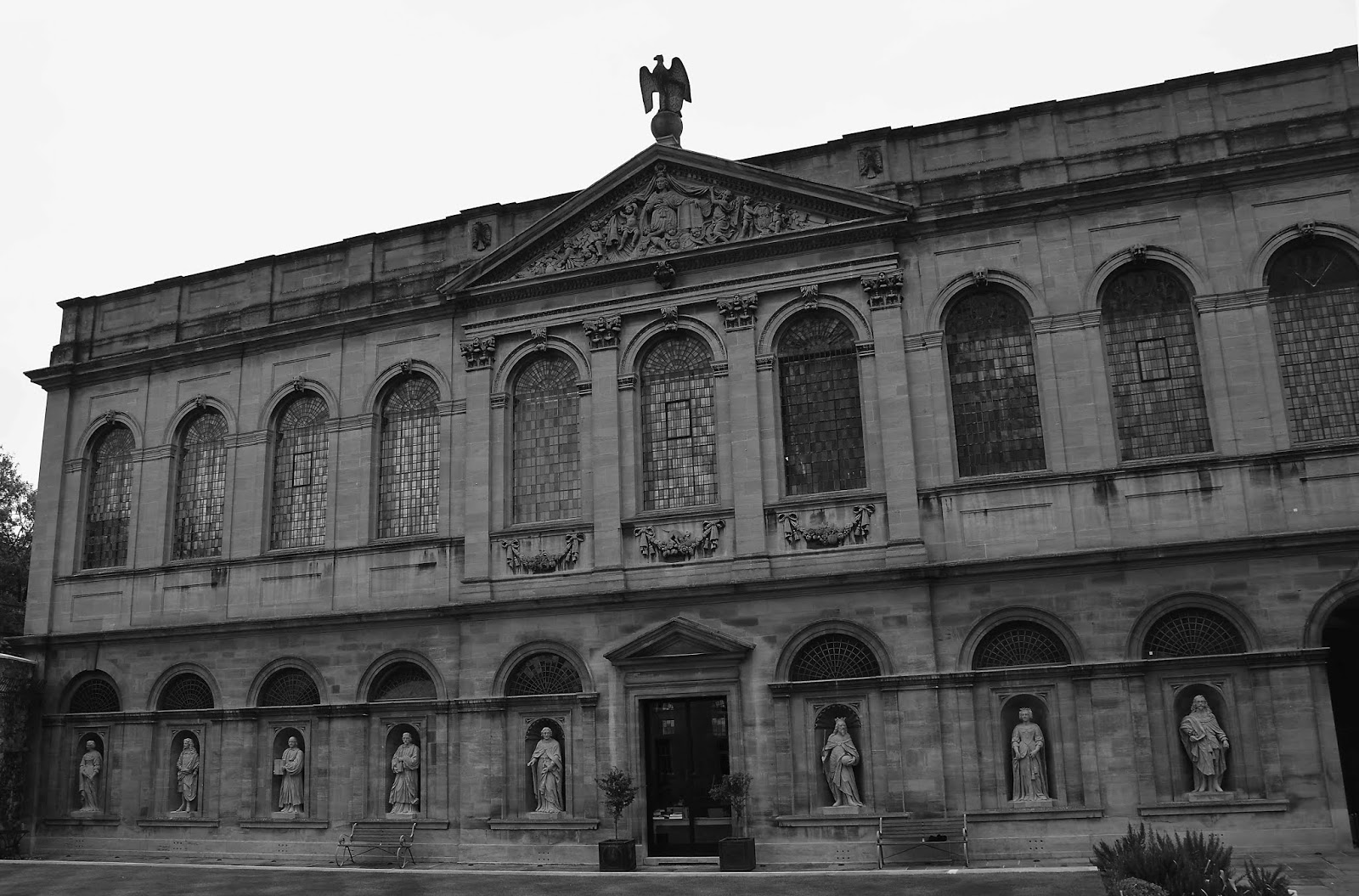 Photograph by the author. 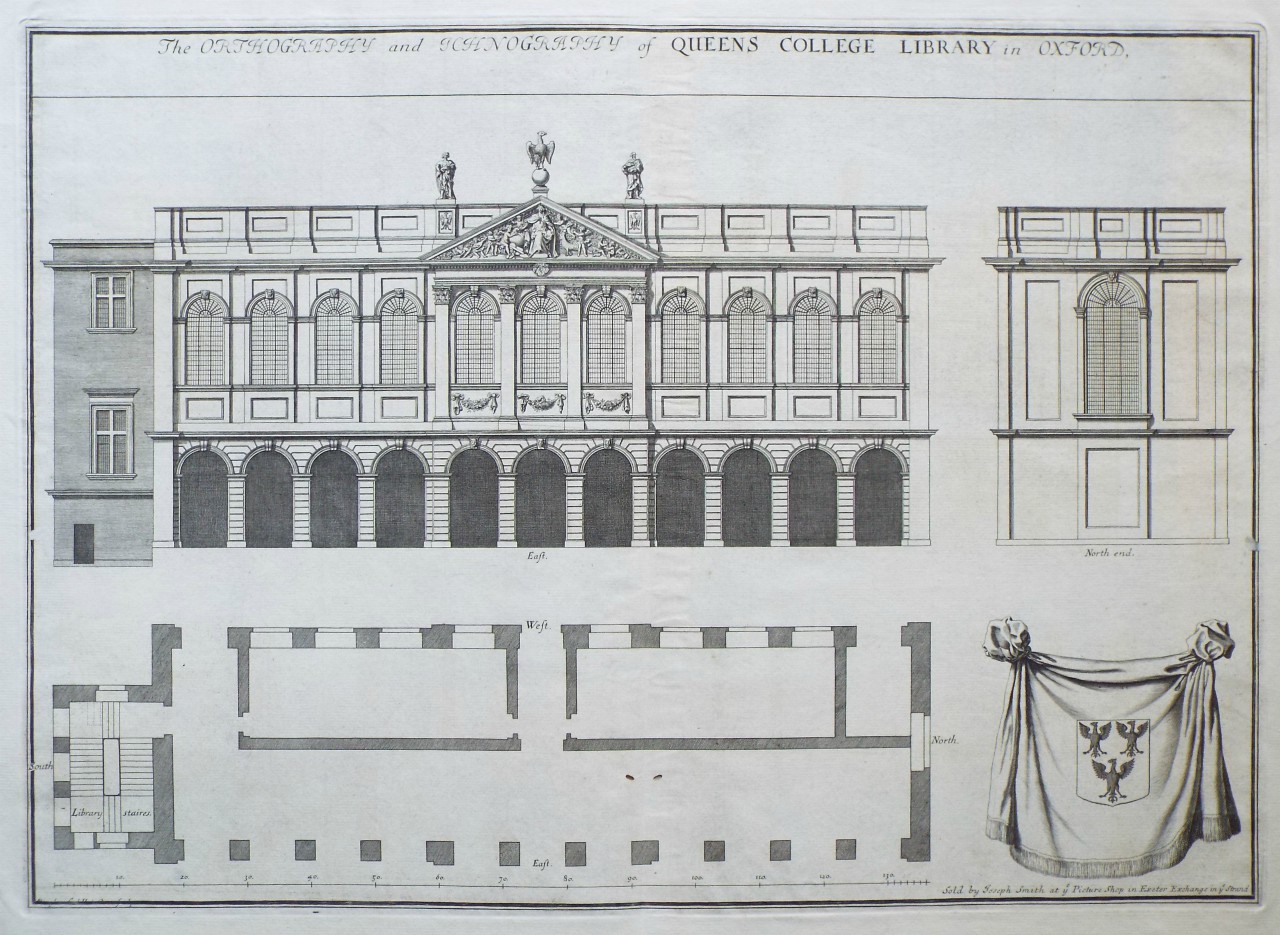 The East Front of the Library at Queen's College, Oxford.

Burghers was born in Amsterdam, he emigrated to England soon after 1672. He worked in Oxford, initially as Loggan's assistant from 1673, and was appointed University engraver after Loggan's death in 1692. 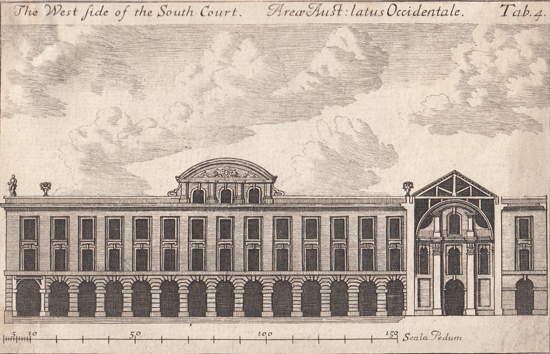 Note statue on the left on the High Street front. 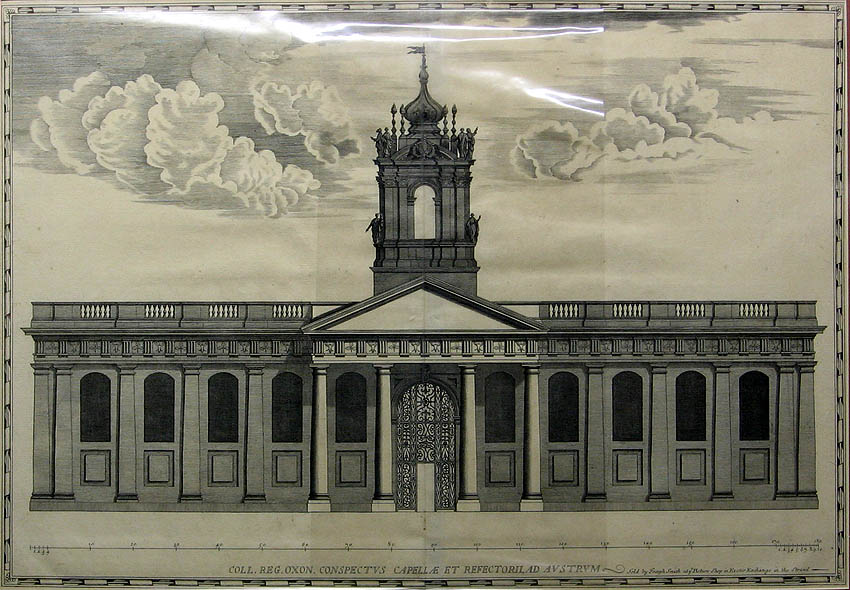 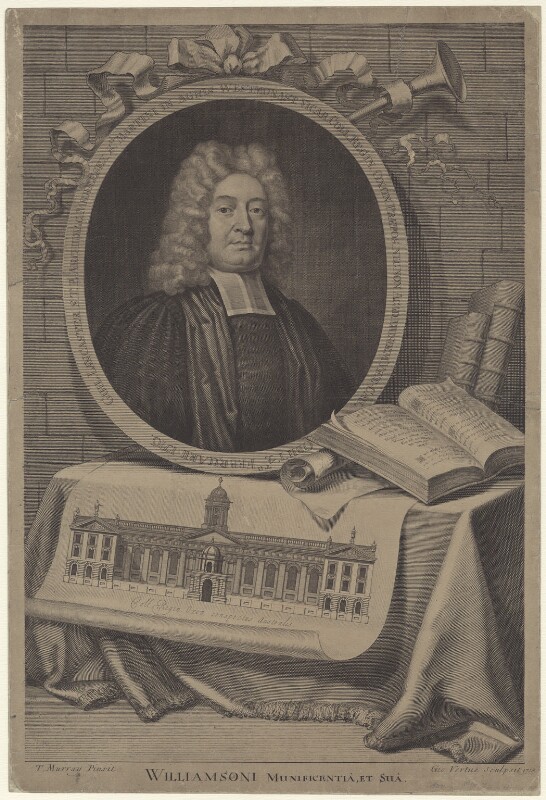 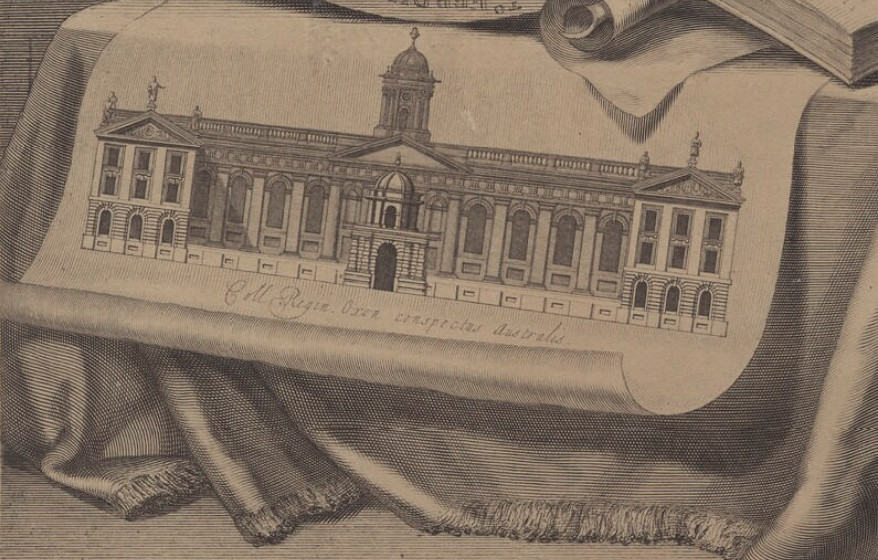 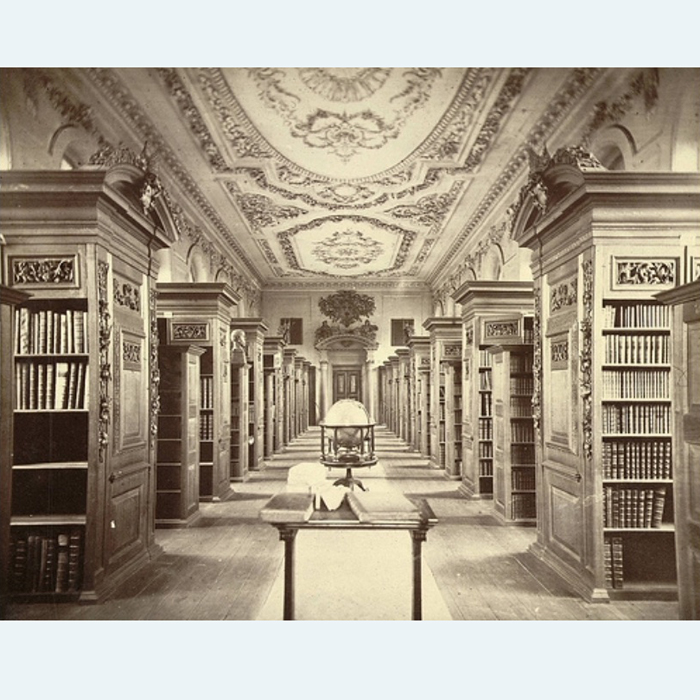 The Library at Queens College between 1850 and 1880.
Photograph from -

For the Library refurbishment see -