Extract from Tours in Wales by Thomas Pennant, 1810.

"The church of Chirk is dedicated to St. Mary; and was formerly an impropriation belonging to the abby of Valle Crucis. Within is a profusion of marble, cut into human forms, memorial of the later lords of the place, or their ladies. The best bust of Sir Thomas Middleton, with a peaked beard, long hair; armed: and by him is another of his lady, a Napier of Luton. Sir Thomas was a successful and active commander on the side of the parlement during the civil wars. Towards the end of his life, he found that he had undesignedly established a more intolerable tyranny than that which he had formerly opposed. In 1659, he took arms, in conjunction with Sir George Booth, in order to restore the antient constitution. Sir George was defeated by the vigilant Lambert; and Sir Thomas forced to take refuge in his castle, where, after two or three days shew of defence, he was constrained to surrender on such conditions as the conqueror was pleased to dictate. The family pedigree says that the castle was commanded by his son (afterwards Sir Thomas) when Lambert came before it.

THE other monuments are composed of large and very ill-executed figures of lady Middleton, wife to Sir Thomas Middleton baronet, son of the former. She was daughter of Sir Thomas Wilbraham of Woodhey; and died at the early age of twenty-two, in the year 1675.

SIR RICHARD MIDDLETON, and his lady, Frances daughter of Sir Thomas Whitmore of Buildas. He died in 1716; she in 1694. At their feet lies their son Sir William, the last baronet, who survived his father only two years, dying at the age of twenty-four.

On a small mural monument, is an elegant epitaph on Doctor Walter Balcanqual, a Scotch divine of distinguished character. In 1617, he was appointed master of the Savoy hospital, which he soon resigned in favour of the able but desultory Marc Antonio di Dominis, Archbishop of Spalatro, in reward for his conversion to Protestantism. In 1618, he was sent to represent his country in the famous synod of Dort. He was promoted to the deanery of Rochester; and, in 1639, to that of Durham; by his great loyalty, having rendered himself hated by his countrymen, he was, in 1645, obliged to take refuge in Chirk castle; but, sinking under the fatigue of journey, and severity of the weather, he died on Christmas-day. The epitaph was composed by Dr. Pearson bishop of Chester, at the request of Sir Thomas Middleton, by whom the monument was erected". 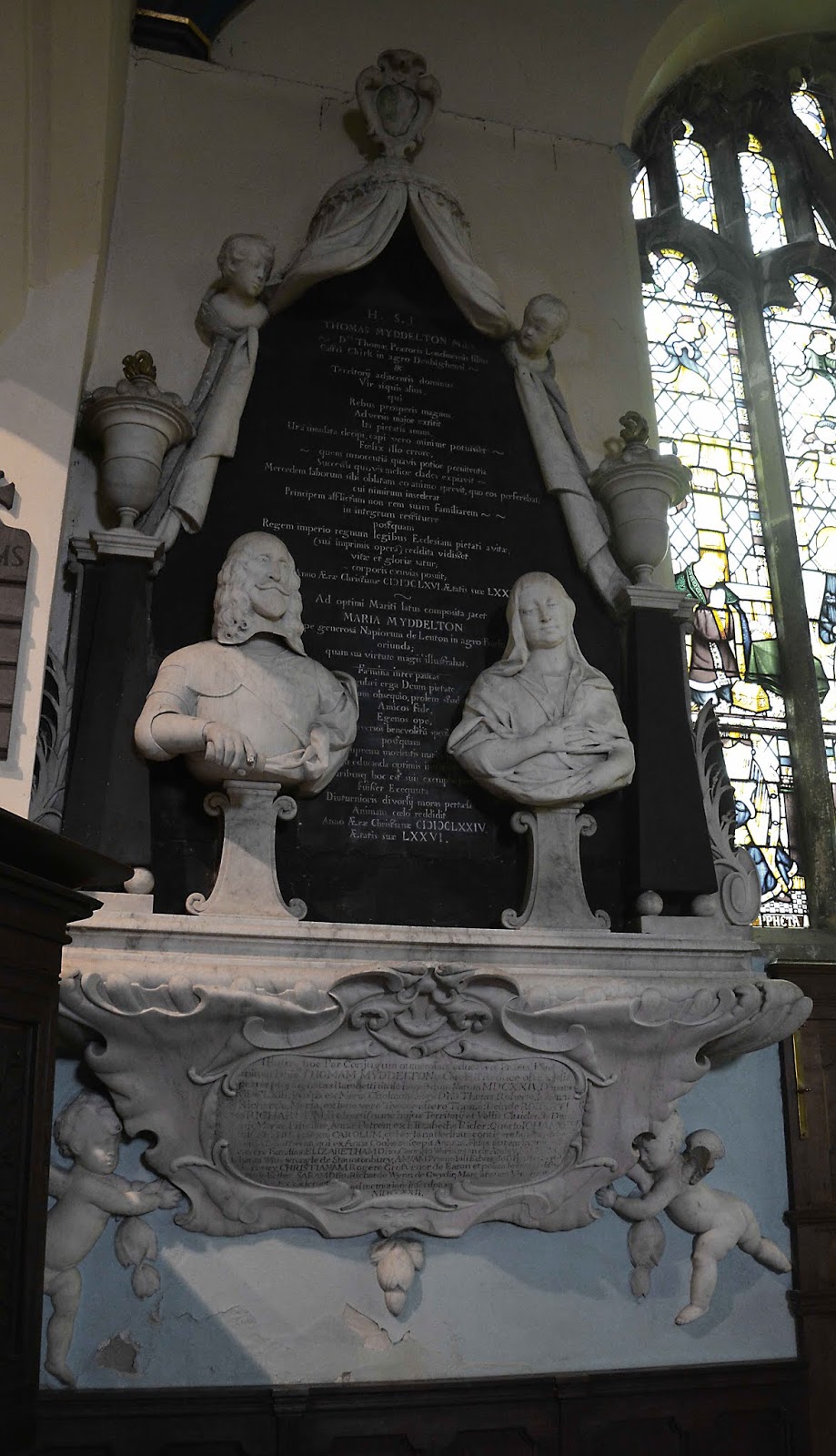 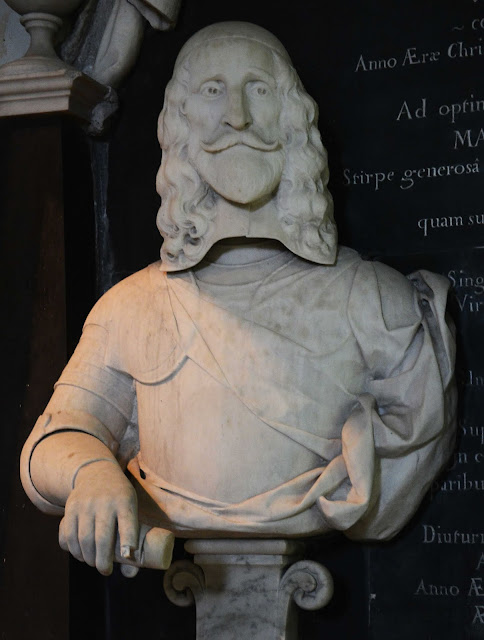 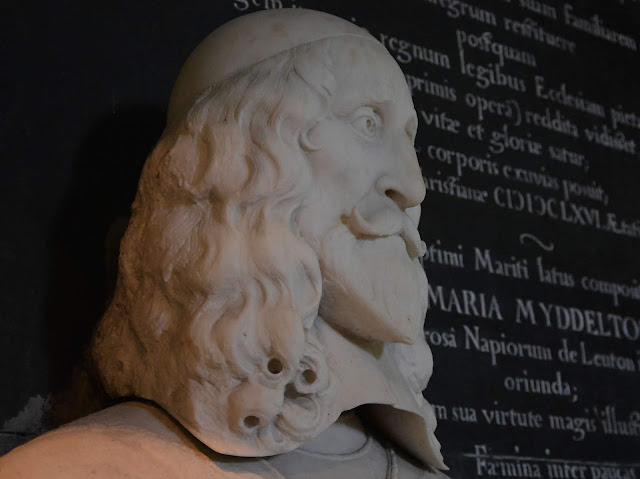 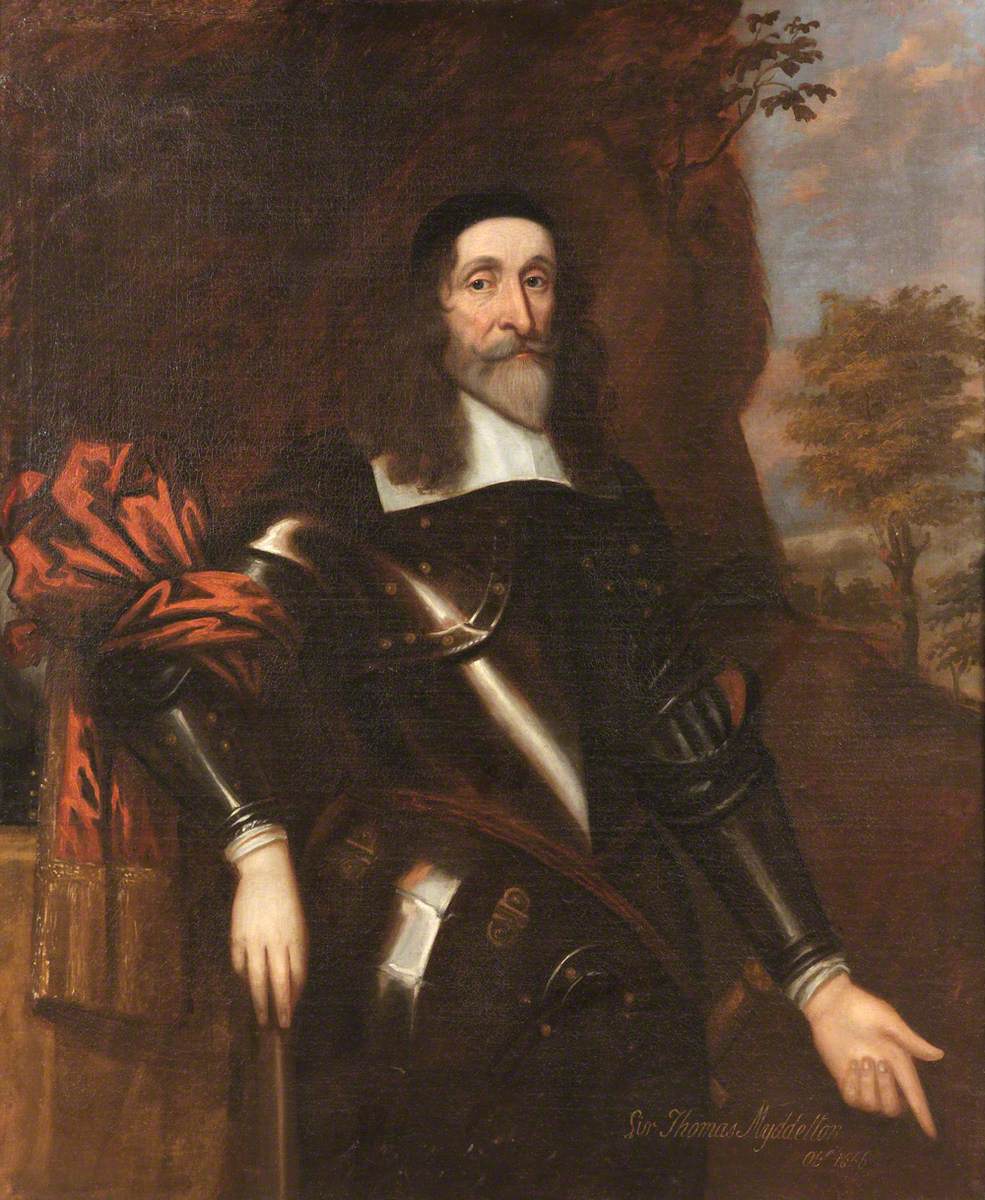 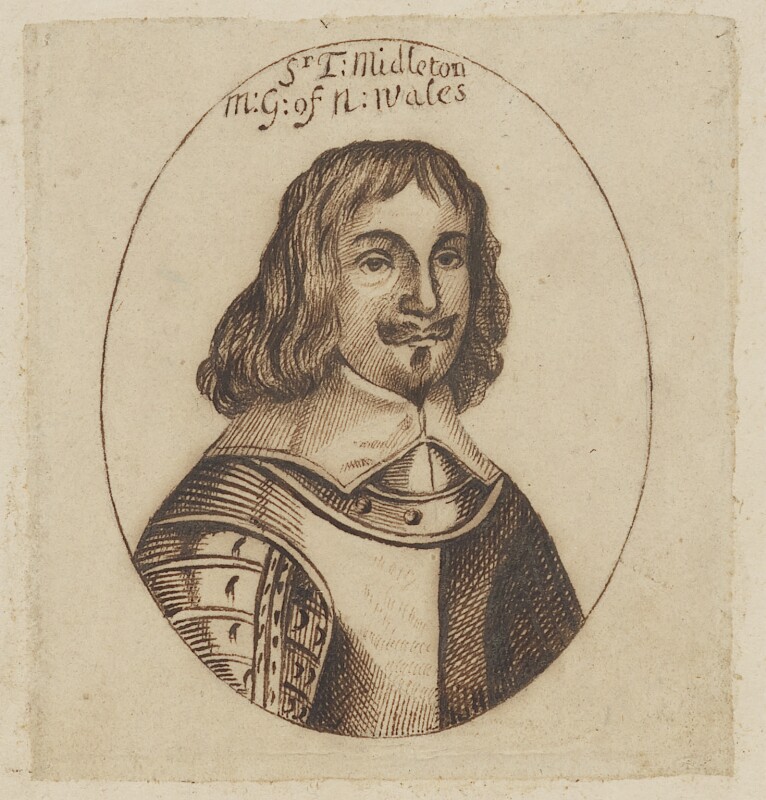 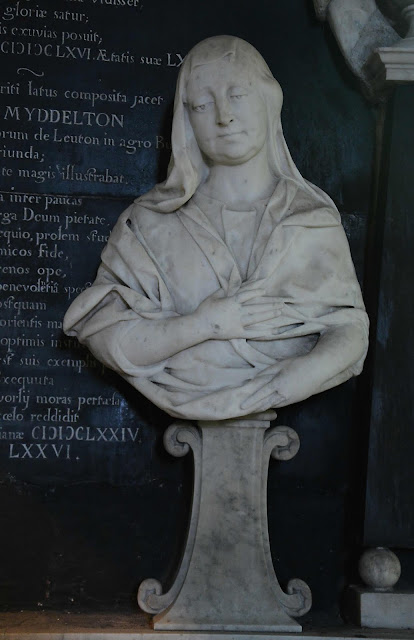 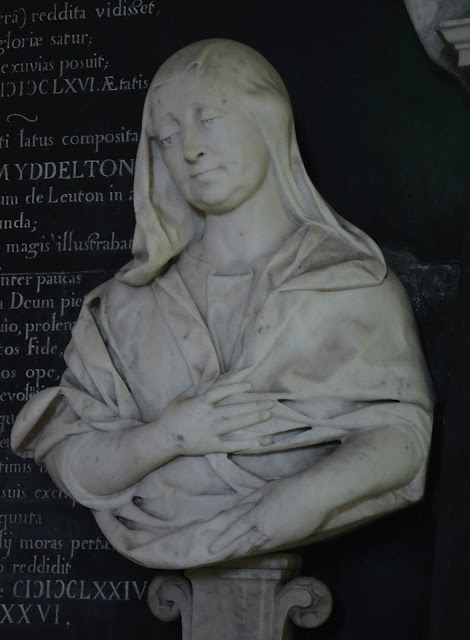 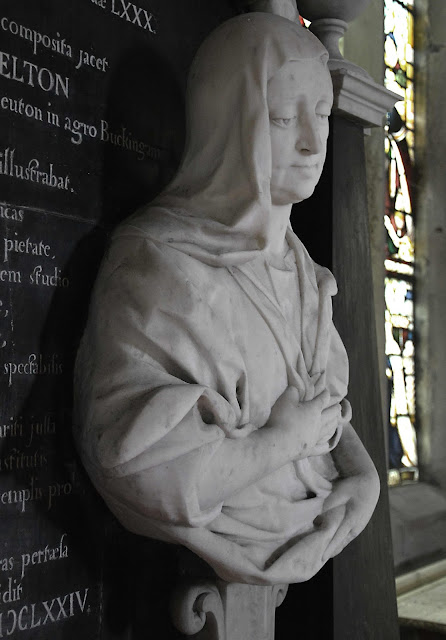 Sir Thomas was the oldest surviving son of Thomas Middleton (1560 - 1631 Lord Mayor of London and Stansted Mountfitchet, Essex (who bought Chirk Castle in 1595) by first wife Hester daughter of Sir Richard Saltonstall of London and South Ockenden and Suzanna Poyntz.

Sir Thomas m. 1 In 1612 Margaret daughter of George Savile of Wakefield who died in childbirth in 1613,

Elected Member of Parliament for Weymouth & Melcombe Regis in 1624-25 and for Denbighshire in1625 and 1640-48.  Thomas was the Parliamentarian counterpart of Lord Capel as regional Lieutenant-General to govern and direct military operations in North Wales and the Northern Marches.  However, his appointment was in name only because the region was entirely under Royalist control. Even Middleton’s estate at Chirk Castle in Denbighshire was in enemy hands after its capture in a Royalist raid in mid-January 1643.

When Major General Myddleton arrived in the region to take up his appointment in August 1643 with troops and artillery from London, he went to Nantwich in Cheshire to join forces with Sir William Brereton, the Parliamentarian commander of Cheshire, Shropshire, Lancashire and Staffordshire, to threaten the Royalists on the northern Marches. They besieged Eccleshall Castle in Staffordshire, which Lord Capel had garrisoned at the beginning of the war, and captured it on 29th August. Brereton and Middleton were then joined by Colonel Thomas Mytton with a regiment of foot from London and marched unopposed into Wem on 11 September, proceeding to garrison and fortify the town.

In mid-October, Lord Capel took to the field at the head of a force of around 4,000 men and six cannon. With most of Brereton's forces concentrated around Wem in Shropshire, Capel advanced from Shrewsbury on the Parliamentarian headquarters at Nantwich in Cheshire. However, the advance faltered when the Royalists were attacked by troops from the Nantwich garrison at nearby Acton. On learning of the Royalist advance, Brereton and Middleton hurried back towards Nantwich with the bulk of their forces, leaving Colonel Mytton with a garrison of 300 foot at Wem. They missed Capel since he fell back to Whitchurch, then made a bold dash on Wem with the intention of overwhelming the garrison. After several skirmishes, Middleton also relieved the siege of Oswestry in July 1644. On 9th December 1644, he was obliged to resign his commission as a result of the Self-Denying Ordinance and was replaced by Thomas Mytton.

Thomas opposed the King’s execution and was excluded from Parliament in 1649.  He then changed sides and joined the Cheshire Rising in 1659.  The uprising was defeated and Middleton forced to go into exile.  He returned to England after the Restoration and died in 1666.

. Despite the expense and privations of the civil wars, Thomas was on his death one of the richest men in the kingdom. He had doubled the size of his estate he inherited, buying Ruthin Castle and profited from rents, cattle dealing, coal and iron mining.

"Thomas Myddelton knight son of Thomas Lord Mayor of London, proprietor of the Castle of Chirk in the County of Denbigh and of the adjacent territory who great in prosperity showed himself greater in adversity, so grat a lover of piety that he could be declared by falsehood, but could not be overcome by upright means blessed in an error which was expiated by a penitence stronger than any innocence by a manifesto nobler than any success. The offer of a reward for his labours he despised in the same spirit as that in which he performed them. Upon his mind this fact weighed more than any that the resources of his family could not restore to his afflicted Prince the whole of his power. After that he had seen (chiefly owing to his labour) the King restored to his rule, the kingdom to its laws, the church to its ancient piety, content with his measure of life and glory, he laid aside this earthly frame in the year 1666 of the christian era, at the age of 80.

By the side of her excellent husband lies buried Marie Myddelton of the noble family of the Napiers from Luton in Buckinghamshire which she made still more illustrious by her virtue. A soman with but few equals renowned for her singular piety towards God, her obedience to her husband, her zeal to her children, her loyalty to her friends, her aid to the needy, her benevolence towards all men; when she had fulfilled the last behests of her dying husband in educating her children after the best and most just method, that is by her own example having borne with weariness the delay of the long separation, gave up her soul to heaven in the year of the christian era 1674 aged 76"

Cartouche - "This illustrious couple brought up a numerous offspring; their first born Sir Thomas Myddelton honoured with the title of baronet by Charles ll on his return from fighting on the side of the King; born 1624, died 1663 having by Mary Cholmondley the following children; Thomas, Robert , Richard, Mary. And by Jane Trevor a second Thomas secondly Robert next Richard the father of Robert (the present owner of this estate and the Clwyd Valley).

John, Mary, Priscilla and Anne by Elizabeth Rider; fourthly John, fifthly Joseph, sixthly Charles to whom by Jane Needham there were given Jane and Altharnia , seventhly Timothy who by Ann Cook begot Anne and daughters who married into distinguished families - Elizabeth to George Warburton of Aveley, Miriam to Sir John Whitwrongle of Stauntonbury, Anne to the most noble Edward Lord Herbert of Chirbury, Christiana to Roger Grosvenor of Eaton and afterwards to John Edisbury of Erthig, Sarah to Sir Richard Wynne of Wydir, Margaret while still a virgin they gave to God. Engraved to their memory 1722"

1677. Monument by John Bushnell made in London and sent by water to Chester and thence by cart - carved aided by portraits sent from Chirk Castle (see portrait above). 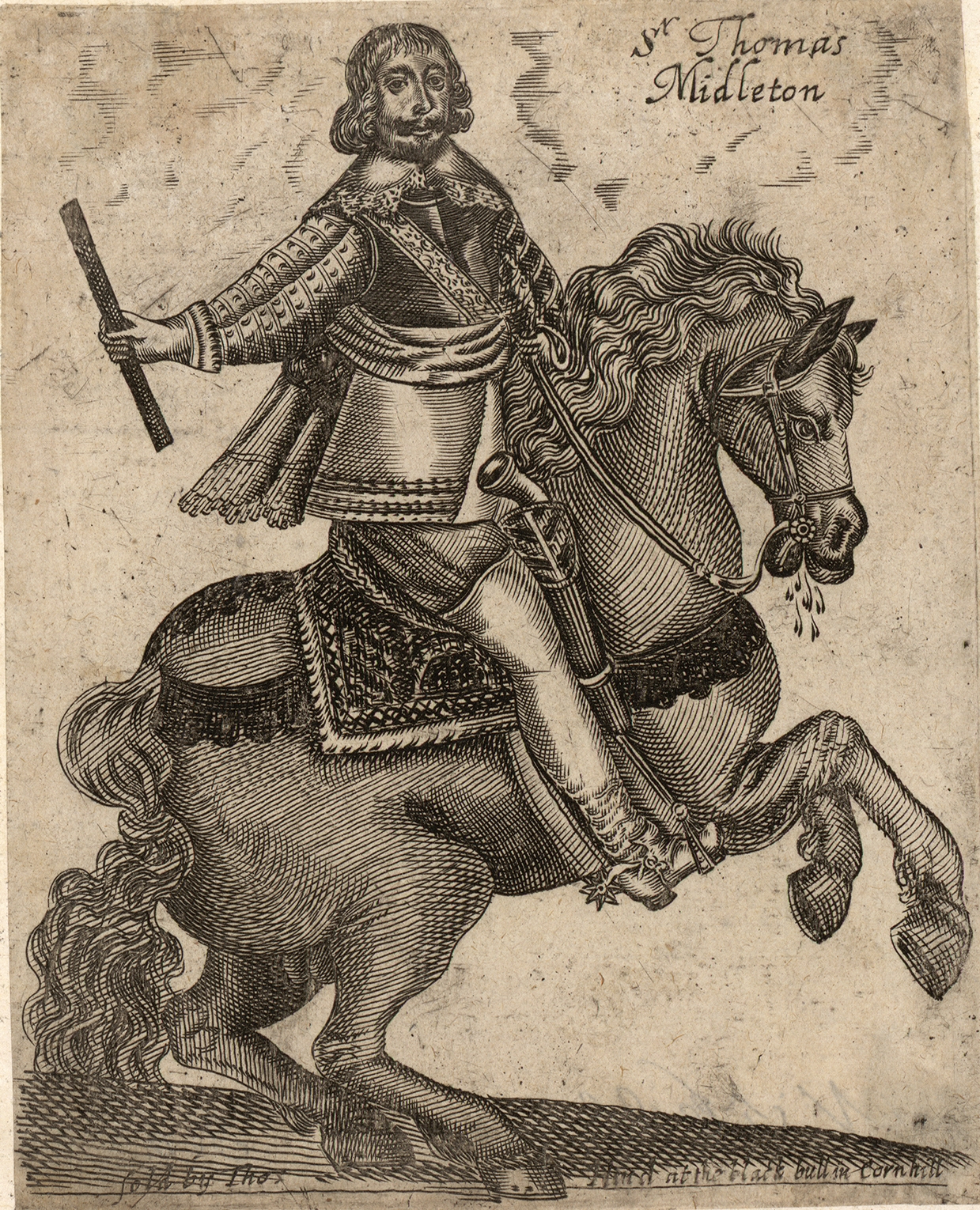 An image from a set of 8 extra-illustrated volumes of A tour in Wales by Thomas Pennant (1726-1798) that chronicle the three journeys he made through Wales between 1773 and 1776. These volumes are unique because they were compiled for Pennant's own library at Downing. This edition was produced in 1781.

The volumes include a number of original drawings by Moses Griffiths, Ingleby and other well known artists of the period.

For a useful biog see - https://en.wikipedia.org/wiki/Thomas_Myddelton_(younger). 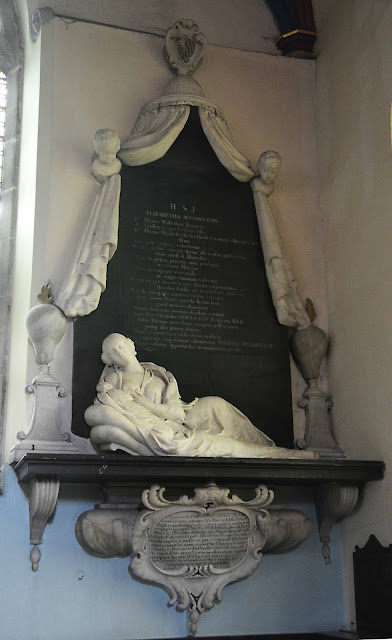 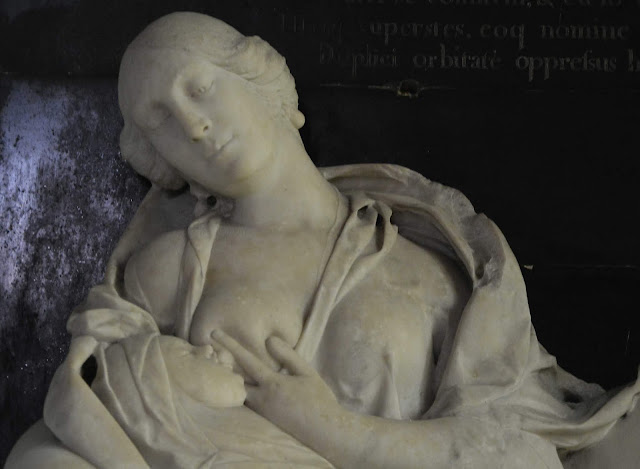 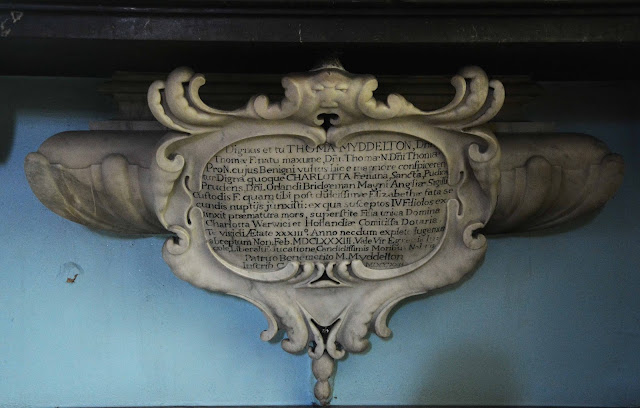 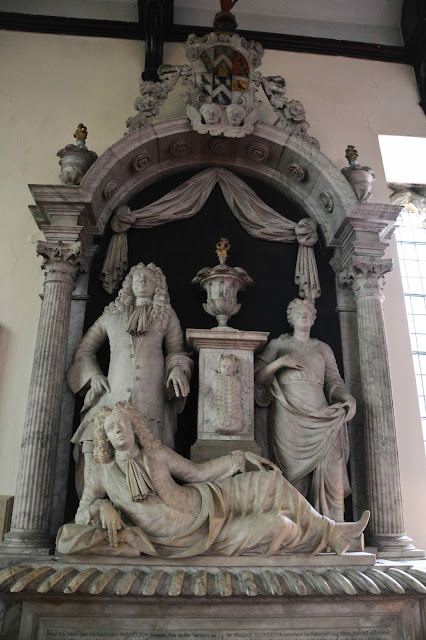 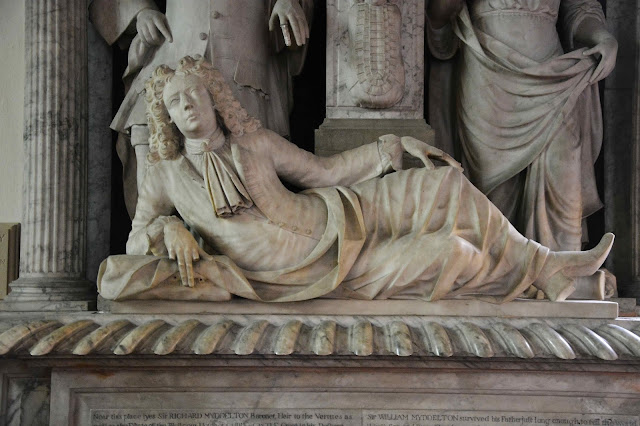 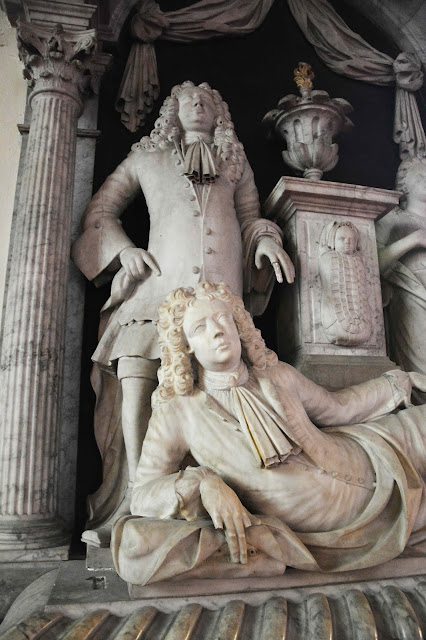 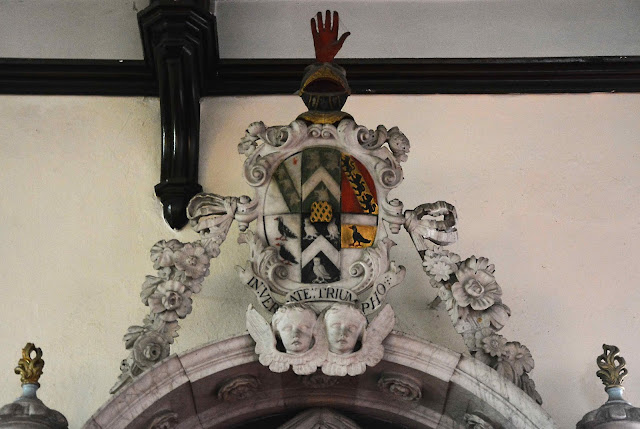 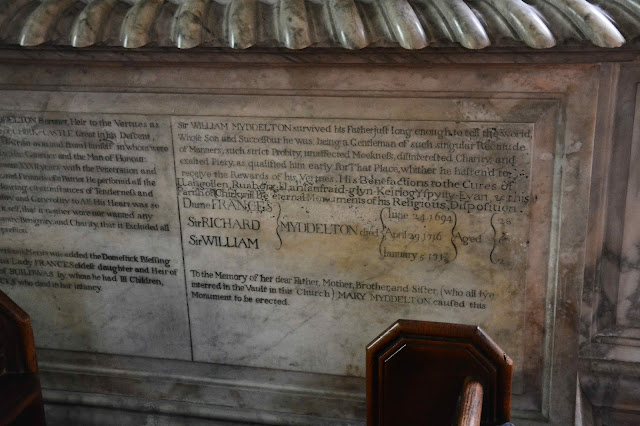 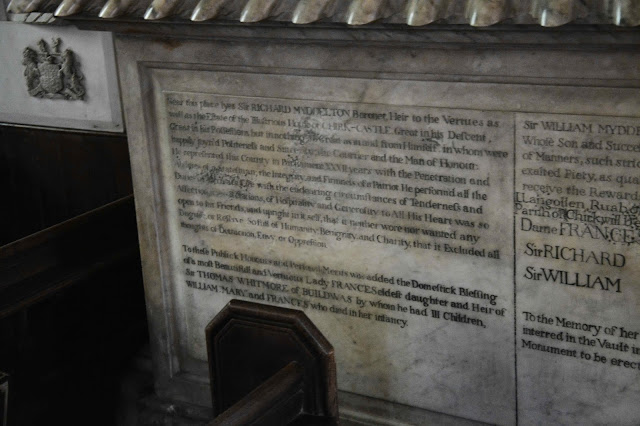 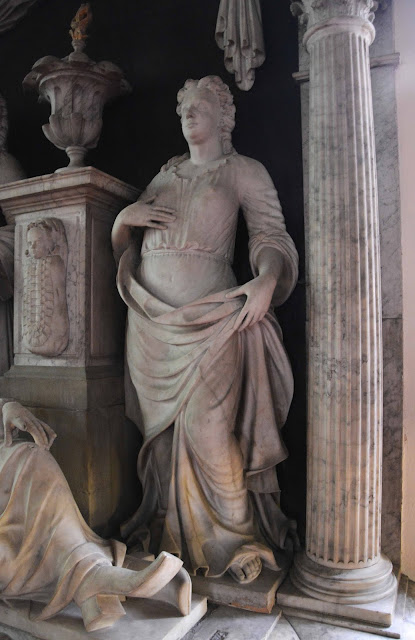 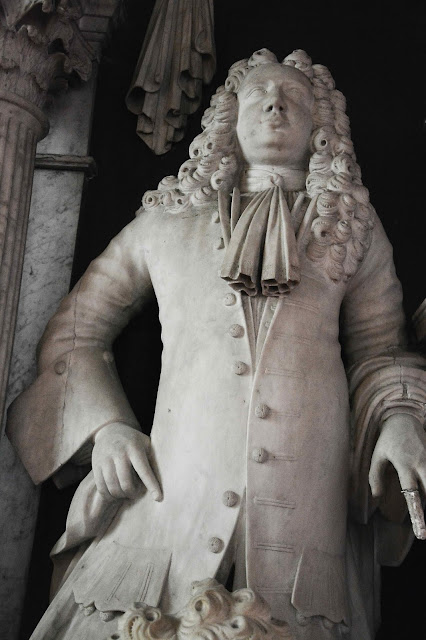 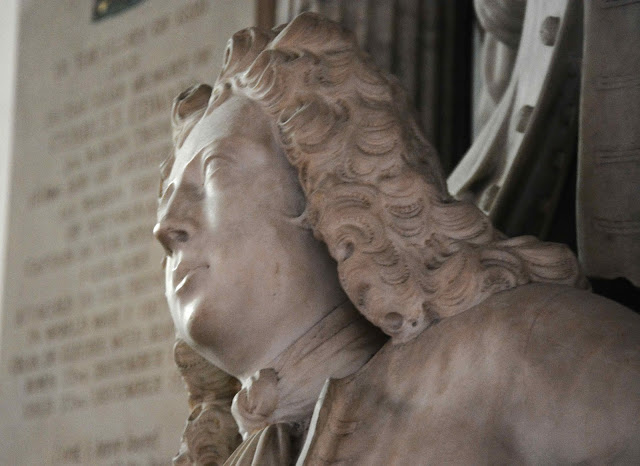 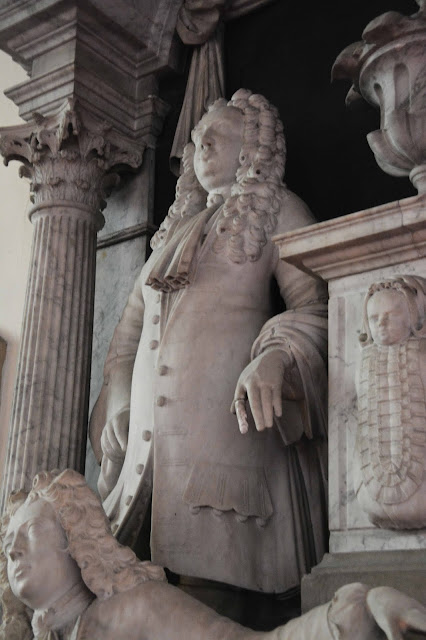 Monument to Sir Richard Myddleton, his wife (who died early at the age of 28), and between their two standing figures an urn with a relief of their infant daughter.

In front semi-reclines their son William who died aged 25 and the inscription suggests he only survived his father for a very short time. All is of c1718-22 and erected by the only surviving sibling Mary. At the top of the monument can be seen the "red hand" which forms part of the Myddleton coat of arms.

All photographs by the author - apologies for the poor quality.

There is very little information available for Robert Wynn of Ruthin d. (1731), but it it seems a coincidence that there is another statuary called Wynn.

Robert Wynne was born in Llanbedr about 1655. He was apprenticed to Peter Roberts, a member of the Worshipful Company of Masons of London. He returned to Ruthin by 1707 where he had a sculptor's workshop, the 'Elabatory', as it was called, in Well Street. He died a pauper and is buried at Overton in Maelor. 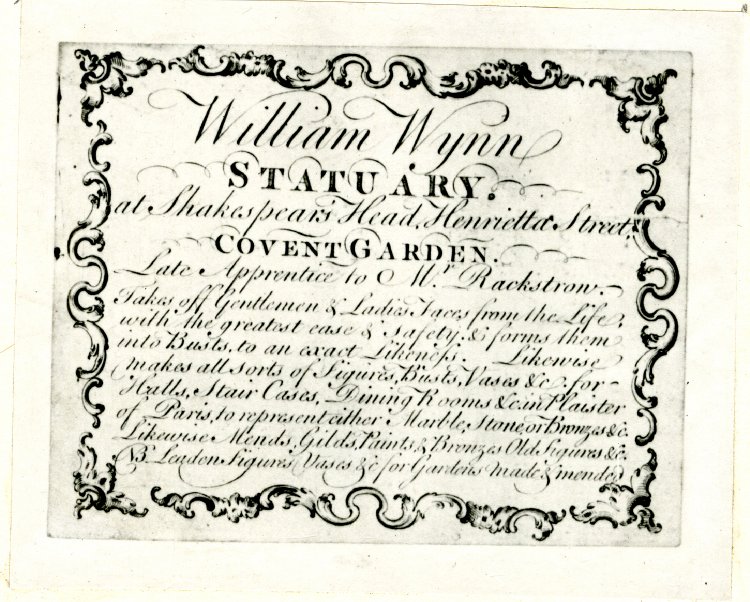 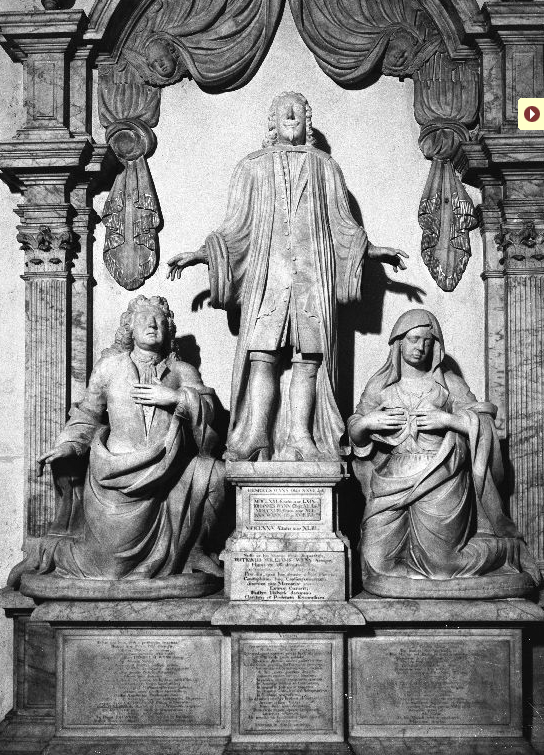 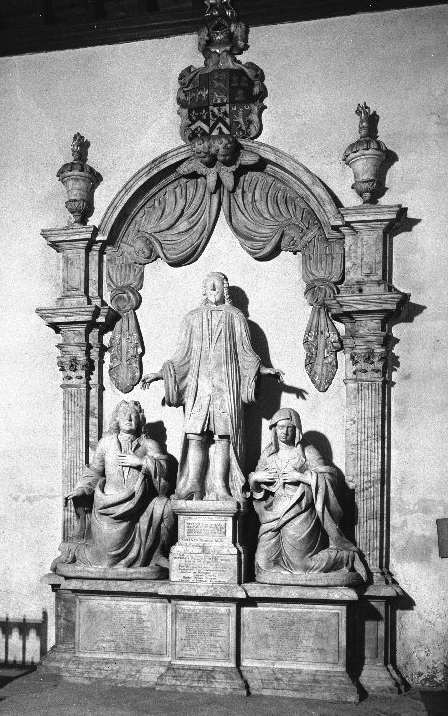 Philip Yorke of Erddig writing in 1799 calls it: ' a mass and massacre of marble, ludicrous to look on'.

The Articles of Agreement dated 10 November 1719 between Watkin William Wynn of Wynnstay and Robert Wynne of Ruthin, Statuary, are for the erection, for a sum of £450, of three marble monuments.

Unfortunately the church was locked when I visited and no one answered the phone number provided. These photographs are the best available online from 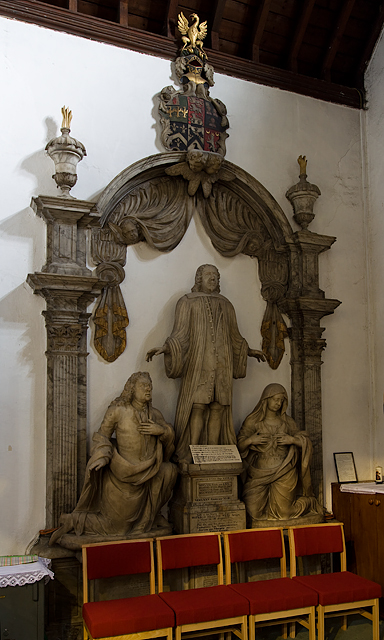 Posted by David Bridgwater at 10:19