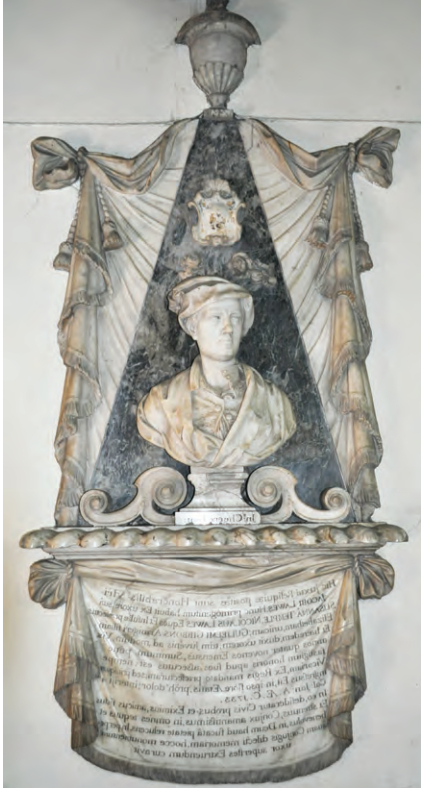 The St Nicholas Chapel (western wall) boasts an elaborate memorial to the Hon. James Lawes, son
of Sir Nicholas Lawes, a former Governor of Jamaica and benefactor who donated the intricate brass
candelabrum to the church. The Hon. James Lawes was only thirty-six years old when he died in 1733, and his widow, Elizabeth née Gibbons contracted John Cheere to provide the monument to him.

Previously Cheere had provided the monument to her mother Deborah Gibbons

One of the treasures of the church is the brass candelabrum by the west door which was donated in 1706 by Sir Nicholas Lawes. Sir Nicholas was later to become governor of Jamaica (1718-1722).

Elizabeth Lawes later Home, Countess of Home (née Gibbons; 1703/04 – 15 January 1784) was a Jamaican-English heiress. She was born in Jamaica in 1703 or 1704  She was the only child and heir of William Gibbons and his wife Deborah. William Gibbons was a West Indies merchant and one of the island's original English planters. Little otherwise is known of him.

Her mother Deborah Favell was the daughter of John Favell, a member of Jamaica's Council and Assembly.

In 1720 Elizabeth, then approximately sixteen years old, was married to the twenty-three-year-old James Lawes, son of Sir Nicholas Lawes, the island's governor. Nicholas Lawes was also a wealthy planter who had introduced the island's first printing press as well as the planting of coffee from about 1718.

James Lawes was perhaps the most eligible bachelor in Jamaica. He was often in dispute with the island's governor Henry Bentinck, 1st Duke of Portland (his father's successor to the post) and would not allow his wife to pay her respects.

The Lawes eventually moved to London, where he received the post of lieutenant governor for the island. However, Lawes died in 1734, several months before he could officially begin the position. They had no children.

Elizabeth inherited a great fortune upon James' death, possessing a jointure of £7,000 and 5,287 acres. She also owned many prosperous Jamaican estates from her father.[10] She commissioned English sculptor John Cheere to construct a bust in her husband's honour. The resulting monument, the largest yet to be shipped to the West Indies, was placed in Lawes' home parish of Saint Andrew.

Already rich from her merchant father, she married James Lawes, the eligible son of Jamaica's governor, in 1720. They moved to London, and his death in 1734 left her a wealthy widow. Elizabeth married the spendthrift William Home, 8th Earl of Home in late 1742. He abandoned her soon after and she spent her next years living an extravagant lifestyle; Elizabeth earned the nickname "Queen of Hell" for her "irascible behaviour and lavish parties.

Posted by David Bridgwater at 09:06