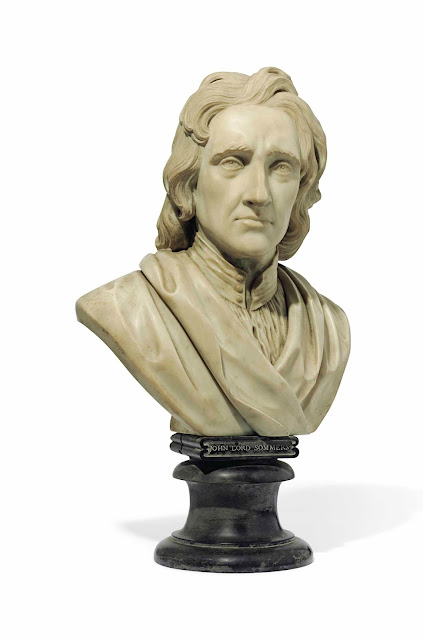 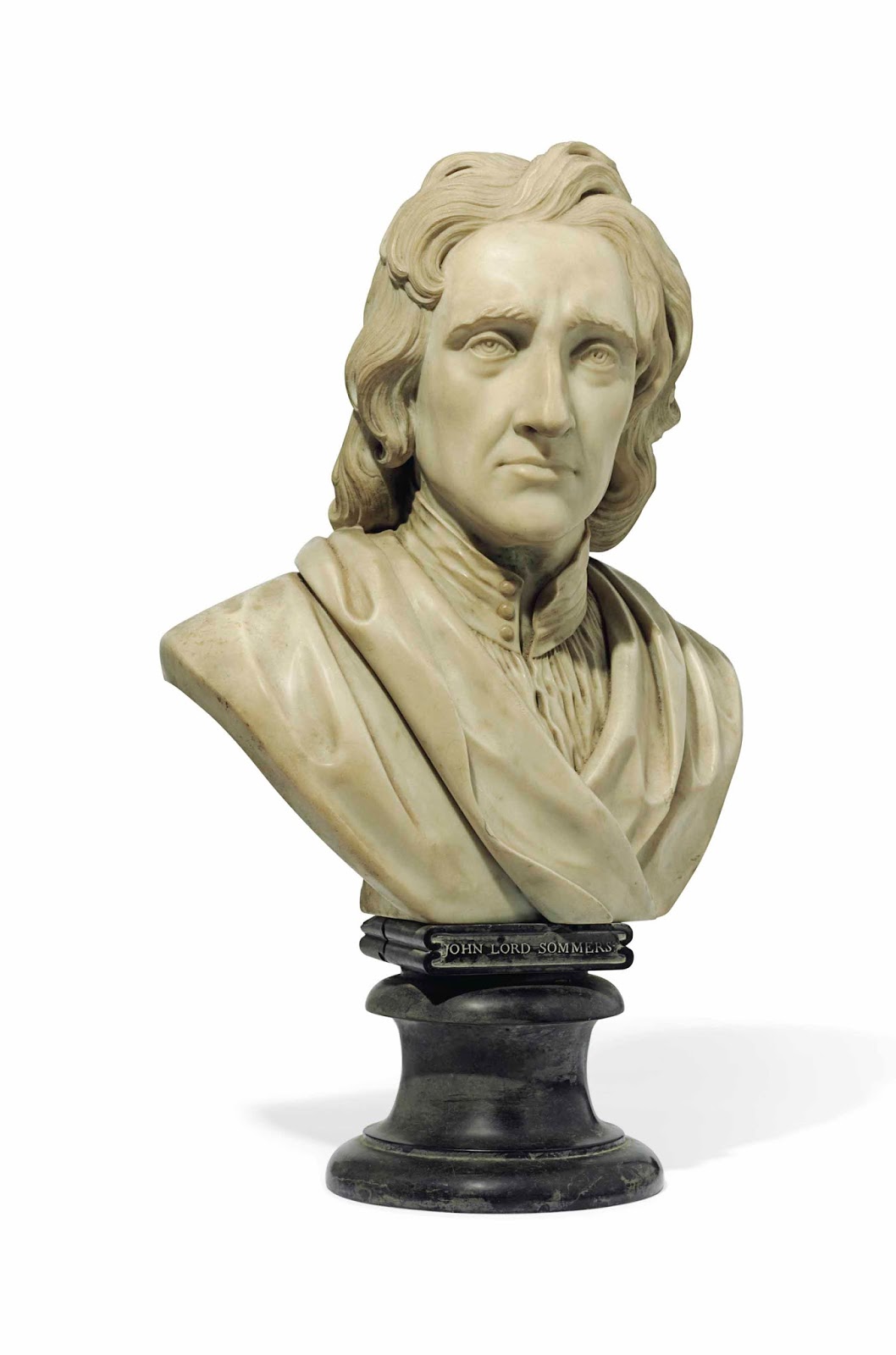 It is worth posting a copy of Christie's Sale Catalogue entry for this bust if only to show wrong the auction rooms can be on occasion.

This majestic bust depicts the great English philosopher and physician John Locke, regarded as one of the most influential figures of the Enlightenment. Locke's theory of the mind is often cited as the origin of modern conceptions of identity and the self, and it is this self-reflective consciousness and empirical outlook that the artist has so successfully captured in marble.

The flowing and soft nature of the carving evident here were hallmarks of Guelfi's finest works, the majority of which were commissions from the aristocracy that came after his move from Rome to London in circa 1714 to work for Richard Boyle, the 3rd Earl of Burlington and creator of Chiswick Villa. The current bust was almost certainly in the 5th Earl of Hardwicke's collection at Wimpole Hall, Cambridgeshire. In an inventory of 1881, in the Ante Library, there is a listing which notes a 'A white marble bust of Shakespeare on scagliola bust supports...Ditto ditto Lord John Sommers ditto.' Although it is not known when the bust of Locke was put onto the present - incorrect - socle, it is likely that the 1881 inventory refers to the present bust.
There is a very similar bust of Locke, carved by Guelfi, in the Royal Collection at Kensington Palace, which is part of a set of five busts commissioned by Queen Caroline in the early 1730s. Despite Vertue writing in 1731 that Guelfi had been commissioned to carve these busts, they were long attributed to the Flemish emigre Michael Rysbrack. However Rysbrack himself wrote a letter to his patron Sir Edward Littleton in 1755 in which he states 'I did not make the bust of Dr Clark...it was done by Mr Guelphi an Italian who is dead'. The authorship of the busts was conclusively affirmed by Gordon Balderston in his article on the subject of the commission in 2008 (op. cit.).
Cataloguing & details
Provenance 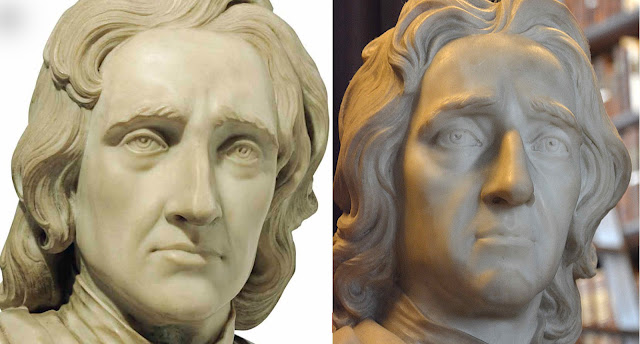 The Christie's Richardson bust and the Trinity Library, Dublin busts of Locke
presented side by side for comparison.

In 1743 £500 was bequeathed "for the purchase of busts eminent for learning to adorn the library" by Dr Claudius Gilbert, the Vice Provost.

One of 14 busts ( 6 ancients - Homer, Socrates, Plato, Demosthenes, Aristotle and Cicero; 6 moderns - Shakespeare, Bacon, Milton, Newton Locke and Boyle and 2 benefactors Archbishop Ussher and the 8th Earl of Pembroke) contracted to Scheemakers, 6 of which were it appears were subcontracted by him.

The Shakespeare bust is signed Peter Scheemakers in full and seven others are signed PS. or P.S. Ft - Demosthenes, Cicero, Milton, Pembroke and Locke.

It has long been  suggested that Roubiliac was responsible for these 6 busts, but none of them are signed and to my eye they lack the extraordinary intensity of many of Roubiliac's busts - I would suggest that these busts, attributed to Roubiliac, were probably from his workshop in St Martin's Lane, but carved by a lesser sculptor - currently my favourite candidate for this work is John van Nost III, who arrived in Dublin in 1748/9 and perhaps going to Ireland initially to set up these busts.

These busts all share the same style of socle including the Roubiliac bust of  Jonathan Swift, suggesting that they were perhaps added later in order to unify the set.

There is a receipt at the College from the joiner William Keating for the payment of 2s 8 1/2d for putting up busts in the long room in 1746 (see Trinity College Library a History by Peter Fox, Cambridge 2014).

The majority of these busts must have been in place by 1749 when Faulkners Dublin Journal  21 March 1749 reports that the extra bust of Jonathan Swift who died in 1745, not included in those paid for by the original Gilbert bequest.

These busts are mentioned in Horace Walpole's account of Roubiliac, which stated that the sculptor owed the commission 'to execute half the busts in Trinity College, Dublin' to a recommendation from Sir Edward Walpole but this should probably not be taken too seriously.

Scheemakers work was already known in Dublin as he had previously supplied the church of All Hallows at Drumcondra in the North of the city with an effigy of Marmaduke Coghill in 1743. 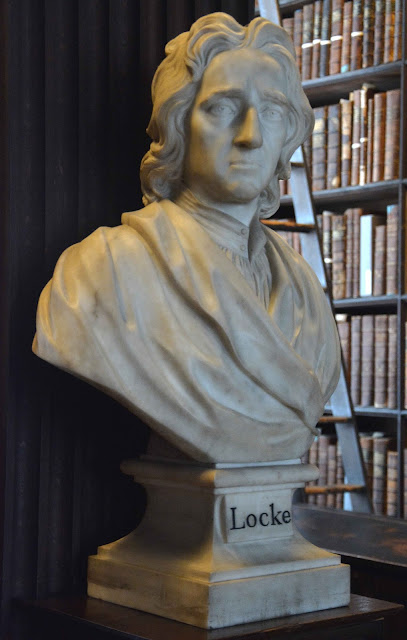 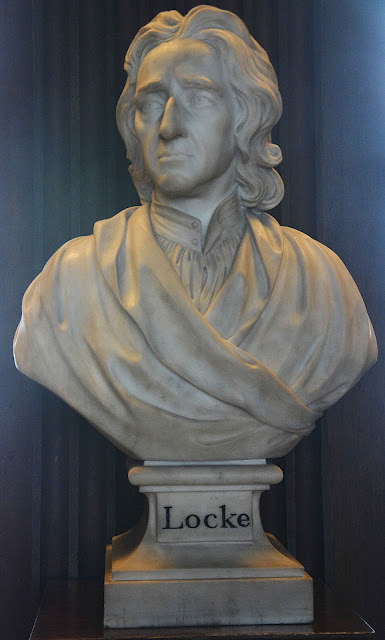 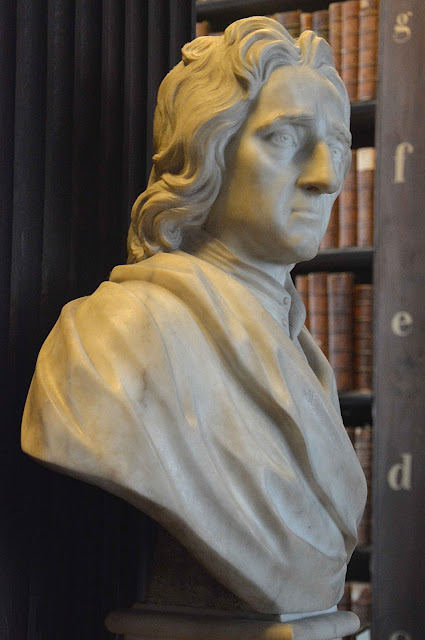 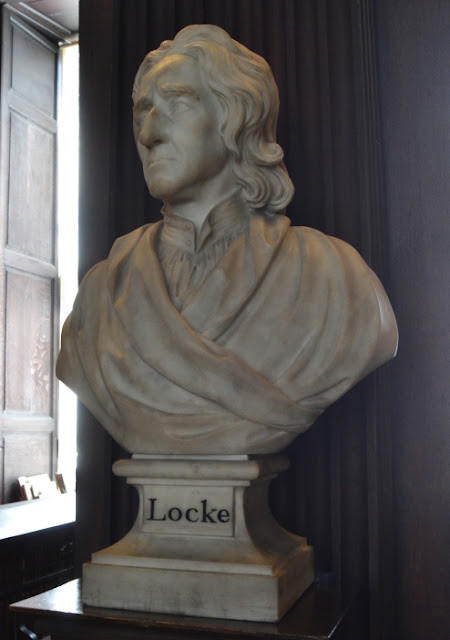 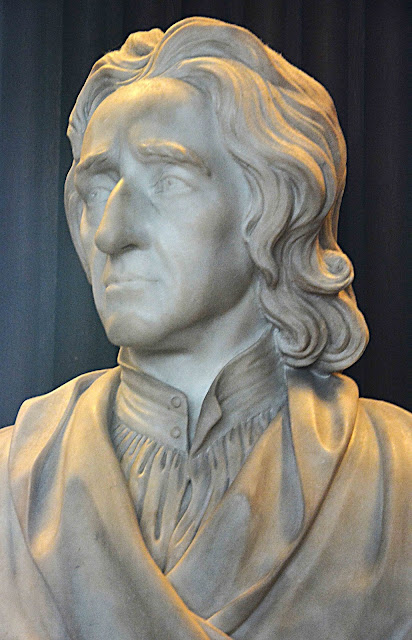 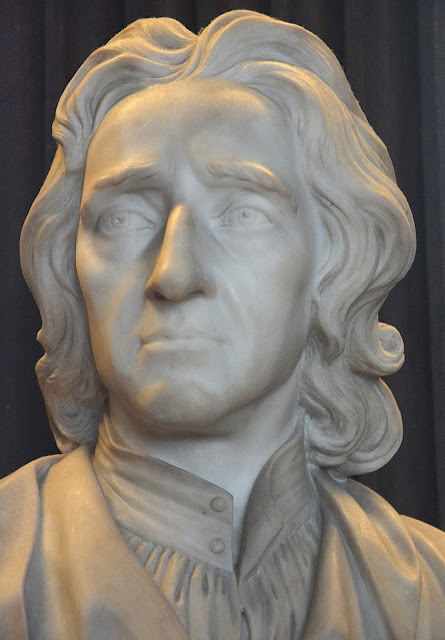 All photographs of the Trinity Library bust of Locke taken by the author in very poor light.

For a useful of the Trinity College, Dublin, Library Busts, sub contacts and the maufacture of portrait busts see -

The Making of Portrait Busts in the Mid 18th Century: Roubiliac Scheemakers and Trinity College Dublin. by Malcolm Baker.

This bust is one of several at Sudbury. 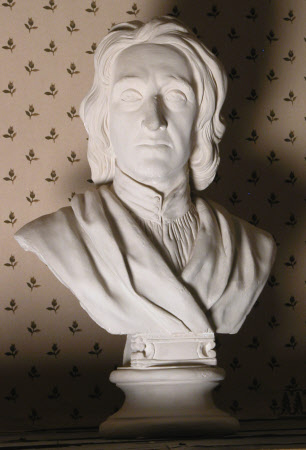 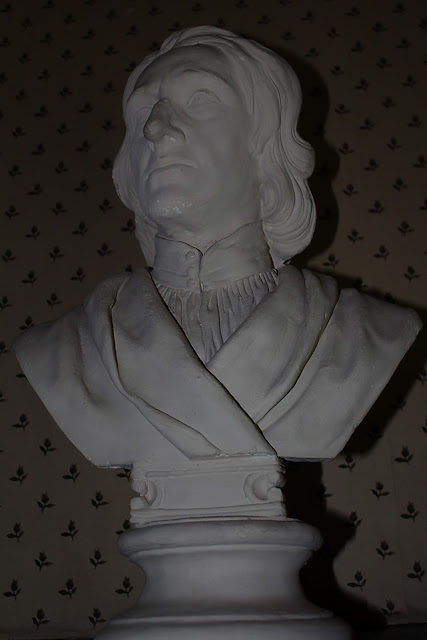 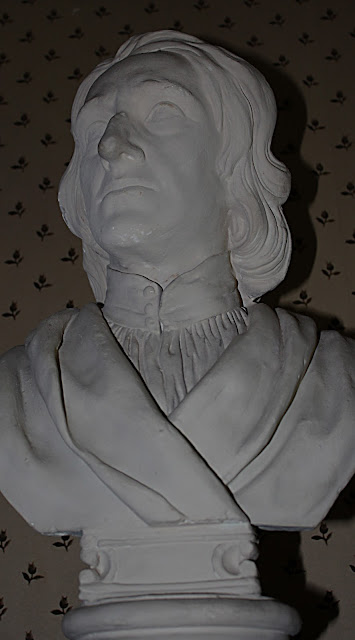 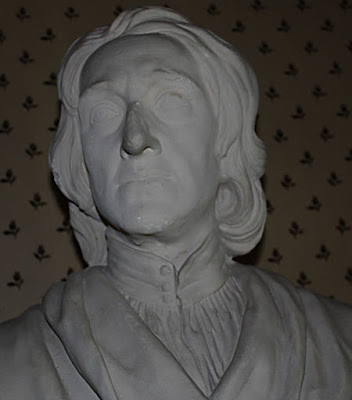 I am very grateful to Emma Lipscombe, House Steward at Sudbury Hall, Derbyshire for providing me with close up photographs of the five plaster busts by Shout at Sudbury.

These are - An as yet unidentified man (with a Roubiliac Pope type shirt).
John Locke after Scheemakers, Francis Bacon (as the documented Cheere version from Kirkleatham), Joshua Reynold (after Ceracci), Edmund Spencer (Cheere type), a classical man. 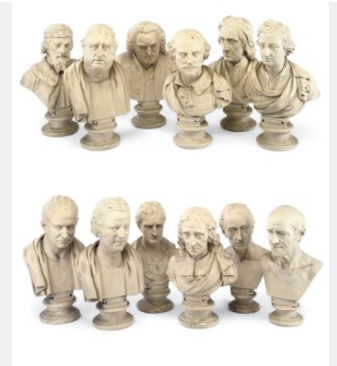 with the eared support on socle

From a set of Plaster busts by B&R Shout,
sold by Christie's at the Faske, The Scottish seat of the Gladstones Sale of 7 May 2008. Lot 161.

For students of the works of the plaster shops of 18th and early 19th century plaster portraiture this is a very useful reference group - particularly as it shows King Alfred (after Rysbrack), Shakespeare, Locke (after Scheemakers), Dryden (after Scheemakers), Newton, Milton and Pope (after Roubilliac or possibly Nollekens after Roubiliac) which are all based on mid 18th century sculptures.

It is my intention to put a study together on the works of John Cheere with special reference to his portrait busts in due course.

"Recorded in Holden's London Directory (1806, 1807) as 'statuaries, masons and plaster figure makers' the firm of Benjamin Shout, and his son Robert (fl. 1778-1823) operated from a studio and spacious showrooms at 18 High Holborn. A bill-head dated 1806 lists their production to include 'several hundreds of figures from the Antique, and likenesses of distinguished personages' (T. Clifford, 'The plaster shops of the rococo and neo-classical era in Britain', Journal of the History of Collections, 1992, vol. IV, no. 1, pp. 63-64).

Probably purchased for Seaforth House by Sir John Gladstone as part of his fervent acquisition of objet d'art around the time he was making extensive alterations to the Library in 1817, the present plaster busts of luminaries would have been a fashionable addition to the where they have henceforth safeguarded the reading matter of many a studious Gladstone.

Posted by David Bridgwater at 10:44