The Cossins of Redland Court Bristol

The Cossins and Innys Families of Redland Court, Bristol.
in the 18th Century. 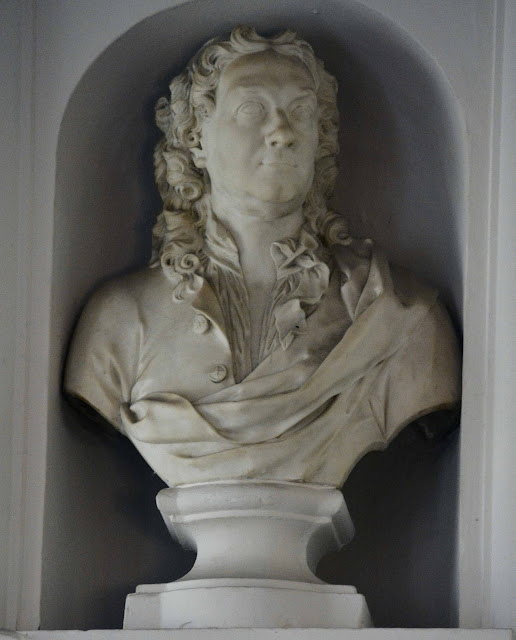 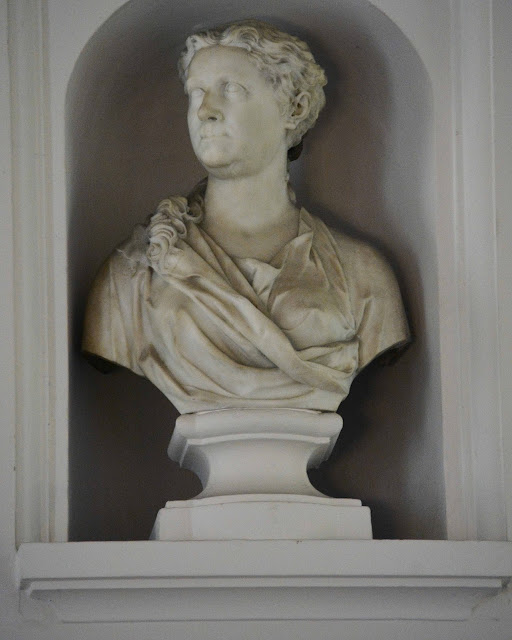 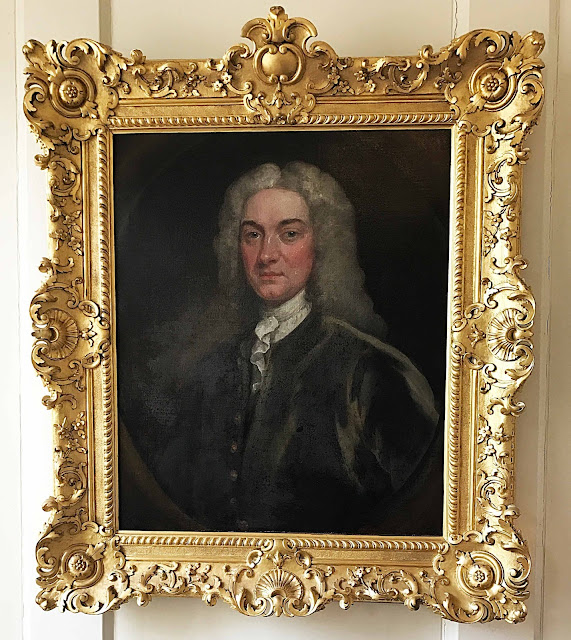 Oil on canvas
743 x 615 mm.
This pair of portraits have been attributed traditionally to John Vanderbank (1694 - 1739).
Both in very good matching carved frames of the period - which have been regilded

Currently these portraits are at Redland Court on loan but due to return to Redland Chapel shortly. Redland Court has recently been sold to developers and the School is being amalgamated with another private girls school.

There is a paper label on the back perhaps in the hand of John Innys (Eustace):

"John Cossins of Redland Court Esqr. Son of Roger Cossins of London by Martha one of the five Daughters and Co-Heiress of Francis Saville of London Esqr. He was born in London Feb. 20. 1682 Married Martha the youngest daughter of Andrew Innys of Bristol Gent. Feb. 5. 1714 Bought the mansion of Redland Court Jul. 18. 1732 Rebuilt the mansion House which was finished July 14. 1735 paid his Fine for Sherriffe of London and Middlesex June 23. 1737 Built the Chapel at Redland which was opened Oct. 5. 1743 was appointed High Sherriffe for the County of Gloucester Feb. 25. 1755 Was sworn into that office Mar. 10. 175: but was represented by his Brother in Law John Innys. He departed this Life at Redland Court April 19. 1759Aged 77. And was interred in the Vault under the Communion Table Post Funera Vertus. J. Vanderbank P."

The copy of the Entombment by Anibale Carracci  formerly at Houghton, bought by Catherine the Great and subsequently destroyed in a fire in the Hermitage in St Peterberg is also attributed to Vanderbank.

Shiercliff in The Bristol and Hotwell Guide 1793 ascribes the Entombment to Moses Vanderbank the brother of John - (Eustace - I couldn't find a ref to Moses V in a copy of the Guide available online
see - https://babel.hathitrust.org/cgi/pt?id=coo1.ark:/13960/t55d9hq78;view=1up;seq=7

Eustace notes that given the death of John Vanderbank in 1739, a year before work began on the Redland Chapel the attribution to Moses Vanderbank (fl 1720-45) is more likely. 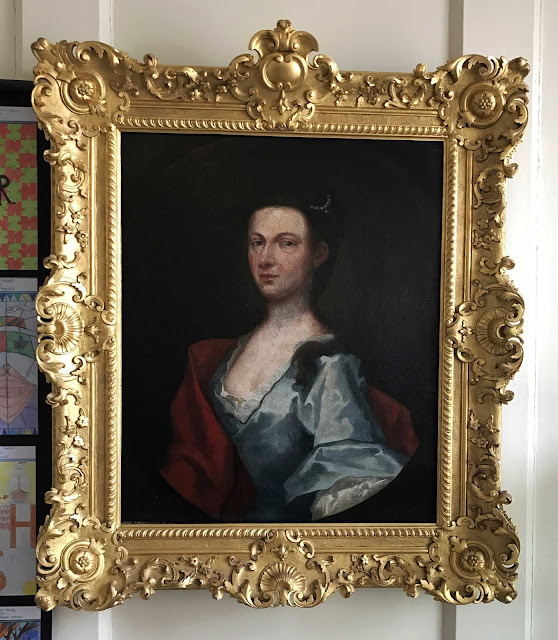 These portraits have been attributed in the past to John Vanderbank (1694 - 1739).
Both have the scrubbed appearance of being over restored, particularly that of Mrs Cossins. 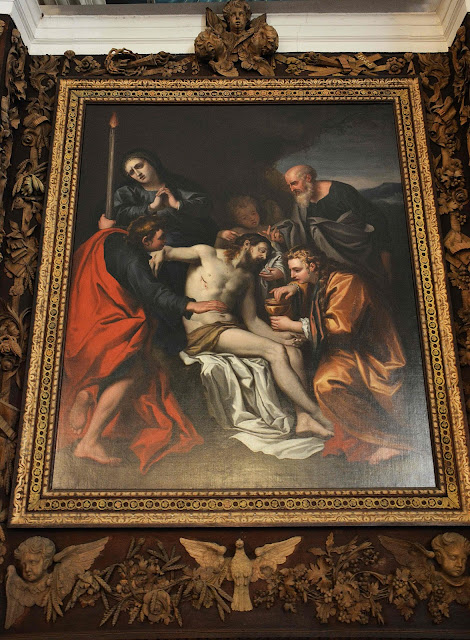 The copy in the Redland Chapel of the Entombment by Anibale Carracci  formerly at Houghton, bought by Catherine the Great and subsequently destroyed in a fire in the Hermitage in St Peterberg and attributed to Vanderbank.

Vanderbank was fairly prolific and given to having a good time but I publish these images to indicate that he and Rysbrack were probably fairly close acquaintances.

Printed Stone: Sculpture and its Images.


A workshop at the Institute of Advanced Studies, University College London, 12 June 2017

Organized by by Brigid von Preussen and Cora Gilroy-Ware.

This portrait posted out of devilment.

Drawing possibly by Vanderbank of an Artist
Squared for possible enlarging.

380 x 280 mm.
Croft Murray suggests that this is a reduced copy of a painting signed and dated Vander Banc Fecit 1729.
see -http://www.britishmuseum.org/research/collection_online/collection_object_details.aspx?objectId=752608&partId=1&searchText=Vanderbank&page=2 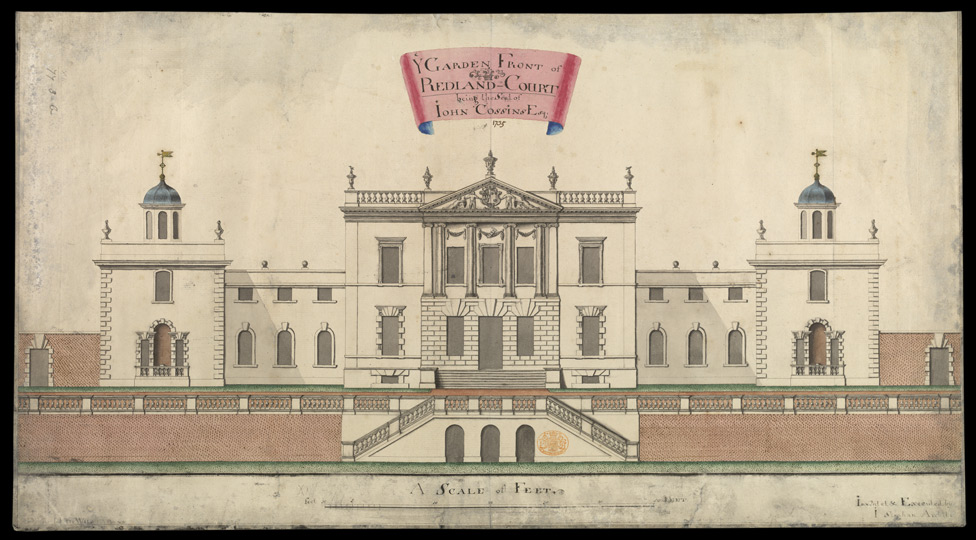 
Gerry Nichols notes in 2013 on the BL Website - This original frontage was changed in 1747 by the addition of two extra bays making the proportions 2/3/2. The original 1/3/1 proportions are still visible on the rear elevation. The building is still in use as Redland High School for Girls.
Strahan probably came to Bristol from Scotland - the Innys (Innes) family - aristocratic from Morrayshire were also originally from Scotland. 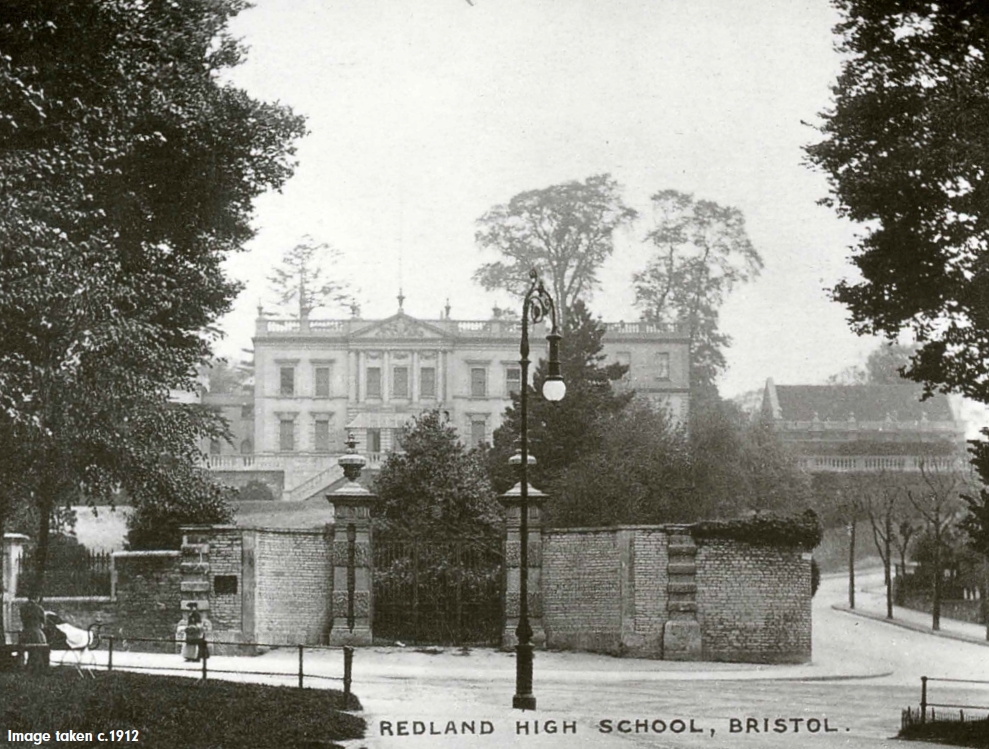 Redland Court, Redland in about 1912 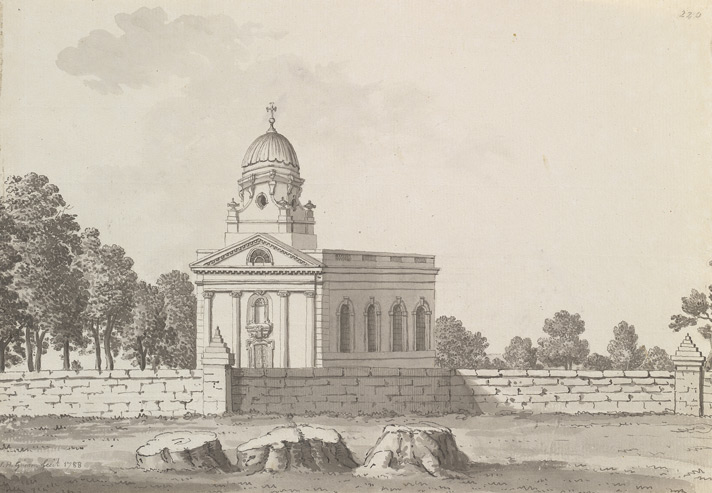 "Most of the interior carvings were completed when the Chapel was opened as Thomas Paty the carver submitted his invoice for £106 8s 0d on 4 June 1743. A few details such as the pulpit canopy (1744) and three cherubim heads (1747) followed. All of the oak panelling was installed by William Brooks in May 1742. The wall around the churchyard was not completed until 1753.
[Sources Redland Chapel and Redland H J Wilkins 1924 J W Arrowsmith Bristol Redland 791 to 1800 J.Charlton & D.M.Milton 1951 J.W.Arrowsmith Bristol]" 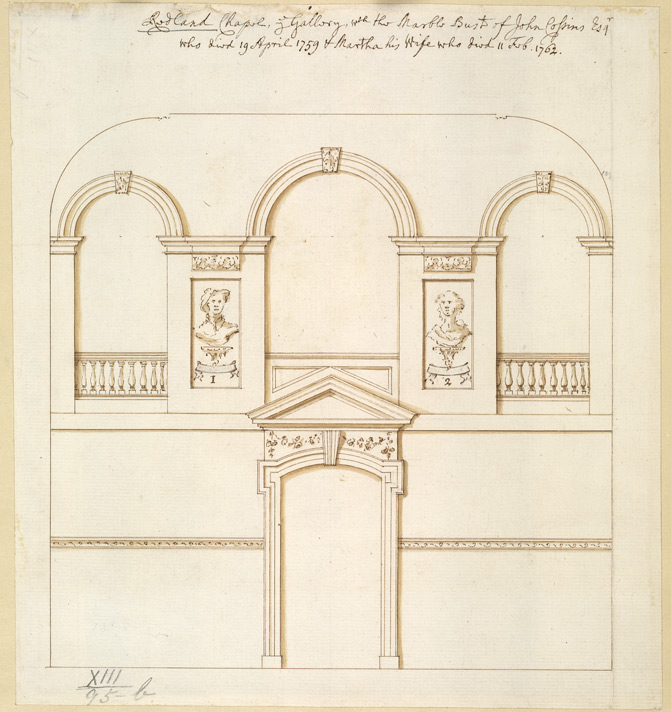 Comment on the British Library webpage says -
"This is almost certainly a Thomas Paty drawing of the original design for the decoration of the interior of Redland Chapel. The niches for the busts of John and Martha Cossins were not made in accordance with this drawing but had rounded heads. The busts carved by Michael Rusbrack in 1734 were brought from Redland Court and installed in the niches on 12 July 1762 after the death of John and Martha.
In 1860 as part of a re-ordering of the Chapel, two lower arches were pierced in this wall with rounded heads".
Source Redland and Redland Chapel H J Wilkins 1924 J W Arrowsmith. London. 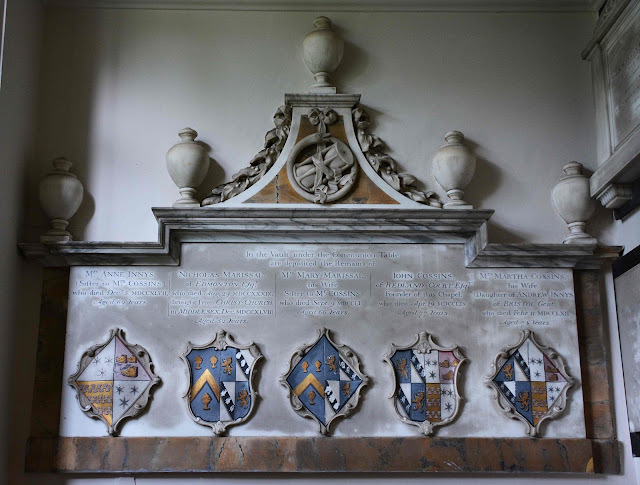 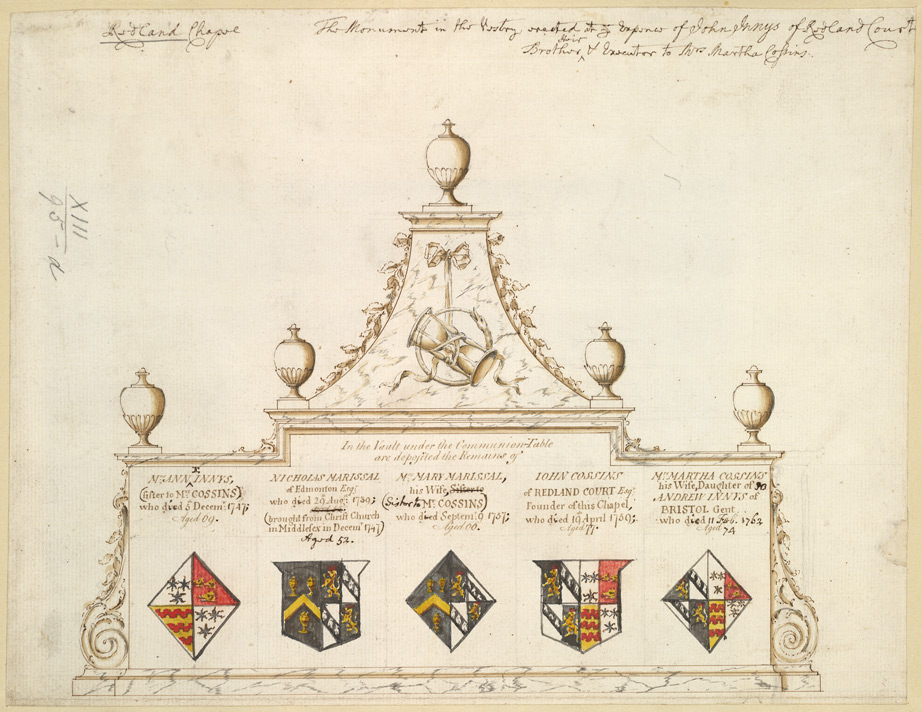 The Monument in the Vestry, Redland Chapel erected at the Expense of John Innys.


Drawings of a monument in the Vestry of Redland Chapel, erected by John Innys. It has inscriptions for family members, including his two sisters Martha (married to John Cossins Esq who built the estate and chapel) and Ann Innys. Also Nicholas Marissal and his wife Mary (sister to John Cossins) are included. John Cossins came from a wealthy grocer's family in London and he married the daughter of a Bristol merchant Andrew Innys, settled in Bristol and bought the Redland Court estate. He replaced the old manor house with a fashionable classical mansion and he also built this chapel in a similar style.

"This monument was designed and executed by Thomas Paty of Bristol and finished on 15 July 1762. It includes the date of Martha Cossins death (11 February 1762). (added later - my comment see Eustace?)

Comment by Gerry Nichols of 2013 on the British Library webpage.

Drawing of Interior of The Redland Chapel by James Stewart Junior c. 1750. 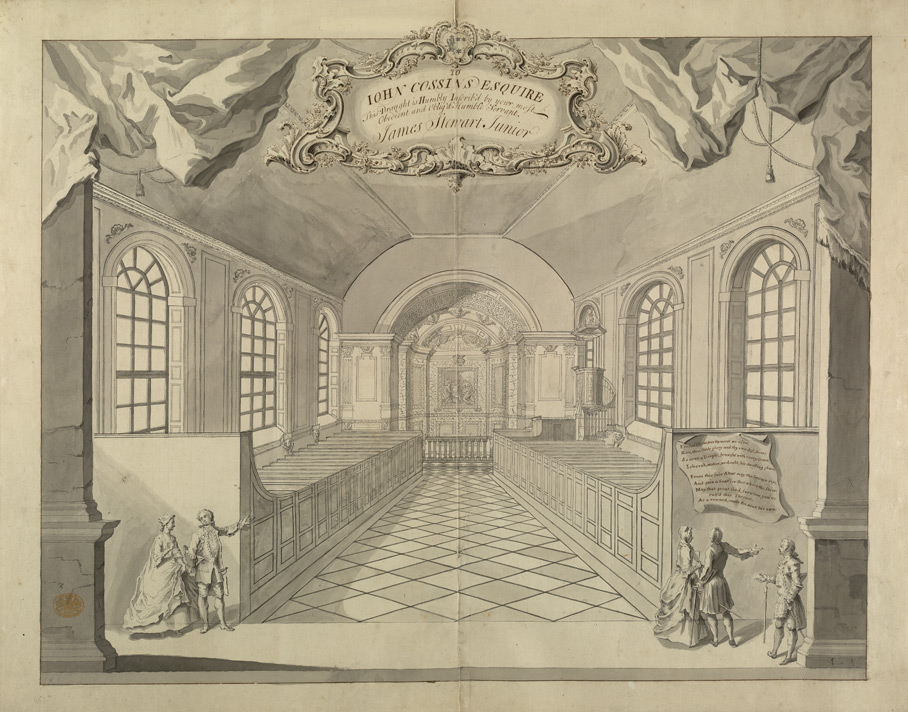 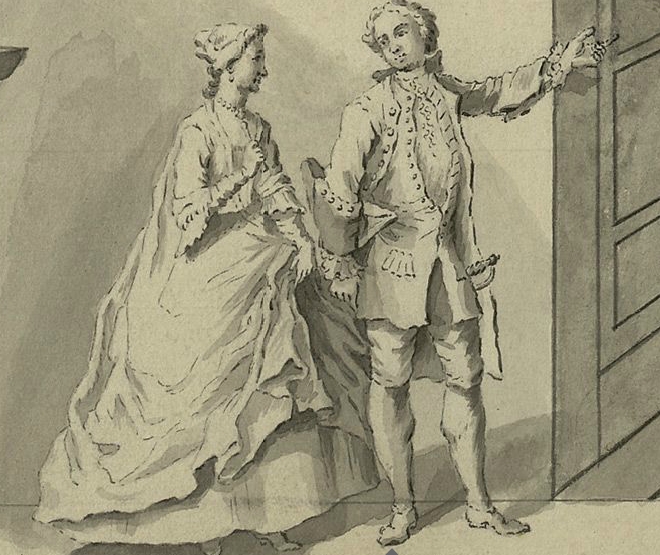 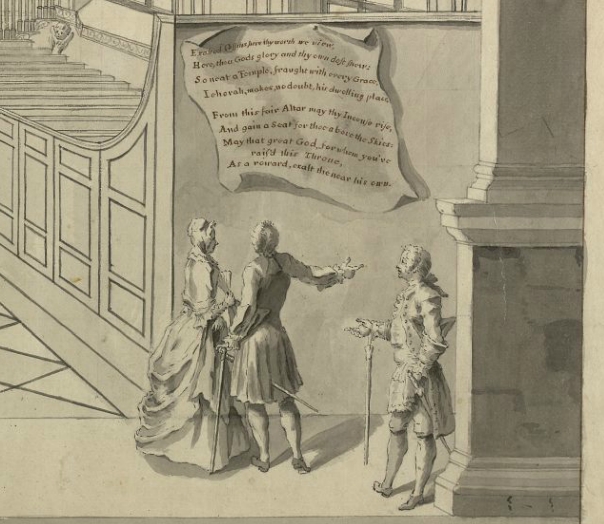 Drawing of Interior of The Redland Chapel by James Stewart Junior

The British Library website has a comment that the figures represented are John and Martha Cossins on the left and Elizabeth ,William (bookseller) and John Innys* on the right.
Image Courtesy British Library.
see - http://www.bl.uk/onlinegallery/onlineex/kinggeorge/other/003ktop00000013u095a0000.html 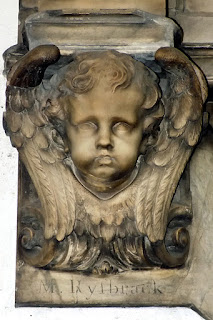 Detail of the monument to Andrew Innys.
died 1723, St Johns on the Wall, Bristol. 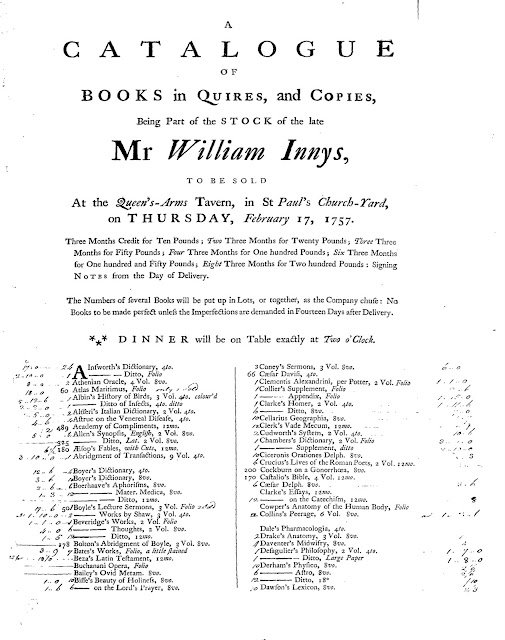 For some interesting notes the Innys family see -

Posted by David Bridgwater at 01:39