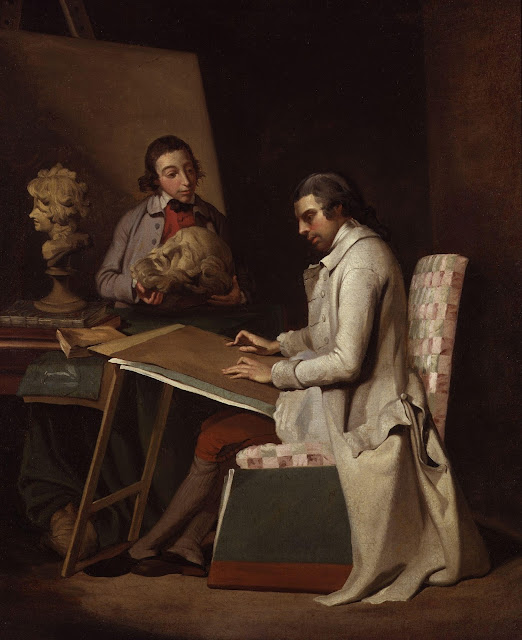 Self portrait of John Hamilton Mortimer with a student.
There is some doubt about this attribution. Malcolm Baker has suggested that it shows the sculptor Joseph Wilton instructing a student

It depicts the student holding a cast of a bust perhaps of Chryssipus of Soli (a marble version is in the Louvre - see below).

Much more interesting for me is the (plaster?) bust of the laughing child which has always been attributed to Roubiliac and is believed to represent Democritus the pair to the crying child Heraclitus.

There is a Chelsea porcelain version of this head in the Ashmolean Museum in Oxford until recently believed unique until another version came up for sale at Bonhams Auction Rooms London Lot 174 18 April 2012 (see below). described by Dr Nicholas Penny as '...the most celebrated piece of porcelain in the Ashmolean Museum...' (Penny 1992, p.17). It was donated by Cyril da Costa Andrade in 1965, in honour of Sir Winston Churchill and was originally from the collection of C.T. Fowler who is said to have discovered it in a London shop, shortly before August 1938.

It was published in The Connoisseur of August 1938, pp. 59-60, illustrated in colour on the cover, where it was romantically suggested (on no real evidence at all) that it was modelled on the head of Roubiliac's daughter Sophie,

The Chelsea Porcelaine factory was started in 1743 by the silversmith Nicolas Sprimont and Charles Gouyn. Sprimont was the godfather of Sophie Roubiliac who was born 25 August 1744 and baptised 23 Sept 1744 at the Huguenot Church in Spring Gardens by M Isac Lesturgeon. It should be noted that Matthew Maty was also a parishioner.

Intriguingly In Roquet's book Etat des Arts en Angleterre of 1755 referring to the Chelsea pottery it mentions a useful French Artist - an ambiguous reference which could refer to either Roubiliac or Sprimont. 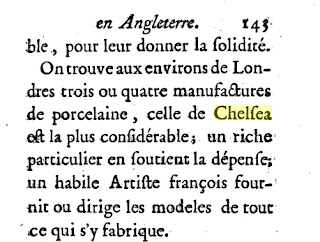 Malcolm Baker in Figured in Marble, pub.V and A Studies, 2000 also points out the inclusion in the sale of William Smith, lot 82 - 25 Feb, 1800, - two sculptural figures in marble, laughing and crying boys. These are followed immediately by a bust of Princess Amelia.

He then goes on to mention the inclusion in an anonymous Paris sale on 30th January 1728 (this date needs confirming) of Le Brun and Boileau - relief models in wax of a celebrated English artist representing busts of a child laughing and a child crying under glass in black frames.... he goes on to suggest that Isaac Gosset (1713 - 99) may be the author but the dates do not tie in he is unlikely to have been described in France as a famous artist at the age of 16!).

Baker goes on to mention the marble bust of a boy laughing in the pocket book of Edward Knight on 9 May 1771. This bust was referred to in the Burlington Magazine (E. Hendriks Oct 1984, 623) as by John Flaxman (1755 - 1826) who would have been 22 at the time - perhaps he was referring to the famous sculptors less well known father John Flaxman I who was a well respected modeller and caster of plaster figures and busts who had taken premises in New Street, Covent Garden in 1766.

In 1770 he was producing models of classical statuettes for Matthew Boulton, the Birmingham ormolu manufacturer, and probably began to work for Wedgwood and Bentley. He supplied a great many designs for Wedgwood in 1775 (5, 26-32, 37, 38). He continued to work for Wedgwood until the 1780s, but the firm sought to attract the services of members of the newly-founded Royal Academy and undervalued Flaxman’s models. Wedgwood wrote to Bentley in February 1771.

‘I wrote to you in my last concerning Busts, I suppose those at the Academy are less hackneyed and better in General than the plaister shops can furnish us with: besides it will sound better to say this is from the Academy, taken from an original in the Gallery of etc etc than to say we had it from Flaxman’

John Flaxman I in 1776 took over larger premises in 420 Strand, opposite Durham Yard. He is known to have taken over moulds from John Cheere.

Although little is known of his early life he is believed to have modelled for both Scheemakers and Roubiliac.- Given the possible) link with Roubiliac the bust of the laughing boy could have come either from the Roubiliac Studio or have been a cast by Flaxman senior.

for more on Flaxman the Elder see  - 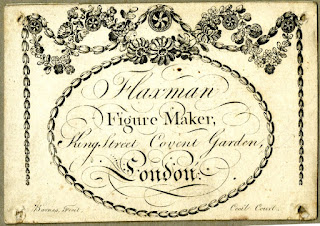 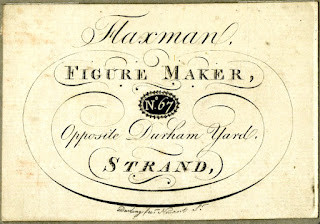 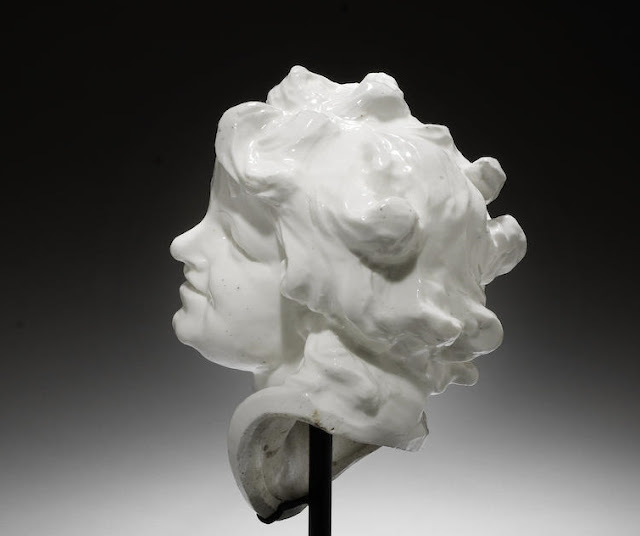 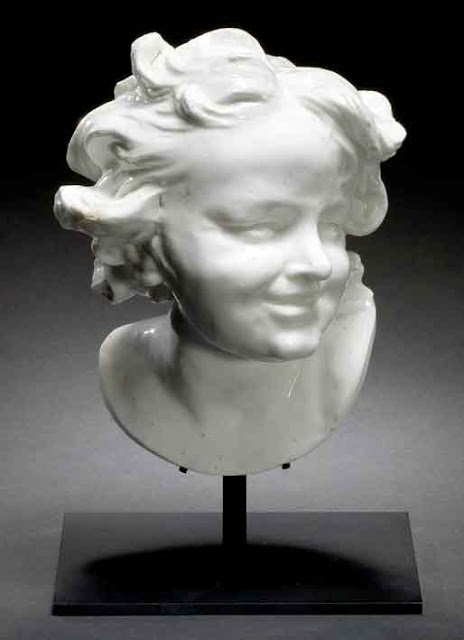 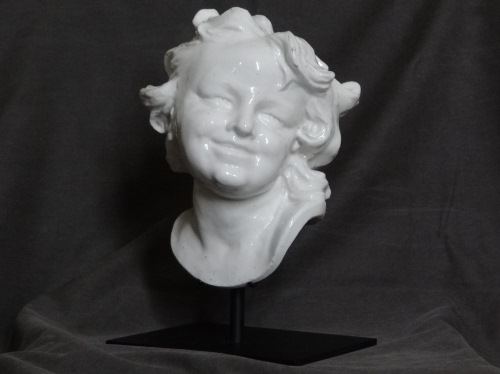 The Chelsea Laughing child sold by Bonhams.
Now at the Holburne Museum, Bath. 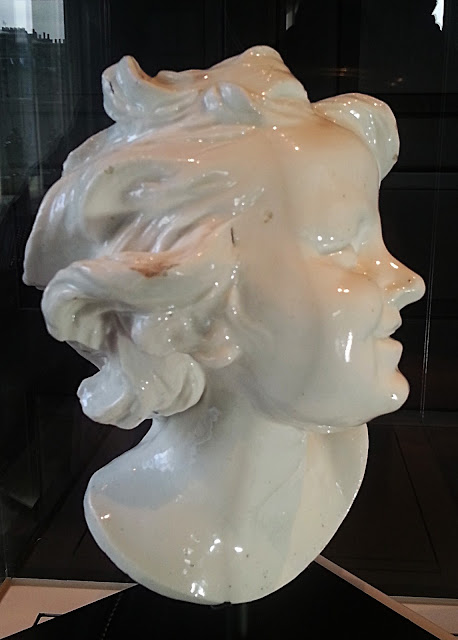 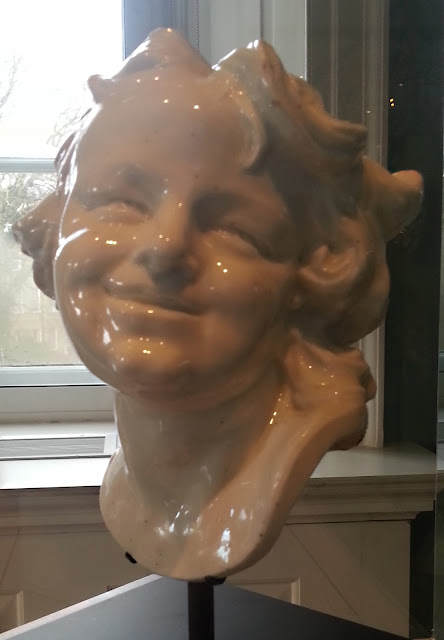 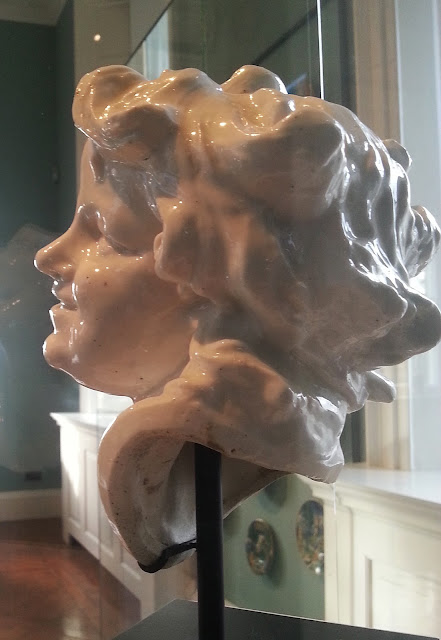 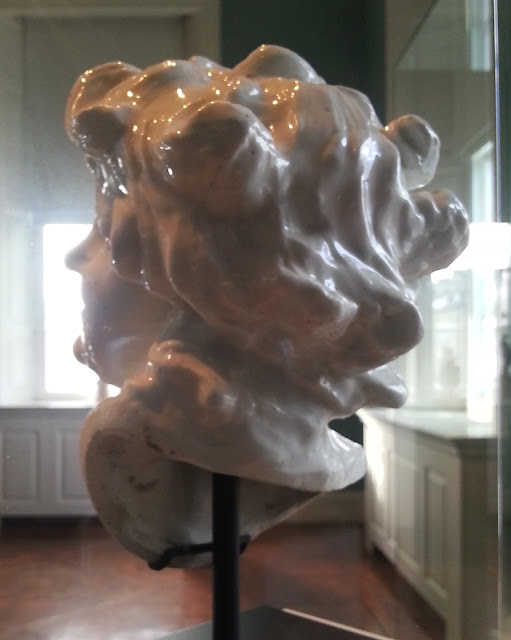 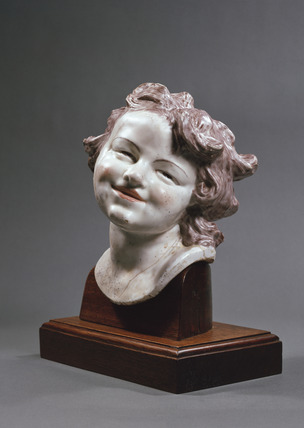 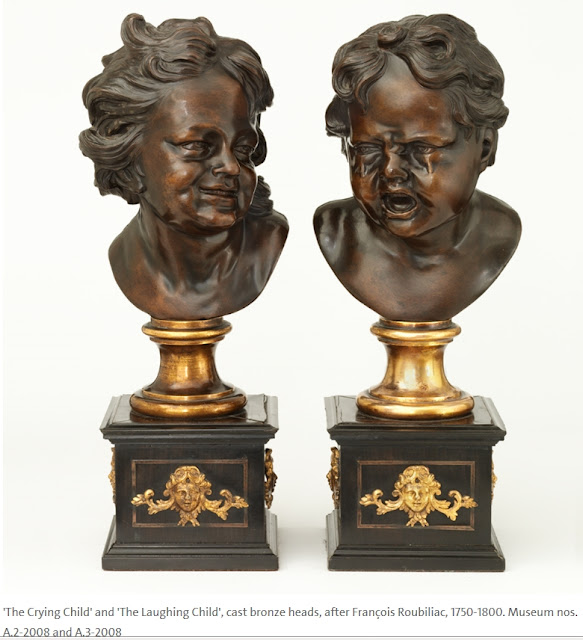 The Laughing and crying children attributed to Roubiliac. Victoria and Albert Museum. The bases are later additions. 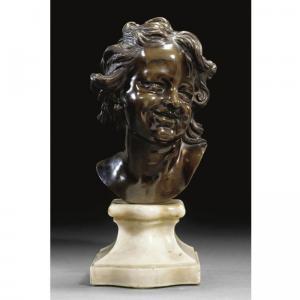 Another bronze of the Laughing child, sold Sotheby's 8th December 2006 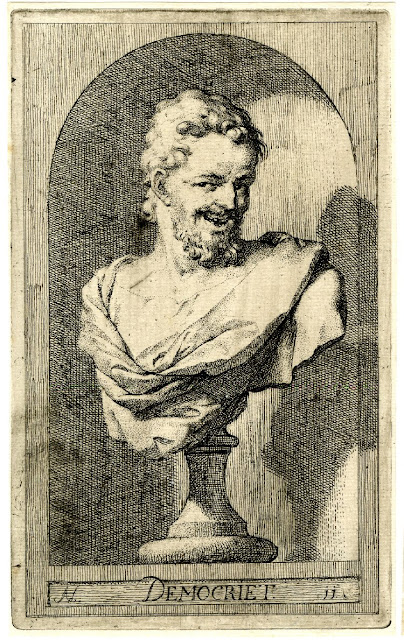 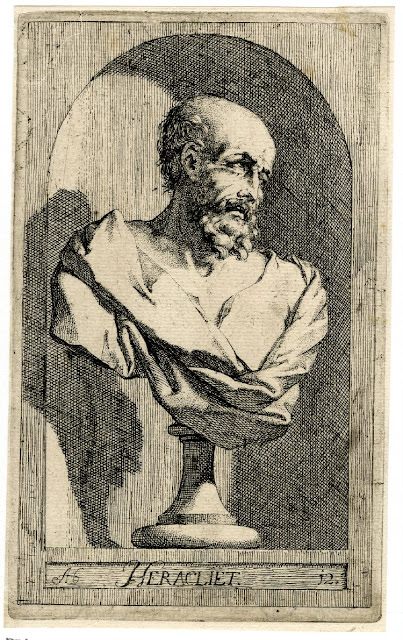 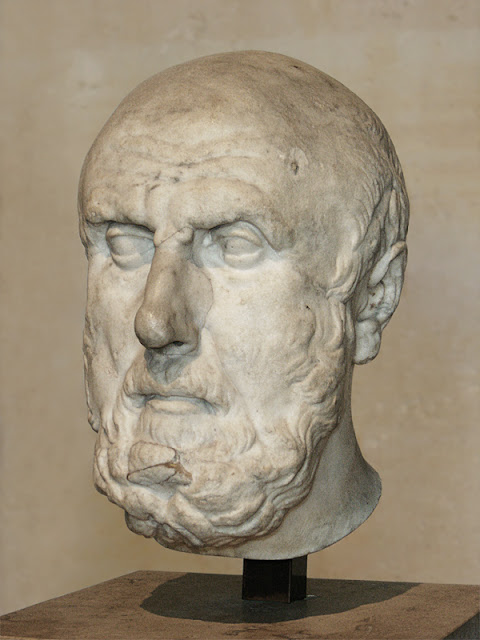 John Hamilton Mortimer (b Eastbourne, Sussex, 17 Sept. 1740; d London, 4 Feb. 1779). English painter and etcher. He studied under Thomas Hudson and became a lifelong friend of his fellow pupil Joseph Wright. His work included portraits, similar in style to those of Wright and conversation pieces in the manner of Zoffany, but he was at his best in historical and imaginative subjects. Among these were pioneering scenes from medieval British history, but he found his true bent in the 1770s with pictures showing the exploits of soldiers and banditti in the ‘savage’ style of Salvator Rosa (Bandit Taking Up his Post, c.1775, Detroit Inst. of Arts Many of his paintings have disappeared and are now known only through engravings. Mortimer led an eccentric and disorderly life, but he became more settled after marrying in 1775 and his early death cut short the career of one of the most individual British painters of his generation. 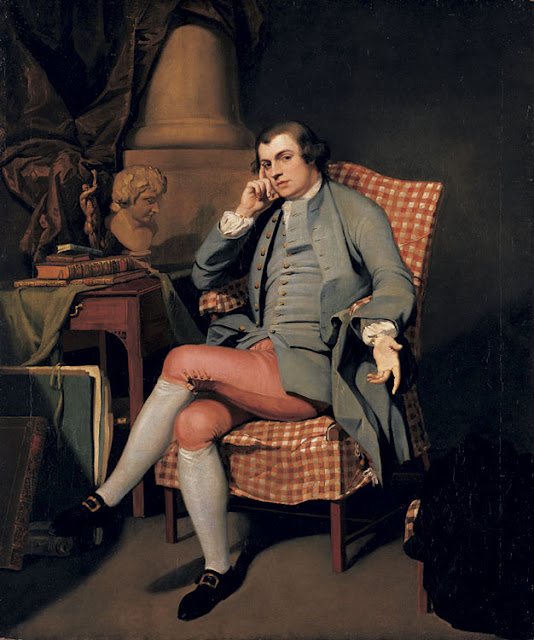 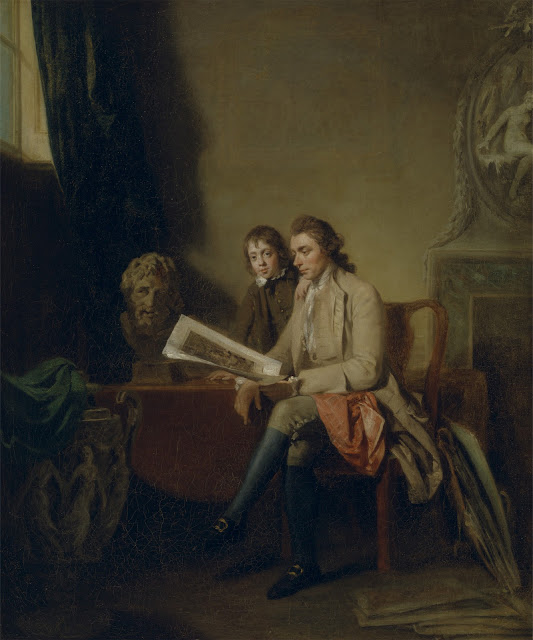 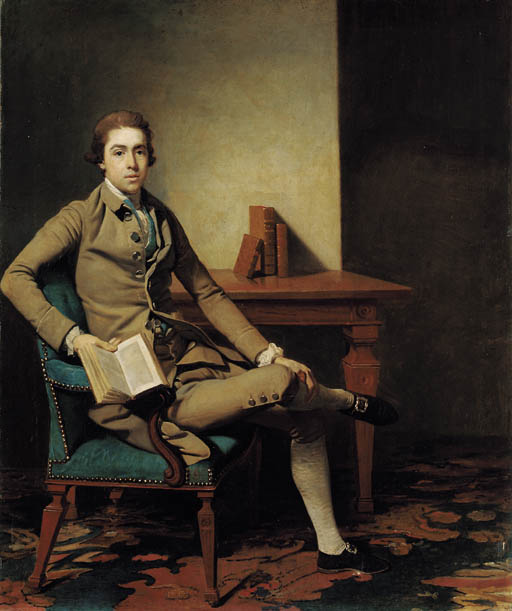 Mr Seward by John Hamilton Mortimer, circa 1767 -70, sold Christie's 15 June 2001.
There are no more details available but it almost certainly represents William Seward (1747 - 1799) the owner of the bust of Alexander Pope by Roubiliac previously explored in this blog on 7th February 2014. 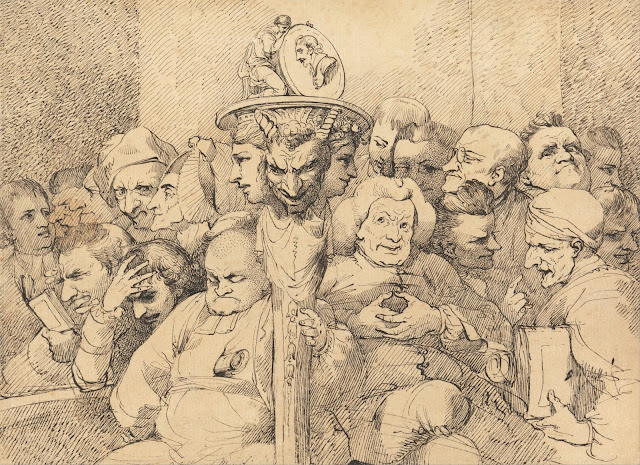 Literary figures assembled round a Medallion of Shakespeare a pen and ink drawing by
John Hamilton Mortimer. Drawn for John Kenyon of Chalfont St Giles Buckinghamshire
1776, 20.8 x 28.6 cms
Yale, Paul Mellon Centre for British Art.
It satirises the Shakespeare Jubilee celebration orchestrated by David Garrick
The figure with the hat on the left is believed to represent Roubiliac. Mortimer's plinth parodying Scheemaker's monument in Westminster Abbey sports three similar heads, although in this case they represent Tragedy, Satire and Comedy. It supports the medallion of Shakespeare struck especially for the jubilee celebrations. Amongst those present are Baretti squinting at his book (after Joshua Reynolds), next to him Garrick declaiming and Samuel Johnson at the front right
see - The Artist as Original Genius: Shakespeare's Fine Frenzy in Late 18th Century British Art, William Pressy, 2007. 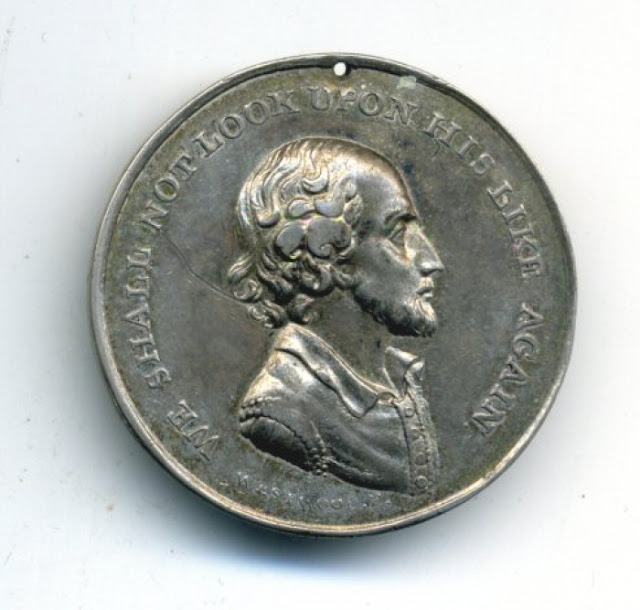 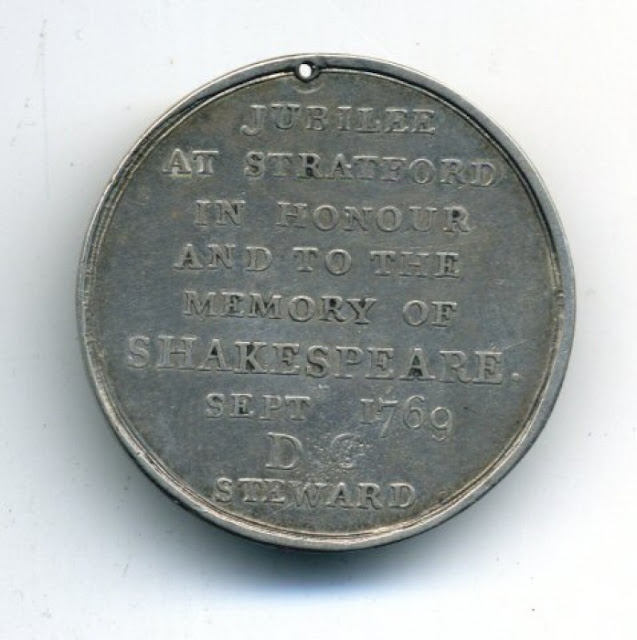 Stratford upon Avon, Shakespeare Jubilee Festival, silver pass, 1769, by J. Westwood, draped bust of Shakespeare profile right, SHALL NOT LOOK UPON HIS LIKE AGAIN (A QUOTE TAKEN FROM HAMLET, ACT 1, SCENE 2, rev. JUBILEE/ AT STRATFORD/ IN HONOUR/ AND TO THE/ MEMORY OF/ SHAKESPEARE/ SEPTR 1769/ D. G. / STEWARD, 32 mm, (BHM. 136), pierced for suspension.
The initials D. G. on the reverse refer to David Garrick, Steward for the event who, after the oratorio in the Stratford great church, led a procession to the ampitheatre and then presided over a grand lunch. The festivities concluded with various musical performances and songs set to music by Dibden and Arne, ending with and address and epilogue by Garrick. The Gentleman's Magazine of 1769 carries a letter from a correspondent attending the Festival in which he states that "my dress consisted of ... a silver medal of Shakespeare, pendant from a sky blue ribbon round my neck.". Also present was James Boswell, who , in his report, makes a similar reference, "We all wore, hung in a blue ribband at our breasts, a medal of Shakespeare, very well cast by Mr Westwood of Birmingham. On one side was the head of Shakespeare, and round it this inscription We shall not look upon his like again ..."
From the Website of Timothy Millett - a highly recommended dealer

Posted by David Bridgwater at 08:40