Conversation pieces by Gawen Hamilton (1698 - 1737)
showing the display of busts and statues in domestic situations.

George Vertue (1683-1756), writing on Hamilton's death in 1737, praised his 'easy graceful likeness' and claimed that it was the opinion of several artists that in some instances he 'outdid Mr Hogarth' 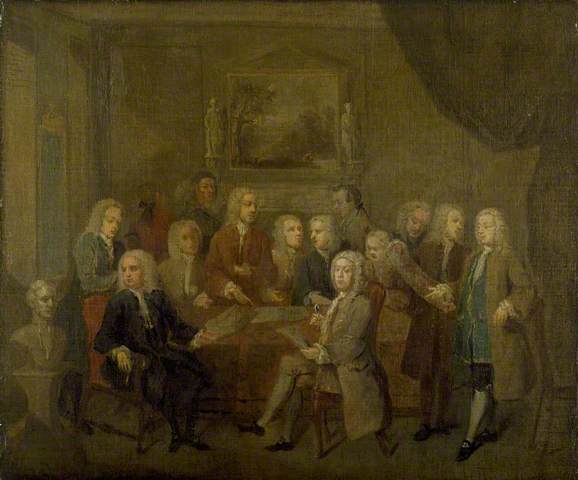 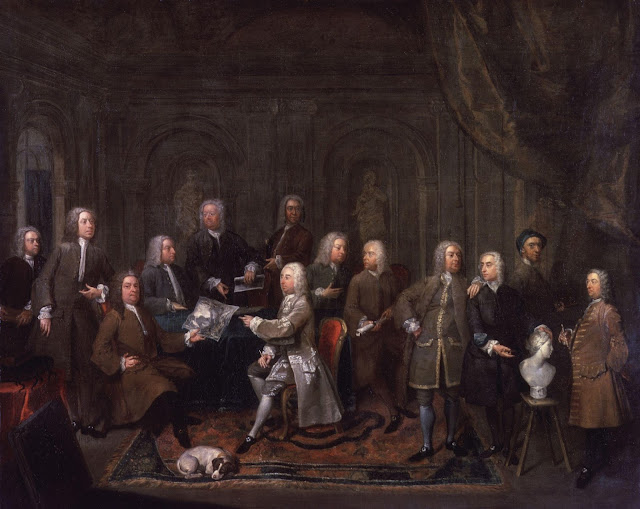 An Assembly of Virtuosi at the Kings Arms, 1735.
Oil on Canvas - 87.6 x 111.5cms.
National Portrait Gallery, London.
Gawen Hamilton -2nd from the right with blue turban next to Michael Rysbrack 3rd from right.. 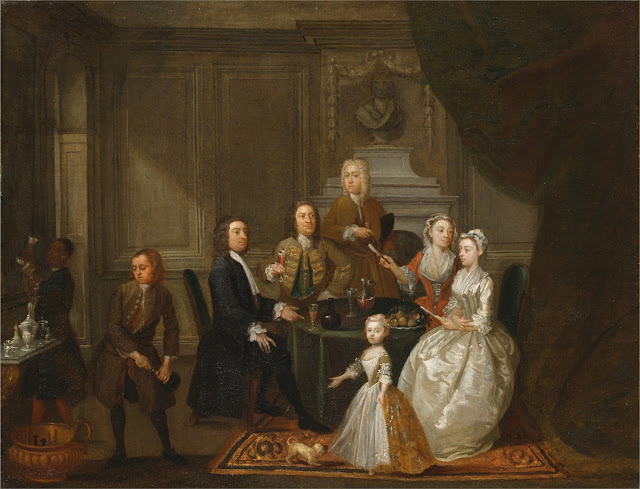 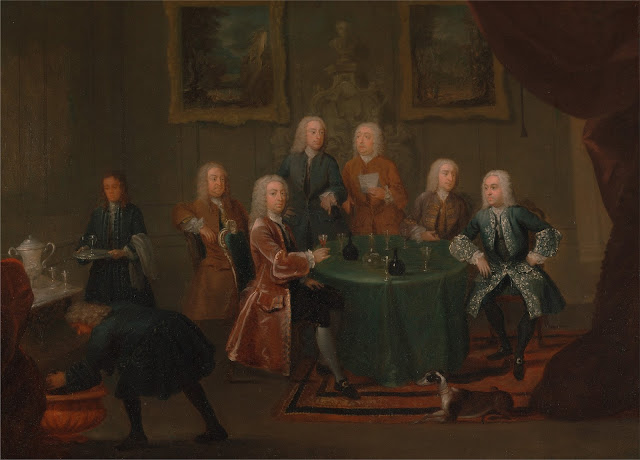 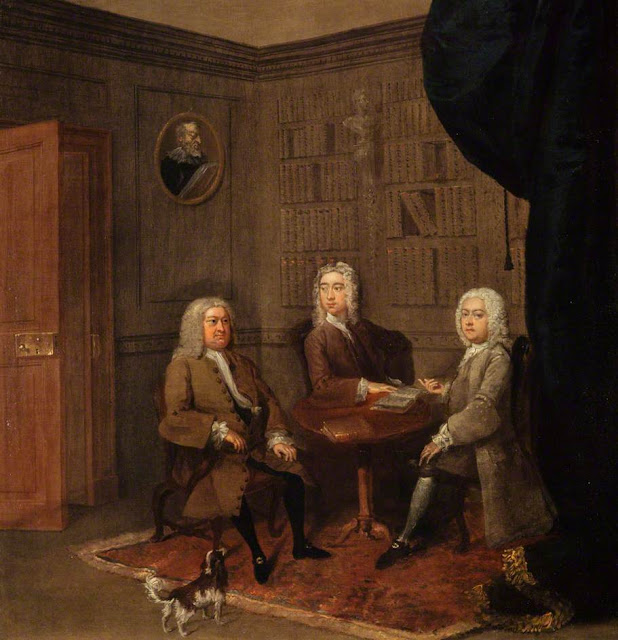 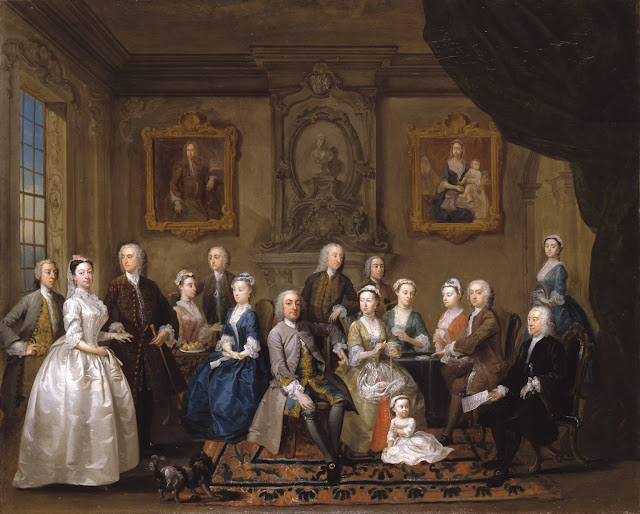 This large and imposing group portrait, which celebrates the dynastic conjunction of the financially powerful Huguenot families of Du Cane and Boehm, is arguably Hamilton's finest. It was very likely commissioned by Richard Du Cane (1688-1641) as a visual demonstration of his family's success and future fortune, to which Hamilton has responded impressively. Born in Scotland but working in London by at least 1728, Hamilton was held in high regard by contemporaries. George Vertue (1683-1756), writing on Hamilton's death in 1737, praised his 'easy graceful likeness' and claimed that it was the opinion of several artists that in some instances he 'outdid Mr Hogarth'. Here, working at what must have been the peak of his artistic maturity, Hamilton comes very near to Hogarth (1697-1764), skillfully handling a composition of great complexity.
The Du Canes were a Huguenot family originally from the Spanish Netherlands, who in the late sixteenth century had fled to England to escape religious persecution. Likewise, the Boehms left Strasbourg and settled in London in the 1680s. Both families were powerful forces in the City, with extensive mercantile and financial interests (several members of both families were Directors of the Bank of England). In 1730 the families were united through the marriage of Jane Du Cane (b.1711) to Charles Boehm (1699-1769) and it is this dynastic alliance, and continuity, that the painting celebrates. Richard Du Cane stands in the centre of the picture, at the heart of what is a hierarchic composition. Above him, on the wall to either side, are ancestral portraits of his father Peter Du Cane and his mother Anne Booth (holding in her arms the infant Richard); slightly to his right is, most probably, his second son Richard; while below sit his daughter and son-in-law. At their feet is their heir, Clement, to whom his father points and to whom his mother is linked by a skein of thread. The distinguished figure, seated in black on the far right, is most likely a posthumous representation of Clement Boehm the Elder (1660-1734), the founder of the Boehm fortune in London. He holds a piece of paper dated 1734, probably his Will, which no doubt was to the positive benefit of the assembled crowd.
Directly above the group, surmounting the overmantel, are the married couple's armorial bearings (Boehm quartered with Dilke impaling Du Cane). They appear again on the very high quality carved and gilded frame, of contemporary 1730s English craftsmanship, possibly by a Huguenot craftsman. Richard Du Cane had taken great care to have the Du Cane arms anglicised and registered at the College of Arms in 1731, and the picture seems to stress his great pride in his family and its direct and demonstrable lineage.
It is unlikely that the space the sitters occupy is a real interior. The arms above the chimneypiece would indicate a Boehm property, either in London or Twickenham, although the portraits on the wall represent Du Canes. It is more likely an imagined space created by the artist, conjured to reflect the fashionable taste of his patron. Indeed, Hamilton has altered the décor, from an initial Palladian to a more up-to-date and dynamic Rococo (the straight edges of the frames of the ancestral portraits are still faintly visible below their new decoration). The extremely flamboyant overmantel is an elaborated version of the one Hamilton created for The Brothers Clarke of Swakeleys, circa 1730-5 (Yale Center for British Art). 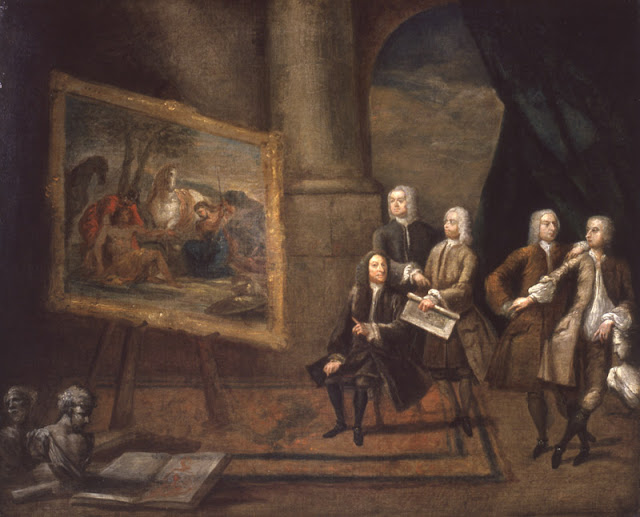 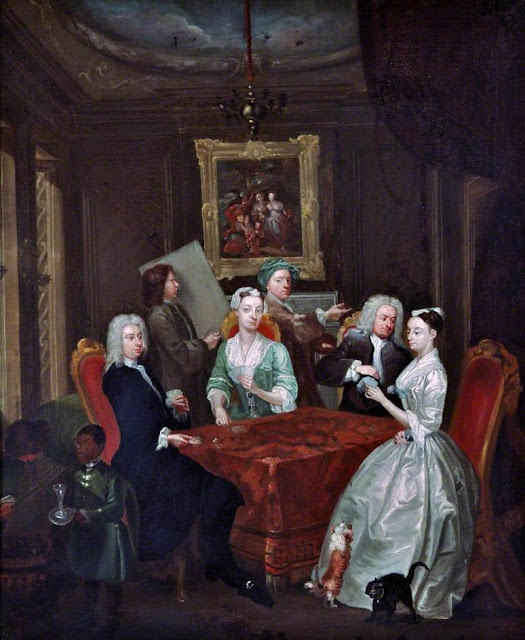 I am including this intriguing painting because of the details of the black servant boy, the cat and dog and the possibility that it includes a self portrait of Gawen Hamilton (in the blue turban).

Posted by David Bridgwater at 04:52