Short and not exhaustive list -
note - some of this post is now needs updating as more examples and better photographs have appeared.

1. The British Museum plaster bust of Alexander Pope bought by Dr Matey at the posthumous Roubiliac sale in May 1762. 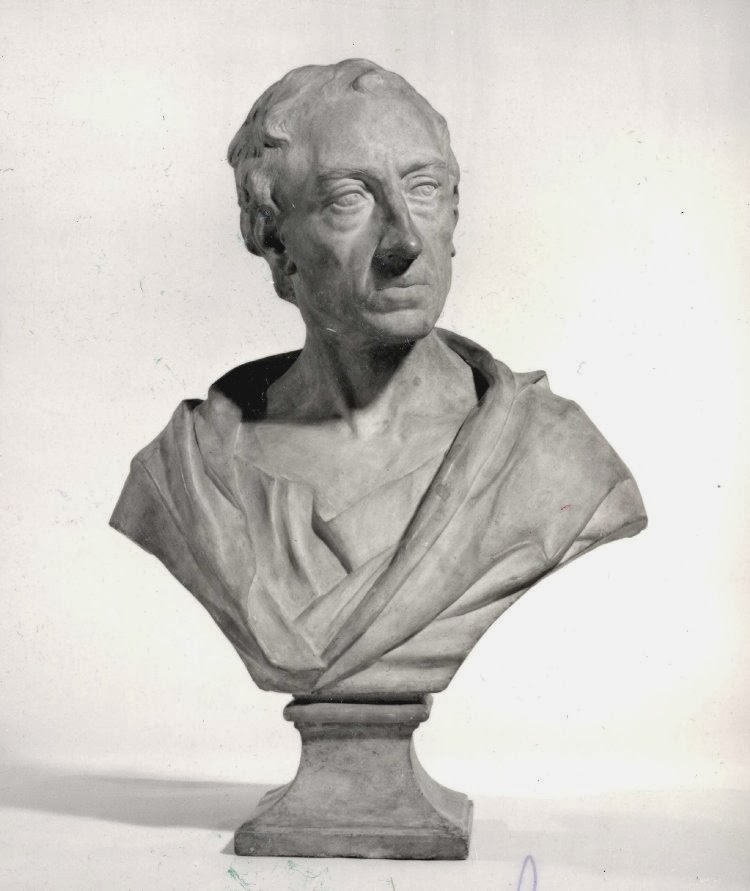 
Wimsatt in his Portraits of Alexander Pope seems to suggest that it is of the same type as the Stourhead bust, but also notes that Rupert Gunnis (11 March 1899 - 31 July 1965) who compiled the Dictionary of British Sculptors suggests the author might be the elder Flaxman who supplied plaster busts of Milton and Pope and figures of Flora and Zingara to James West of Alscot Park, Stratford on Avon, Warwickshire in 1767, info drawing on the West family papers.

3. Plaster bust of Alexander Pope at Felbrigg Hall, Norfolk. (National Trust).Very similar to the Garrick/Shipley Version but has a square socle.

Perhaps one of the casts by Roubiliac from the moulds sold at the posthumous sale. It would appear to be a direct copy from the marble. 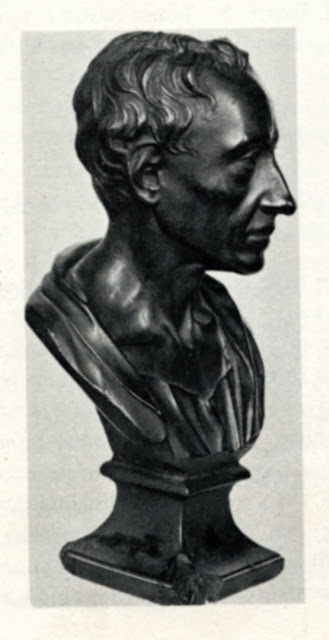 Inscribed on the back. L.F. ROUBILIAC Sc. AD VIVUM MDCCXLI

and on the right A.POPE AET LIII. As the Garrick / Shipley bust


Note. The prominent forelock as on the Shipley / Garrick version which is not on any of the other versions.

4. Plaster bust of Alexander Pope, 17”, with Kulgin.D.Duval, bookseller of Frenich, Foss, Pitlochry in his Winter catalogue of 1974. 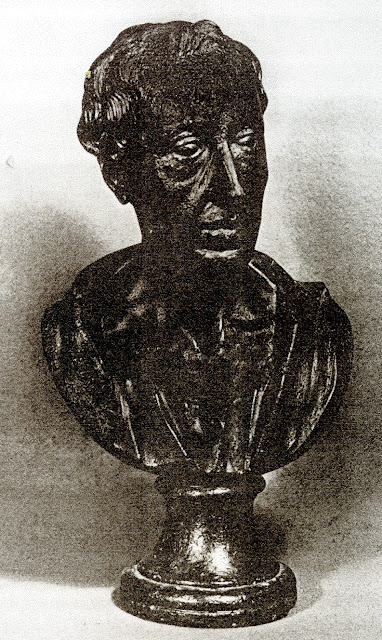 
Appears to be exactly the same as the bust in the previous entry, including the inscription, except that it has a round socle.

Another of this type is mentioned in Wimsatt p. 241 (59.3) as being in the possession of Mrs Richard Wigston of Mundesley, Norfolk in 1903


Another version of this bust passed through Sothebys lot 61, 5 July 1990.


These last four busts could all perhaps have been cast from one of the moulds sold at the Roubiliac sale. 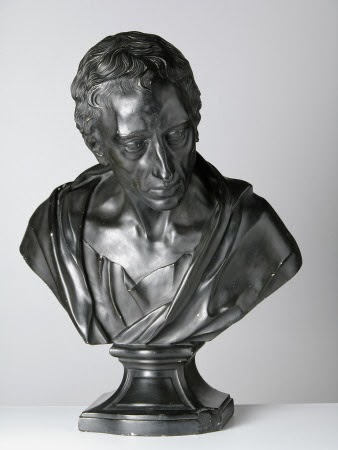 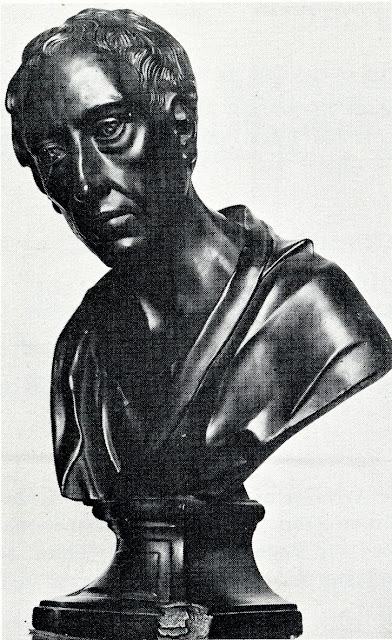 The socle of a type widely used by John Cheere on his plaster busts also appears on a terracotta version of Handel by Roubiliac at the National Portrait Gallery. 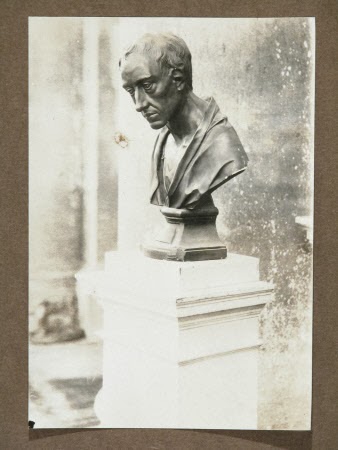 National Trust say Charles Harris of the Strand? I am not yet sure on what basis.

Of the Stourhead busts of Pope, Milton, Dryden and Bolingbroke, Mrs Geoffrey Webb (in Rysbrack 1951) says “ they are not by Roubiliac but by a lesser and later master, who made busts specially for libraries, each bust being frequently based on an original”.

I would suggest that she probably never saw this bust - it is extremely fine.

Perhaps by John Cheere, Illustrated in The Man at Hyde Park Corner by Timothy Clifford and Terry Friedman.


In 1751, Lord Chesterfield sent busts of Shakespeare, Dryden, Milton and Pope to Madame Bocage in Paris, again these might be related.

6. A Plaster bust of Alexander Pope at the Wren Library, Trinity College, Cambridge.

Probably by John Cheere, but perhaps Charles Harris, see Catalogue at the National Arts Library which includes a list of subjects perhaps matching the moulds sold at Roubiliac's studio sale. 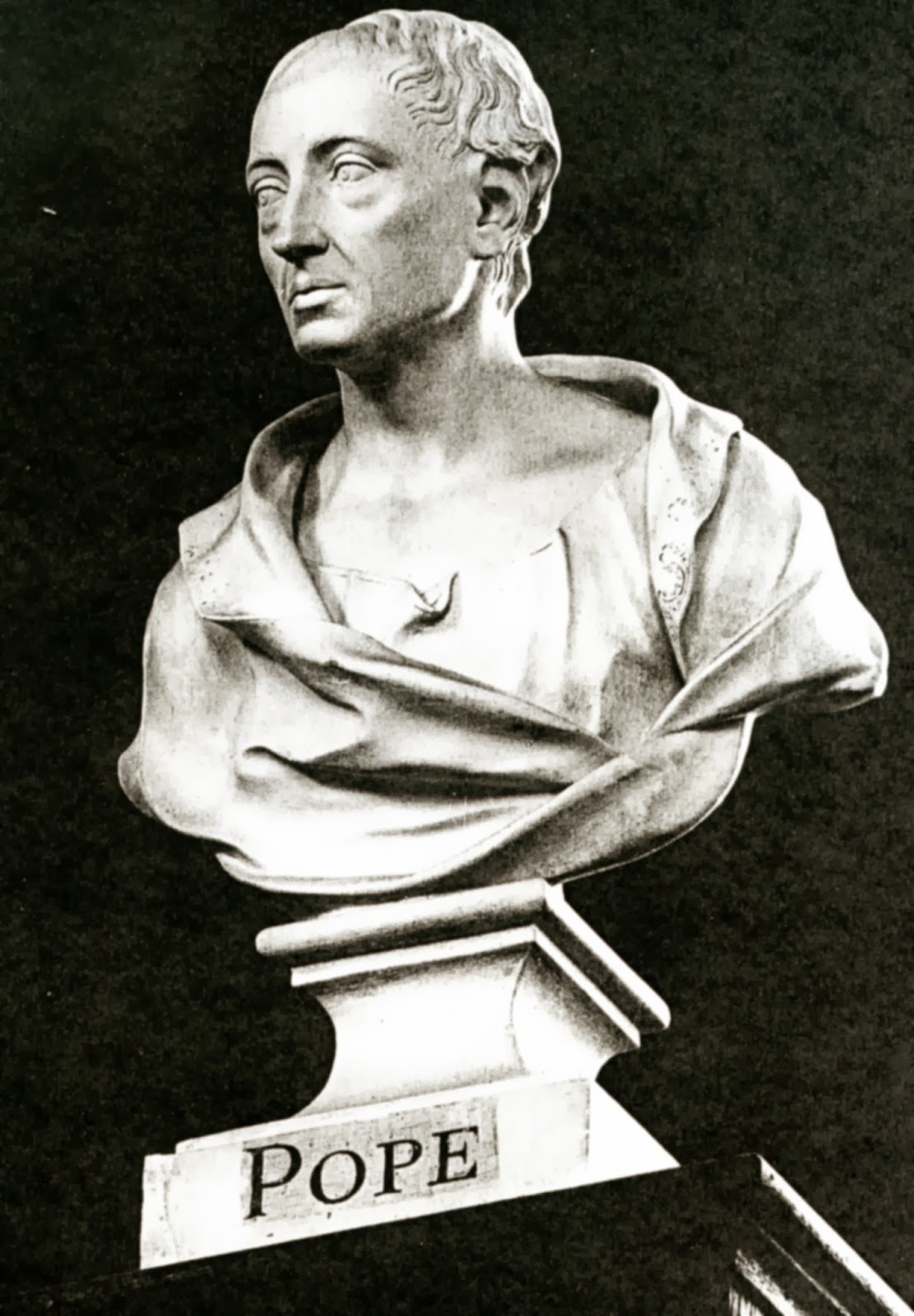 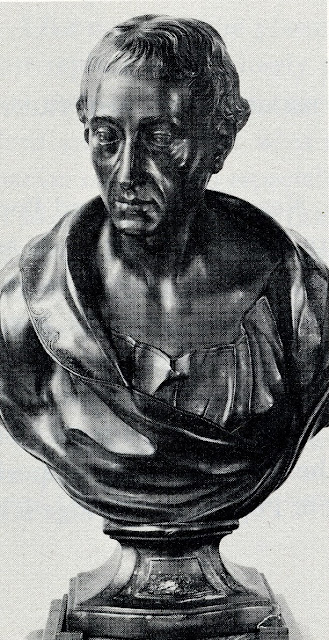 Scan from Portraits of Alexander Pope by Wimsatt.


Very difficult to identify from the illustration in Wimsatt, who seems to suggest that it is of the same type as the Stourhead bust, but also notes that Rupert Gunnis suggests the author might be the elder Flaxman who supplied plaster busts of Milton and Pope to James West of Alscot Park, Stratford on Avon, Warwickshire in 1767 drawing on the West family papers. 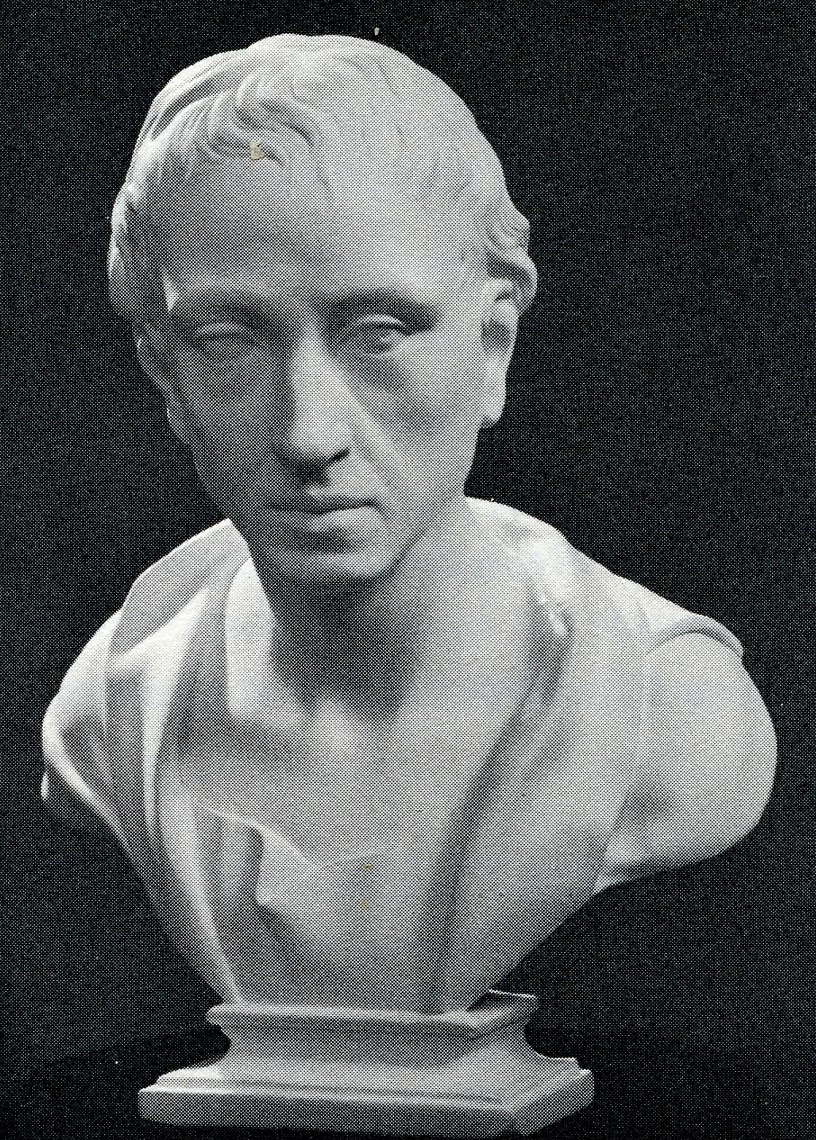 
It would appear from the photograph in Wimsatt that this bust is related to the Temple Newsam and Seward Marble busts.
A lead version of this bust exists - see the following notes. The lead bust on a later marble socle appears to be from the first half of the eighteenth century with extensive remains of its original patination and is therefore a candidate for one of the plasters or a cast from one of the moulds sold at the Roubiliac Sale by Langfords. 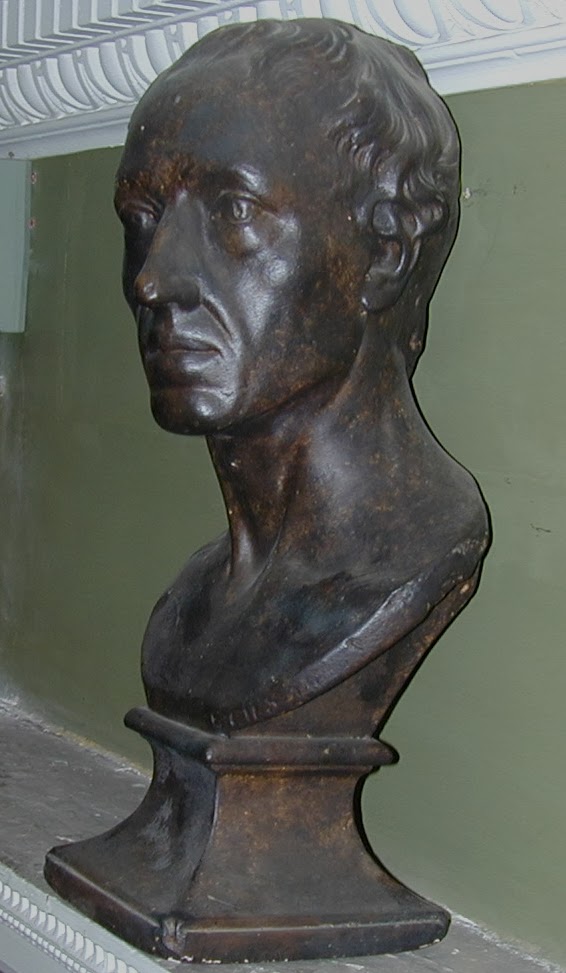 This bust is very thickly overpainted. The detail of the inscription on the back and around the neck are almost completely obscured but can just be made out to correspond with the Milton bust. 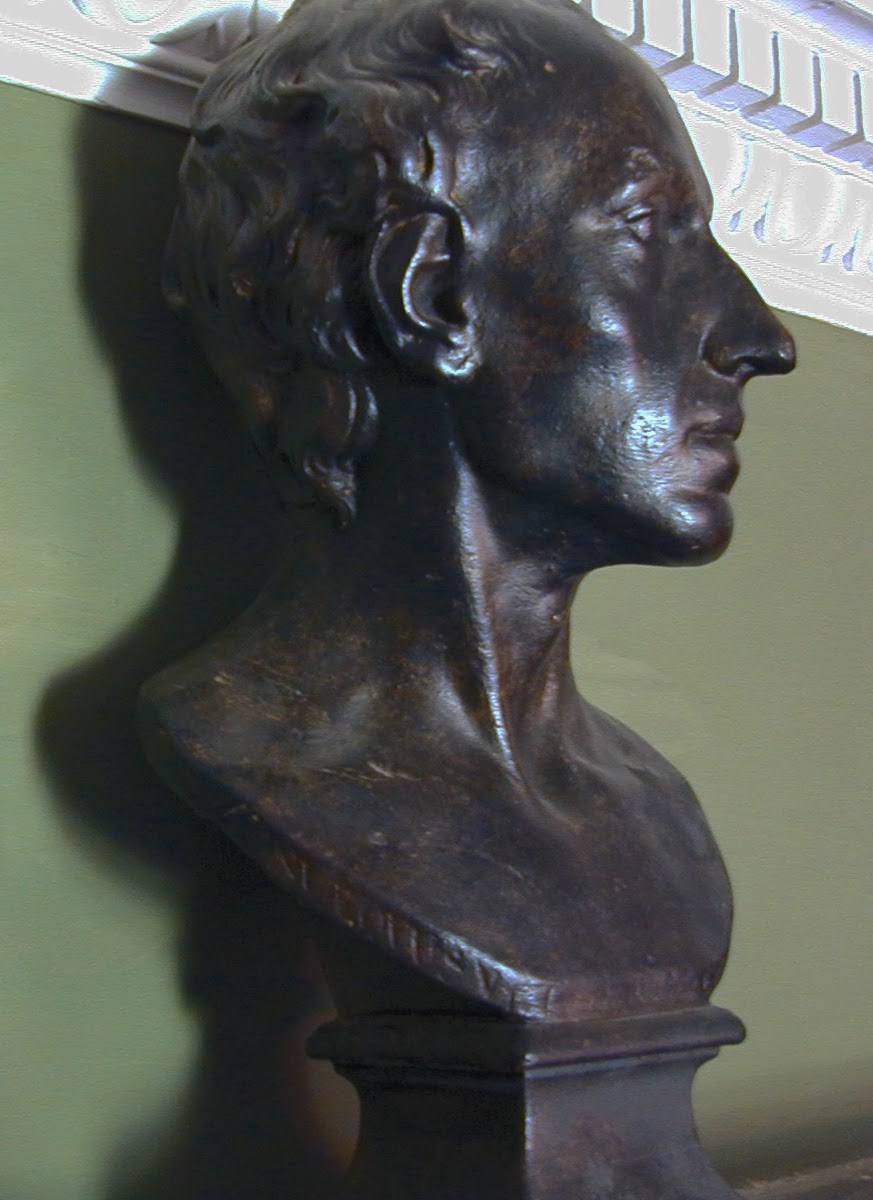 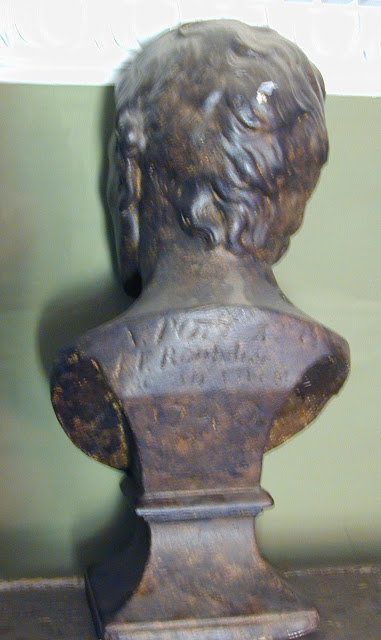 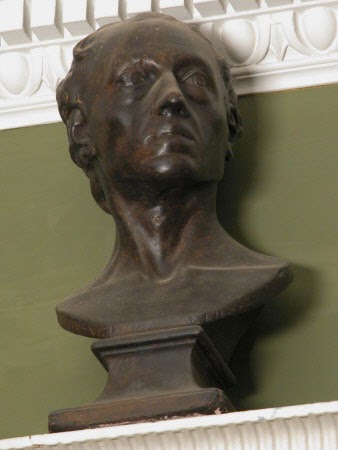 Roubiliac type very similar to the bust at Stourhead the head with a pronounced forward lean.but with a different, Cavaceppi type socle. Wimsatt was unaware of this bust. 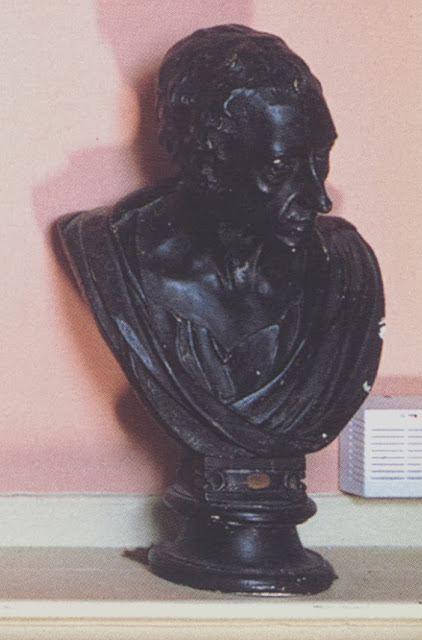 12. Plaster bust of Alexander Pope in the Library at Studely Royal, Yorkshire from an old Country Life Magazine photograph. Similar to the Jolliffe plaster bust no.9 above in this list, but with a different socle. Wimsatt was unaware of this bust. 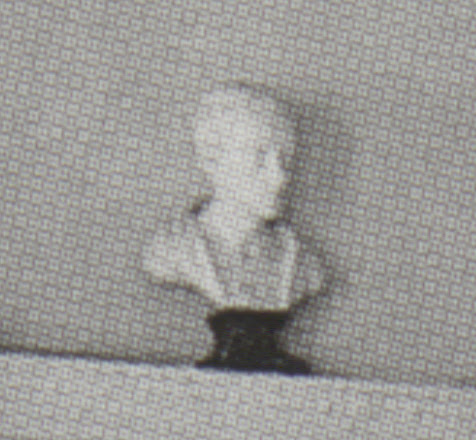 The Library Busts at Studely Royal - left to right.


Studely Royal was the house of John Aislabie d.1742, disgraced Chancellor of the Exchequer at the time of the South Sea Bubble and his son William Aislabie d.1781, magnificent classical gardens including Medieval Fountains Abbey. House destroyed by fire in 1946. This bust has not yet been located.
Posted by David Bridgwater at 06:18