The bust and monument are unattributed but I would suggest possibly Rysbrack.
The bust is of very high quality. 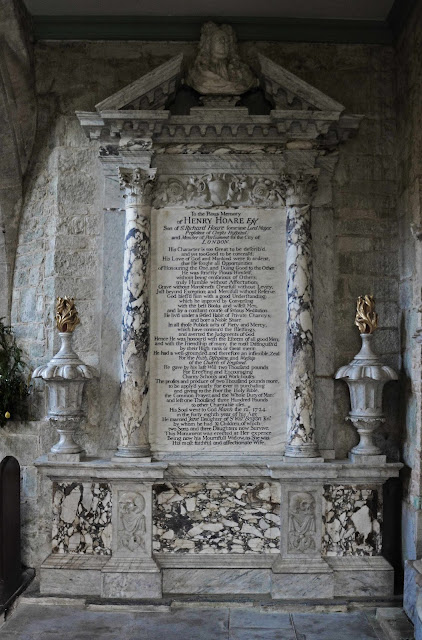 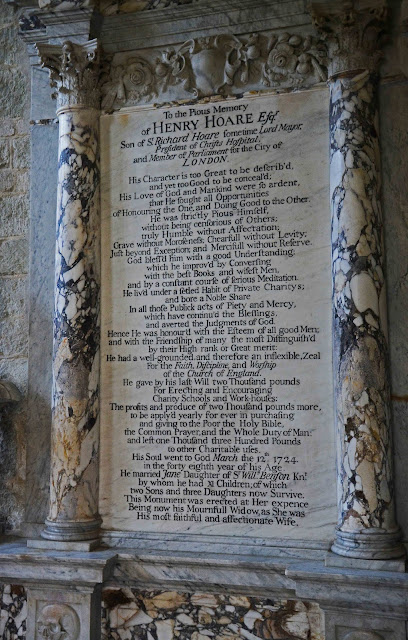 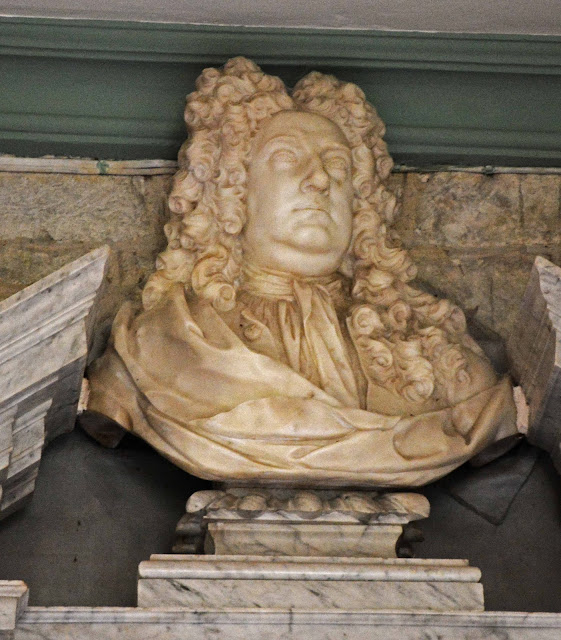 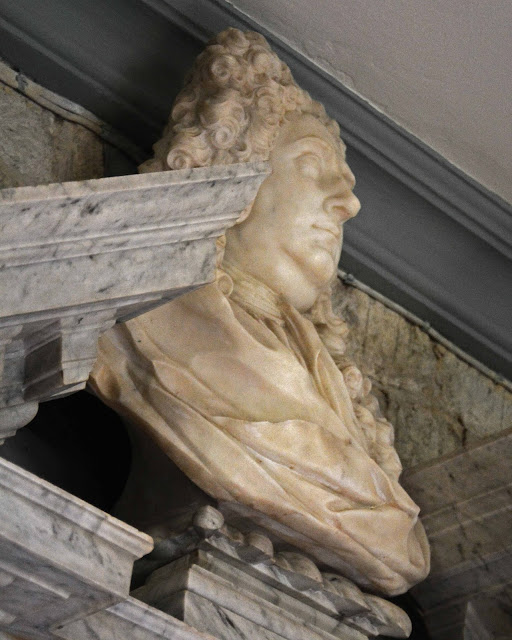 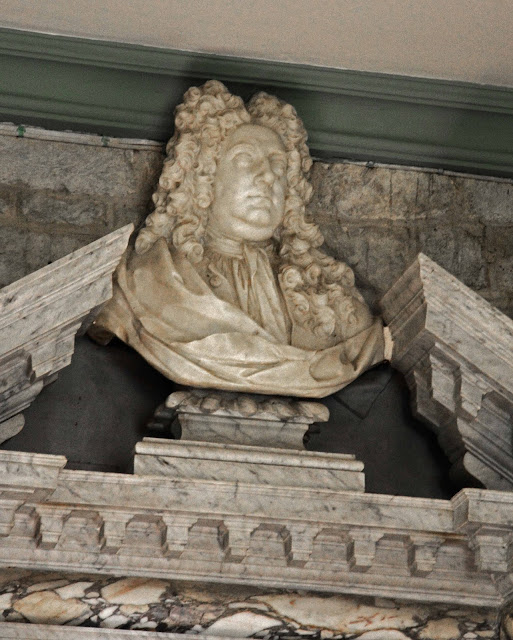 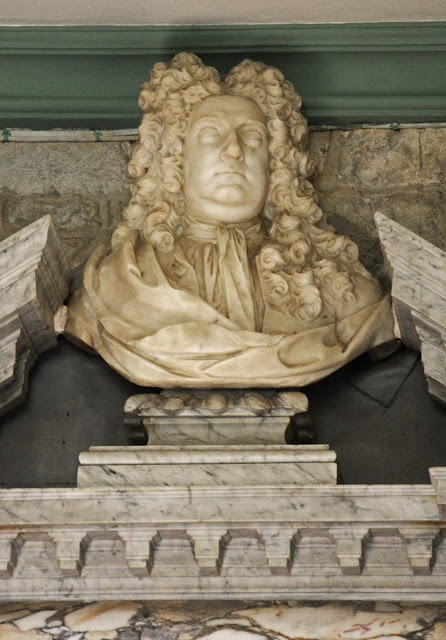 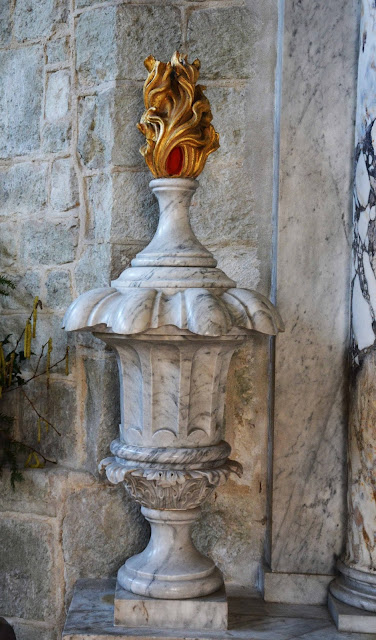 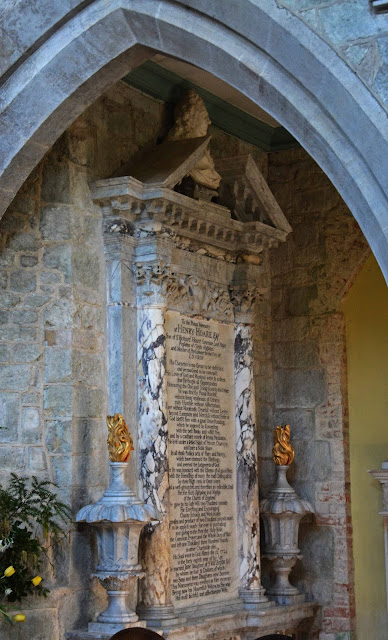 All photographs by the author

Not an easy monument to photograph, particularly it was difficult to obtain good photographs of the bust.

Parts of the church of St. Peter date from the early 1300s, but it has been restored and altered throughout the centuries. The earliest documentary evidence for a church on this site is in 1291 when Ralph de Sturton held the right of presentation of the living. The arcading in the north of the nave dates from this time, and it is possible that the tower was built then.

Sir John Stourton was created Lord Stourton in 1448. The Stourtons were all patrons of the church and were buried in a family vault which is in the present north aisle. In 1553 the churchwardens presented that the nave of the church was in decay. It is not known what building work was carried out to correct this.

The Hoare family bought the estate in 1717 and by 1720 Henry Hoare had applied for a faculty to improve the church. The work was carried out during 1722-3. The screen and rood loft were removed, a new altar erected and an altar piece built to cover the whole east wall. The pulpit was moved from the north aisle to its present position. Lastly, the chancel was newly paved and a family vault was built.

The next alterations took place in 1848 when the south aisle was added to provide more seating. The Hoare family pew was also created at this time.

Further restoration took place in 1878. A new east window with stained glass was built. Three large Hoare family monuments were moved from the chancel to the south aisle. A new oak roof, tiled, was built over the chancel. The gallery at the west end was removed and the tower arch was opened out and restored. An oak screen was built between the tower and the nave. An organ chamber and vestry room were added on to the south side of the chancel. The floor was re-tiled, new nave furnishings provided, an oak lectern and a new stone font with an oak cover. The entire cost of the work was £1,000. In 1880 the project was completed when the whole church was decorated.

Alterations continued into the 20th century when improvements to the chancel and sanctuary were undertaken by Sir Henry and Lady Hoare to commemorate their Golden Wedding in 1937. The work included removing the wooden reredos and altar; the provision of a new altar comprising a single stone slab on wooden legs, so that it could be removed at any time; a figure of Christ to replace the reredos and east window; a new altar cross, candlesticks and altar rail.

More recently, the old box pews were removed from the north aisle and in 1974 the east end of the north aisle was made into a baptistry. The present font replaced the Victorian font and is late Norman. It came from the now redundant church at Monkton Deverill.

www.flickr.com/gp/52219527@N00/3nq5D3 at Walton on Thames which cost £1000 (the contract specified a monument 7 foot wide and double that in height). The £500 did not include the cost of railing and repairs to the church incurred. 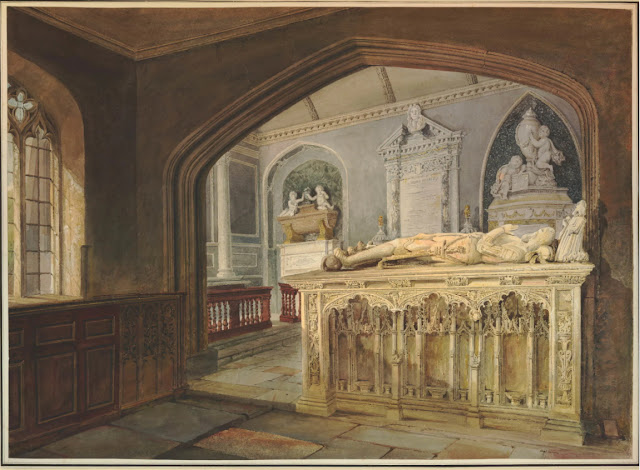 
The album from which this sheet was extracted is described in the posthumous catalogue of Sir Richard Colt Hoare's library as: 'Rural Scenery of Stourhead, consisting of 33 Magnificent Drawings, by P. Nicholson. Atlas size, bound in whole russia. A most Splendid Volume.' ('Catalogue of the Hoare library at Stourhead, co. Wilts. to which are added an account of the museum of British antiquities, a catalogue of the paintings and drawings, and a description of the mansion', London, 1840, p. 412).

Posted by David Bridgwater at 03:26