Joseph Wade the master carver, shown in the portrait below in undress,  holding a bust of Hercules, as a decorative mason  he collaborated with Richard Chichley ( another ships carver) on the continued building and elaboration at Greenwich Palace.

There is a reference to a Benjamin Wade carver, possible the father of Joseph Wade - Joseph Helby, Carver at Deptford and Woolwich. Asks for protection - Navy Papers, National Archives.

In Figureheads of the Royal Navy by David Pulvertaft 2011 it states that in about 1720 Wade was made Master Carver at the Royal Dockyards in Deptford and Woolwich and was paid hansdomely for the refurbishment of six royal yachts between 1724 and 1742 as well as the carved works on several new build warships.

There are numerous references to Joseph Wade in the ADM (Admiralty Royal Navy etc) records at the National Archives Here is a selection:

31 March 1718  Folio 129: Joseph Wade, Master Carver. Asks for protections for the men on the enclosed list, Carvers he employs at Deptford and the Watermen who carry his goods to that yard.

15 April  1724  Folio 235: Joseph Wade. Asks for an order for the Woolwich Officers to pay him more for his carving work.

12 May 1724 Folio 194: Woolwich Officers. Bill for the carved work on the Kent, Ludlow Castle, Weymouth, Looe and Rose by Joseph Wade.

Apr 19 1732  - Joseph Wade, Sr., Joseph Wade, Jr., Richard Chicheley, Master Carvers, Deptford, Woolwich and Chatham. Petition on behalf of William Smith and Widow Reed, Master Carvers of Portsmouth and Plymouth. They are suffering hardship because their bills are 4 years in arrears. In the time of King Charles the Second, Master Carvers had money advanced to them by the Government in proportion to how the work was progressing. Ask for payment.

25 May 1741 - Joseph Wade, Rotherhithe. Encloses an account of carved work done to a model of a first rate built at Deptford (not now attached). Request for an order for it to be surveyed and valued

Woolwich Officers. A bill for carved work on a model of a first rate by Joseph Wade.

Between 1726 and 1728 Joseph Wade worked in partnership with fellow-sculptor Richard Chichley on the ornamentation of the West Middle Front at Greenwich Palace. This work was very well paid. In 1729 he was paid £101 for his solo work on the South Pavilion of Queen Anne's Court - a sum including £8 per face for Corinthian Capitals, £21/107- for forty three modilions and £3 each for two scrolls, carved to a depth of two feet.

8 Faces of capitals carved after the Corinthian order at £7 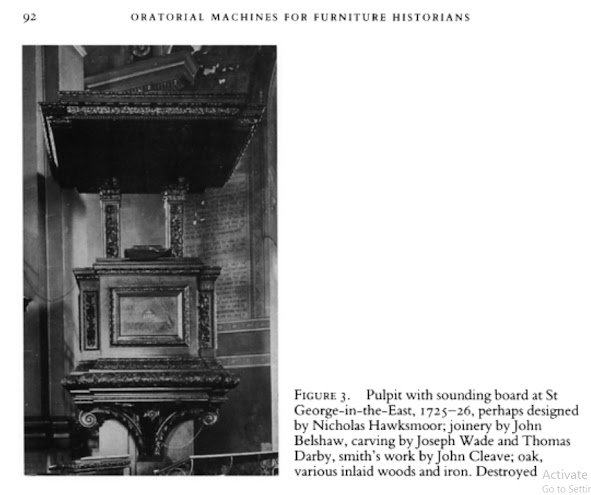 Information above from ORATORIAL MACHINES FOR FURNITURE HISTORIANS

In December 1728 Joseph Wade, King's Carver was paid £40 for having carved twenty shields for the great hall at Fishmongers Hall - Image from the journal of the Society of Heraldic Craftsmen, no 88, April 2015

Wade was paid £10 15s for two posts? in front of the Chapel porch at the Mercers Hall - I do not have the date; info from The Mercers Hall by Jean Imray pub. 1991.

On 29th of September 1741, in the Deptford Yard letter books, preserved at the Public Record Office, (ADM/106/3357) it gives an account of the charges of the not inconsiderable sum of £77 18s 4d for carving for a model of a 1st Rate ship by Mr. Joseph Wade.

1746 June 20 Woolwich Officers. Are enclosing an account of the late Joseph Wade's carved work of a model of a 1st Rate for use of the Admiralty. 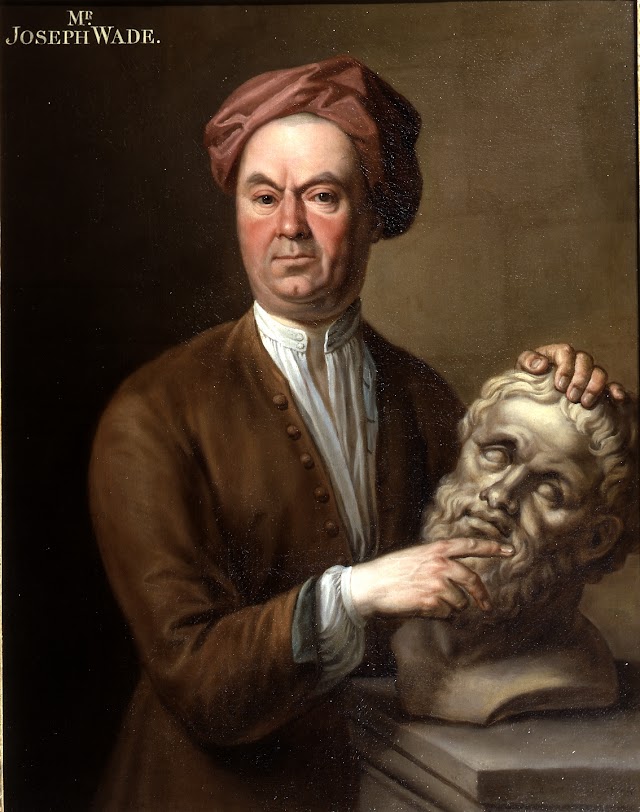 James (Jacques) Parmentier was born in Paris and commenced his career as a pupil of his uncle, Sebastain Bourdon. He was later to work with Charles Delafosse and collaborated with him on their major commissions for Montagu House. He painted two altar pieces for  Holy Trinity Church in Hull and St Peter's Church in Leeds. Thomas Howard, the Eighth Duke of Norfolk, commissioned him to work at Worksop Manor where he painted the staircase.

Note the portrait rondel held by the putto.

I will post more on Stanley in due course

The inscription suggests that it was erected shortly after the death of Samuel Wade son of Joseph Wade  in 1743.

This fabulous monument is perhaps unique in its high Rococo, asymetrical style - a cursory trawl through the the Church Monuments Gazeteer website fails to bring up anything quite like it. Making it very difficult to suggest an author. 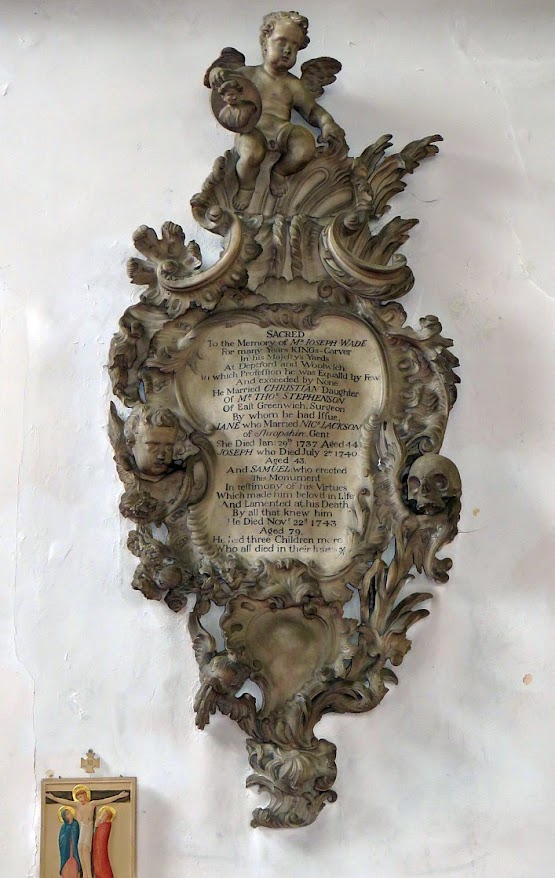 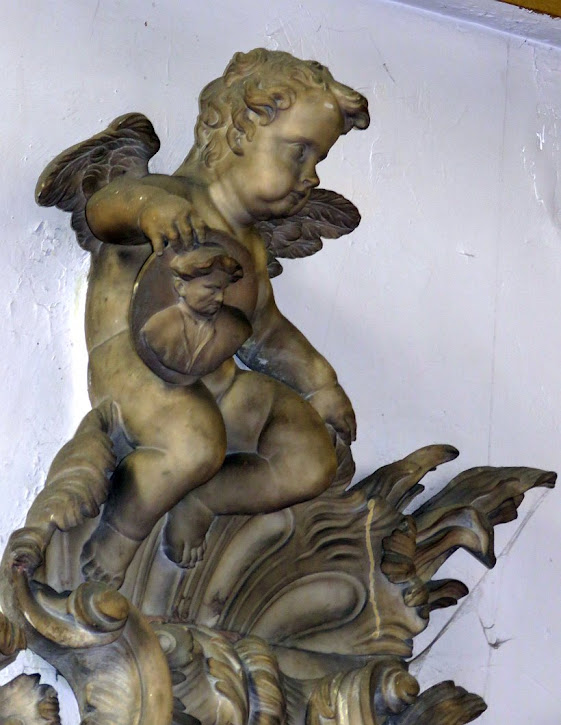 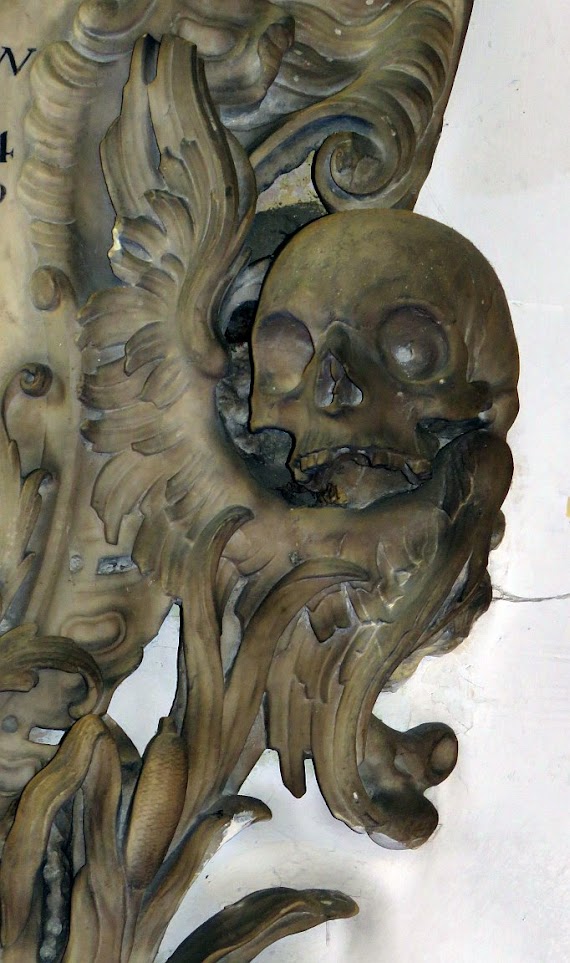 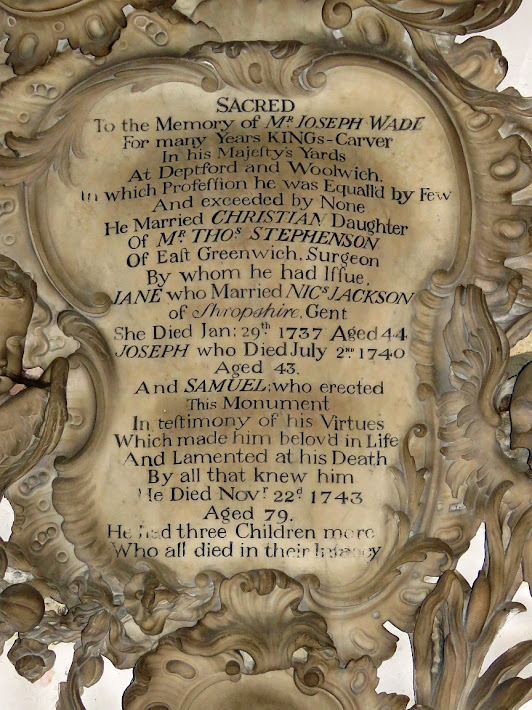 _________________
This remarkable monument has recently (2020) been cleaned by Charlotte Okparaeke BA (Hons) Conservation. of the City and Guilds of London Art School. 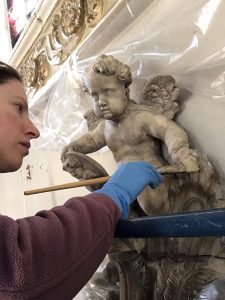 For Rococo Ornament in England see -
https://www.riha-journal.org/articles/2014/2014-jan-mar/special-issue-art-design-history/puetz-drawing-from-fancy/#__RefHeading__388999_623944600
_______________________________
This is probably not the place to go into the emergence of the Rococo in England and the influence of the earlier French and German engraved sources, but the works of Thomas Johnson, William Delacour Henry Copland and Matthias Lock have obviously influenced the design of the Wade Monument. 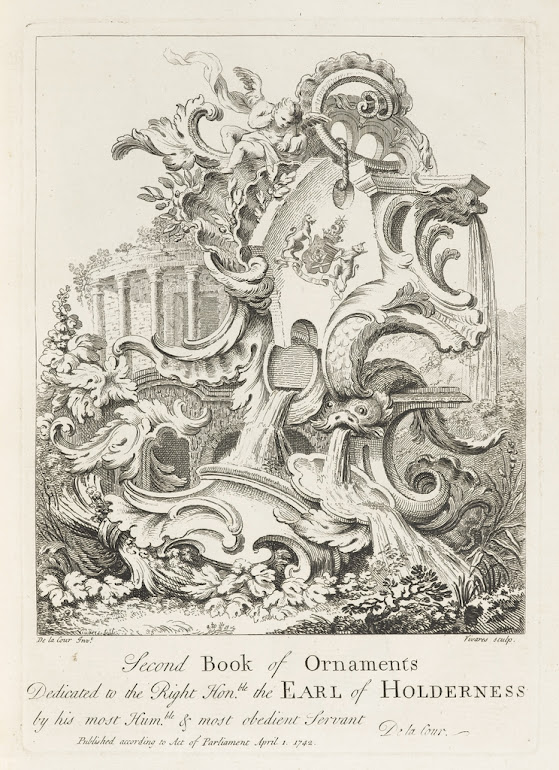 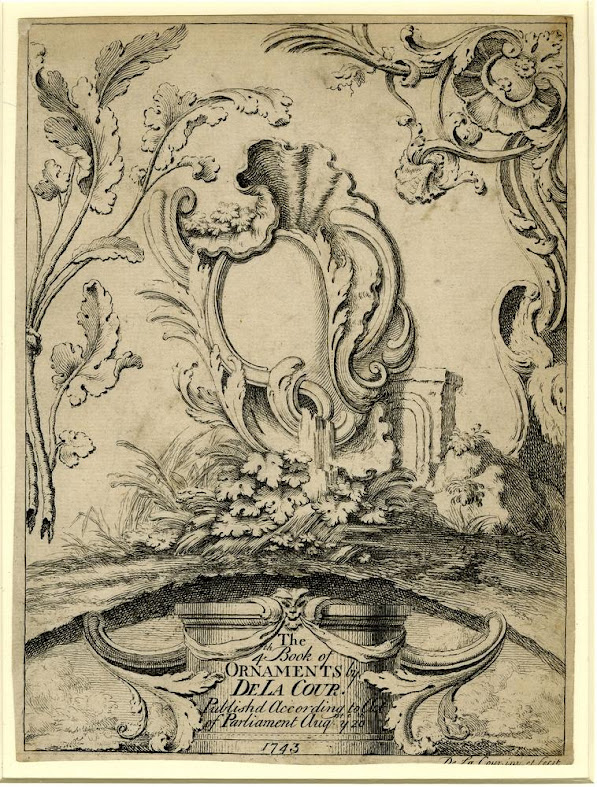 Portrait, decorative and scene painter, and ornamentalist. Presumably French origins; 1740, first documented as a scene painter for London theatres; published eight books of ornament between 1741 and 1747, engraved by himself, Vivares or Robert White;1752, calls himself 'portrait painter in oils and pastels'; 1753, in Dublin; in Edinburgh by 1757 where he was still working as a scene painter; 1758, working for John Adam as a decorator (see correspondence in Saltoun papers, NL Scotland); 1760, first director of School of Design set up by Lord Kames; 1761, executed large wall paintings at Yester; many portraits in Scottish collections dating from 1758-65; d. Edinburgh 1767. 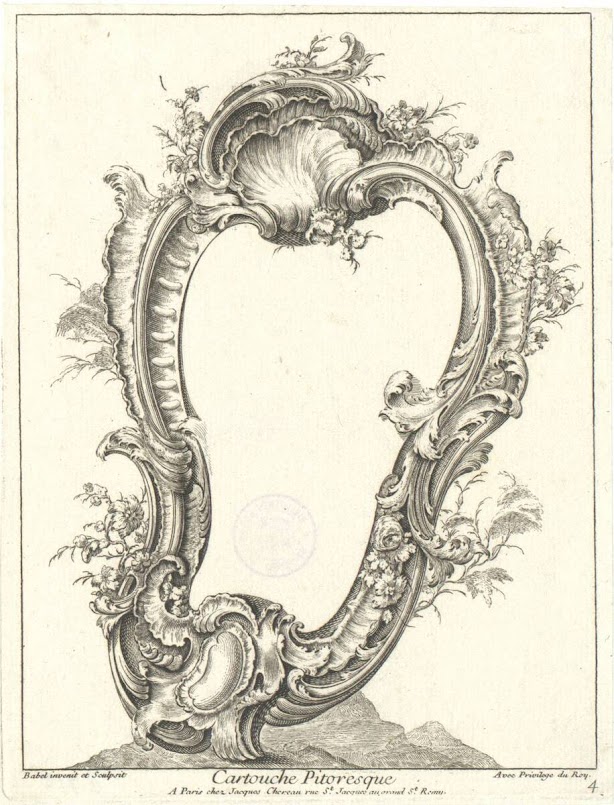 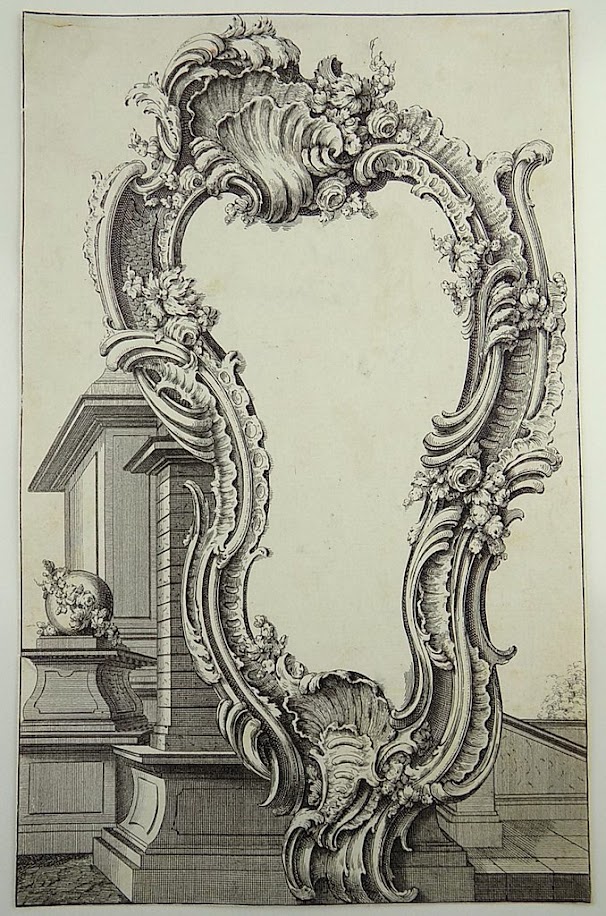 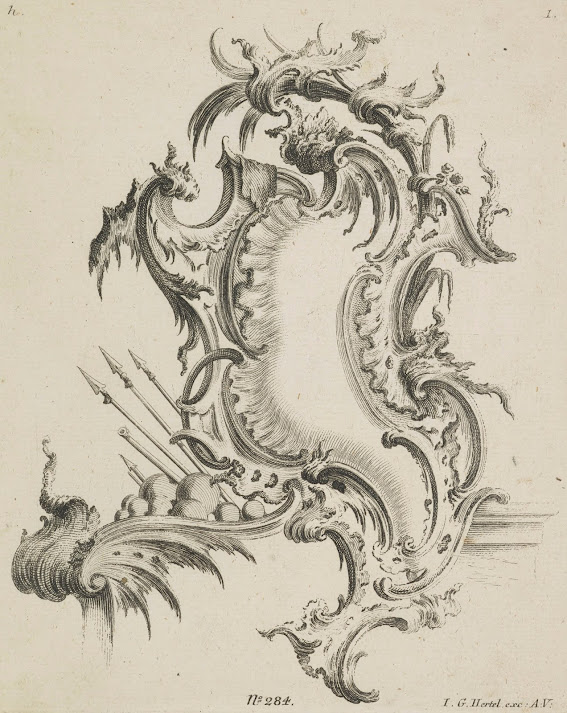 The website of St Mary's, Rotherhithe suggests that the raredos in the church was also carved by Wade 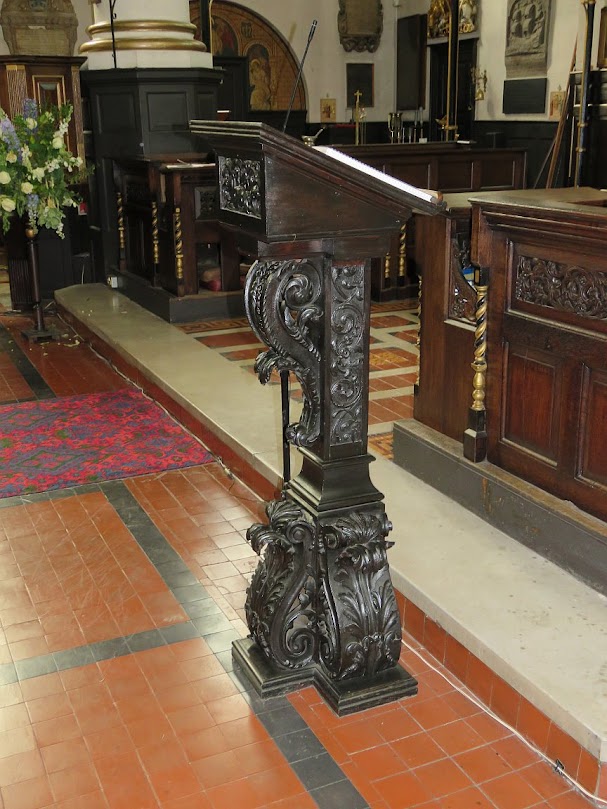 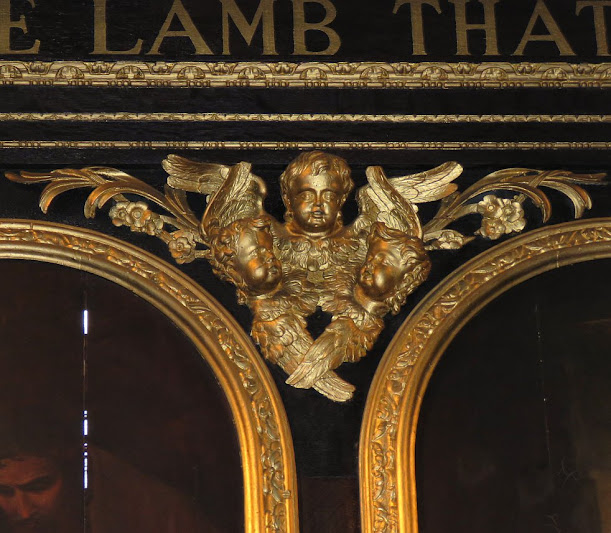 Unfortunately I have had to rely on external web sources for the photographs but I hope to visit the church and take my own photographs in due course.

The Will of Joseph Wade of Rotherhithe 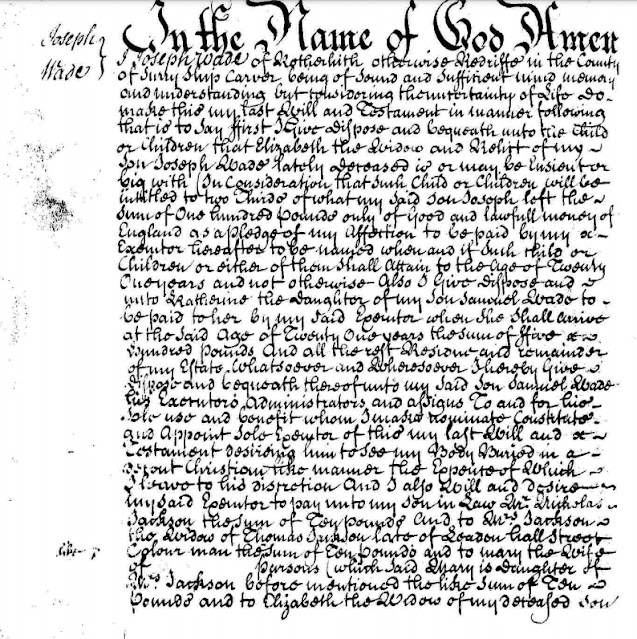 Posted by David Bridgwater at 02:57