Richard Miller Terracotta at Queen's College, Oxford and Marble in the Vestry of St Martin in the Fields by Michael Rysbrack


The subject of this bust is something of a mystery - the extracts provided below tell us as much as we know.

He is recorded in the Album Benefactorum of Queen's College, Oxford in 1716 - 17 as donating £100 towards the building of the Chapel.

He was also a great benefactor to the Parish of St Martin's in the Field Westminster providing £500 for the Charity Schools, £300 for the Free School and Library and £300 for the building of the Vestry House.

In his very short Will (Prob 11 / 600) written 4th October 1718, Richard Miller of South Hinksey, left to his daughter Mary, his tenanted house in St Thomas Parish, Oxford he also bequeaths her all his goods and chattels - to his other daughter and son Matthew he left one shilling!

I am very grateful to Graeme Salmon of Queens College, Oxford for permission to photograph this bust and for his enthusiastic welcome and assistance when visiting Queen's College.

The marble bust is in the Vestry of St Martin's in the Fields, Westminster.

I am also very grateful to Helena Tarrant, Church Coordinator at St Martin's in the Fields for obtaining permission to photograph the marble and for all her assistance, particularly for finding a ladder so that the bust could be inspected at close quarters.

Also thanks are again due to Dana Josephson for suggesting and aiding me with this project.

There are brief notes and photographs of the two busts in Michael Rysbrack, Sculptor by M.I. Webb pub. Country Life, 1954.

The terracotta bust  at Queen's was formerly mistaken for a bust of  Sir Christopher Wren and prior to that to as a bust of Voltaire.

The relationship between these two busts was first noted in an article by Katherine Esdaile in The Architectural Review of 1944. 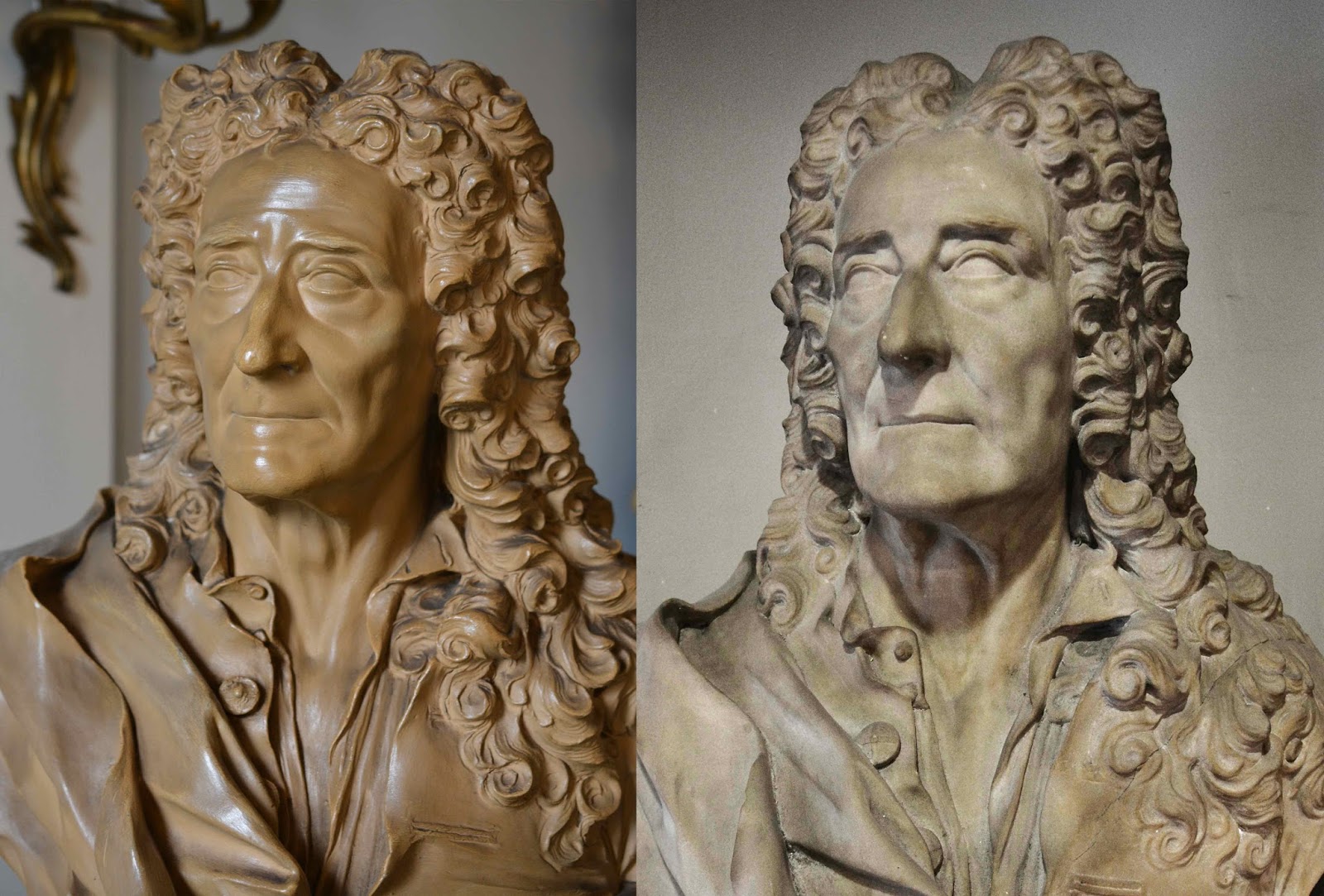 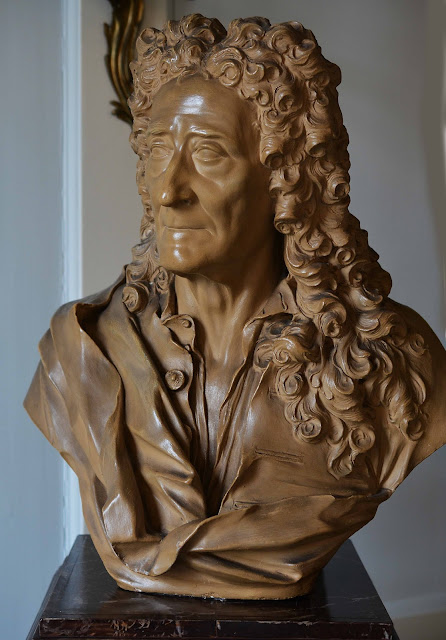 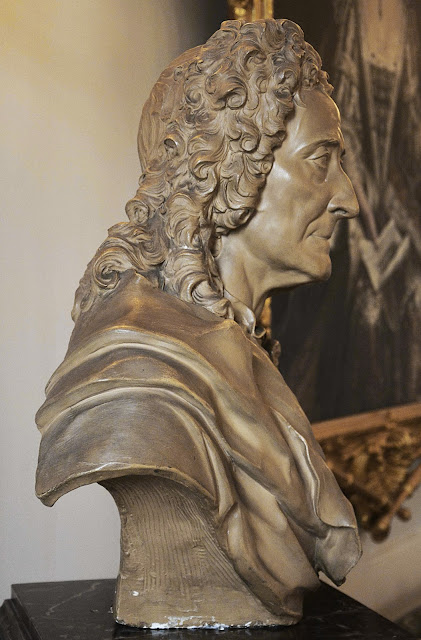 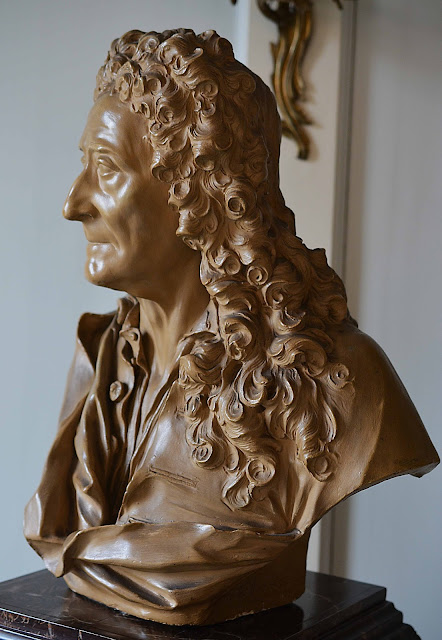 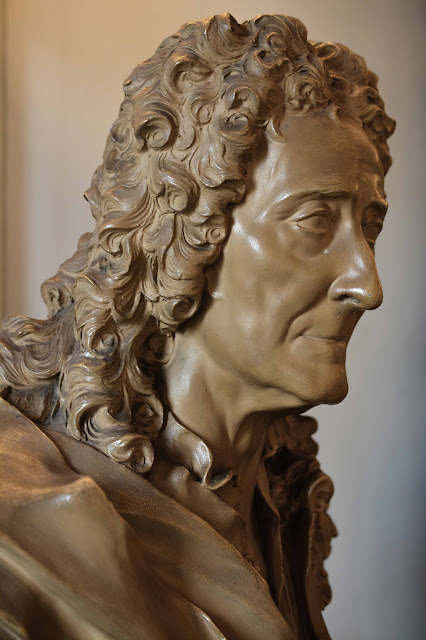 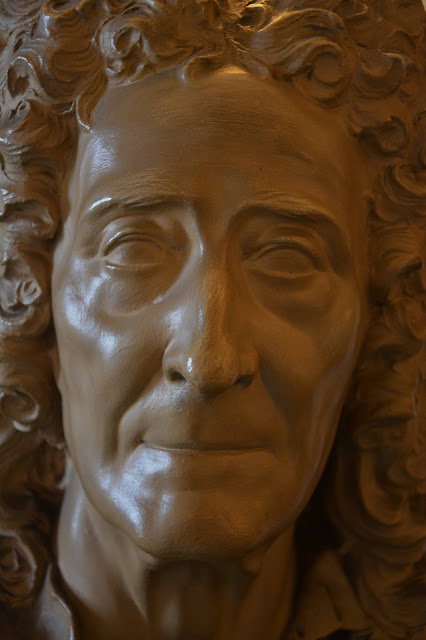 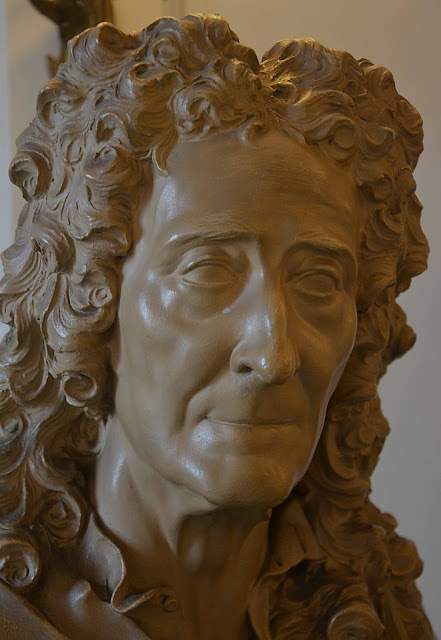 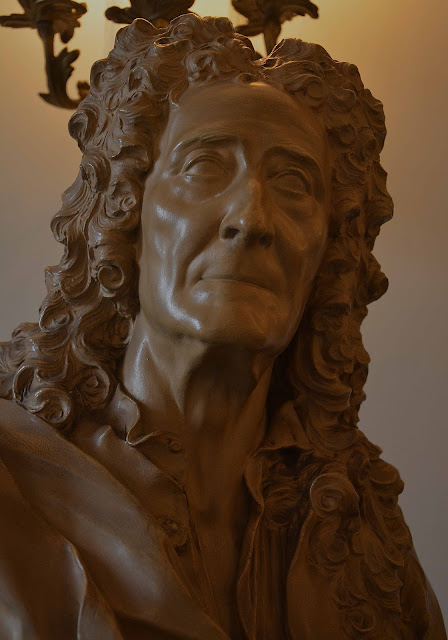 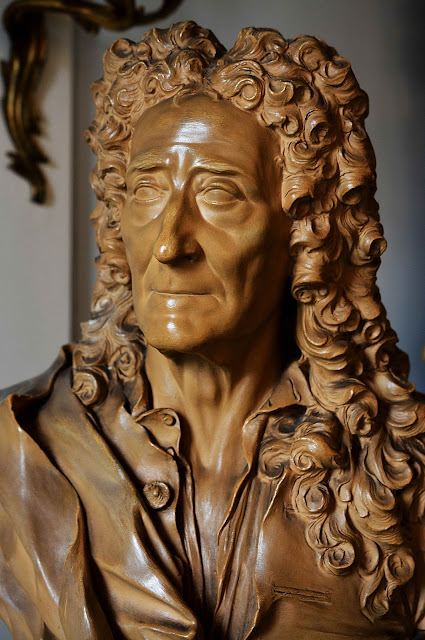 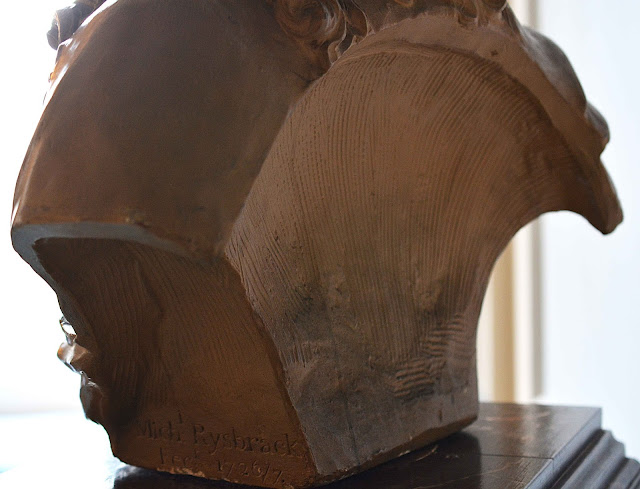 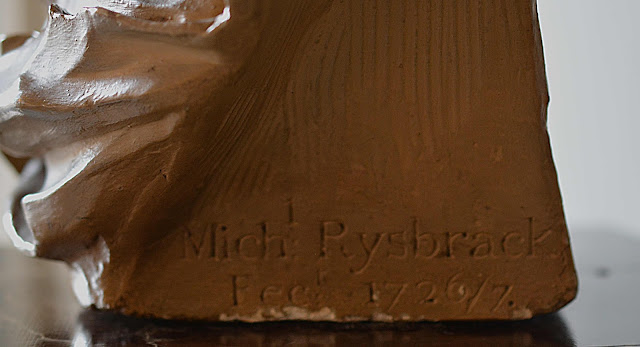 Extract below from Catalogue of Portraits in the Possession of the University, Colleges, City and County of Oxford. Mrs Reginald Lane Poole, Vol II, pub Clarendon Press, Oxford. 1925. refering to the terracotta bust at Queen's College, Oxford.

The Queens College bust of Miller in the Library
Photography by Henry Taunt, 1906.
Photograph from Historic England Archive


The Marble Bust of Richard Miller by Michael Rysbrack

Currently located above the front door, in the vestibule
of the Vestry of St Martin's in the Fields, Westminster. 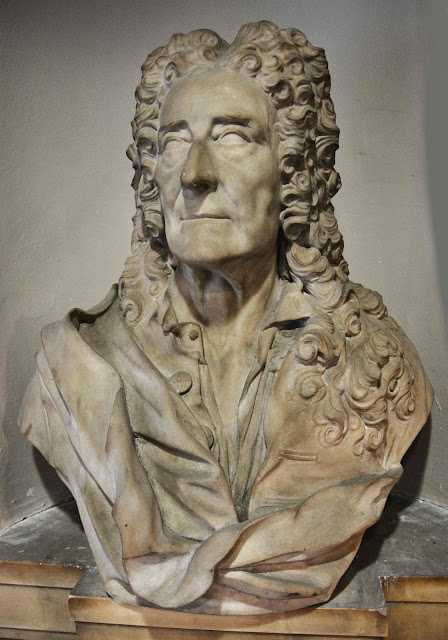 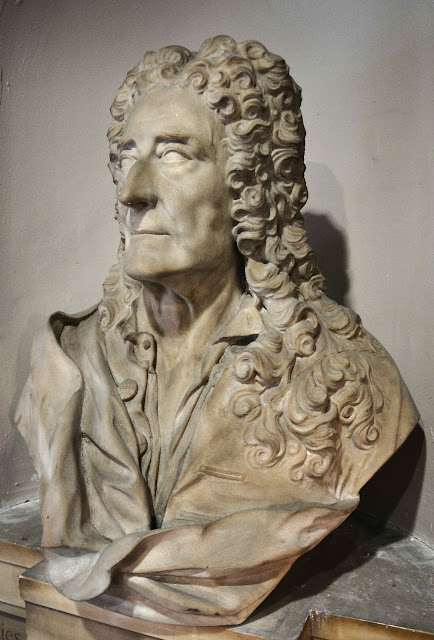 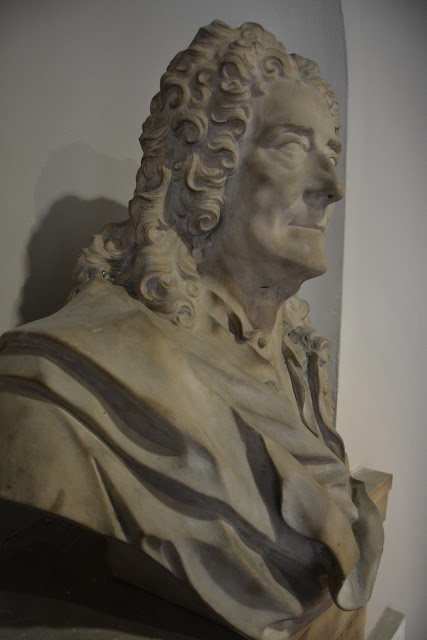 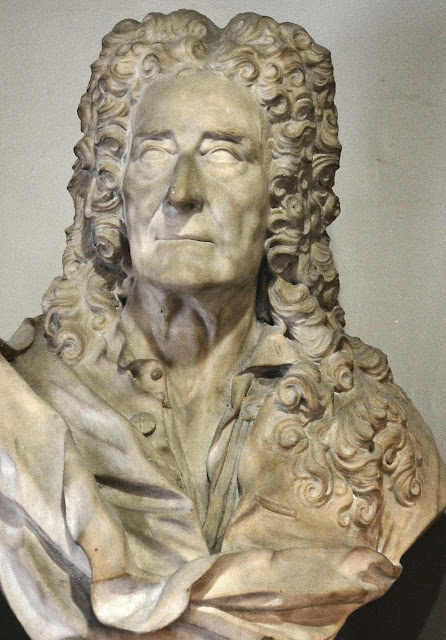 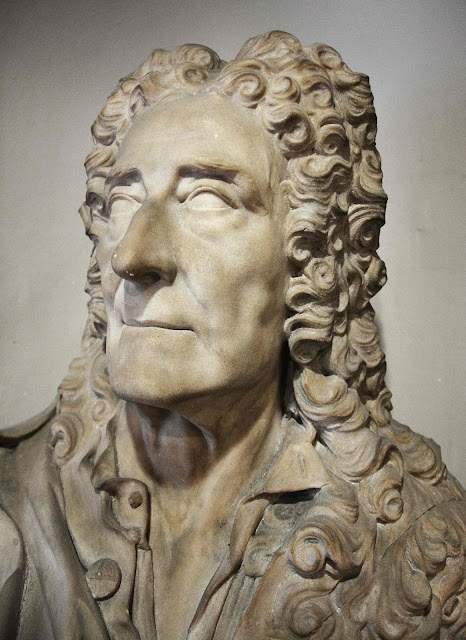 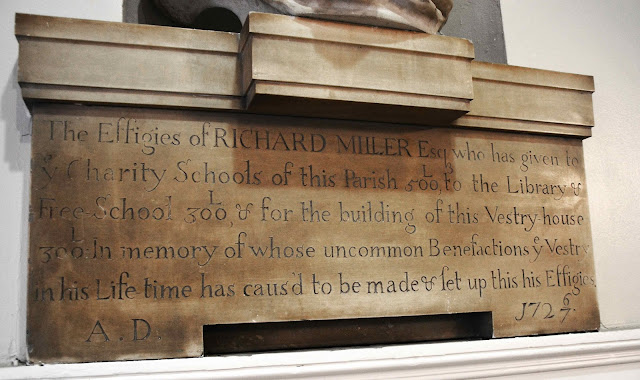 All photographs here taken by the author.
Something of a challenge to photograph this bust - very little light.
Fortunately Helena Tarrant of St Martin's was able to commandeer a set of step ladders.

The inscription on the back of the canvas, which has been relined probably in the nineteenth century, may be a copy of some original inscription erroneously transcribed as 'T. Weurzag Se' and which Poole interprets as standing for 'T Murray Fecit'.

The attribution to Murray has been challenged.

before 1724.
Queen's College, Oxford.
Given to the College by Richard Miller. 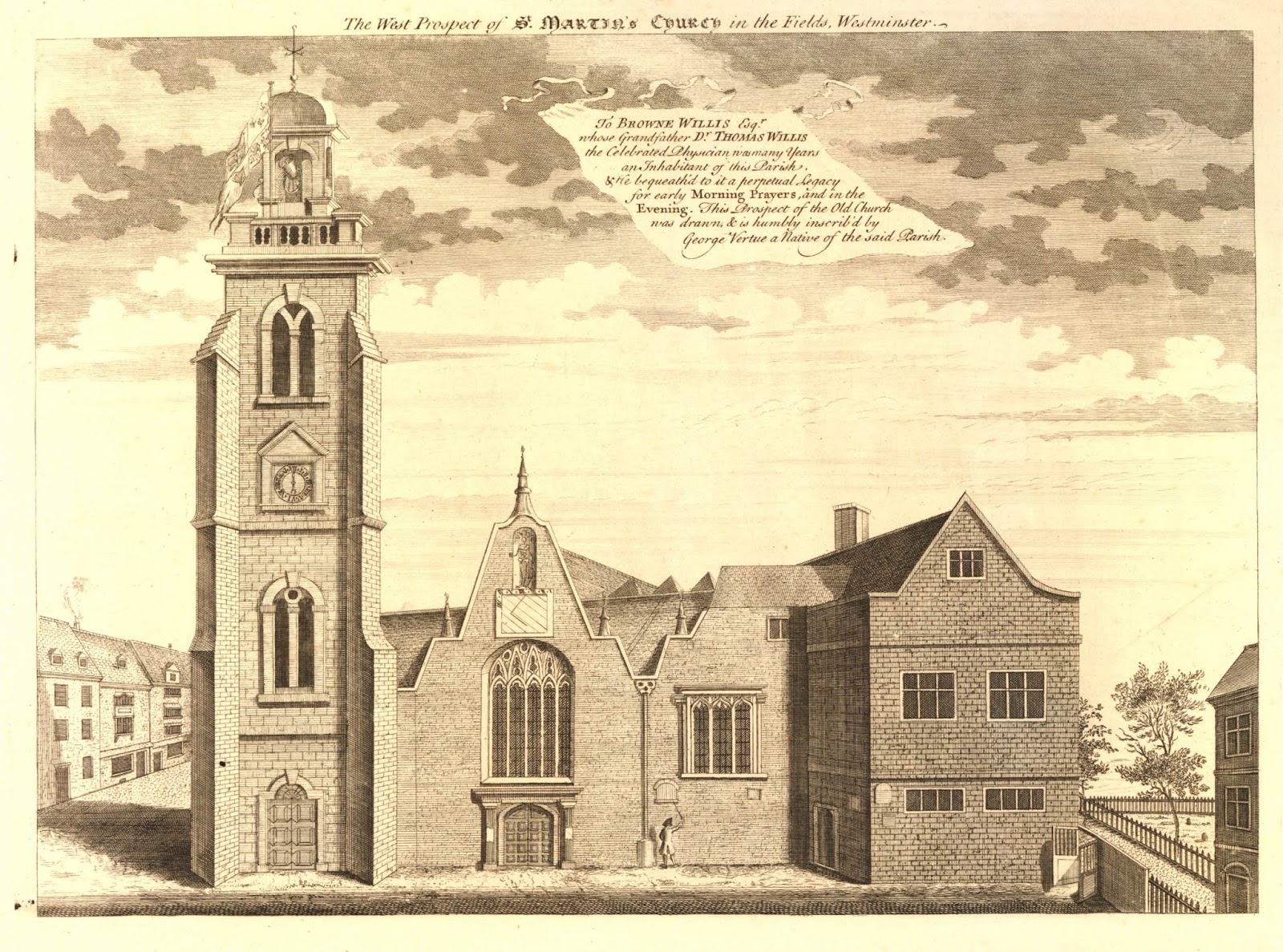 View of the West Front of the Parish Church of St Martin's in the Fields, Westminster before demolition and replacement.
Engraving
George Vertue
1720.


The Vestry House is on the left hand side, on the North side of St Martin's Place. 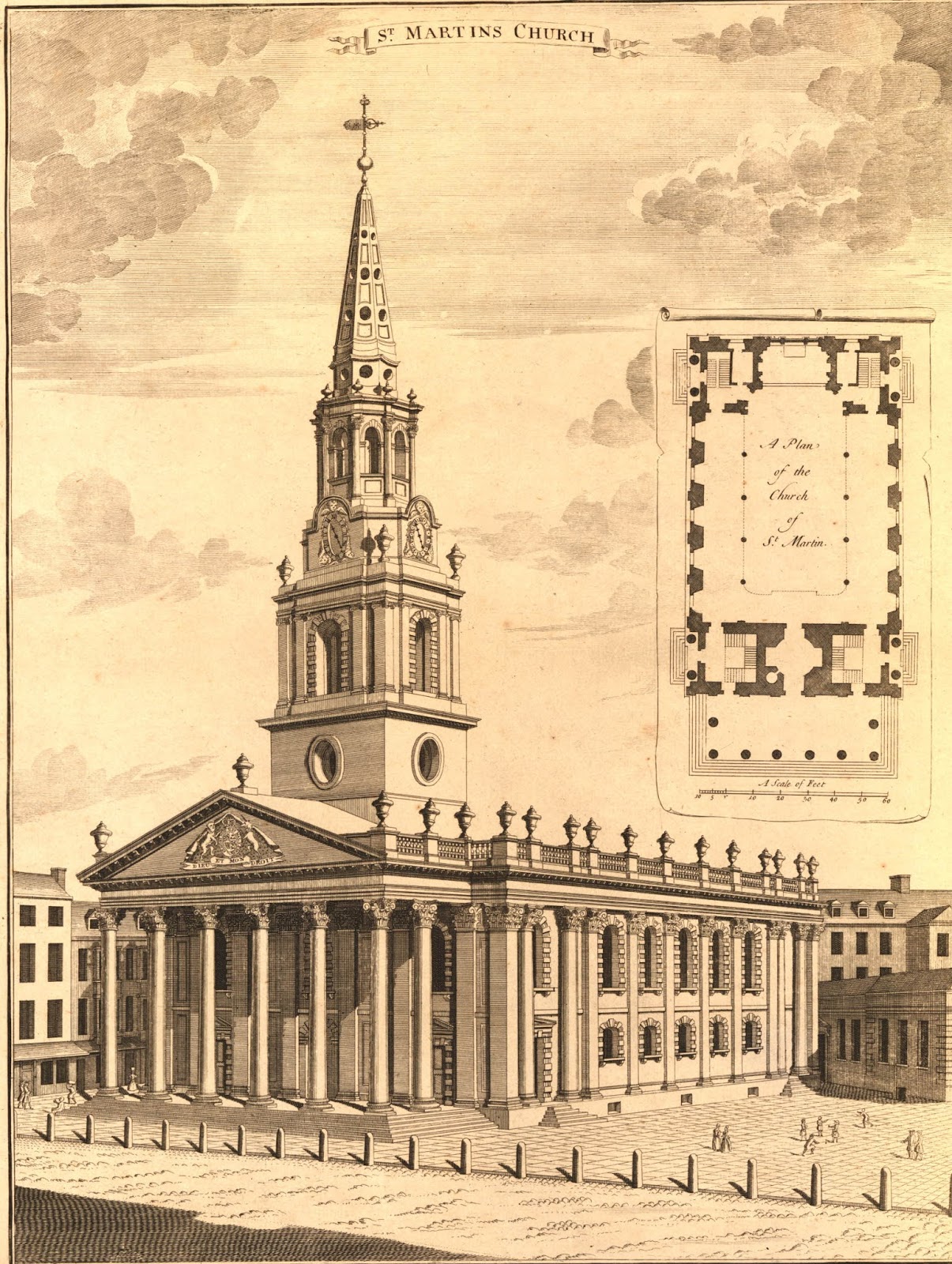 St Martin's in the Fields.
Westminster.
View of the South and West Fronts.
1754
Image - British Museum.

The Vestry House to the lefdt is on the North side of St Martin's Place.


The earliest record of a parish school at St. Martin's is an entry in the churchwardens' accounts for 1571: "payd to geyls quarrell for setinge the scolhowse wyndowe & for vj newe q'rels iijs ijd." Ben Jonson received his early education at this school, which was probably situated beside the church. In 1614–15 a new schoolhouse and vestry room was built adjoining the church on the south side. This building is shown in Vertue's drawing of the old church .

The Vestry met in the upper room, the school being housed on the ground floor until 1693, when the scholars were transferred to Archbishop Tenison's school (see p. 113). The old schoolroom was used as a session house from 1706 until the church was pulled down. A new vestry hall was built at the south-east corner of the churchyard in 1728, and demolished in 1828. 113–4).

The buildings in St. Martin's Place which comprise the Vestry Hall, Vicarage, and National Schools were erected circa 1830 as part of the Charing Cross improvement scheme. The façade of the schools bears the inscription "St. Martin's National Schools. Built by Subscription on Ground the Gift of His Majesty King George IV. MDCCCXXX." (fn. n1) By the deed of grant, dated 20th July, 1833, the Crown conveyed to the Vicar and Churchwardens a piece of ground on the north side of the churchyard 98 feet by 28 feet together with the school building lately erected there to be used as a National School for the education of poor children of the parish. A nominal rent of £1 per annum was to be paid.

St Martin's in the Field was designed by James Gibbs. 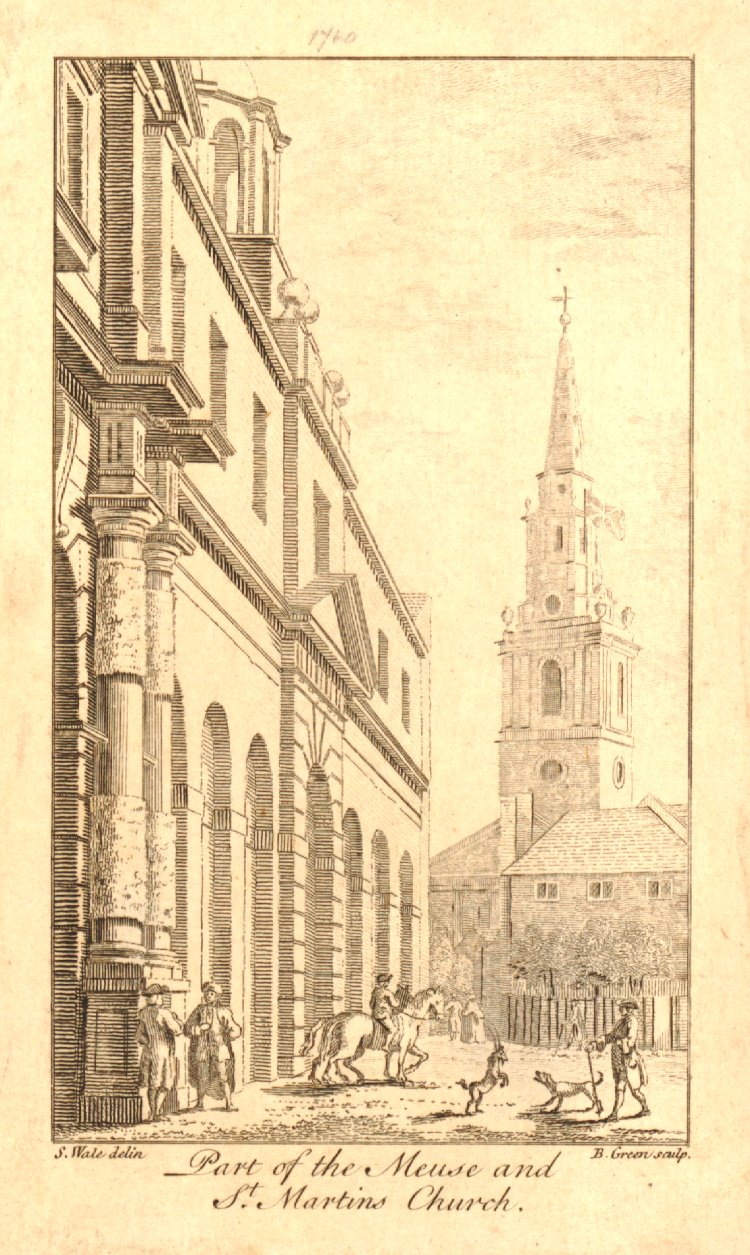 St Martin's in the Field from the West with the King's Mews in the foreground
This was replaced by the National Gallery in 1834.

Posted by David Bridgwater at 04:42