Some Further Examples of Sculptures of George II. 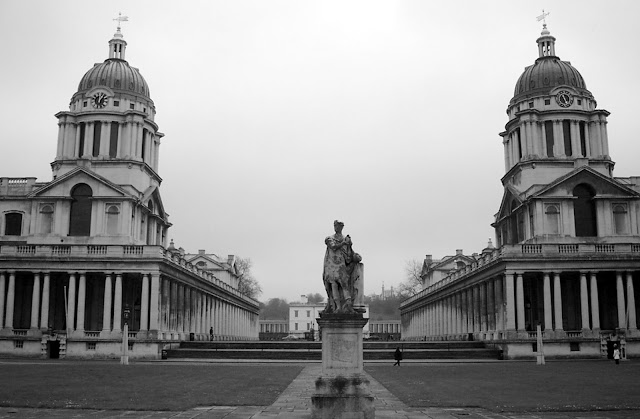 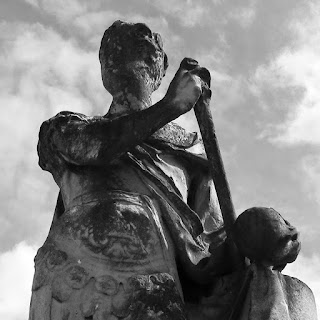 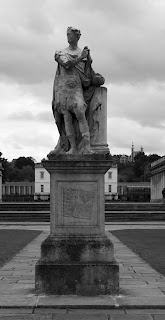 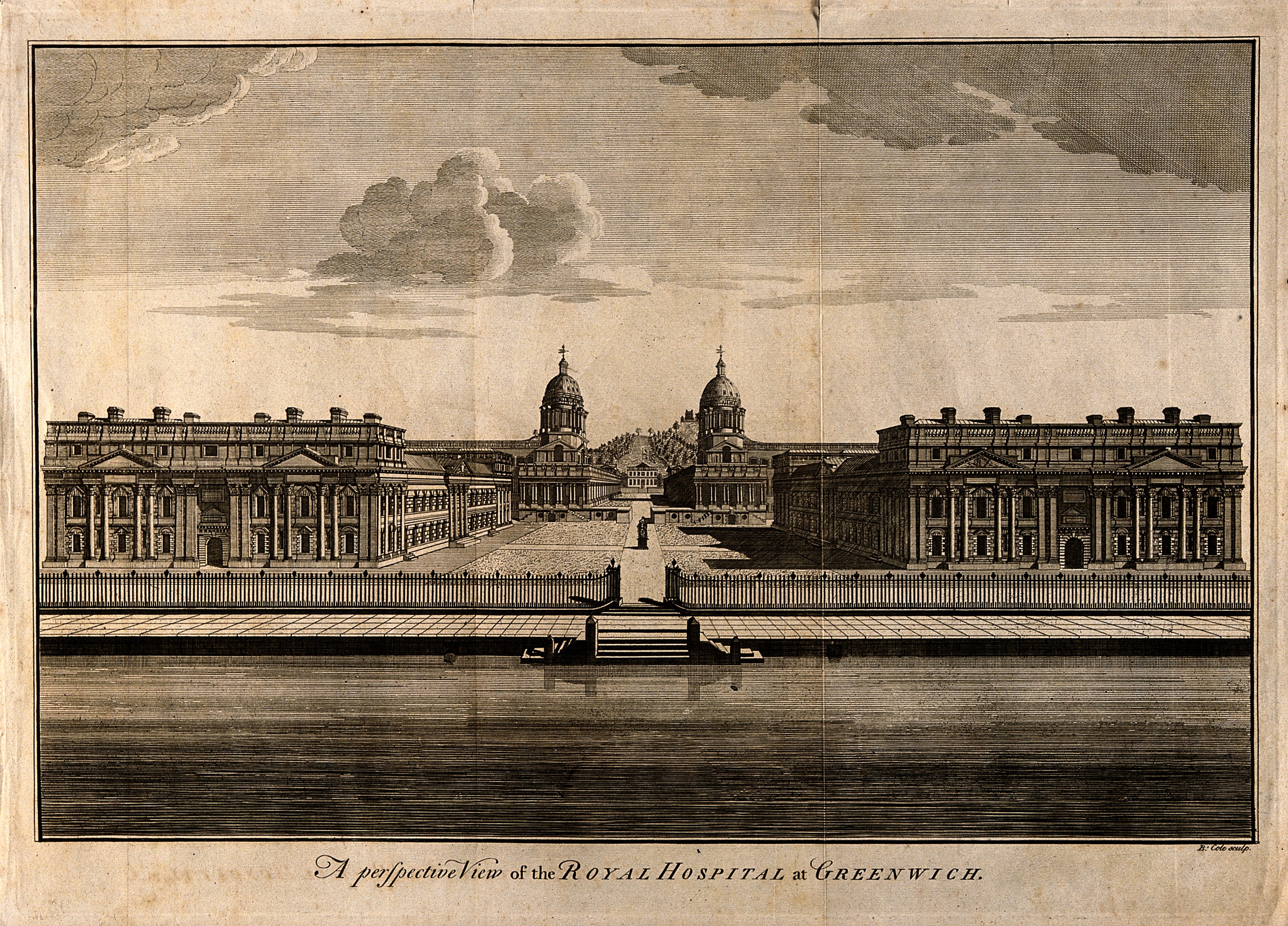 The Inscription on the pedestal.

{On the south face of plinth:}

{“To the almighty emperor, King George II of Britain, under whose direction and patronage this magnificent hospital, established by the king’s own predecessors to alleviate the burdens of retired seamen, is rising up, expanding and becoming more splendid every day.  Sir John Jennings, governor of the same establishment, placed this image in due reverence for the King and for the love of his country in the year of our Lord 1735.”}
{On the east face of plinth:}

{“Here is a rest for old age, an end for someone who is tired of sailing the seas and fighting.”  From Horace’s Odes (Book 2 Part 6).}
{On the plinth, north (river) face:}
HIC AMES DICI PATER ATQ(UE) PRINCEPS
{“Here may you delight in being called our father and prince” From Horace’s Odes (Book 1 Part 2) and was originally addressed to Emperor Augustus.}
{relief carving of the Royal Standard 1714-1801}
IMPERIUM PELAGI
{“The dominion of the sea”}
{On the west face of plinth:}
FESSOS TUTO PLACIDISSIMA PORTU ACCIPIT
{“This most peaceful place welcomes those who are weary to its safe haven.”  From Virgil’s Aeneid (Book 3 Chapter 4).}

The King's Pillar is a monument to George II, It consists of a Corinthian column over 30 feet high topped by a statue over seven feet high of George in his state robes. The monument was erected by Lord Cobham in 1724, when George was still Prince of Wales, and it was originally  located just to the south of the Great Cross Walk, one of the major avenues in the garden layout of Charles Bridgeman and Sir John Vanbrugh.

The King's Pillar remained in place until 1840, when it was taken down and the statue moved north of the house. The statue was sold in 1921.

In Tthe Stowe sales of the 1920's  most of the statuary was sold. Surprisingly, both George I and Princess Caroline survived.

The statue of Princess Caroline and the equestrian King George I waere restored in 1992 as a part of the English Heritage grant programme.

George II, however, was bought by Sir Phillip Sassoon, and now forms an integral part of the wonderful garden at Port Lympne (below).

Another version of the copy of this statue was recently on the market. 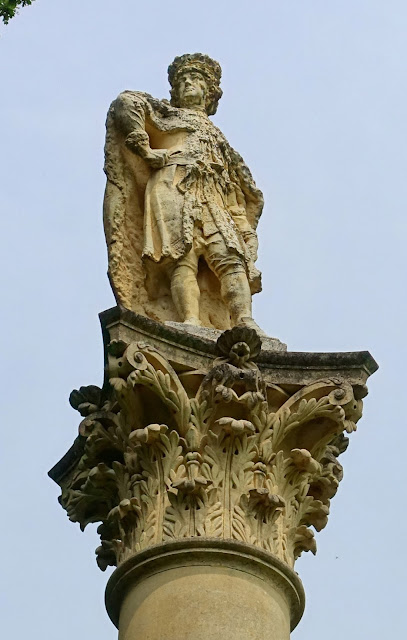 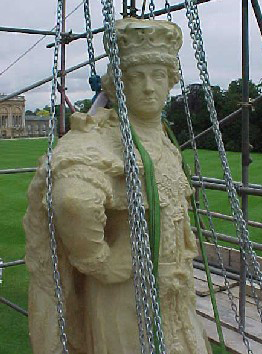 After  160 years, a replacement King's Pillar is now back in the place of the original in the garden. The National Trust completed this project during the summer of 2004. The

Originally, the monument to his wife, Queen Caroline, was also nearby: downhill and to his left, in a small theatre and surrounded by statues of shepherds and shepherdesses. She and her entourage also faced the Rotunda. The Queen's monument was subsequently moved in the 1760's to the west side of the Home Park on the original site of the Belvedere, or Temple of Fame, where it still stands. The reflecting pool that lay between the Queen's monument and the Rotunda was filled in at that time.

The Seeley Guidebooks provide the following translation of the above:

Under the care of Cæsar's scepter'd hand,
With strength and fame increas'd, this favour'd Land
The Majesty of her vast Empire spread,
From the Sun rising to his Western bed.

This translation, and the way in which the quotation is lifted out of the context of the rest of the ode, obscure an underlying concern of Horace's about Augustus Caesar (and perhaps a similar concern of the Temple family about George II). While the Latin name and the power of Italy have increased in size, Horace says, the dignity and the reputation of the government have been laid low. The power of Caesar is shown in contrast to the ideals of the Roman Republic, a tension that reappears a number of times throughout the garden.

The present owner has kindly allowed the National Trust to make a cast of the statue in reconstituted Portland stone, and this is funded by the Trust's continuing Stowe Statues Appeal. It is not known what happened to the original pedestal and pillar, but from the diameter of the cornice found by the archaeologist, one can calculate the height of the original column with the use of classical rules. The restored pedestal, column, and statue measure 13.5 meters.

George II
John van Nost III
This has been atributed to Benjamin Rackstrow of the Strand but I remain sceptical.
Lead
Destroyed 1937
Formerly on The Weavers Hall, The Coombe, Dublin.

This is my particular favourite.

see my blog post for much fuller details of this statue

Posted by David Bridgwater at 06:06