The British Museum and Garrick Club Terracotta Busts of Shakespeare by Roubiliac (part 3). The Davenant Bust and its 'Discovery'

The Garrick Club 'Davenant' Terracotta bust
of William Shakespeare
and the story of its Discovery.
The myth of its discovery bricked up in the Dukes Theatre in Portugal street has been exploded by Marcus Risdell who has discovered documentary proof that it came from the garden of 39 Portugal Row - the terrace on the South side of Lincolns Inn Fields.

The 'Davenent bust' - is so called after Sir William Davenant (1606 - 68) who was the proprietor of the Dukes Theatre in Portugal Street, Lincoln's Inn Fields 1660 until his death in 1668, (Portugal Street runs parallel with Portugal Row the South side of Lincolns Inn Fields).
This Communication below from Marcus Risdell, Curator of Works of Art at the Garrick Club.
'Roubiliac original terracotta bust 1) Garrick Club bust, (rediscovered by William Clift, first curator of the Hunterian Museum) in 1834 (source is Clift's papers held at Royal College of Surgeons) it was found in the garden of No 39 Lincoln's Inn Fields by a water pump in a position I have identified in surveys made by the Royal College of Surgeons to have been right by the main entrance. It became known through association of the theatre as the Davenant Bust, but as we now suspect was sited at the theatre by Henry Giffard who attempted the last theatrical season there in 1742-43
Incidentally Giffard also used a full size Scheemakers as a pantomime stage prop at his previous theatre. Goodman's Fields where he first put on Garrick. This I covered in the catalogue: The Face & Figure of Shakespeare at Orleans House Gallery. Anyway I digress: the bust passed to Professor Owen who showed it at the Crystal palace, where it came to the attention of the Duke of Devonshire who bought it and gave it to the Garrick Club, who incidentally used to use it as a door stop'.
Not an unusual fate for portrait busts - the  16th century Lumley / Pomfret marble bust of Henry VIII suffered similar humiliation whilst it was in the Ashmolean Museum offices, until rescued in the mid 20th century ( communication Michael Vickers).
__________________________________________
It was until very recently, widely believed that this Roubiliac bust had been made in the 17th Century - a story widely promoted is that the bust had originally been discovered by workmen, during the demolition along with a bust of Ben Jonson, in a niche above what had been the stage door where it had been bricked in after the Theatre had become a barracks in 1732.
Originally built as a real tennis court, it was used as a playhouse during two periods, 1661–1674 and 1695–1705. A Real Tennis Court is about 70ft x 30 ft.

During the early period, the theatre was called Lincoln's Inn Fields Playhouse, also known as "The Duke's Playhouse", "The New Theatre" or "The Opera"  - it opened on 28 June 1661.

The building was demolished and replaced by a purpose-built theatre for a third period, 1714–1728.
The building later became an Auction room and was opened as The Salopian China Warehouse in 1783 for Thomas Turner's Caughly porcelain (who first produced 'Willow Pattern' china. From 1794 - 1847 it was the warehouse of Copeland and Spode. It was demolished in 1848 to make way for an extension to the Royal College of Surgeons.

There is mention of the  'remarkable fine' terracotta bust in the John Stanley sale at Christie's in his Great Room in Pall Mall of 24 June 1786 to be sold alongside busts of Handel and Milton. (Clipping from Morning Post and Advertiser below).
It is my belief that this refers to the Garrick 'Davenant' bust of Shakespeare.
Notice of the Stanley Sale at Christie's in Morning Post and Advertiser 22 June 1786.
Burney Collection. 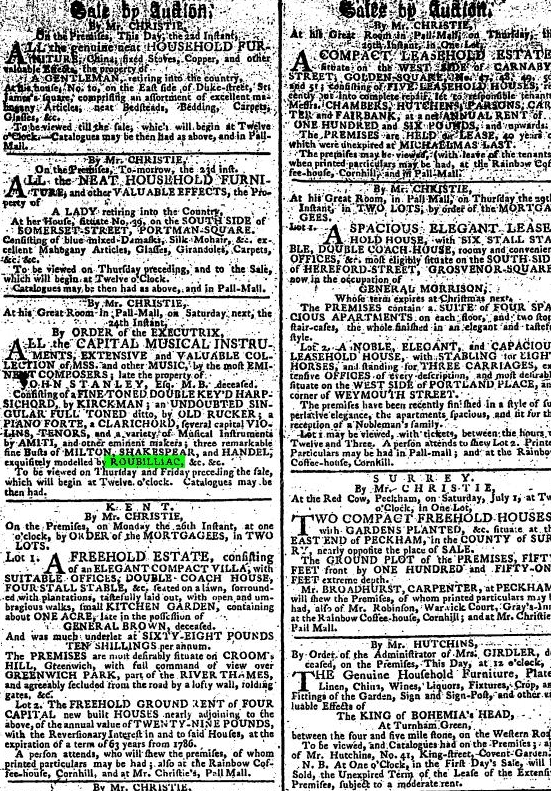 A fascinating snippet  which refers to busts of Milton, Shakespeare and Handel 'exquisitely modelled' by Roubiliac. The wording suggests that these three busts were terracottas modelled by Roubiliac.
This is all the more remarkable given that John Stanley (1712 -1786), master of the Kings music was blinded in accident at the age of two.
John Stanley began a partnership with John Christopher Smith Jnr. the former amanuensis of Handel after the death of Handel in 1760.
As the Stanley bust has 'disappeared' it is tempting to suggest that this bust is that discovered by the pump in front of 39 Lincolns Inn Fields by William Clift of the Royal College of Surgeons in 1834.
It should be noted that the dress on the two Roubiliac terracottas of Shakespeare, apart from the collar is very close to the terracotta bust of John Ray in the British Museum which was purchased at the Roubiliac sale by Dr Matthew Matey - another example of  Roubiliac recycling his designs. He uses the same basic bust for his portraits of Jonathan Tyers and Henry Streatfield.

For more on the Roubiliac busts of  Ray, Tyers and Streatfield, see:-


http://bathartandarchitecture.blogspot.co.uk/2015/07/jonathan-tyers-and-his-bust-by-roubiliac.html
So far no other  examples of this version of the Roubiliac busts of Shakespeare in Terracotta, Marble or Plaster have reappeared.
See - Louis Francois Roubiliac by Katherine Esdaile, Pub Oxford 1928, page128. 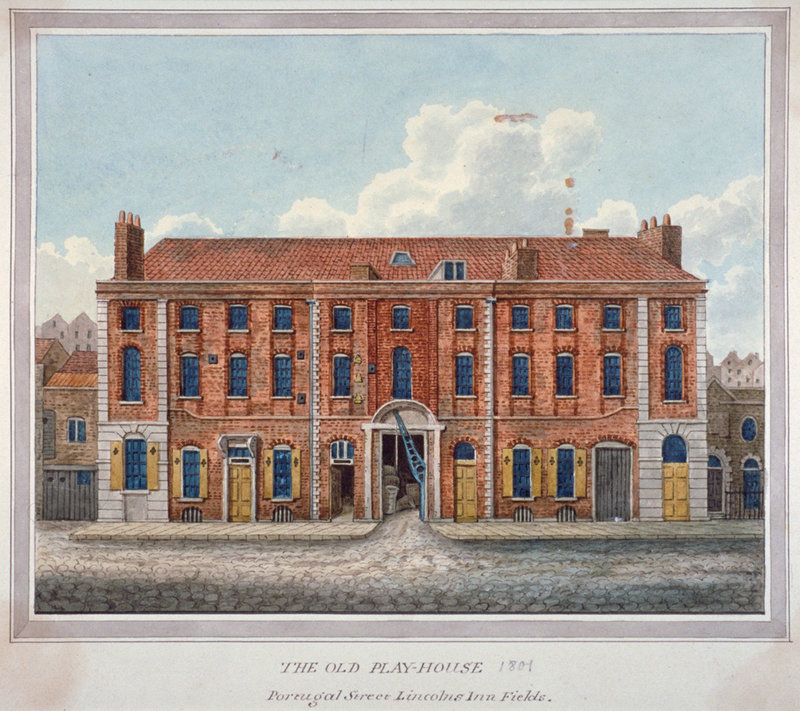 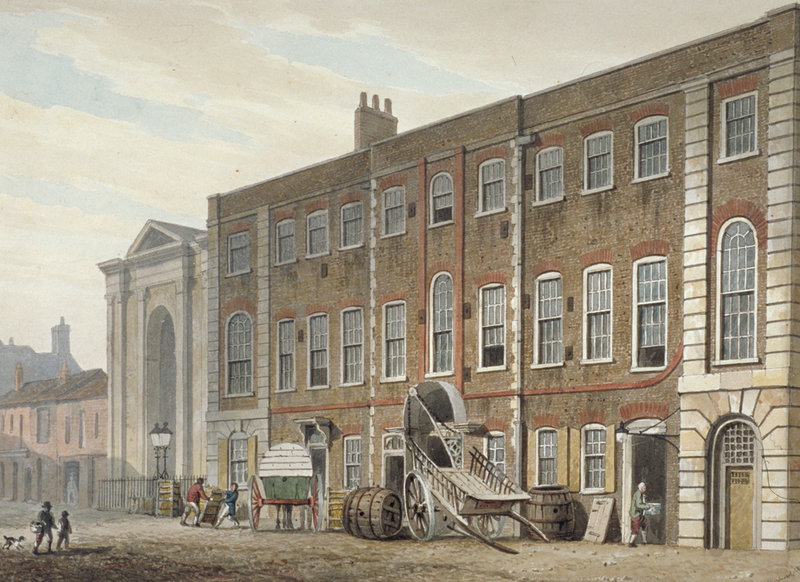 Another view of the Salopian China Warehouse,
George Shepherd
circa 1816. 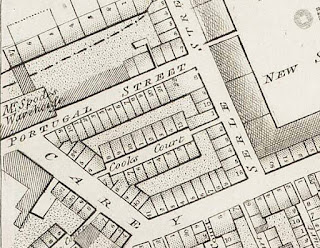 Above, due North and running parallel is Portugal Row, the South side of Lincolns Inn Fields Number 37 appears to be linked with the warehouse. In 1800 the College of Surgeons removed from their premises in the Old Bailey to No. 41, Lincoln's Inn Fields going on to eventually occupying nos. 39 - 43. 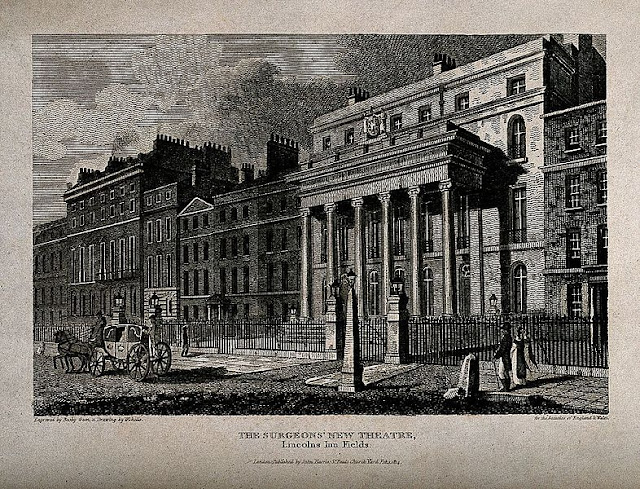