The main difference is in the elaborate van Dyck style lace collar on the terracotta. 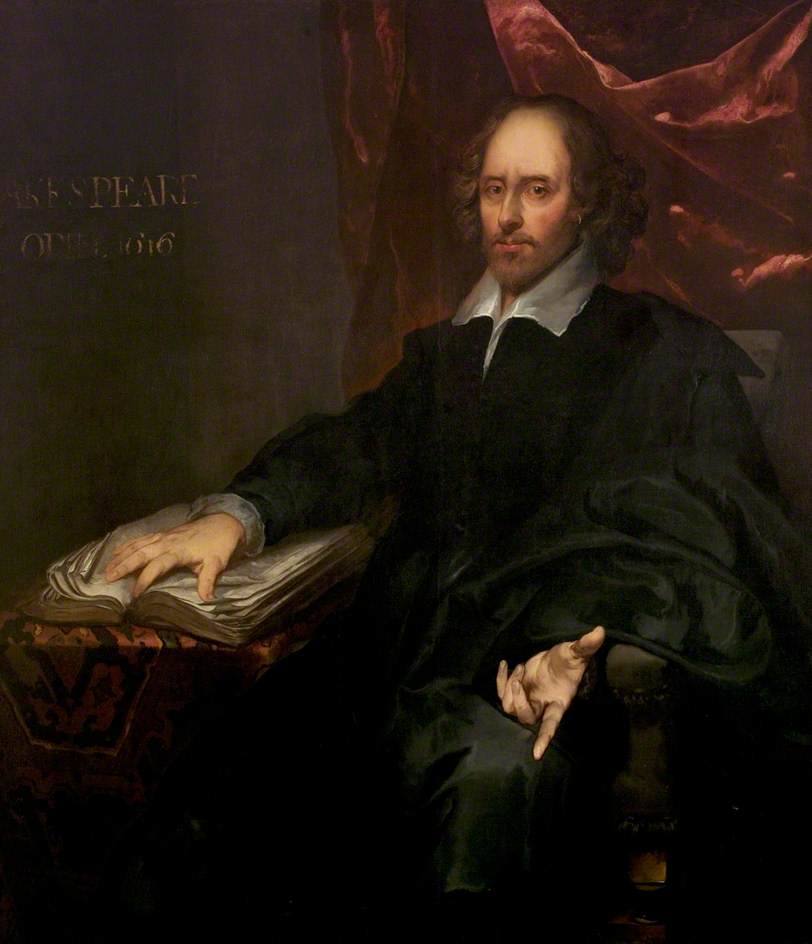 The inscription 'F. Zuccaro' was uncovered by cleaning by James Roth in 1967. He wrote that it 'did not seem superimposed' in a letter to Dr Levi Fox of 12.12.1967 (Shakespeare Birthplace Trust Archive). However, this attribution is certainly wrong as Zuccaro was in England for perhaps six months in 1574/5.


George Vertue, when he saw the painting at the Halifax sale in 1739/40 thought it had 'a head new painted onto the posture, perhaps by Sykes' (a painter working in the first and second decades of the eighteenth century). This would imply that the painting had been made of someone else in the 1660's and then altered to represent Shakespeare around 1700.

However, restoration in 1962 showed no evidence of such a history. Like the Soest Portrait, this painting is also associated with the anecdote which originates from Vertue and appears in The Gentleman's Magazine in 1759 which relates that Clarges (the first owner of the portrait) commissioned a young actor who looked like Shakespeare to sit for the portrait by Lely. The current attribution of Dutch artist Peter Borsseler was made by Oliver Millar, a leading authority on seventeenth century painting. He notes that it is very close to that artists portrait of Sir William Dugdale.


Busts of Pope, Dryden, Milton and Shakespeare were sent to Paris in 1751 by Lord Chesterfield.
Katherine Esdaile makes a very good case that the four busts for Mme Boccage’s garden sent to France by Chesterfield were Roubiliac marble busts. Mrs Thrale saw them in her drawing room in Paris in 1775. If this is truly the case, then marble busts of Shakespeare, Pope, Milton and Dryden are still awaiting discovery or identification - perhaps hidden in a French Collection.
There are currently no marble or plaster versions extant of the British Museum and Garrick Club terracottas.
Of course it is possible that the Madame Boccage busts were made of plaster and that given the delicate nature of the material they were accidently destroyed.
See - Louis Francois Roubiliac by Katherine Esdaile. pub. Oxford 1929.
Madame Boccage corresponded with Lord Chesterfield in 1750-52 and twelve of his letters to her were published by Dr Matthew Maty in Miscellaneous Works of the late Philip Dormer Stanhope, Earl of Chesterfield: consisting of letters to his friends, never before printed, and various other articles. To which are prefixed, memoirs of his life, tending to illustrate the civil, literary and political history of his time, 2 vols, London, 1777, vol. II, pp.242-81, letters LXXXV-XCVI.

14 June 1750 - replying to her asking for a bust of himself he tells her that he will be sending her busts of Pope and Milton.
20 May 1751 - He is sending four ambassadors, Shakespeare, Milton, Dryden and Pope.
7 November 1751 - the bust of himself should arrive at Dieppe on the first good wind
She wrote to her sister

This appears in  her account of a visit to dine with Madame de Boccage on October 5th 1775 :
" The Morning was spent in adjusting our Ornaments in order to dine with Madame de Bocage at 2 o'clock.  There was a showy Dinner with a Frame in the middle, and she gave us an English Pudding made after the  Receipt of  the Dutchess of  Queensbury.  We saw nothing particularly pleasing at this Visit but the beauty of Madame de Bocages niece, the Countess of Blanchetre, whose husband was so handsome too that being a Frenchman - I  wonder'd.  In the course of  conversation, however, he turned out an Italian, and  there was another Italian Noble - man who hailed Baretti and made himself agreable to us  all.  Nothing would serve him but attend us at night to the Colissee which, after leaving our Names with the Sardinian Ambassadress, we were willing  enough to permit.  In Madame de Bocage's Drawing room stood the Busts of Shakespear, Milton, Pope and Dryden, the lady sat on a Sopha with a fine Red Velvet Cushion fringed with gold under her Feet and just over her Head a  Cobweb of  uncommon  size & I am  sure  great Antiquity.  A Pot to spit in, either of  Pewter or Silver quite  as black &ill-coloured, was on her Table, & when  the  Servant carried Coffee about he put in Sugar with  his Fingers.  The House these people live in is a fine one but so contrived that we were to pass through  a sort of Hall where the Footmen were playing at Cards before we arrived at Madame's Chamber."

Horace Walpole wrote - 'There is come from France a Madame Bocage, who has translated Milton: my Lord Chesterfield prefers the copy to the original; but that is not uncommon for him to do, who is the patron of bad authors and bad actors. She has written a play too, which was damned, and worthy my lord's approbation'. Walpole not a fan of Madame Boccage!

Madame du Boccage published a poem in imitation of Milton, and another founded on Gesner's "Death of Abel." She also translated Pope's "Temple of Fame;" but her principal work was "La Columbiade."
It was at the house of this lady, at Paris, in 1775, that (Dr) Johnson was annoyed at her footman's taking the sugar in his fingers and throwing it into his coffee. "I was going," says the Doctor, "to put it aside, but hearing it was made on purpose for me, I e'en tasted Tom's fingers."
See my previous posting - http://bathartandarchitecture.blogspot.co.uk/2014_10_25_archive.html