Batty Langley and his Artificial Stone. 1731. 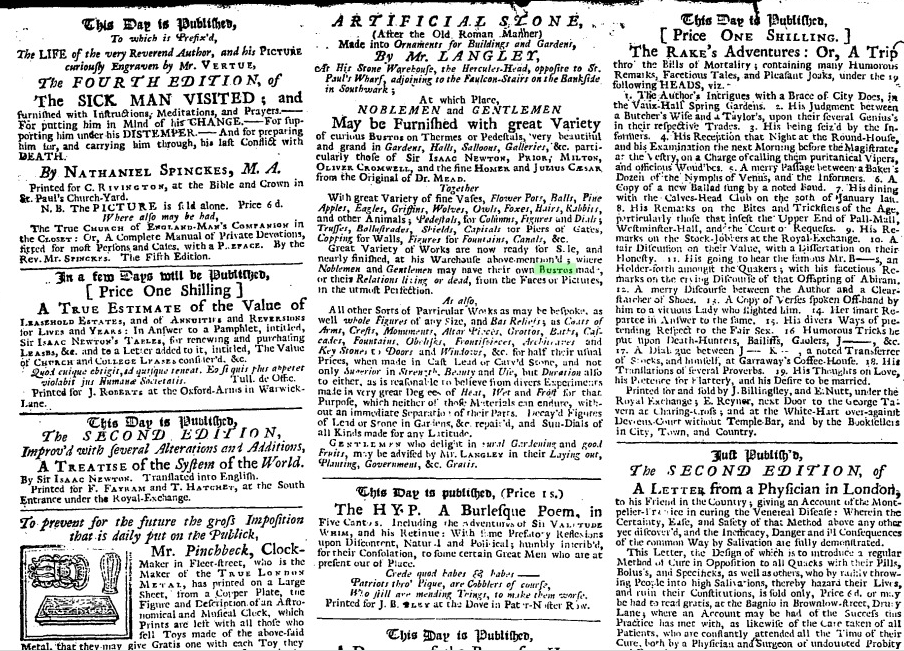 _________________________
Batty Langley (1696–1751).
A man of many parts, son of Daniel and Elizabeth Langley, he was born at Twickenham in Middlesex, and baptised at the parish church on 14 Sept. 1696 (parish reg. at Twickenham). His father was a gardener in the neighbourhood, and he seems first to have occupied himself as a landscape gardener (see Langley, Practical Geometry, p. 35). He resided first at Twickenham, removed to Parliament Stairs, Westminster, about 1736, and to Meard's Court, Dean Street, Soho, with his brother Thomas about 1740. His taste in architectural design has been much derided in the past particularly by George Vertue and repeated by Horace Walpole.

______________________________
This extract from From The Henry Moore Centre - http://217.204.55.158/henrymoore/sculptor/browserecord.php?-action=browse&-recid=1603
An architect and writer, he is best known for his numerous manuals and pattern books for artisans and craftsmen. He also manufactured statues, busts and architectural ornaments in an artificial stone and provided designs for the pediment as part of his architectural scheme for London’s new Mansion House.

Langley was evidently making artificial stone before 1730 for he staged a demonstration in London on 11 November 1729, when a comparison was made between the weight-bearing capacity of his product and natural Portland stone. It was reported in the Northampton Mercury that the Portland stone broke when the weight placed on it exceeded 168 lbs, whilst Langley's formidable artificial stone only collapsed when the weight was increased to 276 lbs. Vertue described Langley’s product as ‘a New invention of casting in stone or a hard composition - busts, statues, columns &c. or any frize or cornish workes for building. in immitation of free stone. & said to be more durable ... made near Lambeth and sold by one Batty Langley’, whom he described disparagingly as ‘a bold face undertaker’ (Vertue III, 51). The material may not indeed have been of Langley’s own invention since a similar substance had been patented by Richard Holt in 1722 and Holt maintained that Langley obtained the formula by foul means.

During the spring and summer of 1731 Langley advertised that ‘Sculptured or Carved Ornaments’, including statues, busts, ‘all manner of curious Vases, Urns, Pine Apples, Pedestals for Sundials, Balustrades, Key-Stones to the Arches of Windows and Doors, Bases and Capital for Piers of Gates, Columns and Pilasters’ were available from his warehouse at ‘the Hercules Head, near the Faulcon-Stairs on the Bank-side in Southwark’ (Daily Ad, 25 May-6 July 1731). Holt retaliated with a notice stating that ‘it appears from three several Affidavits, how and by what means [Langley] has come at any Insight into the Art of making Artificial Stone; and how very defective and short of Holt’s true Secret, his Discoveries (by tampering with Workmen) must needs be’ (Daily Ad, 28 May-1 June 1731). None of Langley’s artificial stone products have been identified and no information about the composition has been discovered but it is possible that a fired clay portrait medallion of Sir Isaac Newton, formerly in Langley’s possession, is one of his products (BM MLA SL 1984). If so, Langley’s material was not strictly an artificial stone and was not related to the formulae developed by Holt or the Coade Factory since it contained neither lead nor glass.

Langley was one of the architects who unsuccessfully entered the competition to design a new Mansion House for the City of London in 1735-37. He was apparently the only architect to include a design for the pediment, depicting Britannia with the Arms of the City, attended by numerous allegorical figures. The architect George Dance the Elder won the competition and the tympanum sculpture was executed by Sir Robert Taylor.

Rupert Gunnis notes payments for work supplied to Lord Folkestone at Longford Castle by ‘Langley’, some of them paid for seven years after Batty Langley’s death, and he suggests that either the business was carried on after his demise or that there were two Langleys (see below for details of his brother Thomas). The items included a sundial, for which Folkestone paid £1 13s in 1748, carved capitals at £10 15s 6d (1757), ‘stucco ornaments to ye Venetian seat’ at 7 guineas (1758), four shields on gate piers at 12 guineas (1758) and a carved head in the passage at £4 12s 6d (1758).
EH

1: 'An Accurate Account of Newgate ... together with a faithful account of the Impositions of Bailiffs ... by B. L. of Twickenham,' 1724.

3. 'The Builder's Chest Book, or a Compleat Key to the Five Orders of Columns in Architecture,' London, 1727 (in dialogue form).

6. 'A Sure Guide to Builders, or the Principles and Practice of Architecture Geometrically Demonstrated,' London, 1729.

7. 'Pomona, or the Fruit Garden Illustrated,' London, 1729. Many of the plates were drawn by himself.

11. 'A Reply to Mr. John James's Review of the several Pamphlets and Schemes ... for the Building of a Bridge at Westminster,' London, 1737.

15. 'Ancient Architecture, restored and improved, by a great variety of Grand and Useful Designs' (1st part), London, plates dated 1741. The whole work, with a dissertation 'On the Ancient Buildings in this Kingdom,' and entitled 'Gothic Architecture,' 1747. Some examples of these 'Gothic orders of my own invention' were actually erected by Langley in London. The original drawings for the work are preserved in Sir John Soane's Museum.

21. 'The Workman's Golden Rule for Drawing and Working the Five Orders in Architecture,' London 1757. 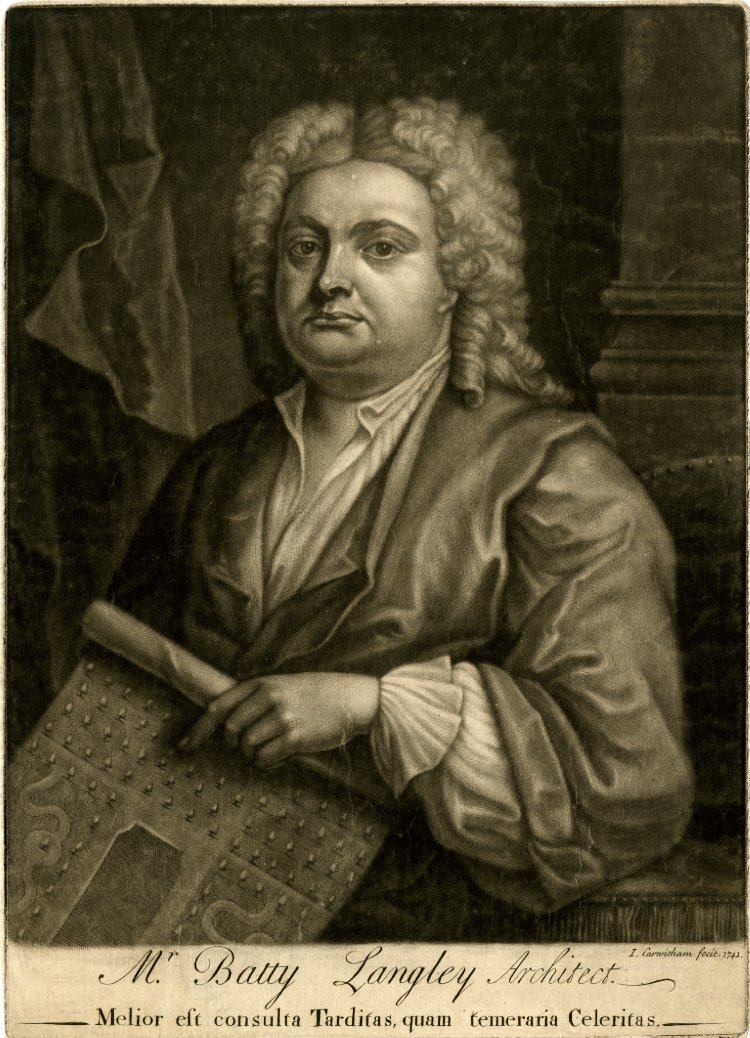 Thomas Langley (fl. 1745), engraver of antiquities, &c., brother of the above, was born at Twickenham in March 1702, and for some years of his life resided at Salisbury. He engraved 'A Plan of St. Thomas's Church in the City of New Sarum,' north-west and south-east views of the church drawn by John Lyons, 1745, and 'The Sacrifice of Matthews to Jupiter,' drawn by Lyons, 1752. He both drew and engraved many of the plates for his brother's books, and taught architectural drawing to his pupils.

For a serious in depth study of Batty Langley see :