Nollekens by Rowlandson, Portraits of Nollekens

As a little light relief and for no particular reason here are some satirical images of Nollekens by Thomas Rowlandson along with portraits of Nollekens and some further engravings by Rowlandson. 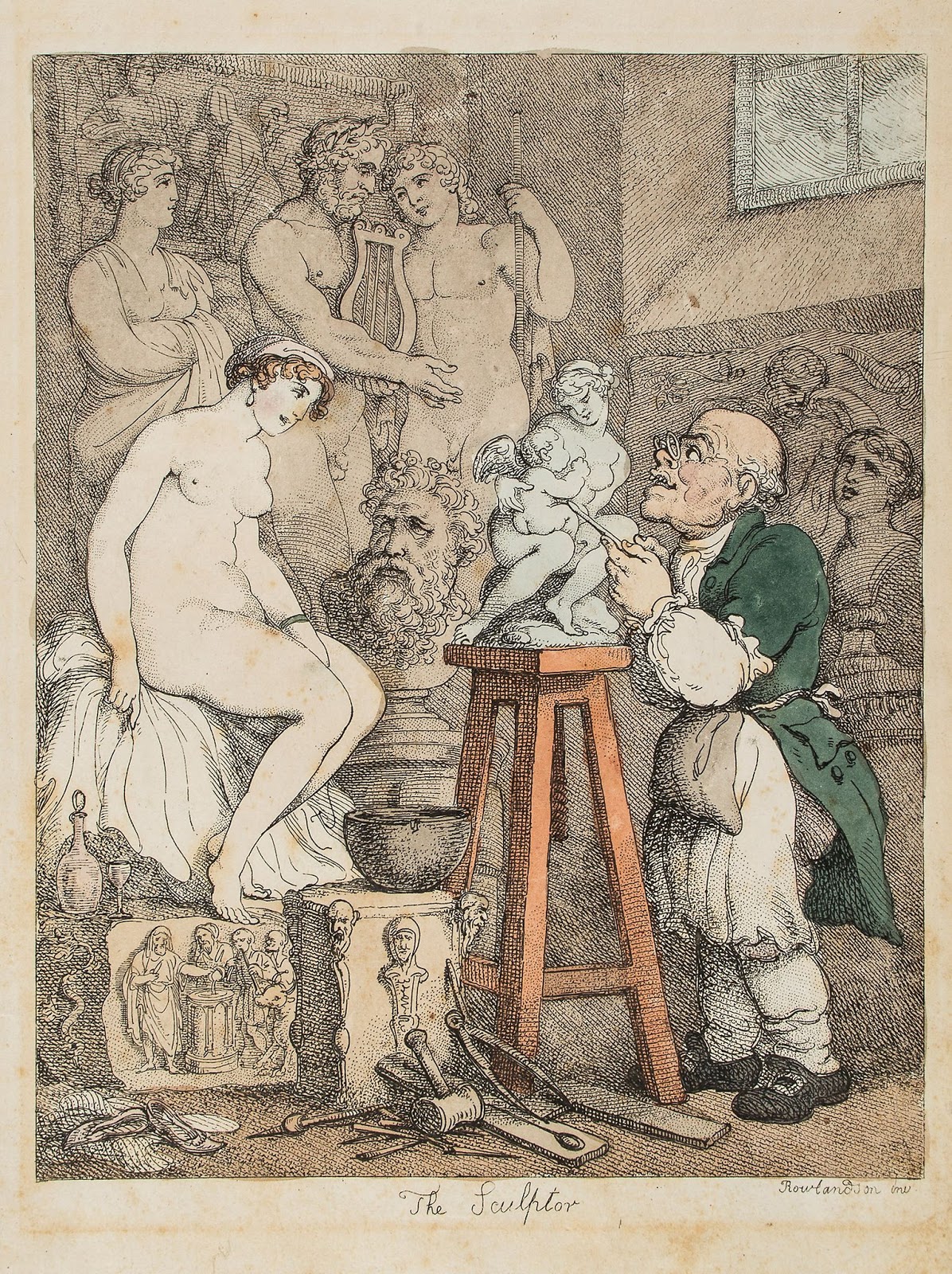 "His figure was short, his head big. . . . His neck was short, his shoulders narrow, his body too large particularly in the front lower part . .. . he was bow-legged and hook-nosed-indeed, his leg was somewhat like his nose which resembled the rudder of an Antwerp packetboat-his lips were thin, but between his brows there was great evidence of study." " 'Oh, dear,' observed Miss Coleman, 'andyou don't know me:-you have given me many a basin of broth in the depth of winter when I used to standfor Venus.' Mrs. Nollekens, not knowing what to think of Joseph, shook her head at him as she slammed the window, at the same time exclaiming, 'Oh! fie! Mr. Nollekens. fie! fie! . . . to know such wretches after you have done with them in your studio!' " "I have seen him finish up the feet of his female figures from those of the Venlus de Medicis; the English women, his constant models, having very bad toes in consequence of their abominable habit of wearing small and pointed shoes."
Smith, Nollekens and His Times, I, London, I828, pp. 83, 227, 328
Nollekens And His Times: Comprehending A Life Of That Celebrated Sculptor; And Memoirs Of Several Contemporary Artists, From The Time Of Roubiliac, Hogarth, And Reynolds, To That of Fuseli, Flaxman, And Blake. By John Thomas Smith, Keeper Of The Prints And Drawings In The British Museum. Second Edition. In Two Volumes. Vol. I. (II.) - London: 1829.
For 1895 edition see - https://archive.org/stream/nollekenshistime00smitrich#page/n1/mode/2up 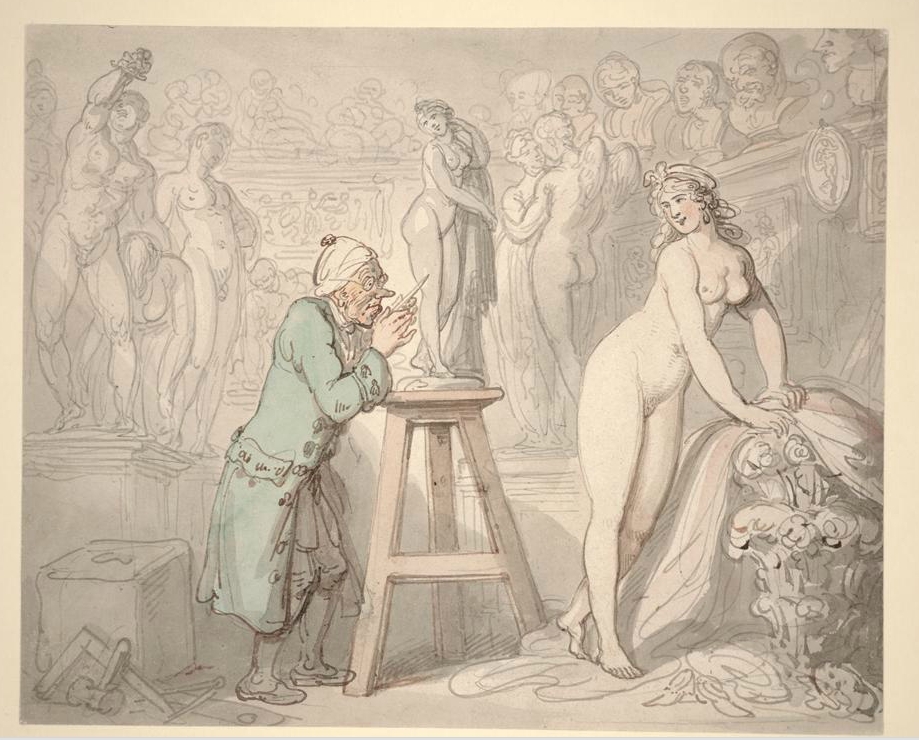 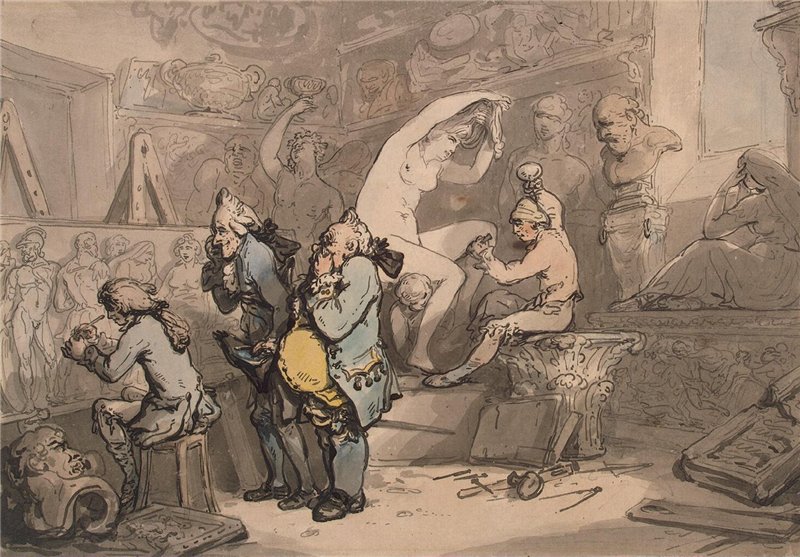 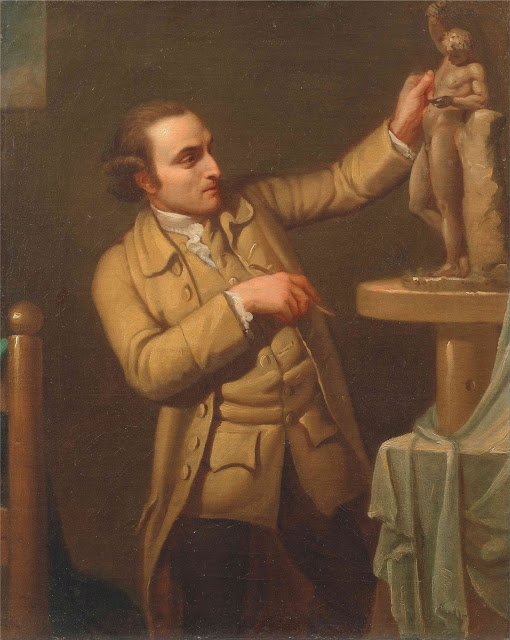 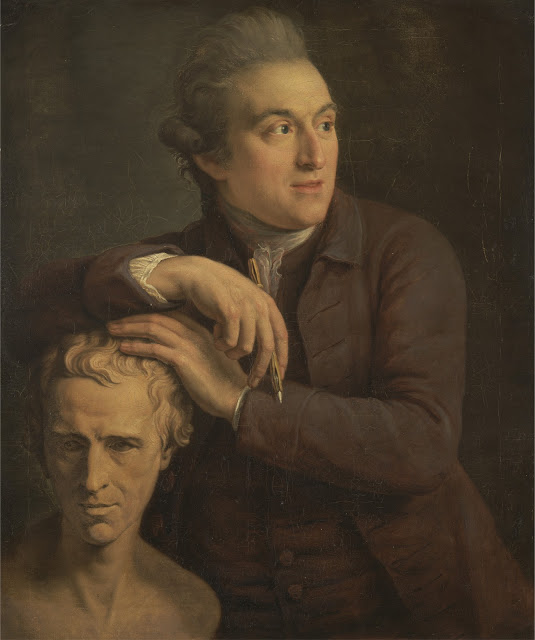 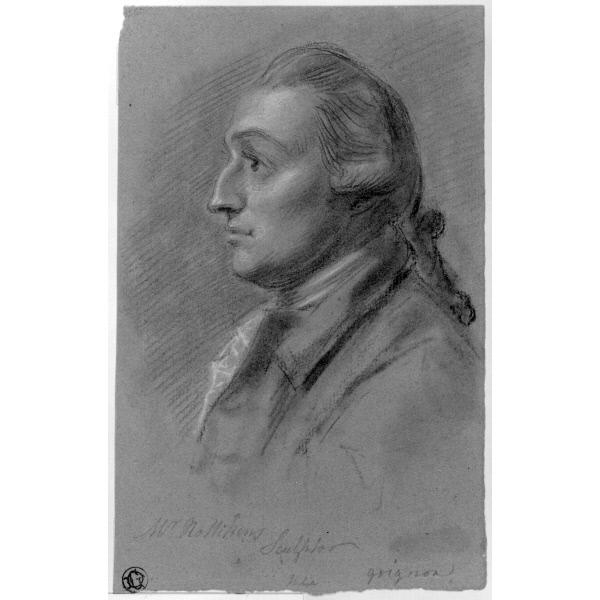 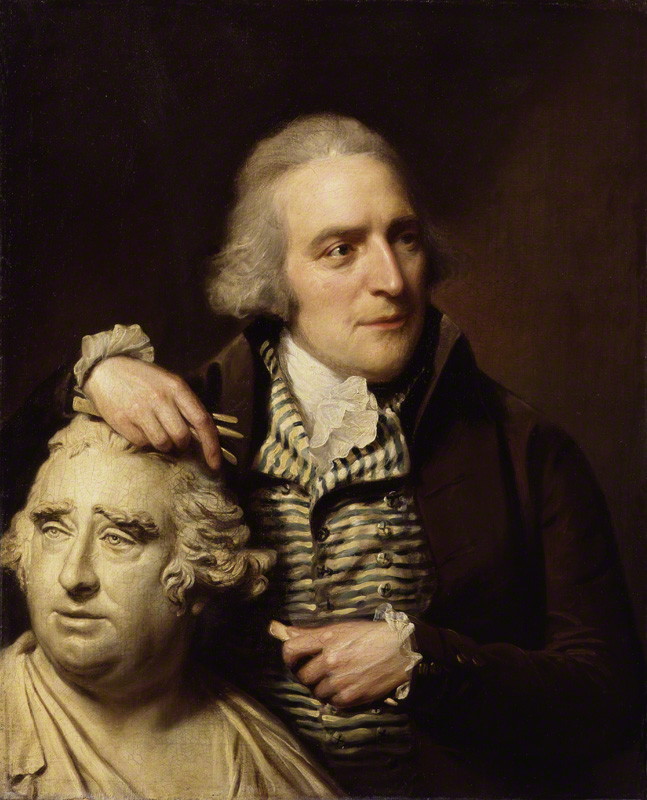 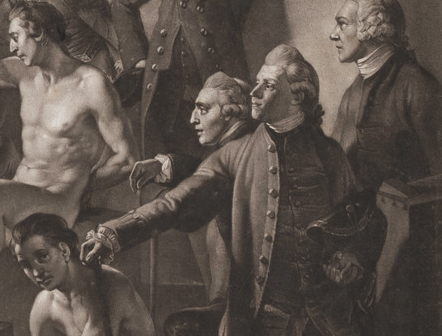 In the centre Joseph Nollekens, to his right Richard Cosway and far right William Hoare
This image has been cropped from the Mezzotint below. 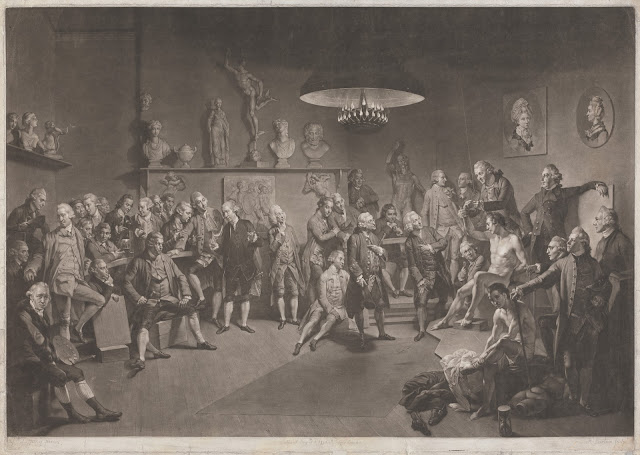 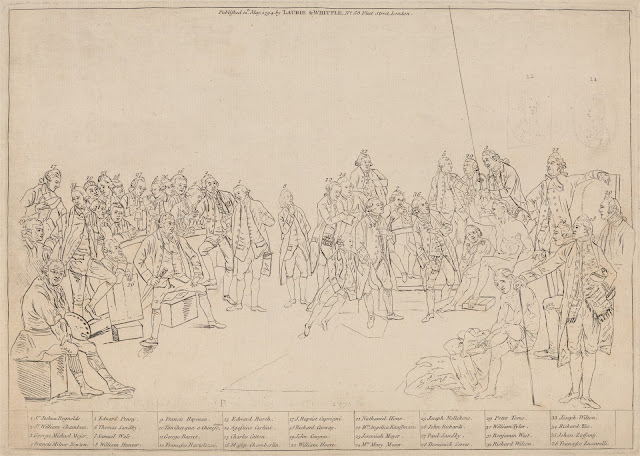 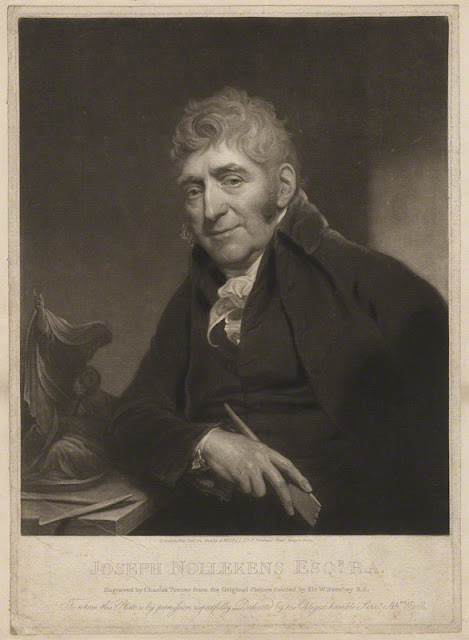 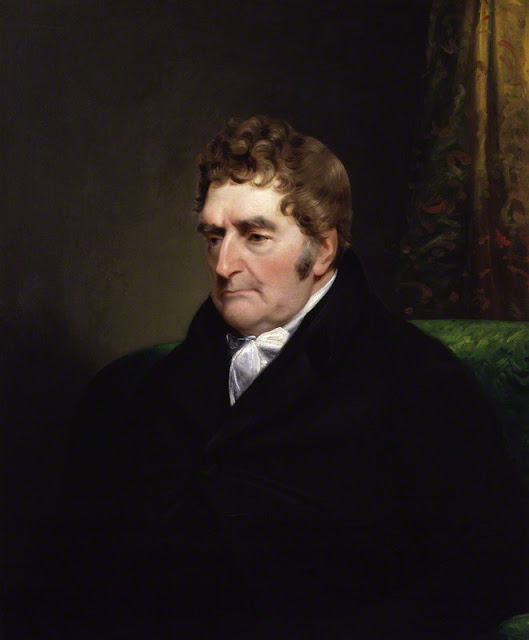 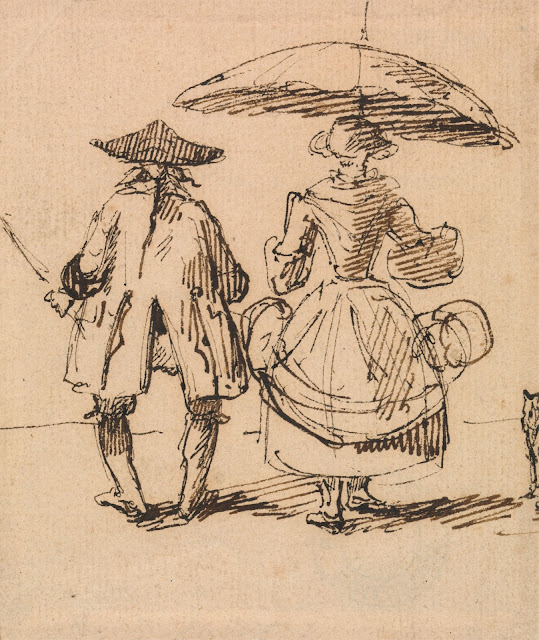 Joseph Nollekens R.A. and Mrs. Nollekens:
The pair of compasses and the pair of callipers side by side
John Thomas Smith, 1766–1833.
92 x 79 mm.
Yale Centre for British Art. Paul Mellon Collection. 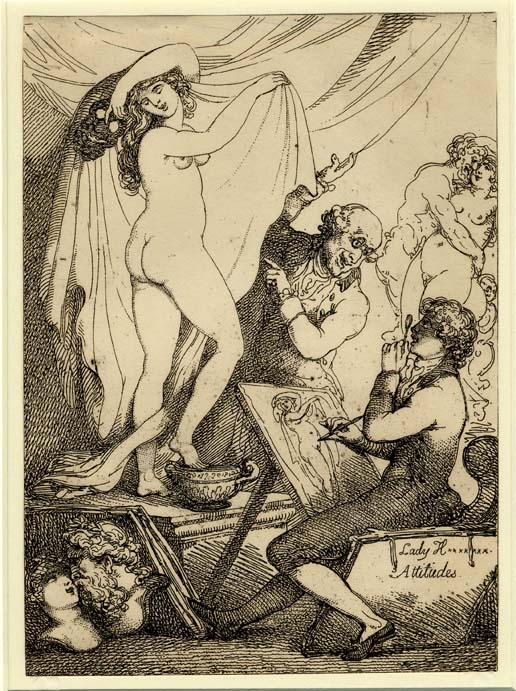 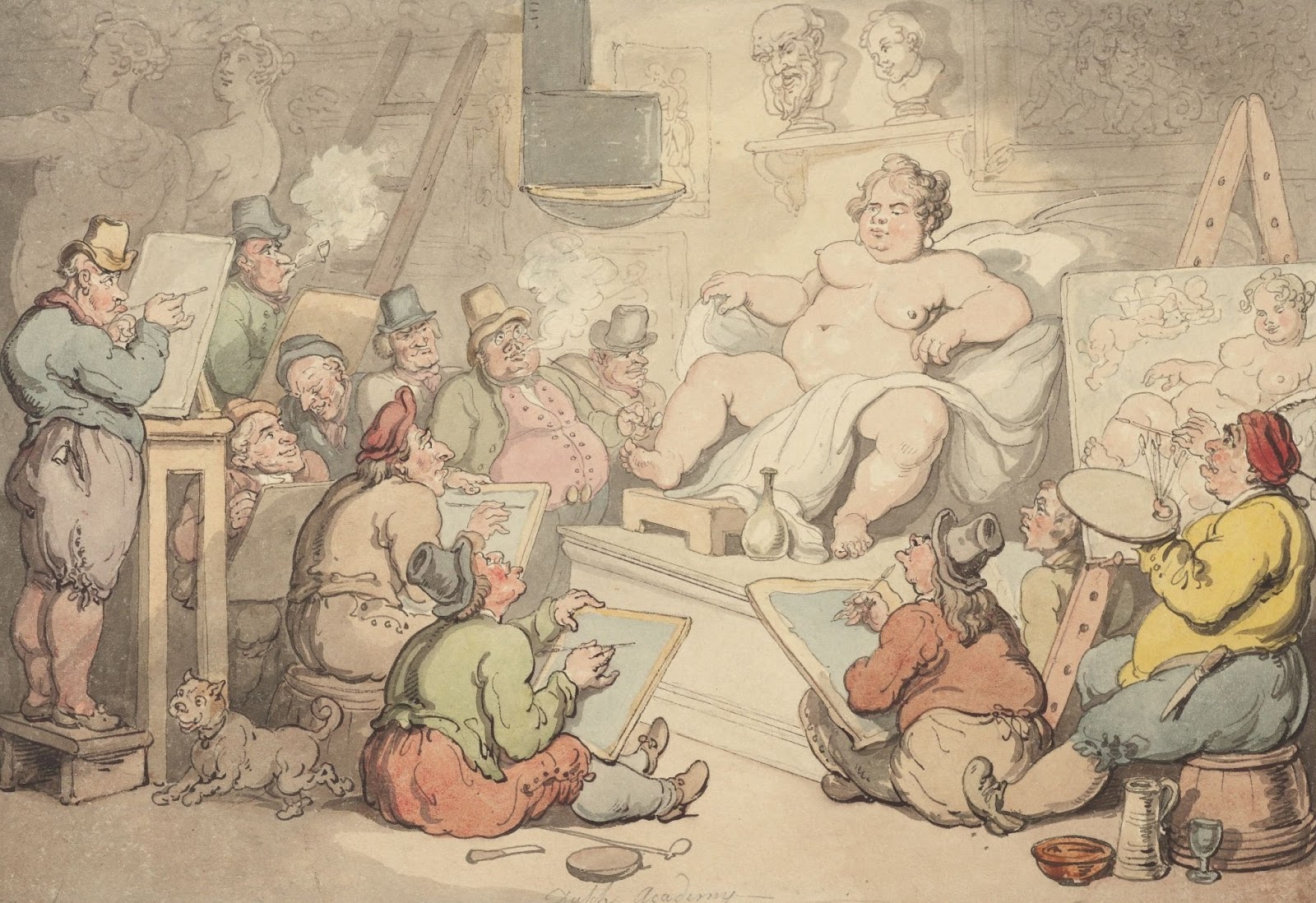 A Dutch Academy
Watercolour Drawing by Rowlandson
Image from Houghton Library at Harvard University
For an interesting, short essay on the titillating aspects of viewing 18th century painting and sculpture see
-http://unmakingthings.rca.ac.uk/2014/flesh-marble-materialising-the-body-in-18th-century-satirical-prints/
For more on this hitherto neglected aspect of viewing sculpture, particularly the classical nude see
Owning the Past - Why the English Collected Antique Sculpture, 1640 - 1840.
Ruth Gilding. published by Yale. 2014.
By far and away the best book on classical sculpture and the English collector published recently and should be in the library of anyone interested in the subject. A refreshingly enlightened work with excellent illustrations and photographs. Highly recommended. 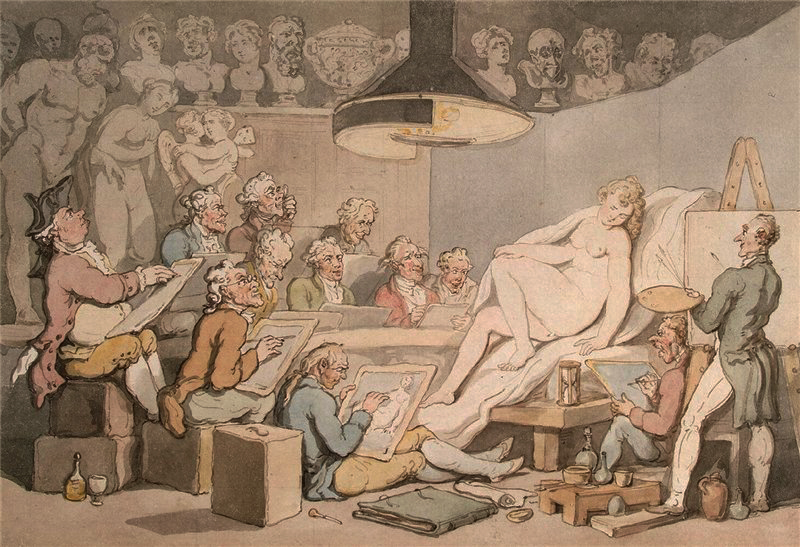 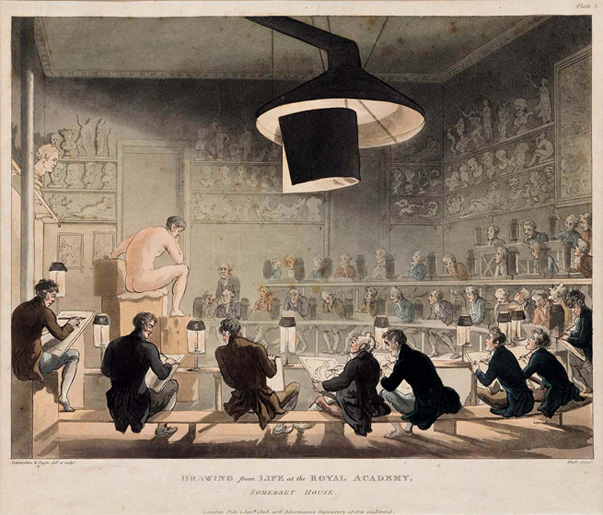 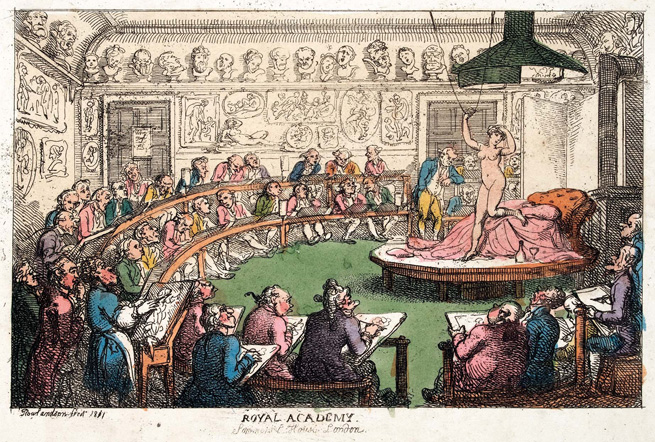