A terracotta bust of Elizabeth I from Queen Caroline's Library.

One of the three survivors of the eleven terracotta busts by Michael Rysbrack,
Seven of which were accidently destroyed when a Shelf Collapsed
at Windsor Castle in 1906.
The Original Photographs were taken by John Wesley Livingstone (d. 1899) in 1874 for a royal inventory. 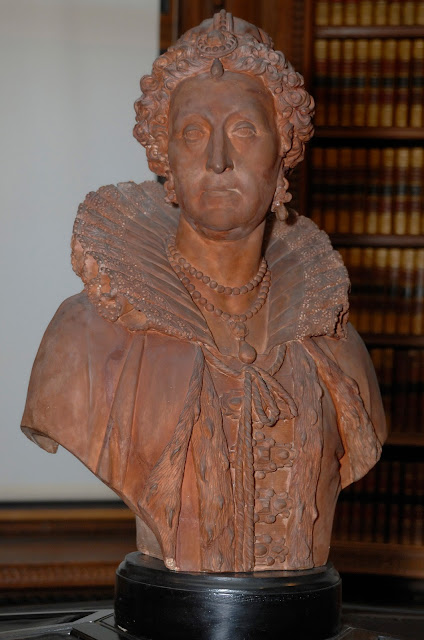 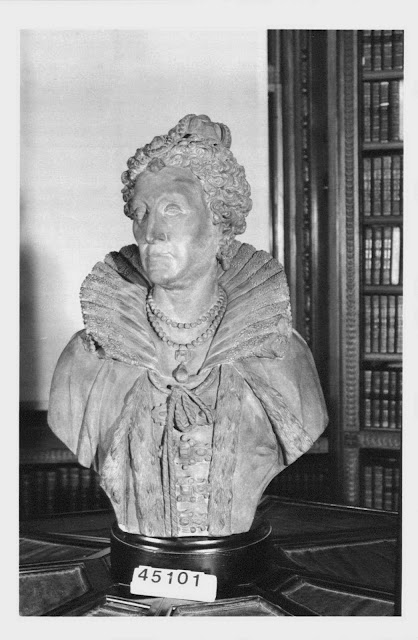 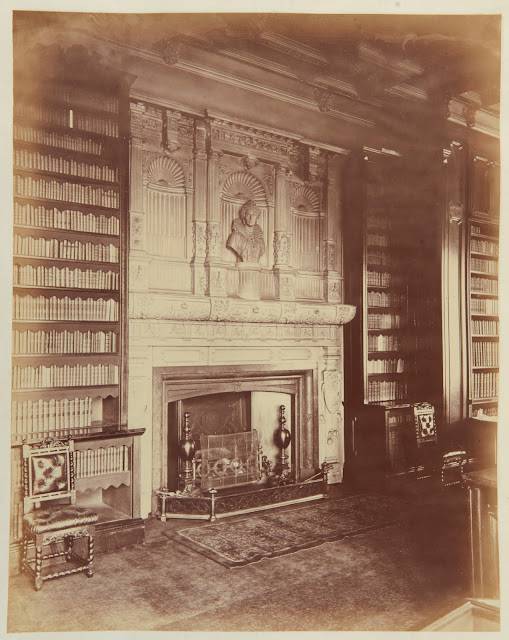 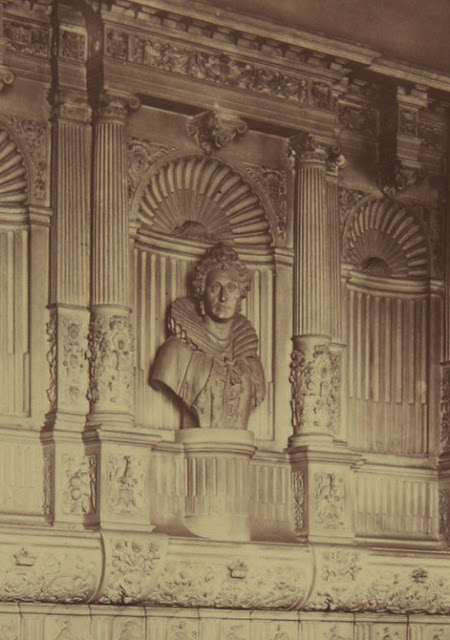 Photograph of the large Elizabethan fireplace in Room Three of the Royal Library, Windsor Castle, which has a bust of Queen Elizabeth inset above.
Photograph commissioned by the Royal Collection for inventory purposes circa 1874.
Photograph attributed to John Wesley Livingstone.
Royal Collection Trust / © HM Queen Elizabeth II, 2015.
The bust had been painted white and has been stripped back to bare tewrracotta. Rysbrack invariably painted his busts to disguise firing cracks
The Iconography of Elizabeth I.
The iconography of Elizabeth I is particularly rich. I am not going to make any attempt to do a serious survey of the portraits of Elizabeth I, there are about 280 images in the Royal Collection, a couple of hundred on the British Museum website and many more on the V and A website - I will try to confine myself to a few relevant illustrations.
see - for a reasonable overview of the painted portraits
http://www.luminarium.org/renlit/elizface.htm
http://www.luminarium.org/renlit/elizface2.htm
http://www.luminarium.org/renlit/elizface3.htm
The Rysbrack bust is based on the tomb of Elizabeth I by Maximillian Colt at Westminster Abbey, which is itself probably based on a death mask. 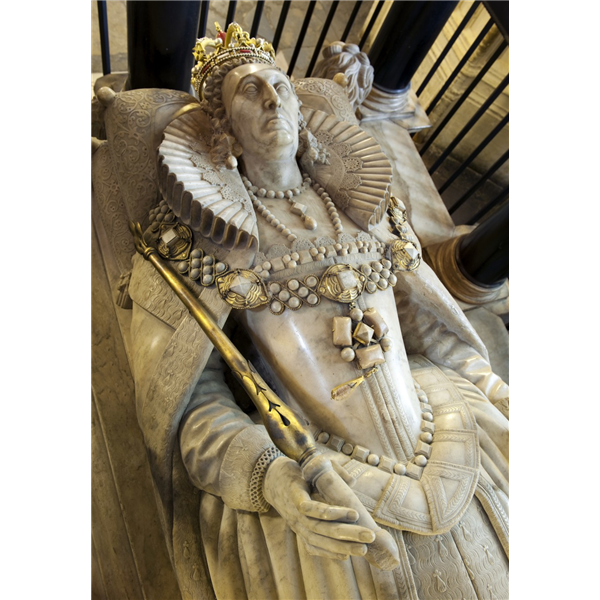 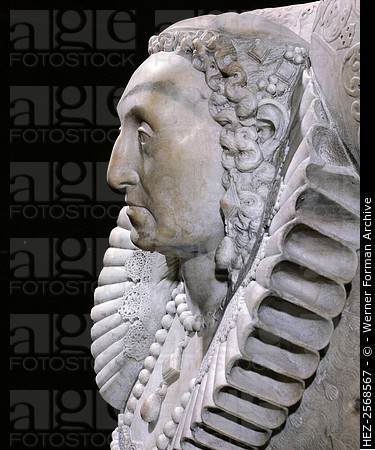 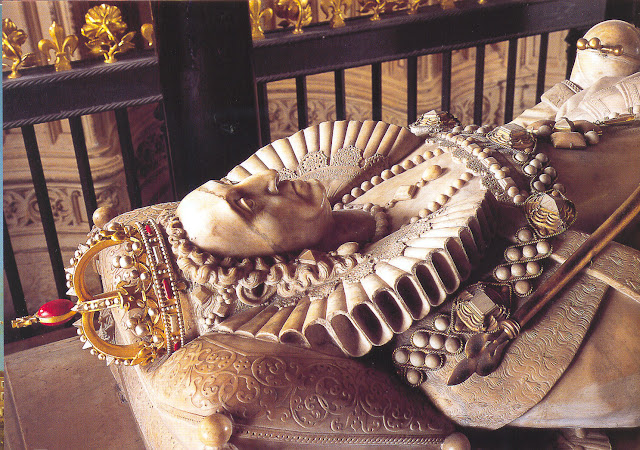 Her death, at Richmond Palace, on 24 March 1603 was an occasion of universal mourning. For some days the body lay at Richmond and then was brought by barge to Whitehall Palace to lie in state.  Thousands of people turned out to see her funeral procession to the Abbey on 28 April 1603 when there was "such a general sighing, groaning and weeping as the like hath not been seen or known in the memory of man". The coffin, covered in purple velvet, was borne on a chariot drawn by four grey horses with black trappers. The coloured wooden funeral effigy lay on top of the coffin.  Her body was encased in lead within the wooden coffin and first buried in the vault of her grandfather King Henry VII (underneath his monument) in the Abbey. The original funeral effigy, by John Colt (brother of Maximilian), that had been carried on her hearse was remade in 1760 with a wax head and can be seen in the Abbey Museum. The original, and unique, corset from the 1603 effigy still survives however and is now displayed alongside the wax figure. In 1606 her coffin was moved to the north aisle of Henry VII's chapel and laid on top of the coffin of her half-sister Mary I under the monument which was erected for Elizabeth by her successor King James I. The large white marble monument (less tall than the monument James later erected for his mother Mary, Queen of Scots in the opposite aisle of the chapel) was made by sculptor Maximilian Colt and painted by Jan de Critz.
For several excellent photographs of a Chimneypiece at Charlton House, and the tomb of Sir Robert Cecil at the Church of St Etheldreda at Hatfield by Maximillian Colt -
see -  http://www.flickriver.com/photos/tags/maximiliancolt/interesting/
___________________________ 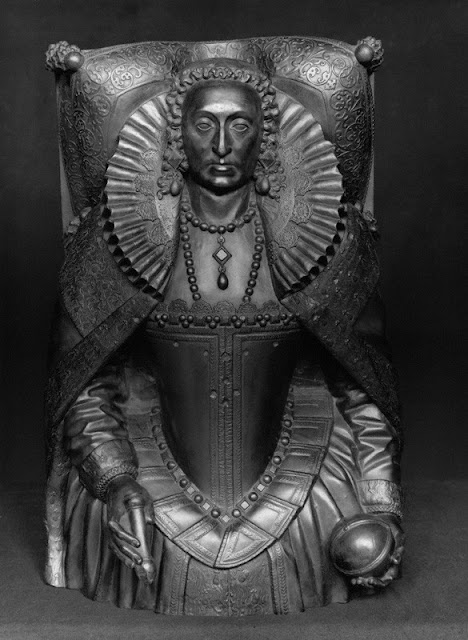 An Electrotype of the effigy on the monument to Elizabeth I by Maximillian Colt in Westminster Abbey. Made by Elkington from a cast by Domenico Brucciani.
965 mm. long.
© National Portrait Gallery, London.
This electrotype is a copy from the upper part of the white marble tomb effigy in Westminster Abbey. It is one of a series of electrotype reproductions of tomb effigies made for the National Portrait Gallery by Elkington & Co in the 1870s. An electrotype sculpture of this type is made by electro-deposition of copper onto a mould or cast of an object. The electrotype could then be patinated like bronze. Elizabeth is portrayed as queen, with the crown, orb and sceptre. Sculpted after her death, the stark realism of the features of the sculpted portrait suggests that the effigy was probably based on a death mask. The royal regalia have been damaged in the original monument and this is replicated in the electrotype copy displayed here.
© National Portrait Gallery, London. 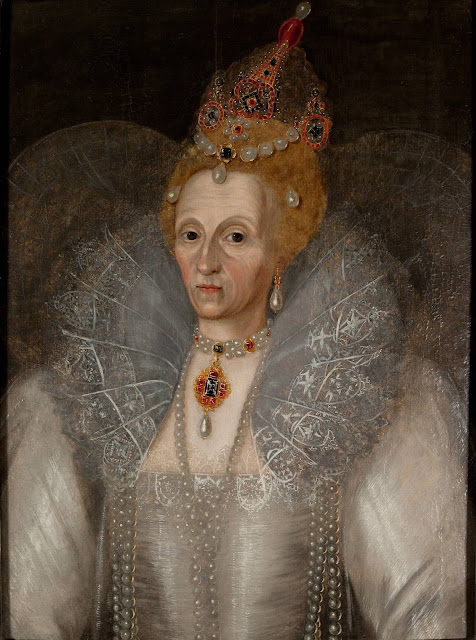 Elizabeth I. c. 1590.
Remarkable portrait described as 'studio of 'Marcus Gheeraerts the Younger.
A recently identified portrait.
Notes - According to Anna Riehl, author of The Face of Queenship: Early Modern Representations of Queen Elizabeth I the Elizabethan Gardens portrait is a "rare exception in not covering up the queen's flaws”.
A 1563 draft of Royal Proclamation attempted to regulate the production and circulation of the Queen's portraits, and a 1596 order to the Privy Council commanded public officers "to aid the Queen's Sergeant Painter in seeking out unseemly portraits which were to her 'great offence' and therefore to be defaced and no more portraits to be produced except as approved by [the] Sergeant Painter."
“the decrees don't specify ‘ageing’ portraits or even comment on the queen's own looks in any way”, many paintings of the time presented an eternally youthful Elizabeth. Herron also notes that visitors at her court commented upon the queen’s advanced age by the 1580s and 90s - as well as her dignified and benevolent disposition. He further observed that visitors offered less flattering descriptions.
The portrait was purchased in the Fifties by the Elizabethan Gardens in Manteo, North Carolina from a New York art gallery for $3,000 to hang in the gatehouse of the Gardens. It was not until 2007 that the Gardens staff took steps to investigate its origins.
Photo: Courtesy of Elizabethan Gardens of North Carolina.
Another version at Burghley.
____________________________________ 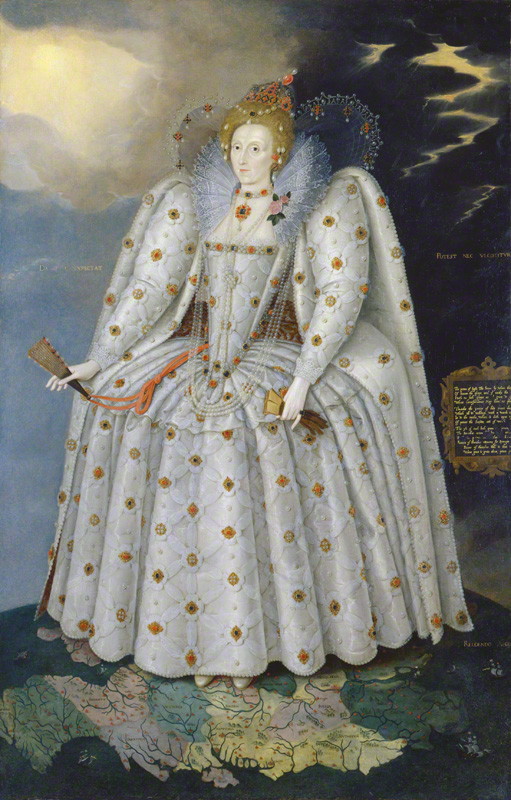 © National Portrait Gallery, London.
Notes - Known as the 'Ditchley Portrait', this painting was produced for Sir Henry Lee who had been the Queen's Champion from 1559-90. It probably commemorates an elaborate symbolic entertainment which Lee organised for the Queen in September 1592, and which may have been held in the grounds of Lee's house at Ditchley, near Oxford, or at the nearby palace at Woodstock.. After his retirement in 1590 Lee lived at Ditchley with his mistress Anne Vavasour. The entertainment marked the Queen's forgiveness of Lee for becoming a 'stranger lady's thrall'. The portrait shows Elizabeth standing on the globe of the world, with her feet on Oxfordshire. The stormy sky, the clouds parting to reveal sunshine, and the inscriptions on the painting, make it plain that the portrait's symbolic theme is forgiveness. The three fragmentary Latin inscriptions can be interpreted as: (left) 'She gives and does not expect'; (right) 'She can but does not take revenge', and (bottom right) 'In giving back she increases (?)'. The sonnet (right), perhaps composed by Lee, though fragmentary, can mostly be reconstructed. Its subject is the sun, symbol of the monarch.
© National Portrait Gallery, London. 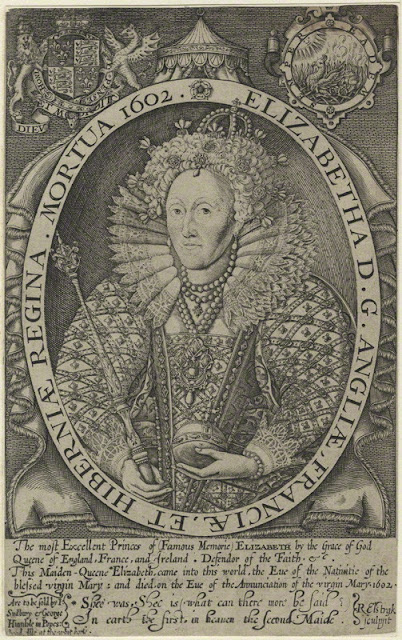 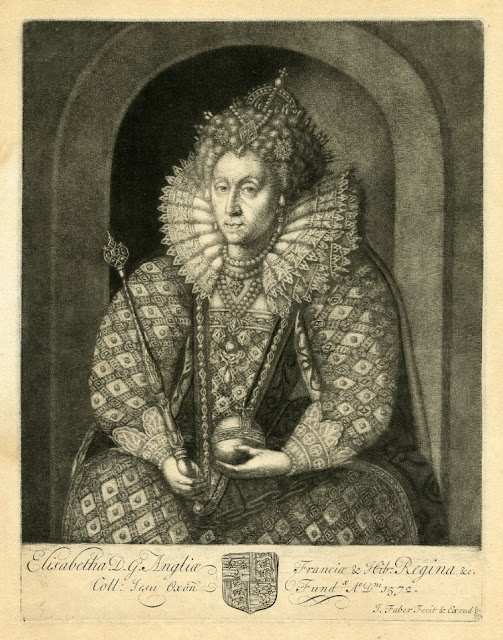 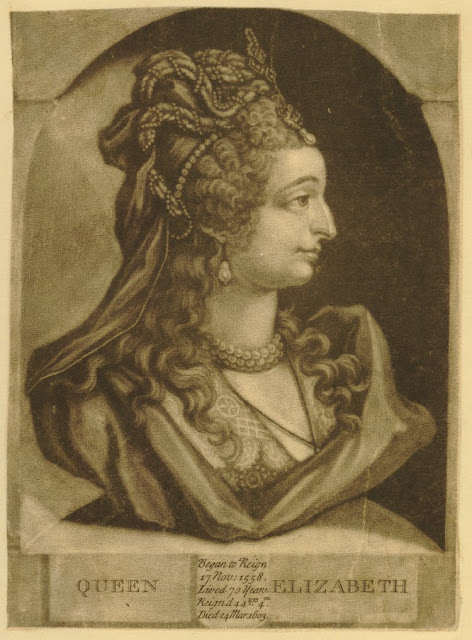 Queen Elizabeth I
Mezzotint by John Faber.
This is more likely to be a representation of Anne of Denmark.
British Museum 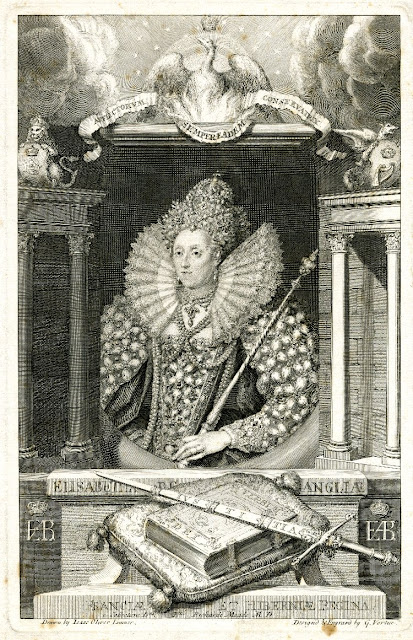 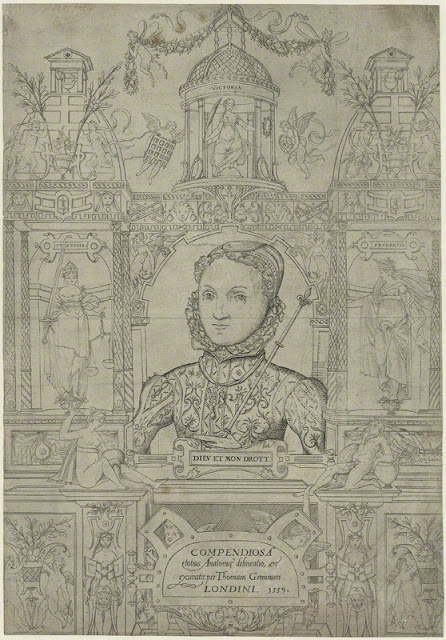 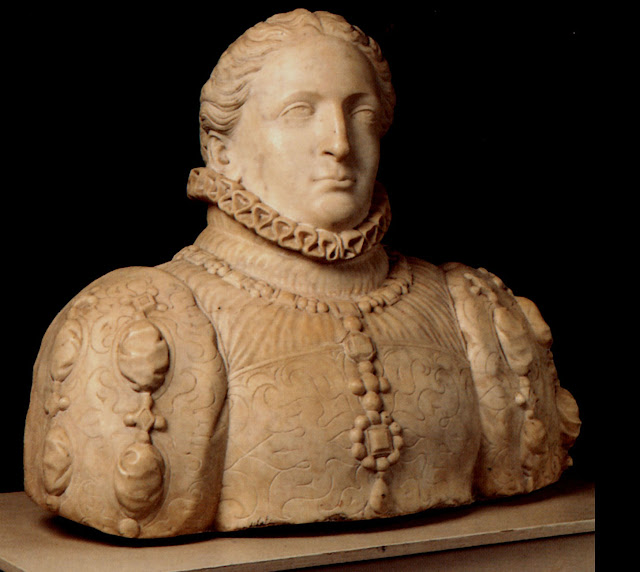 Elizabeth I
One of the Lumley Marble Busts.
Currently at Leeds Castle. 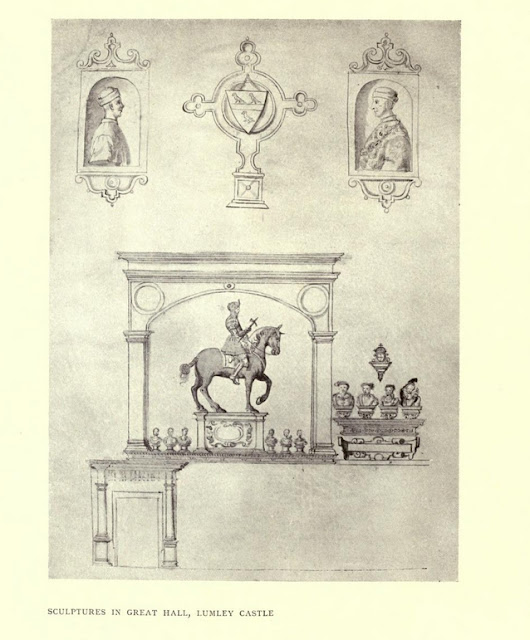 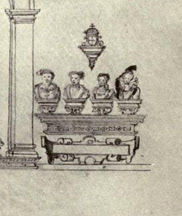 Illustration from the Lumley Castle Inventory. 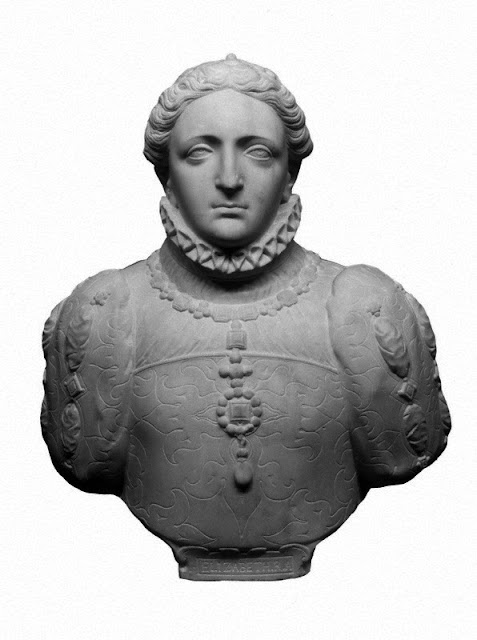 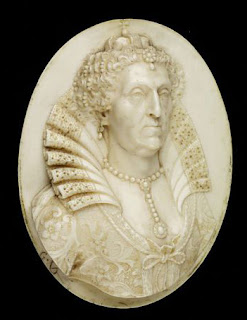 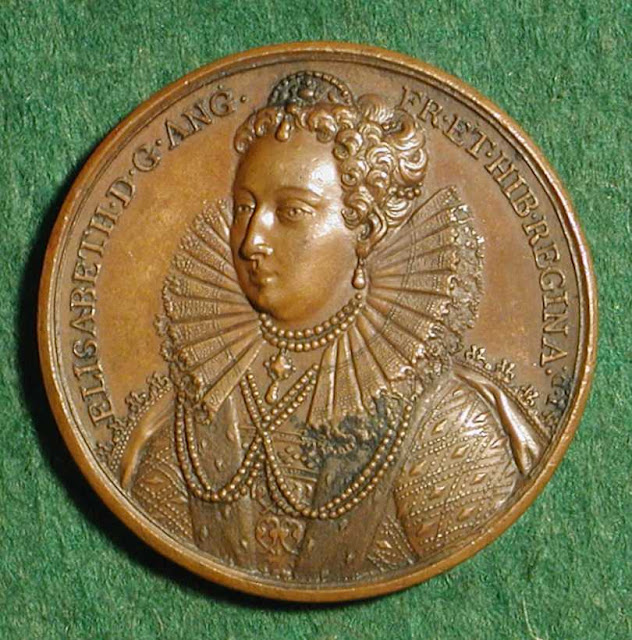 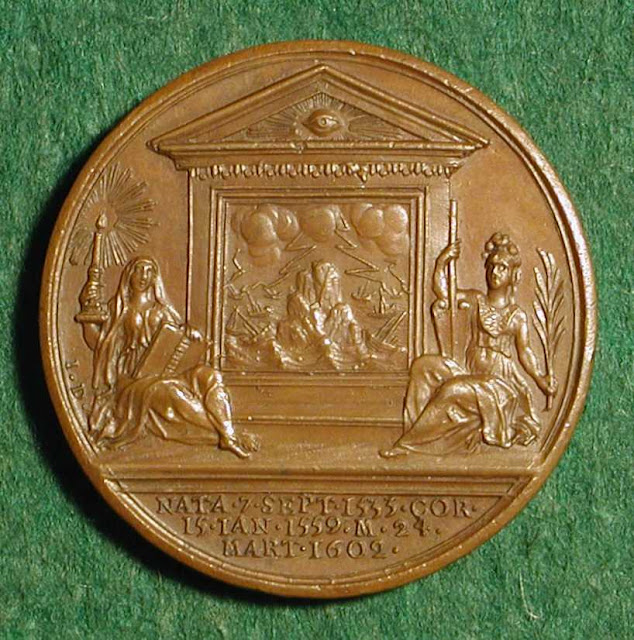 Jean Dassier
Bronze Medallion 1731.
41mm diam.
Rev: Monument with a triangular pediment into which the Eye of God (Providence) has been inserted. The bas relief depicts the destruction of the Armada, with lightning bolts destroying the Spanish vessels. This is flanked on the left by Religion holding a bible and a lighted candle, symbolizing the Reformation, and on the right by Minerva holding a rudder and palm branch, symbolizing the learning, wisdom and prudence of Elizabeth. (Eisler).
Image and description courtesy Ben Weiss - http://www.historicalartmedals.com/default.htm
______________________________________________
A Coade Stone Bust of a Young Elizabeth I, Circa 1780. 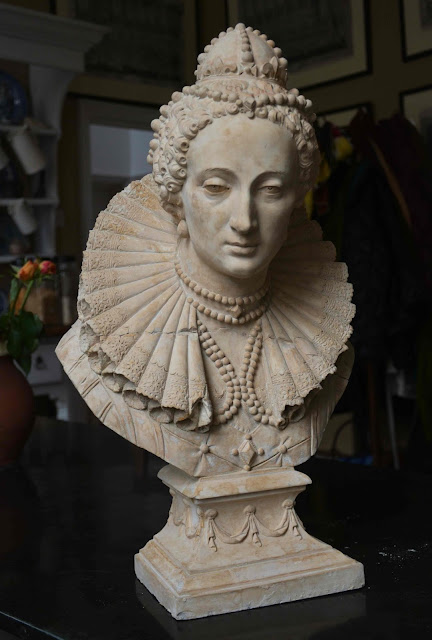 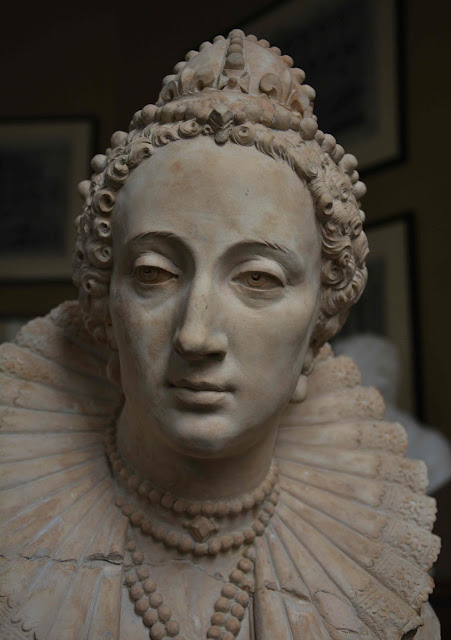 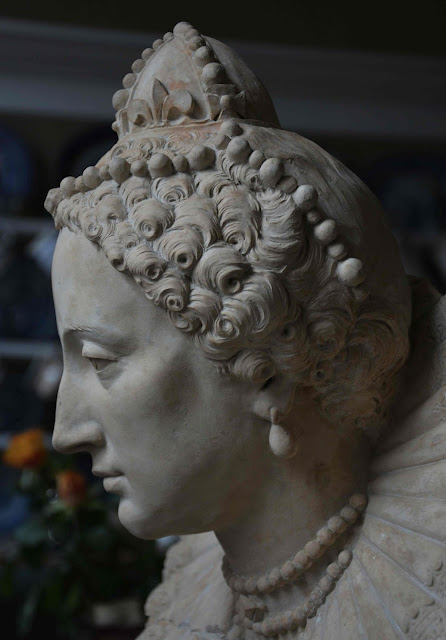 Coade Stone bust of Elizabeth I.
attributed to John Bacon.
Circa 1780
Private Collection. 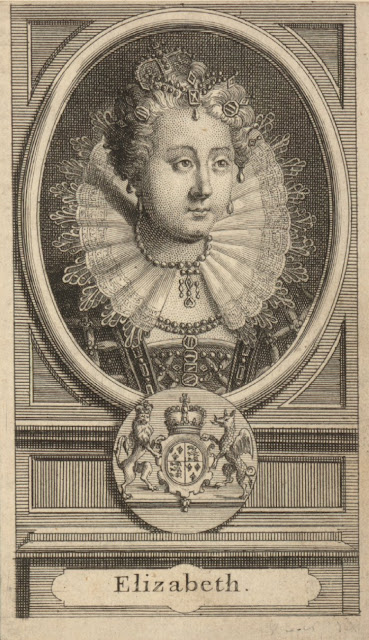