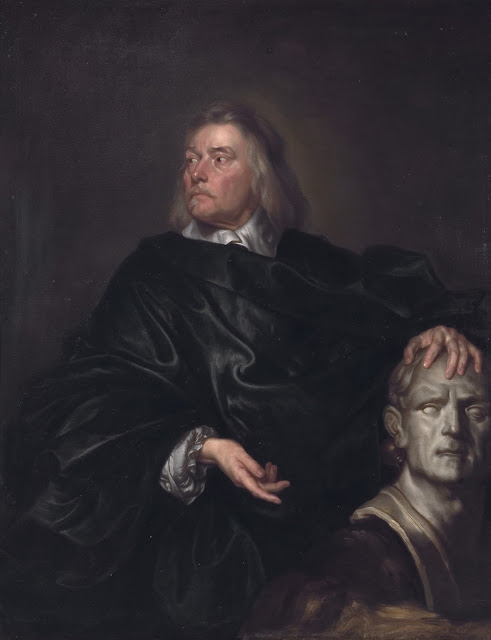 For a brief biography of Edward Pearce see - 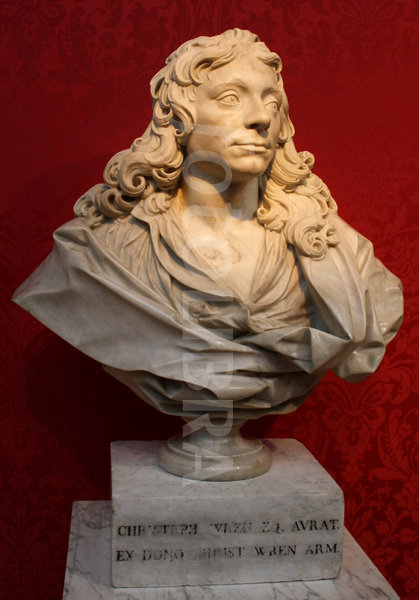 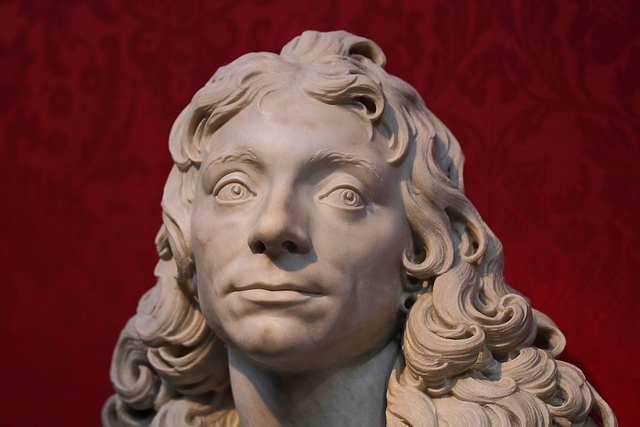 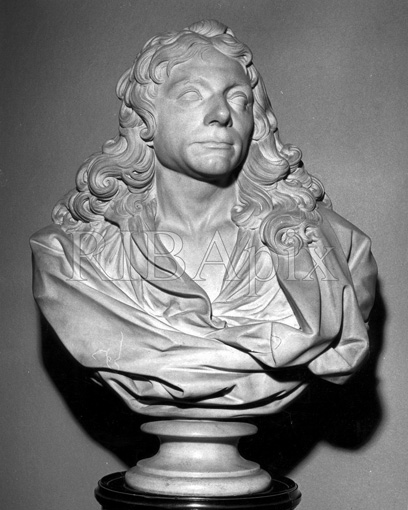 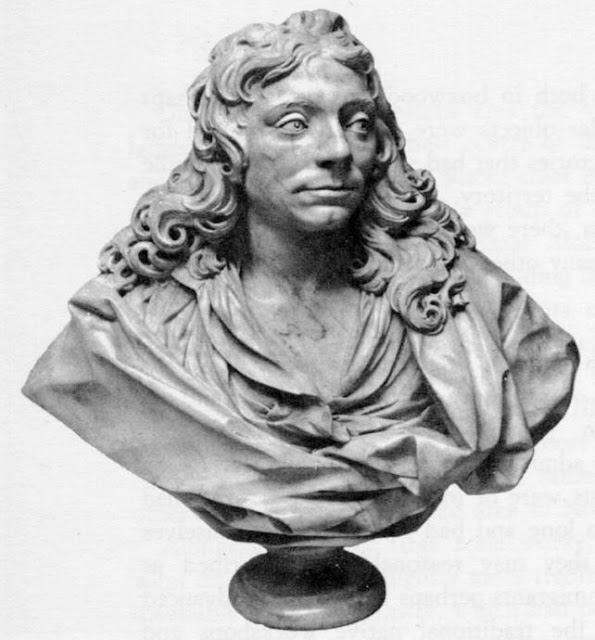 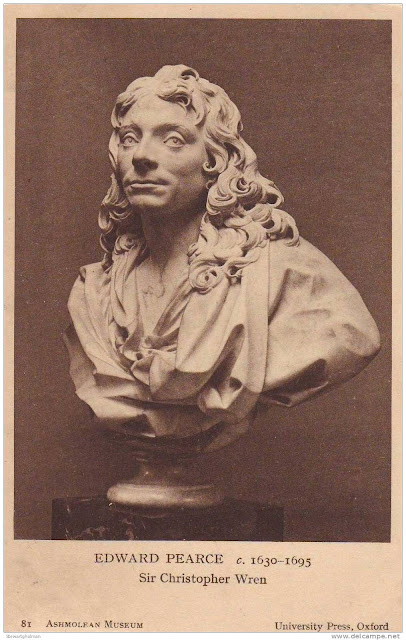 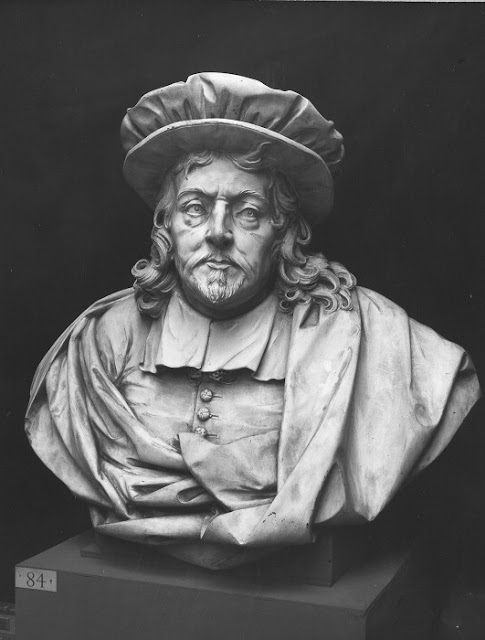 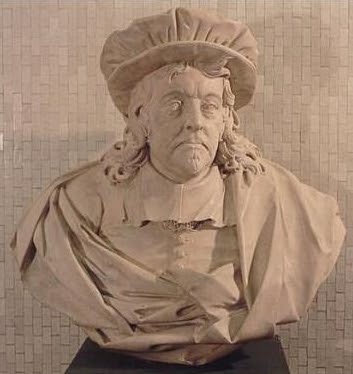 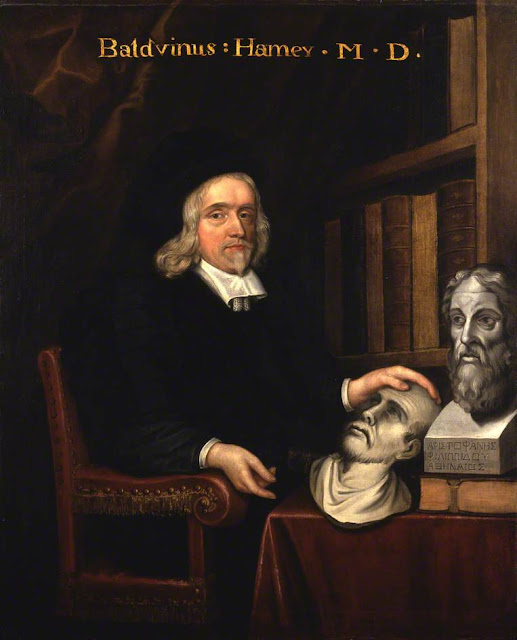 Baldwin Hamey was a member of the Church of England and a devoted royalist, and supported Charles II financially during his exile. He was a benefactor to many poor scholars and assisted with the repair of many churches. He was a fellow of the Royal College of Physicians, and after the RCP was destroyed in the Great Fire of London in 1666, Hamey contributed liberally to the rebuilding fund. The fine Spanish oak wainscoting that he funded is still at the RCP today. The portrait was painted in 1674 by Matthew Snelling. The marble busts depicted on the table are Hippocrates, the ancient Greek physician regarded as the father of western medicine, and Aristophanes, a playwright from ancient Athens. 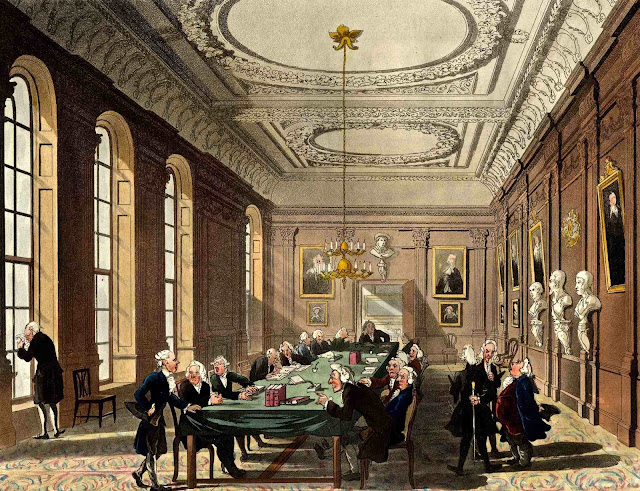 - The Royal College of Physicians -
Showing the bust of Baldwin Hamey over the door.


by Augustus Charles Pugin and Thomas Rowlandson.
From The Microcosm of London published in 1809.

This image was lifted from the website Spitalfields Life.
see - http://spitalfieldslife.com/2012/01/16/the-microcosm-of-london/


Spitalfield's Life is a wonderful Daily Diary (blog) and I recommend it wholeheartedly to anyone with an interest in the London of the past or the present.


Note -The Censors Room's in the Royal College of Physicians has oak fluted pilaster panelling which was probably designed by architect Robert Hooke and built by London wood carver Thomas Young in 1675. The wealthy physician and censor Dr Baldwin Hamey (1600-1676) purchased the panelling to line the dining room of Hooke's new purpose-built College in Warwick Lane. Hamey's eulogy in the RCP annals notes: ‘He completed at his own expense the whole seelinge work of our dining room, so ornately, so elaborately constructed’.  The word 'seelinge' (ceiling) was then used to refer to any cladding of a wall for draught proofing. 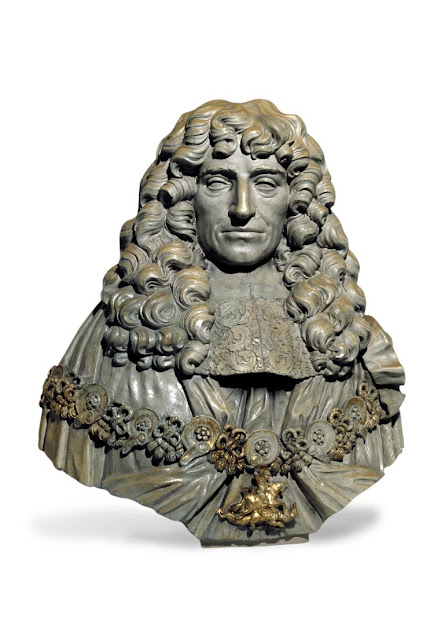 Unique Stone ware pottery bust of Prince Rupert of the Rhine
by John Dwight.
The bust is attributed to Edward Pearce. 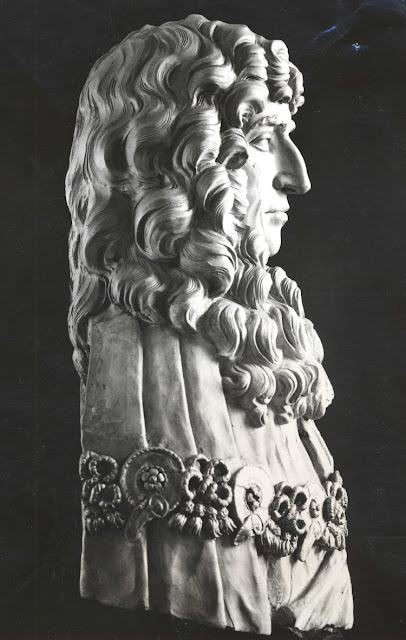 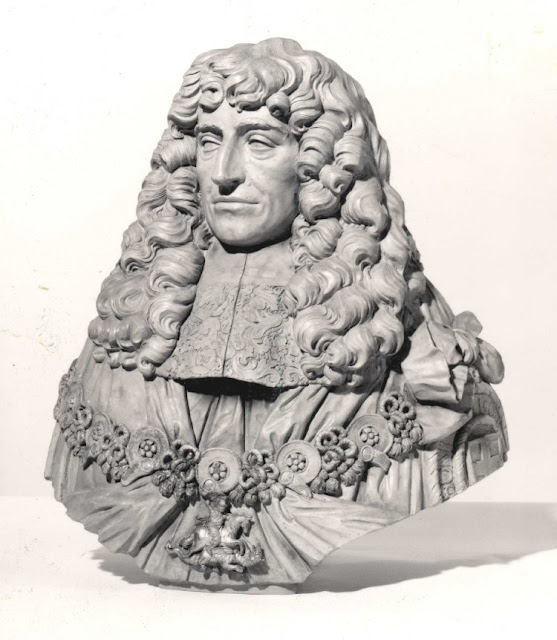 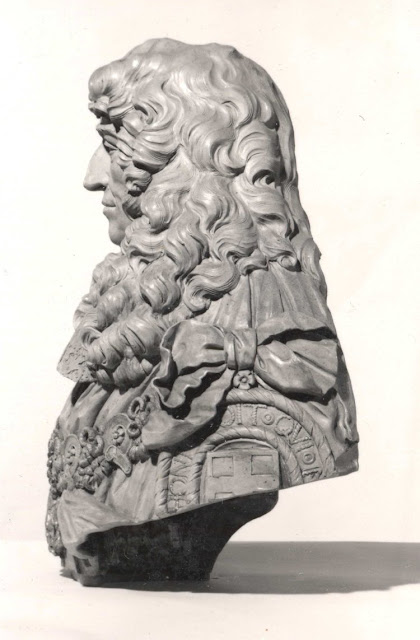 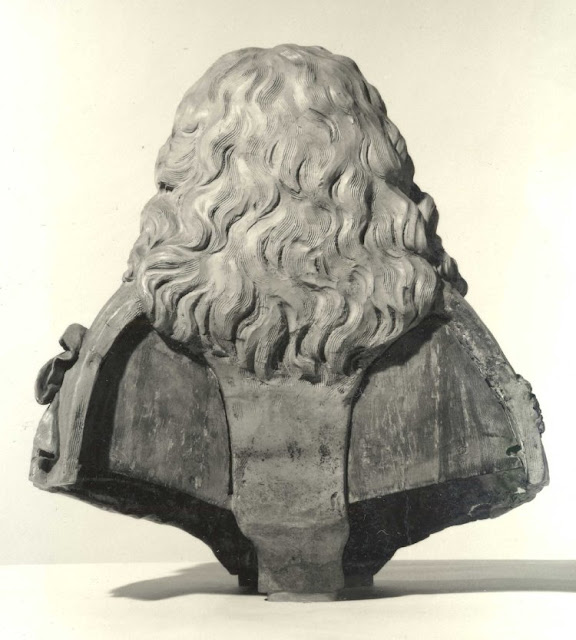 ________________________
John Dwight, (1633 - 1703), Potter;  He established the Fulham Pottery circa 1671 - 73, studied Oxford in 1650s under Boyle. In 1668 he was serving as Registrar to Bishop Wilkins of Chester, who was Secretary of the Royal Society. In 1672 he obtained the first of his patents for manufacturing 'porcelain'. Between 1671-3 he established a stoneware factory at Fulham, West London (excavated in the 1970s), which entered commercial production by 1676 when it contracted with the Company of Glass Sellers to sell their products in preference to Cologne ware. Married to Lydia Dwight, his  daughter also Lydia Dwight.
The bust was with the Dwight family until 1862, and then entered the C.W. Reynolds Collection. It was purchased by the BM in 1871 for £41 - 19s
Fragments of another of these busts were excavated in the 1970's at the site of the Fulham Pottery and are now in The Museum of London.
The production of this bust is an extraordinary achievement - The manufacture of a terracotta bust of this scale is fraught with technical difficulties. Something that continued to hinder the manufacture of terracotta busts in the Eighteenth century, particularly those busts by Michael Rysbrack, which are marred by firing cracks. These cracks were generally filled and the busts painted to disguise the cracks. Roubiliac seemed to have solved the problem by making the clay of uniform thickness, even so he must have had a few disasters. The quality and fineness of the clay is also critical.
In February 1674/5 Robert Hooke appears to have proposed that Dwight should make a "porcellane" bust of Dr Baldwin Hamey, but it was eventually made in marble by Pearce.
Robert Hooke reported to the Royal Society on 5th December 1678 'that there was a method of making very thick pieces of earth to be burnt without breaking or chopping; that Mr Dwight had made some heads of earth as big as the life; that the earth was as hard as porphyry; and that the excellence of the China earth was that it would endure the greatest fire without vitrification'
Info and Images from British Museum.
Prince Rupert (1619-1682) was the grandson of King James I of England and VI of Scotland. He spent his early life in Holland, where he had an outstanding career as a soldier. During the English Civil War he fought for the Royalists in most of the major battles, and was promoted to general. After the Restoration of Charles II to the throne in 1660, he distinguished himself in a naval career, becoming First Lord of the Admiralty in 1673. Prince Rupert was also an inventor of several metalworking processes, among which was the improvement of the new mezzotint engraving process. He had been taught the process by Ludvig von Siegen in 1654. he is known as a practitioner of the art of mezzotinting in his own right, particularly with his print of The Great Executioner holding the head of John the Baptist.
He is buried in Henry VII's Chapel at Windsor Castle. This bust shows Prince Rupert wearing the collar and star of the Order of the Garter, of which he became a Knight in 1642. 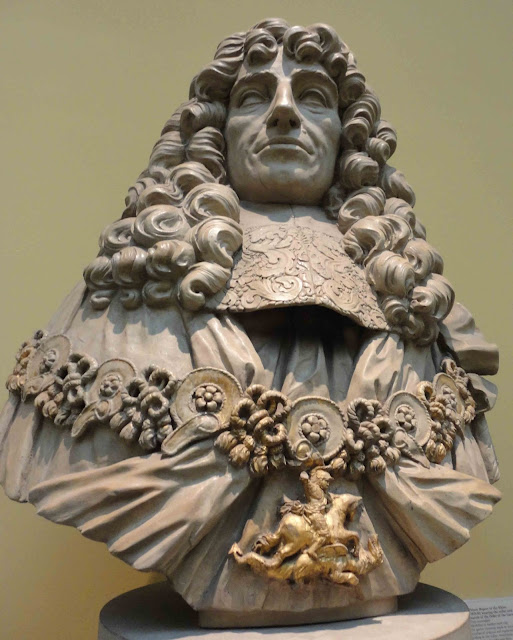 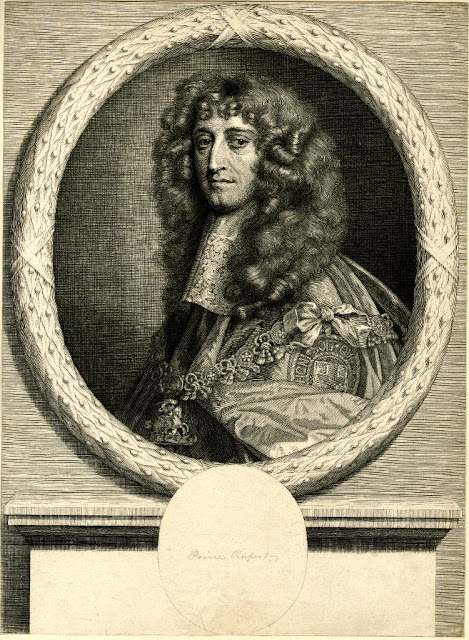 Prince Rupert of the Rhine.

Abraham Blooteling Engraver and mezzotinter. A key figure in the transfer of Dutch mezzotint to England, but he has been very little studied. The documents about him were assembled by A.D. de Vries (Oud Holland, III 1885, pp.64-7 and 137-9). He was the pupil of the engraver Cornelis van Dalen, who had himself come to England in the 1630s (see Hind III pp.253-8 for fourteen prints with English connections). In 1660 he appears in Paris, where he was apprenticed by a 'Jean Saumert' to the well-known engraver Pierre van Schuppen (1629-1702), himself of Netherlandish birth (M.Grivel, 'Le commerce de l'estampe à Paris au XVII siècle', Geneva 1986, p.17). This explains the French character of his engravings; and if 'Jean Saumert' was Jan van Somer, it links him with another early mezzotinter. In Paris Blooteling met Wallerant Vaillant (q.v.) who probably revealed Rupert's mezzotint process to him. In 1665 Cornelis van Dalen I, whose children had predeceased him, made Blooteling his heir; this brought Blooteling back to Amsterdam, and his first dated print belongs to this year. In Amsterdam Blooteling collaborated with Wallerant Vaillant (see mezzotint below).

According to George Vertue (II 26), Blooteling and his son-in-law Gerard Valck were brought to England by David Loggan. But in fact he came with his family on 14 January 1673 on the order of Prince Rupert possibly encouraged by decreasing production of portrait paintings (after which Blooteling engraved his admiralty portraits) following the death of Bartholomeus van der Helst in 1670 and Ferdinand Bol's marriage to a rich woman after which the latter painted very little.
There are no documents for his time in London. In September 1678 he was in Amsterdam attending the christening of Valck's son, and in the immediately succeeding years seems to have divided his energies between London and Amsterdam. He certainly continued to work for the English market (he not only published under his own name, but made plates for Lloyd in the early 1680s), and quite possibly continued to make London his main base. In his later career he acted more as a publisher than as an engraver. 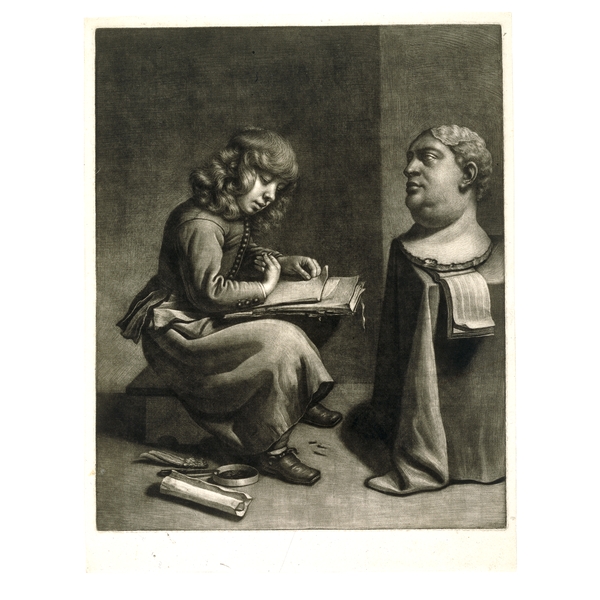 Mezzotint of a boy drawing the bust of the Emperor Vitellius.
Wallerant Vailant (1623 - 1677).

After working as an assistant to Prince Rupert, Wallerant Vaillant set up as an independent

Posted by David Bridgwater at 15:40