The Bevans at Barbers Barn Hackney.

In later life Silvanus Bevan II is described as Dr Bevan and seems to have practised as a physician from his house in at Barbers Barn in Church Street (later Mare Street), Hackney. A contemporary writer described the house and garden.


“In his house a variety of curious paintings and rich old china and a large library containing books on most subjects, several of the first printed ones in ethics, latin folios exactly imitating the written character of those days. A superb garden wherein its soil are all manner of flowering plants, vegetables fruit trees and flowering shrubs. He has a curious collection of fossils and has a knack of carving likeness in wood beyond any man in the kingdom”


Another extract - Last Sunday of all Sundays, the atmosphere sultry and airless, early that day I travelled to the village of Hackney and was introduced to the famous Silvanus Bevan, the Quaker F.R.S.. Very great welcome by him, living well on good food and drinks. Walked in the beautiful garden where there is in the earth every kind of flowers, plants and vegetables, also fruit trees and flowering shrubs etc., the noble statue of the gladiator mentioned by Pliny to have been found in Britain and other curious figures. An area by the garden with a variety of poultry, mostly foreign, two shells from India to hold water for them, weighing each about 300 lbs. In the house a variety of curious paintings and rich old china, and a large library containing books on most subjects several of the first printed ones in ethics, latin folios exactly imitating the written characters of those days: can speak Welsh fluently.


Greatly desirous of being acquainted with British Antiquities, but never saw British MSS, was surprised we had any. Wished that he could be fairly convinced that the Saxons borrowed their letters from us A hundred of other subjects we talked about I am to see him again and to get him Powells Caradog if possible.
He says his intellects are as strong as ever and has pleasure in reading a book now as he was when a young man. He was bred a chymist and apothecary, but has practised as a physician for many years. Now he is retired from all business. He is a bachelor (widower) and his brother who has a family of children keeps on the trade at the old shop in Lombard St. He is visited by most great men of taste, also by the ministry, being one of the leading men amongst the Quakers ... I wish I had known him sooner. 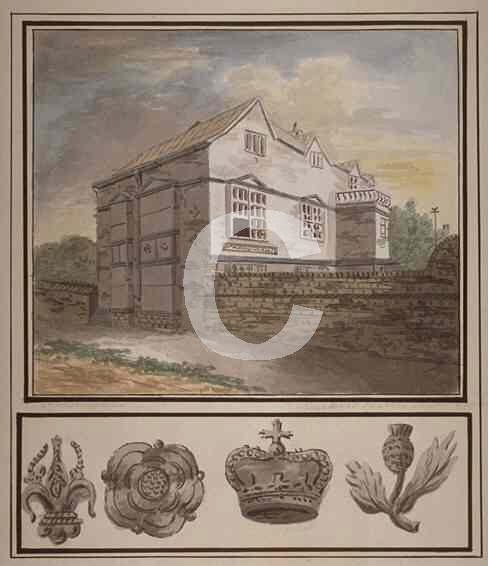 Barbers Barn was on the East side of Mare Street (formerly Church Street), Hackney.

Near Hackney village, south of the modern corner of Darnley Road, stood a three-storeyed gable-ended house reputedly built c. 1590. (fn. 2) It was granted in 1658 with nearly 4 a. of pasture called Barber's Barn to John Jones, who held adjoining premises and presumably leased it to the regicide Col. John Okey (d. 1662). (fn. 3) The house, formerly Barber's Barn, was occupied with 1½ a. by Katharine Clarke, widow, in 1715, when John Bird mortgaged it to his fellow citizen of London, the grocer John Iveson. (fn. 4) It later passed to the nurseryman Conrad Loddiges, who replaced it with his own house and Loddiges Terrace. Residents in the terrace were to include the line engraver George Cooke (d. 1834), who worked for Loddiges, and his son Edward Cooke (d. 1880), the marine painter. See - British History online pub. 1995 -
http://www.british-history.ac.uk/report.aspx?compid=22697 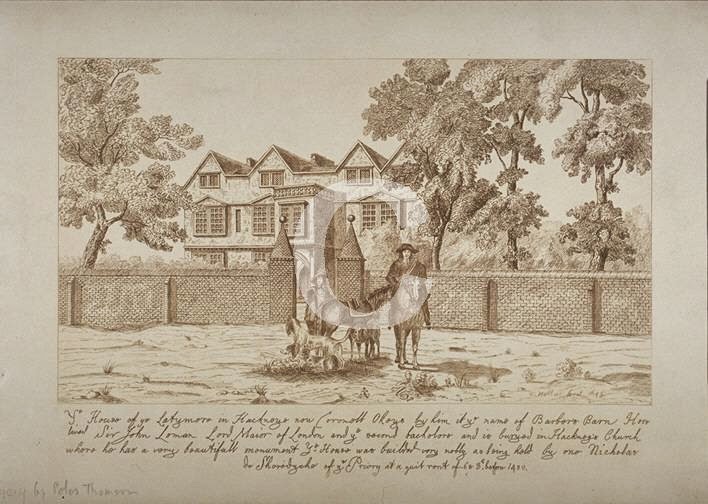 A mid 18th century engraving of a view of Barbers Barn, Hackney.

These two images from Collage - http://collage.cityoflondon.gov.uk/collage/app   a very useful resource for pre photography topographical of London and its environs. Unfortunately this collection was digitalised at the turn of this century and the images on the site are very low resolution and watermarked. 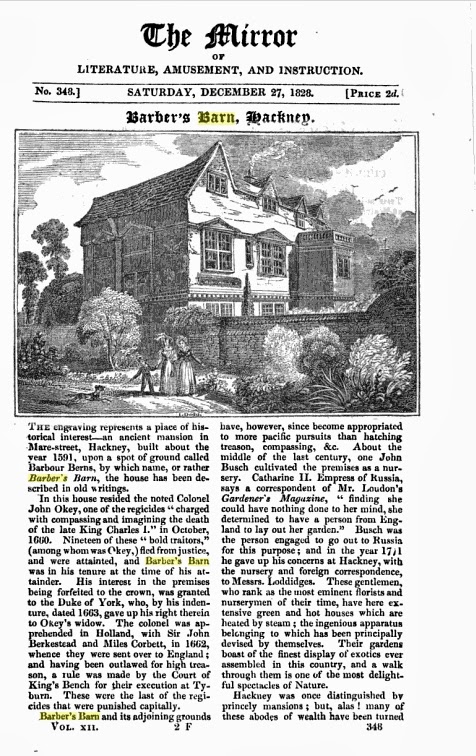 Article from the Mirror 27th December 1828

This article states that the gardens and adjoining plot of Barbers Barn had been cultivated by John (Johann) Busch prior to his leaving for Russia in 1771 to become gardener to Catherine II, and that the gardens were then taken over by Conrad Loddiges (another German émigré). His business went on to become Loddiges and Sons and by the 1820's had become the largest plant nursery in the world.
It closed between 1850 and 1854. 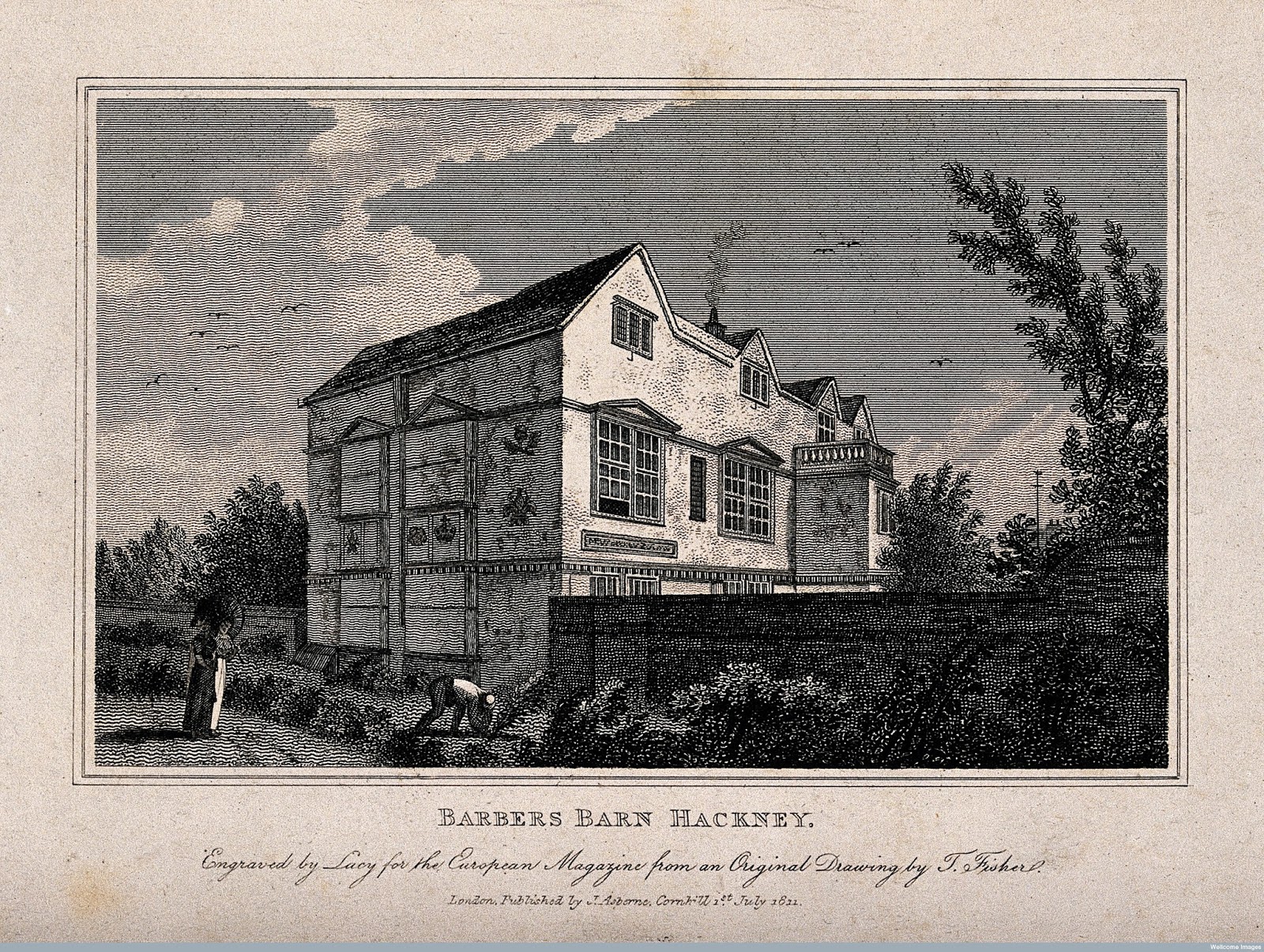 Engraving of Barber's Barn from the European Magazine, 1st July 1811
Image from The Welcome Library 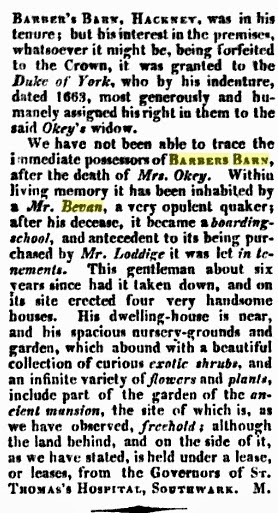 Article from the European Magazine  Vol. 59. 1811. Describing Mr Bevan as "a very opulent Quaker". It suggests that the Bevan brothers probably owned Barbers Barn, but the adjoining land had been leased from St Thomas Hospital. Barbers Barn was demolished in about 1805by Conrad Loddiges 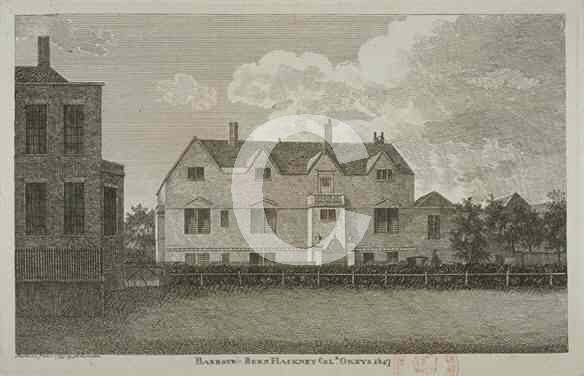 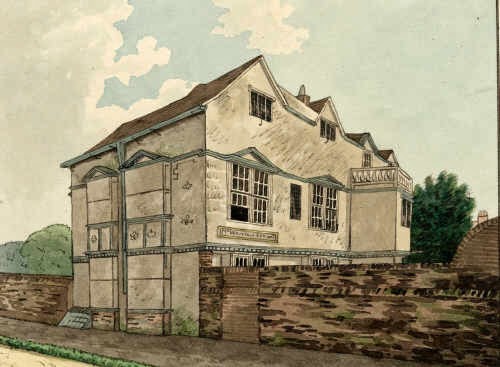 Near Hackney village, south of the modern corner of Darnley Road, Hackney stood a three-storeyed gable-ended house reputedly built c. 1590.  It was granted in 1658 with nearly 4 a. of pasture called Barber's Barn to John Jones, who held adjoining premises and presumably leased it to the regicide Col. John Okey (d. 1662).   The house, formerly Barber's Barn, was occupied with 1½ a. by Katharine Clarke, widow, in 1715, when John Bird mortgaged it to his fellow citizen of London, the grocer John Iveson see Victoria County History. 1995.

Silvanus Bevan arrived in Hackney in 1737 where he is first shown in the poor rate book. He occupies the house shown third in the listin the " Church Street District, the former house occupant being 'Pouliero' The rates payable are £2.5.0. almost as much as large villas in Mare Street.

In 1739 Silvanus Bevan and his neighbours are signatories to a petition concerning the church vestry.

In the 1760's unusually Silvanus Bevan's poor rate is shown as including the church rate.
Hackney Archives Dept. M2454

1768/9 Timothy Bevan first shown as replacing Silvanus Bevan as the ratepayer for this house in the land tax records. There is a gap between 1764 -68 P/J?L21ff, P/J/LT

1787 - 90, House occupied by John Vowell of Leadenhall Street, a director of the Royal Humane Soc.

From Old and New London -"The ancient house having become the property of
Mr. Conrad Loddige, was taken down many, years ago, and Loddige's Terrace, together with some
residences called St. Thomas's Place, were built on its site".

In August 1776 Joseph Gurney Bevan son of Timothy Bevan wrote to Peter Columbine and Sons " My father has lately relinquished to me his drug business together with his house(in Plough Court) which latter not being yet cleared of the workmen and almost without furniture is not fit for the reception of company. On his retirement Timothy Bevan moved to Hackney but returned to Plough Court to write letters or orders for his son. In 1783 Joseph Gurney Bevan wrote " My parents now live at Hackney and considering their age are favoured with very good health..."

Joseph Gurney Bevan wrote to a correspondent in 1783 saying, "My brother Silvanus (son of Timothy Bevan I) left the house (Plough Court) in 1767 and became a banker. He is at present married to a second wife (Louisa Kendall) by whom he hath five sons, My brother Timothy, continued in partnership with my father until the forepart of 1773 when they separated" (Timothy Bevan's the youngers decease was in the same year).

Timothy Bevan I was still insuring the contents of Barbers Barn  to the value of £600 including printed books to the value of £150 - 19th Jan 1785 - Records Guildhall Library
Register of the Sun Fire Office no 327.

I would appear that the Bevans had owned or leased Barbers Barn before 1745 where the Elizabeth Barclay first wife of Timothy Bevan died on 30 August 1745. The gardens were cultivated continually both as pleasure grounds and in the advancement of Botany first by Silvanus Bevan, followed by Johann Busch and then by the Loddige family until 1865 when they were sold and built upon. 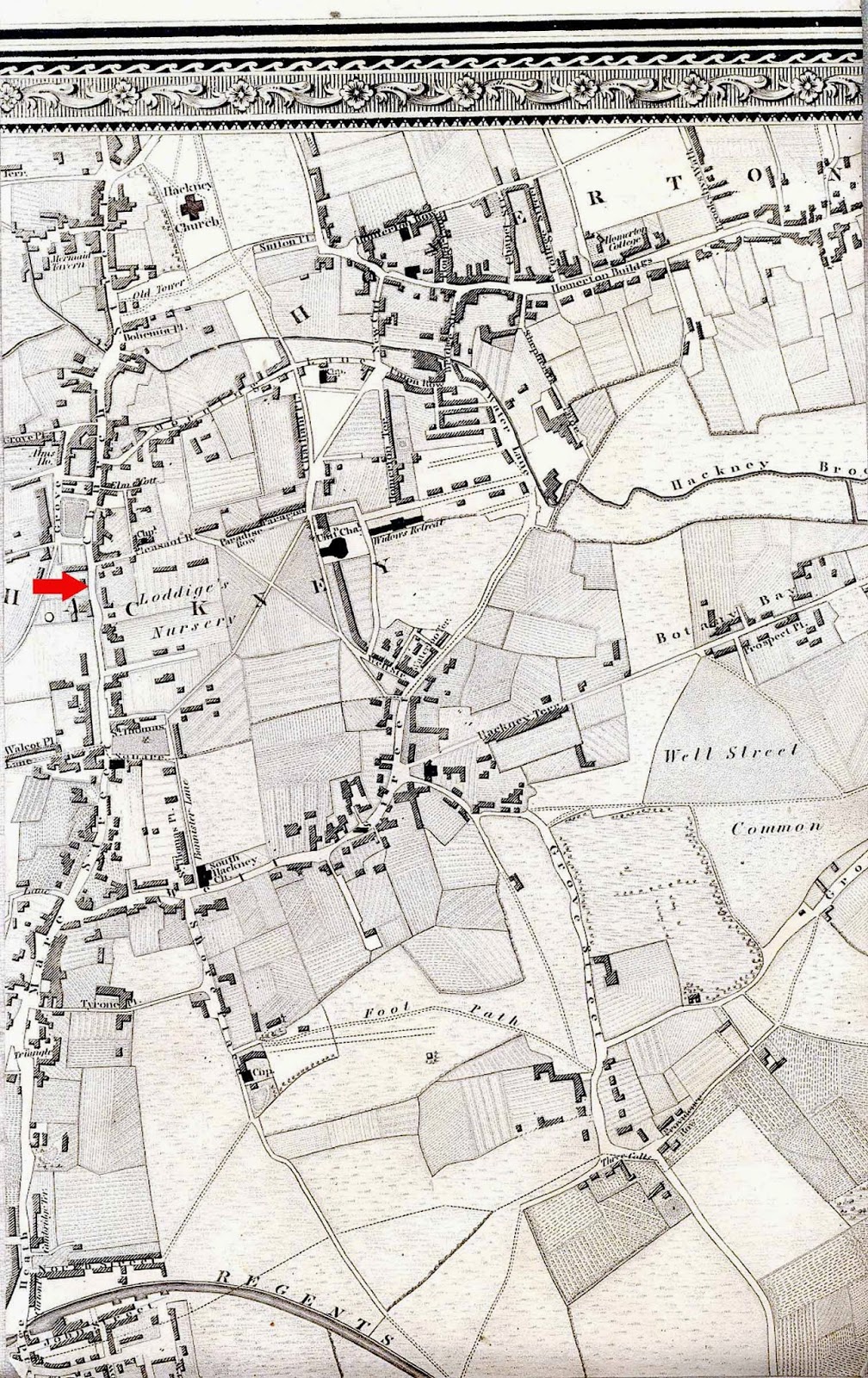