A Brief History of the family home of Alexander Pope at Plough Court, Lombard Street City of London and it's Occupants.

It is a peculiar coincidence that Silvanus Bevan, Apthecary and amateur sculptor, an executor of the will of John Vandewall and a name that crops up in the life of his son, Samuel Vandewall (whose wife Martha gave the Roubiliac bust of Pope to William Seward), lived and worked at Plough Court, formerly the family home of Alexander Pope in the late 17th century, a further coincidence is that the family of Martha Vandewall went on to live at the Pope house, Whitehill House at Binfield, Berkshire.


Plough Court, Lombard Street. City of London. In the Parish of St Edmond the King, a Brief History.

In 1632 by the will of Sir Nicholas Raynton, a mercer of Lombard St who had been Lord Mayor of London, the Right Worshipful Company of Haberdashers, acquired two houses in Lombard St.


One of these houses was the former town house of Sir Nicholas Raynton, the other was distinguished by the sign of the Golden Fleece


On 26 April 1649 Plough Court was leased by The Haberdashers Company to Caldwell Farrington citizen and haberdasher for 29 years and the tenement known as the Golden Fleece was leased to Thomas Purcell citizen and draper for a similar term. The shop and warehouse were leased to Francis Barber for 28 years.


These buildings were all destroyed in the Great Fire of 1666. The Haberdashers Company decreed that these buildings should be rebuilt by the tenants and the leases extended to 61 years.

On the 24 July 1671 the Haberdashers Company assigned the lease of the tenement at the sign of The Golden Fleece to a "Nathaniel Pope, citizen and salter together with the buildings erected thereon by the said N.Pope".


So far I can find no link between Nathanial Pope (will dated 1678), and the family of the poet Alexander Pope, but it would seem to be a coincidence worth noting.


Plough Court was a cul de sac that elbowed south, off Lombard St, at a point a few steps west of Gracechurch Street. Gracechurch Street is the most important artery running north south and the main thoroughfare to London Bridge in the South, and Bishopsgate to the North. Lombard Street was also an important east - west thoroughfare and had for centuries been the centre of the Cities gold and
banking trade. 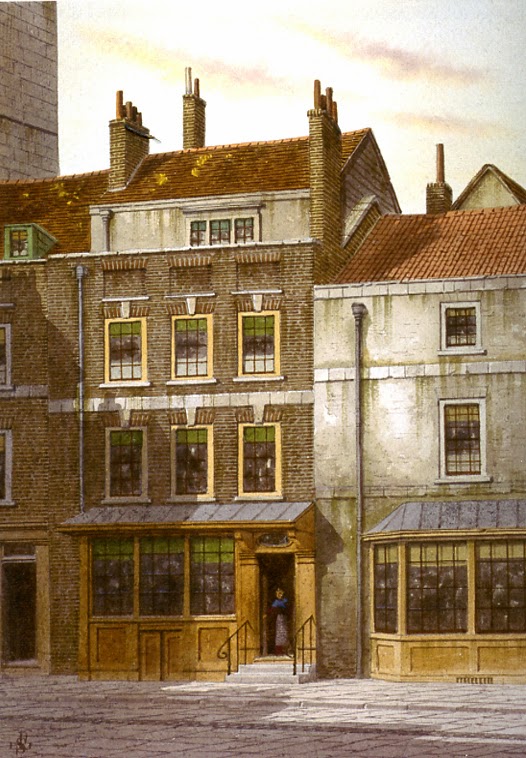 
The house lay at the bottom of Plough Court facing north. It was a comfortable house of five stories with a basement. Elegantly fitted up with several part marble hearths the chimneypieces set with Dutch tiles and having painted landscape scenes above, and wainscoting (panelling all around the room). In the court there were two lead cisterns to collect rainwater from the adjoining roofs. 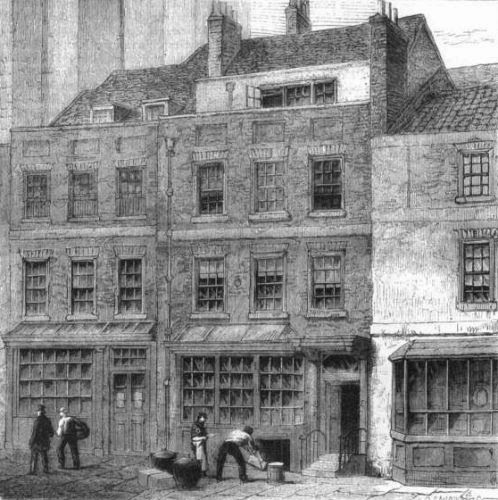 On 16 May 1679 all the previous leases having been surrendered except for that of Francis Barber, then in the hands of his widow, the Haberdashers Company granted a new lease of 99 years to John Osgood, a Quaker tobacco merchant, for all these premises except for the shop and backhouse occupied by the widow of Francis Barber. The lessee covenanted to rebuild the back part of the premises within two years. 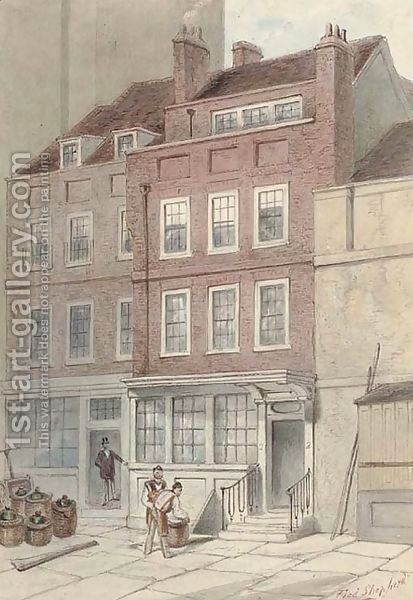 Watercolour of Plough Court by Shepherd 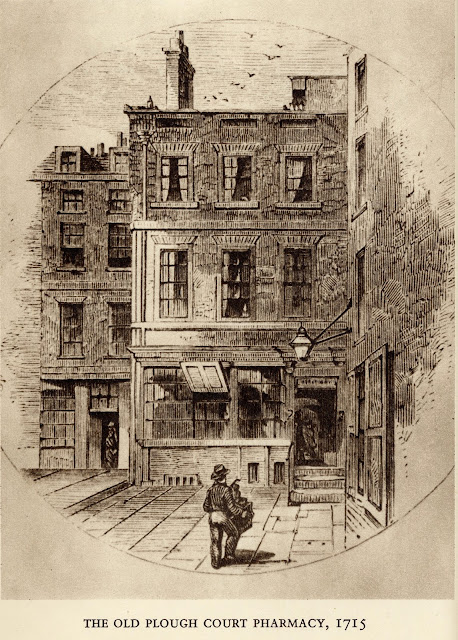 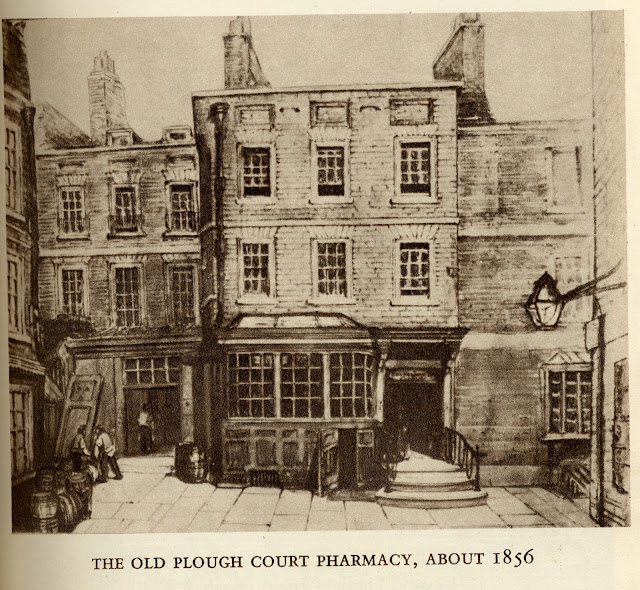 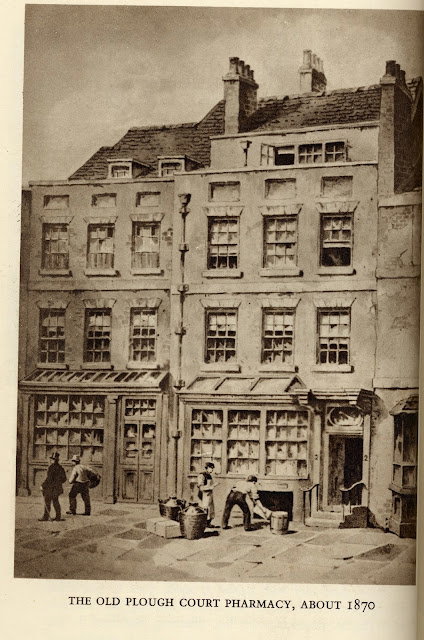 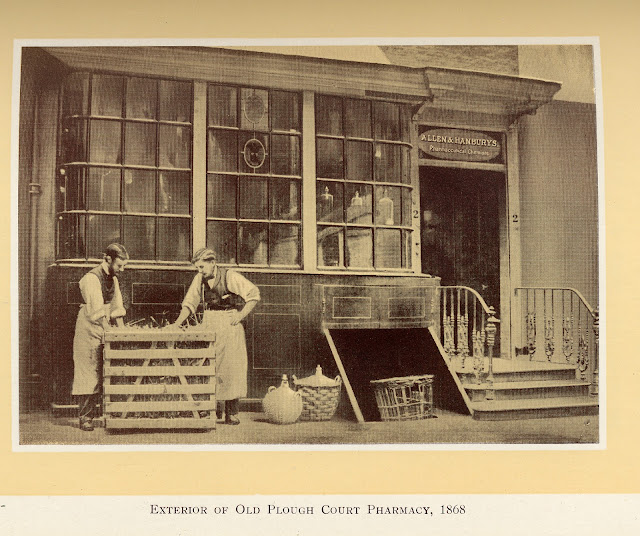 It would appear that the Quaker John Osgood subleased 2 Plough Court after the building work was completed to Alexander Pope senior in about 1680.

Alexander Pope senior (1646 -1717), linen draper, is described as living at Broad St, in the parish of St Benet Fink in 1677. (See - A Collection of Names of the Merchants living in and about the City of London, published by Samuel Lee in 1677 - copy in British Museum).


It should also be noted that Alexander Pope senior was also a linen draper dealing in Hollands, a very fine linen imported from the low countries. His first wife Magdelen died 12 August 1679 and was buried in the parish of St Benet Fink. He married again in 1686 Edith Turner of Towthorpe, Yorkshire and in May or June 1688 the future poet Alexander Pope (1688 - 1745) was born at Plough Court.


By this time Alexander Pope senior had been in partnership with his elder brother William trading in fine linens as far afield as Virginia. In 27 May 1684, William Pope was in chancery undertaking to collect payment from their Virginia agent for a shipment of Linens and other goods, for which the agreed upon quid pro quo was to have been some thousands of pounds of tobacco. See Chancery proceedings, Reynardson 86/84, Complaint 27 May 1684 - reply 6 June 1686. Unfortunately we do not know the outcome, or anything further on William Pope.


Alexander Pope senior retired from business in 1688 with the not inconsiderable fortune of £10,000

Daniel Hanbury writes in the Athenium of 4 September 1869 that number one Plough Court had been recently demolished and that Paul Bevan had told him of the family tradition that Alexander Pope was born in the second floor front room facing Lombard Street, of 2 Plough Court.

It was suggested in Volume 6 of Murray's Magazine of 1889 that Pope senior and Salem Osgood were in some sort of partnership. If this were true then it raises the possibility of Quaker merchants investing Catholic money in North America.

The Catholic Pope family did not stay for very long at Plough Court after the revolution of 1688 and in 1692/3 removed to Hammersmith, because of repeated proclamations that no Catholic could live within ten miles of Hyde Park Corner, where Alexander’s half sister Magdelene had married Charles Rackett who was from an affluent Hammersmith family. In 1695 Charles Rackett purchased Whitehill House, Binfield, Berkshire and in 1698 sold the property to his father in law.


Salem Osgood, another linen draper, the son of John and Anna Osgood took over the business and premises of Pope senior in about 1693 and remained until the lease of 2 Plough Court was assigned to Sylvanus Bevan II in 1715.

Ann Osgood b.1707 married Joseph Freame, son of John Freame of Freame and Gould who were the forerunners of Barclay's Bank.

In March 1725, John Osgood ( now described as of Coggeshall, Essex) was leasing for a term of 21 years to Silvanus Bevan II, the two messuages or tenements situated in Plough Court (ie. 2 & 3 Plough Court. The Sign of The Golden Fleece) “ in or near the south side of Lombard Street in the parish of St. Edmund the King, London.


Will of John Osgood father of Salem Osgood.

The lands and tenements in Lumbard Street, London, and Plow Court in Parish of St. Edmunds, held from Haberdashers' Company, Tenements in Spittlefields, county Middlesex, held from Mr. Bolch, to my wife, Mary Osgood, late daughter of William Welie, late of London, merchant, deceased, for life, also jE)ioo, and half of all my plate, also one third of the rents of my lands in Langley, county Bucks, which fall to me after my mother Webb's decease. To my son Salem Osgood and heirs, the said lands in Langley, also my dwelling house in Whitehart Court in Gracechurch Street, also £8000, £6000 to be laid out in purchase of lands, to be settled on him and his heirs, also all my messuages held from the Earl of Clarendon in county Middlesex, also the other half of my plate. A messuage in Plow Court, after my wife's decease, to my son John Osgood, also £2000 when 21, and £4000 to purchase land for him. To my son Obadiah Osgood, my tenements in Spittlefields, also £1000 when 21, and £4000 to purchase lands to be settled on him and his heirs male, and then failing them to his heir female. To my three sons, Salem, John, and Obadiah, and their heirs for ever, my two hundredth part of New Jersey in America with the Mannors, Royalties, and priviledges thereof. If any of my sons die, their portion to be paid to the survivors. To my executors £45oo in trust for my daughter Rebecca, wife of Francis Piatt, and their children. To my mother Hannah Webb £1oo. To my cozen John Mills £io, and to his three children, John, Hannah, and Mary, £50 when 21 or married. To children of my sister Sarah Bonifield £50 to be paid to Abraham Bonifield their father. To my brother Leonard Keys £30. To my partners, Hester Davis, Grace Davis, and Henry Gouldney, £5 each.

To the children of my sister Hester Billingsley, by her late Husband Richard Billingsley, deceased, £? to be paid to her or John Staploe, her present husband. To Francis Camfield, John Hall and Theodore Ecclestone £100; and to Elizabeth Camfield, Susanna Dow, Anne Ecclestone, Abraham Bonifield, and Leonard Keys, £20. To poor of Laurence parish, Reading, county Berks, £20, as Abraham Bonifield and Leonard Keys shall think fit. To poor in Castle Green in Bristol £10, as Thomas Gouldney and Isaac Davis shall thinke fitte. To my friend William Mucklow £10, and to my old servant Roger Harris £5, and to John Merchant 40s. Residue to Salem Osgood, my son.


Executors: Salem my son, Theodore Ecclestone, and John Hall, and £10 each to the last two. If they refuse, then to James Greene of Newington Greene, Fustian Merchant, and Robert Dickins, nigh London Bridge, Hop Merchant, as executors, £20 each. To poor of Low Ley ton where I now live, £10. To Coachman Jonas 40s. Witnesses : Dan : Coxe, Ric : Day, Tho : East, Gierke to Mr. Day. 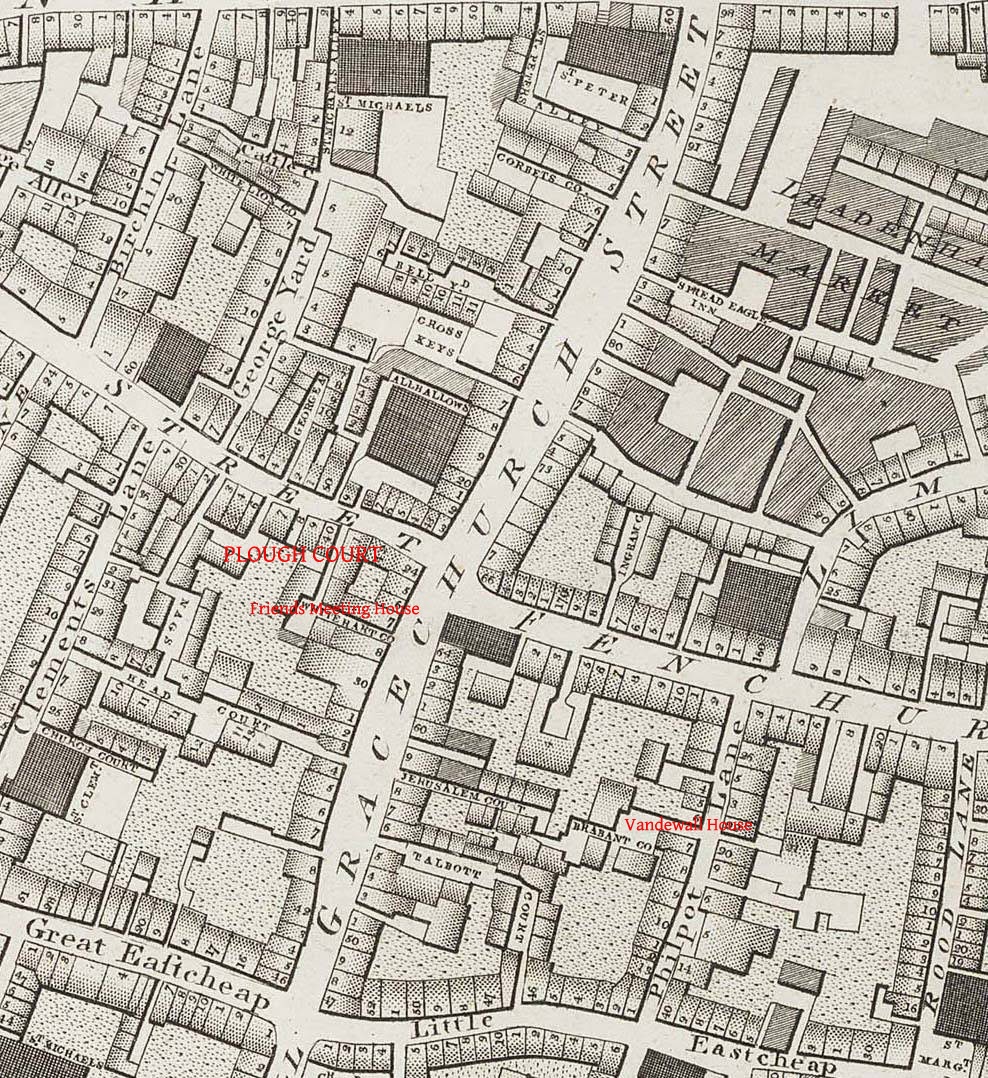 Location of Plough Court on Horwoods Map of London First Edition of 1792 /9.

In 1725 Silvanus Bevan II renewed with Salem Osgood, the lease of 2 Plough Court and took over the lease of the tenement called the Golden Fleece, 3 Plough Court, after the death the Widow Machin the previous occupier.

Here follows scans of the schedule attached to the lease of 2 Plough Court when it was renewed. 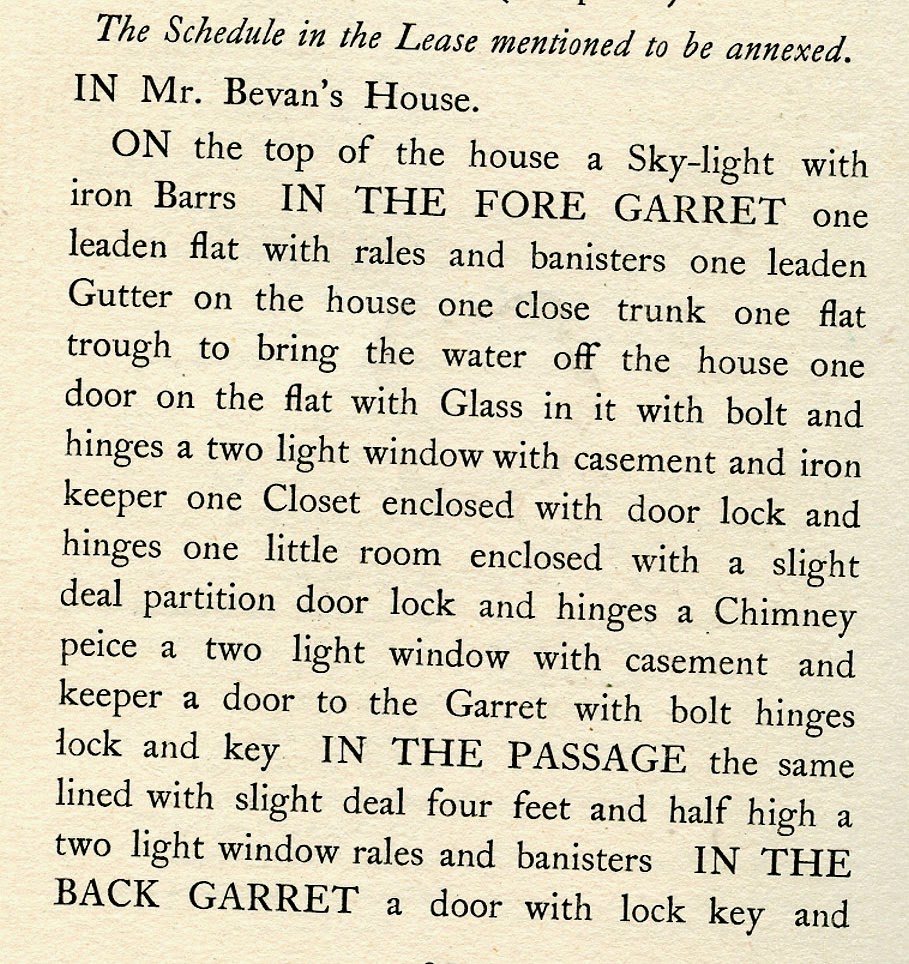 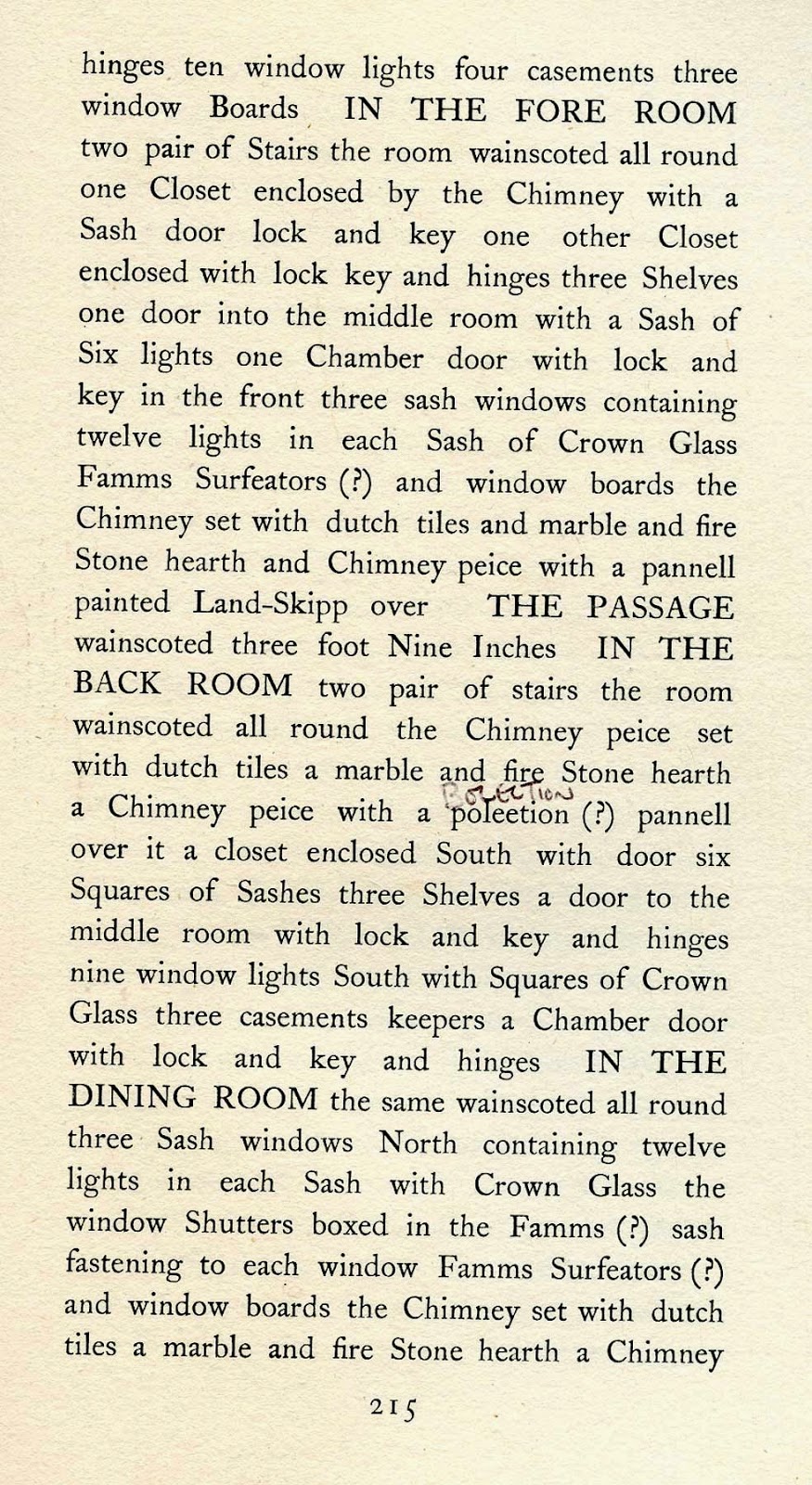 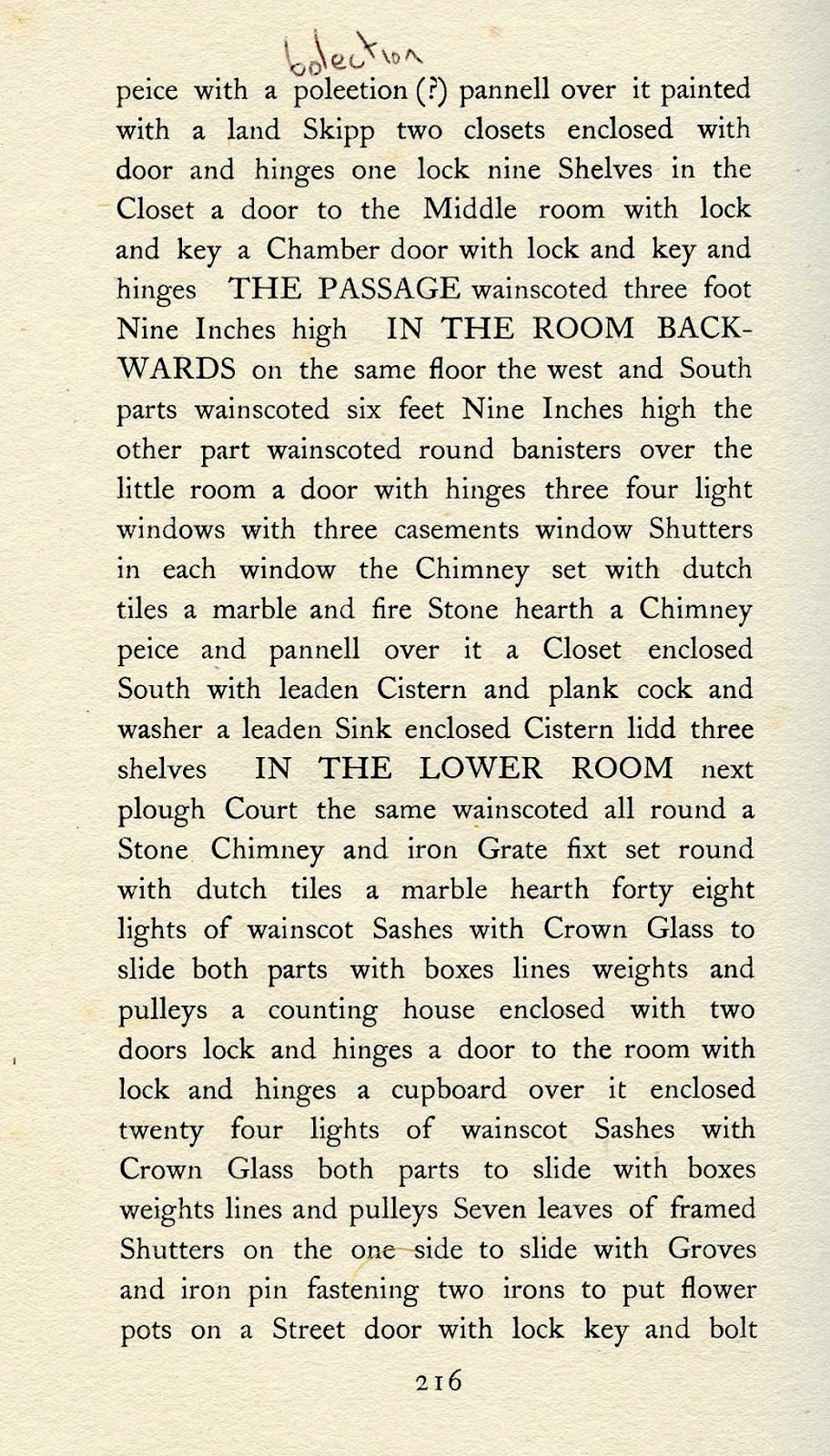 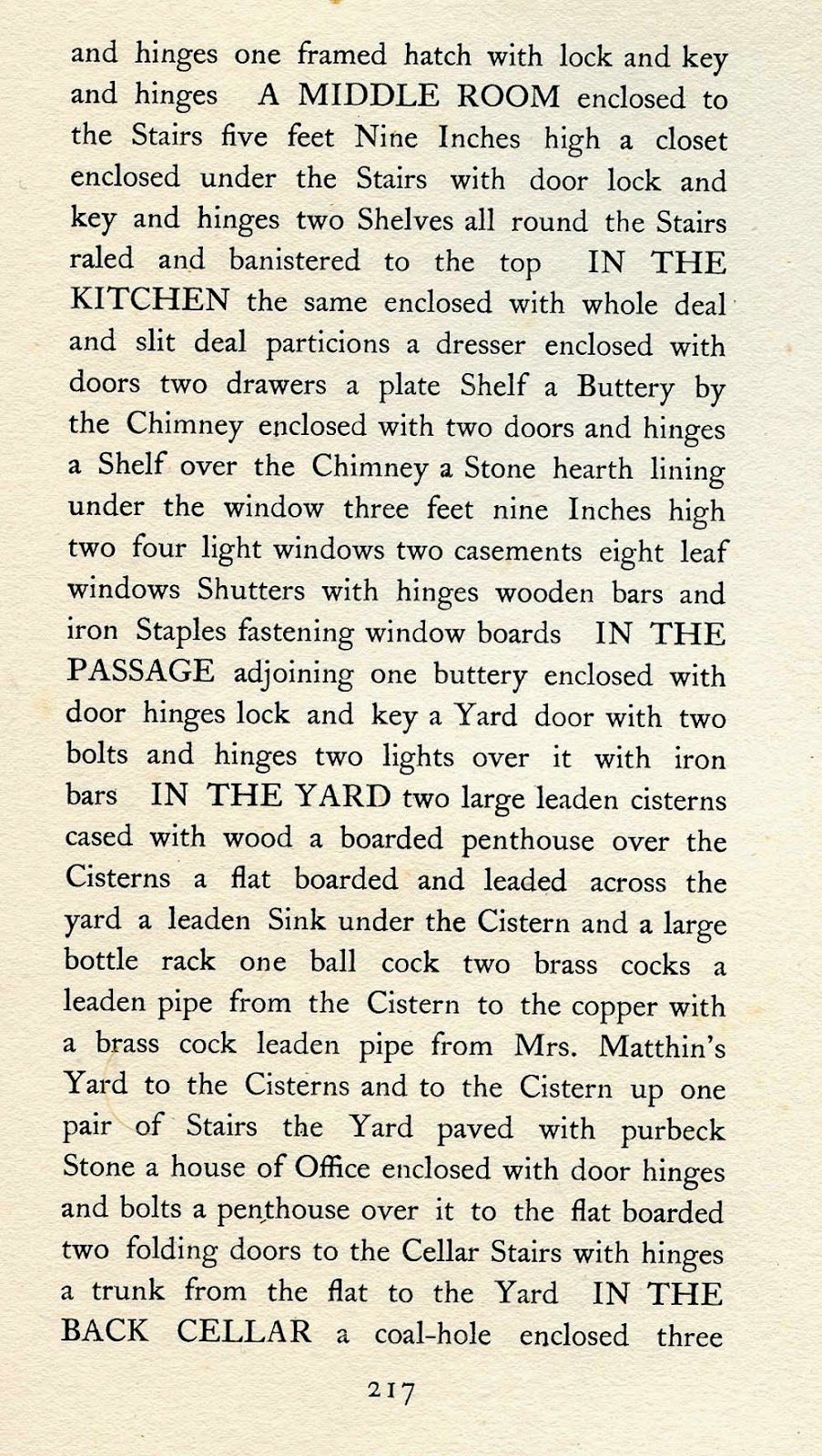 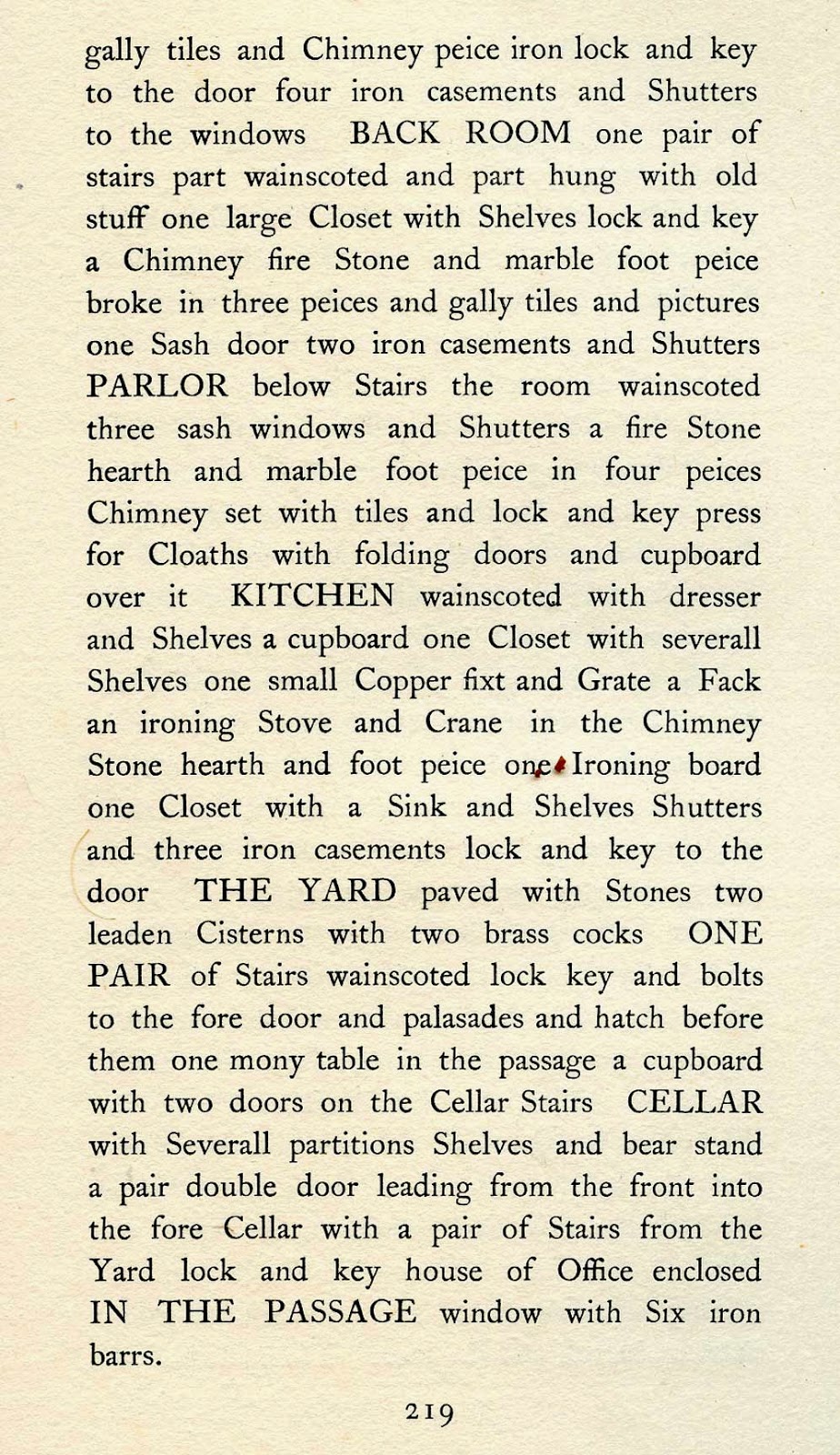 Location of Plough Court - Map Engraved for Thornton's New and Complete  History and Survey of London and Westminster,

Posted by David Bridgwater at 08:56