The Marble bust is on the monument in Holy Trinity Church, Pleshey, Essex.

Anonymous probably by a sculptor working in the workshop of Henry Cheere.

The monument to a design by Henry Cheere.

and The Plaster bust in the Moot Hall, Maldon, Essex.

Some notes on the busts, and Langleys (the family seat).

Another plaster bust is in the Town Hall, Colchester Essex.

For a good potted biog. of Samuel Tufnell see -

For another very useful source of information see -

Grandson of Richard Tufnell who was MP for Southwark in 1640.

Samuel was the son of John Tufnell (Tufnaile) , brewer, of St Mary's Undershaft, London, and Monken Hadley, Middlesex, and his wife Elizabeth Jolliffe, daughter of John Jolliffe, MP, merchant and alderman of London.

He matriculated at Merton College, Oxford in 1698. On the death of his father in 1699, he succeeded to the family estate, under the trusteeship of his uncles, Sir William Jolliffe and Sir Edward Northey.

He was admitted to Middle Temple in 1699 and called to the bar in 1703. He undertook a Grand Tour through the Netherlands, Germany, Italy and Switzerland from 1703 to 1705.

He became a Fellow of the Royal Society in 1709.

"Last Wednesday died in Albemarle-Street, Samuel Tufnell, Esq; of Langleys, in the County of Essex. He formerly served in Parliament for the Boroughs of Colchester and Maldon, in the same County ; and is succeeded in Estate by his eldest Son, John Joliffe Tufnell, Esq; Member for Beverley, in Yorkshire." 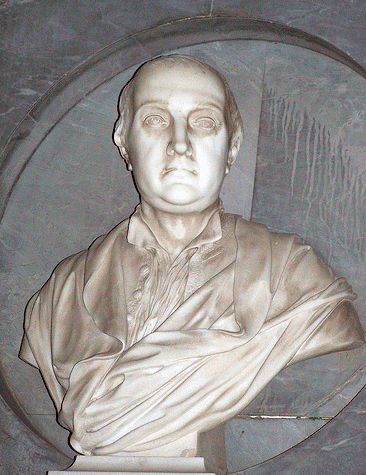 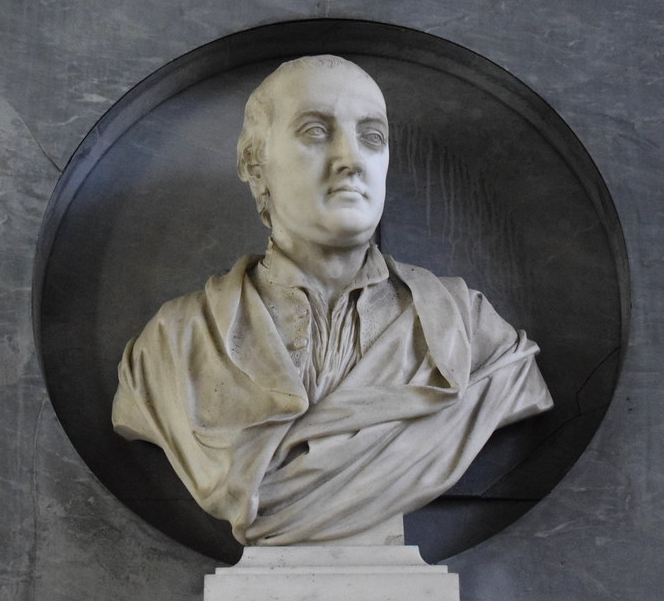 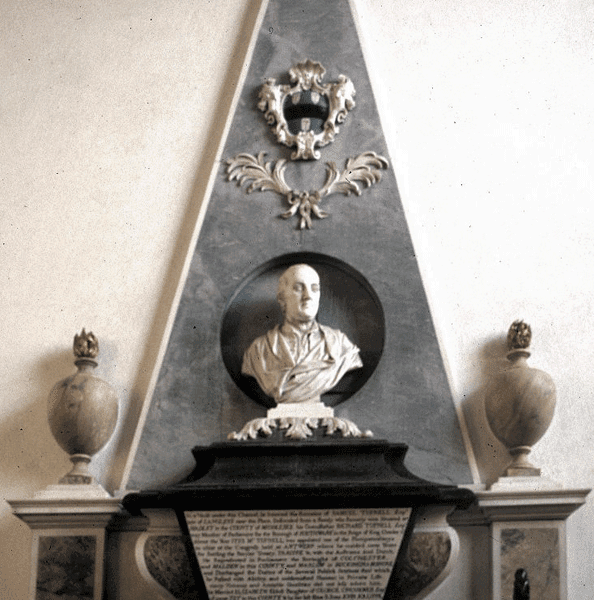 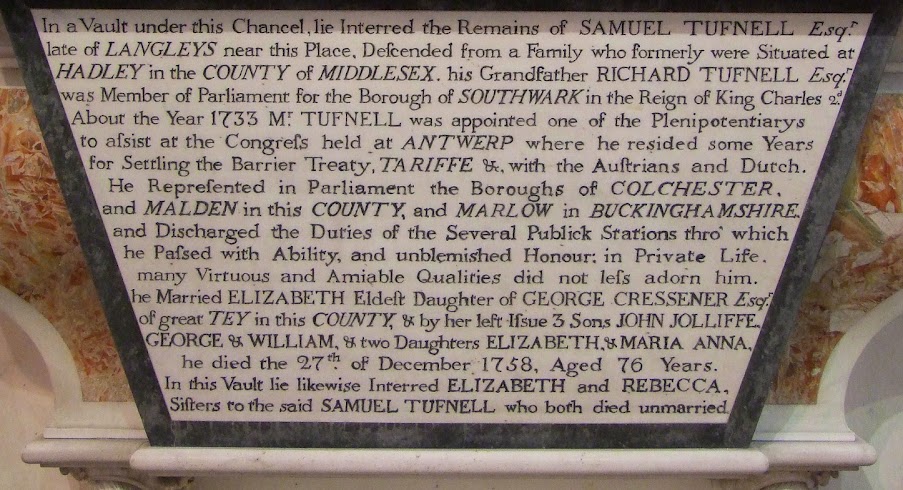 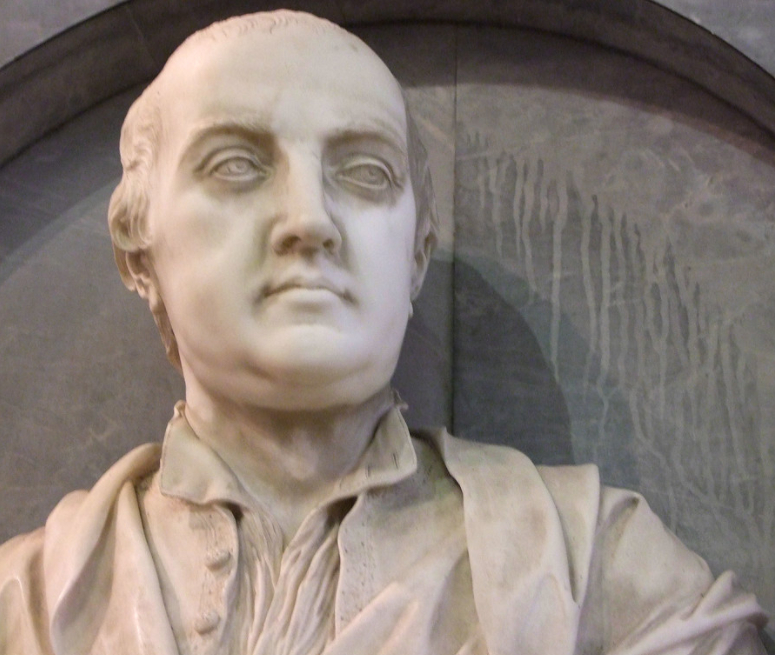 Web photographs - it has not been possible to make real comparisons with the plaster bust below but  it appears that the plaster bust has been taken from the marble.
It is dangerous to make assertions based on the appearance of the physiognomy (he was 76 when he died) but I would say that the bust shows a younger man suggesting to me that it was made some time earlier than the monument. 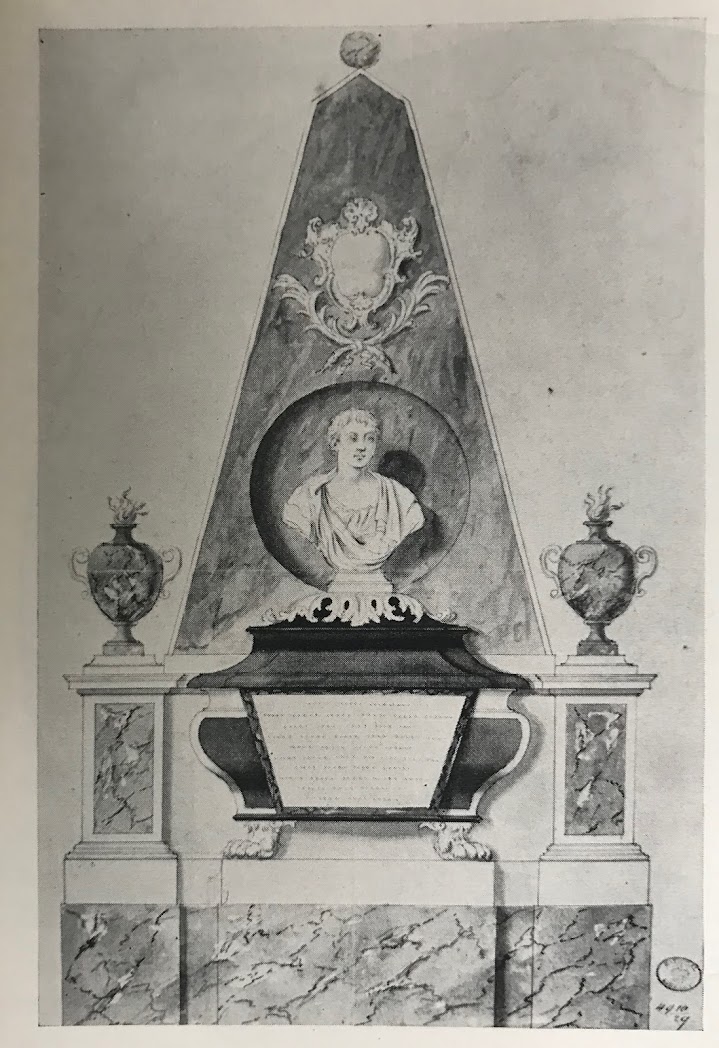 Drawing for the Samuel Tufnell Monument at Pleshey, from the studio of Henry Cheere
Illustrated in Designs for English Sculpture 1680 - 1860 by John Physick, V and A, 1969. 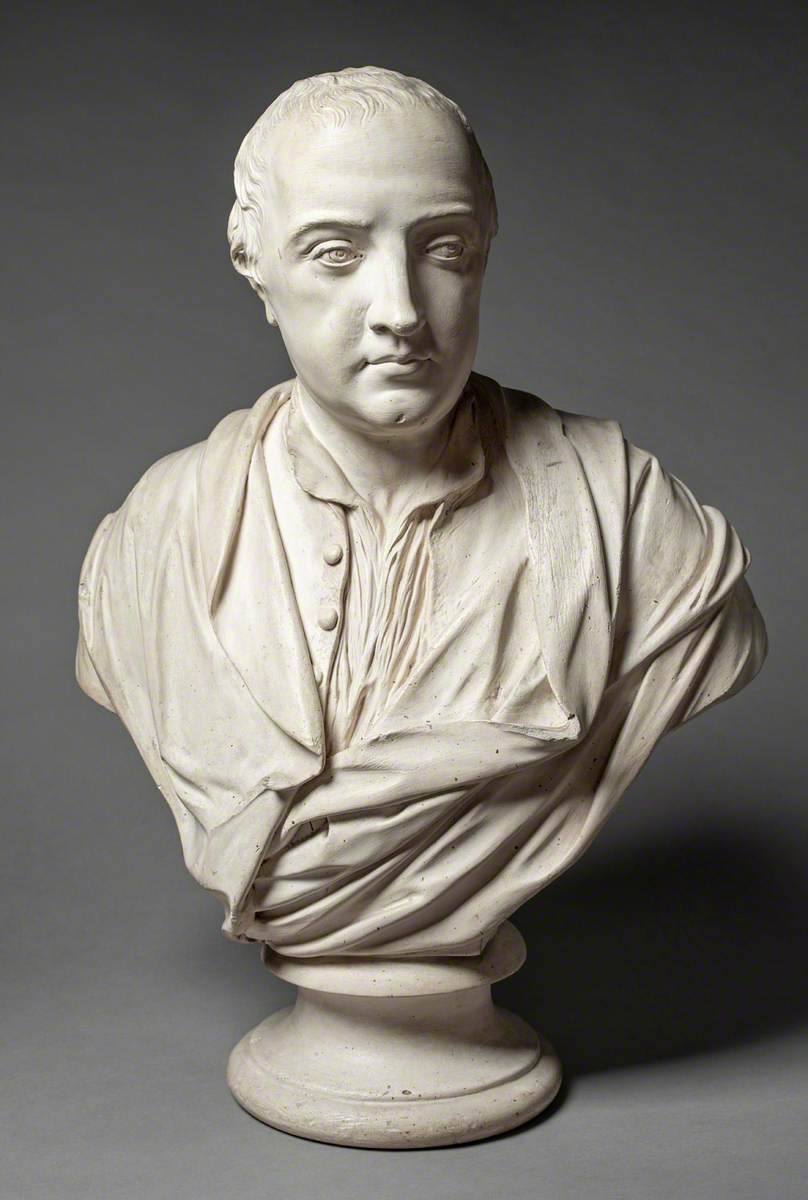 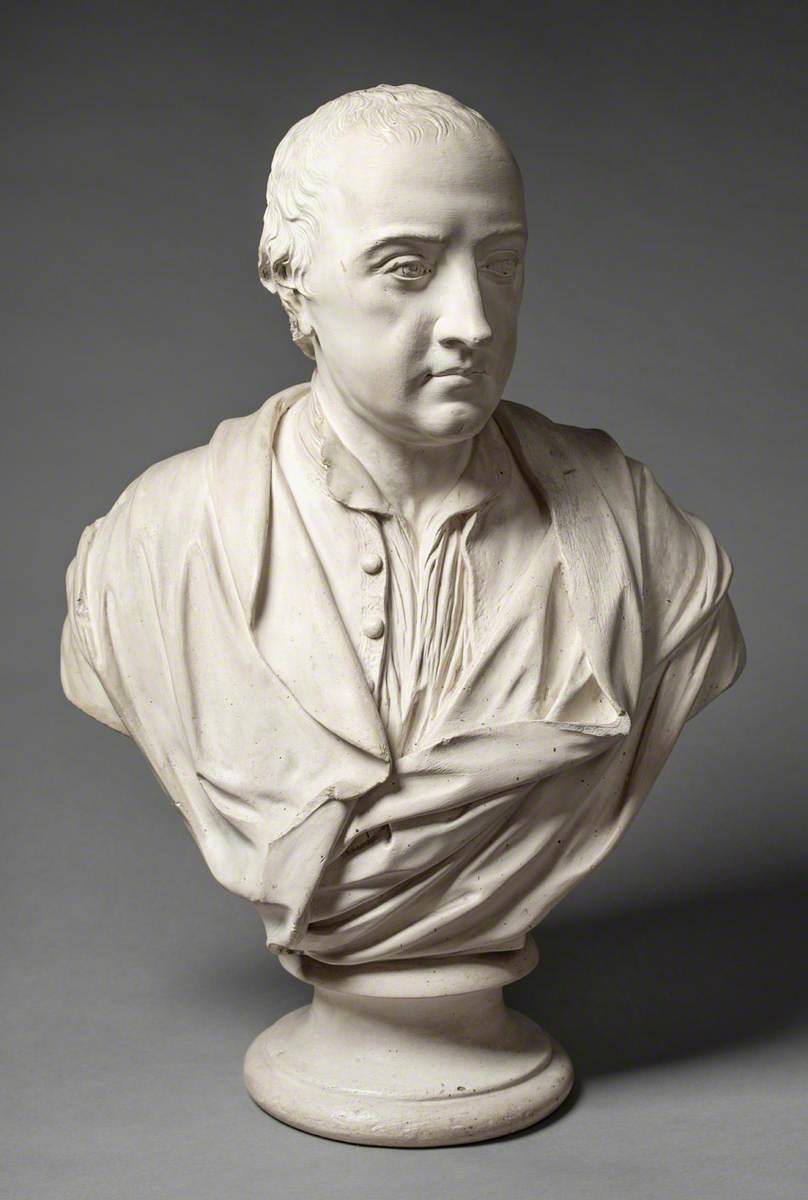 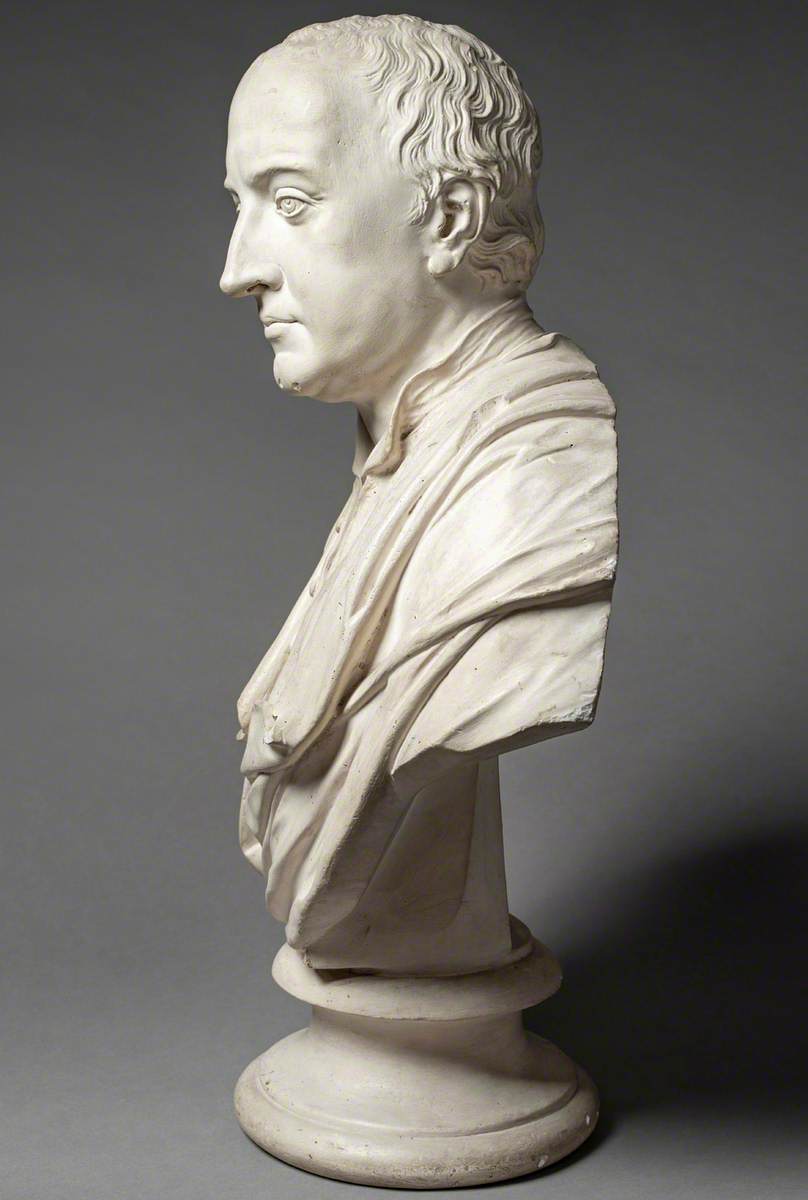 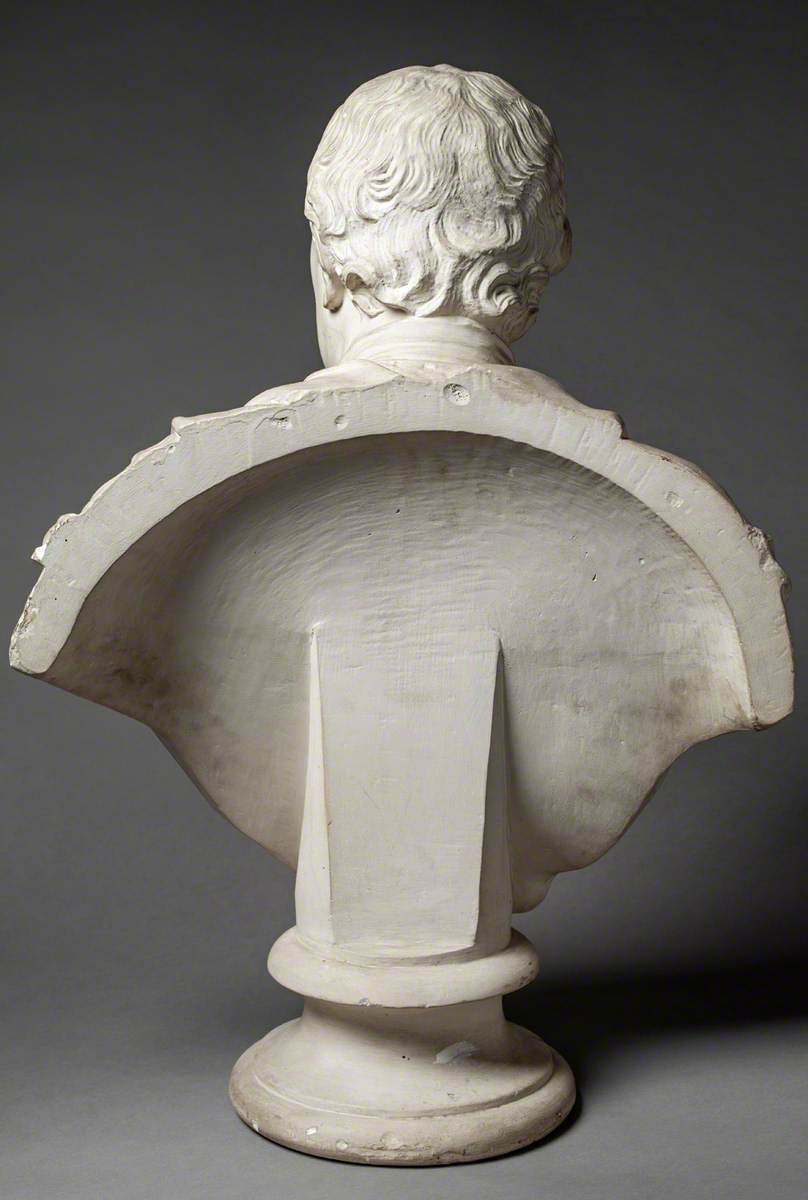 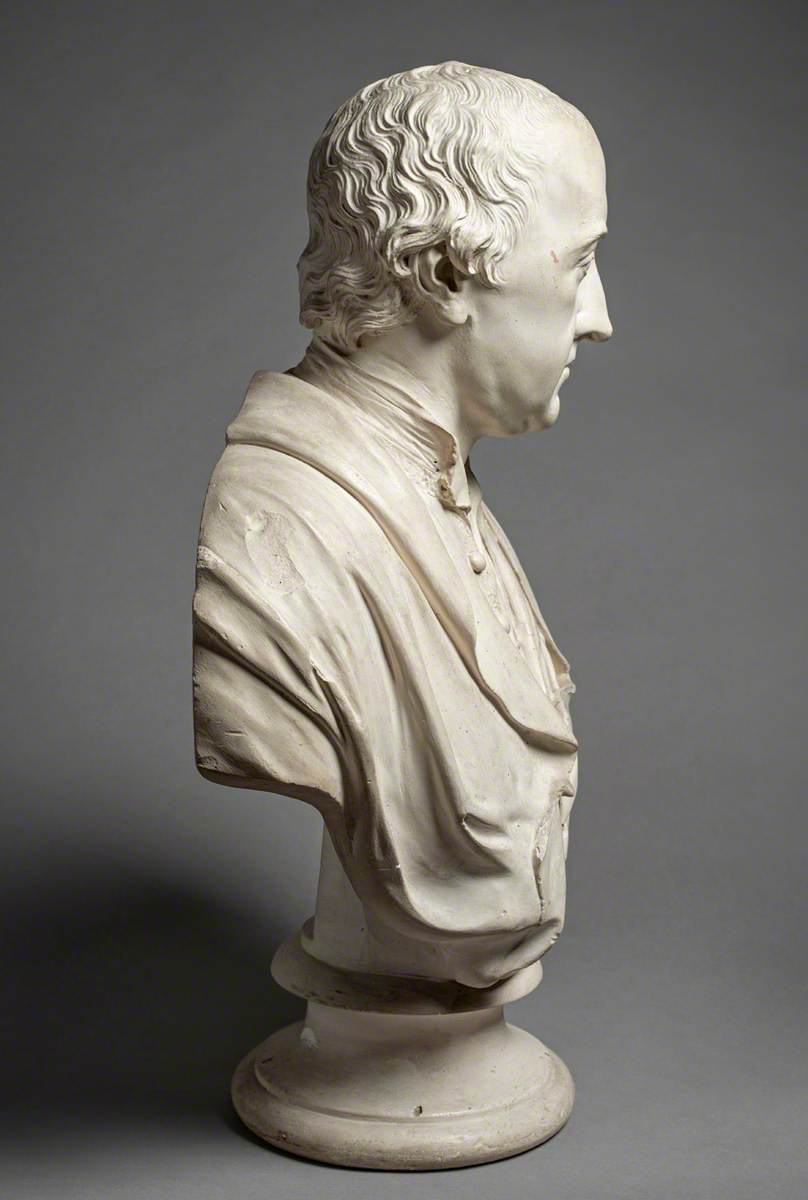 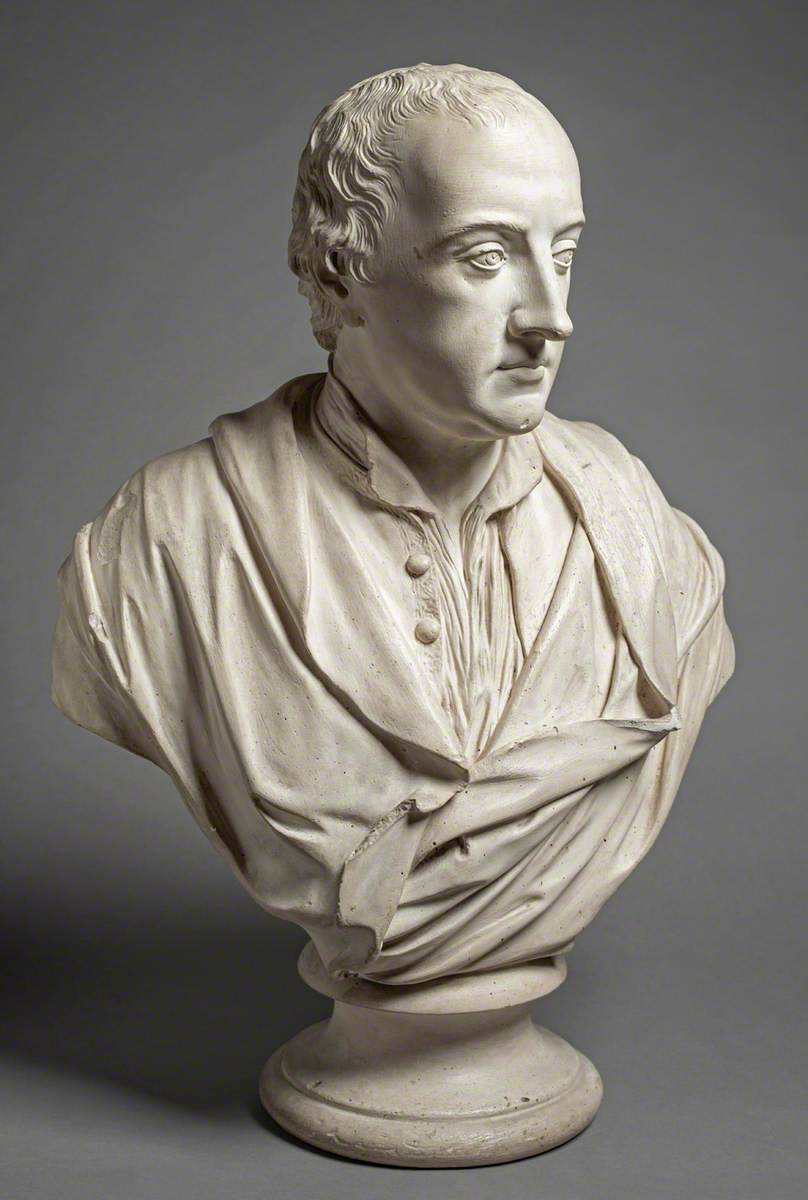 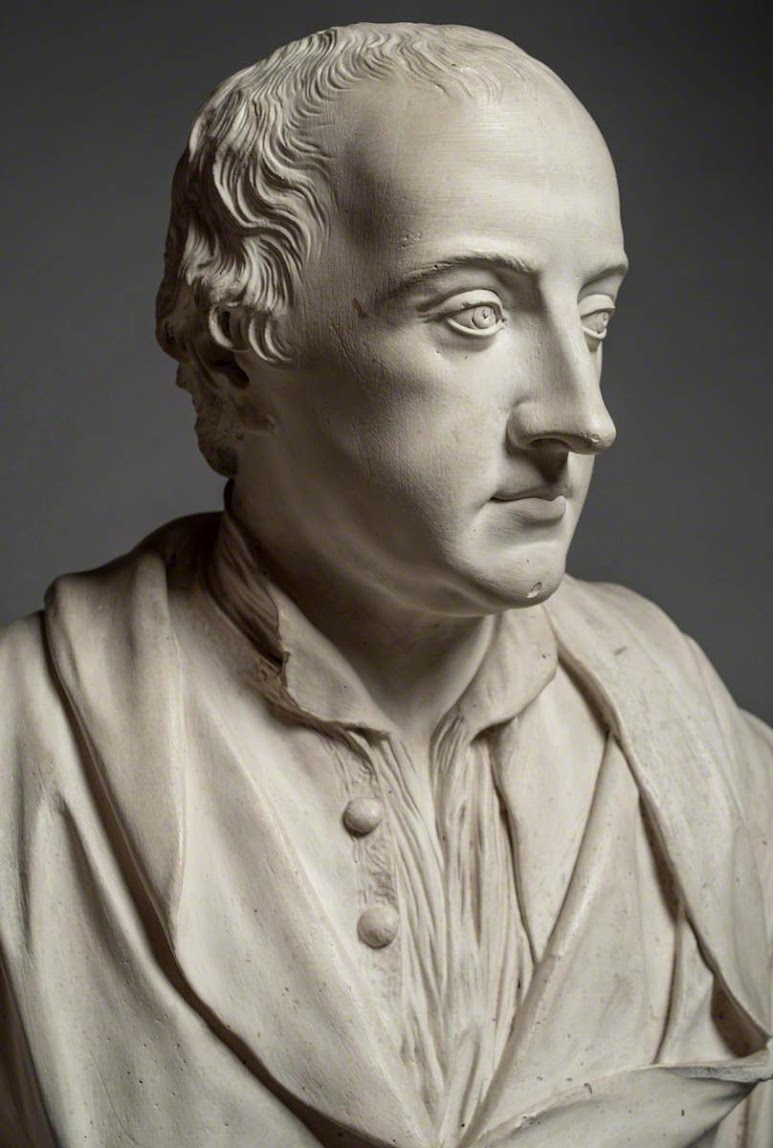 To me the turned socle suggests a later date for the plaster. 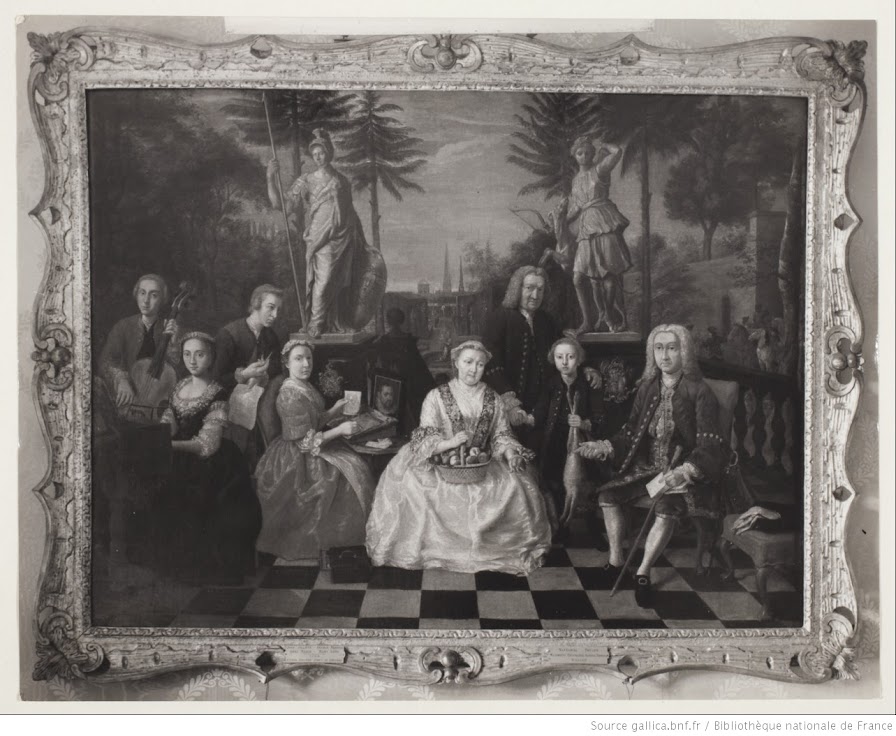 Depicting behind John Jolliffe Tufnell b. 1720, George Forster b. 1723 and Nathaniel Payler (of Nun Monkton Yorkshire) 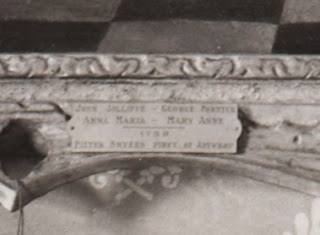 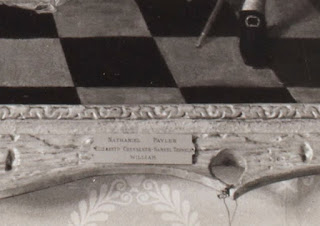 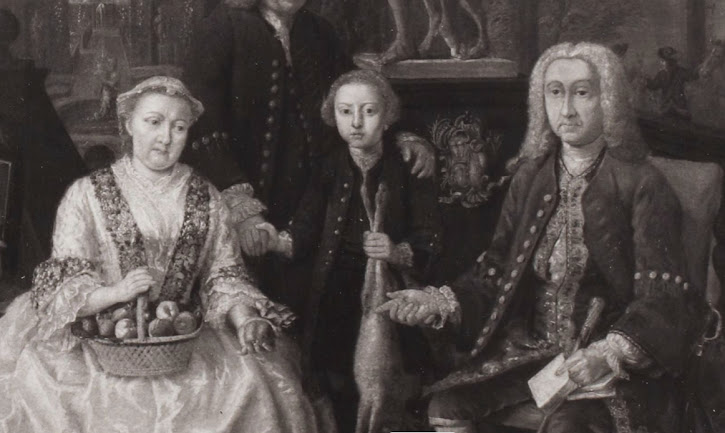 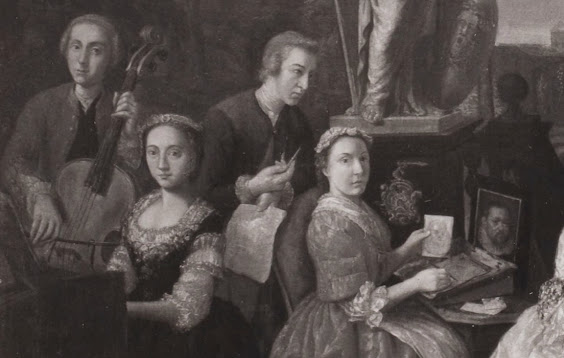 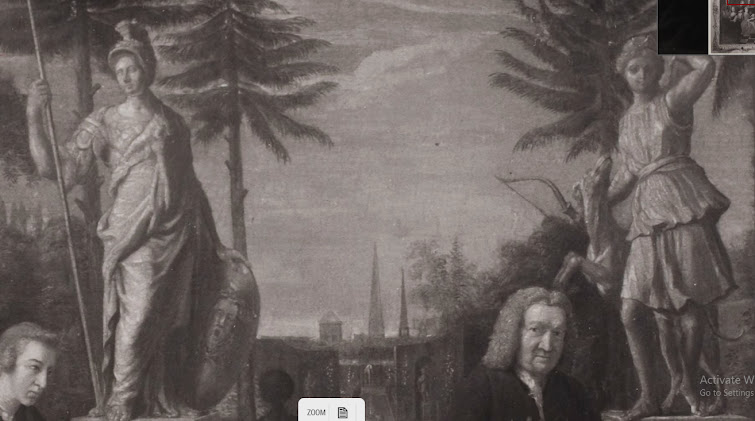 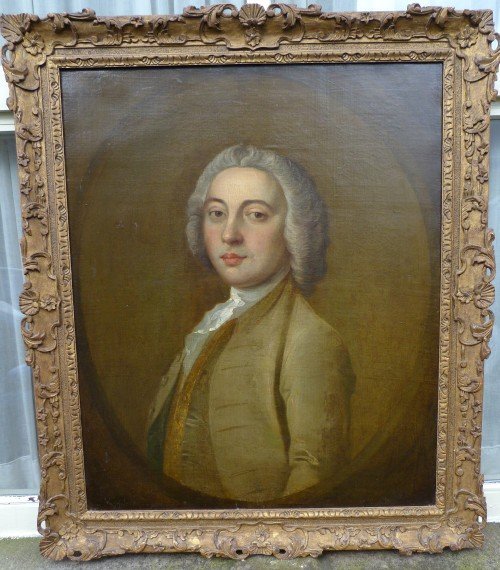 Samuel Tufnell II ( d.1796).
From the website of dealer Roy Precious
https://www.royprecious.co.uk/
"It has been suggested by a member of the family that this may not be Samuel Tufnell, but his grandson, also called Samuel Tufnell, who married the daughter of Wilmot-Horton" Roy Precious.
Given the clothing and wig and age I tend to agree.

"At Great Waltham in the centre of Essex is the mellow brick mansion of Langleys where, over the dining room fireplace hangs the portrait of a grave-faced boy in a red coat. Two miles away, at Pleshey - a place known to all readers of Shakespeare - is a massive marble monument with the bust of an old man who died full of years and achievements.

The boy and the man are one. The portrait and the bust are both of Samuel Tufnell who bought Langleys and made it into the stately home we see today.

The portrait itself is a good, honest, no-nonsense image of the sitter...he looks directly and frankly at the viewer.

The unknown artist was clearly influenced by the work of Joseph Highmore (1692 – 1780), an artist very fashionable with the gentry at this time. 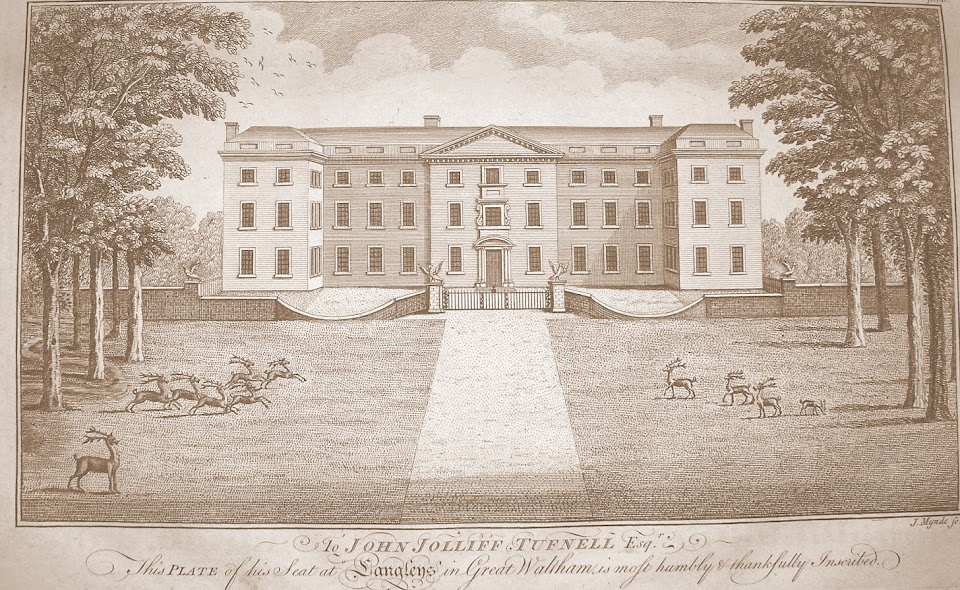 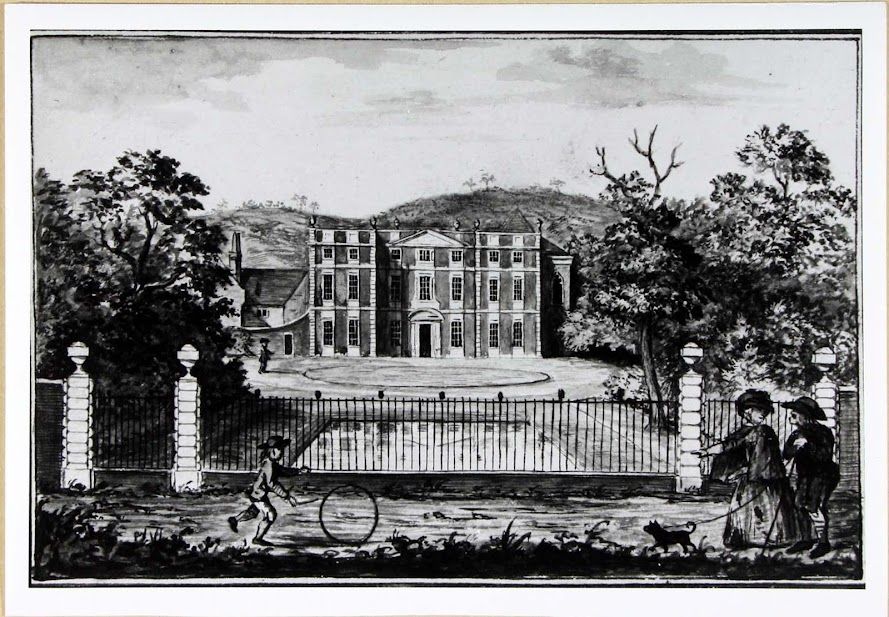 This late 18th century image of Langleys from Historic England Archive.
Posted by David Bridgwater at 02:23