From the contents of Newbold Pacey Hall, Warwickshire.

I was unable to inspect these statuettes at close quarters but the figure of Newton appears to be undamaged whilst Locke has lost most of his right hand holding a quill and an obvious large chip off the base - they have been painted black at some point and have the appearance of Wedgwood basalt ware.

They do not appear to be signed 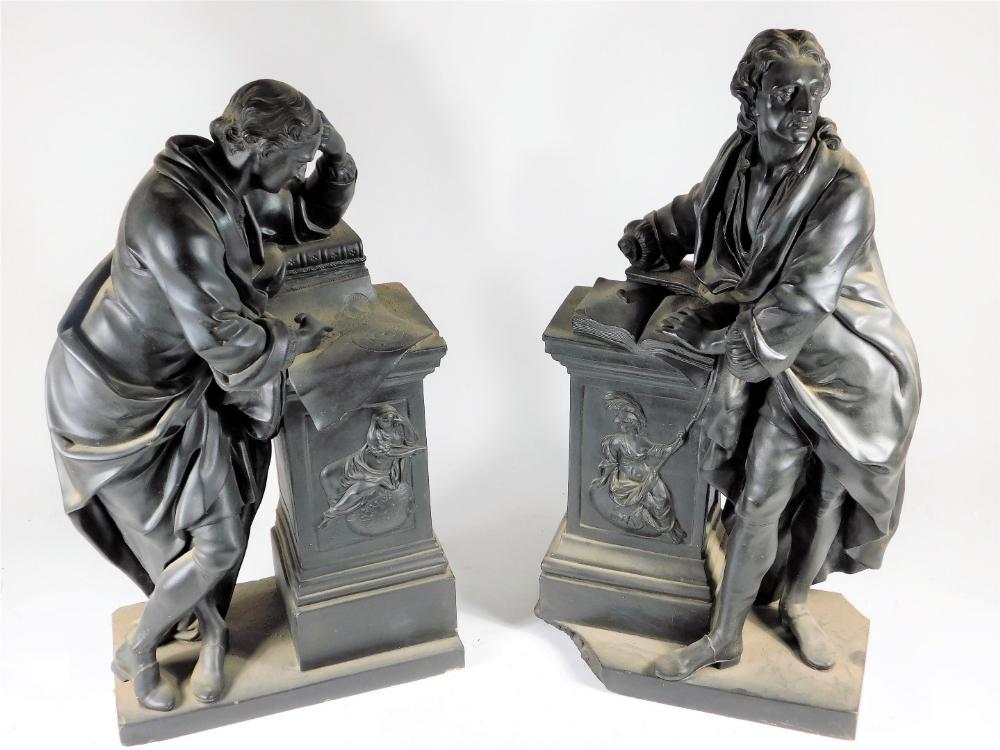 I asked them to send me better photographs in order to see the damage but given the estimate of £40 - £60 they obviously thought that it would be a waste of their time.

Normally I don't give the prices that objects make at auction, but in this case I will make an exception  -£7,500 + premium - no doubt they will see this as a success for them and their client! personally I think they should waive their commission to the seller as they failed to do their homework and should only recieve the commision on their original estimate.

Their commission to the buyer is a not inconsiderable 24% + VAT,

not bad considering how far they got it wrong.

Fortunately I am great friends with the purchaser and will be obtaining much better photographs in due course.

I have informed Art Detective and this should soon be rectified.

These statuettes (below) were originally supplied in 1749 to Chomley Turner d. 1757 for Kirkleatham Hall in Yorkshire along with busts of Matthew Prior (loosely based on the Coysevox bust on the monument in Westminster Abbey), John Dryden (after Peter Scheemakers), William Congreve, Joseph Addison, Sir Francis Bacon (after Roubiliac), Dr Samuel Clark, Dean Swift, Cicero and Horace, along with Statuettes of Rubens and van Dyck (after Rysbrack), Shakespeare (after Scheemakers), Homer, Spencer, Alexander Pope, Milton, Inigo Jones.

The Statuette of Locke at the York Art Gallery.

It is indistinctly signed on the base of the plinth Jn. Cheere Fect 1749. 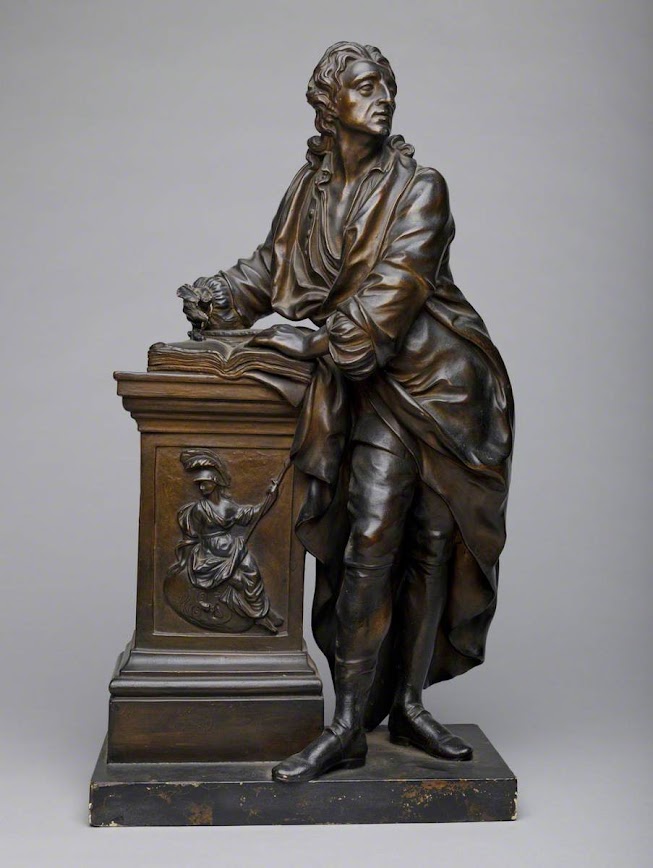 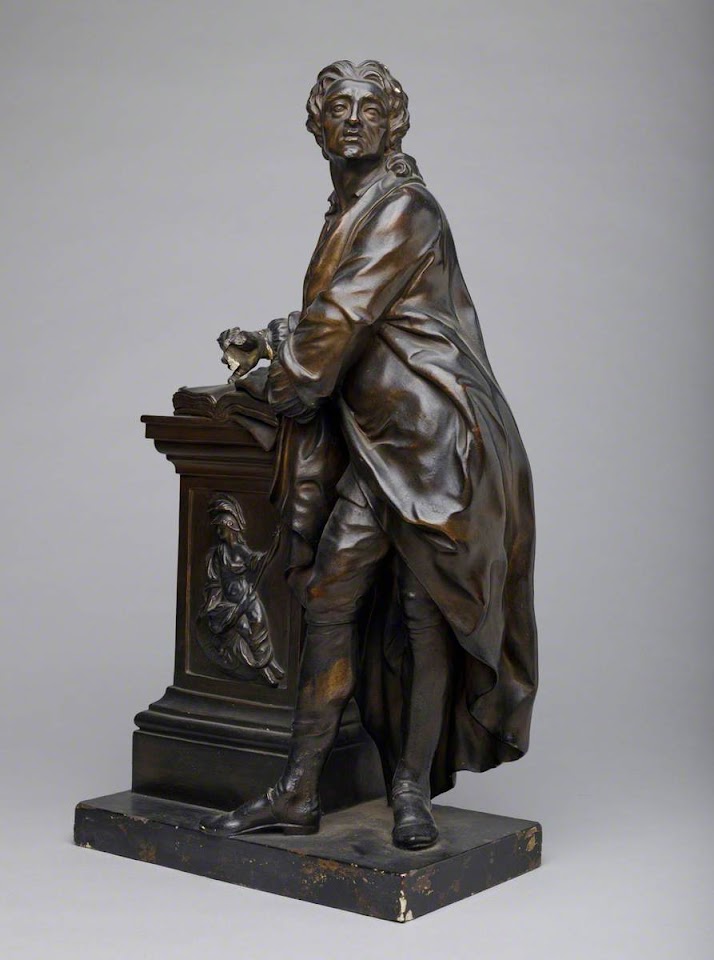 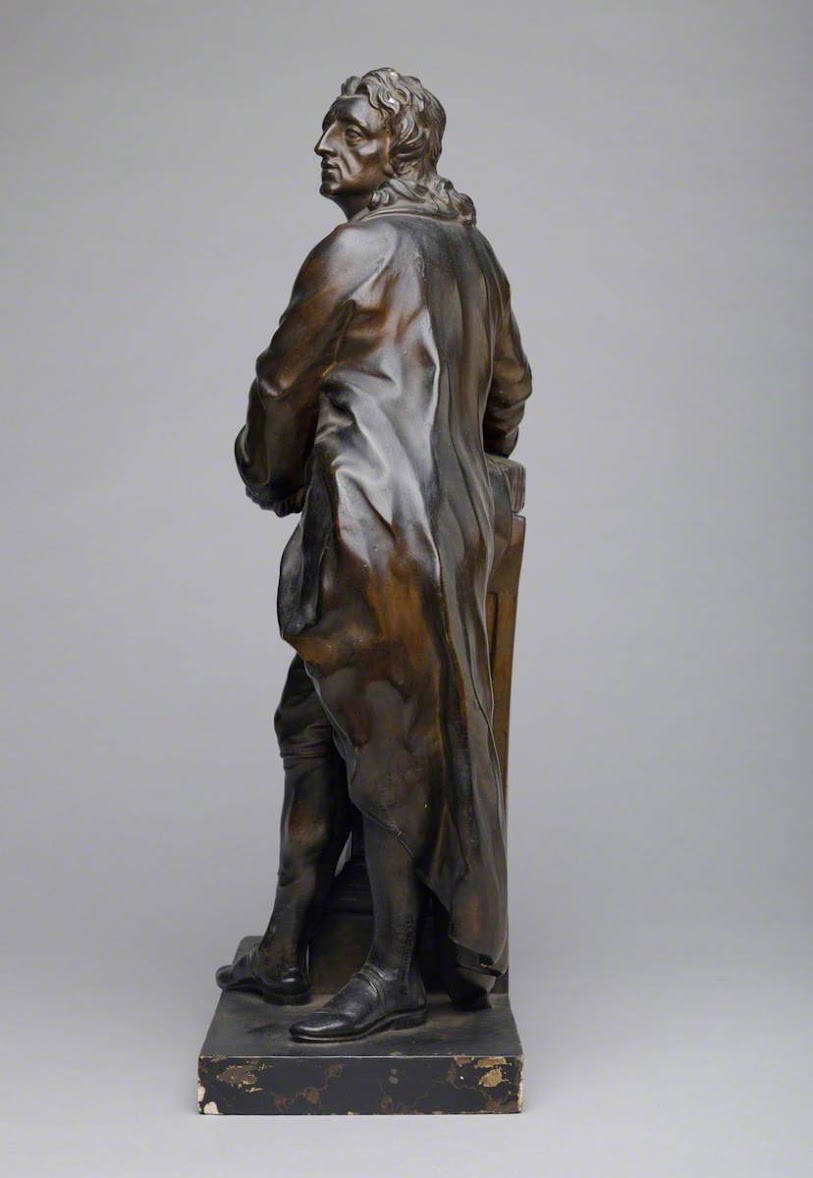 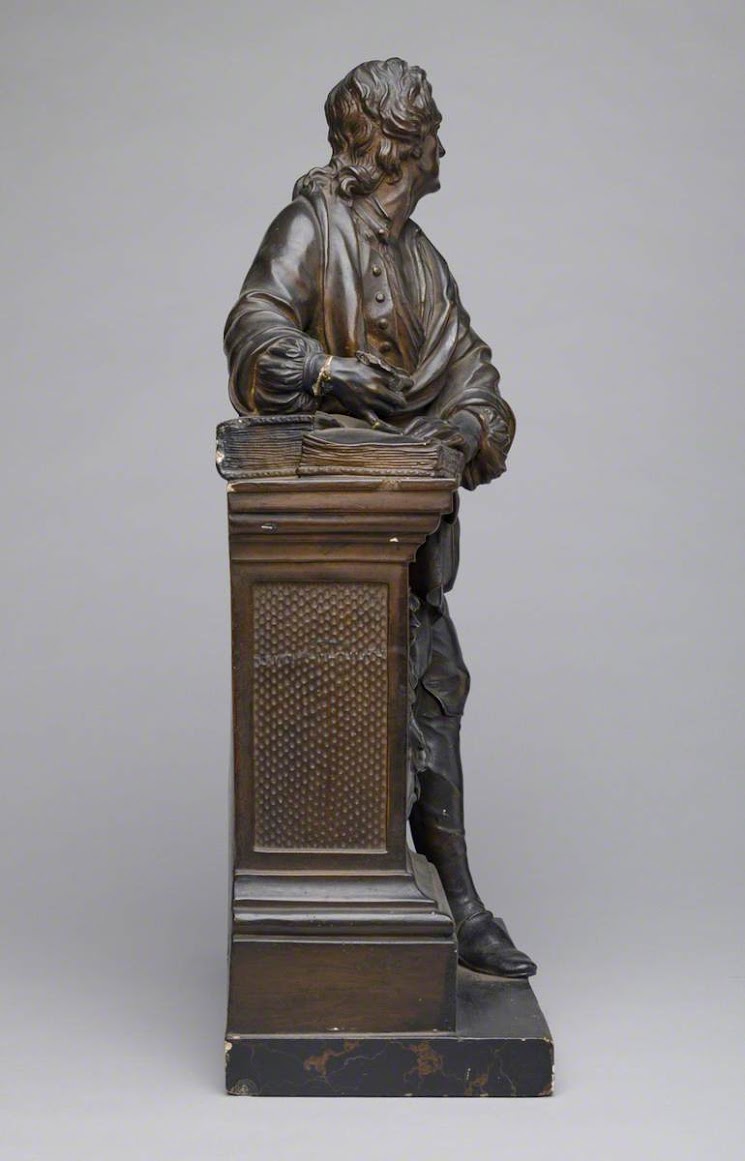 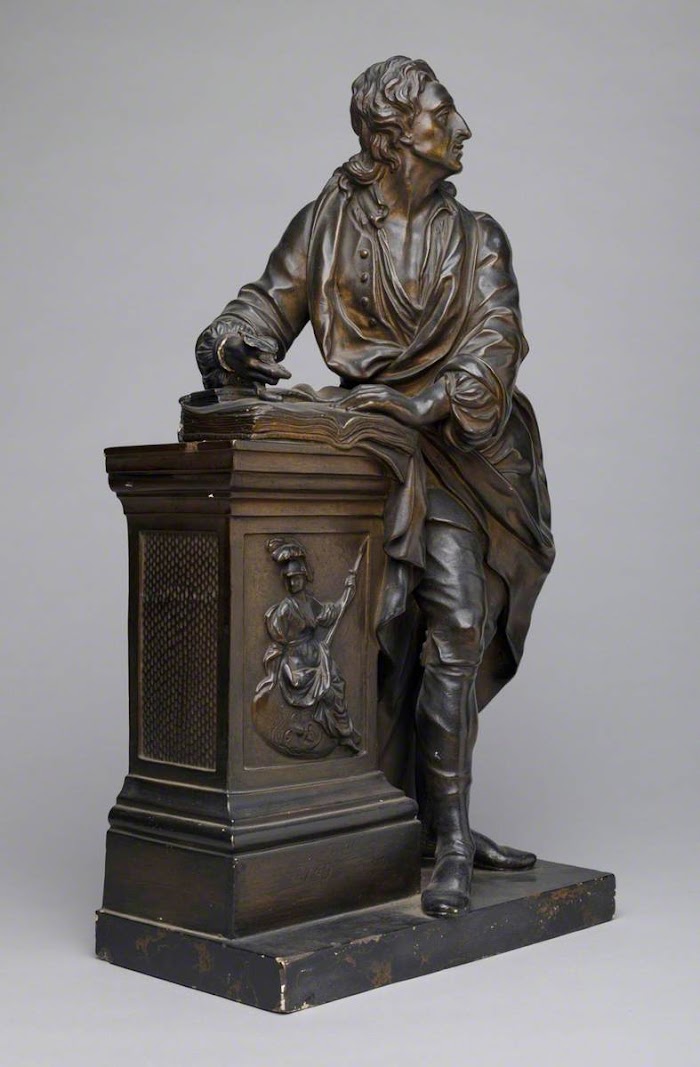 The Statuette of Isaac Newton 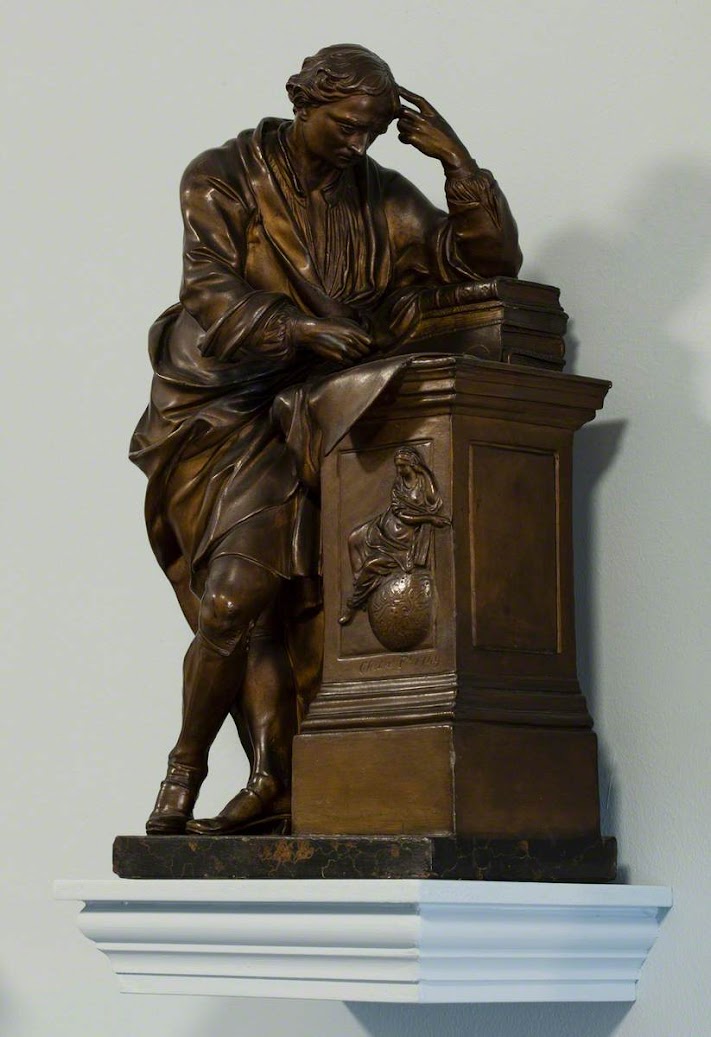 Signature is fairly obvious below the panel of the plinth.

A Lead statuette of John Locke

Another version in plaster was listed in a 1754 letter from the Cheere to John Grimston.

Available online at Jstor but I cannot quite bring myself to give them $39 for the privilige of reading it.

A quick trawl of  the online search at the National Archives  reveals that Cheere wrote to Grimston from Hyde Park Corner in 1754 in relation to the supply of statues. He also corresponded with Henry Cheere in 1752 probably with reference to wall monument .put up in the church of All Saints at Beswick.

The Grimston family of Grimston Garth and Kilnwick

Includes references to the Chimney peice having been put on board the London Cutter with W[illia]m Clapton Master for Hull, there being four Cases but the Monument not having been sent with it because the painter doing the Inscriptions (there being only one in town that he knows of) has been very ill 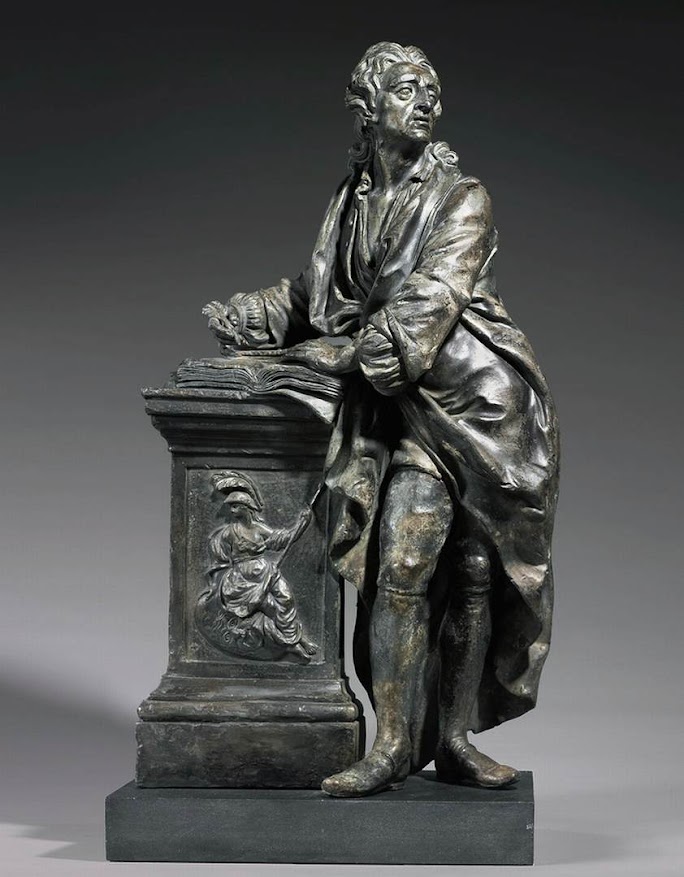 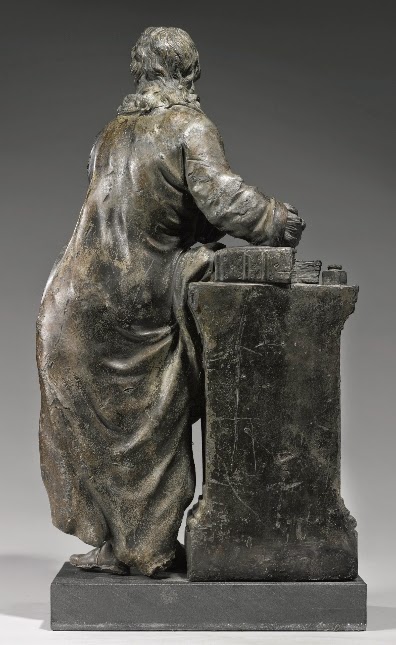 The detail on the spine of the book seen from the back suggests that the lead statue came from the same mould as the York plaster figure.

I will come back to this subject and the statuettes of John Cheere in due course.

see my blog entry for later 18th Century plaster casts of these and other figures by Parker and Harris of the Strand.

I will update this post on this blog shortly.

Posted by David Bridgwater at 05:18