A Terracotta Bust by Roubiliac.

in the Fizwilliam Museum, Cambridge.

These rather indifferent photographs below were recently added to the Art UK website.

It is a great shame that these photographs are so poor - hopefully next time I an in Cambridge I will be able to see and photograph this bust myself.

Currently their website is quite difficult to navigate to unless saved to favourites. 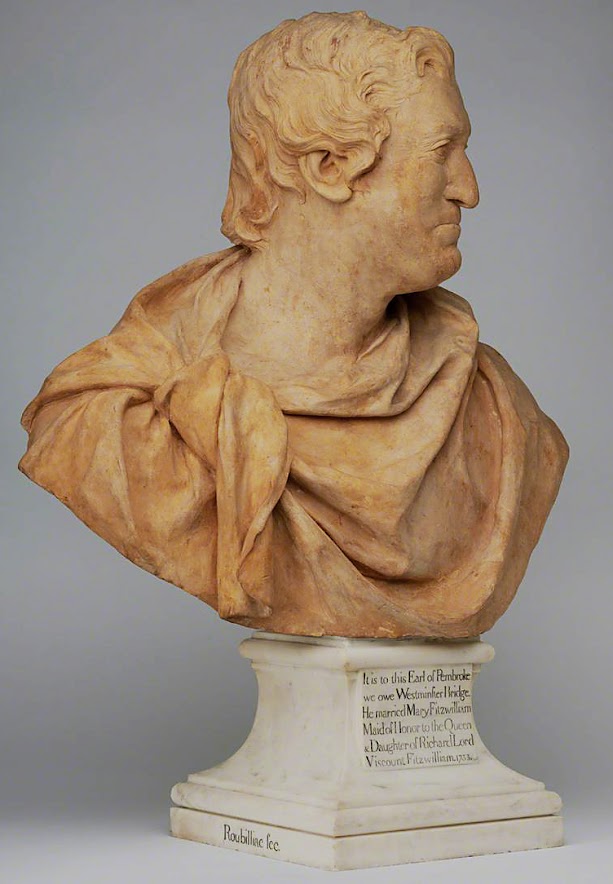 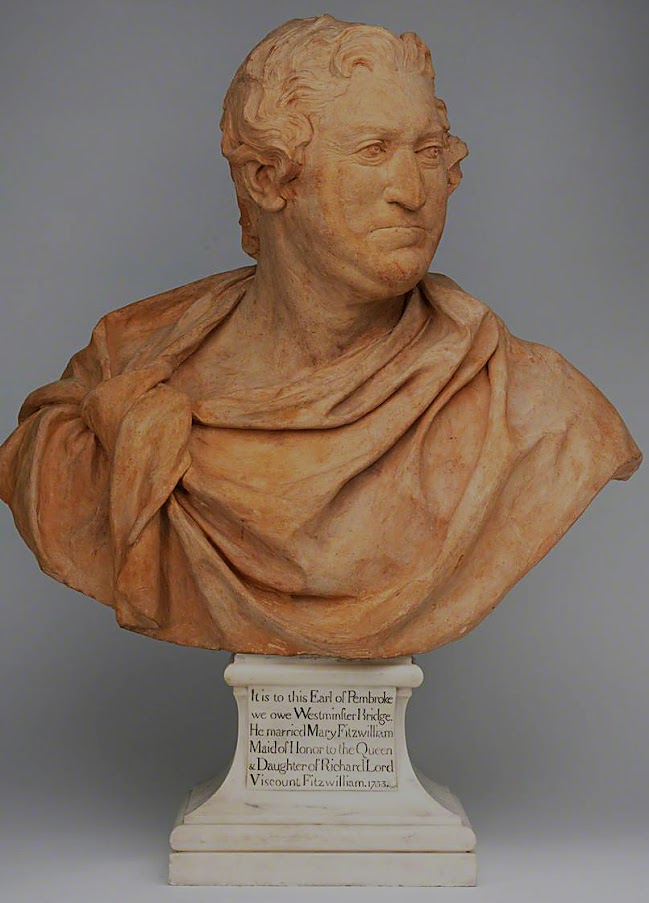 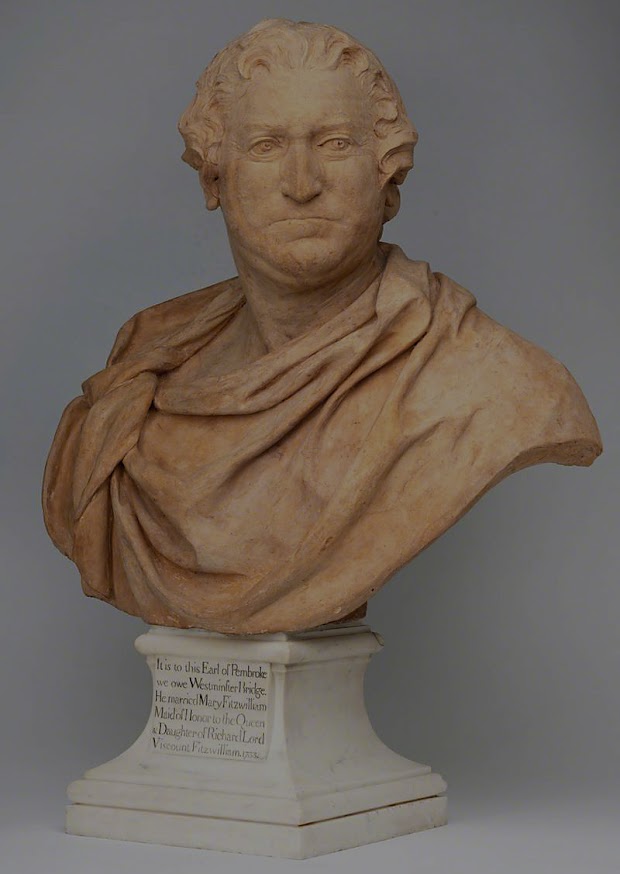 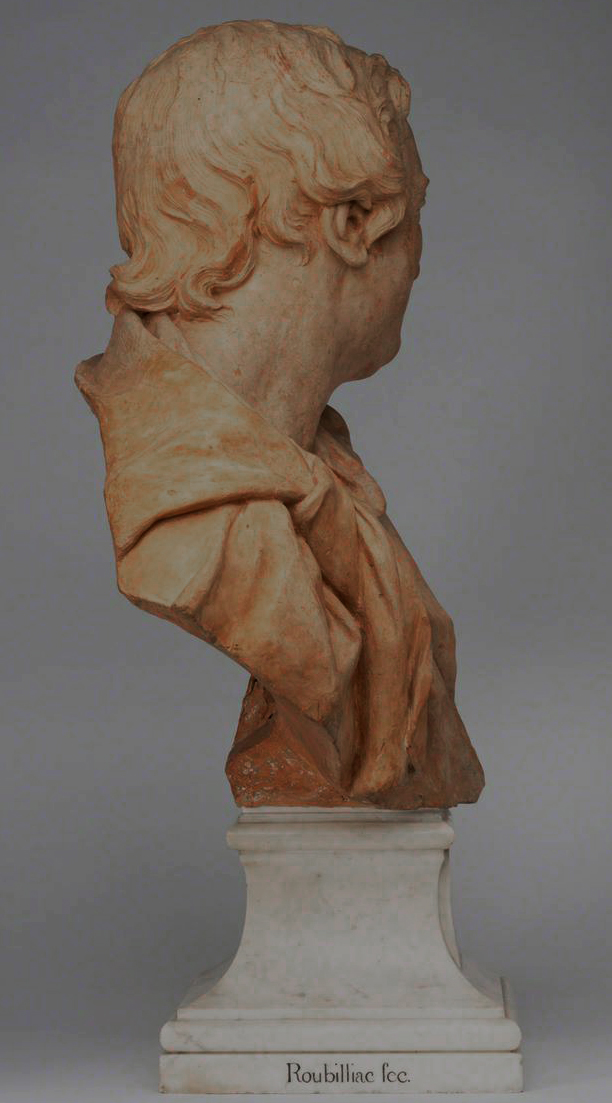 The socle is almost certainly a slightly later addition

nb the spelling of Roubiliac.

The 9th Earl of Pembroke married Mary Fitzwilliam in 1733 , sister of the 6th Viscount Fitzwilliam, whose heir, Richard, was the founder of the Fitzwilliam Museum.

In The Life and Works of François Roubiliac.London: Oxford University Esdaile, Katharine A.. 1928.Pressp. p. 91.  not to be entirely trusted.

Ref. p. 91, note 4, says the inscription 'Roubilliac [sic] fec' is modern. 'The model passed first to the Countess's family, then to Cambridge along with the Hercules (pl: XIII b and now atrributed to Rysbrack R.A.B.) and the antique head of Agrippina with a pedestal by Roubiliac (Arnold's Library of the Fine Arts iv, 183, p. 1840).'

The marble bust, for which this was the model, and that of the Countess are at Wilton in the church; there is another of Lord Pembroke in Wilton House, and one at the Birmingham City Museum  and Art Gallery.?? 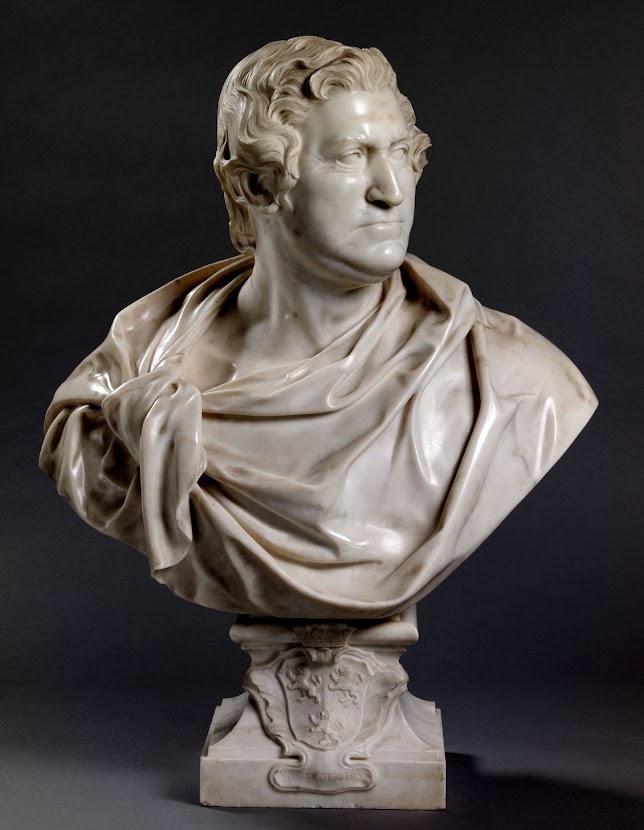 Depicted facing to sinister; on an integral square marble socle carved with the Pembroke coat of arms and inscribed ‘VNG. GP. SERVERAY’.

Henry Herbert, 9th Earl of Pembroke, by descent to his son

Placed on the monument to the 9th Earl of Pembroke in St. Mary’s Church, Wilton, Wiltshire, before 3 July, 1754 (when seen by Dr. Richard Pococke)

The bust and parts of the monument moved to the new Church of St. Mary and St. Nicholas, Wilton, Wiltshire in 1845;

This bust was exhibited at the Victoria and Albert Museum, London, in the Sculpture in Britain Galleries since 2005.

Sold by dealers Lullo - Pampoulides to a private collector, USA.

Three versions of the present bust are known. The other two, one of which is paired by a bust of the Earl's wife, Mary, the eldest daugher of Richard, Viscount Fitzwilliam, are at Wilton House. Although none is signed, their attribution to Roubiliac has not been doubted since they were first discussed by Mrs. Esdaile in her monograph on the sculptor, where she also referred to a terracotta model of the bust of the Earl in the Fitzwilliam Museum, Cambridge, bearing a modern inscription, 'Roubilliac [sic] fec.' (Esdaile, loc. cit.).

More recently, archival research has revealed that Roubiliac received £165 and a halfpenny in 1751 from the executors of the 9th Earl for his monument, of which the present bust formed a part (Bindman and Baker, loc. cit.).

It would appear, however, that the bust may not originally have been intended for the monument, but was more probably an independent portrait subsequently enlisted for the task. It was, in any event, certainly in place as early as 3 July 1754, when it was described by Richard Pococke as having the form of 'a marble bust as against a pyramid' (Pococke, loc. cit.).

The original form of the monument was considerably modified when it was transferred from the chancel of the old medieval church at Wilton in 1845 to its present location in the new church.

The bust has now been replaced by a replica.

Here are some snaps of this bust taken by the author at the Victoria and Albert Museum.

It is my guess that this bust might have spent some time outdoors and has suffered some weathering. 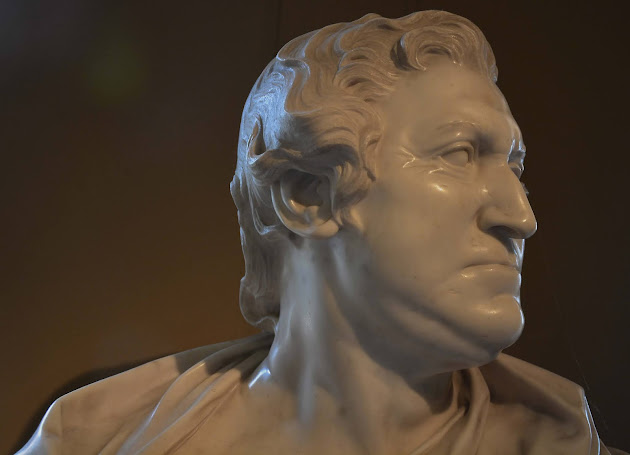 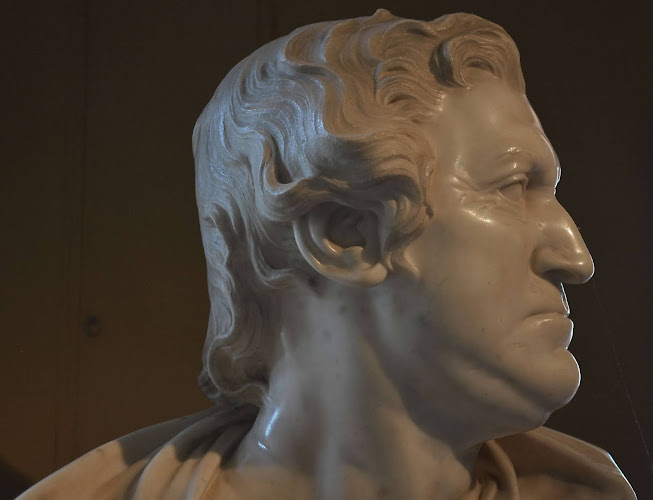 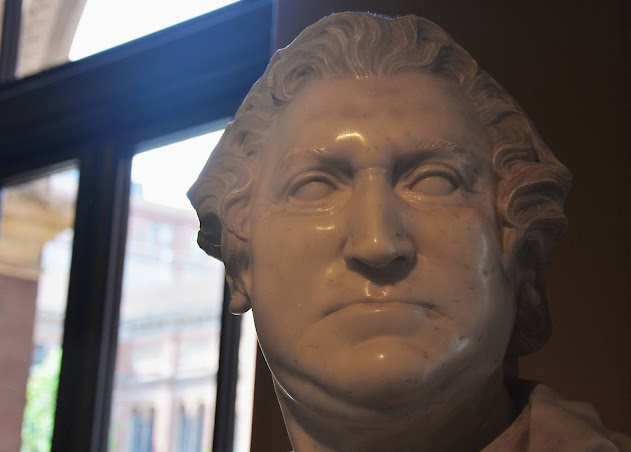 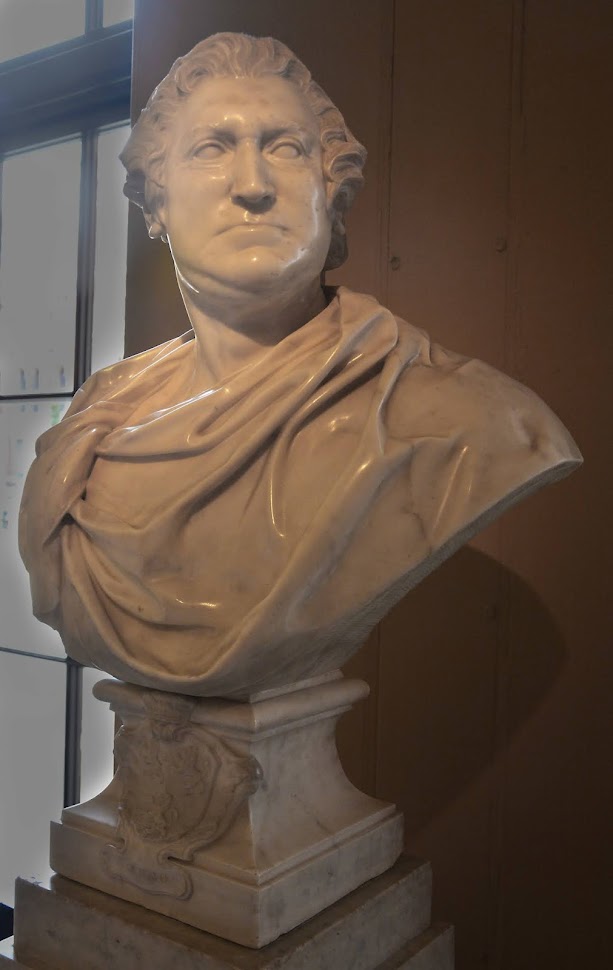 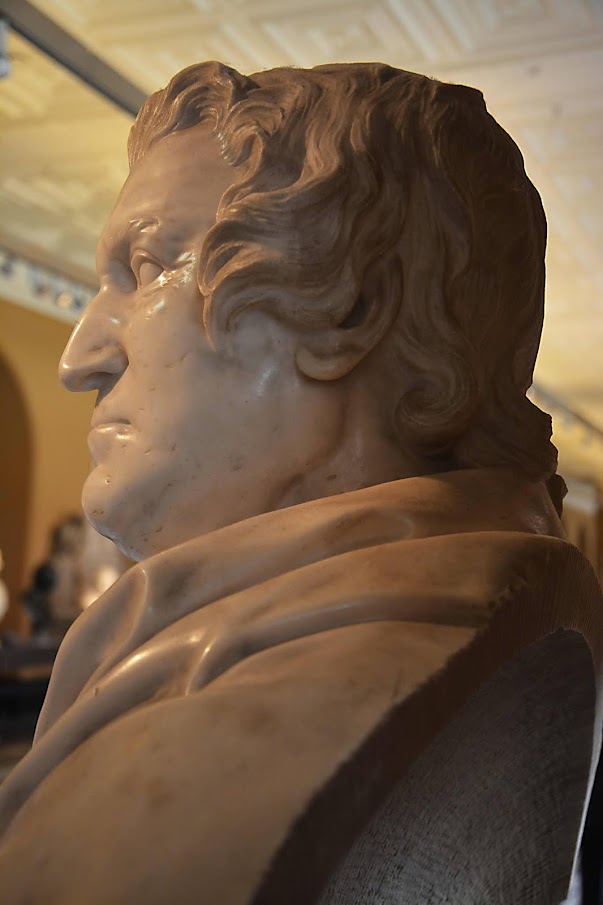 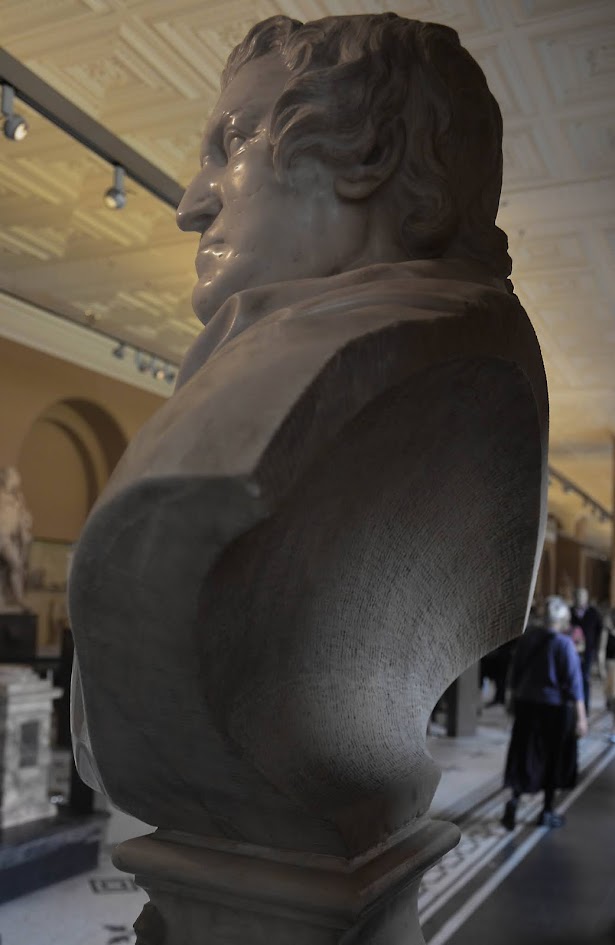 For this marble bust of Pembroke by Roubiliac formerly on the monument in the church of St Mary and St Nicholas at Wilton sold at Christies lot 83 2nd December 1997. 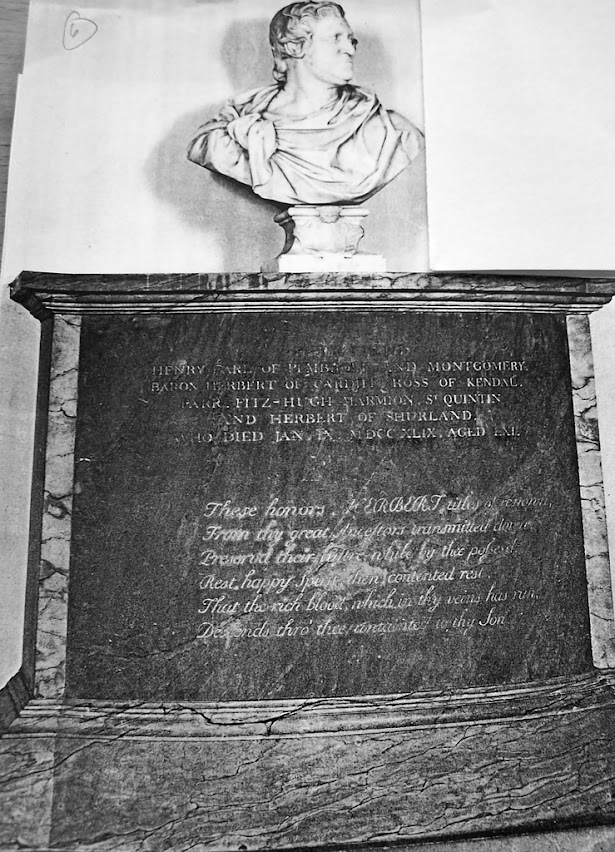 There was originally a marble pyramid and urn on the monument at one time which has since disappeared - probably when the medieval church was remodelled in 1845. It was perhaps at this period that it spent some time outdoors.

The Bust of the 9th Earl of Pembroke at Wilton House

and Mary Fitzwilliam Countess of Pembroke 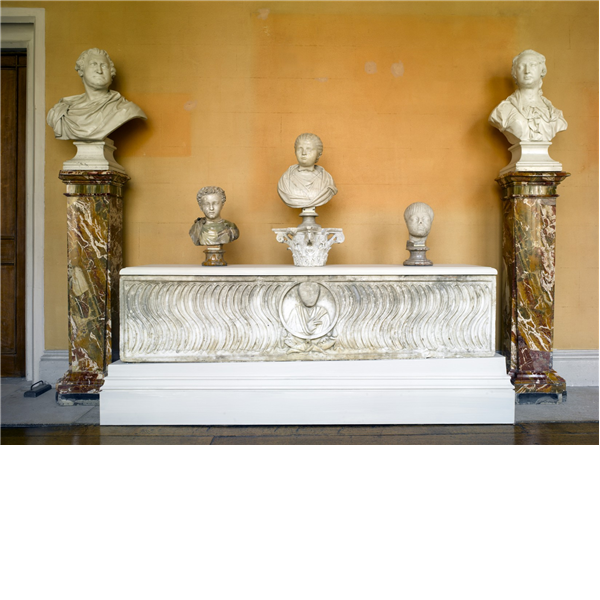 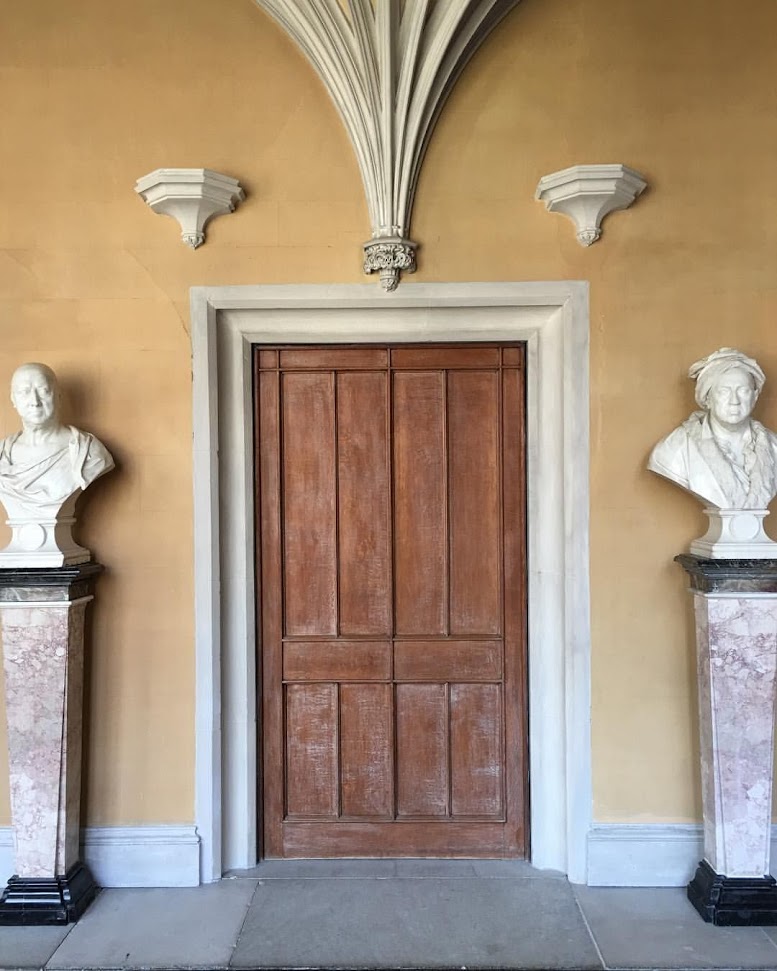 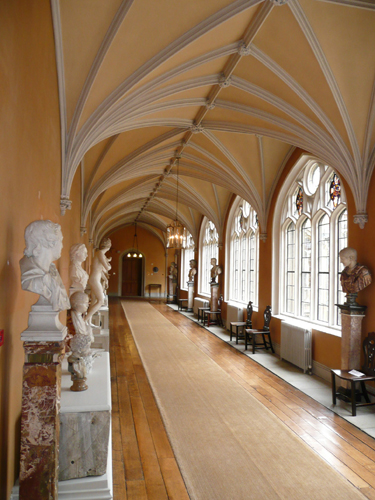 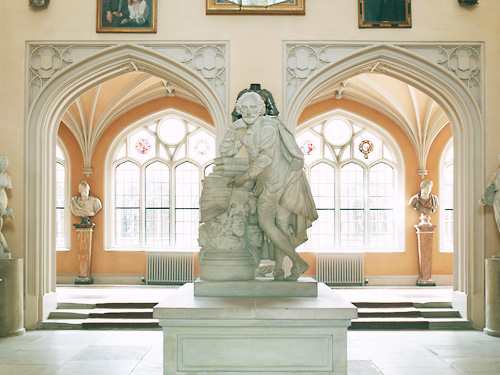 William Shakespeare
Portland stone
Scheemakers
All being well I will be visiting Wilton House shortly to obtain my own photographs of the portrait sculpture.
see my blog post.
http://bathartandarchitecture.blogspot.com/2016/01/the-rysbrack-statuettes-of-rubens-van.html 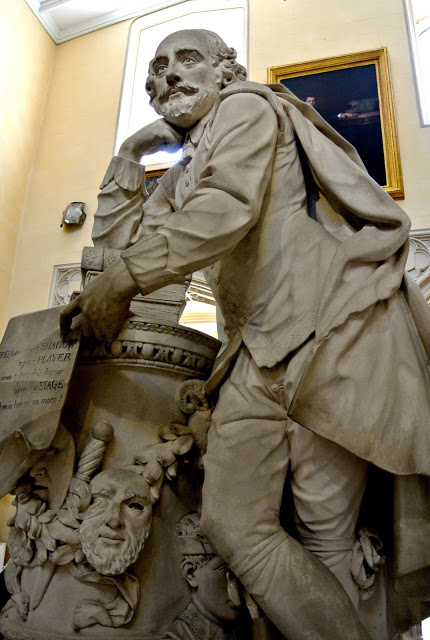 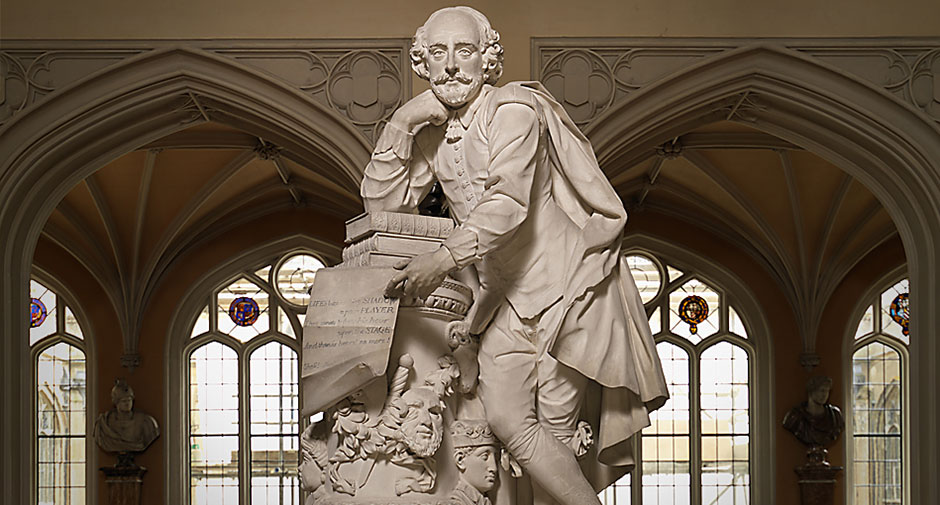 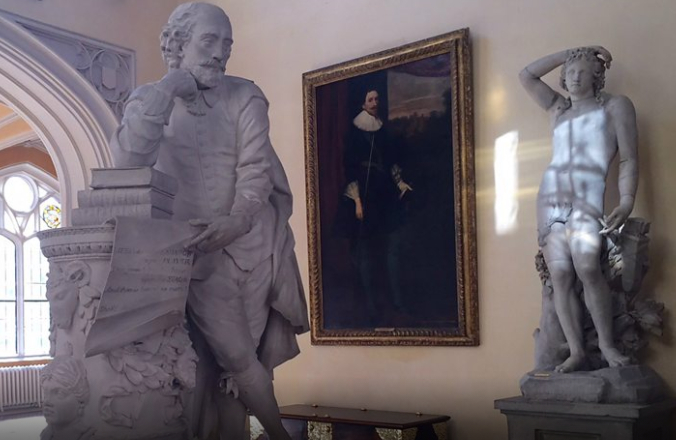 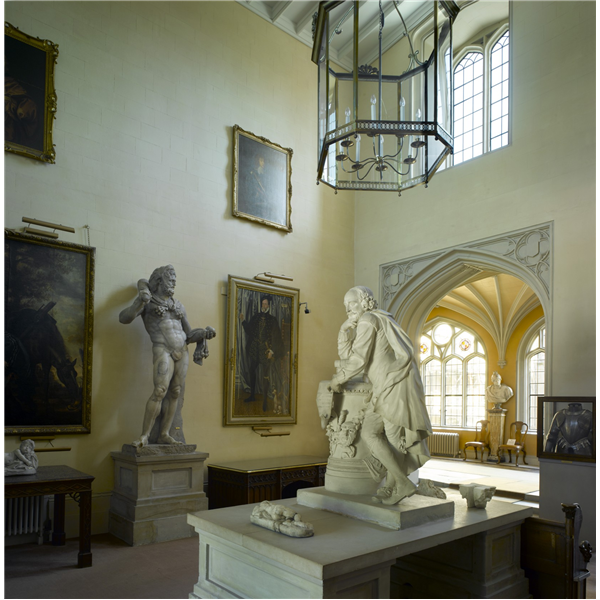