Busts of Leland and Linacre at All Souls Oxford

The Plaster and Terracotta Busts of Leland and Linaker/Linacre originally in the Hall at All Souls College, Oxford University.

The plaster bust (one of 23) of Linacre on the bookcases in the former Codrington Library supplied by John Cheere in 1750.

The second and far superior terracotta bust of Linacre here suggested as sculpted by Roubiliac.

and the missing bust of Leland seen in the engravings (below) also suggested as by Roubiliac.

It had recently come to my attention via the Art UK website that I had missed the bust of Thomas Linacre at All Souls when I visited in order to photograph the 23 Cheere busts in the Codrington Library, and the busts of Archbishop Chichele and Nicholas Hawksmore by Roubiliac, annoyingly neither the existence of the second and far superior bust of Linacre, the plaster bust of Chichele or that of Giles Bennett had been pointed out to me - had I been aware I would have taken photographs of these busts myself.

This bust of Linacre was not in the library at the time of my visit - I also missed the bust of Giles Bennett and Nicolas Hawksmoor which are still in the Buttery at all Souls.

I am very grateful to Gaye Morgan, Librarian at All Souls for her help in putting together this essay and others on the portrait sculpture at All Souls.

and the individual posts for each of the 24 busts and the matching set of urns.

In 1750, twenty-five bronze vases and twenty-four bronze 'bustoes' of college worthies were ordered from Cheere to decorate the top of the shelves.

Versions of these urns/vases are at Lydiard House, nr Swindon along with a group of classical plaster busts supplied by John Cheere. 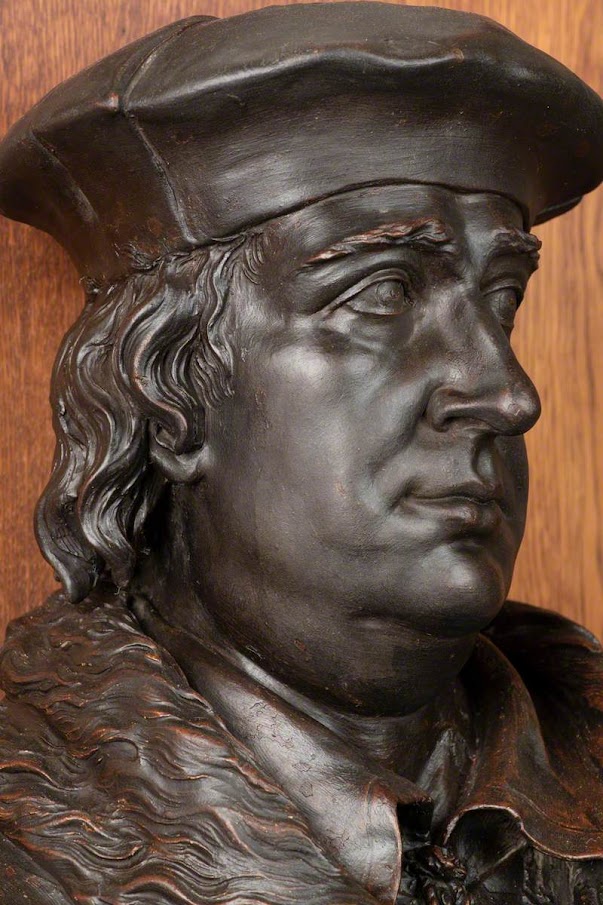 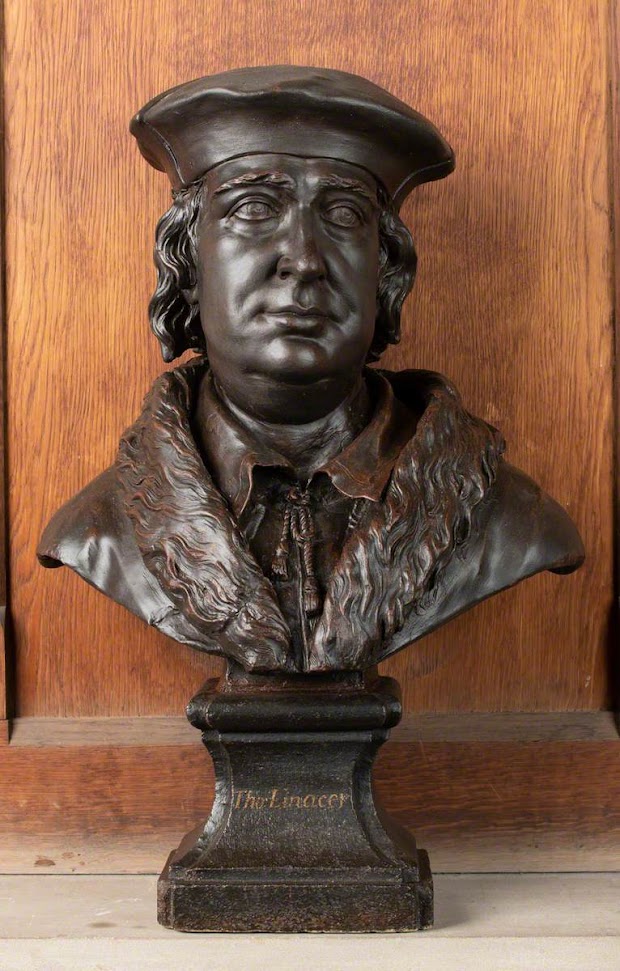 It has been suggested (in wikipeadia) that these two busts are by Roubiliac and certainly the quality of the bust of Linacre could point to him as creator.

Certainly put up prior to 1767 and given that the plaster bust of Linacre by John Cheere which is an inferior version of this bust was put up in 1750 - I would suggest that it was sculpted pre 1750.

Photographs above  credited to All Souls College Oxford,

Thomas Linacre was a Fellow of All Souls from 1484 until 1493. He became the first President of the College of Physicians founding lectureships in medicine at both Oxford and Cambridge.

This historical bust was originally in the Hall with a corresponding bust of the Antiquarian John Leland, now missing, an engraving of which was published in W. Huddersford's 'Life of Leland' in 1772. Another portrait bust of Linacre by John Cheere is amongst the twenty-three in the Codrington Library.

These busts of Linacre and Leland are mentioned as being in the hall on the chimneypiece flanking the bust of Chichele by Roubiliac in The English Connoisseur: Containing an Account of Whatever is Curious in Painting Sculpture etc ...By Thomas Martyn published 1767. Volume II page 29 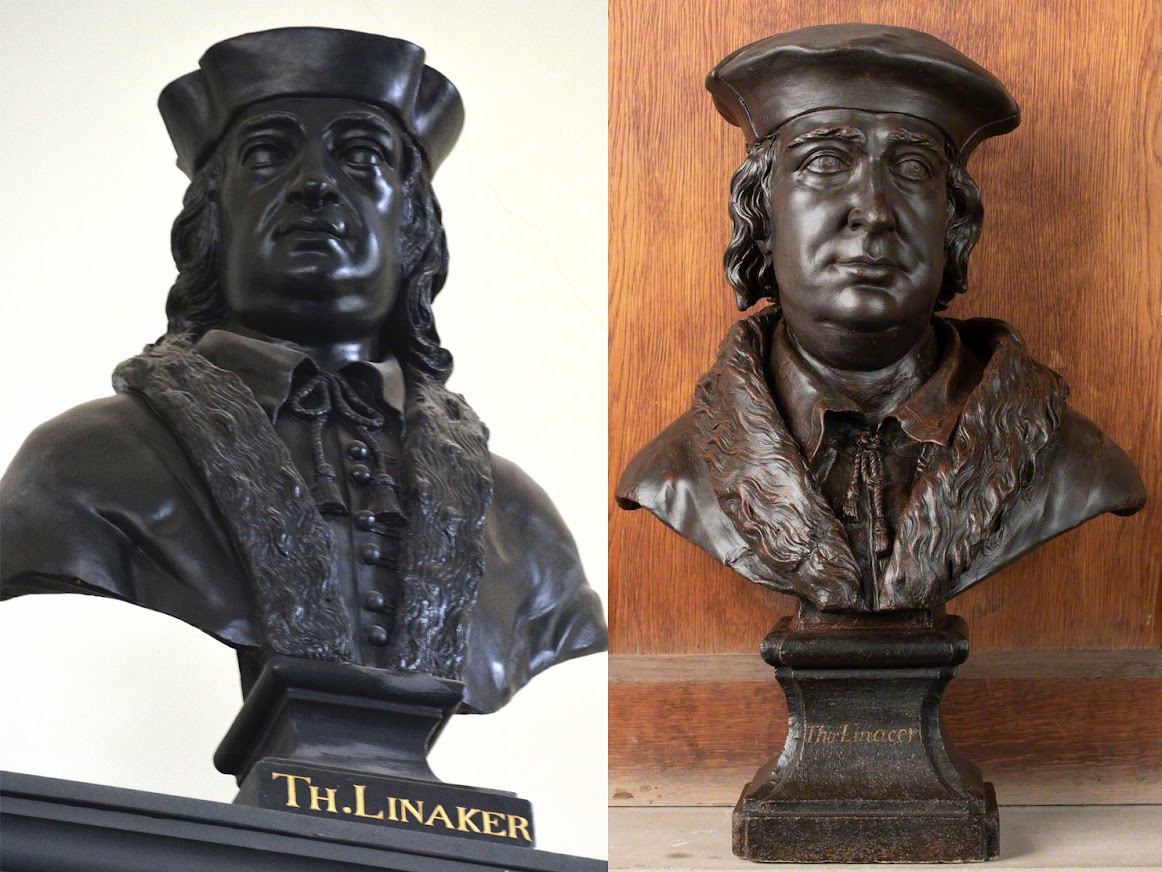 The Plaster Busts of Linacre

in what was until recently called the Codrington Library, All Souls College Oxford.

One of a set of twenty three plaster busts of Fellows of the College which were commissioned from John Cheere and put up in 1750 at the cost of £195 15s following the order and selection of Sir William Blackstone. A few of them are based on contemporary portraits. 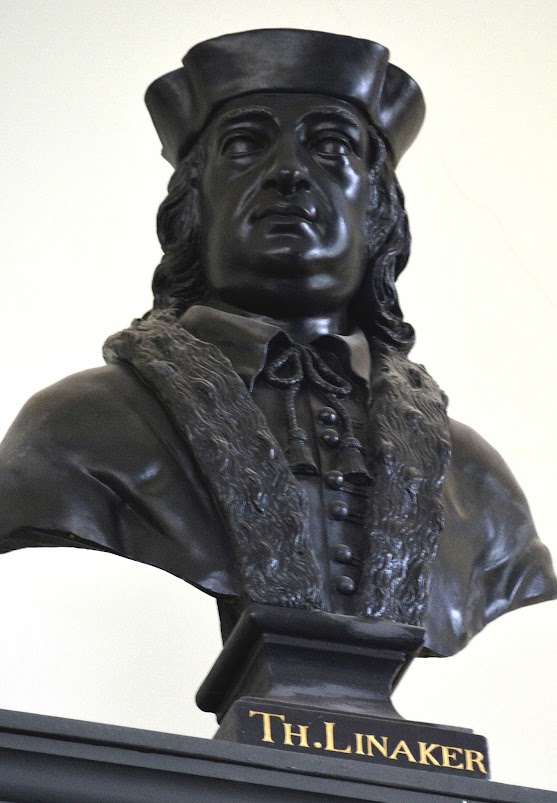 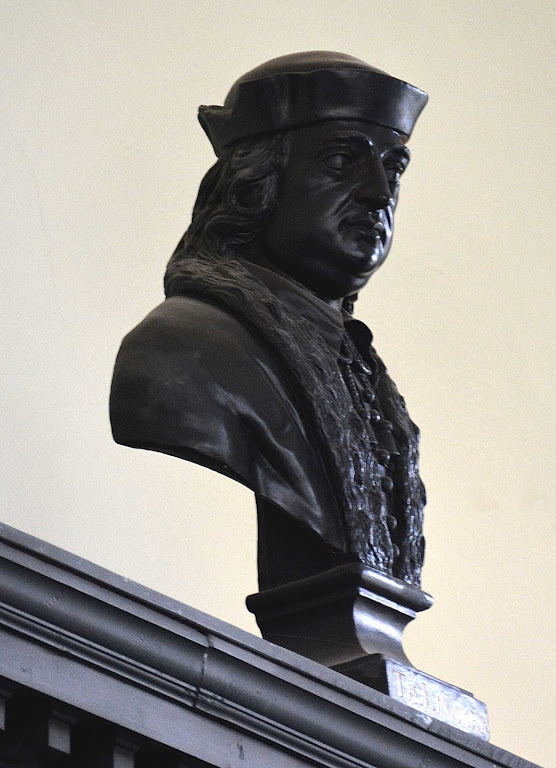 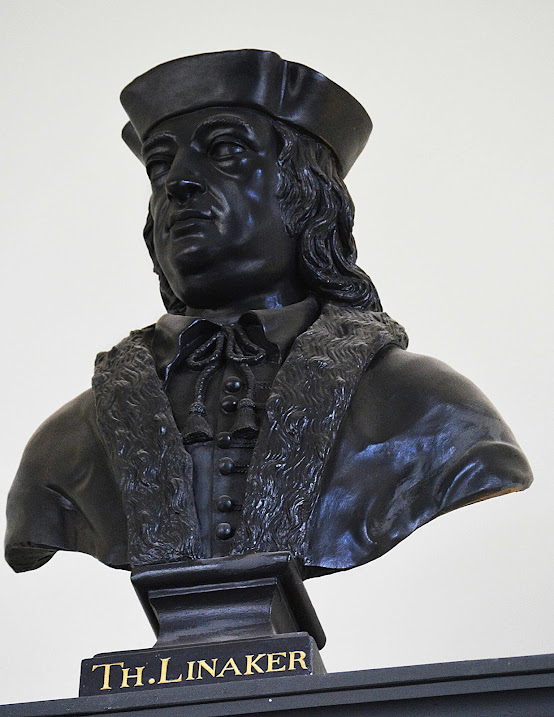 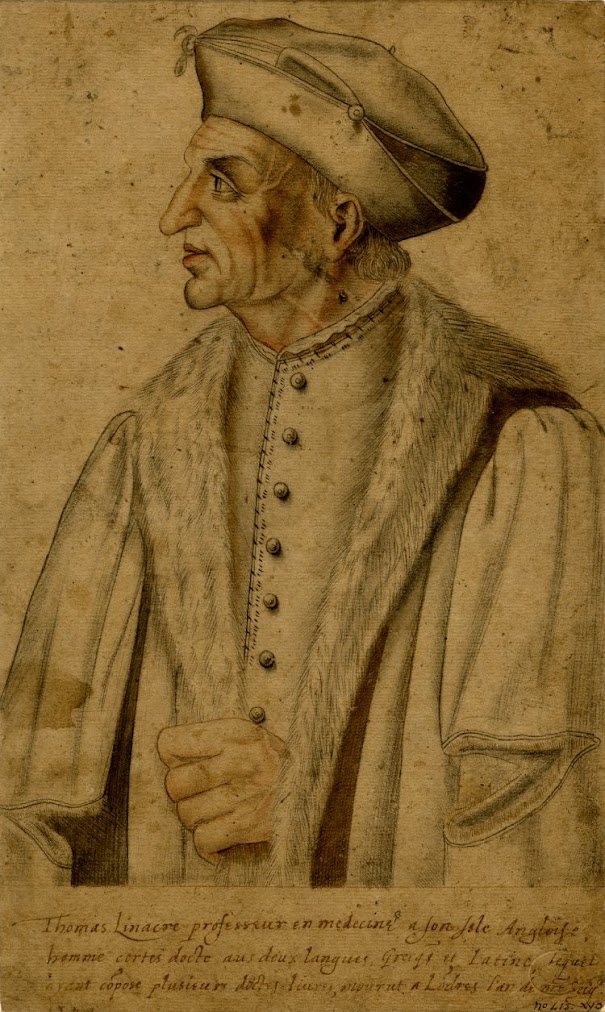 Black chalk, graphite, with highlights and red chalk on face and hands

Annotated in pen in brown ink below drawing -

D. Lincoln in letter of Oct. 28, 1949 suggests that this drawing is by the same hand as the original studies for the engravings in Theret's 'Hommes Illustre' 1584, which are in an interleaved copy of the work in the Bibliotheque Nationale".

Bequeathed to the BM by: Clayton Mordaunt Cracherode (on verso in ink Cracherode's monogram and date 1778). 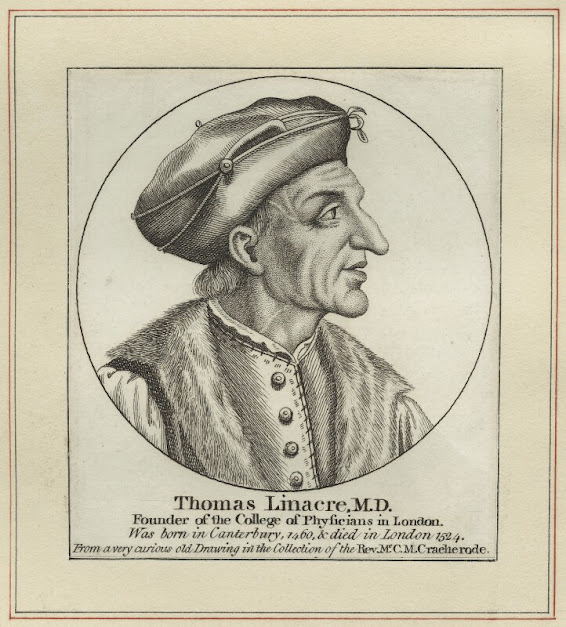 Etching pub 1794 of the Cracherode drawing above 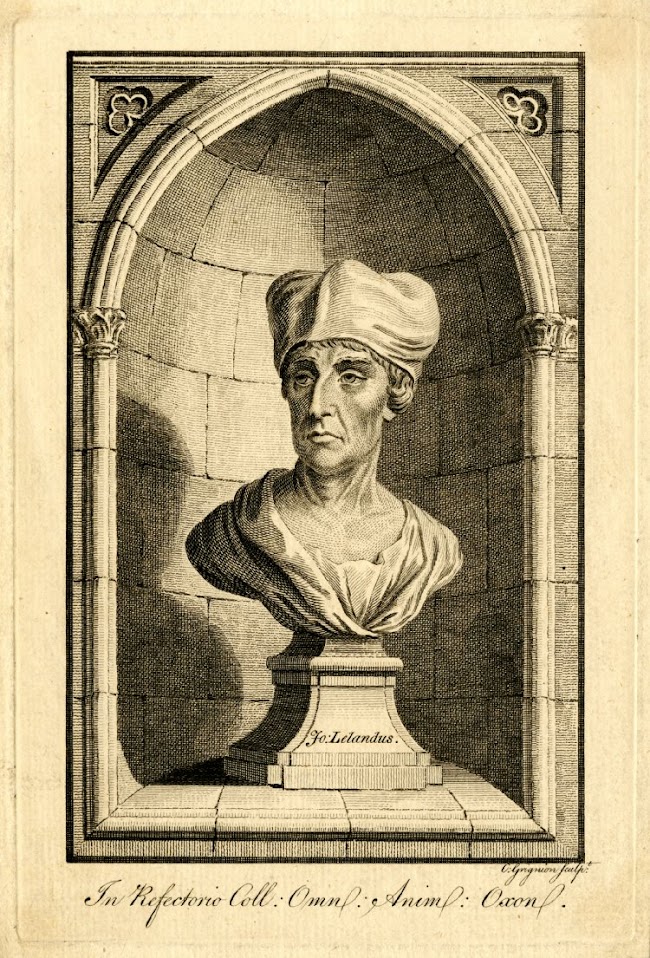 in the Refectory at All Souls

The conformation of the Socle should be noted

(as that on the bust of Linacre). 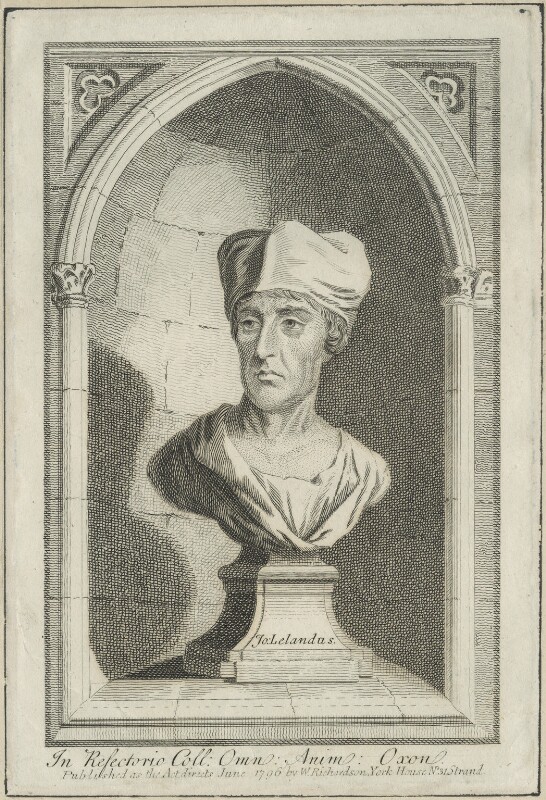 See my previous post for an in depth look at the Codrington Library Statuary at All Souls College Oxford University: 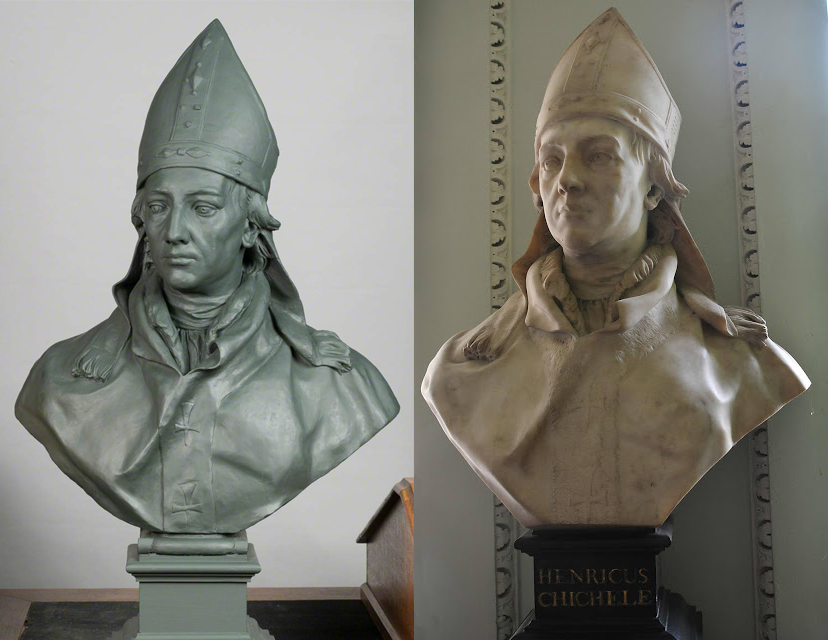 The grey painted version might well have been subject to some damage which would explain the thick overpainting.

At first glance the appear to be the same but close inspection reveals some differences.

Roubiliac's masterful depiction of the fur on the dress of the marble is missing on the plaster. 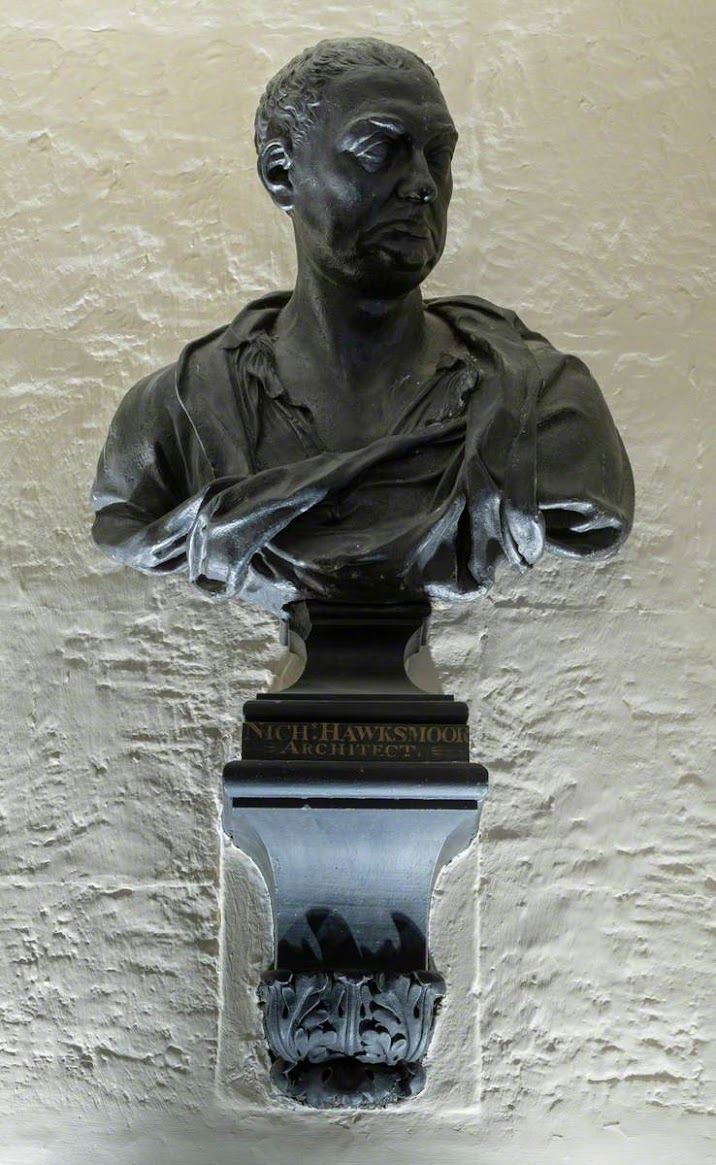 The architect Nicholas Hawksmoor was apprenticed to Christopher Wren and was employed in the construction of the Chelsea Hospital between 1687 and 1689, St Paul's from 1691 to 1712 and at the Greenwich Hospital in 1705.

For the last fifteen years of his life he was responsible for the designs for the redevelopment of All Souls and was the architect of the formerlay called Codrington Library, the Buttery, the North Quadrangle and the Hall, all built between 1716 and 1740.This bust is the only known likeness of Hawksmoor. The  bronze cast  was given by the Warden and Fellows of All Souls in 1962 to the National Portrait Gallery in London.

Posted by David Bridgwater at 07:33