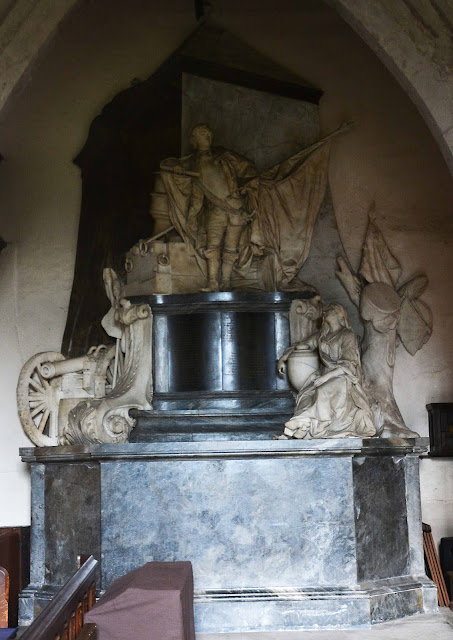 TO THE MEMORY/ OF RICHARD BOYLE LORD VISCOUNT SHANNON/ VOLUNTEER, WHEN A YOUTH/ AT THE GLORIOUS BATTLE OF THE BOYNE/ BY HIS PERSONAL BRAVERY/ DISTINGUISHED AT THE BATTLE OF LANDEN:/ IN THE FIRST YEARS OF QUEEN ANNE, COLONEL OF PRINCE GEO: OF DENMARK'S REGIMT OF MARINES/ AND AT THE MEMORABLE ATTACK OF VIGO IN 1702, BEING APPOINTED TO COMMAND ON SHORE/ HE RENDER'D HIMSELF CONSPICUOUS/ BY REPULSING A SUPERIOR BODY OF THE ENEMY'S TROOPS,/ AND FORCING THEIR OUT-WORKS AT THE HEAD OF THE GRENADIERS/ BY EMULATION EXCITED BY A SOLDIER/ BY EXPERIENCE MATURED INTO A COMMANDER;/ HIS BIRTH ADDING LUSTRE TO HIS PRETENSIONS;/ HIS PRETENSIONS AUTHORIZ'D HIS MERIT;/ PROMOTED SWIFTLY, NOT UNDESERVEDLY/ TO THE COMMAND OF VARIOUS CORPS/ OF FOOT, HORSE AND HORSE GUARDS/ AND TO THE SUCCESSIVE RANKS OF GENERAL OFFICER/ DURING A LONG AND CONTINUED PEACE/ HE ATTAIN'D/ BY ROYAL REGARD AND JUST FAVOUR,/ WHAT HE WAS AMBITIOUS TO ACHIEVE BY SERVICE:/ (RIGHT SIDE): AND HAVING DISCHARG'D A VARIETY OF COMMANDS AS A SOLDIER/ HIS DUTY AS A BRITISH SENATOR,/ AND AS ONE OF THE LORDS JUSTICES OF IRELAND/ WITH EQUAL ZEAL FOR THE HONOUR OF THE CROWN/ AND FOR THE WELFARE OF HIS COUNTRY/ DY'D UNIVERSALLY BELOV'D AND ESTEEMED/ CAPTAIN AND COMMANDER IN CHIEF,/ OF HIS MAJESTY'S HORSE AND GRENADIER GUARDS/ GENERALISSIMO OF HIS MAJESTY'S FORCES IN IRELAND/ AND FIELD MARSHAL OF ALL HIS MAJESTY'S FORCES/ OBIIT DECEMBER 1740. ETAT 65 (LOWER LEFT): THIS MONUMENT/ WAS ERECTED BY HIS ONLY DAUGHTER/ GRACE COUNTESS OF MIDDLESEX/ (JUSTLY SENSIBLE OF THE INEXPRESSIBLE LOSS/ OF HER RESPECTABLE PARENTS)/ IN OBEDIENCE TO THE WILL OF HER MOTHER/ GRACE, DAUGHTER & CO-HEIRESS/ OF JOHN SENHOUSE OF NETHERHALL/ IN THE COUNTY OF CUMBERLAND ESQ./ WHOSE ASHES TOGETHER WITH THOSE OF HER BELOV'D LORD/ ARE HERE DEPOSITED. 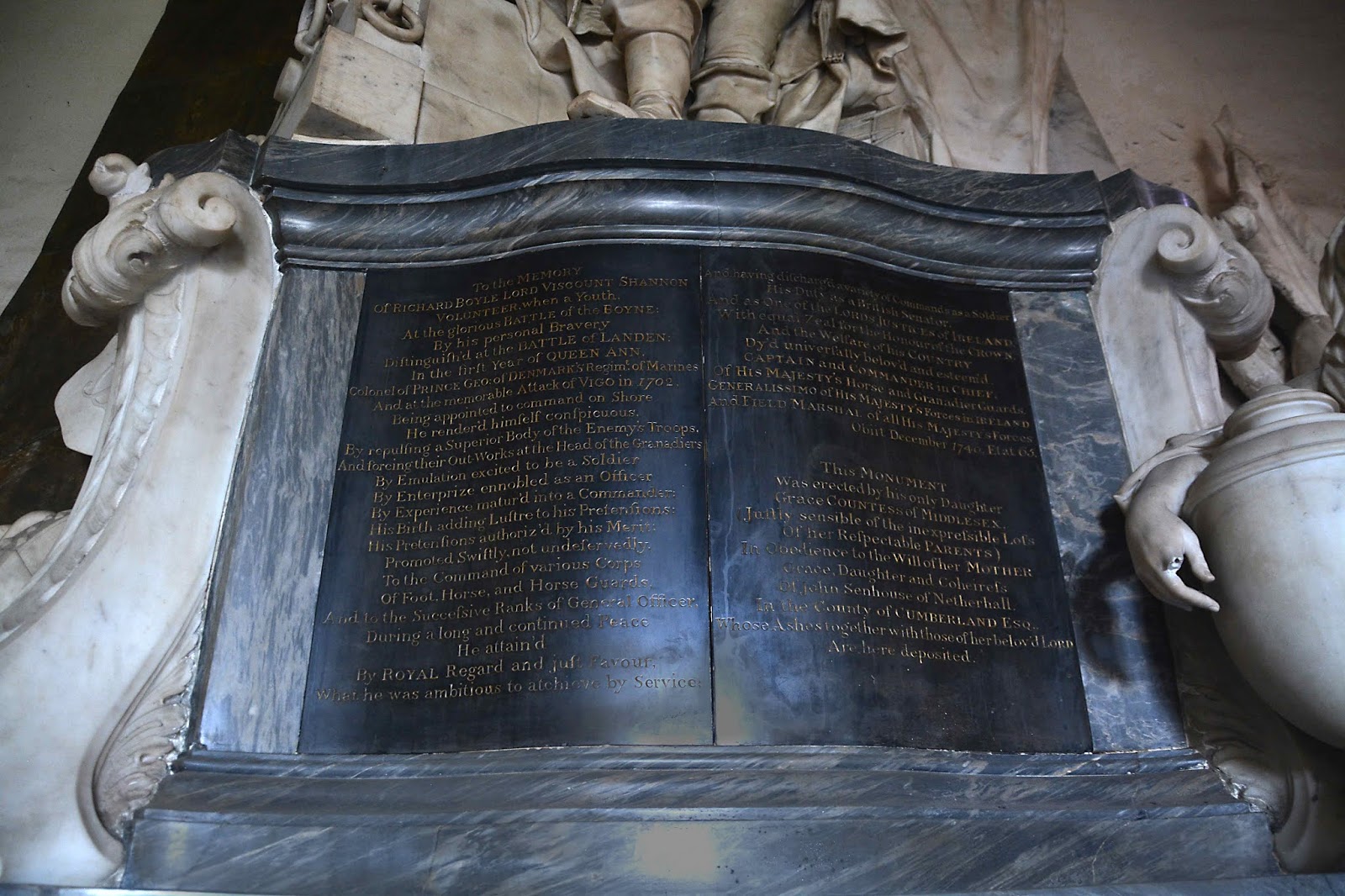 Grace born in 1695 was the co-heiress daughter of John Senhouse of Nether Hall Cumberland.

She left in her will "the sum of £1000, part of my personal estate to be laid out and expended by my executrix in setting up and erecting a monument in the parish church of Walton upon Thames in memory of my late dear husband and me in such a manner as she my executrix shall think proper"

Roubiliac used the same effigy holding an urn (with different face) for his 1760 monument commissioned by Ann Bellamy Lynn d1767 to her husband George Lynn 1758 at Southwick. 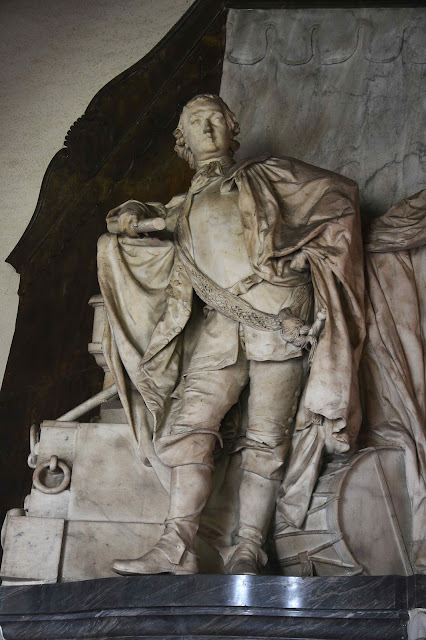 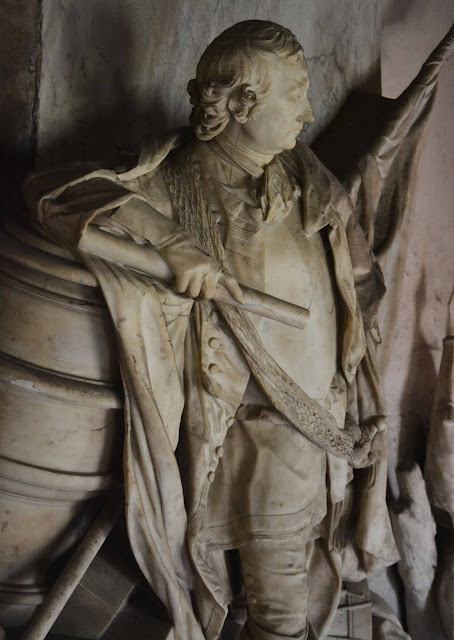 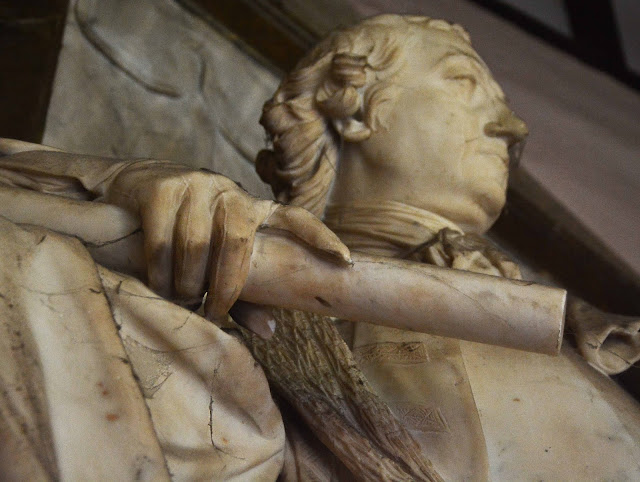 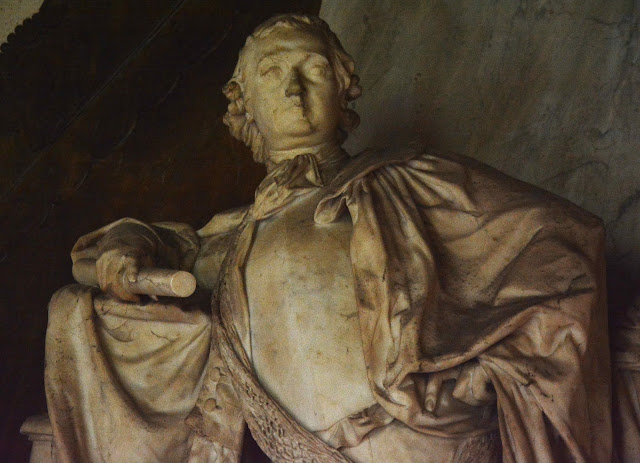 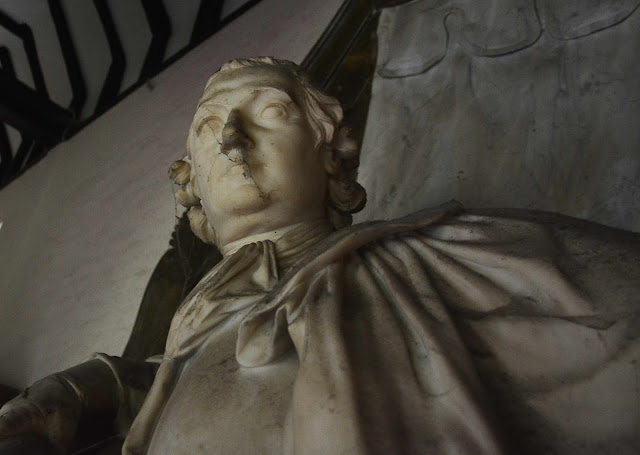 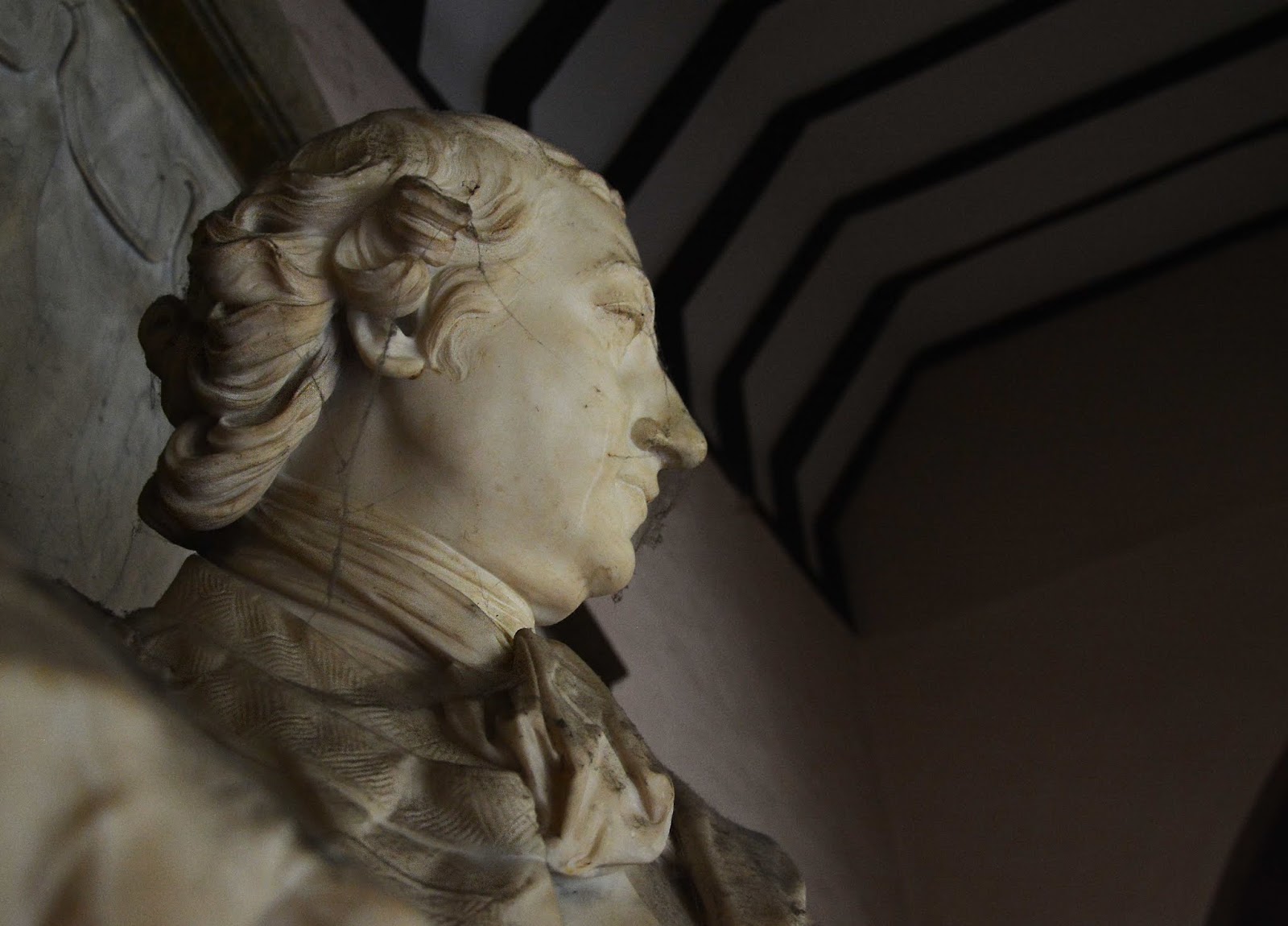 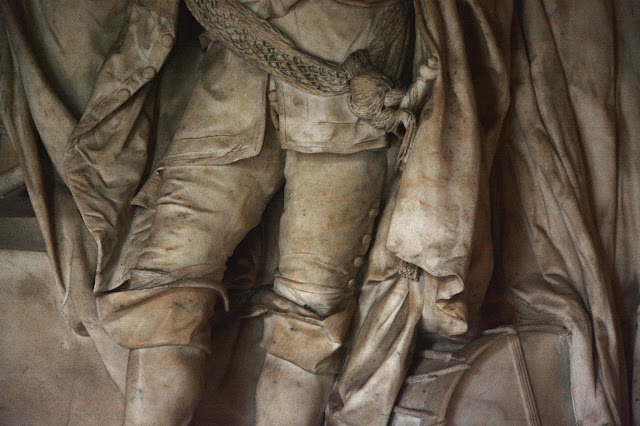 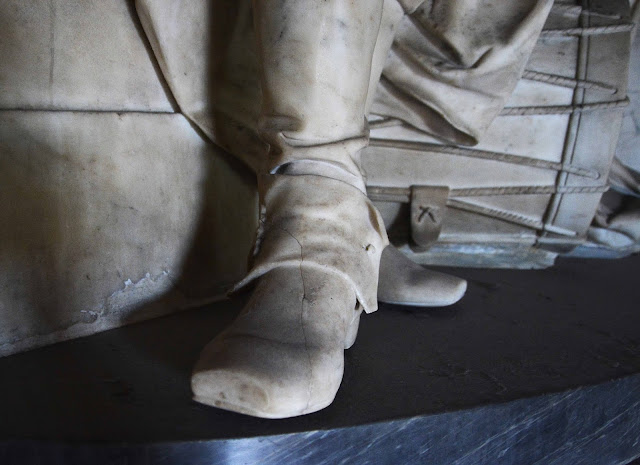 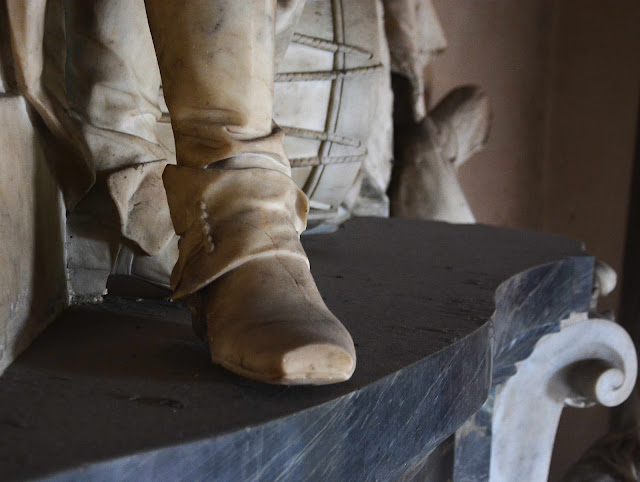 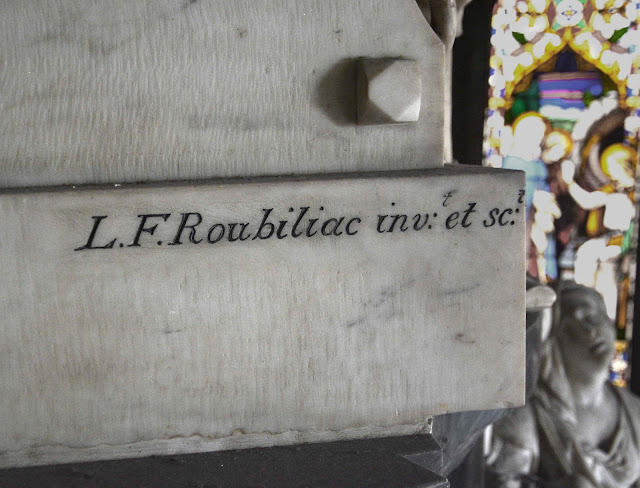 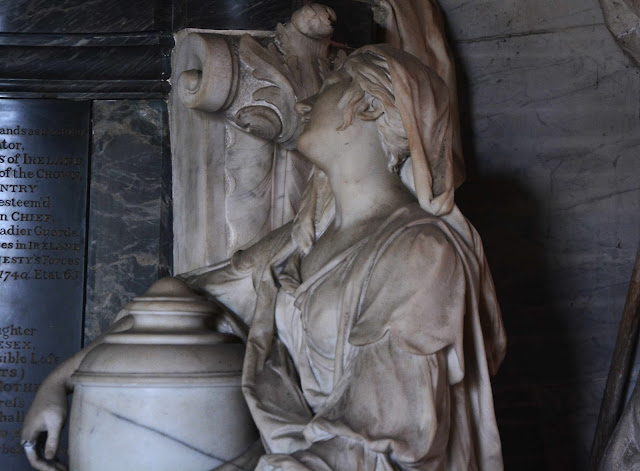 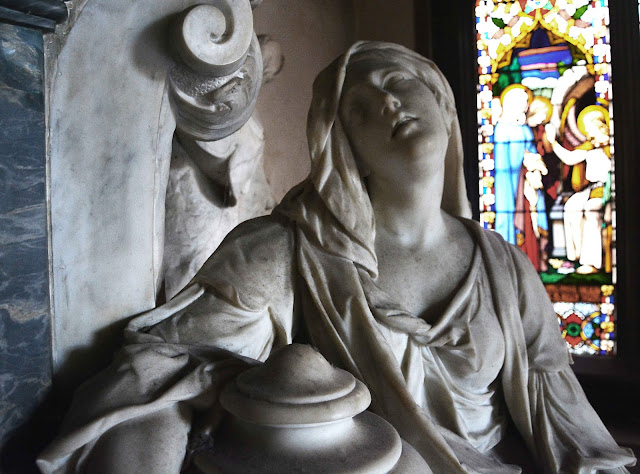 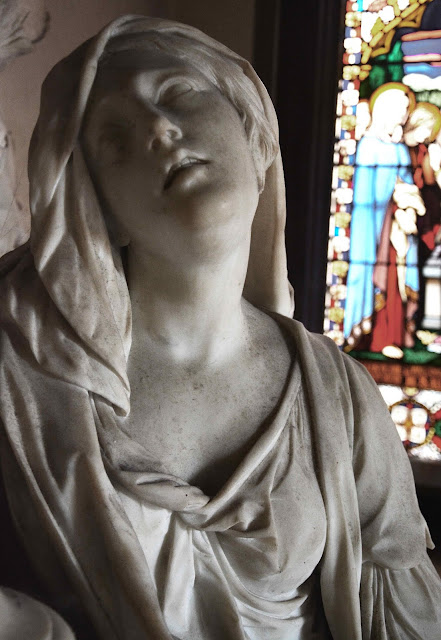 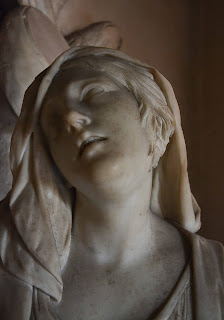 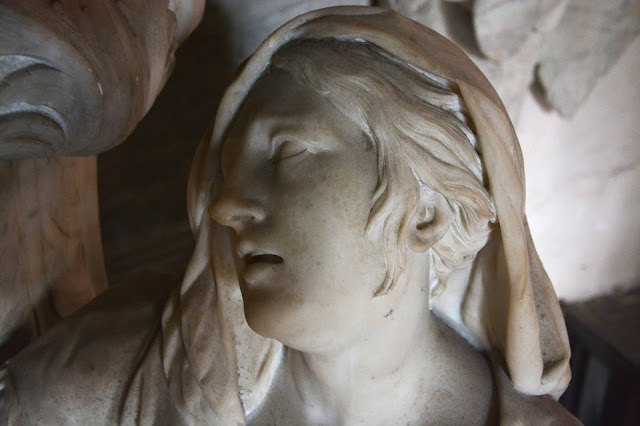 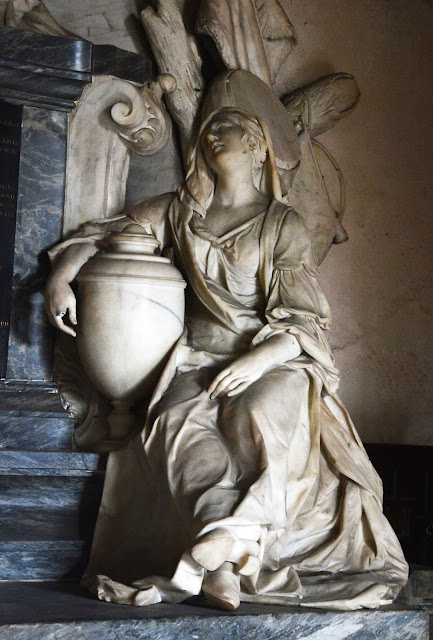 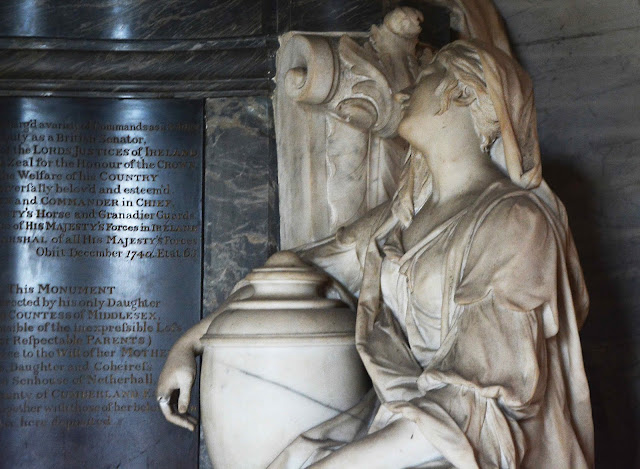 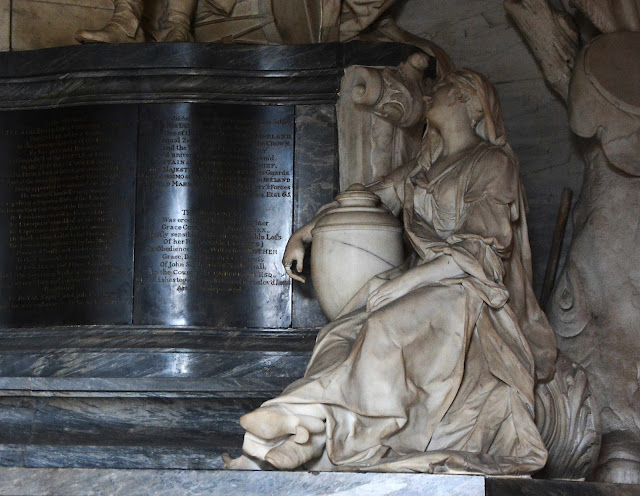 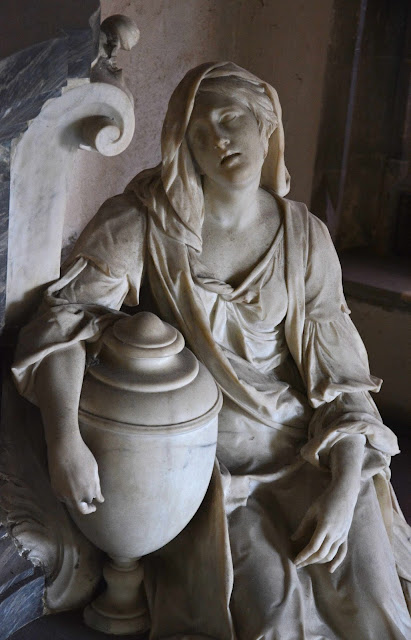 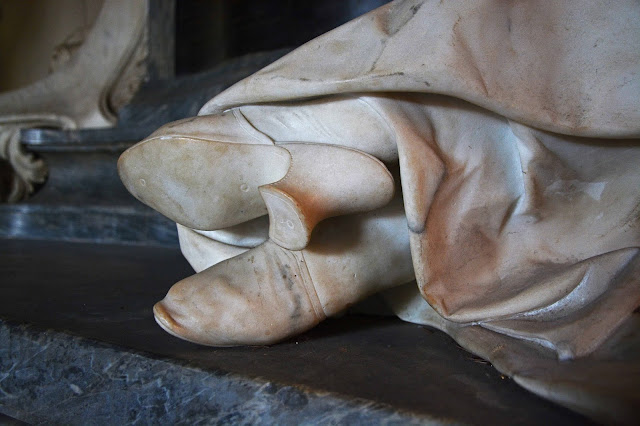 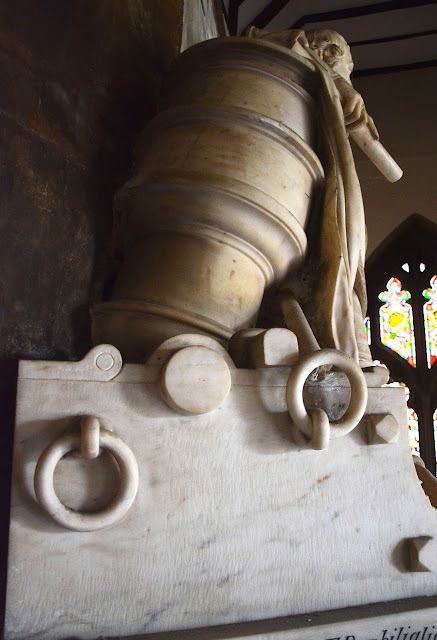 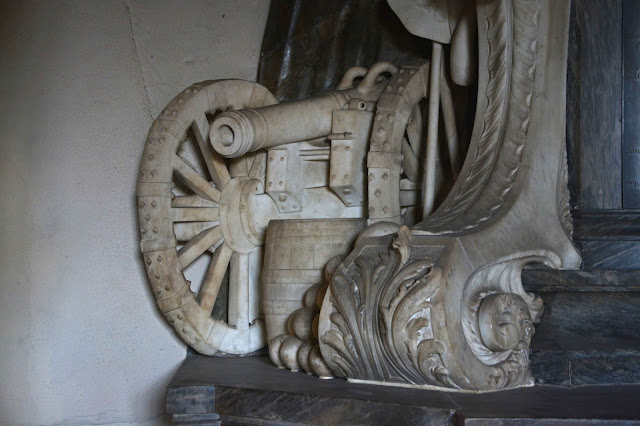 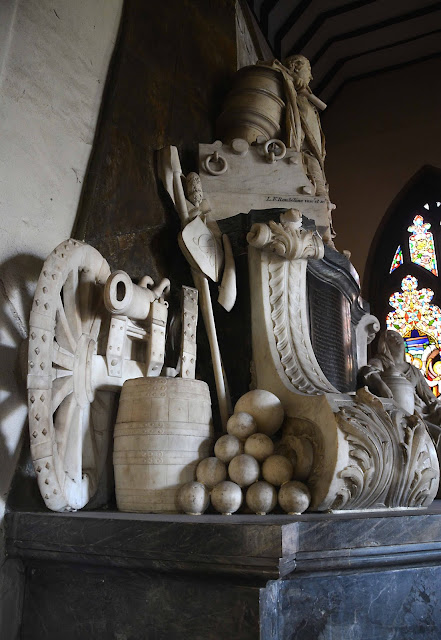 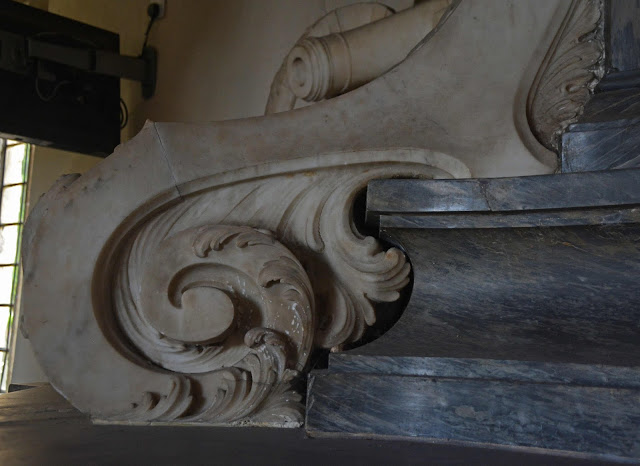 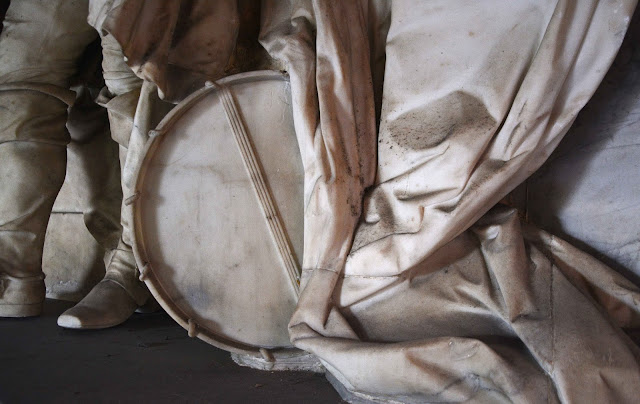 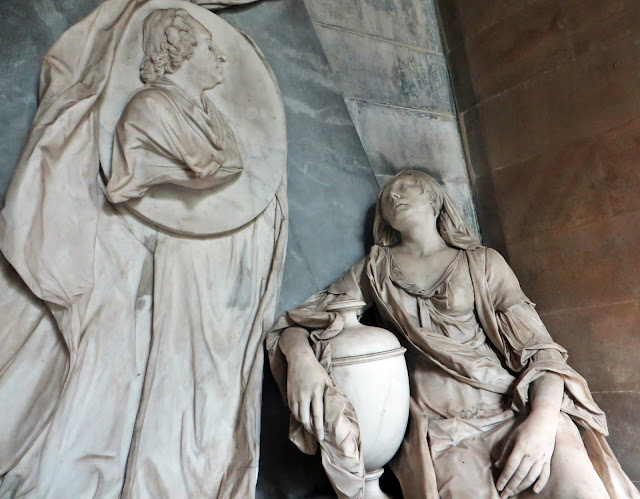 Well vers'd in the laws of his country, he might have been distinquish'd in the profession, but early quitting these severer studies for the calm pleasure of a rural life, he greatly improved by a most elegant taste this his paternal seat of Southwick. Nor was he a stranger to the politest arts being well skill'd in music and philosophy, his mind always equal tender and benevolent render'd him a most affectionate husband, a sincere friend and delightful companion.

This marble rais'd - see where the mourning fair amidst her griefs breathes forth this fervent pray'r., when next we meet may out past bliss improve by holy raptures of mysterious love"

1760 Monument placed by Ann Bellamy Lynn d1767, by  Roubiliac who charged £500 - a lesser amount than usual as Ann's effigy is a copy, except for the face, of Grace Viscountess Shannon
Posted by David Bridgwater at 03:29