Handel in Bronze - by or after Roubiliac

Handel in Bronze -
by or after Louis Francois Roubiliac.

I have written extensively about the portrait statuary of Handel by Roubiliac but have only touched briefly on the bronzes.
Here is my first attempt to make up for this.

This post was inspired by an e mail from Professor Doctor Hans Joachim Marx of the University of Hamburg regarding the portrait busts and reliefs of Handel by Roubiliac.

Thursday 13 May, 1762 The second day of the four day posthumous sale of the contents of the Roubiliac studio at his dwelling house in St Martin's Lane
By Mr Langford of the Piazza, Covent Garden

The sale catalogue under the heading Sundries in Plaster notes -

Lot 27; a mixed lot that mentions a medal of Dr Middleton.

Under the heading Bronzes etc.

Lot 92; A basso relievo of Inigo Jones and Oliver Cromwell.


These three were probably the same works re-sold in an early Christie's sale in 1766, when they were described as 'Sir Isaac Newton, Pope and Handel in bronze finely repaired [i.e. finished] by the late ingenious Mr. Roubiliac'. The suggestion here is that it was Roubiliac himself who finished his bronzes.

On the fourth day - under the heading sundries in plaster. 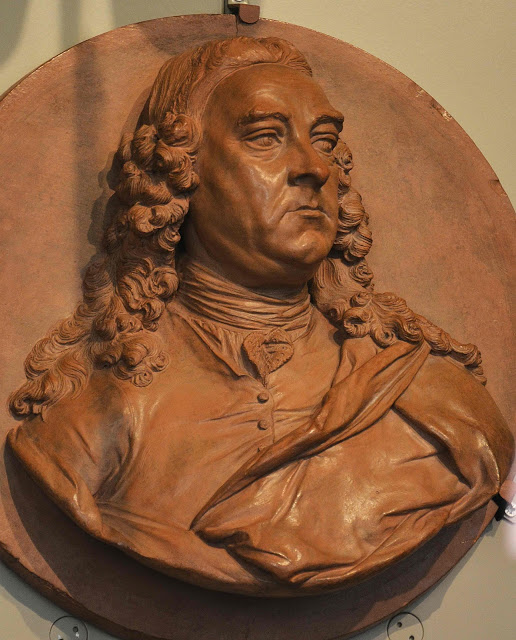 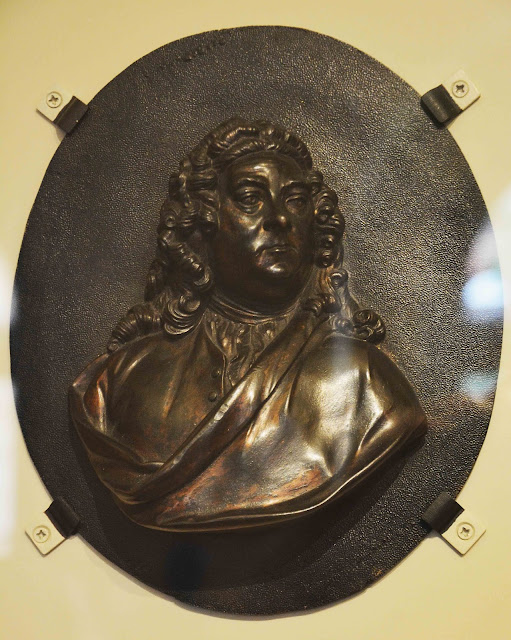 Photograph taken by the author under very difficult circumstances.
The lighting is very poor and avoiding the reflections of the glass case was almost impossible.

This relief is currently on long term loan to the V & A.

For an amusing obituary of Sir Francis see - https://www.independent.co.uk/news/people/obituary-sir-francis-watson-1555593.html

So far this appears to be a unique miniature bronze bust by Roubiliac.
It has not been previously published except for Sotheby's sparse catalogue entries

There is little doubt in my mind that this little bronze bust is the creation of Louis Francois Roubiliac and and an important addition to the corpus of his works. 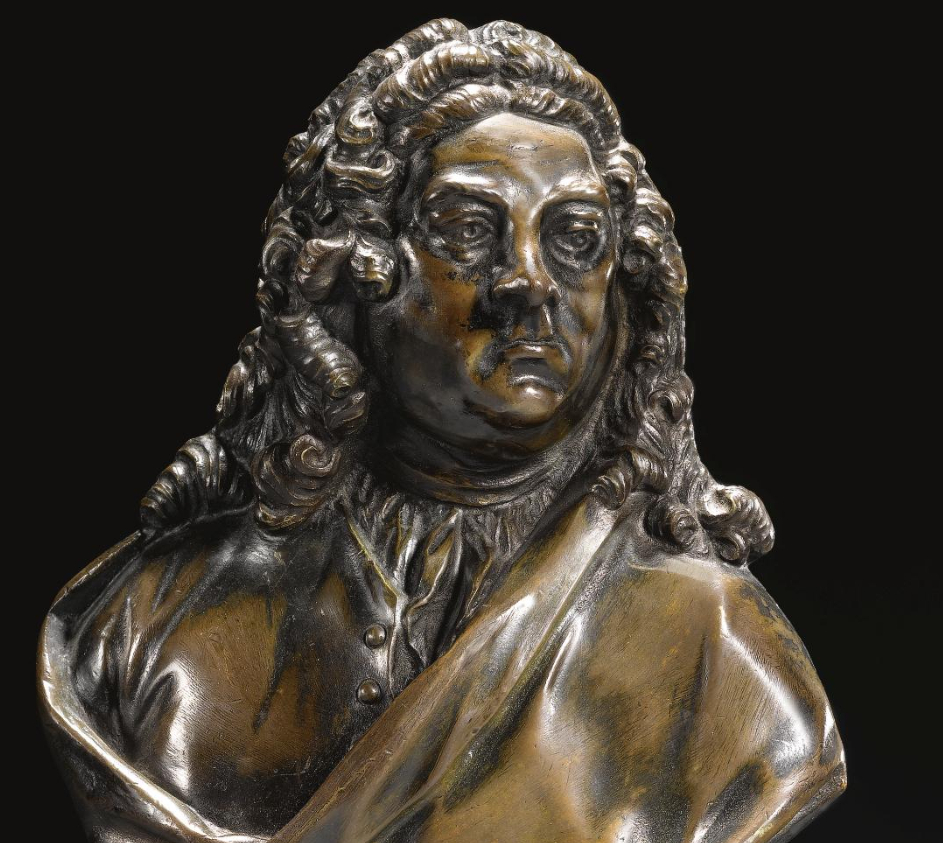 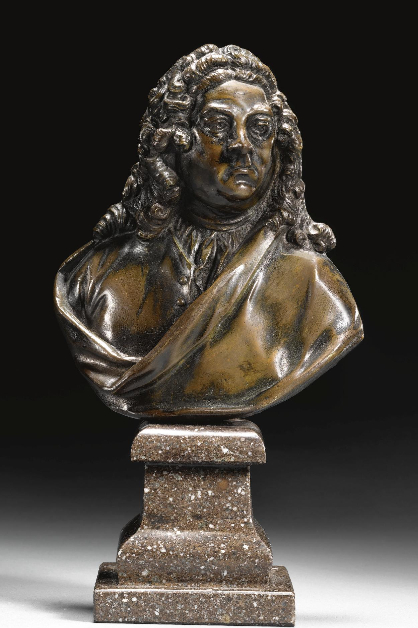 Attributed to the workshop of Louis-François Roubiliac (1695-1772), English, mid-18th century
BUST OF GEORGE FREDERICK HANDEL
bronze, on a porphyry socle.

Sotheby's catalogue entry
Mallet (op.cit.) notes three other bronze reliefs of Handel. That Roubiliac produced portrait high reliefs is proven by a signed and dated inscription on a bust of David Garrick, now in the Garrick Club and by the inclusion of three portrait high reliefs of Newton, Handel and Pope in the sale of his studio held 12-14 May 1762. A different version of the portrait of Handel in terracotta, illustrated by Mallet, is in the Victoria and Albert Museum. 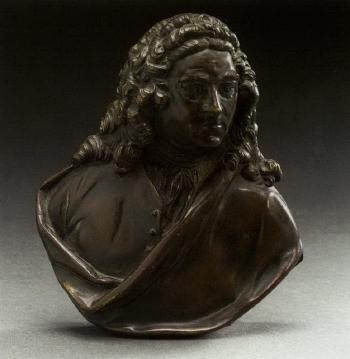 This is the same bust as that above without the added socle.

My policy is to not normally publish the prices of objects featured in my blogs as the price has no relevance to its history or artistic merit - in this example it amuses me to point out that it is a case of "less is more" given the catalogue entries. 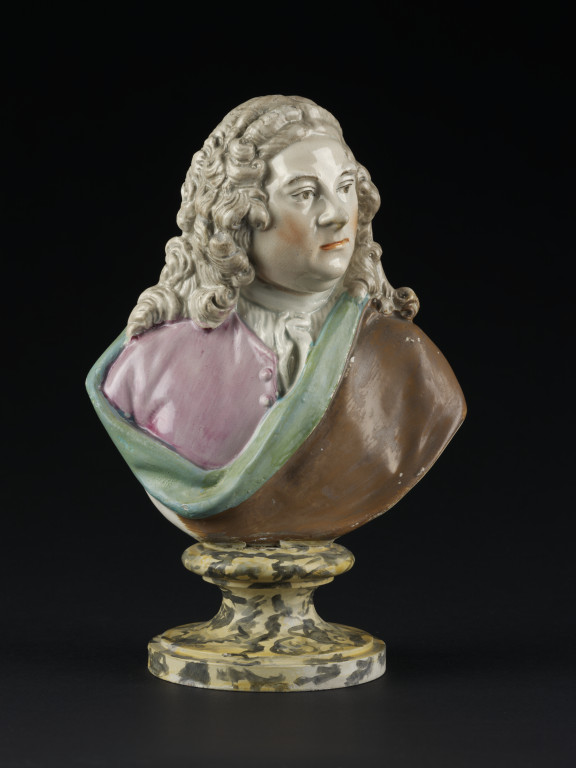 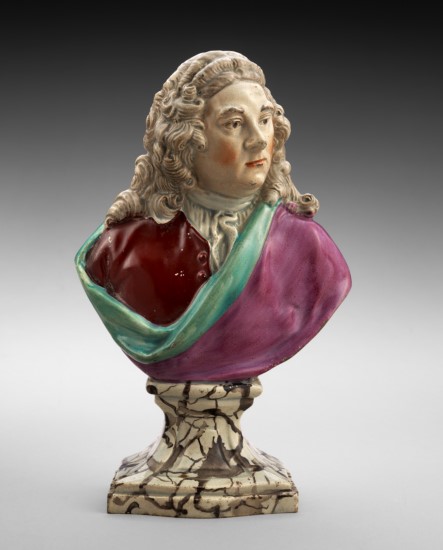 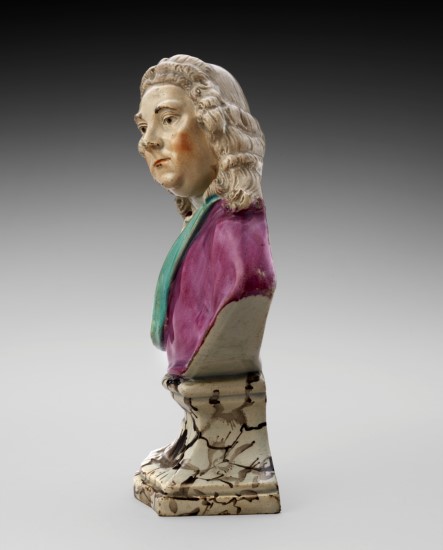 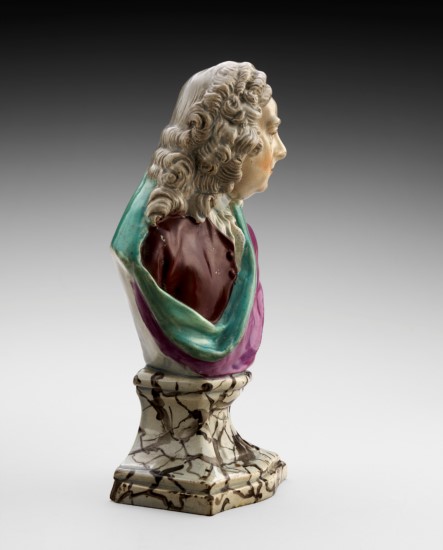 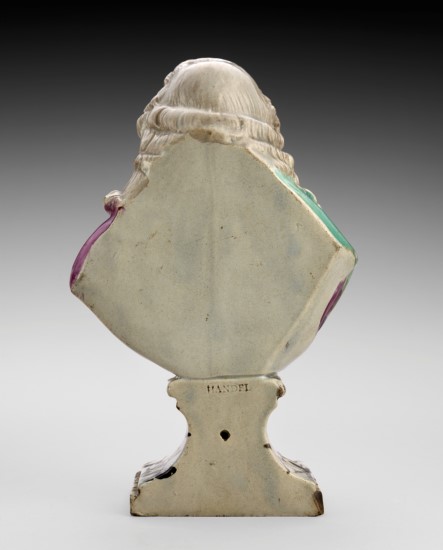 The Museum of Fine Arts Houston. 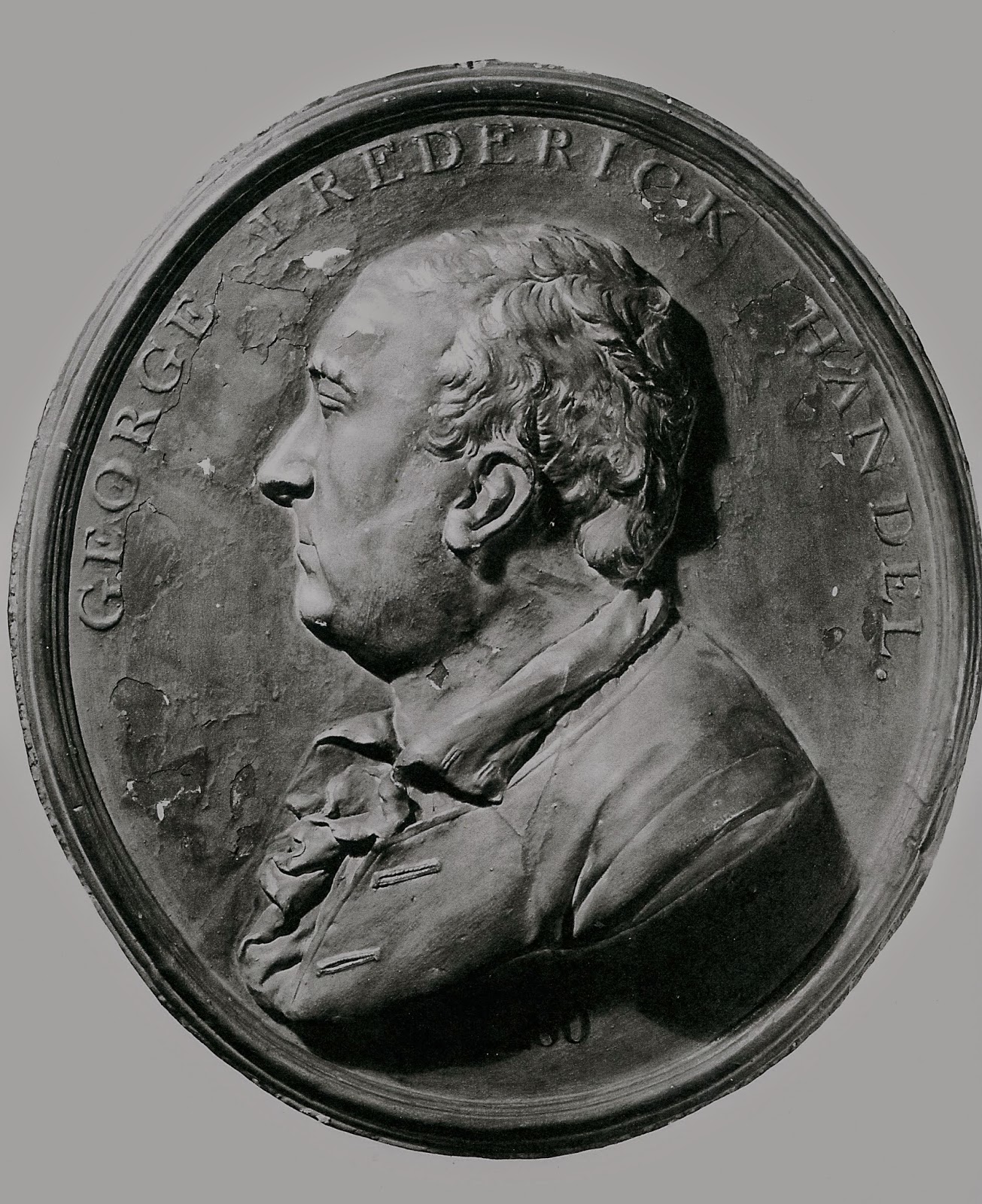 The plaster relief of Handel at the Soane Museum, Lincolns Inn Fields, London since before 1837

Although there is no concrete evidence, this has been I believe fairly safely ascribed to Roubiliac. 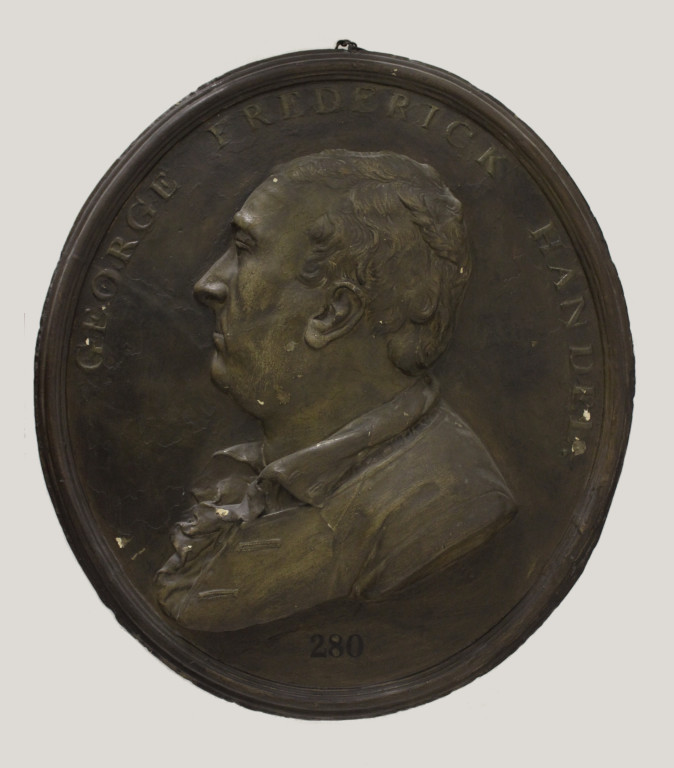 For my blog entry see - 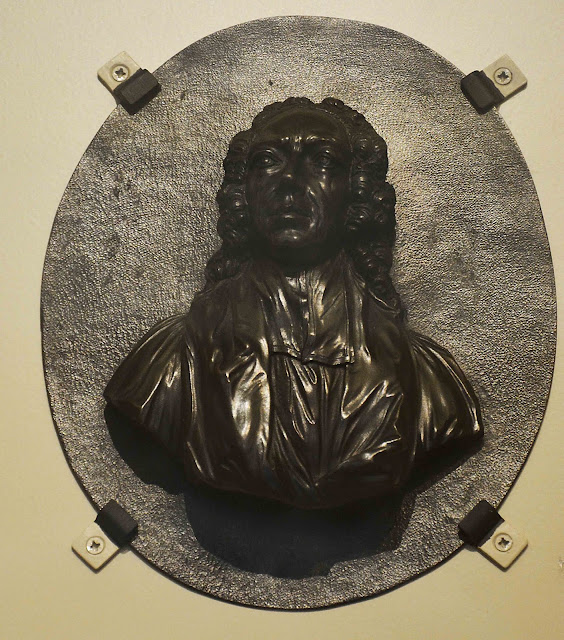 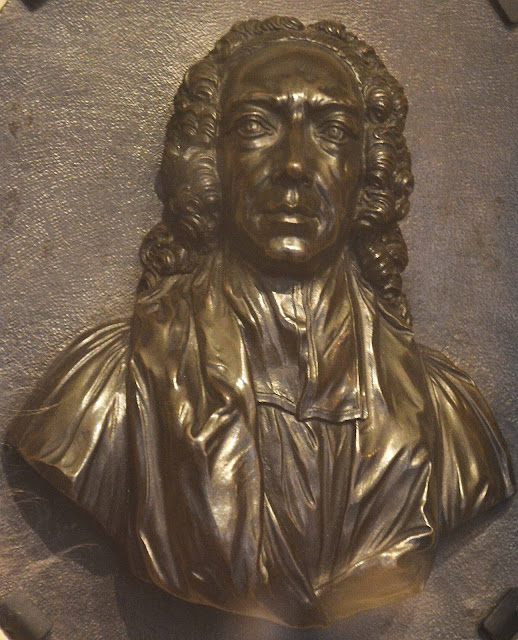 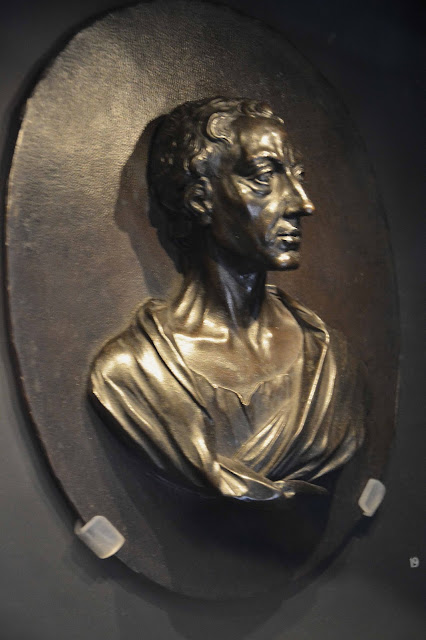 Poor photograph above taken by the author under very difficult circumstances. 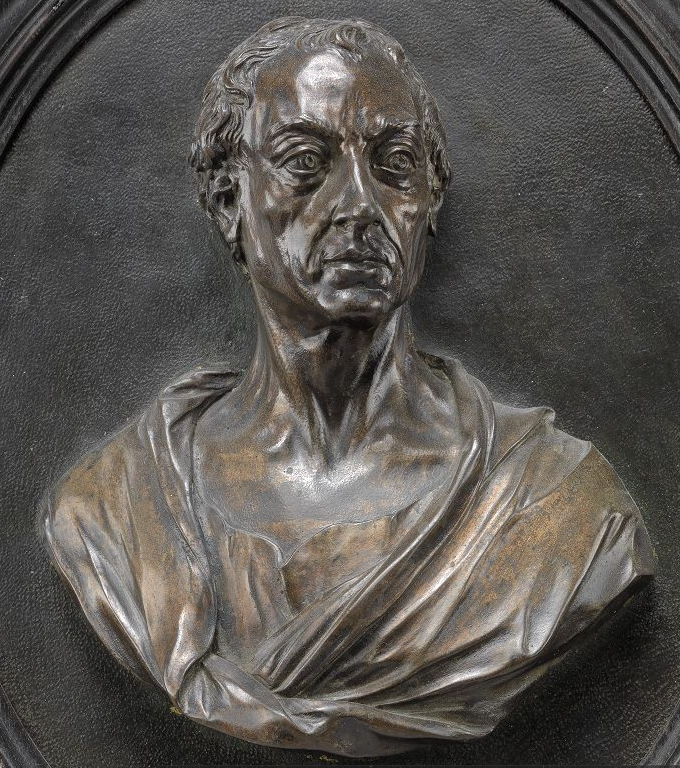 K.Esdaile, The Life and Works of Louis Francois Roubiliac, London, 1928. 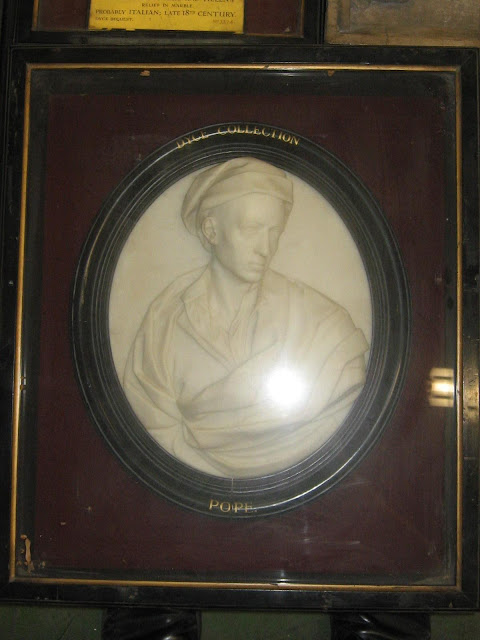 Anonymous Marble Relief.
no size given.

I include this marble relief because I had not been aware of it until recently. 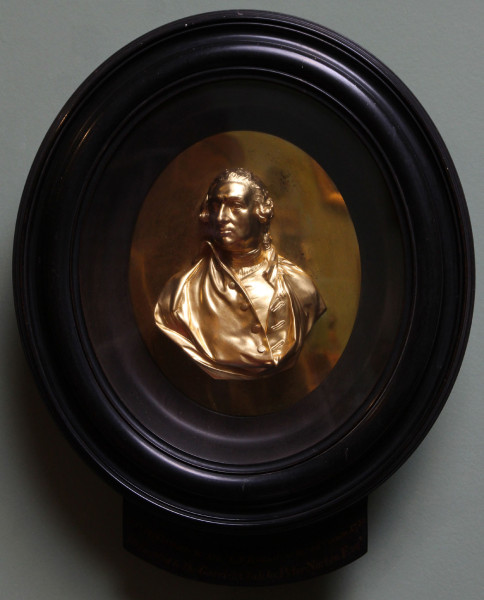 The oval plaque is made of highly polished bronze.

The bust itself is attached to the plaque and is gilded bronze. The gilding, which is matt, may not be original.

Roubiliac was closely involved with Garrick in 1758, in which year he completed the statue of Shakespeare for the Shakespeare temple in Garrick's river-side garden at Hampton (See G0938).

He also produced a terracotta bust of Garrick, seen in Soldi's portrait of Roubiliac in the Garrick Club (G0727). The Soldi is signed and dated 1757/8, and although the terracotta bust is lost there is a plaster cast of it in the National Portrait Gallery (707a).

It is similar in many ways to S0015, although the bronze has a much brighter feel to it with the head lifted, the stoop alleviated, and details such as the buttons added.

In addition, the sale included four plaster medallions in plaster of Garrick and three medallions in wax as well as two terracotta busts, a plaster bust, and a mould for the bust. Roubiliac's marble bust of Garrick was sold at Mrs Garrick's sale, Christie's 23 June 1823.

Text and Photograph above, copied from the Garrick Club website see - 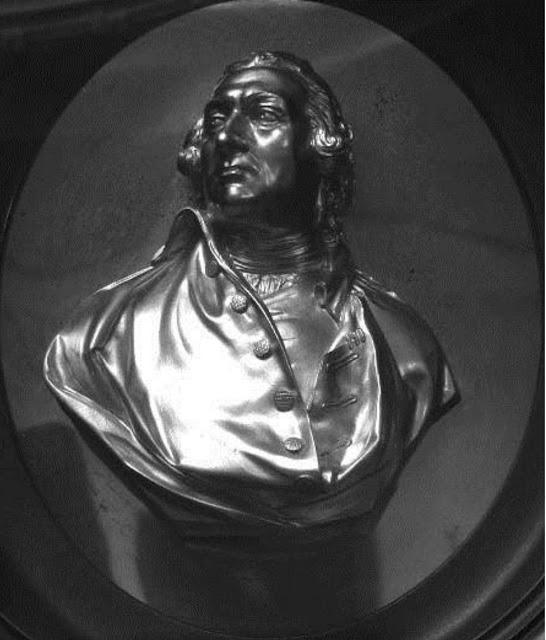 Another image of the Garrick Club Bronze relief.

Kindly supplied by Marcus Risdall, Curator of the Garrick Club Collection in 2015.

The Bronze Reliefs of Oliver Cromwell

There are at least 4 version of this relief
Currently I am doubtful if any of them are related to Roubiliac. 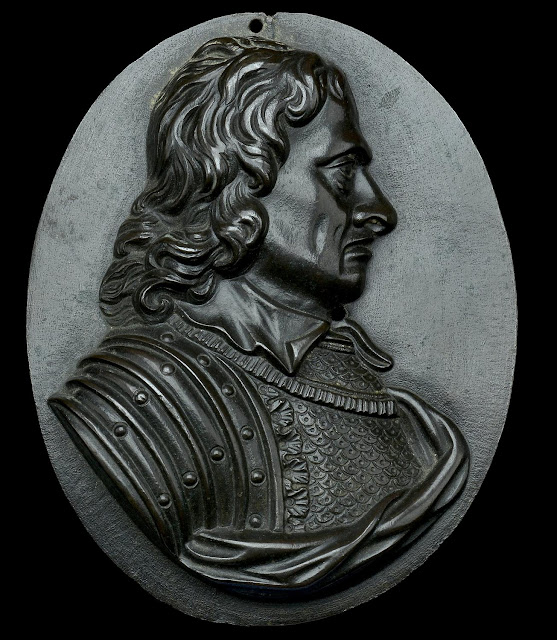 This image from the website of Dix Noonan auctioneers 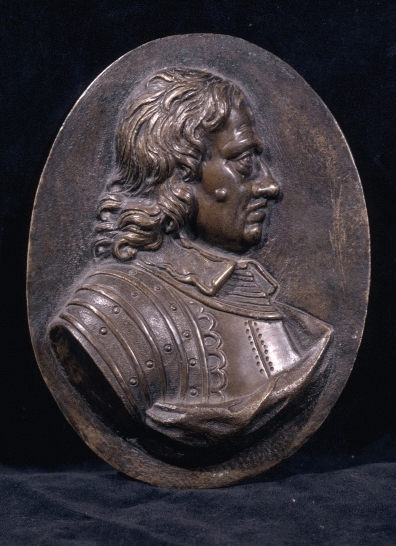 The quality of this relief is much below that of the other reliefs illustrated here.

John Mallet in the article ''Some Portrait Medallions by Roubiliac'', Burlington Magazine, April 1962, pl.26, illustrates the full face terracotta medallion of Cromwell and also four slightly larger bronze medallions of Pope, Middleton, Handel and Garrick which, although full-face, are of a very similar style to this portrait. Whilst the catalogue entries are brief and sizes never given, Mr.Mallet also refers to another entry in the second day''s sale under the heading ''Bronzes etc.'', where no.92 reads ''A basso relievo of Inigo Jones and Oliver Cromwell.''

Image and text from the website of dealer Philip Mould - Historical Portraits. 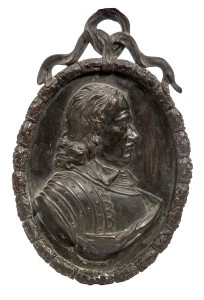 For an interesting posting on Handel see -

http://www.boughtonhouse.co.uk/wp-content/uploads/2017/04/Handel-A0-All-Panels_lower-res.pdf
Posted by David Bridgwater at 12:18