Bought under the Murray bequest for £185, in 1959. The reliefs were formerly in the collection of Dr Richard Mead (Mead cabinet). 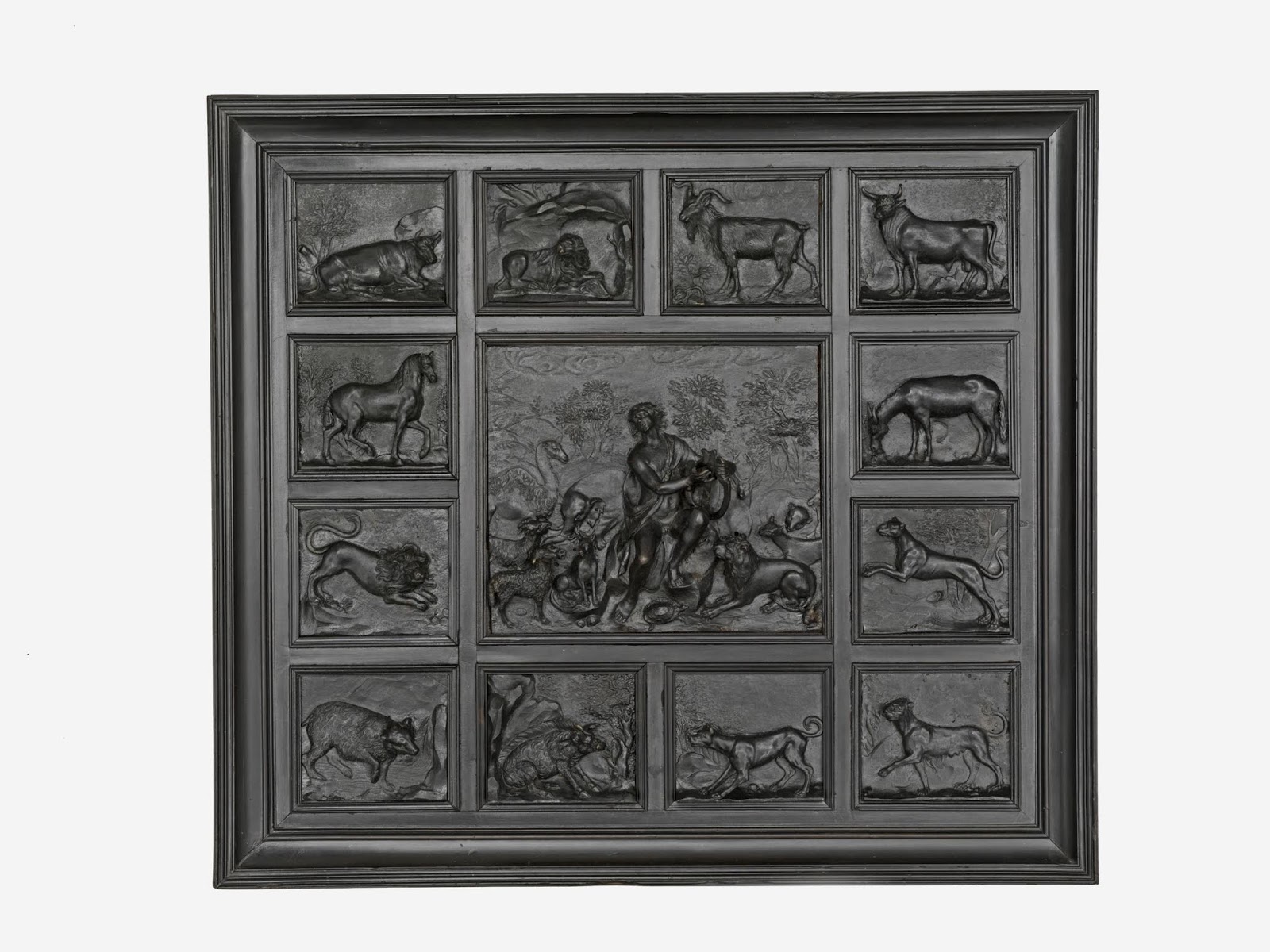 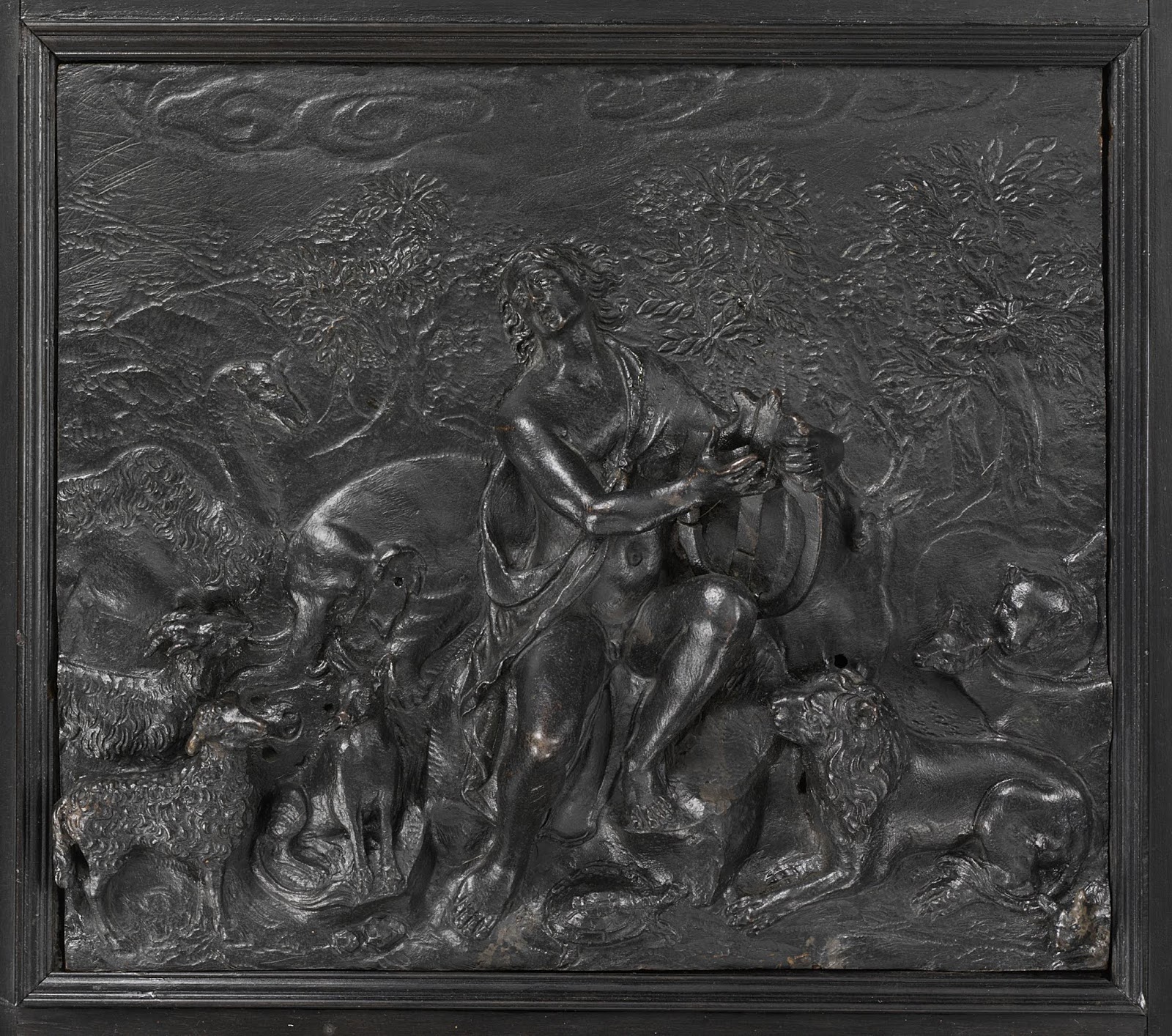 Orpheus Playing to the Animals. 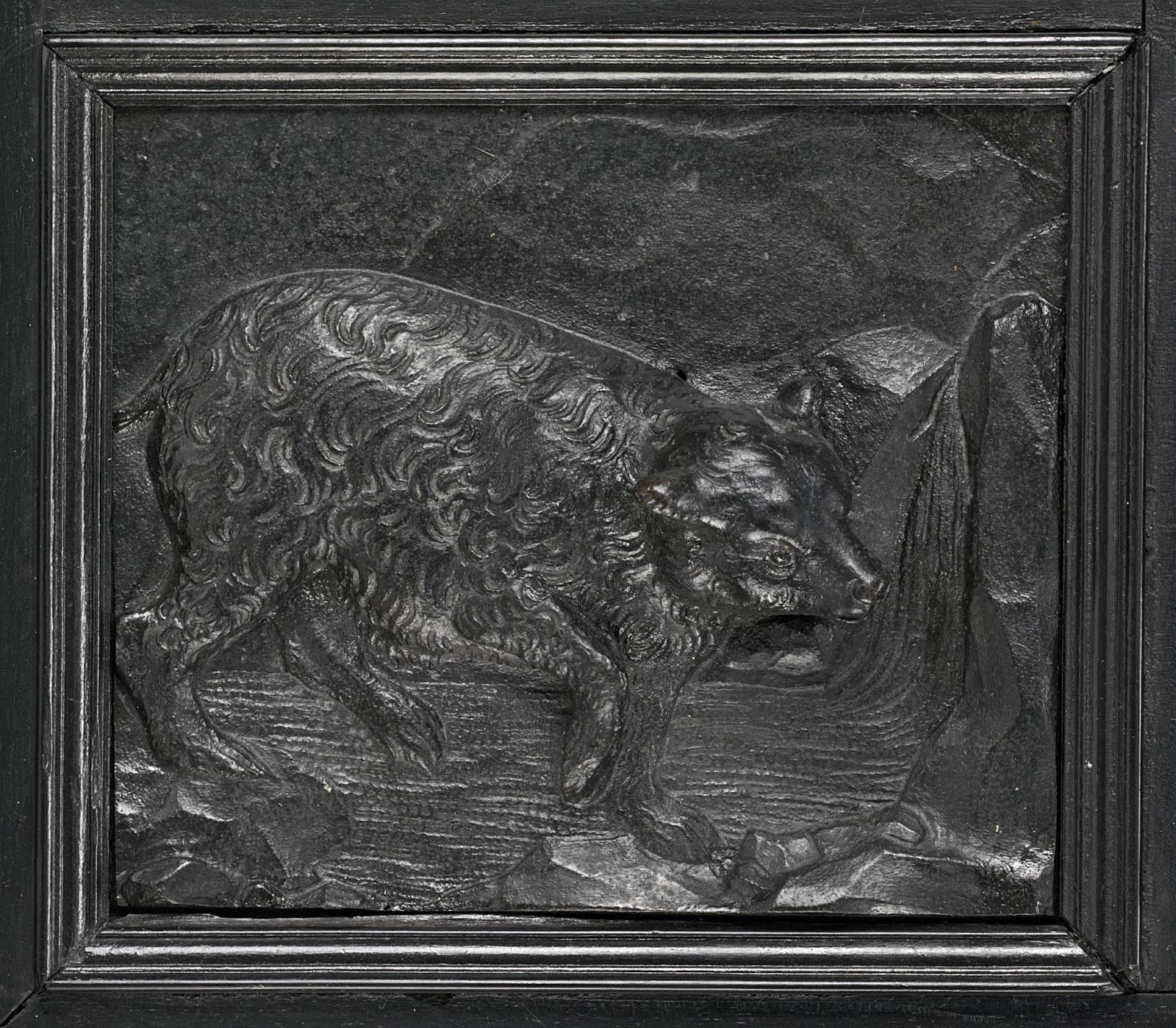 The reliefs were formerly in the collection of physician and collector, Dr Richard Mead (1673-1754). A variation on the Orpheus relief, together with eight of the animal plaquettes based on the same models, also appear on John Evelyn's cabinet (W.24-1977) 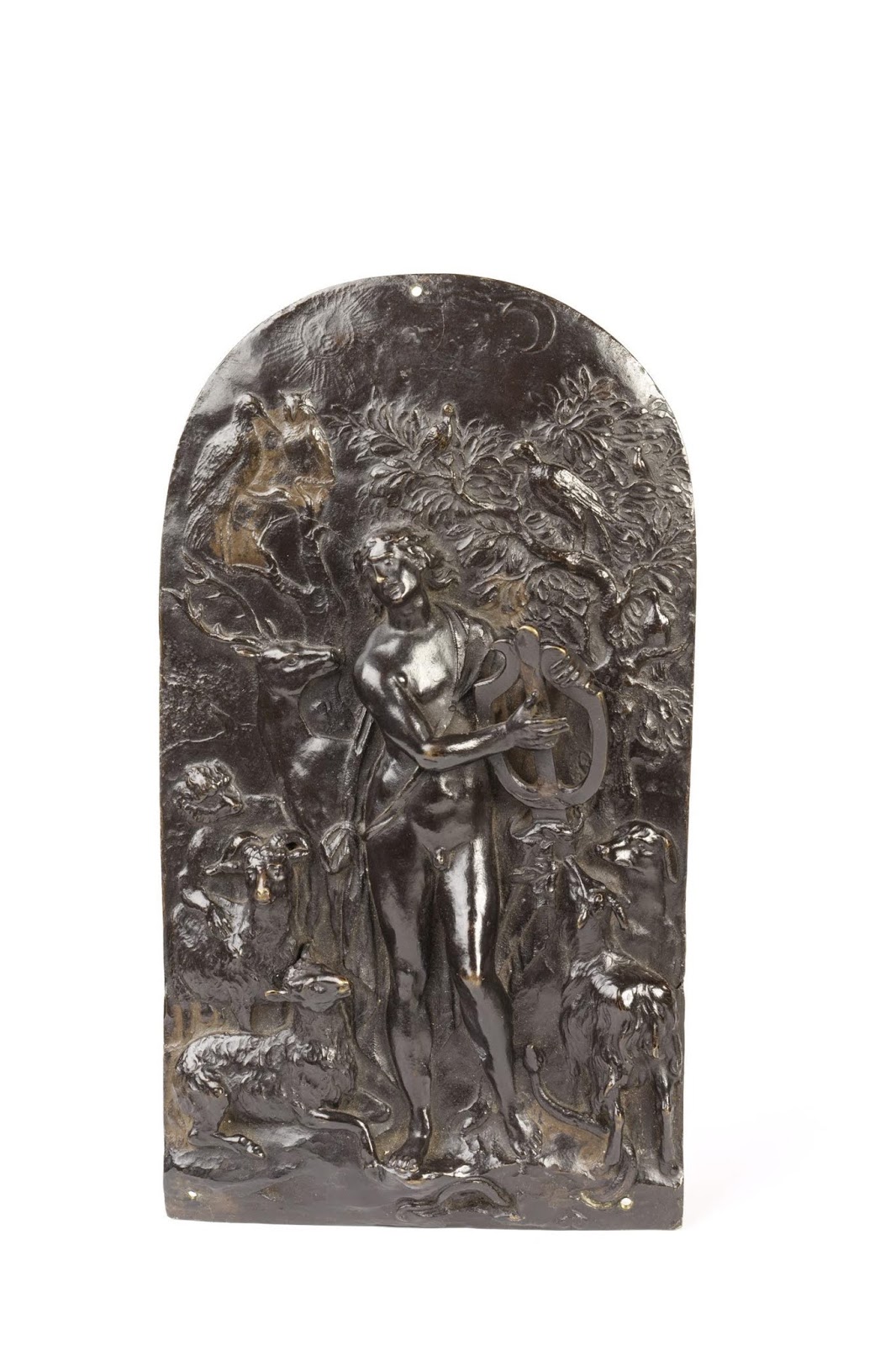 This relief was possibly in the collection of Charles Jenners, Ormond St (cf. Dodsley 1761). 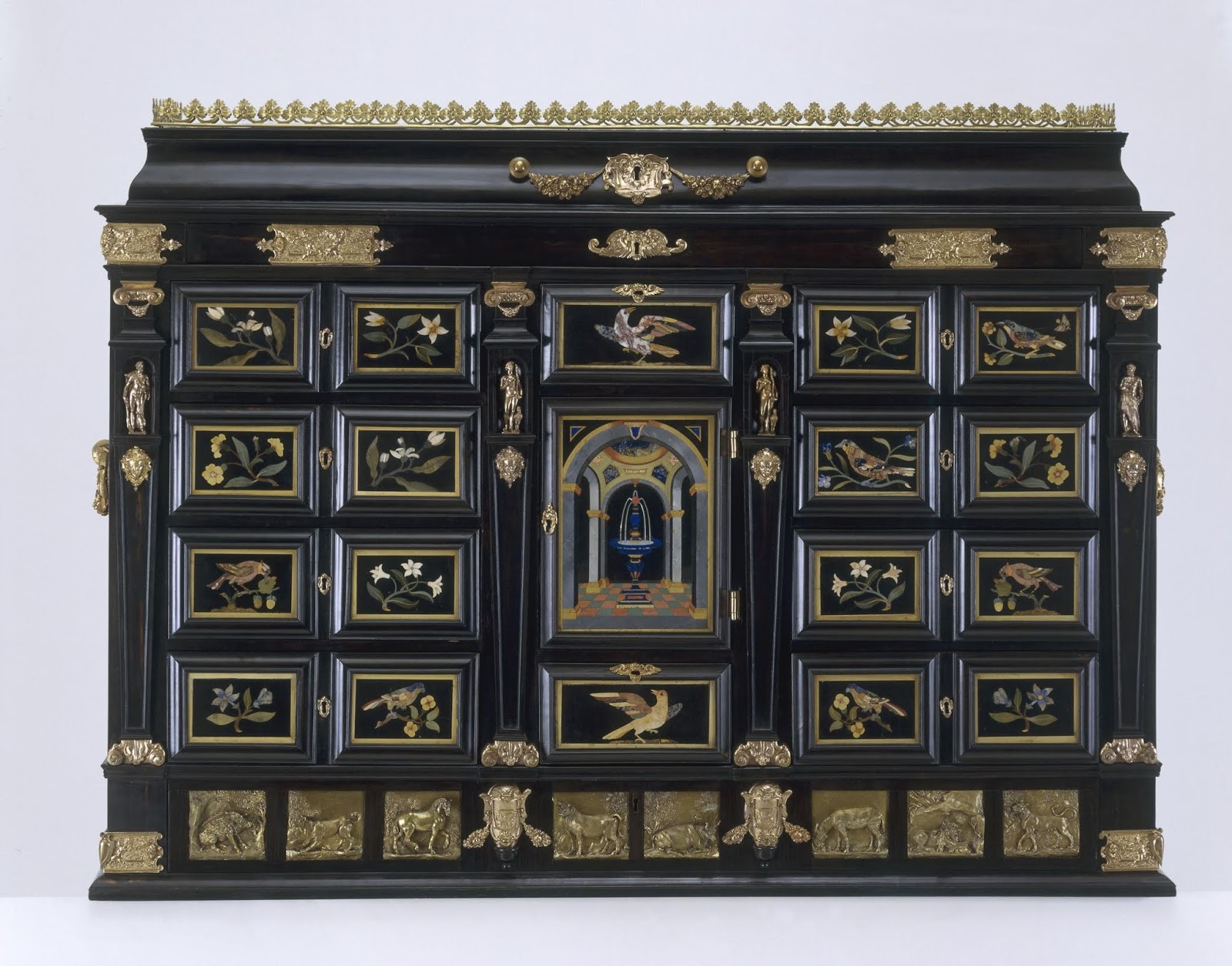 The cabinet was made in Florence. It is veneered in ebony and incorporates 19 pietra dura, or hardstone, plaques supplied by Domenico Benotti. The gilt-bronze mounts and plaques were added in England, in the workshop of Francesco Fanelli, though it is not known for certain when this took place. The gilt-bronze strawberry-leaf crest was probably made and added in about 1830-1840.

Subjects Depicted
The subjects include 'Orpheus Playing to the Beasts' and the figures of Juno, Hercules and Jupiter.

People
The cabinet was owned by John Evelyn, who travelled extensively through France and Italy during the English Civil War of 1643-1645. When in Florence, he ordered the pietra dura plaques directly from Domenico Benotti, who was then considered to be one of the 'Celebrated masters'. On arriving in England, the cabinet was most likely housed in Dover Street, London. Soon after Evelyn's death in 1706 it was moved to his country residence, Wotton House in Wotton, Surrey. In 1813, John Evelyn's diaries were discovered in a 'ebony cabinet', quite possibly this one, in Wotton House. 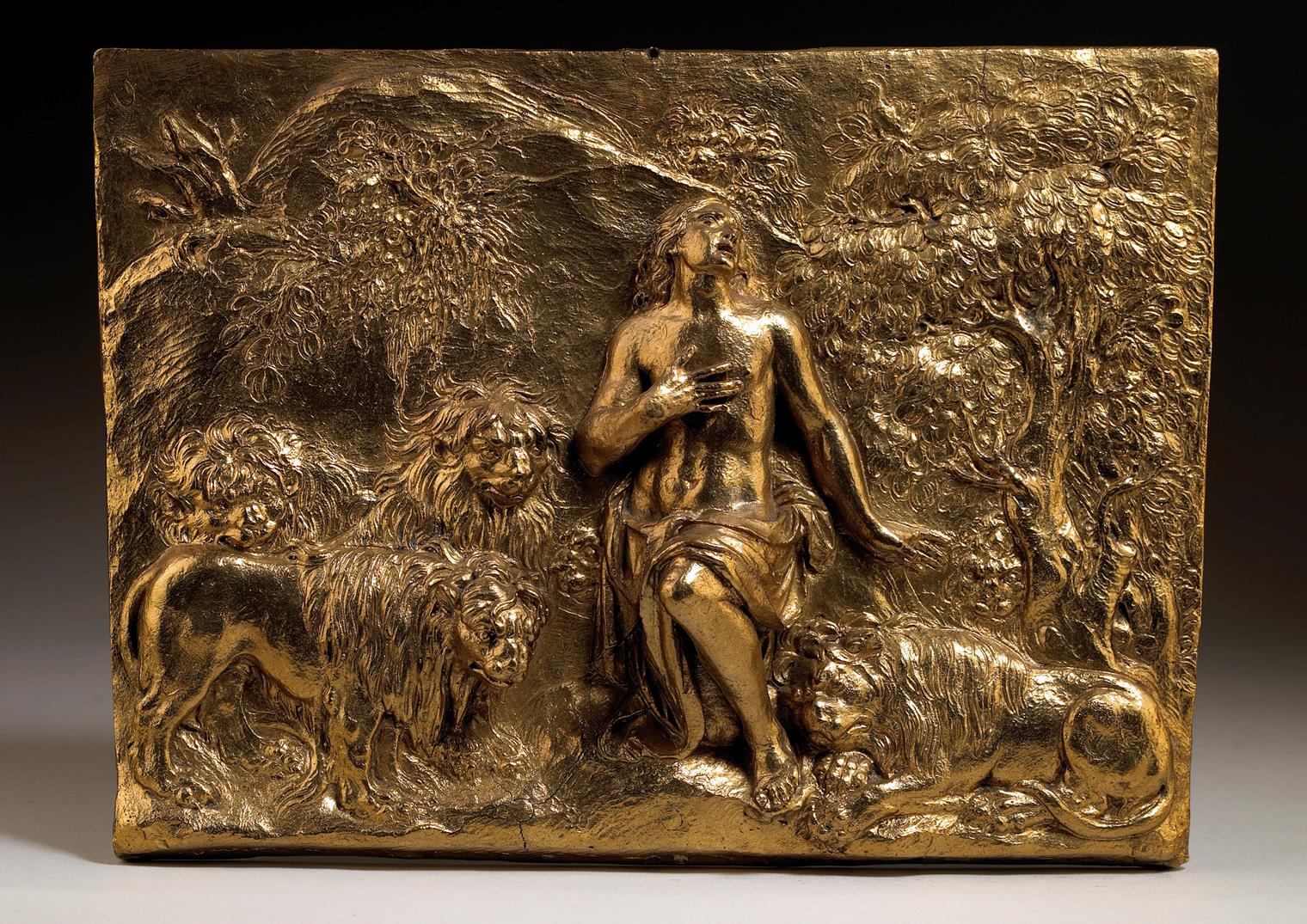 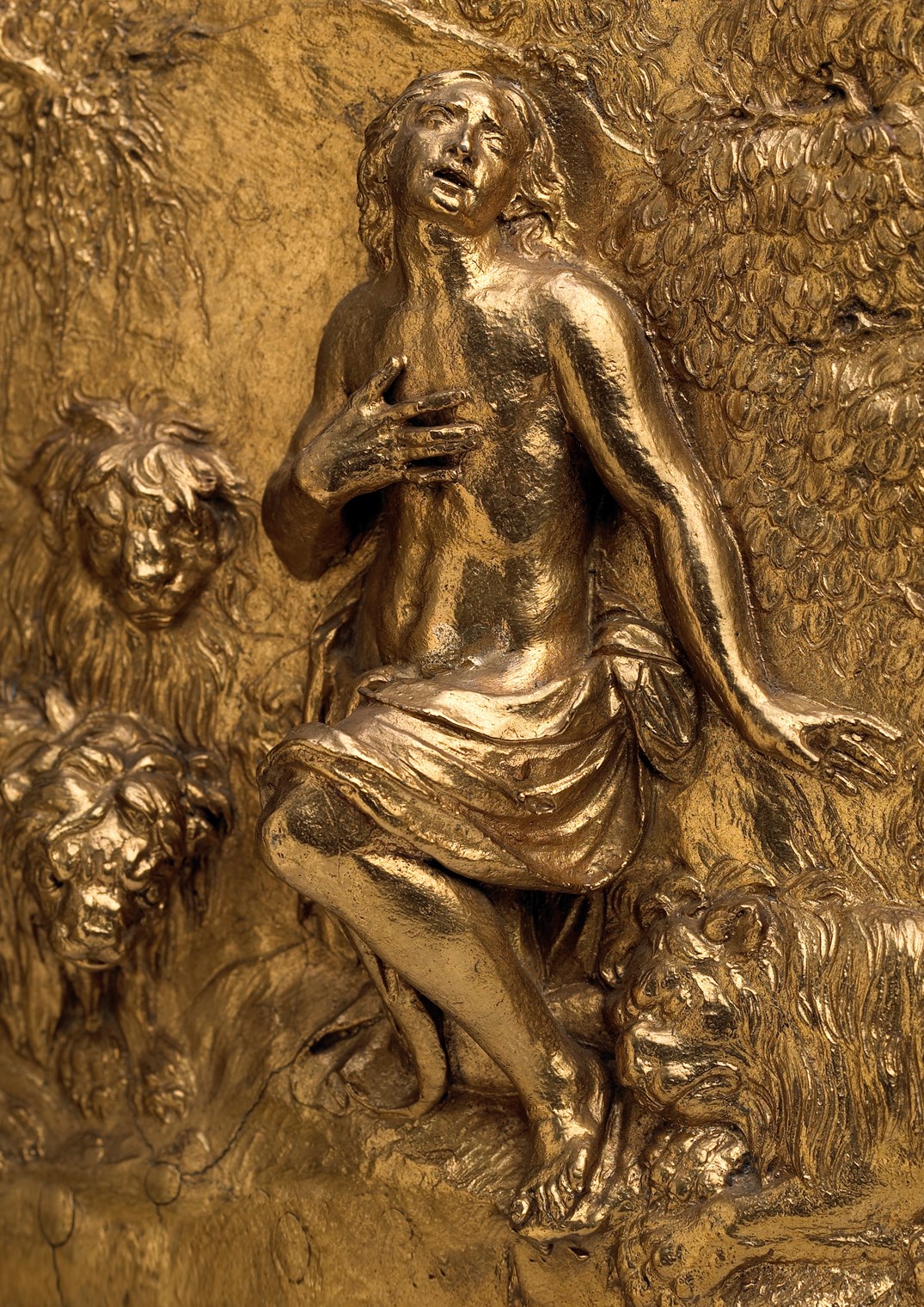 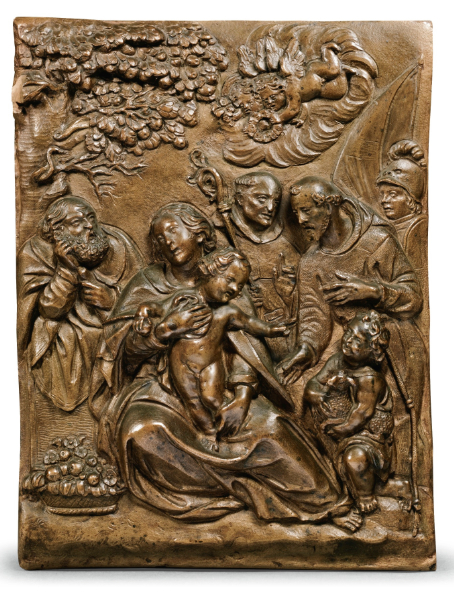 The association of the present composition with Francesco Fanelli was first made by Charles Avery in his 1975 discussion of the prototype at the Royal Ontario Museum (op. cit.). The attribution to Fanelli's workshop has largely been accepted, and it has been argued that the presence of Saint George in the present version of the relief suggests an origin in the Genoese period of the artist's workshop (see Rossi, op. cit.). 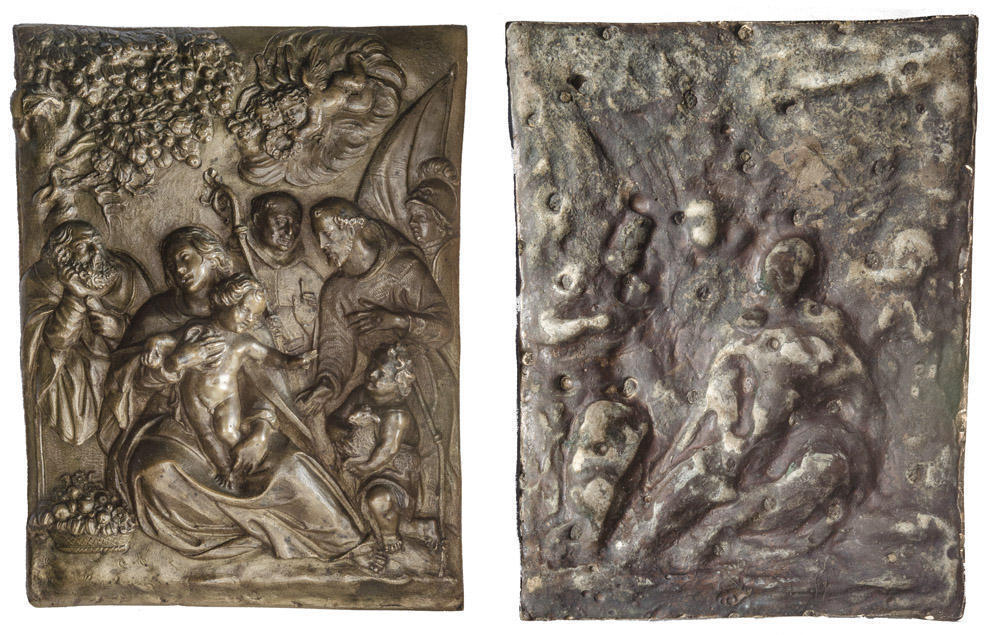 Another example in gilt-bronze was sold in these rooms, 18 April 2002, lot 574. This also showed a similar reverse with multiple sprues. The saint on the right has been identified as St. George, the patron saint of Genoa and this would lend credence to an origin in that city.

the closeness to the Sothebys version would suggest that they are perhaps one and the same - the photographs taken in different lighting conditions.
_________________ 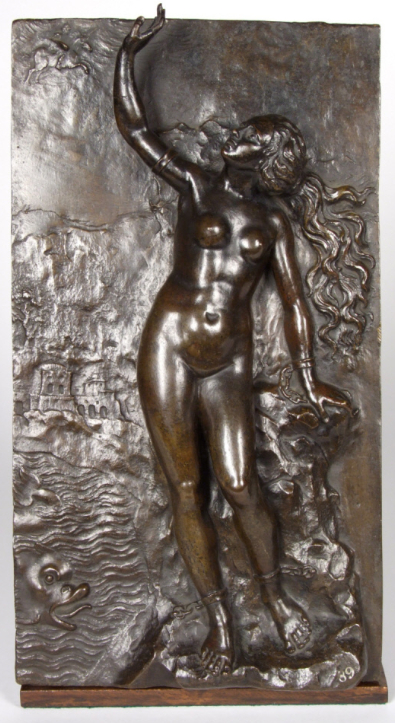 Andromeda Shackled to the Rock 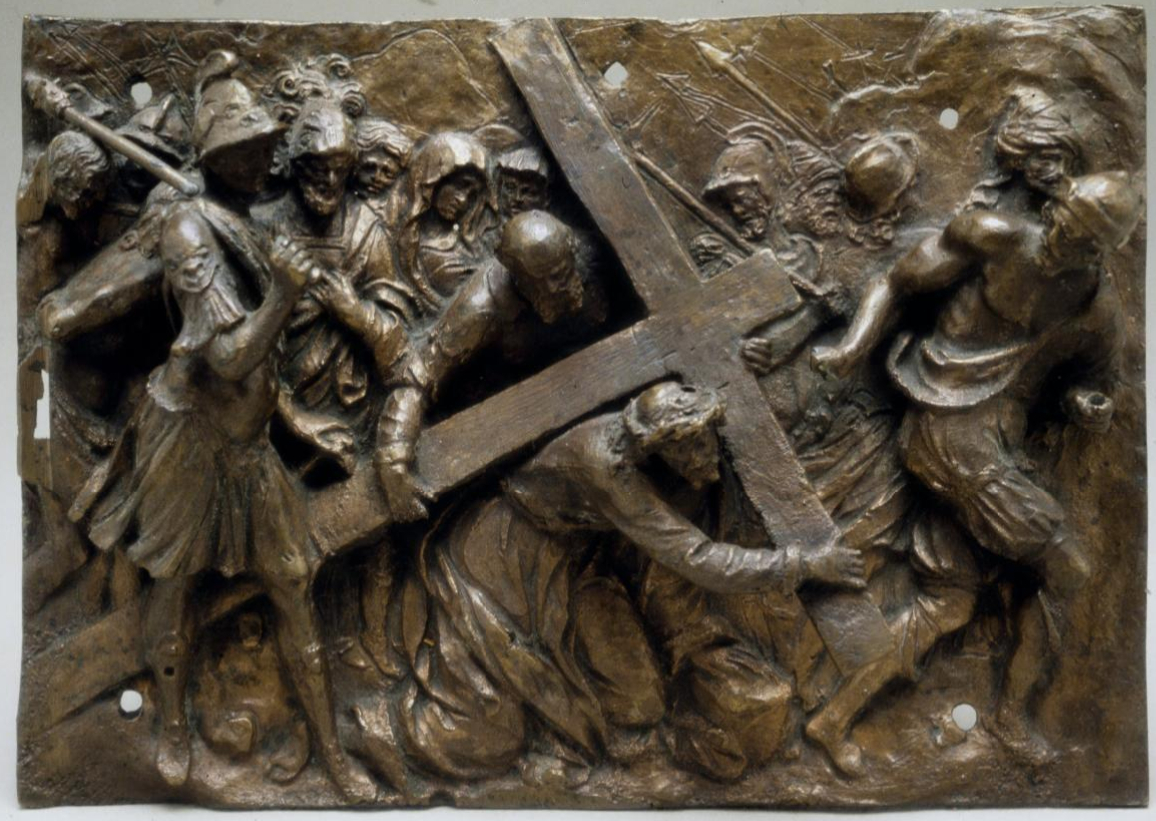 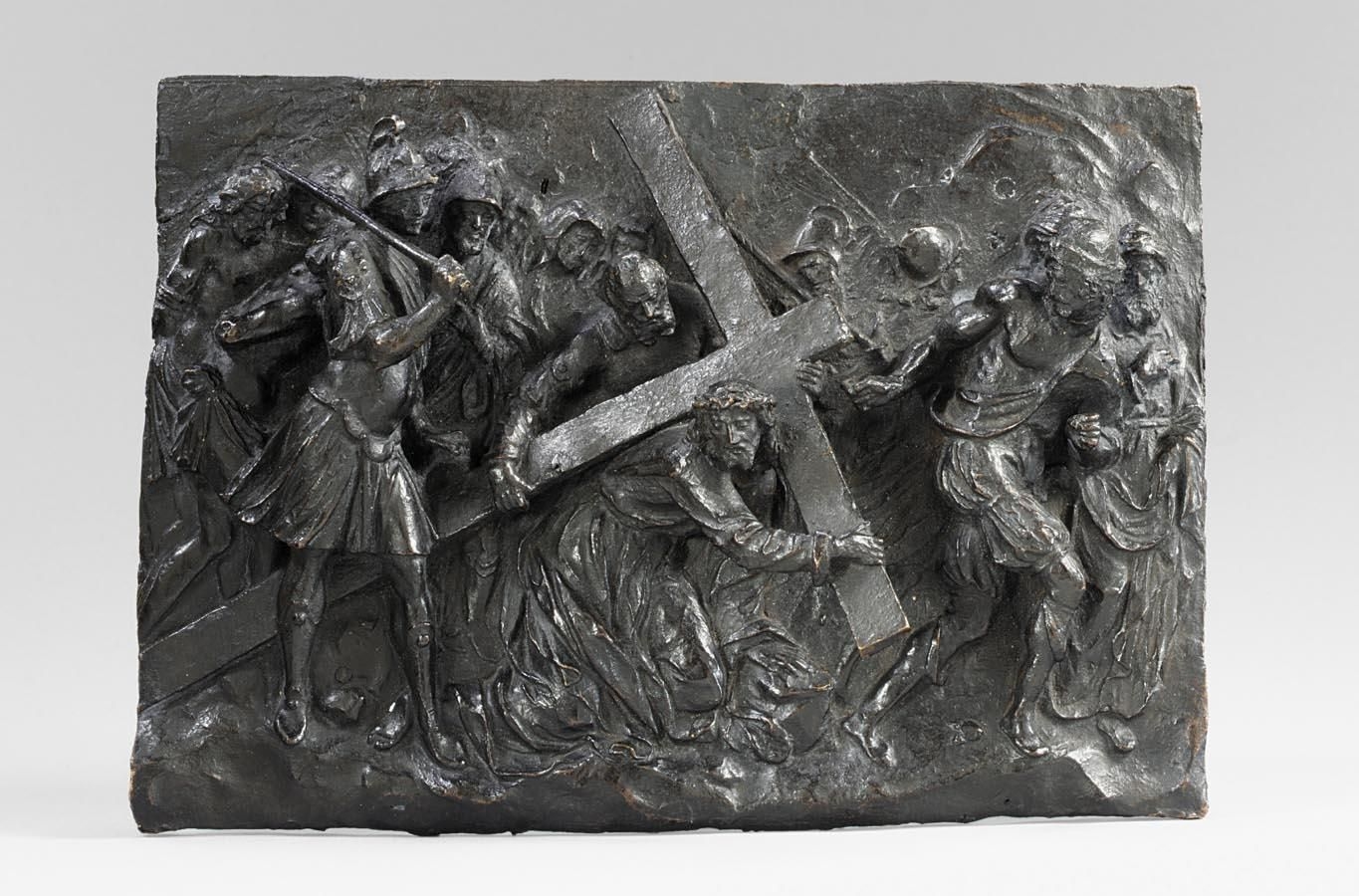 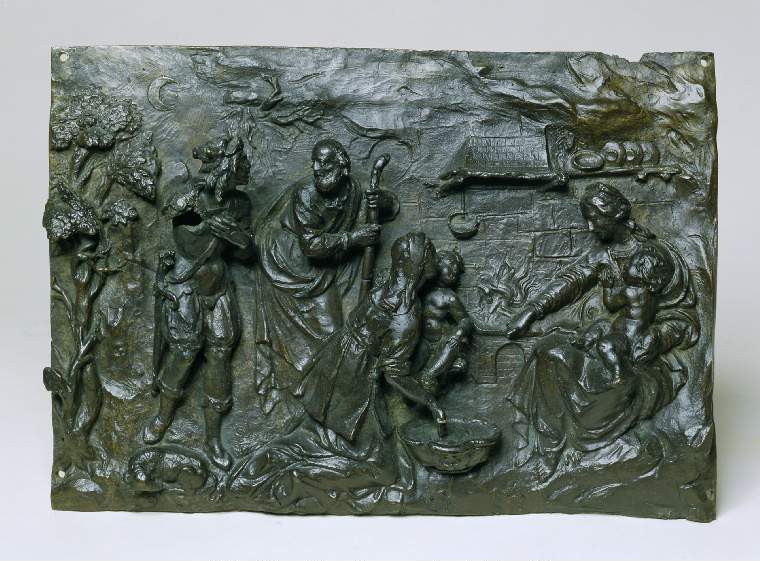 Sotheby's. 1988. European Works of Art and Sculpture.London: Sotheby's p. 118
, lot 283, a comparable relief of the Holy Family in the robber's house, there attributed to Ferdinando Tacca.
Fitzwilliam Museum, Cambridge

Posted by David Bridgwater at 06:14