The Busts of Richard Frewen by Roubiliac in the Christchurch and Bodleian Libraries, Oxford

in Christ Church Library and the Bodleian Library, Oxford.

Continuing the series of posts on Portrait Sculpture at Oxford University initially suggested to me by Dana Josephson.

Once again I must express my sincere thanks to him for making this work possible.

These two remarkable busts display the honest depiction of the 80 year old, near toothless Richard Frewen in old age. They should be compared with several other busts of medical men in their later years by Roubiliac including those of Richard Meade RS. (Marble in the Royal College of Physicians), William Cheselden R.S.and John Belchier RS. (Plaster in the Royal College of Surgeons) and the polymath Martin Folkes RS.(plaster British Museum, Marble at Wilton House).

For the excellent biog. of Frewen  available on line see The Life and Times of Dr Richard Frewen, Medicine in Oxford in the 18th Century by AHT Robb - Smith ed Margaret Pelling, 1972.

The 15th  Gideon de Laune lecture, given by Dr A. H. T.
Robb-Smith to the Worshipful Society of Apothecaries of London on 19 April 1972.

The son of Ralph Frewen. In 1693 Frewen entered Westminster School, whose headmaster was the famous advocate of corporal punishment Dr Richard Busby - the marble bust of Busby by Rysbrack is in the hallway at Christ Church College Library - there is another plaster version at Westminster School (photographs of the busby bust will appear shortly on this blog. Frewin went up to Christ Church College, Oxford University where he achieved his M.A. in 1704 and his M.D. in 1711.

In 1708 he is described at the foot of a Latin poem which he contributed to 'Exequiæ Georgio principi Danise ab Oxoniensi academia solutæ' (Oxford, 1708) as professor of chemistry; he was also in 1711 rhetoric reader in Christ Church.

As a physician he had an excellent reputation; he attended Dean Aldrich on his deathbed. John Freind's 'Hippocrates de Morbis Popularibus' is dedicated to him, and contains a letter from him (dated Christ Church, 20 July 1710), giving an account of a case of variolæ cohærentes which he had been attending.

In 1727 he was unanimously elected to the Camden Professorship of Ancient History, no other candidate having put their name forward.

Hearne relates that soon after his election he bought a hundred pounds' worth of books on history and chronology, 'on purpose to qualify him the better to discharge' the duties of the office.

He died 29 May 1761, having survived his children, who died young, and three wives, Lady Tyrell (widow of Thomas Tyrrell), Elizabeth Woodward, and Mrs. Graves, daughter of Peter Cranke.

His library of history and literature, consisting of 2,300 volumes, he left to the Radcliffe Library.

Much info above culled from Dictionary of National Biography.

Inscribed on the left hand side (proper) of the side of the base L.F. Roubiliac Sc.t ad vivum MDCCLVII and on the right hand side RICHARDUS FREWIN M.D. Aetat 80.
. 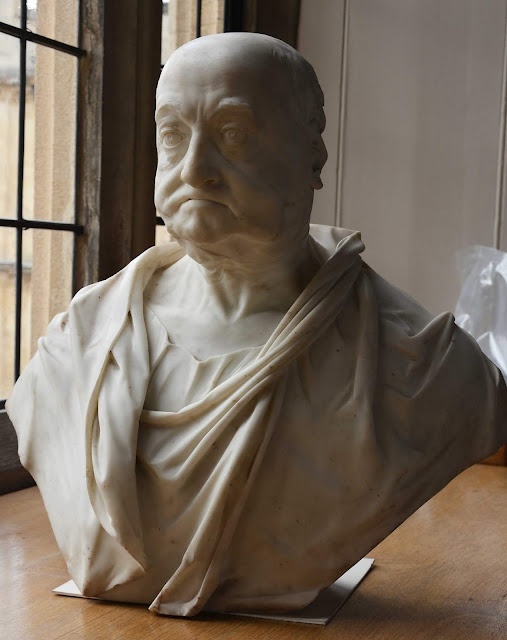 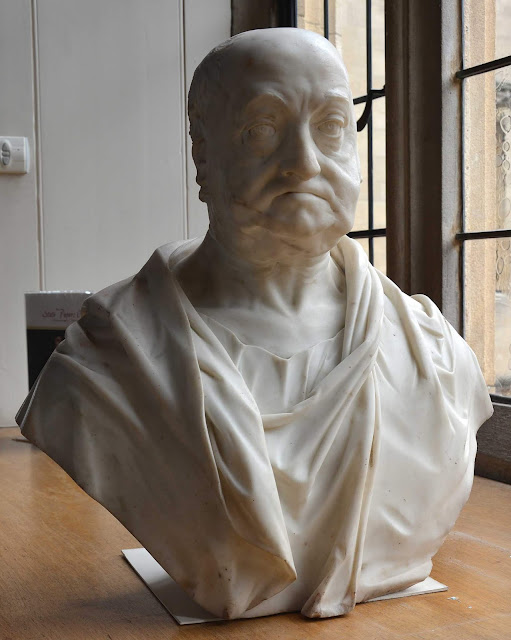 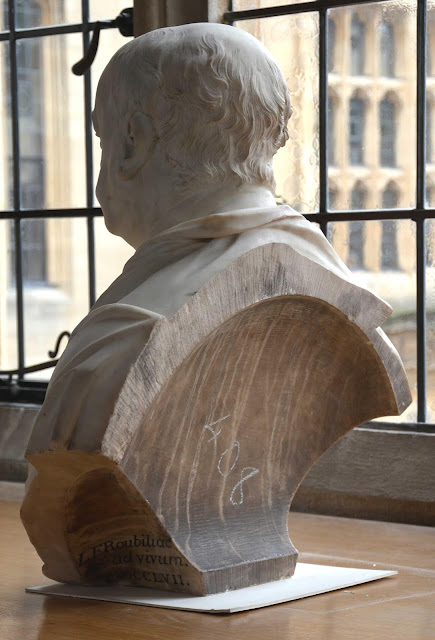 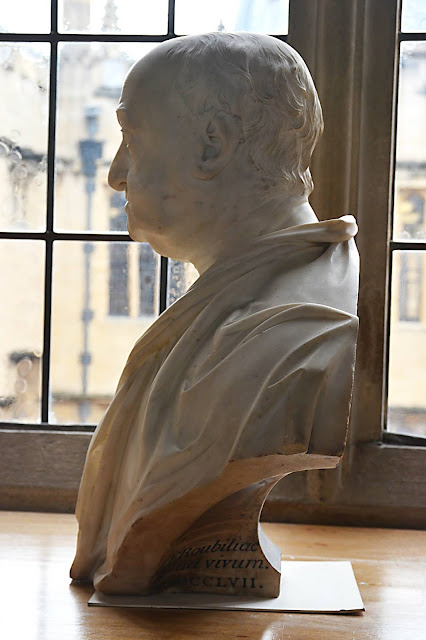 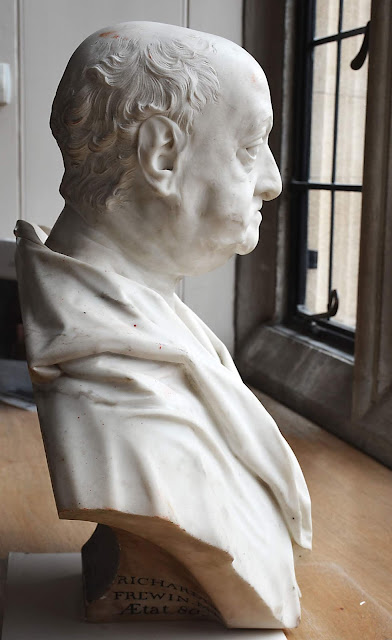 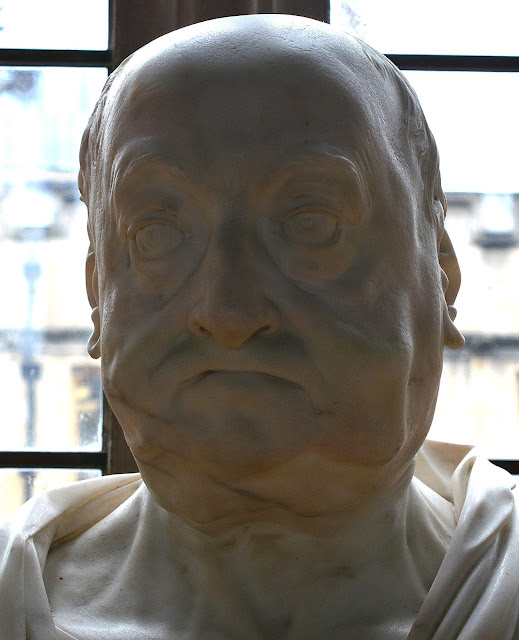 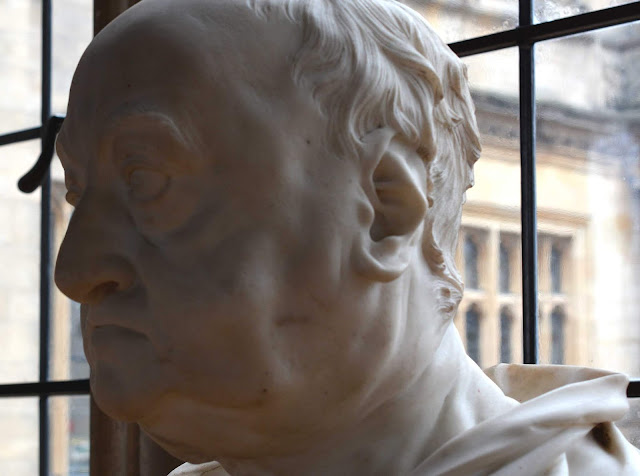 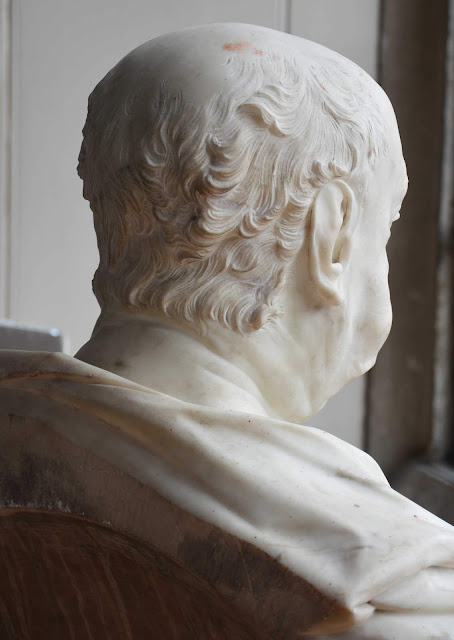 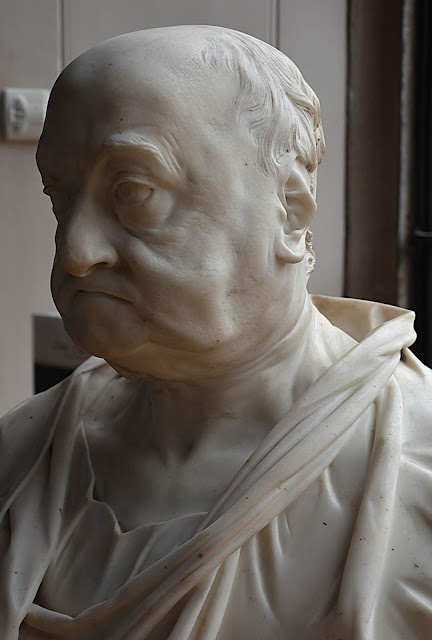 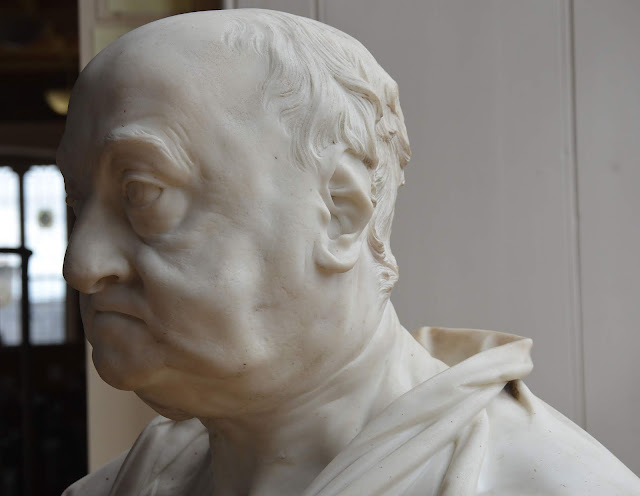 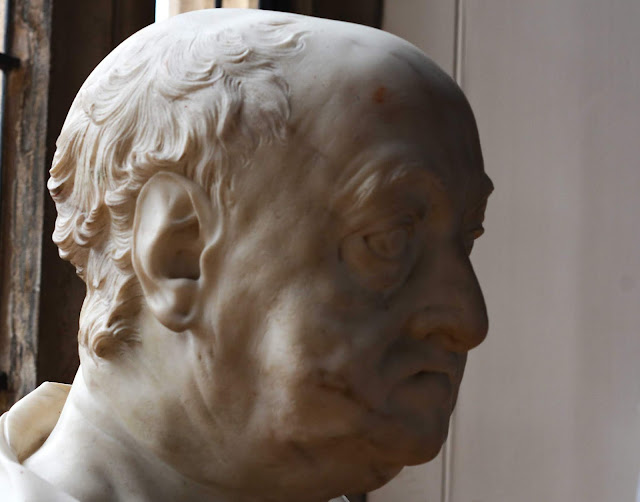 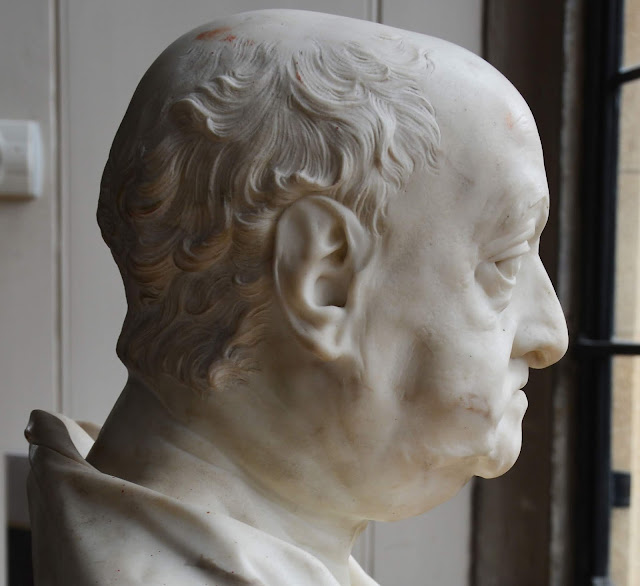 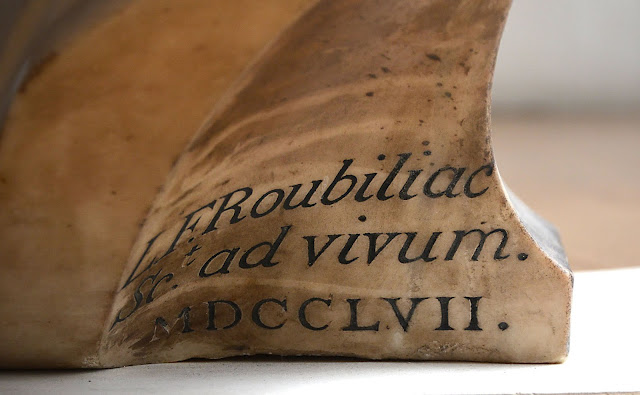 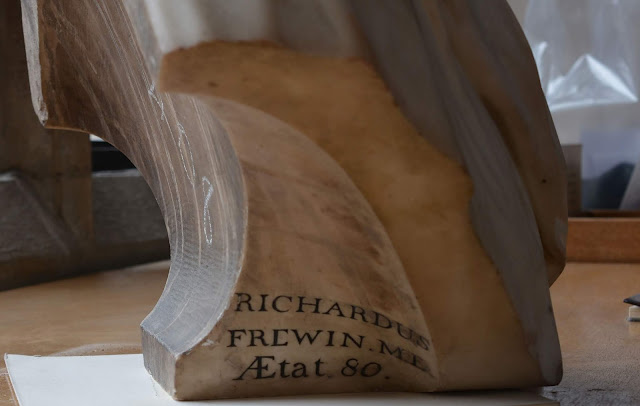 At some time this bust has been painted - probably in order to hide the damage sustained in a previous accident. There is evidence of the use of what looks like a plaster of Paris filler on the lower left hand (proper) front of the dress. 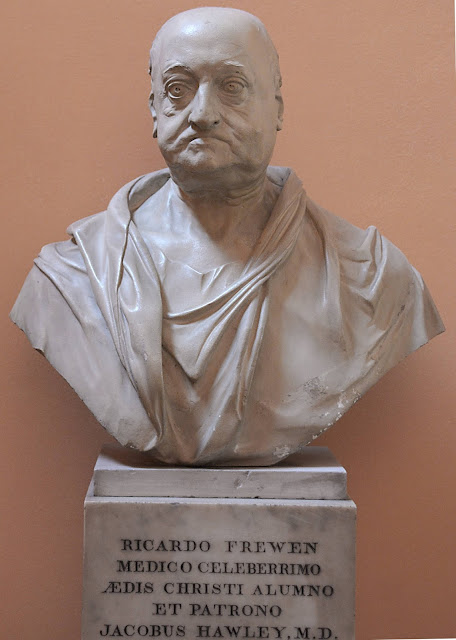 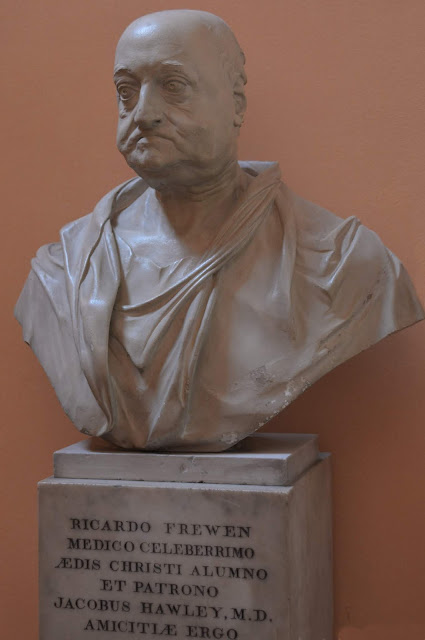 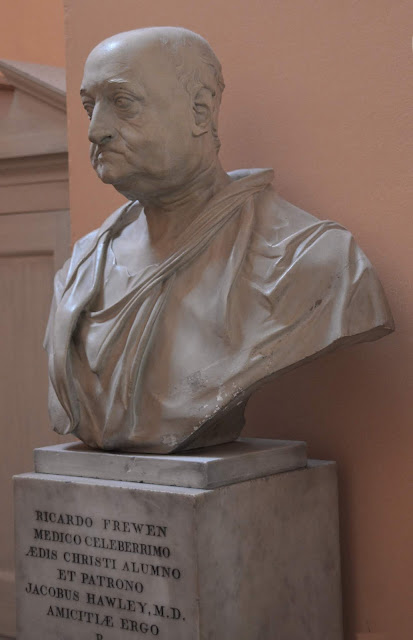 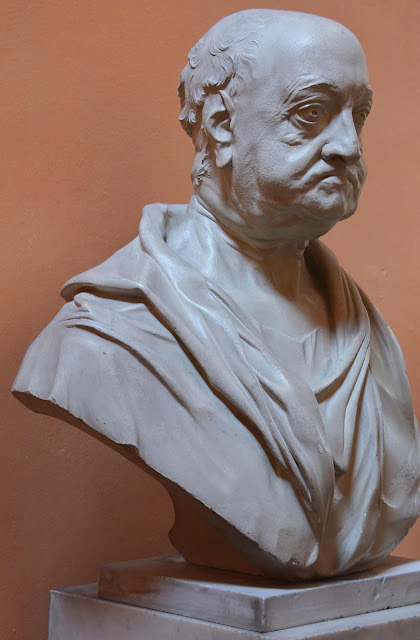 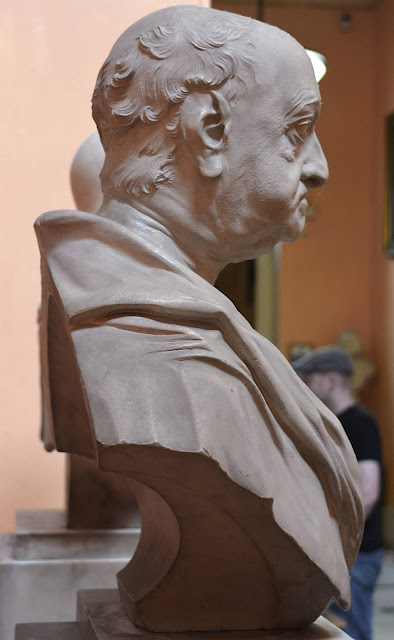 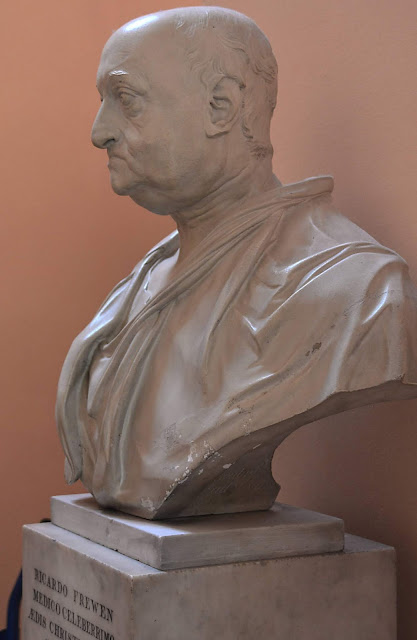 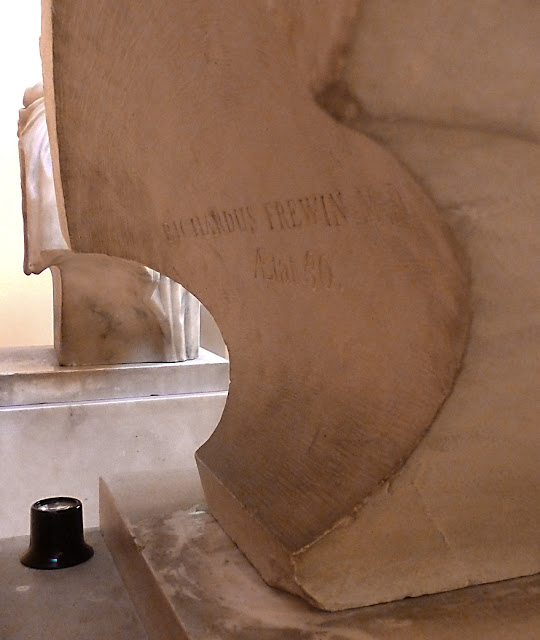 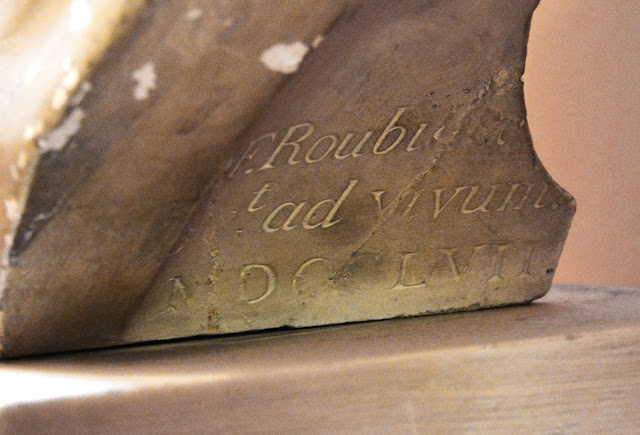 The break on the back of the base is obvious in this photographed. 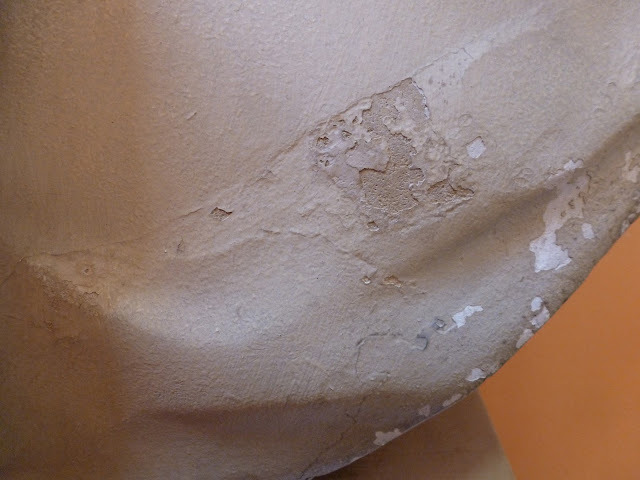 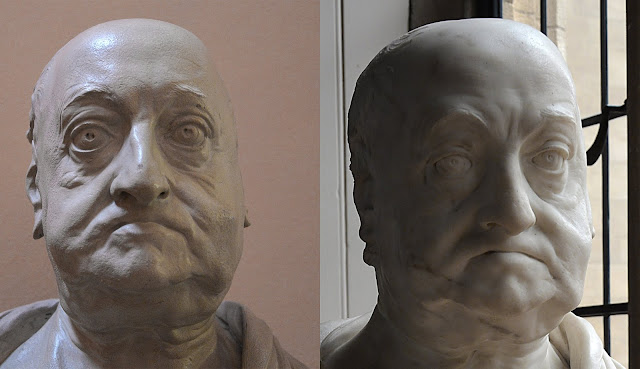 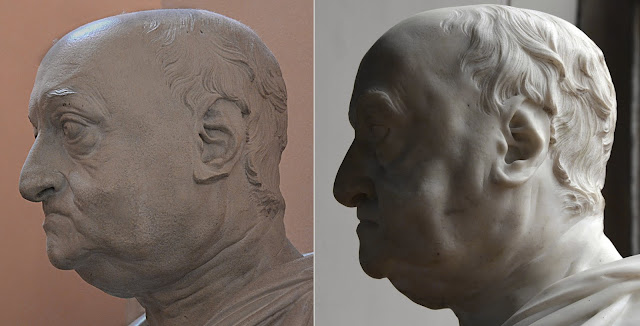 Originally the photographic collection of Bath City Archives - now the cash cow for the proprietor.

The website purposely publishes very low resolution photographs which are of very little use to the serious researcher  - the cheapest reproduction available of their photographs is £20.

Both the proprietor and Bath and North East Somerset  should be ashamed of themselves.

John Freind's 'Hippocrates de Morbis Popularibus' is dedicated to him, and contains a letter from him (dated Christ Church, 20 July 1710), giving an account of a case of variolæ cohærentes which he had been attending.

Posted by David Bridgwater at 07:42