John Locke.
The Busts and Statues.
by Michael Rysbrack. 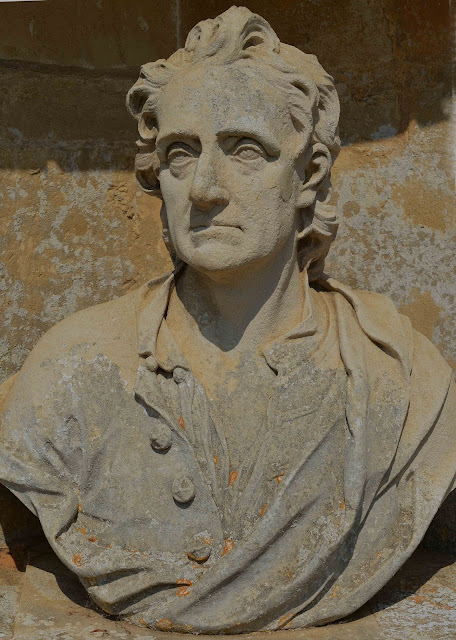 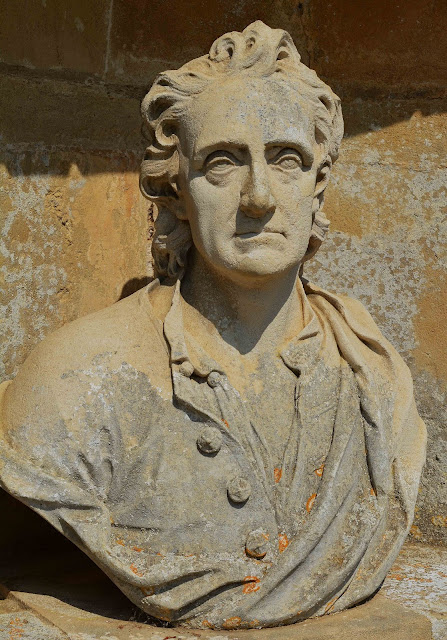 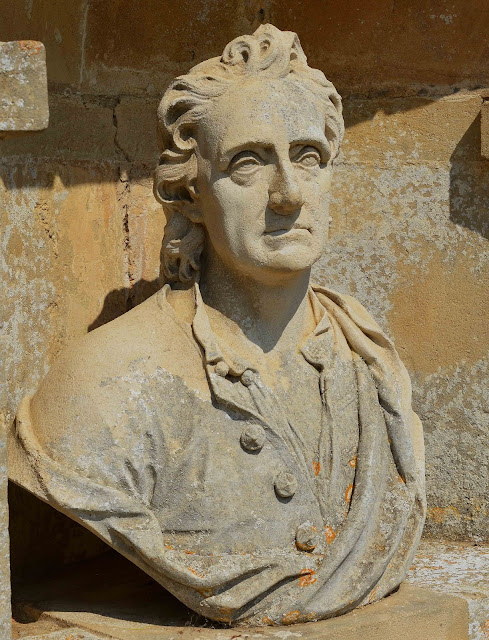 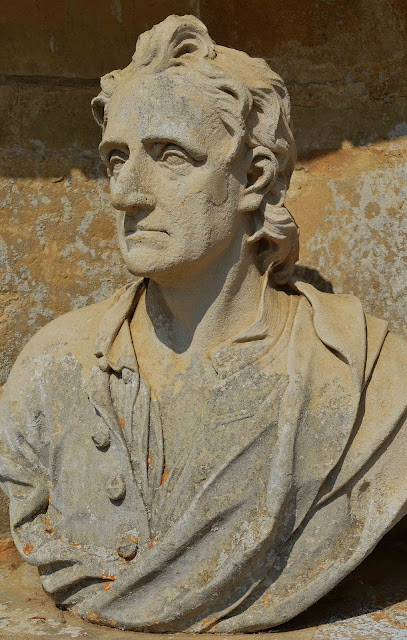 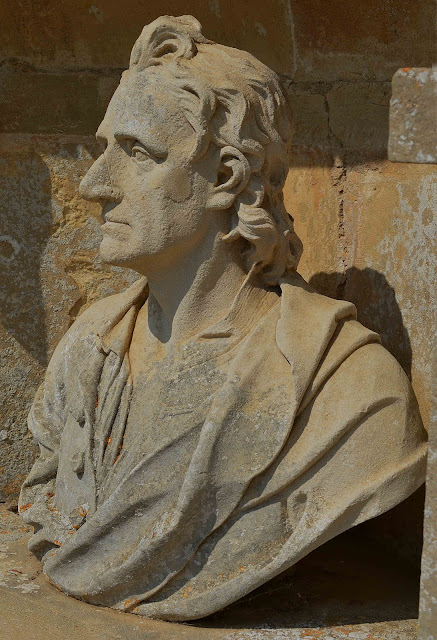 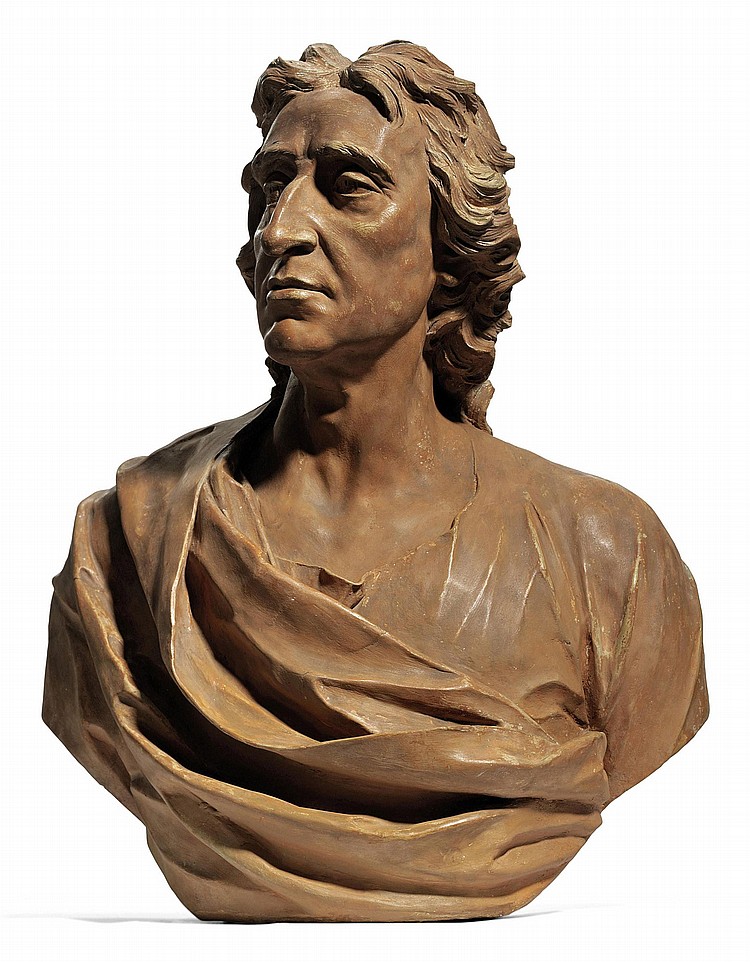 Included in the sale was a letter From Rysbrack to his Patron Lord Littleton, dated 31 July 1756, Discussing The Delivery Of The Bust.

The sitter facing slightly to dexter and with drapery about the shoulders.

The letter is inscribed: Sir./ I am heartily Sorry to Acquaint Your Honour, that I have not been able to do anything for you this Summer, having been so Extreamly busied, and really Sir when I am in my Room, I am always Indisposed, which makes me Chuse Excercise. The bust of Lord Bacon is not burned yet but I Shall Send it with that of Mr. Locke as Soon as it can be Spared, the Statue not being yet finished; I Shall have a Great Pleasure in Seeing you before I send any of the Other Busts, that You may give your Approbation Concerning them..... When I can possibly have an Opportunity to Begin the head of Sir Walter Raleigh I will take it in hand, but it is one of the Most Difficult in your Whole list to make it do well. I am Sir London With the Greatest Respect Vere Street Your Honour's Oxford Chapel most Obedient July 31st. 1756. humble Servant Mich: Rysbrack

Executed as part of a series of busts of historical figures for Rysbrack's patron Sir Edward Littleton in 1755.

This bust originally formed part of a series of 'worthies' created for one of Rysbrack's most loyal patrons, Sir Edward Littleton. Littleton had torn down his family seat, Pillaton Hall, and built a new one called Teddesley Hall near Stafford.

In a series of letters written by Rysbrack to Littleton first reproduced in 1932 and subsequently published in 1954 (Webb, op. cit., pp. 194-209; one of the letters was that included in Christies sale; the creation of this series for Teddesley is described in detail.

In a letter dated 12 February 1756, Rysbrack says that he has completed busts of Milton, Sir Isaac Newton, Locke and Sir Francis Bacon, although they have not been sent because the Bacon '...must be Dried first, and afterwards burned which cannot be done till summer, it not Being half Dry Yet. (ibid, p. 195).'

In July of that year the letter included in Christies sale of the Locke bust shows that the Bacon had still not been fired, but Rysbrack promised to send it along with the bust of Locke, as soon as the latter could 'be spared, the statue being not yet finished'.

The reason he was unable to send the Locke, although finished, was that he used the bust as the model for his full length marble of Locke, commissioned for Christ Church, Oxford (in situ).

The terracotta model for this statue is in the Victoria and Albert Museum (see below). In a letter dated 21 June 1757 Rysbrack informs his patron that 'I have according to Your Desire sent three Busts Yesterday by the Waggon namely, My Lord Bacon, Mr. Lock and Milton's, they are carefully packed up and I hope you will receive them Safe which will give me much satisfaction to hear...' (ibid, pp. 196-197).

The series of busts would eventually include Bacon, Sir Walter Raleigh, Shakespeare, Milton, Pope, Newton and Locke. These were supplemented by portraits of Sir Edward and Lady Littleton, Cromwell and the Duke of Cumberland, along with a terracotta model for Flora, and the terracotta model for the goat Rysbrack designed for Chiswick House, today in the gardens of Chatsworth, Derbyshire.

The busts, along with the letters relating to them, remained at Teddesley Hall until 1931, when Littleton's collateral descendant, Lord Hatherton, had them removed to London for cleaning. They were sold at Spink and Son after the exghibition in July 1932, at which point the bust of Locke was acquired by the Duke of Portland.

Spink's related illustrated catalogue by Mrs Arundell Esdaile ('The Art of John Michael Rysbrack in Terracotta') fully transcribes the letters and is otherwise comprehensive. She proposed that the undated one of Cromwell may have been the bust that Vertue saw in Rysbrack's workshop in 1732, which would make it the earliest.

The busts essentially comprised four pairs: Raleigh and Bacon, Shakespeare and Pope, Cromwell and Milton, and Newton and Locke. Lord Hatherton (the Littleton barony dating from 1835) consigned these -excluding Shakespeare- and other Rysbracks that his ancestor had purchased, with the related Rysbrack letters about them, to Spink's for exhibition and sale in July 1932.

. That of Shakespeare is unlocated but the V&A has one that may at least be a version.

The National Maritime Museum's Raleigh and Bacon were conceived as a pair and the most expensive at 25 guineas each, it was not started until the Bacon had been sent off in June 1757: the others were all 16 guineas.

These two, along with Rysbrack's Cromwell, were purchased for the Museum at Spink's by Sir James Caird.

The busts of Pope and Milton are now at the Fitzwilliam Museum, Cambridge.
see my post -

The Bozzetto/Maquette in the Victoria and Albert Museum.

In the Chapter Minutes for Christ Church College of 27 September 1754 it states "Willm Lock Esqre having intimated his intention of giving a statue of John Lock Esq., formerly a student of Christ Church and an ornament to this society, it is ordered that it shall be placed in any part of the library that Mr Lock shall think proper.

This Mr Lock claimed to be a relation of John Locke.

The maquette is dated 1755 which suggests that Rysbrack had been engaged for the project by late 1754 and is so close to the marble statue that it must be the final design. 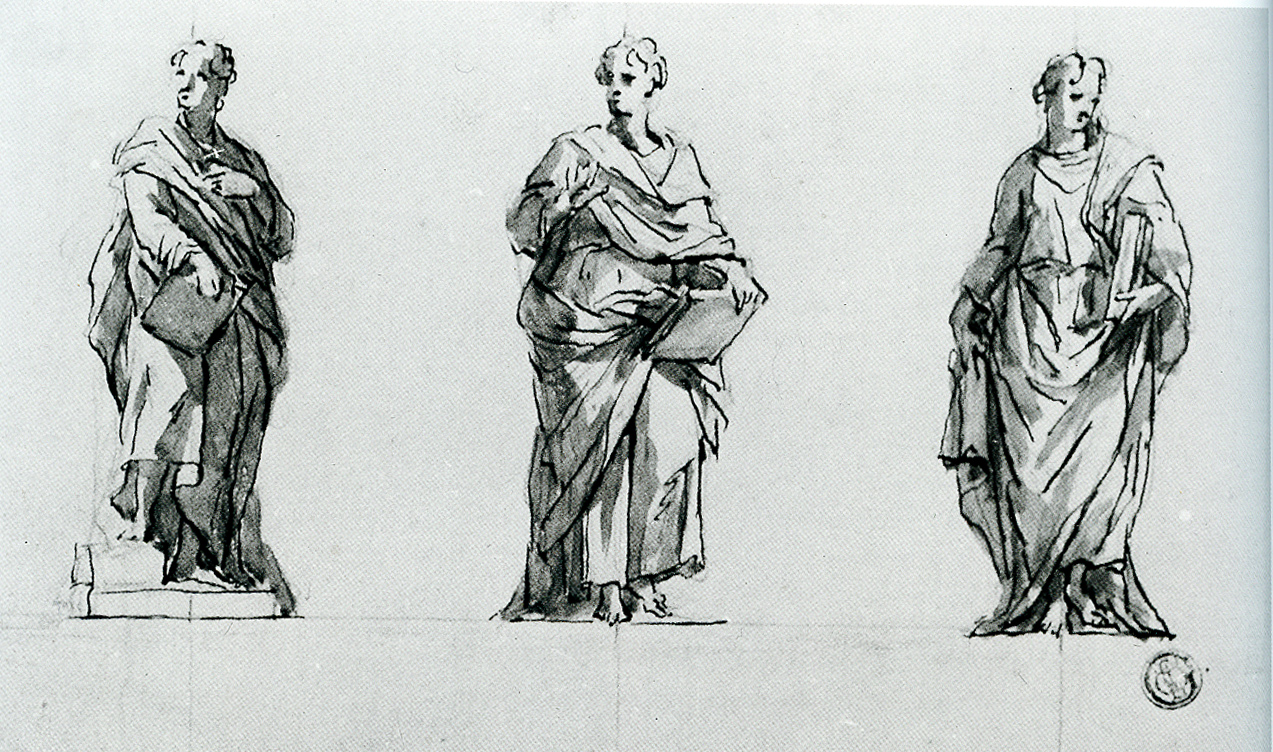 Preparatory sketches by Michael Rysbrack for the Statue of John Locke on the staircase at Christchurch College Library, Oxford. 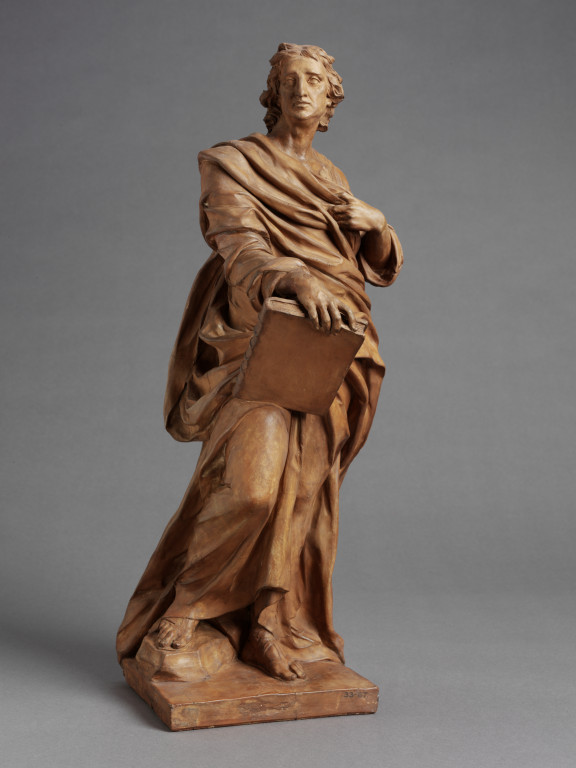 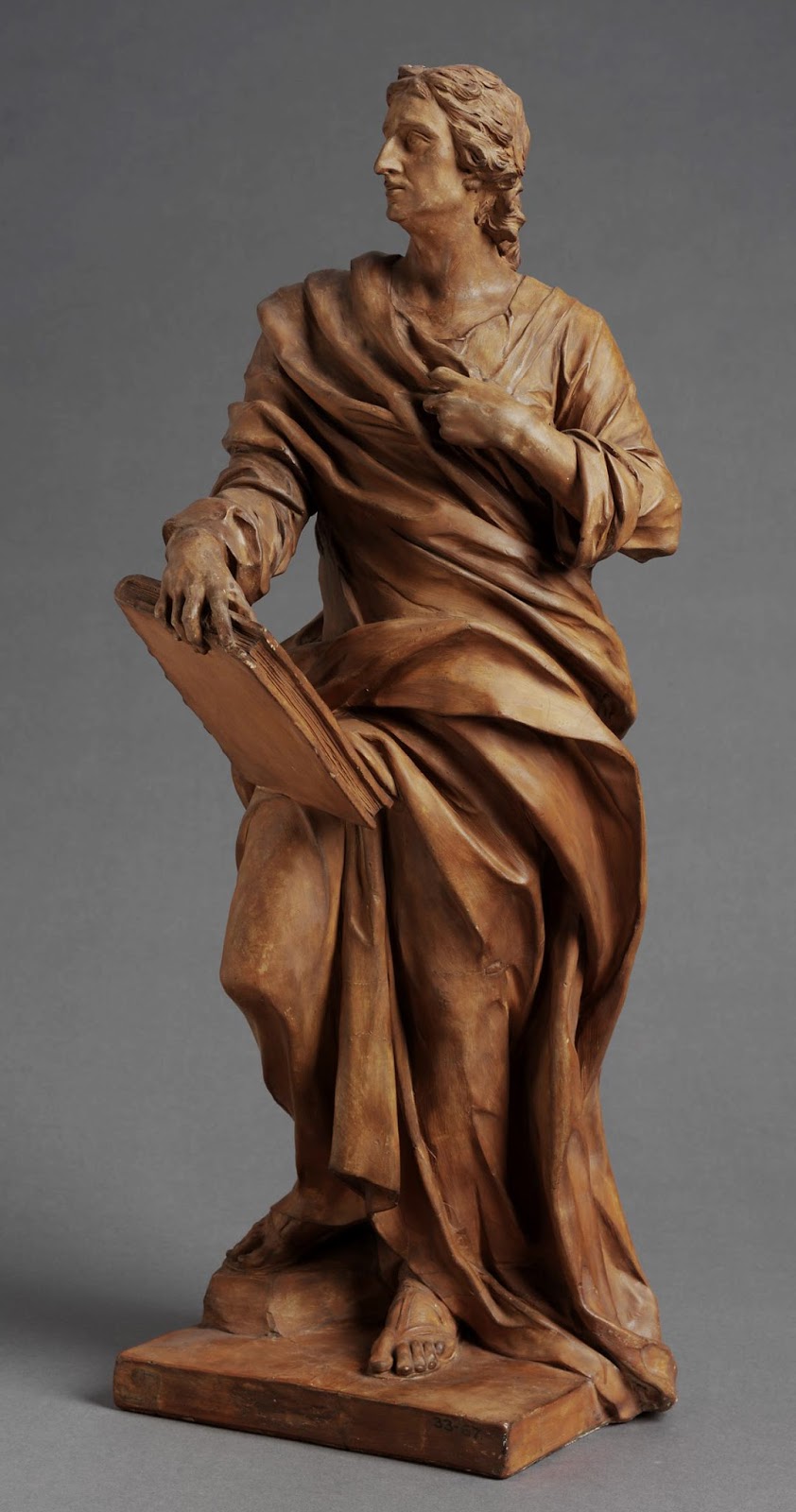 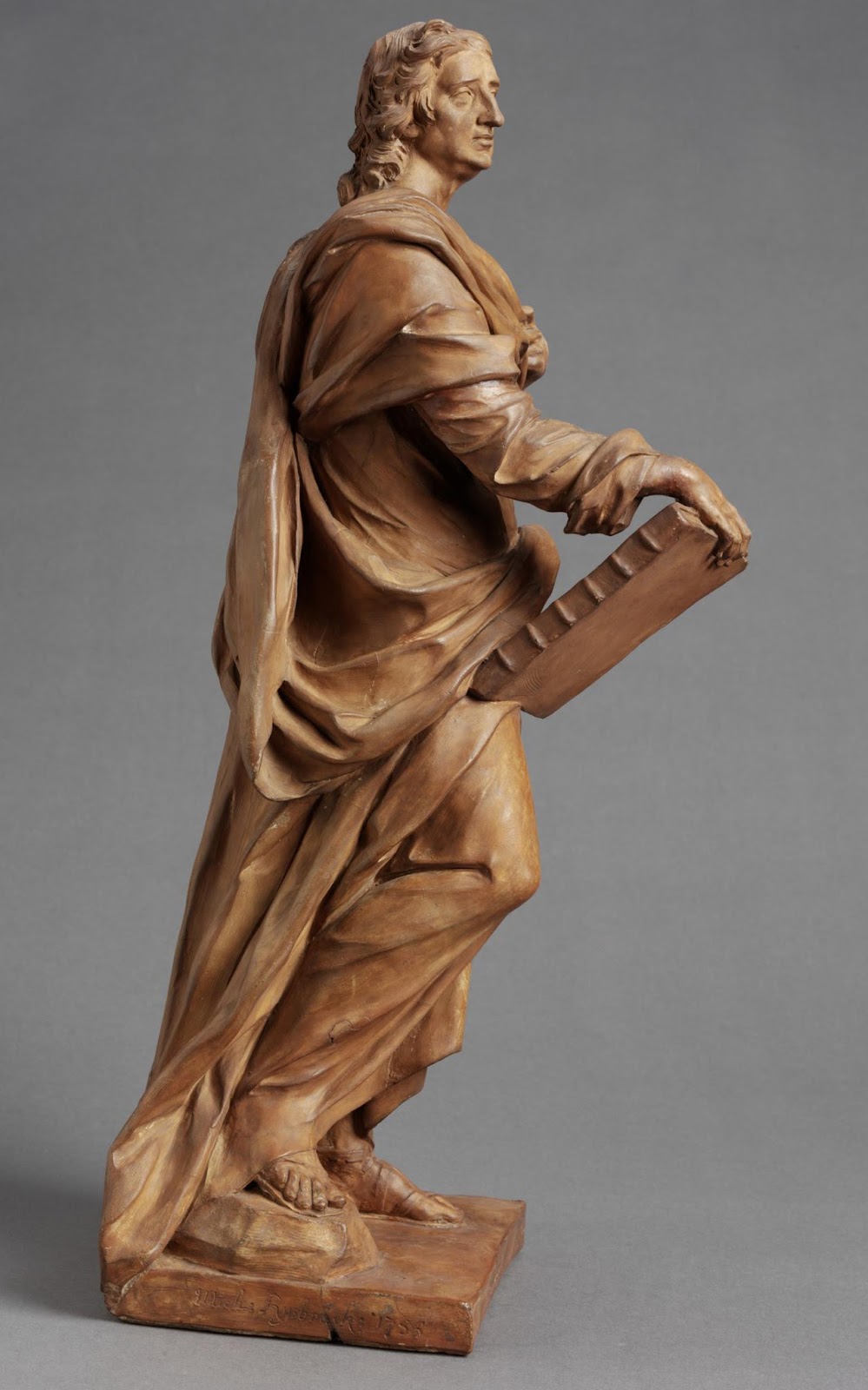 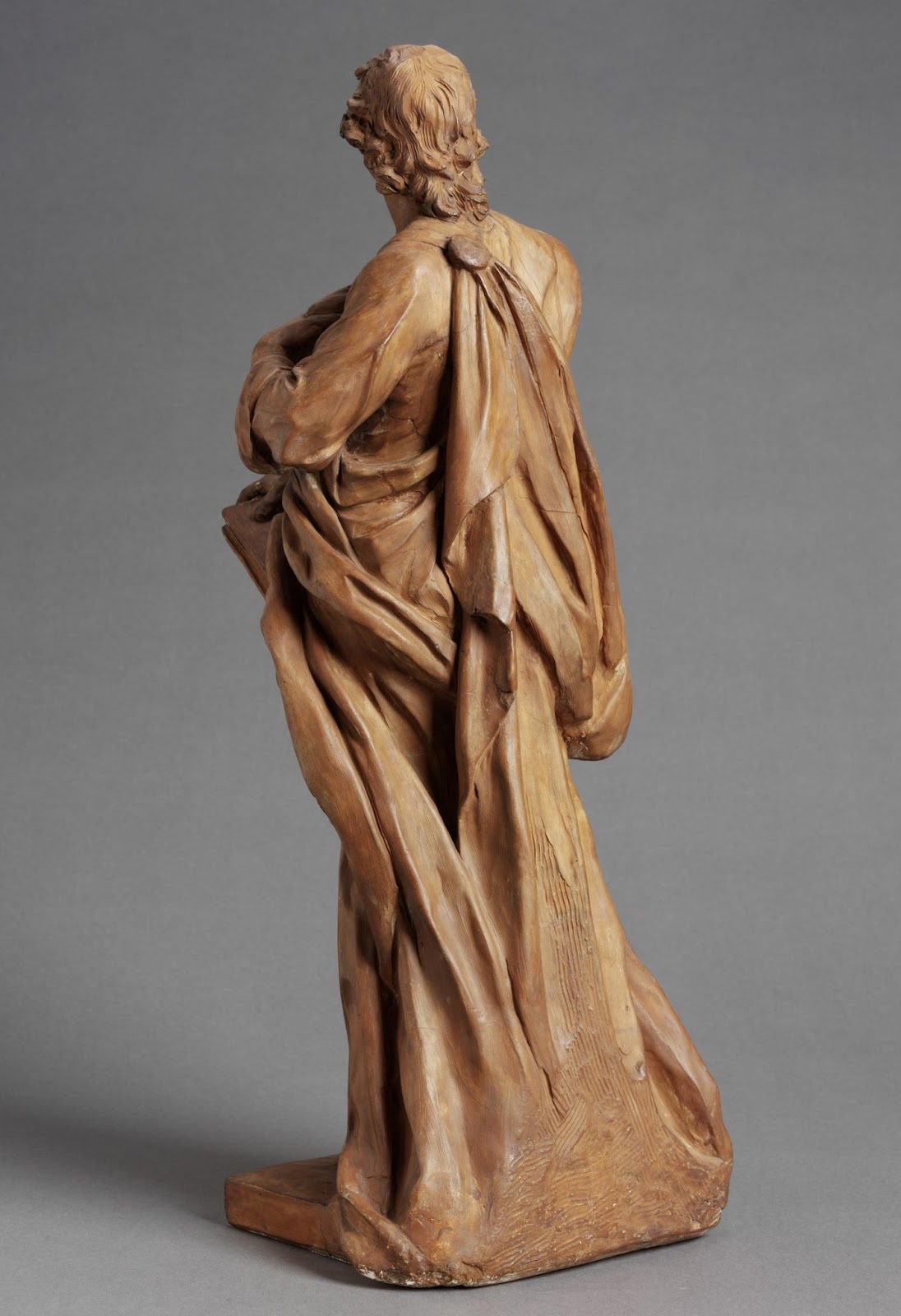 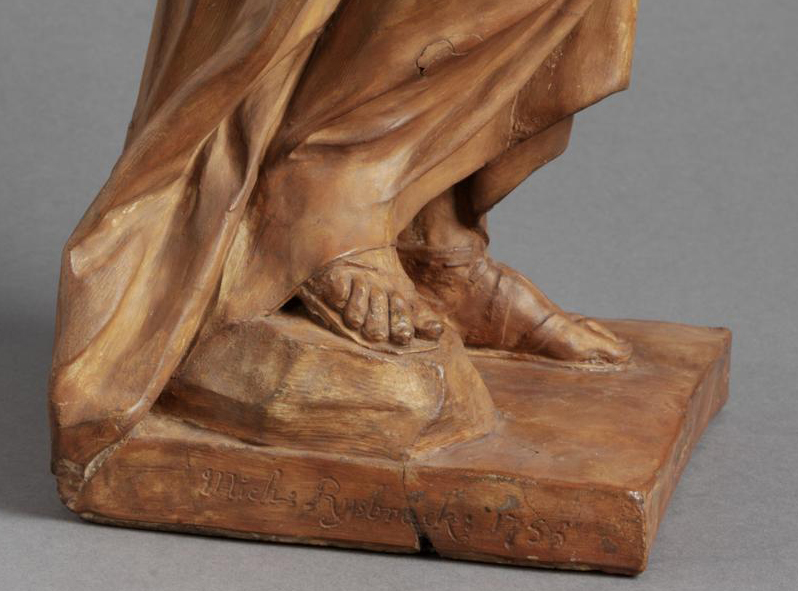 Possibly lot 56 ( a figure of Mr Lock for Oxford) in the second day's sale held on Rysbrack's retirement by Langford & Son, at their House in the Great Piazza, Covent Garden, London, 25 January 1766, under 'Models in Terra Cotta...A figure of Mr. Locke, for Oxford'.

Purchased by the Victoria and Albert Museum from Mr Myers in 1867 for £4 4s. Myers purchased the terracotta model of Shakespeare by Roubiliac from the same sale, which was also acquired by the Museum (V&A Mus. No. 32-1867).

The Public Advertiser 20 January 1757/8 states 'A fine statue of that great and learned man Mr Lock, who was educated at Christ Church, Oxon is finished by Mr Rysbrack, to be sent to that university'.

There is no record of what Mr Lock paid for the statue but there is a bill in Rysbrack's hand for the pedestal.

No. 38 Iron Cramps for to secure the Boxes at 4d each 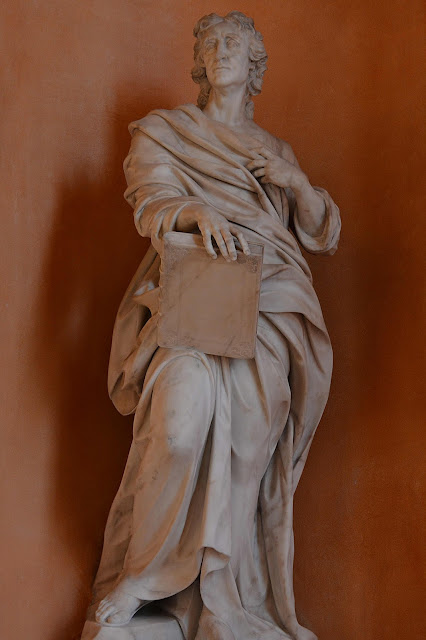 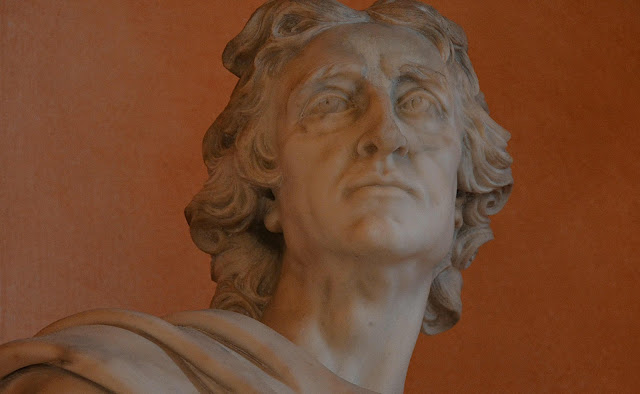 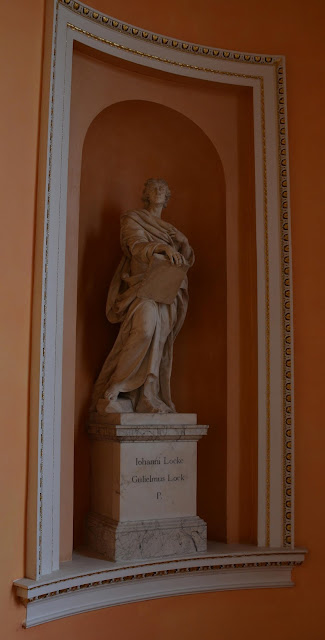 Photographed by the Author.

This statue was very difficult to photograph given its position in the niche over the staircase.

With many grateful thanks to the Librarians at Christ Church college Library, Oxford
for making me feel so welcome.
Posted by David Bridgwater at 07:28