Given to the College by R.H. Daubeny.

This is the first of a series of posts investigating the sculptural portraiture of John Locke in the 18th century, with particular reference to the John Cheere lead type bust at the Bodleian Library, Oxford and the marble bust by Edward Hodges Baily at Magdalen College Oxford.

This post forms part of a much wider study into the portrait sculpture at Oxford University, with particular reference here to the lead Cheere type bust of John Locke at The Bodleian Library and the marble bust of Locke after Roubiliac by Edward Hodges Baily at Magdalen College, Oxford.

I would also like to thank Dr Nicolas Bell of the Wren Library, Sir David Clary, Lady Heather Clary and Rachel Mehtar at Magdalen College, Oxford and Stephen Hebron of the Weston Library for making these posts possible.

The two busts of Locke and Bacon by Hodges Bailey after Roubiliac are noted as being in the Library at Magdalen College in 1866 in The Eclectic Magazine of Foreign Literature, Science... Vol. 4; vol.67.

There is a marble bust of Newton copied from the bust by Roubiliac in the Wren Library now in The National portrait Gallery - it differs slightly from the original in detail (as do both of these busts) in that the sculptor has omitted the inner chemise. It is also dated 1828 (see below).
___________________

Edward Hodges Baily was a pupil of John Flaxman and was principally known and regarded for his neoclassicism, especially his poetic works, such as Eve Listening to the Voice (Victoria and Albert Museum, London). He was also an experienced portraitist, producing over 130 portrait busts in his career, and applied for numerous public commissions for portrait statues, including an unsuccessful bid to carve the statue of George Canning in Liverpool Town Hall (Baily’s model is in the Bristol Museum and Art Gallery). In 1839 he won the commission to carve the statue of Admiral Lord Nelson for the top of the column in Trafalgar Square, the work for which he is best remembered.

For a more in depth biography see


Surprisingly although there are a number of busts existing of John Locke by the leading sculptors of the early to mid 18th century, John van Nost I, Guelfi, Peter Scheemakers and Michael Rysbrack there are none recorded to be by Louis Francois Roubiliac.

The only reason we have to suspect that Roubiliac also made a version of a bust of John Locke is that the marble bust of Locke at Magdalen College, University of Oxford has inscribed on the back -

Copied by E.H. Baily
From the Original by
Roubiliac.

It is paired with another bust by Bailey of Francis Bacon which is also derived from the Roubiliac model in the Wren Library, Trinity College Cambridge, the terracotta prototype is at the British Museum, one of the busts purchased by Dr Matthew Matey at the posthumous sale by Langford's of the contents of the Roubiliac Studio in St Martin's Lane in 1762, the finished marble is at the Wren Library Trinity College, Cambridge. (see my next post).

Whilst it is always possible that Edward Hodges Baily was mistaken about the author of the original bust, I believe that this is unlikely, especially given that it has always been accompanied by the bust of Bacon copied from Roubiliac.

To my knowledge there are four marble busts of John Locke extant all of which are very close to the Hodges Bailey version - none are signed and none have a provenance going back to the 18th century.

There are slight difference in that the mantle on his left hand (proper) shoulder is missing and the detail of the shirt and waistcoat where the buttons and buttonholes is missing on the Oxford version but the detailed carving of the hair is very close.

There is ample evidence available to show that the original version of this bust is of 18th century origin with the existence of several plaster busts and a lead bust, which were cast or derived from models made in two sizes in the workshop of John Cheere (1709 - 87) at Hyde Park Corner, which flourished from 1738 until the sale of its contents 1788. It is possible that these busts were carved by John Cheere or in the workshop of his brother Henry Cheere but there is no record.

I will stick my neck out here and suggest that the original of this bust of Locke was probably from the studio of Roubiliac, especially given the quality of the marble bust of Lock which appeared at Sotheby's, London, Lot 148 on 23 March 1971 described in error as after Rysbrack. Unfortunately I only have a very poor photocopy of this bust and has since disappeared - hopefully it will reappear soon!

I cannot be certain but a letter published in Country Life Magazine of 17th March 1960 which asked about the subject and its author, would appear to show this same bust.

There is another version of this bust at the Kelvingrove Museum Glasgow, and there are two further examples in private collections.


I have attempted to put the various versions of the busts of Locke into some sort of order for this blog.

The first Lead bust - probably a version of the bust now at Yale Centre for British Art New Haven Conn. USA mentioned in the van Nost I sale catalogue of April 1712.

The Michael Rysbrack Portland Stone bust now in the Temple of Worthies at Stowe, carved for an earlier building at Stowe in 1729.

The bust by the execrable Guelfi from Queen Caroline's Grotto, c 1730, now in the Royal Collection.

A bust possibly by Roubiliac - perhaps that sold Sotheby's 23 March 1971 (photo - see below). There are probably at least 4 versions of this bust extant but none with a secure 18th Century provenance including -.

Various plaster busts in two sizes and a lead bust probably by John Cheere all based on the 'Roubiliac' type bust.

Another version of the Scheemakers bust of Locke (attributed incorrectly to Guelfi) was sold at Christie's September 2013 possibly that sold in Scheemakers sale 1756.

Another Rysbrack version of 1756 (the terracotta for Lord Lyttleton), which was unsold at Christie's in December 2010, the form of this bust was used again in full length statue at Christ Church, Oxford.

These busts are all easily distinguishable from each other. 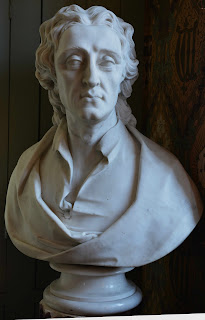 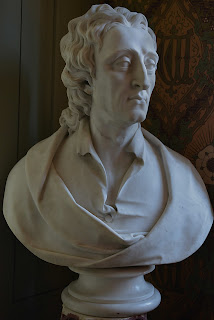 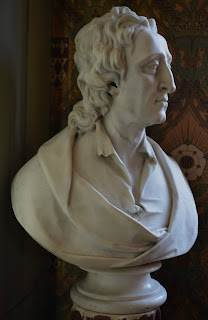 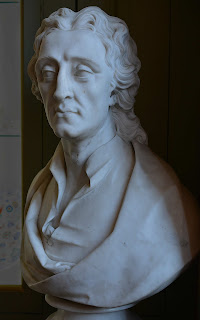 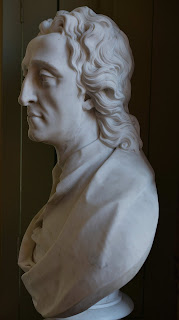 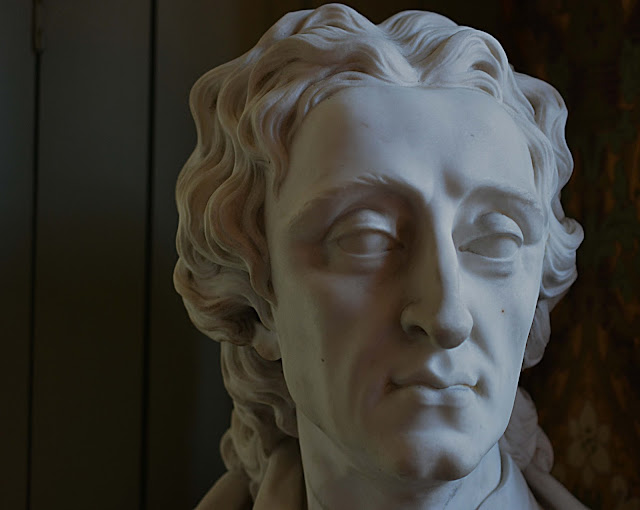 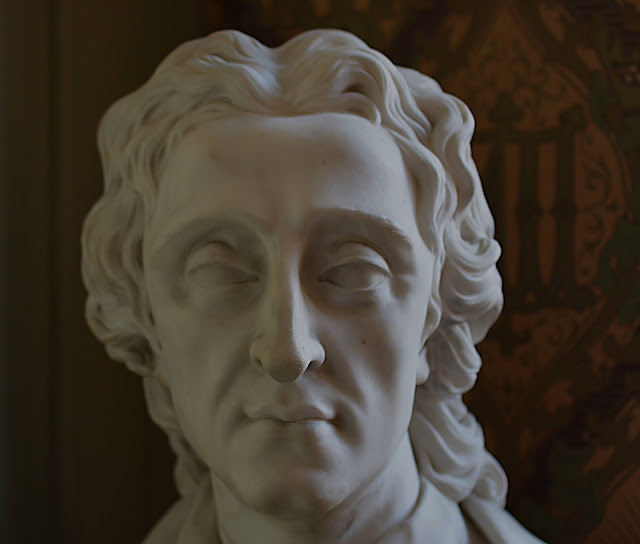 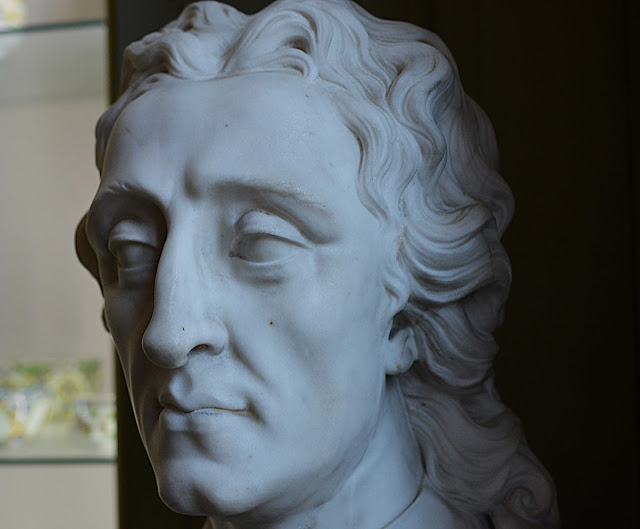 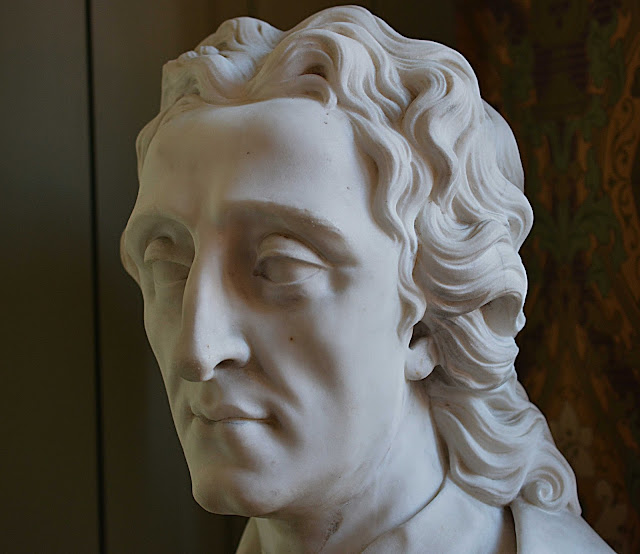 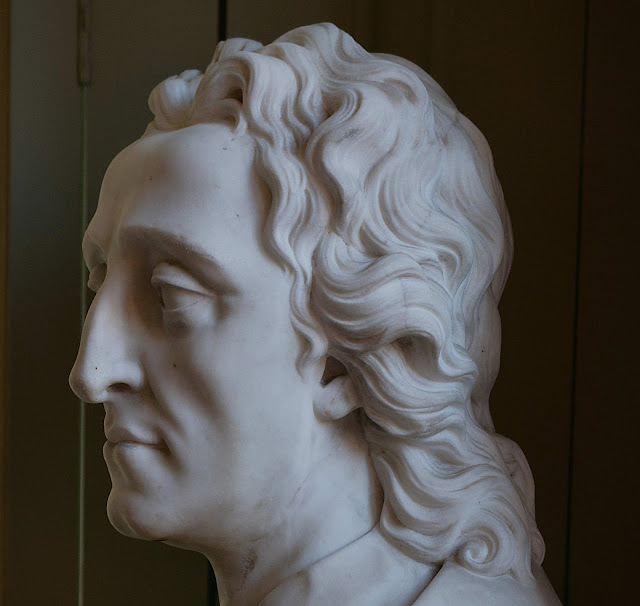 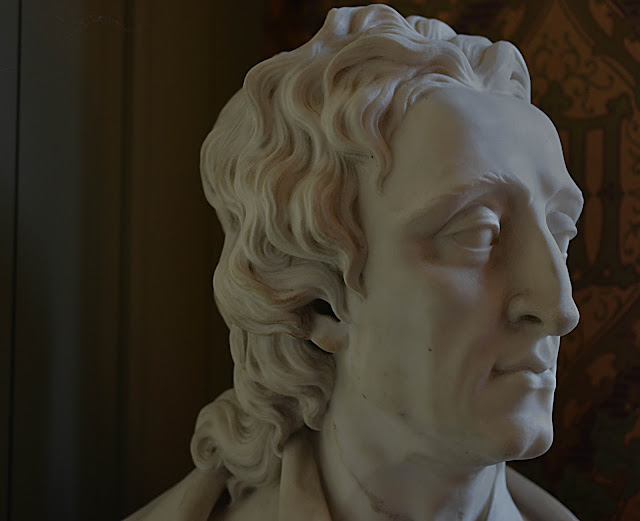 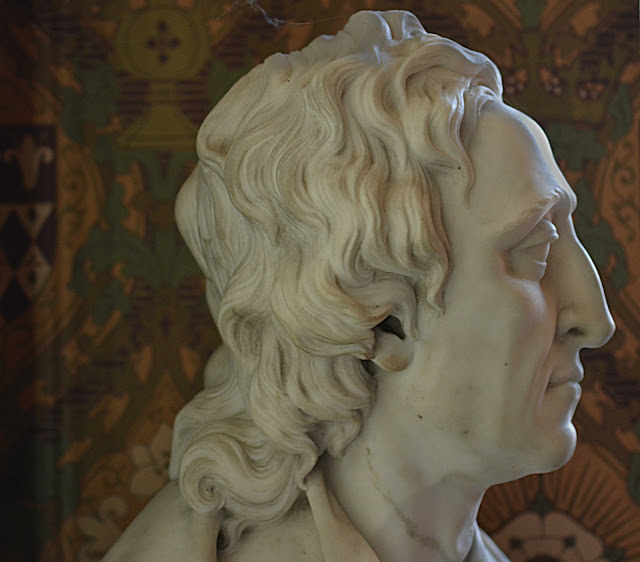 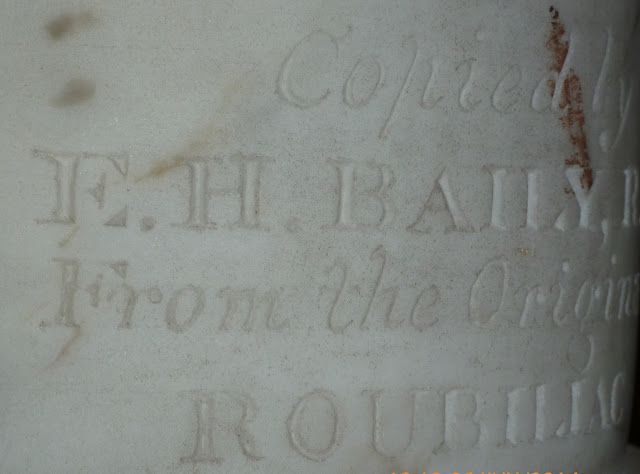 All the Photographs above taken by the author.

I am very grateful to Rachel Mehtar of Magdalen College, Oxford for organising the visit to the President's Lodgings at Magdalen for me and to Professor David Clary and his wife Heather for allowing me into their home and for being so welcoming.

There are perhaps at least 4 versions of this bust.


The Marble bust sold to the Glasgow Museums by Mrs WM Thomson in 1961 .

The Marble version at Westminster School. 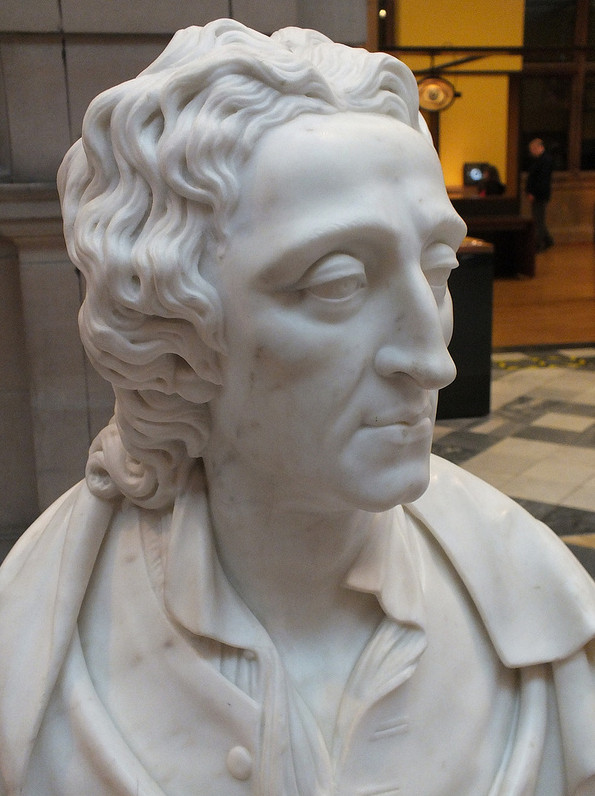 This image of the Kelvingrove marble bust retrieved from the web.


This is almost certainly the bust illustrated below .


Note from a curator at Kelvingrove

This sculpture was purchased from Mrs. W.M. Thompson (vendor), Northumberland in 1961 and came from the Runciman Collection? with an attribution to either Rysbrack or Guelfi. At that time, Dr Whinney at the Courtauld Institute was consulted and she leaned more to Rysbrack, thinking the sculpture was “too good” to be by Guelfi. But she also thought there was a possibility it could be by Roubiliac...

The Runciman Collection presumably refers to that of William Ist Viscount Runciman of Doxford (1870 - 1949). He was the son of Walter Runciman First Baron Runciman self made shipping magnate of South Shields.

Doxford is in Northumberland. 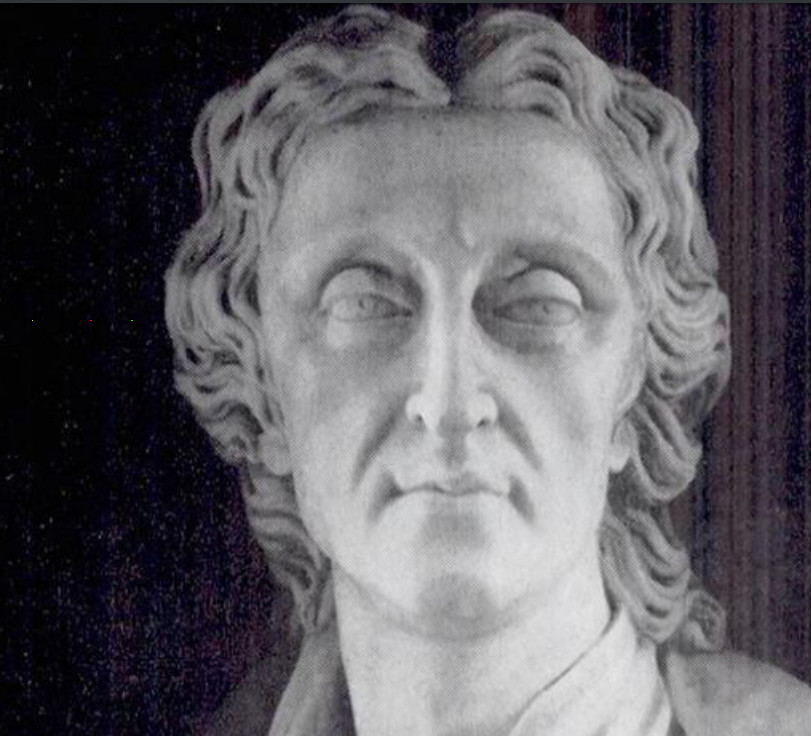 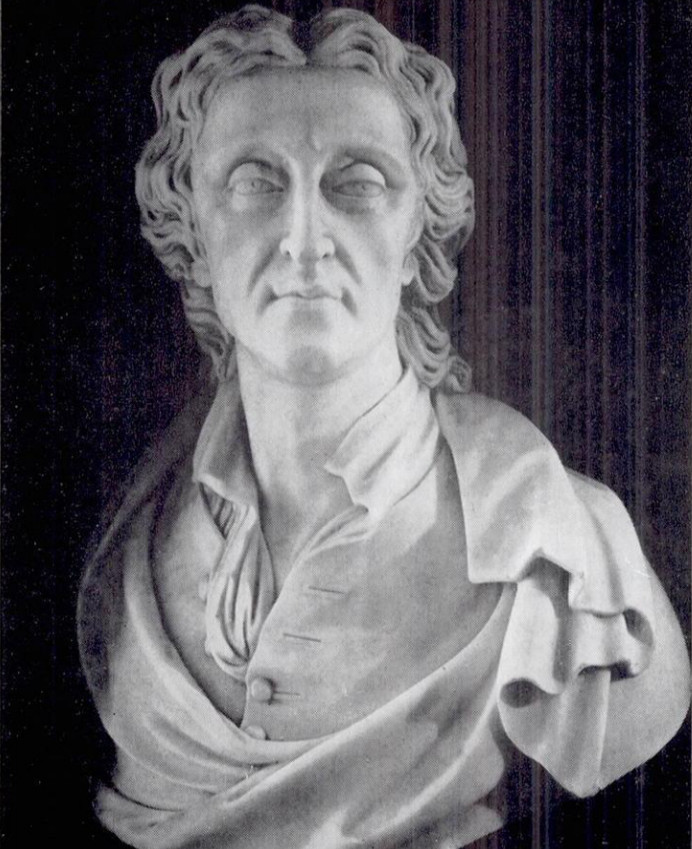 The three images above courtesy Country Life Magazine of 17th March 1960.
showing what appears to be the Kelvingrove bust .

The cutting of the eyes is the same.

I am very grateful to Sarah Hart, Library assistant at Country Life Magazine for finding and supplying me with this extract. 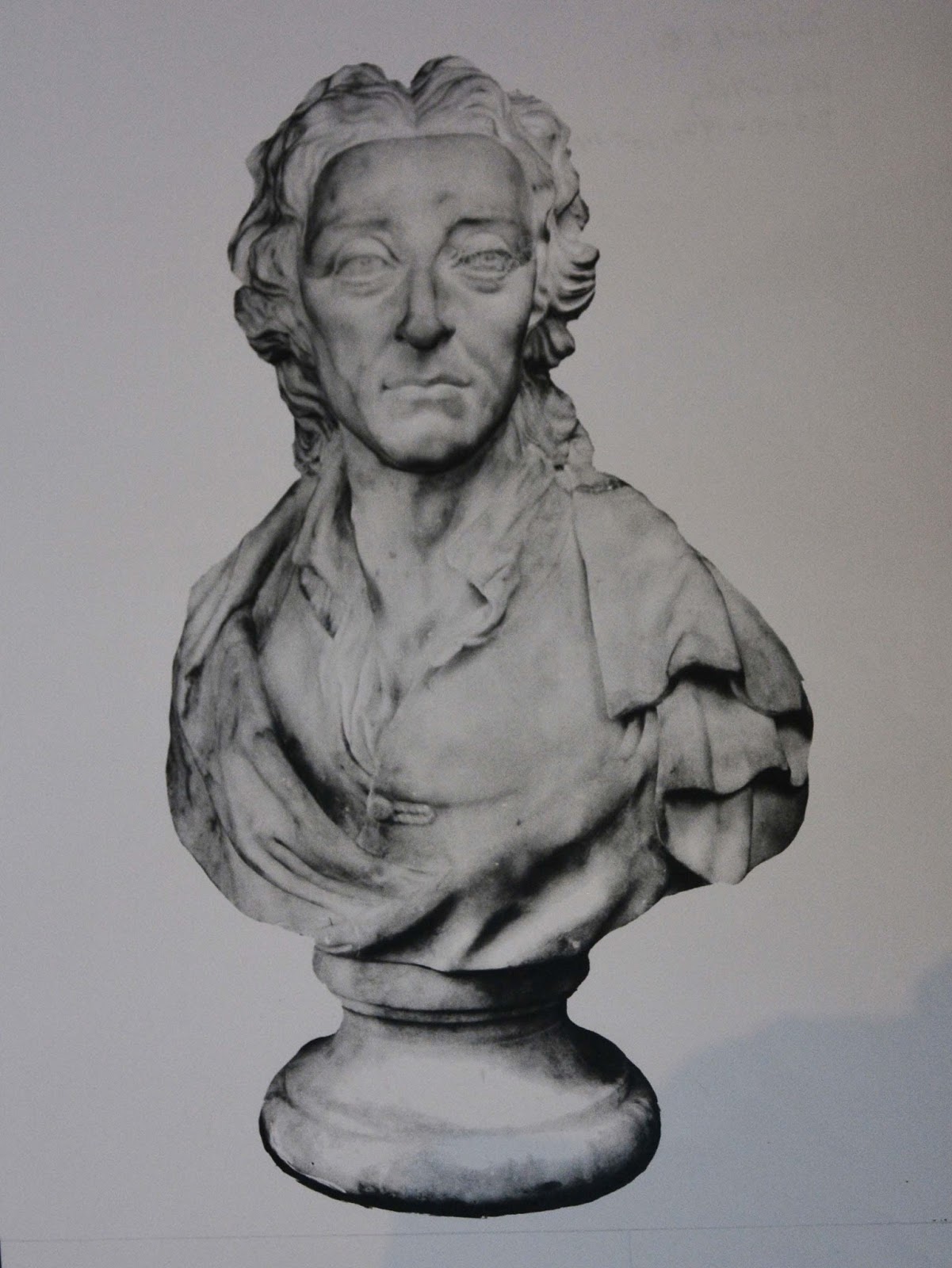 Photocopy of a photograph of a marble bust of John Locke
sold Sotheby's, Lot 148, on 23 March 1971.
The location of this bust is currently unknown.
I would suggest that this might be the original by Roubiliac

The very obvious quality of this one shines through even though the image above is taken from a photocopy. 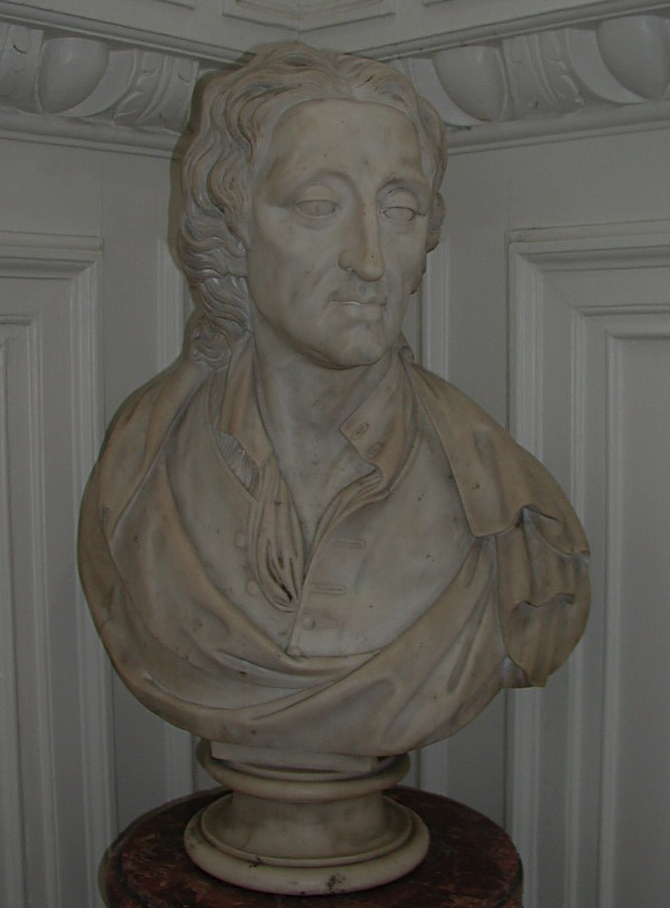 This is possibly the bust illustrated below.


There is a photograph of the Philllips / Genning sale Marble bust in the Heinz Archive of the National Portrait Gallery.
Unfortunately they jealously guard their holdings and you are under strict instructions not to use the photographs from their very useful archive, although they do allow you to have photocopies

Again wrongly attributed to a model by Rysbrack.

This looks very like the Westminster School bust with the rectangular support between the turned marble socle and the base of the bust.

The Original Pencil and Wash  Drawings and the descriptiona above from the Welcome Library Collection.

I will be posting on the Westminster School Bust of Locke shortly. 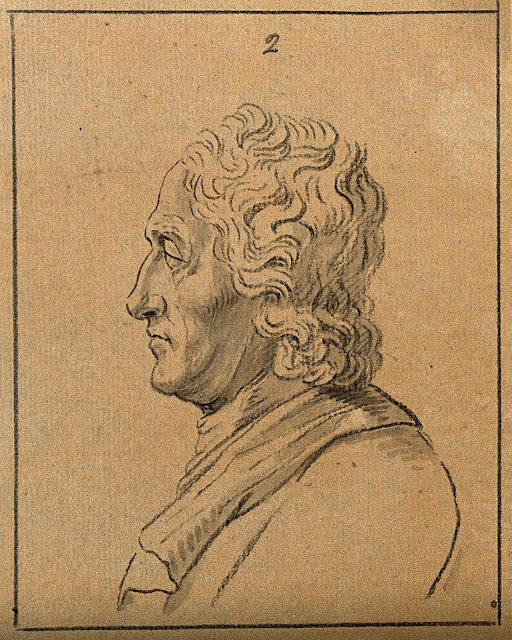 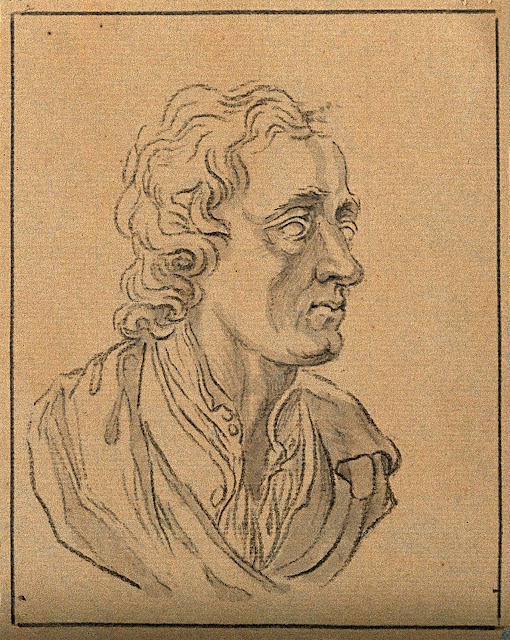 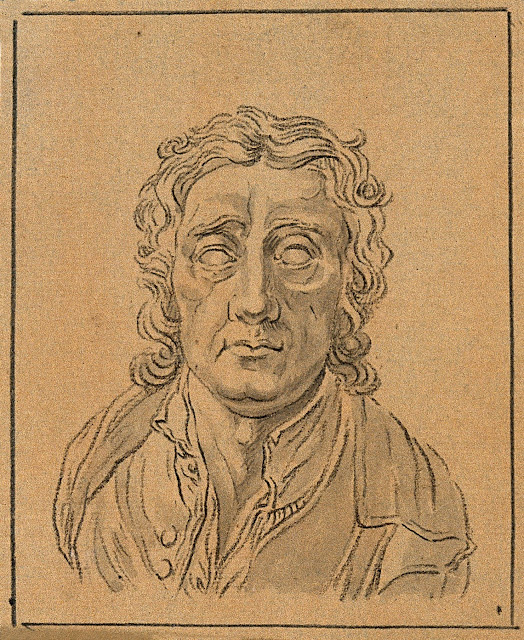 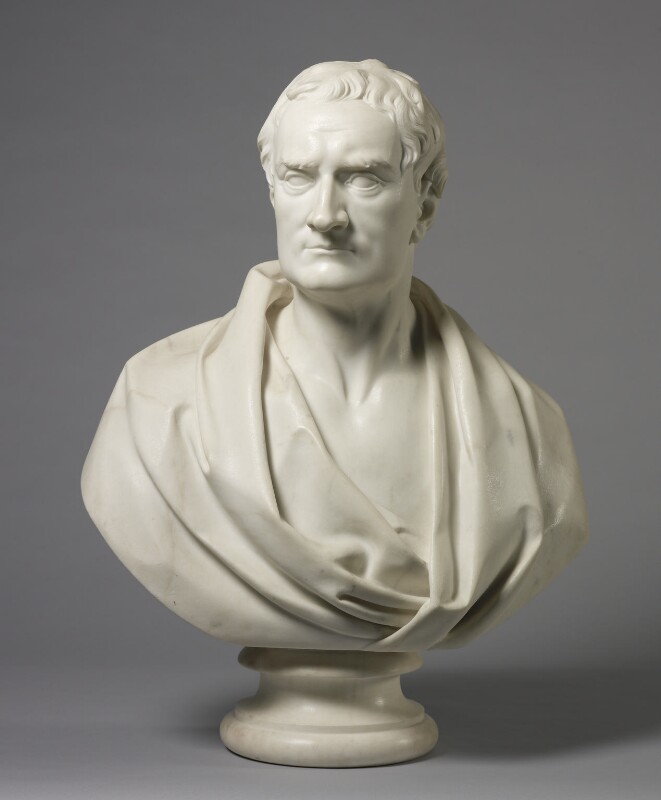 Commissioned by Robert Vernon (1774 - 1849) and with a bust of Samuel Johnson and his art collect bequeathed to the nation.

Mrs Esdaile was rather unkindly, very scathing about the 'incredible inferiority of the drapery'
She didn't like the socle either describing it as an hideous circular foot.

Currently on the staircase at Beningbrough Hal, Yorkshire

There is another later version of this bust by Hodges Baily at Woolsthorpe Hall, dated 1849.

Posted by David Bridgwater at 10:18